Popy released a Daitetsujin 17 Jumbo Machinder in 1977, but your average collector is much more likely to own this Taiwanese bootleg than the much more expensive original and you can count me among them. I'd love to have the real deal, but for the time being, this guy will have to do. This toy has affectionately become known as the "Disco Daitetsujin 17" (or just D17, for short) due to the hilariously loud stickers on it. And since the same company made a bootleg Giant Gorg Jumbo, that toy has assumed the same nickname, deserved or not. 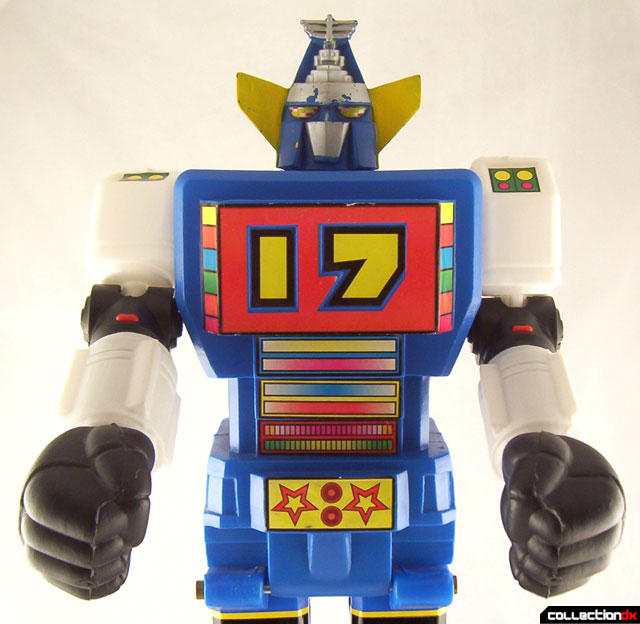 Now, as I said, I have no original D17 to compare this to, but just by looking at this and knowing the high-quality one expects from Popy, I think I can confidently say that this one is lacking refinement. The plastic feels cheaper and has all sorts of bumps all over it. The paint on the head is not very good either. 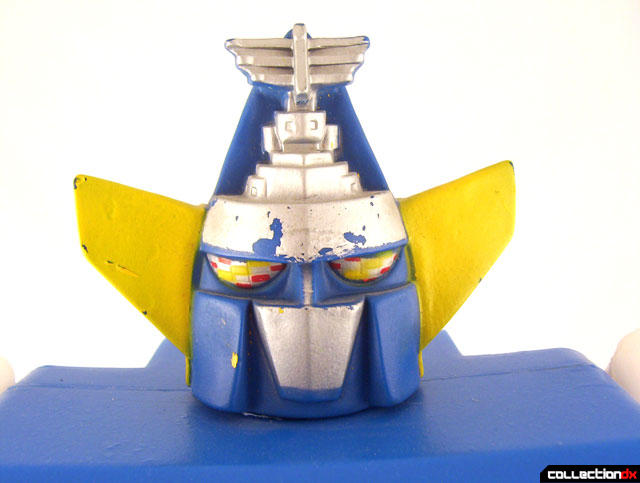 One problem that is very common on these is that the springs used in the firing fists are too strong and crack the tab on the fists, which then fire off on their own. Fortunately, it's pretty easy to just unscrew the arms and remove the springs entirely. The fists will stay on ok and it'll still display well, without it attacking you unexpectedly. I kid you not, I literally got hit in the head with a random flying fist just walking by this thing one time. 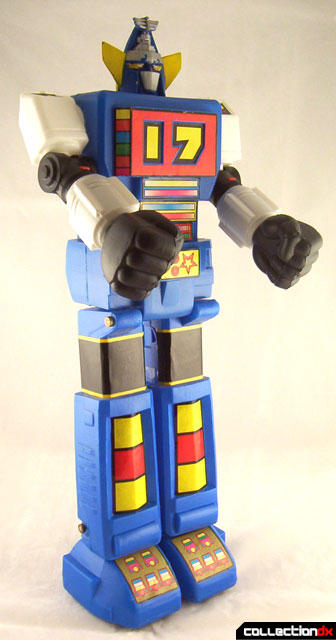 Even though the quality is not up to par, the toy itself did come with the same features as the original, including the aforementioned launching fists. Additionally, the toy can transform into a ride-on fortress. It's a bit of a silly gimmick (like most "transforming" Jumbos) in that you just bend the ankles back and the legs forward and add the tower to his back and an extra set of wheels between its legs. 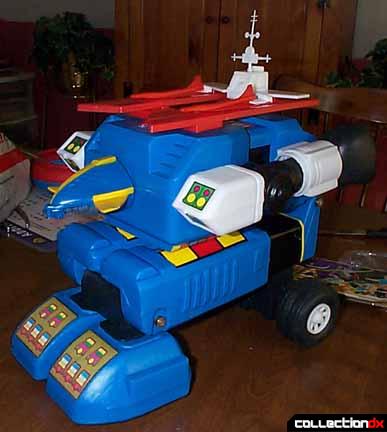 I guess it's neat that they maintained this feature, but on my specimen at least the toy has a tendency to lean backward a bit because of the joint at the ankles. And the seam at the hips where the legs bend doesn't match up quite right, which makes it look a bit awkward from the side. Personally, I'd rather have a more stable toy than a gimmick I'll never really use. But maybe the kids in Taiwan liked it. The artwork on the header card sure seems to suggest that they would have.

And yes, this is one of the very few Jumbos to have been packaged in a huge bag with a header card. At 23" tall, I can't imagine there are bigger toys out there sold bagged.

This toy was released twice. Although neither version has a manufacturer name or date on it, the general consensus was the first release was in the 1980s, with the second in the 90s. In fact, I think this version was being cranked out even into the new millennium, causing it to be the far more common of the two. Later releases came with just the robot/wheels and not the wings and tower. If I remember right, the factory had a bunch of the robots made but stopped production without ever finishing all the accessories and the overstock was sold off anyway. I got mine during this time so that's why mine is incomplete. (JoshB has pics of his old complete one that he contributed to this review.) Most that you see on eBay these days are like that.

This release featured red wings, while the other had green. Furthermore, and this may be hard to believe, but the green wings version actually came with stickers that looked even uglier than those shown here. Unfortunately, it's been years since I've seen one of those for sale, I don't have a picture saved and I can't even remember what it looked like. But I remember thinking it was hideous. Just awful. (And of course, now I really want it!)

Fortunately, for you collectors who are more discriminating than I am, you'll sometimes see sticker sheets for sale on eBay that reproduce the stickers from the original Popy version, so that you can make it look much nicer. Tempting, but for me, I like to keep all my toys in their original condition, regardless of how much of an eyesore they may be. 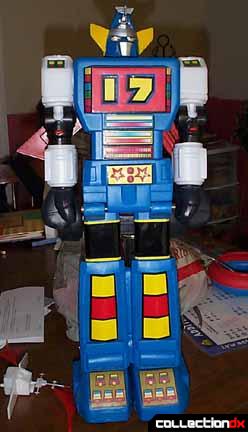 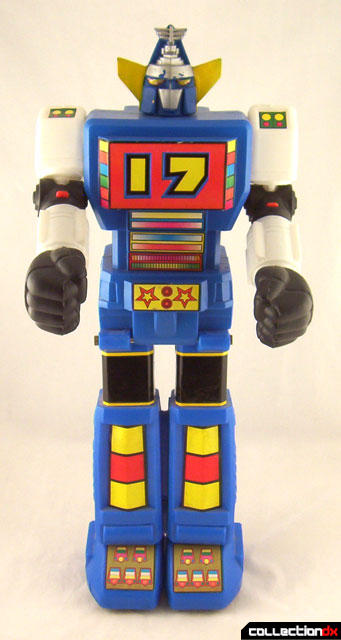 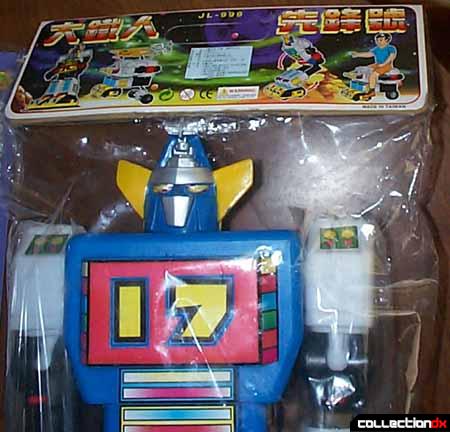 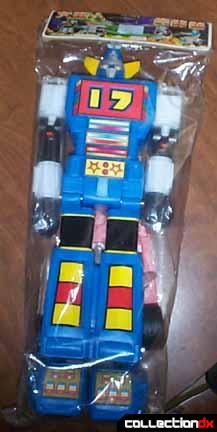 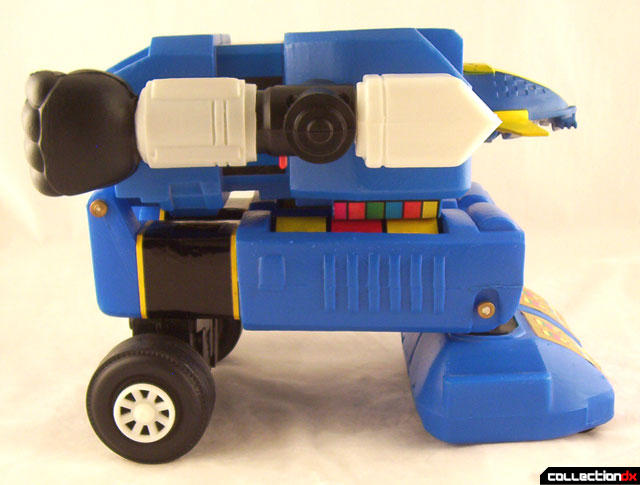 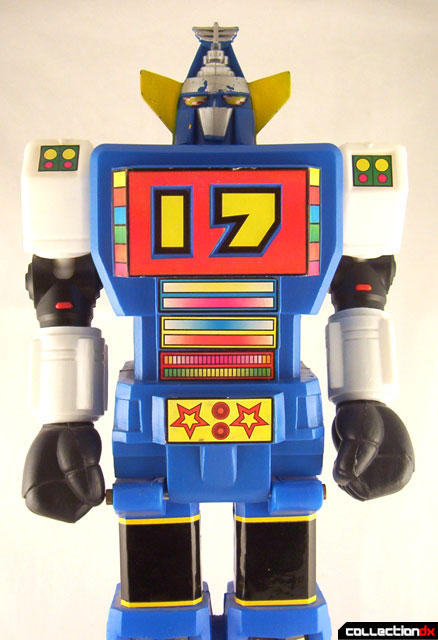 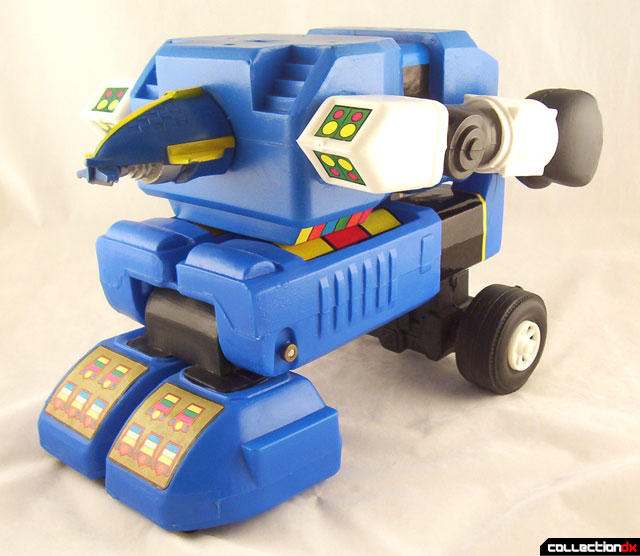 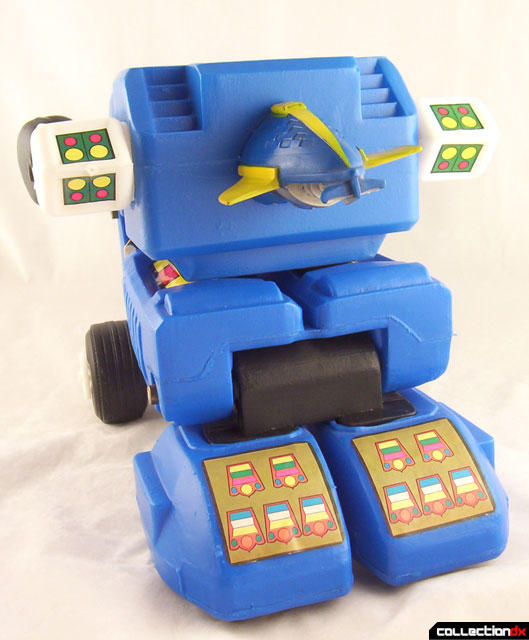 The first ones from the 90's had all of the accessories. Then around 2000-2001 they stopped showing up at all in Taiwan. I called my contact in Taiwan to see if he could get more and he drove out to the Bootlegers factory and asked them. They said that they had stopped producing them, but that they had 30 left that did not have wings or planes that launched from them. Machindershop bought 22 of the 30 that they had. I had to wire transfer the money to Taiwan (my bank thought I was smuggling drugs)and I ended up with 22 of them in my living room! (I have a pic somewhere?)

Cool, Brad, thanks for clarifying my fuzzy memory. I seem to recall getting a great deal on that lot, too. Something like $30 a pop for these guys, wasn't it? Btw, do you happen to have a picture of the alternate stickers?

Though they may have had only 30 when you contacted them, I'm inclined to think they must have had even more in that condition. I still see them popping up on Ebay, and even both Yahoo!Japan and Yahoo!Hong Kong auctions, but always with the bag and wheels and no wings, planes, etc.. As you can see in the Ebay link above, someone's got one up now, a complete green wings version.....but with those old ugly stickers stripped off! Gah! I'd have totally bought it if it still had the original stickers.. :( As it is, I'm a bit surprised to see it has bids at $200.

Oh, one last thing. Last night, Sanjeev told me that the repro Popy sticker sheet he got off of Ebay ended up peeling right off! I guess it didn't stick well to the cheap plastic, but he hasn't yet tried to re-attach it with any adhesive spray or anything.

I spent way too long last night looking for a pic that I had showing both versions side by side and I couldn't find it. At one point I had both, but they were sold along with everything else. I have since reaquired a red winged version (minus the wings..ect) off ebay of all places. I believe that Tom has one of the green winged versions.