Home » About » About CollectionDX

The goal of CollectionDX is to provide reviews, news and information from the world of Japanese Toys, Action Figures and Pop Culture. Although our content focuses on Japanese toys, it really comes down to whatever we think is cool at the time.

Back in 1999, I started a small on-line store in my basement called CYBERTOYZ. It was mainly to supplement my collecting habits, but I quickly found out that I was not cut out for the world of retail toy selling. I sold the domain in 2001. 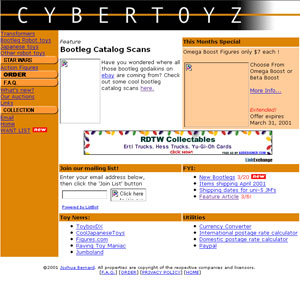 I was happy to be out of the business of selling toys, but I missed the aspect of cataloging them. I thought, for my next experiment, I would make a web site that would basically be a gallery of my toy collection. I thought it would be good for insurance purposes. Thus, in 2001, CollectionDX was born. Initially, I had collections of all kinds listed - from Robots, to Star Wars, to Barbie, but I decided to just focus on what I like. 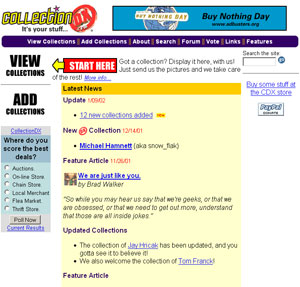 In 2003, with the help of Russell Cox, I switched the site to a rudimentary content management system. We began to solicit advertisers, and at this point, we were able to cover our operating expenses. 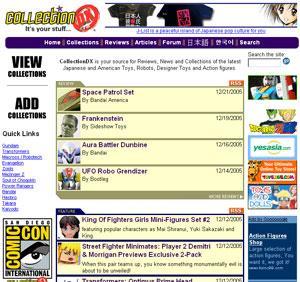 In 2006 we moved to the open source Content Management System, Drupal.

Once we had the ability for users to register and comment, things took off. Our membership grew, and so did our traffic. During this period we produced original toys with Kaiju Big Battel and Onell Design, and Josh co-wrote a book. New contributors came on board, and it was in 2008 a partnership was formed, and CollectionDX LLC was registered. By 2009 we had outgrown our server, and our software was aging rapidly. Frequent downtime plagued the site so a plan was formed. We would upgrade. CollectionDX V2 as it was known to staff members was shut down to new content in October, 2010. Rising in its place was a new and improved CollectionDX, with increased speed, stability, and a host of new features.

In the coming years, we hope to continue to grow and bring you the best coverage in Japanese Toys and Action Figures. We will be rolling out new features all the time, and we are always looking to hear what you think about CollectionDX. We are always looking for people to contribute collections and content to the site. The CollectionDX family is always expanding.