At this point, I'm fairly satisfied with the FAFs I have, and I feel that the grand adventure is beginning to wind down. I have a big enough backlog that I can keep cranking out reviews, but I have most of the ones that I wanted, and there are only a handful left that I want to seek out. Even so, sometimes I stumble across something for a price too good to pass on, and it's because of those kind of surprises that this next review will cover the second to last of the FAF line, Compatible Kaiser.

The story of Compatible Kaiser is a little complicated, so I'll try to do this quickly. Like the Gespenst, its origins lie not in Super Robot Wars but in its sister franchise, the Compati Hero Series. Kaiser first appeared as Compati Kaiser in The Great Battle 4 for the Super Famicom, a combining giant robot piloted by the incredibly bizarre team of Kamen Rider ZO, Ultraman Powered (from the American produced Ultraman: The Ultimate Hero), V2 Gundam and Fighter Roar, an original Banpresto character and series mainstay. Later on Roar and Kaiser cross dimensions into the SRW Original Generations universe, which ends up greatly damaging both of them. Kaiser is rebuilt into Compatible Kaiser, which is a complete re-imagining of the 16-bit incarnation (You can see a picture of the Compati Kaiser, as drawn by the original designer M Ganzy here). Eventually it unlocks its true power and becomes the G Compatible Kaiser. That last bit is noteworthy because like quite a few FAFs, they never got around to making a figure of the much cooler upgrade mech. Annnnnd that's my egg timer going off.

The packaging is a little underwhelming, as the last two FAF releases reused the same box. There's no art on the back of the box, and the Compatible Kaiser label is simply a sticker. 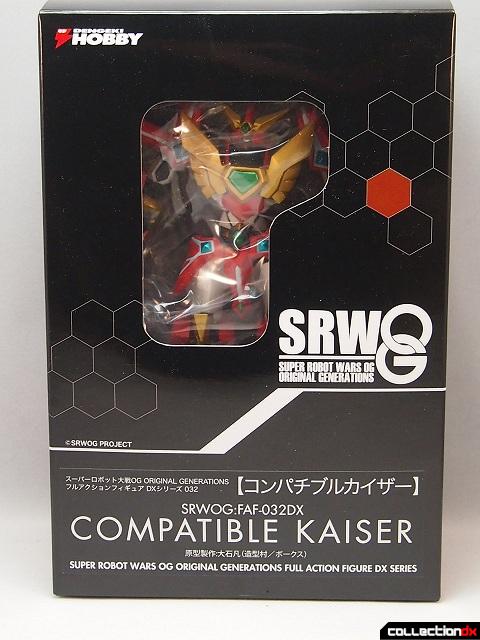 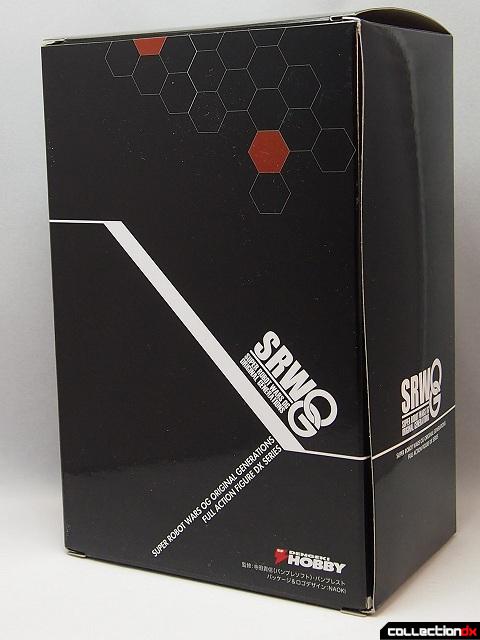 The box feels a lot more insubstantial, and even the glue holding it together is barely doing its job. Also, all the logos on the front of the box have been removed save for Dengeki Hobby's. The only thing that gives a clue to the origin of the figure is a small "Volks" credit that appears on the name sticker. No glossy photo booklet is included either. I'll come back to this point later, but remember that this was a 16000 yen figure.

Once out of the package you have a very good looking, but very bare bones figure. 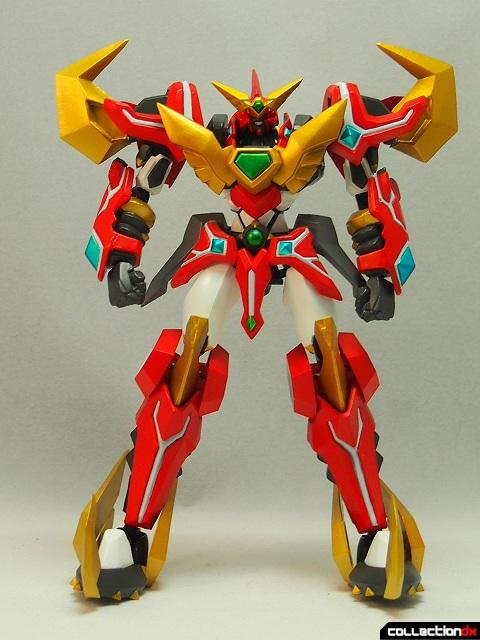 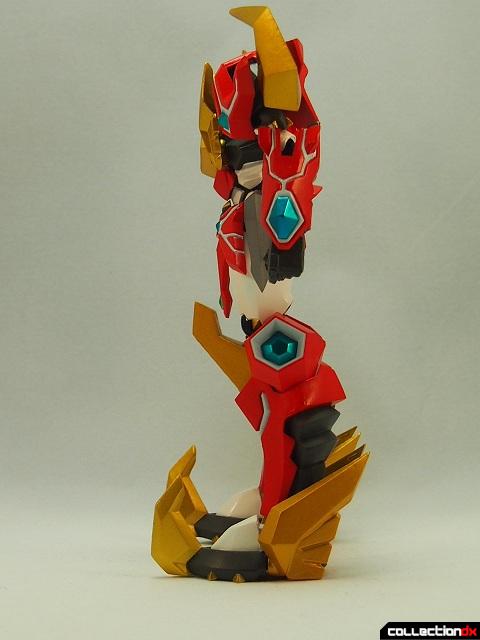 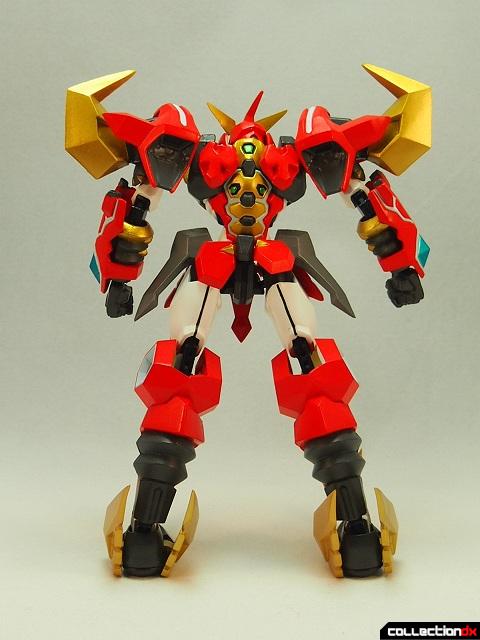 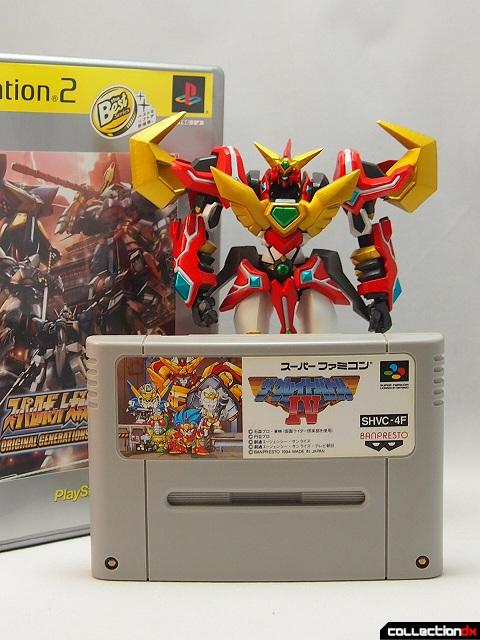 Two random, unrelated items to provide a sense of size.

For a series called Super Robot Wars readers may have noticed that there have been very few super robots in my reviews. This is entirely reflective of my own tastes, as I tend to focus as much as possible on the real robot side when playing those games, and the real robot FAFs are what I gravitated to. The Compatible Kaiser, designed by Masami Obari, is definitely a Super Robot. 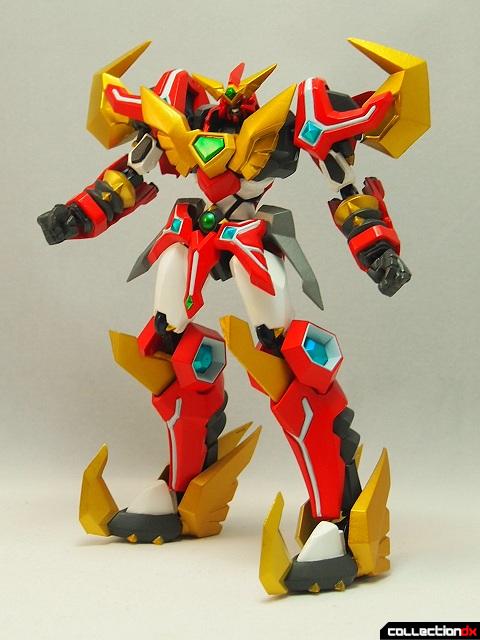 The finish is legitimately nice, and not just "for a FAF". The red and white color scheme is very sharp, and the metallic blue, green and gold paint applications look great. 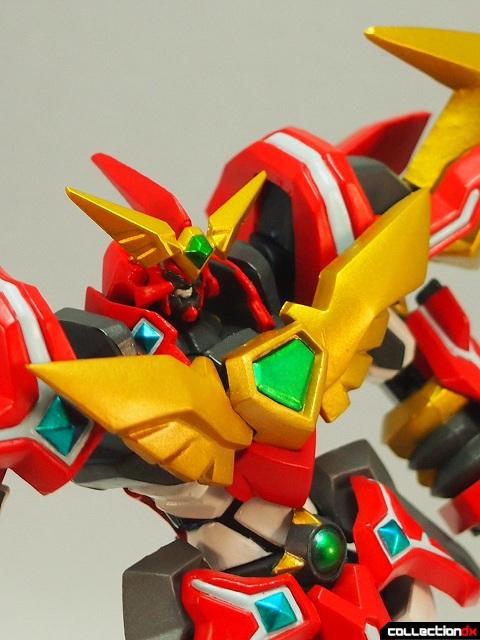 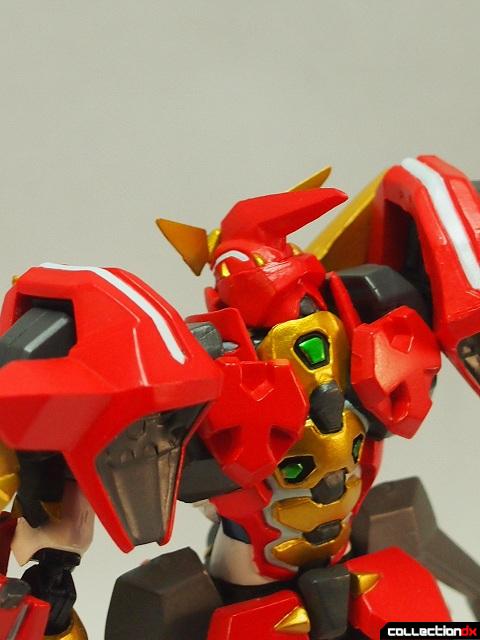 The figure is almost entirely PVC, aside from the joints, the crest on the head and the crotch/waist piece.

Much of the articulation has been completely revamped, and the result is a FAF that is a lot more dynamic than any of the figures I have, mostly. I say "much" and "mostly" because the mold is still interfering with the double joints on the limbs so the elbows and knees can't bend more than 90 degrees. Some things just don't change. 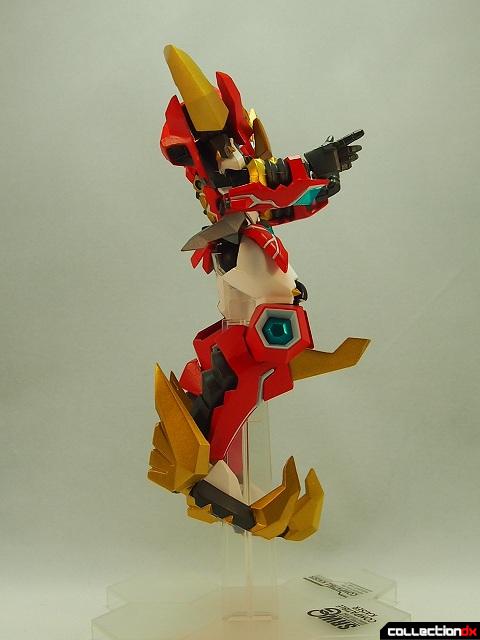 Same as it ever was.

However, the shoulders now house both a ball joint and a swivel, allowing the arms to roll forward. 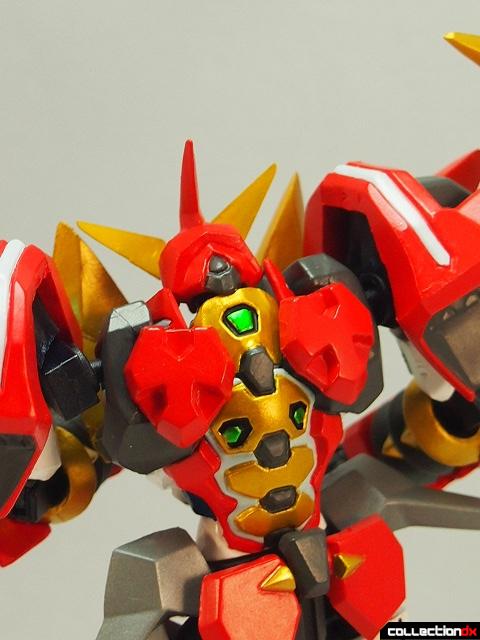 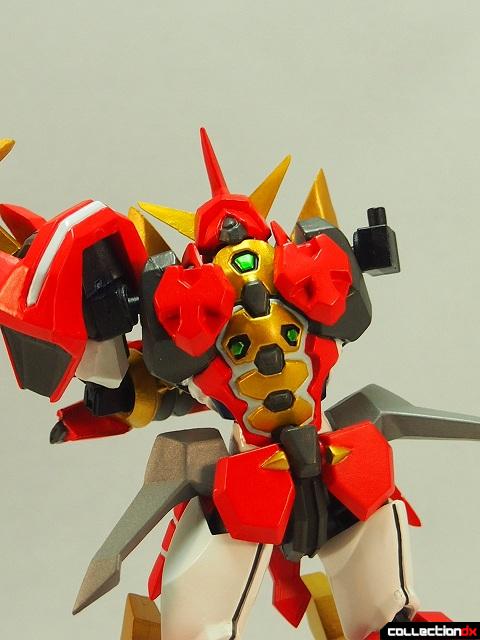 A hinge hidden underneath the shoulder guards give the arms some extra lateral motion, and both the biceps and forearms rotate freely. The head sits on a ball joint which in turn sits on a hinge, giving the Kaiser the most articulated neck of my FAFs, although that's not really saying much. The wings on the chest swivel up to stay out of the way of the arms, which is a fairly thoughtful touch. 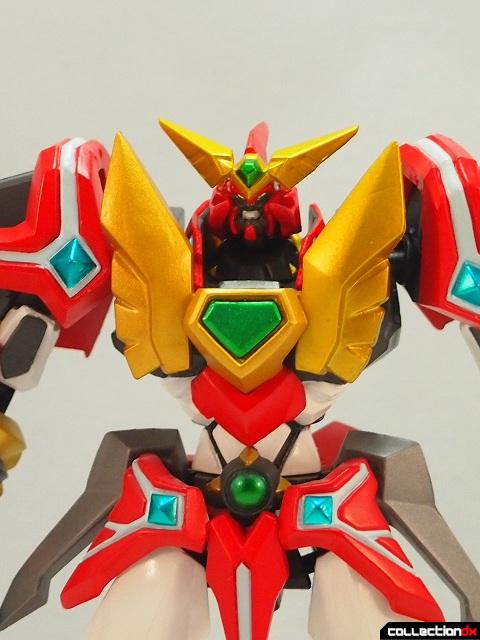 There's still no way for the arms to move across the body, but you can't have everything.

The waist swivel works without issue, something which can't be taken for granted with these figures. Each part of the skirt armor is ball jointed, and the smaller "flaps" on the front and back connect separately for extra movement. They still prevent the legs from having much forward range, and if the rear flaps are pushed flat they have a tendency to snag on the legs preventing any backwards movement at all, but this figure hasn't broken on me and I'm trying to be encouraging, dang it.

The same old limited movement in the knees is disappointing, but the legs have a decent range of lateral movement and an extra swivel joint in the hip connection allows the legs to rotate outwards. 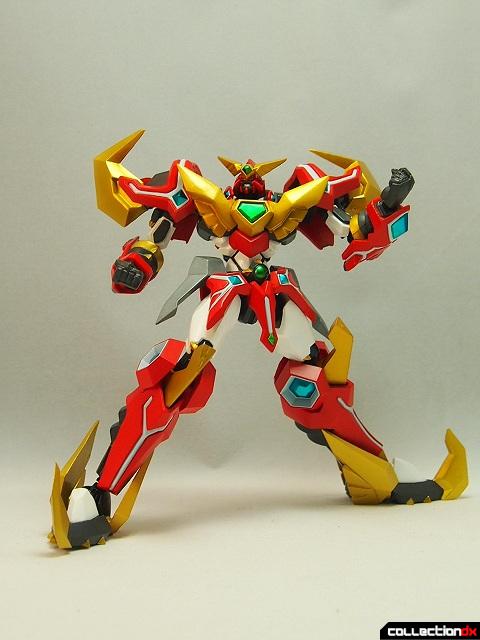 The feet are attached with the same double joints used on the rest of the figure, and if there's any one place on the figure where the term "extreme" could be used to describe the poseability, it's in the feet. 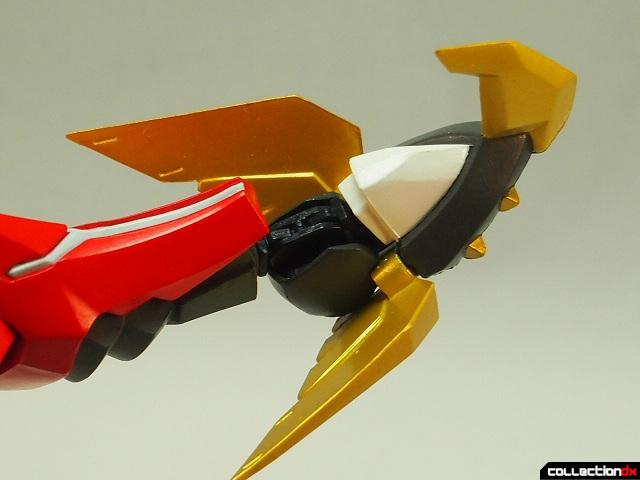 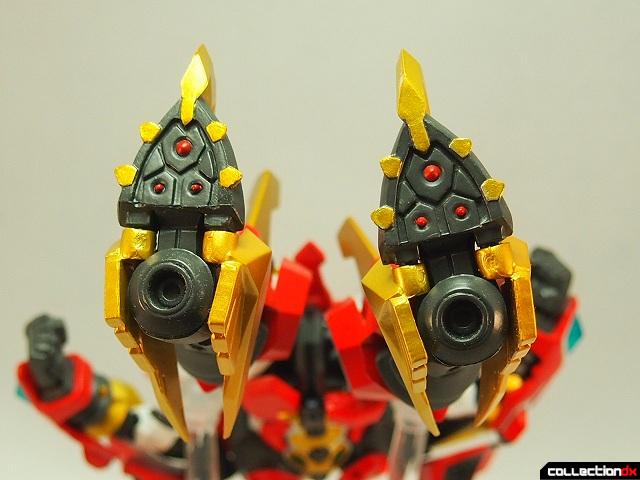 In addition to the wide range of movement the ankles also swivel, and the large wings on the heels are similar to the chest, moving to allow the feet to lay flat for some pretty wide stances. However, for more normal posing the placement of the detents in the feet can be troublesome; the figure has a pretty high center of gravity and the feet seem to want to lean slightly forward or slightly back, leading to a lot of falling over when I was taking pictures.

The accessory count for the Kaiser is almost insultingly small. If you watched the video you'd know that CK doesn't use a lot of extra weapons, but even so it only comes with two extra hands, a handle for the Kaiser Boomerang, and a handle for the Kaiser Boomerang with a hand attached to it. That's it. As a limited, mail away figure there's definitely going to be a luxury fee rolled into the cost, but the value proposition here strikes me as pretty one-sided.
Let's...let's look at the boomerang I guess.

The Kaiser Boomerang gets created by combining the gold horns on the shoulders, and the two pieces of armor on each hip. 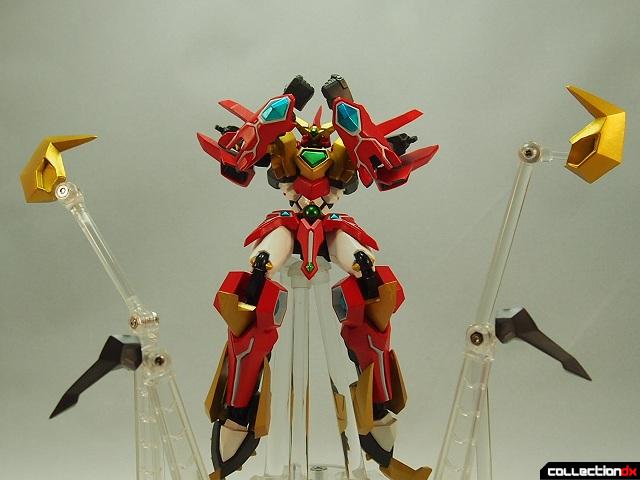 The horns snap on the handle securely. 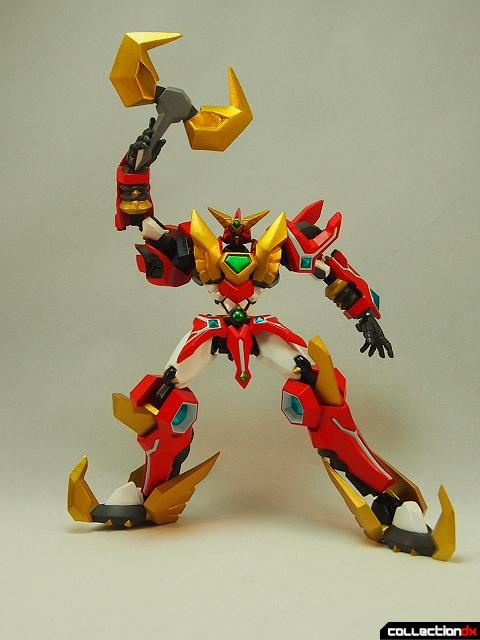 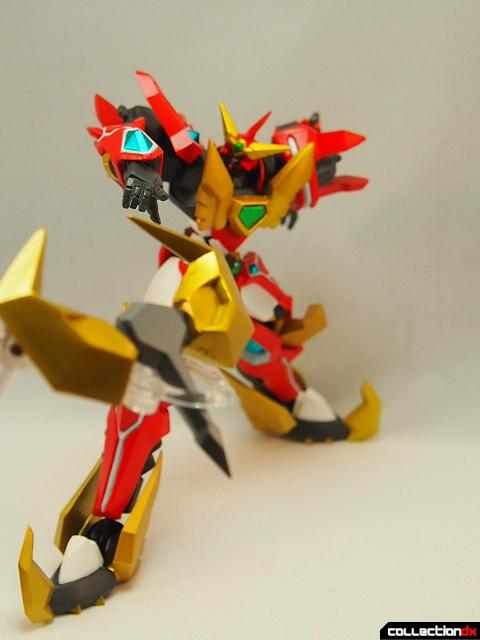 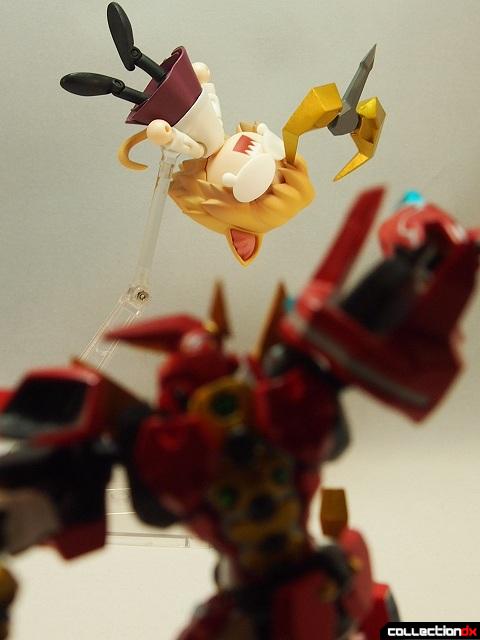 It's worth mentioning that the Kaiser's hands are ball jointed, which puts it among a very small minority of FAFs. An added bonus of having the hip armor removed for accuracy is that the legs gain a nice increase in their forward range of movement.

After that we're out out accessories and you have to start using your imagination.

The Compatible Kaiser launches his forearms like any properly accredited Super Robot with his Spiral Knuckle attack. 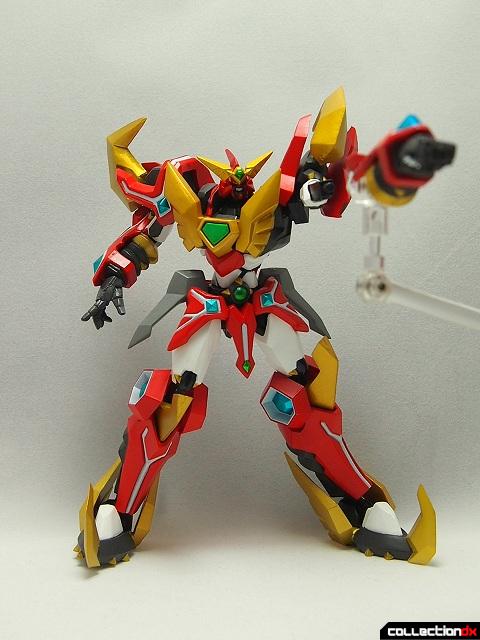 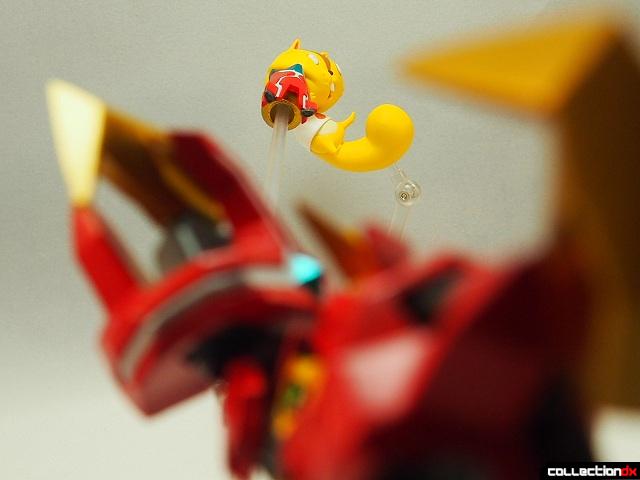 Or he can shoot a powerful beam from his chest with the Kaiser Burst, a projection of the initials of the Battle Force: the unbeatable combination of Kamen Rider, Ultraman, and Gundam.

Kaiser Tornado!! (there is no tornado involved in this attack) 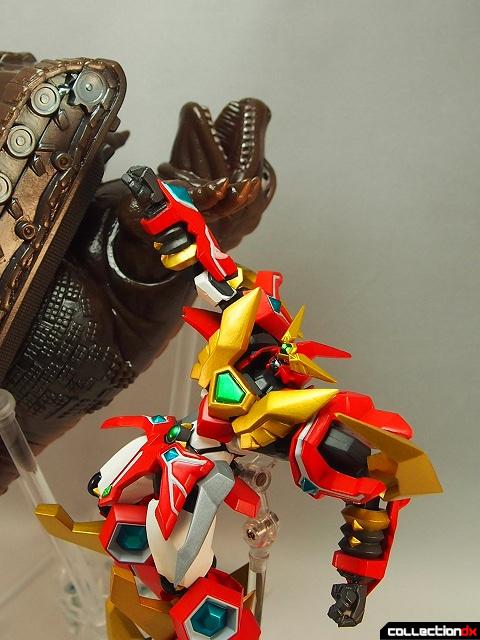 The figure also comes with a hexagonal late version stand, but my favorite touch present on all of the other later FAF stands (save the last two), the personalized insignia, is gone.

I'll say it again. Once the price of shipping and handling was added, this figure would have cost over 16000 yen. It's a good figure, and from an engineering viewpoint it might even be one of the best of this line, but the cost cutting measures and bare bones presentation combined with the insane price tag have to be seen as a strike against it. Even having acquired it for much, much less than the original price, these issues left a bad taste in my mouth. Such is the way of the FAF.

Next time: Valsione! (I realize that I have only ever actually followed through with these preview sections once before but I mean it this time)

5 comments posted
How disappointing, I loved

How disappointing, I loved the Compatible Kaiser in OG. It's a shame that so few of the truly excellent SRW Original Designs have action figures worthy of owning.

This review made my day. I remember playing Great Battle VI in my childhood and everytime the Compatible Kaiser was combined was awesome. His theme is one of my favorite musics to this day and it's simply the best "gattai" music there is. Good times...

I have the Kotobukiya kit of the Kaiser, and it's really nice, but it has some really small parts that are easy to lose and/or break, besides it uses a bright tone of yellow wherever it's supposed to be gold, so I always wondered how the FAF version was. Good to know heheh

Though I almost don't collect anymore, I still have wishes to someday see a SHF of Roar and SRCs of all the Compatible Kaiser versions.

Happy to hear that!

Usually after getting a FAF I try to find what the Japanese bloggers wrote about it. All (3) that I could find ended their review with "Maybe think about getting the Kotobukiya kit instead...".

With that price-tag, I was expecting this to be a combining figure, or include some part-swapping pseudo-combination gimmicks, or something. This is just embarrassing, even if it's a decent action figure.

I saw the Kotobukiya model of this thing, and from what you're saying, you do get a lot more for something you'd have to build!

This figure is pure Obari kinds of Awesome!