This is mostly Veef’s fault.

Recently, a Facebook conversation turned to Volks, that great House of Dollfie, and the other toys they had made (specifically, the ones that don’t wear clothes). Particularly, the thread focused on the Muv-Luv A3 line, which you can read all about here. During this conversation I was confronted with the realization that not only was I fairly familiar with an early Volks line, I had several of them. And I hated them. I hated them, and yet, I had continued to buy them. That conversation reignited something deep within me, and I started to hunt for these figures once again.
Please join me, as we explore Volks’ Super Robot Wars Original Generation Full Action Figure series.

I’m sure that most people reading this have at least heard of Super Robot Wars, a long running video game series that started on the Game Boy and has appeared on just about every home and portable video game console since. It’s well-known for featuring copious amounts of licensed crossover robot action, from Mazinger Z up through whatever had been popular on TV recently. In 2002 the first of the SRW Original Generation games came out, which sort of remixed the plotlines of several older SRW games into a single story, while focusing solely on the original characters from said games, removing the licensed franchises. Starting that same year, Dengeki Hobby Magazine, together with Banpresto started offering figures from the SRW games as mail order exclusives. Although it’s not clear from anyway on the packaging (more on that later), these were made by Volks.

The Sladegelmir, hereafter referred to as the Thrudgelmir, first appeared as a recruitable enemy unit in Super Robot Wars Alpha Gaiden, released in 2000 for the Playstation. Also making his SRW debut was the Thrudgelmir’s pilot, smiter of evil, fan favorite and connoisseur of long swords, Sanger Sombold (or if you prefer, Zengar Zonvolt).

The Thrudgelmir arrives on the scene in an unassuming shipping box, fresh from the Dengeki Hobby offices. 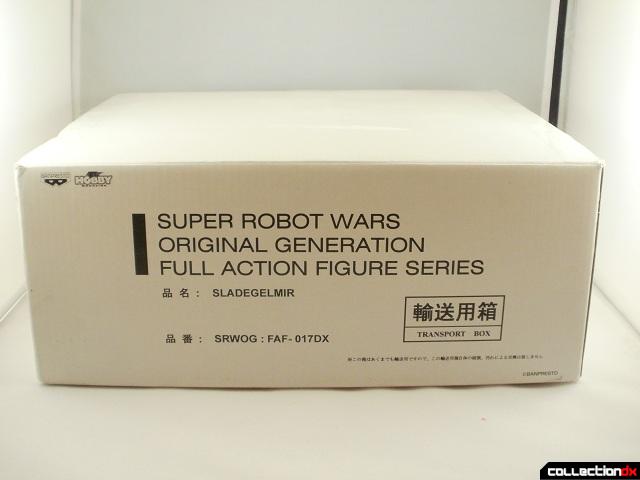 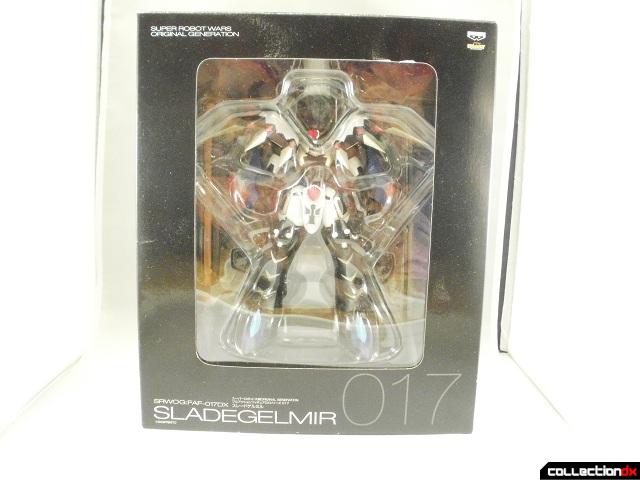 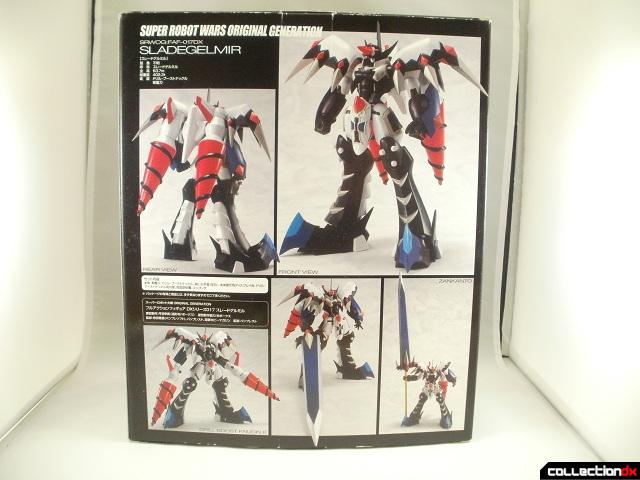 At first glance, it is easy to be impressed by the majesty of its packaging. Once freed from five layers of plastic trays, things begin to go wrong.

When you pick up an FAF, you’ll probably notice that it feels really slippery. Excessive amounts of mold release agent remaining on the figures combined with something about the paint used leave the figures feeling both simultaneously waxy and oily, and leave you with the urge to wash your hands after handling one. 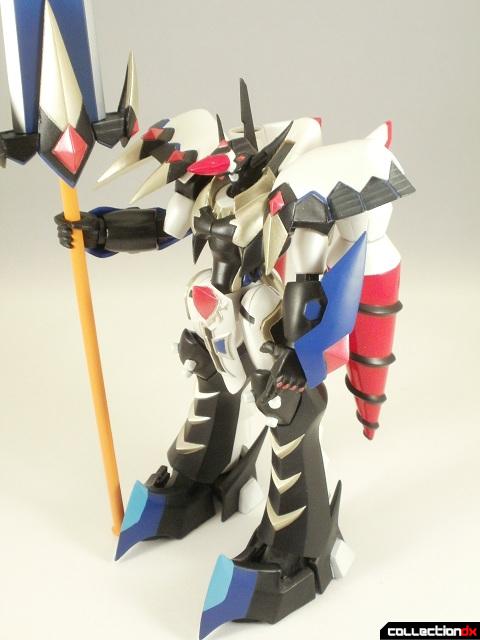 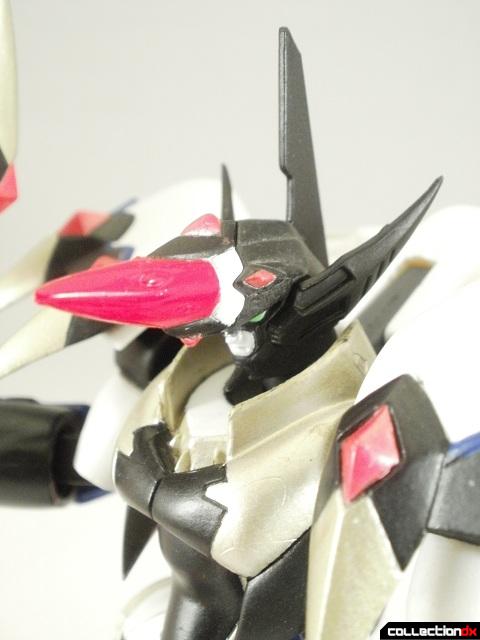 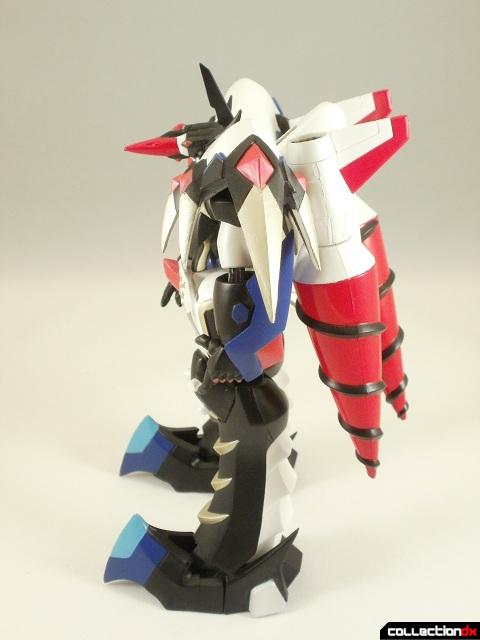 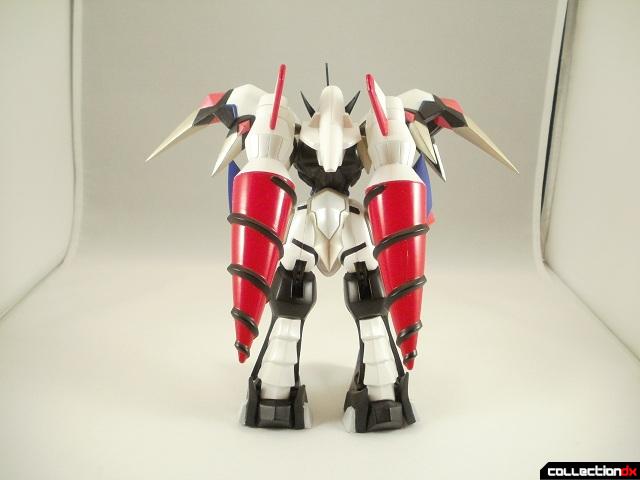 The Thrudgelmir itself is sculpted well enough in ABS and PVC, and it’s very pointy. From an aesthetic standpoint, the Thrudgelmir always struck me as a very spiky goose. It suffers from some paint issues in the forms of overspray and visible brush strokes. Poor paint applications are another common hallmark of the FAF line, and all things considered, the paint isn’t as bad as it could have been. The figure is about 7 inches tall.

Poseability is kind of a mess. Technically, there are double-jointed elbows and knees. In practice though, the forearm is molded over one of the elbow joints, and the Thrudgelmir’s center of gravity is so high and far back that any use of the knee joints at all immediately result in it tipping over backwards. 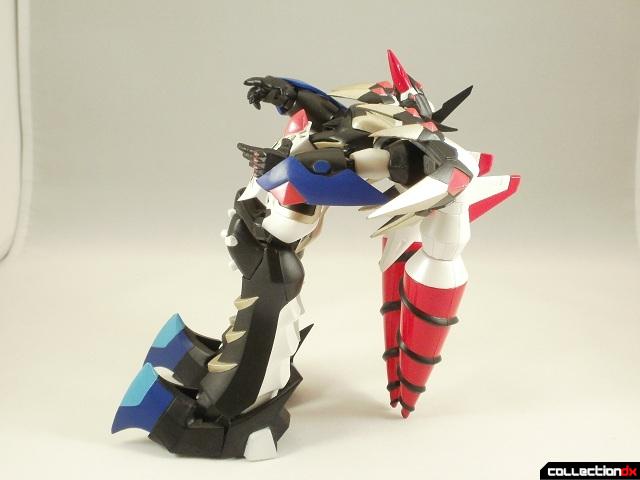 The Thrudgelmir’s drills save it further embarrassment.

There’s also almost zero lateral arm movement and the head connects by way of a straight peg, which leads to the head often trying to escape its body when it pushes up against the high collar on the torso. The feet are multi-jointed and very complex, but in a way that discourages the ability to stand. Even with the knees hyperextended, a light breeze would probably cause it to fall over backwards. There is a waist joint. Let’s move on. 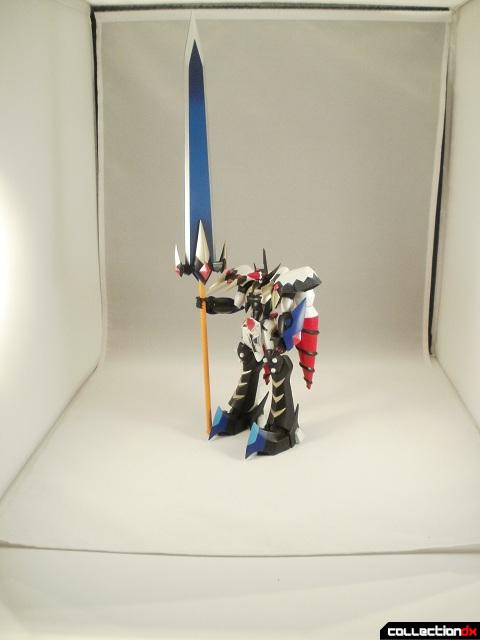 The Thrudgelmir’s most impressive feature is its massive Zankantou (literally, ‘ship cleaving blade’). An extra shoulder with the blade’s handle removed is included for game accuracy. Unfortunately, the joints on the arms aren’t quite up to doing anything very dynamic with it. A sort of stilted, over-the-shoulder pose is about as exciting as it gets. The blade itself is around 14 inches long. 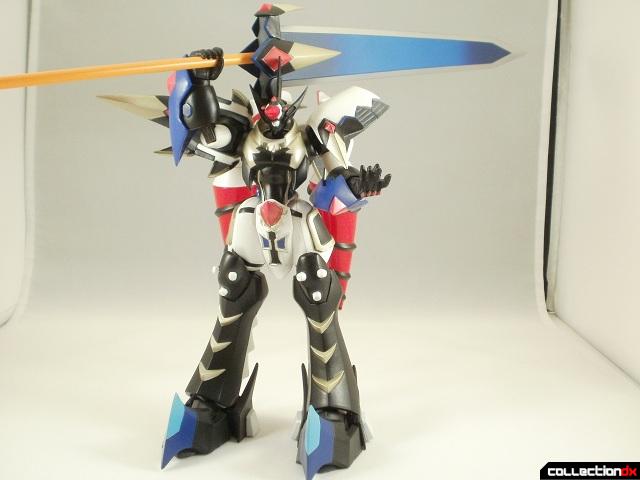 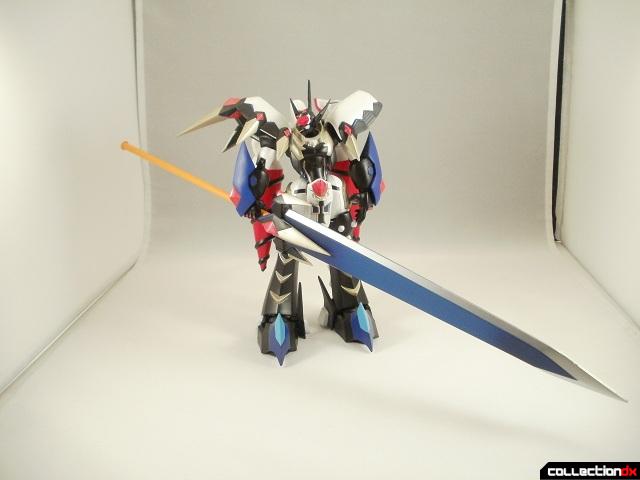 It still looks cool being held in a passive pose, so it’s not really a problem. Oh wait, the Thrudgelmir can’t really do that well either. Wait long enough, and it’ll most likely drop the sword. Along with its hand. 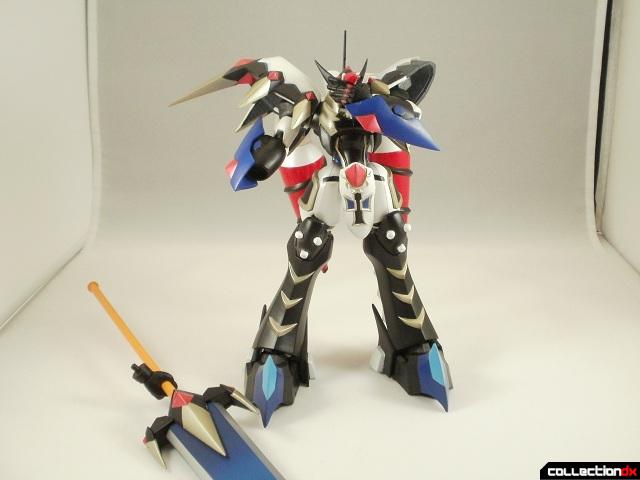 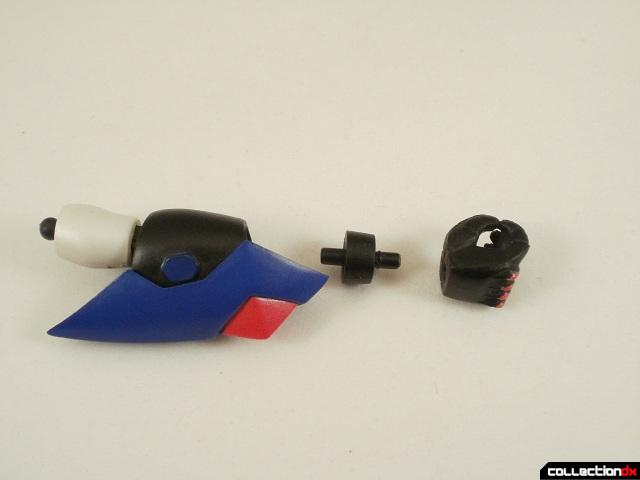 The Thrudgelmir has a rather strange way of dealing with its hand attachments. The hands themselves attach to an intermediate connecting piece, which then pegs into the arm. The hand is supposed to ‘lock’ into this piece with the help of a tiny ridge, but the ridge is so close to the base of the connector that it is incredibly hard to get the hands to fit properly. To top it all off, there’s no such ridge on the side of the connector that attaches to the arm itself, so the hands tend to fall out when any sort of weight is put on them, like say the weight of a very tall sword. 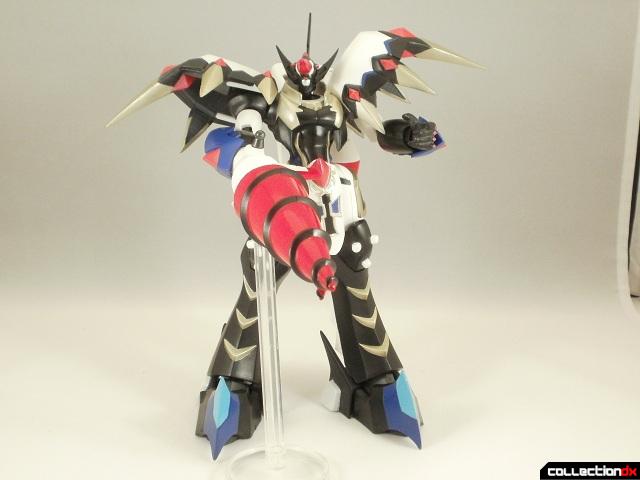 The Thrudgelmir’s drill ‘backpack’ is used in the attack ‘Drill Boost Knuckle’, in which the drills are attached to the arms and then fired, Rocket Punch style. After swapping some pieces and attaching another, different connecting piece, you can mount the drills on the arms. Only, this doesn’t really work either. Even though they are hollow, the drills are still too heavy for the arms to support, and even when pointing downward have a tendency to fall off. In recognition of this problem, a set of stands to hold up the drills were included, but even then the drills still tend to fall off. Not shown are the replacement pieces for the ball joints on the drill, which are really hard to remove. Let’s move on. 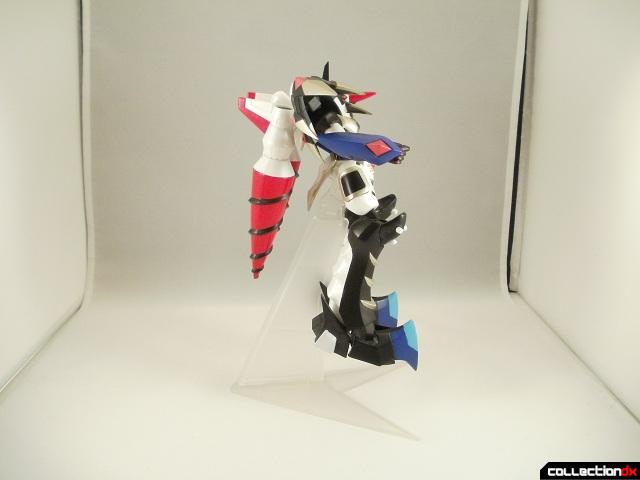 Like all FAF releases, a stand is included. The stand doesn’t really do a good job of securing the figure though, and as soon as you start bending the knees it starts to lean backwards again. Let’s not worry about the stand. 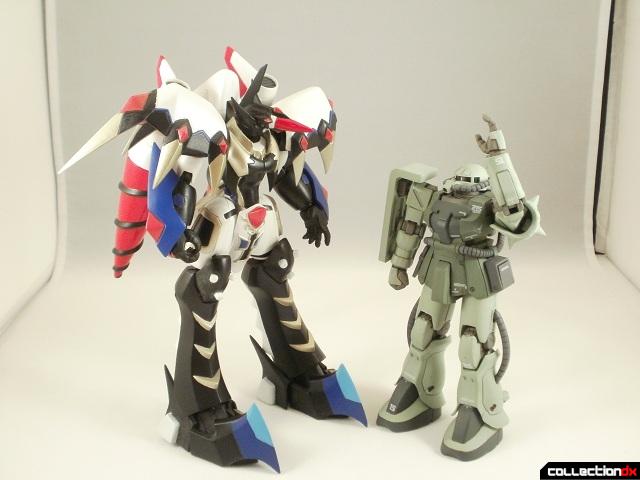 The FAF line is roughly 1/144 scale, fitting in with your Gundams or Kotobukiya’s line of SRW model kits. In this case, Zeonography Zaku II helps out with a comparison shot.

Even the Zaku is better at wielding the Zankantou. 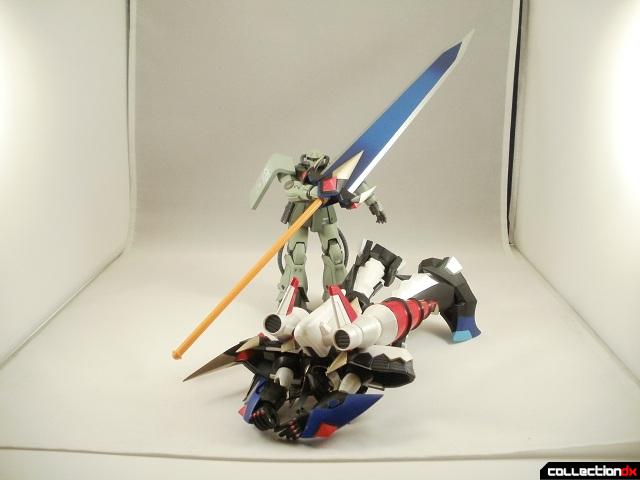 I mentioned earlier that this was a Volks toy. There are no Volks logos anywhere on the box, and the only mention of Volks is on the back of the instruction manual, credited for “Cooperation” alongside four other companies. However, the Volks logo would later be added to the box for later releases in the FAF line, and Volks would sell reissues of many of the early FAFs as web/convention exclusives. The Thrudgelmir was one of the FAFs that never saw a re-release, and it can still be expensive to find on the aftermarket. It’s also somewhat of a rarity in that enemy units in the FAF line are incredibly scarce. Even though it’s the only action figure of the Thrudgelmir that’s been made, you almost certainly don’t want it. Stay tuned, and I’ll tell you about more Super Robot Wars toys that you almost certainly don’t want.

5 comments posted
I can't believe I'm gonna be that guy...

Excellent review of a toy that's not very good. Maybe I should review the Kotobukiya kit of the Thrudgelmir too.

Anyway, I can't believe I'm gonna be that guy, but I do have to mention that even if most of the FAF line is 1/144, the Thrudgelmir is not 1/144 scale. It's supposed to actually be roughly 3 times larger than the standard Personal Trooper from the series at like 50 meters or what have you.

Still an awesome robot though.

I don't mind you being 'that guy' at all.
I tend to forget that the Thrudgelmir is basically just a Grungust, and in the first place SRW does a pretty good job of making you forgot about actual sizes. I never had realized that the Granzon is actually shorter than Cybuster until I reviewed it and looked up its height.

I didn't really have a place to put in in the review, but I wanted to note a couple things about this line. First, reviews, information, etc. on the FAFs are incredibly scarce, even in Japanese. Part of this is probably due to the first run being magazine exclusives, but it's bizarre. Even for the later releases there are probably only a handful of reviews for any given release, and some I've never seen reviewed at all.

Secondly, something that I found pretty funny was even amongst the Japanese bloggers, while they were scathing in their reviews, and evenly openly mocking these toys, they always, always had bought at least several of these. The FAF line sucks you in.

Volks is a helluva drug.

This figure line is really pretty with nice sculpts and vibrant colors, but the plastic is crappy. Little parts break off easily. I think the plastic on these isn't a standard type of PVC or ABS. Having personally broken two of figures from this line, the plastic looks like some kind of a rubbery foam concoction. The breaks aren't the standard clean snap type of breaks that you get with most plastics .