What can be said about Boris Karloff? This man was an actor clearly ahead of his time. Previously, I had only know him from his brilliant portrayal of this iconic monster from the 1931 film, Frankenstein. Recently, however, Nekrodave got me to check out the films Val Lewton did for RKO Radio Pictures. Karloff played prominent roles in many of these films, and he simply shined with the sheer depth and breadth of his range. His villains were dynamic and complex. Catching him in these films only enriches the experience of seeing him in Frankenstein.

And what a film Frankenstein is! Karloff is at once tragically human and chillingly inscrutable. Most of all, though, he is absolutely convincing in this role...even though he has virtually no dialog! The combination of Karloff's acting, the wonderful production value of the film, and of course, Mary Shelley's classic tale result in this--arguably the most famous monster movie of all time.

And Karloff's Monster is the subject of this review.

Along with Frankenstein's monster, Robot House produced the Wolf Man, the Mummy, and the Gill-Man (the Creature from the Black Lagoon). In 1992, the company was renamed to "Mike Company", when they produced a similar Dracula wind-up with a slighty different style of packaging. 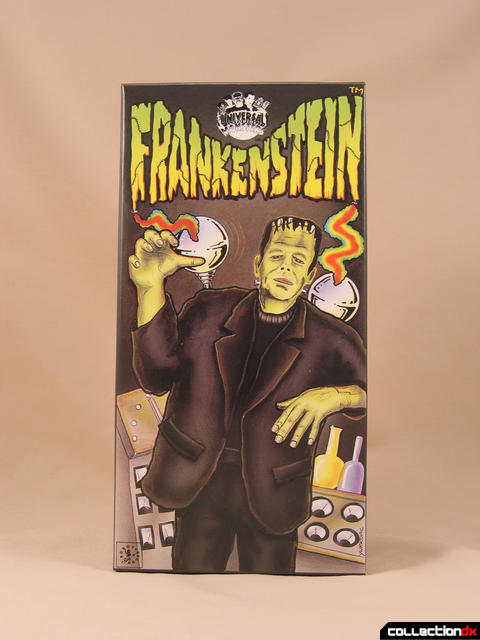 Not bad box art, but a tad cartoony. 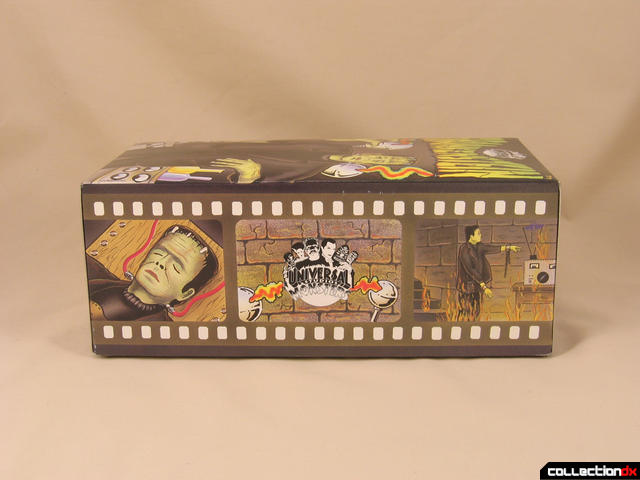 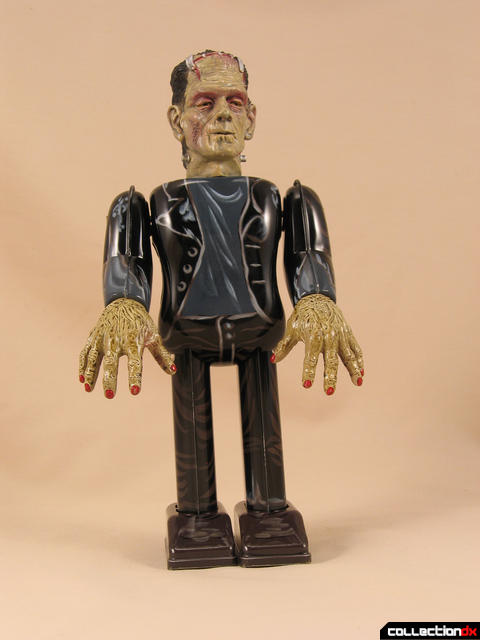 This is a good-looking toy--there's no question about it. This was my second purchase from this line of Universal Monsters tins by Robot House/Mike Company (right after the Gill-Man). I hadn't yet committed to getting the whole line at this point. I first wanted to have these in-hand before making the decision. Once I received this toy, it really wasn't a tough call.

The lithographed print on the tin is brilliant. The impression of the clothing is artful and creative, while not being needlessly hyper-realistic. The colors printed nicely and the color choices are excellent. The Monster's clothes look nice and disheveled and the overall look of the piece is very appropriate given the dark atmosphere of the film. 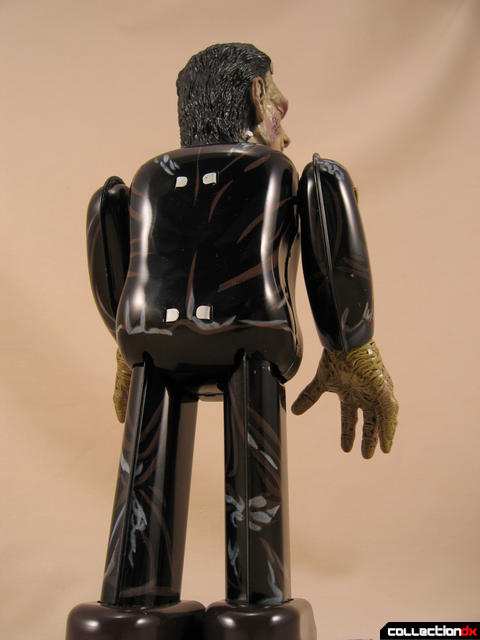 Aside from the lithographed tin body, we have the dry-brushed vinyl head and hands of this toy. The face looks pretty much like toy-perfection to me. I mean, that's Boris Karloff as the Monster! The black and white film has us perhaps more used to a deathly pale look for the monster, but I think the sickly green color they chose for his skin was a great choice. Also, a similar greenish yellow was used for the whites of his eyes; together, they contribute to his unnatural pallor. 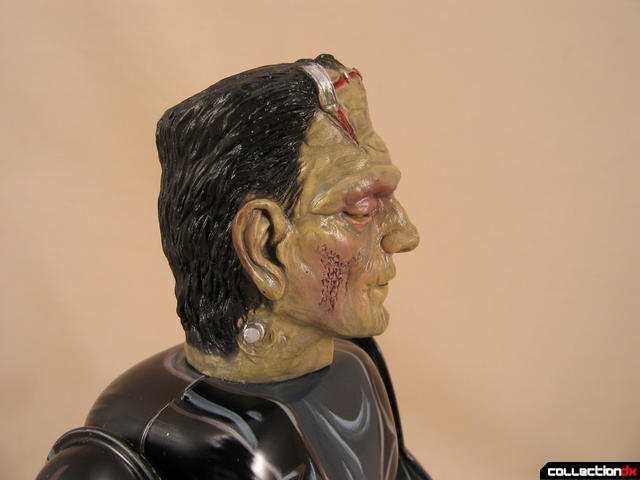 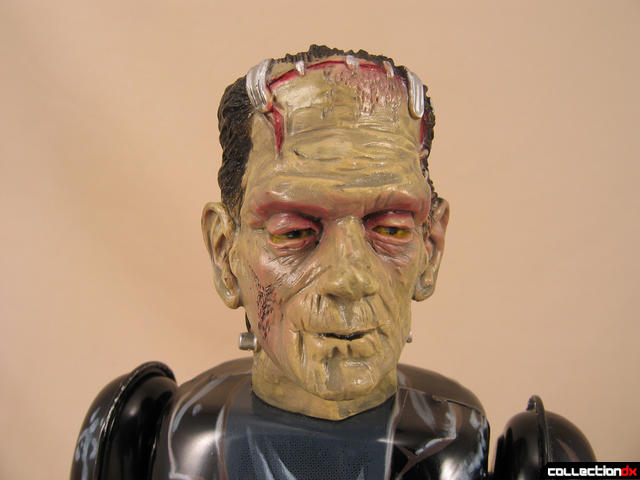 Next are his hands. Good, but not as well-rendered as his face. I like the sculpt a lot, but I think their are two problems with the paint application. First, it appears as though they're not dry-brushed, but instead, a very dark stain/wash was used. As a result, the small indentations in the sculpt appear like tiny black pocks on his skin. His hands didn't look that bad in the movie. Next, his fingernails. Umm...red nail polish? Really??? Hehe...well...these things happen! Just like the Mummy's awkward-looking eye, a detail brush, some acrylic paint, and a few minutes'll take care of that! 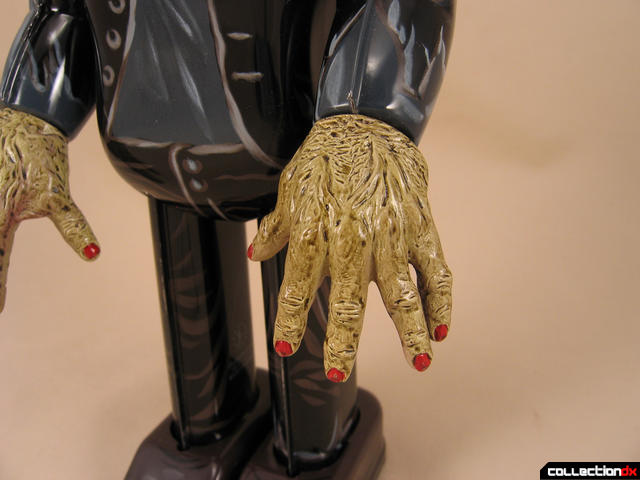 Still, these flaws are minimal when set against all the good points this toy has to offer. The quality of the tin parts' lithography and the sculpt and paint apps on the vinyl parts are top-notch. The design and color choices make for a great piece that simply looks brilliant overall. 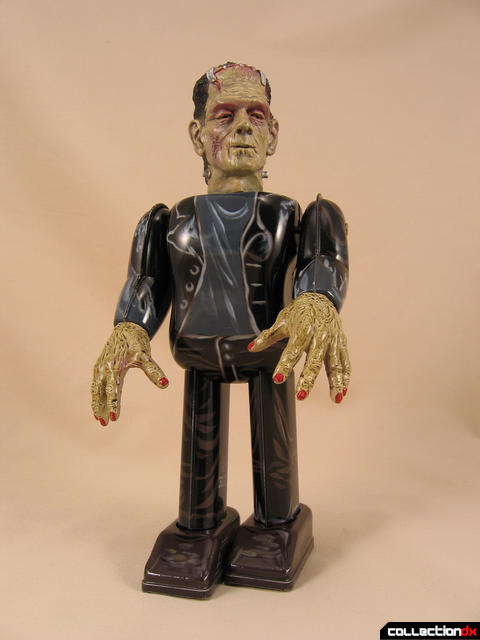 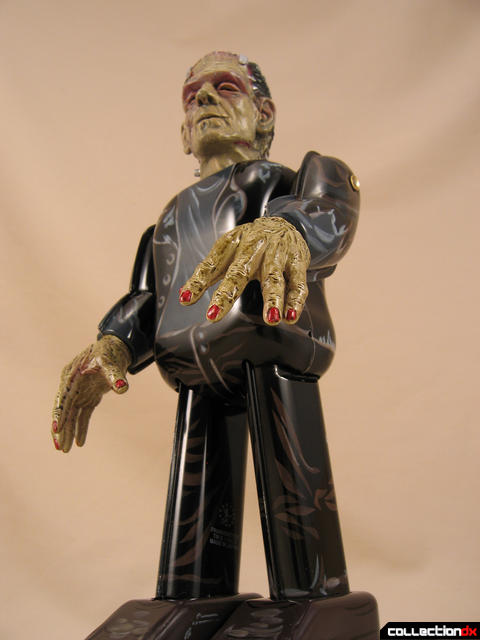 1 comment posted
Thank You so much for the background information :D

I always wondered what Billiken stood for when
I saw these type of wind-up toys. And now I
know thanks to you, Sanjeev!