Now, here's a little digression into film and classic monster history: this toy is not of the original Mummy!

Much like with many campy, mass-marketed horror productions, it certainly wasn't beneath a studio to rehash, rewrite, and regurgitate a popular screen icon for the sake of making the crowds cheer. Don't believe me? Look how many Frankenstein's are out there! ;)

The same is true of the Mummy. But here's an interesting case. The original 1932 film, The Mummy, showcased yet another cogent performance by none other than Frankenstein's own Boris Karloff. Is there any way to get enough Boris Karloff??? Probably not...but I digress...from my own digression...

Now, Karloff played the pharaonic Egyptian prince, Imhotep, in a tragic tale of cruel love. Though far and away the most frightening Mummy film ever, the inimitable Karloff plays a brilliant, but decidedly un-monsterlike villain. The next four sequels, however, were filmed 8 years later and actually deal with a different being entirely: the far more monsterous mummy, Kharis--the ever-living guardian of Princess Ananka. Confused yet? Well, it gets better!

The first of the Kharis films was 1940's The Mummy's Hand, which was arguably more humor than horror; in this film, Tom Tyler played the "first draft" of Kharis. The next three films--1942's The Mummy's Tomb, and 1944's The Mummy's Ghost and The Mummy's Curse--served to refine the creature...no doubt propelled along by Lon Chaney, Jr's takeover of the title role. Fresh off the set of 1941's The Wolf Man, the new star was ready to define yet another iconic monster.

Tyler's Mummy seemed an odd juxtaposition of physical traits. The corpse was supposed to be extremely well-preserved...to the point where two characters even commented on his nice complexion...just before he came back to life! Also, Tyler was a body builder in real life. In skin-tight wrappings, he made for a pretty athletic-looking monster! Still, his eyes were blackened out during post-production and the writers gave him a gait that was zombie-esque, at best. He was just too...healthy...for that--much like Karloff's short post-resurrection scene (still in his wrappings).

Chaney's creepier performance as the more consistently-undead(?) Kharis is the Mummy's depiction most resonant with folks. Though sorta relegated to being more of a hired goon--albeit, an undead one--Chaney's slow, inexorable beast marked the final refinement of the monster. By the time he took over, much more facial make-up was added. The decomposition effect was was really convincing--his right eye was entirely destroyed and basically appeared rotted shut. And since Tyler started the decrepit right arm bit (though it looked perfectly healthy!), they wrapped up Chaney's right hand so that it looked like an atrophied stump. Oh, and that zombie-esque gait? Chaney pulled it off with sheer brilliance!

It's this Mummy that stands out most prominently in the hearts and minds of monster fans of all ages. And he's the subject of this toy review!

Along with the Mummy, Robot House produced Frankenstein's monster, the Wolf Man, and the Gill-Man (the Creature from the Black Lagoon). In 1992, the company was renamed to "Mike Company", when they produced a similar Dracula wind-up with a slighty different style of packaging. 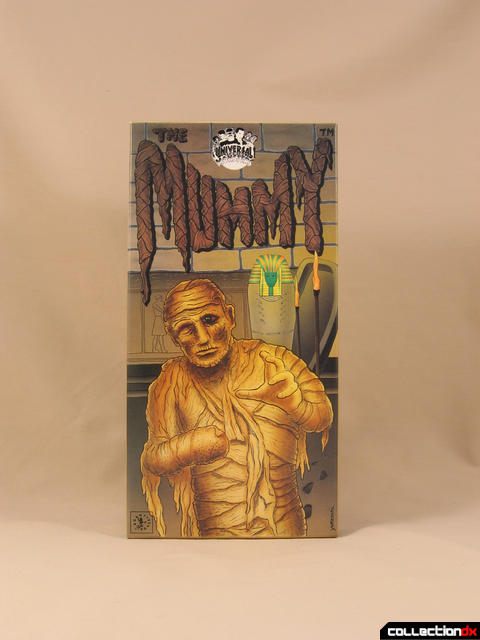 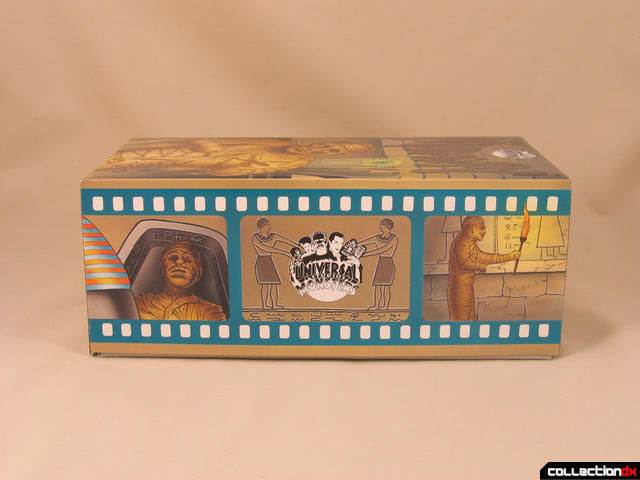 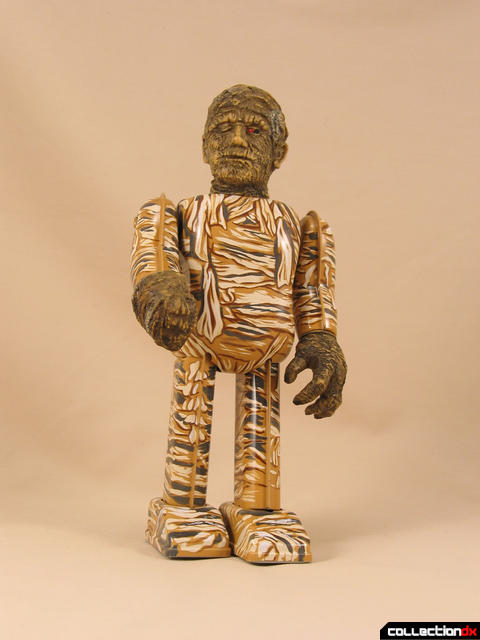 Isn't this piece gorgeous? The lithography on the tin is pristine. The style is wonderful: effectively conveying the "feel" of the recently-revived Kharis in his mummy wrappings, while not being overly detailed or needlessly hyper-realistic. I dig that a lot. 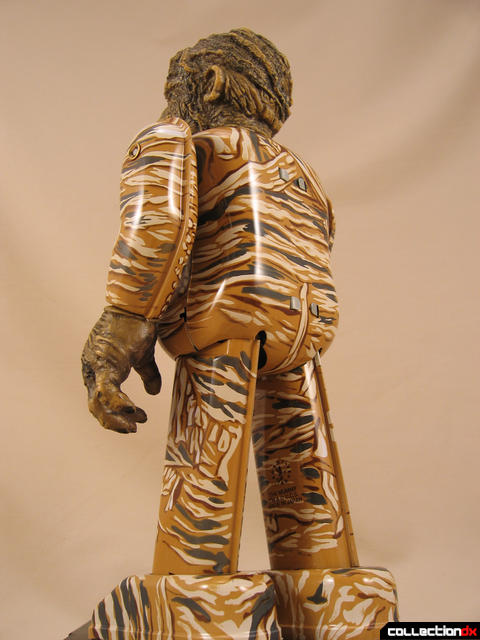 Besides the tin bits, we also need to discuss the vinyl parts: the head and hands. These parts are hollow and very lightweight, but they are also very stiff unlike your typical sofubi ("soft vinyl").

Similar to Robot House's Wolf Man, I find the face of the Mummy to be nice, but a little off. The surface detail is gorgeous and the dry-brushing with two shades of greenish brown is perfect. I think the hang-up for me is the eye. I kinda dig the sideways glance, but the red just doesn't go with the whole look of the toy--it just seems so out of place. Still, a detail brush, a little acrylic paint, and a couple minutes of work'll tidy that right up! ;) 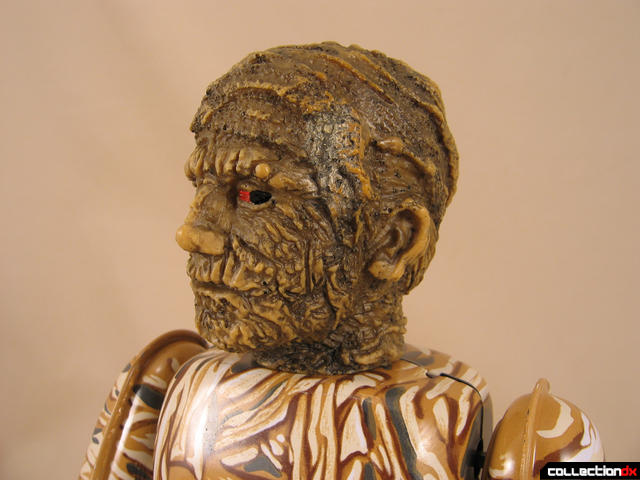 Next up are the hands. As with the other figures in this line, the hands for the Mummy are superb! Again, the sharp sculpt and quality dry-brushing combine gorgeously. 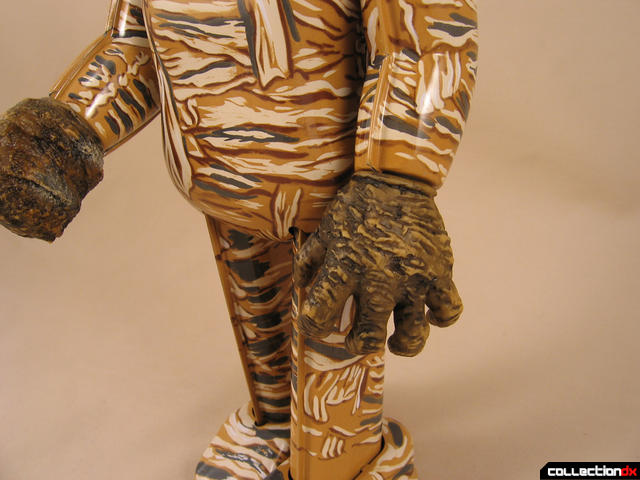 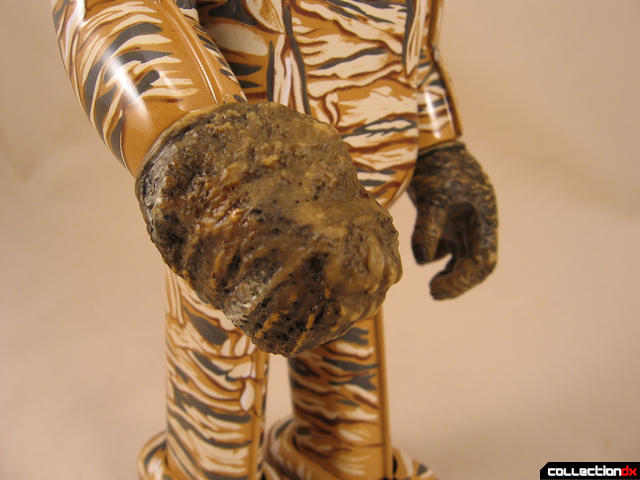 And not only do we have the strangling left hand, but we get the decrepit right hand from the later Lon Chaney films as well.

The piece looks great overall; the look and feel is excellent. On this piece, more so than the other Robot House/Mike Company monster tins, the head and hands look very different from the rest of the body. While the body is completely wrapped, the head and hands are bare. This stark contrast actually works very well with this toy. It boils down to the selected colors. Instead of looking great in spite of one another, the head and hands and the body complement each other nicely because the darker basecoat color and the lighter highlight color used for the head and hands are both used in the litho-ed print on the tin parts. And remember, color selection isn't automatic--this is based on a black and white film! 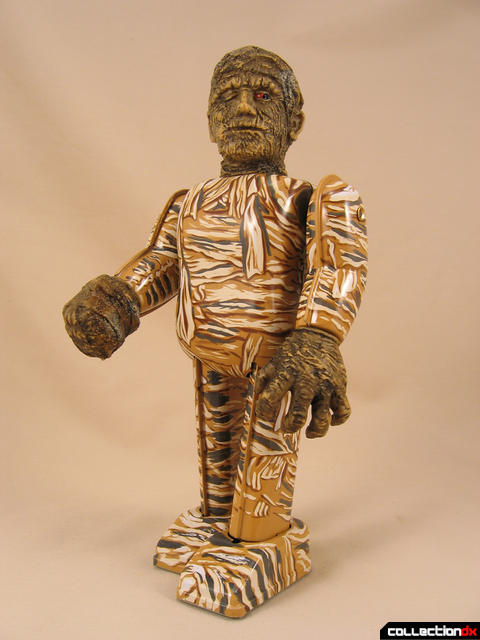 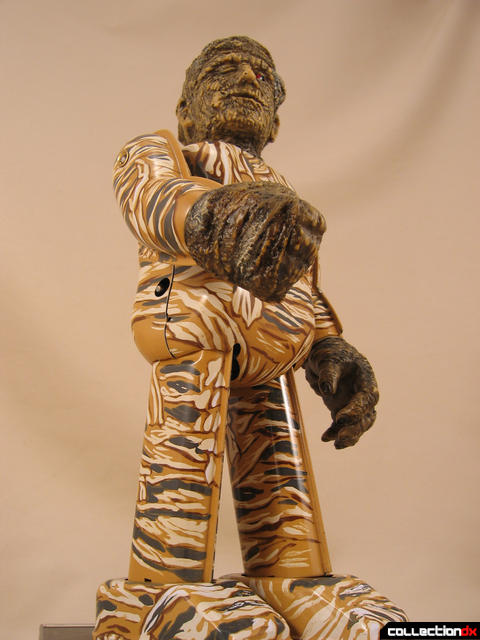