Anyway, being a Romania native, it seems Bela Lugosi was born to play the titular Count in 1931's Dracula. Lugosi had a pretty solid resume under his belt by the time 1931 rolled around (including having previously played the grand daddy of all vampires on Broadway some years before), but it was Tod Browning's film that not only defined his career, but propelled him into a cental position with Univeral Studios.

Besides his work for Universal, Lugosi has had some impressive roles like the Sayer of the Law in 1932's Island of Lost Souls, and some...not-so-impressive roles like the ghoul in Plan 9 from Outer Space! Probably his most acclaimed parts were those paired with Karloff...films like RKO's The Body Snatcher (1945) or the Poe adaptations, The Black Cat (1934) and The Raven (1935).

...But Lugosi's myriad roles aside, Dracula is the focus of this toy review!

The tin wind-up toy reviewed here was produced in 1992 by "Mike Company", a US-based Univeral Monsters licensee recently renamed a year earlier from "Robot House". I've been told by Jay at Robot Island, a dealer of fine tin wind-up toys, that Robot House was granted the license to the characters and then contracted Billiken Shokai of Japan to manufacture the toys. Billiken--perhaps more famous for their high-quality, realistic vinyl tokusatsu kits and figures--are NO slackers when it comes to tin. And that quality clearly shows in these toys.

Along with Dracula, Robot House produced tin wind-ups of Frankenstein's monster, the Wolf Man, the Mummy, and the Gill-Man (the Creature from the Black Lagoon). 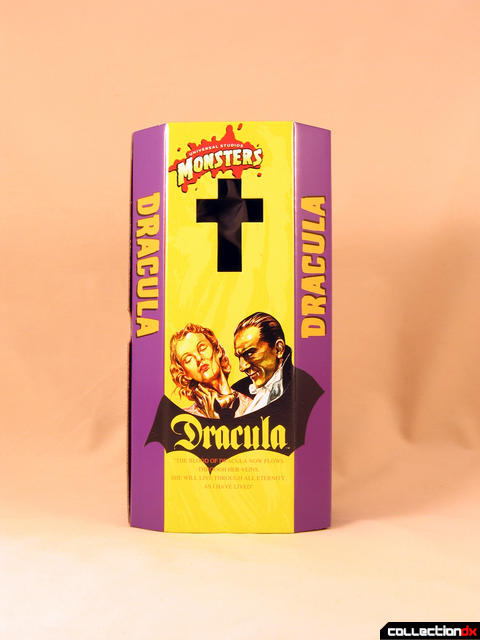 Killer box--though I miss the neat artwork from the previous releases. 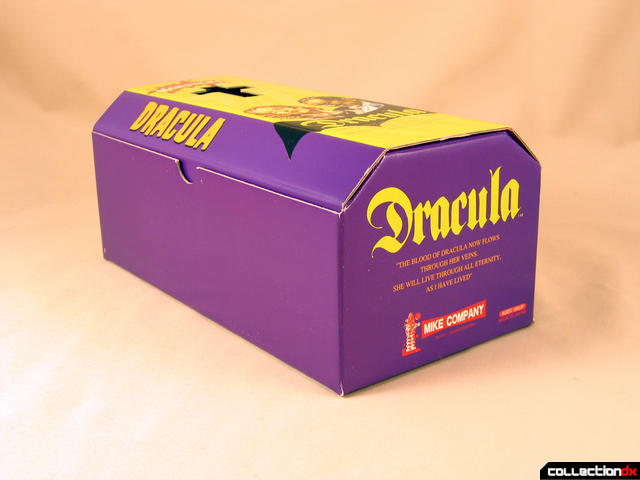 This box has a cool coffin motif and the cross on top is actually a cut-out, through which you can see the black nylon bag the figure is wrapped in. 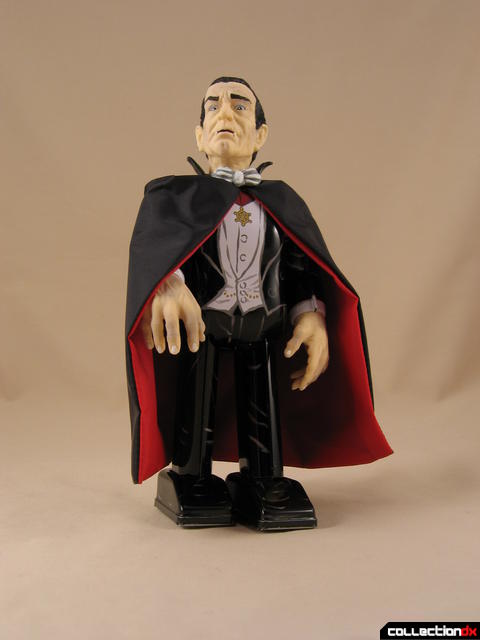 This piece is great, much like the others from this line. The lithography is top notch, even if a bit simple. It does a great job of conveying Dracula's dapper evening attire. The printing on the tin is flawless and works perfectly with the cape and vinyl parts.

And speaking of his cape, that's one part the other figures in the line obviously lack. And it happens to be gorgeous. It's made of two pieces of nylon (or some similar synthetic fabric): black on the outside and red on the inside. Toys with capes often turn me off because they're usually some awful fabric that is too stiff to drape realistically or has a fuzzy texture that otherwise makes the toy look like a toy. Alternatively, capes for toys are sometimes actually made from a piece of molded plastic or rubber...which admittedly looks great, but is obviously static and not very interesting. 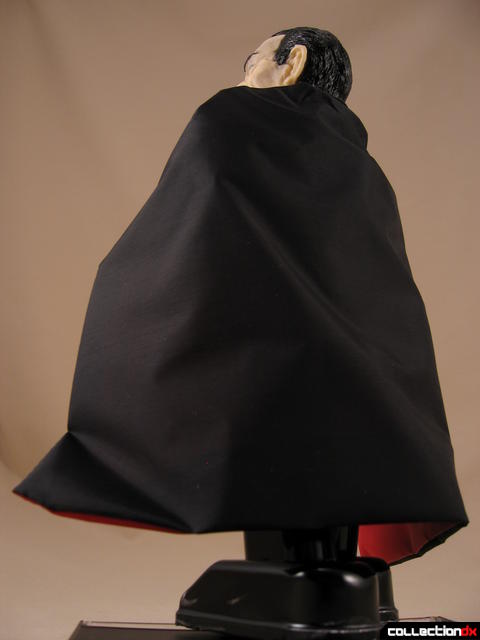 This cape, however, succeeds: the nylon is cut to drape and wrinkle in the right ways to look realistic enough, while maintaining a nice smooth sheen. It's tough enough to be handled without worry, but supple enough to move freely when the toy is walking. The only thing static is the collar, which is painted vinyl. 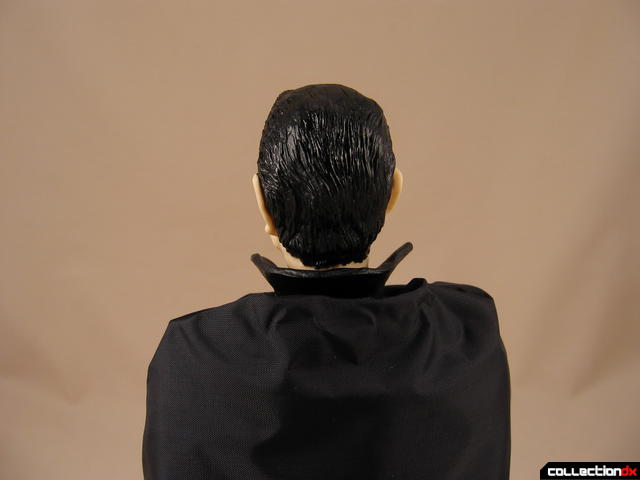 Next, the vinyl parts, themselves, are nicely rendered. The head and hands seem to be cast black vinyl with the pale white skin color painted directly on with no priming (well, perhaps a black primer). You can just barely see some black showing through in some spots on the skin where the paint is thin. This effect is actually really cool! It's very subtle, but it lends to the "undead" look. 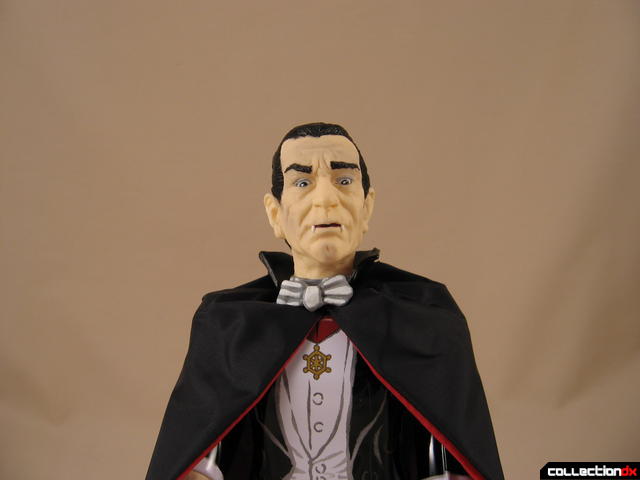 As for the sculpt of the face, itself, I dig it. It doesn't quite look exactly like Bela Lugosi, but it comes pretty close and looks good for a toy, in general. Lugosi's strong nose and wrinkes on his cheeks and chin come through nicely, but I think they could've done the eyes better. The eyebrows are a bit high (lending to a shocked sort of expression...rather than a menacing one). Also, I think the eyes should be darker and squintier...meaner-looking! Still, I'm not dissatisfied. 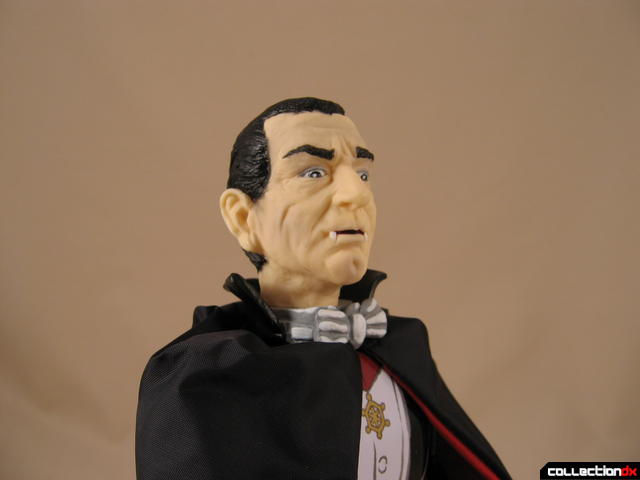 Next up are the hands. Just like all of the Robot House/Mike Company Univeral Monsters tin wind-ups, these are superb. Easily just as much care went into their sculpt as went into the faces. The detail is great and, again, in some spots where the paint is thin on the flesh, the black base starts to show through. This unevenness ends up looking very "realistic"...for a dead guy. Also, the ring on his left ring-finger is nicely-done. 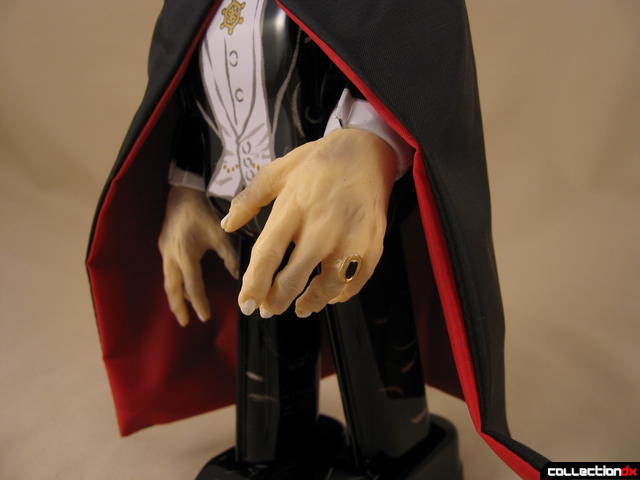 Again, this toy looks great overall. The dark colors and overall design aesthetic flow nicely between the vinyl parts, the cape, and the tin body. The simple style of the artwork on the tin complements the basic shape of those parts, but doesn't clash at all with the realistic sculpt of the head and hands. I also like how the bright red on the inside of the cape contrasts well against the dark body, giving it some visually-interesting definition. 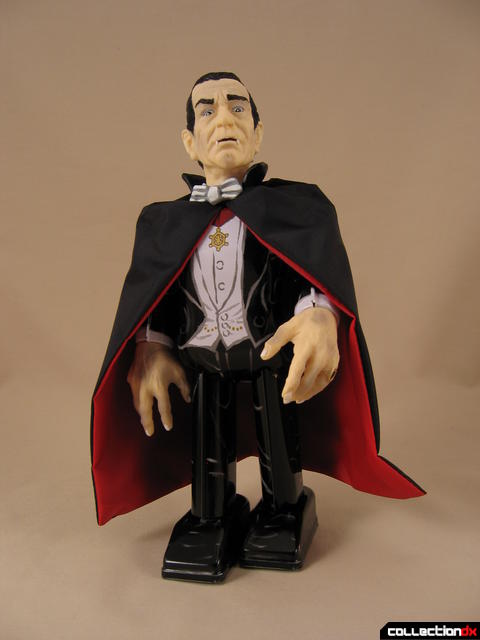 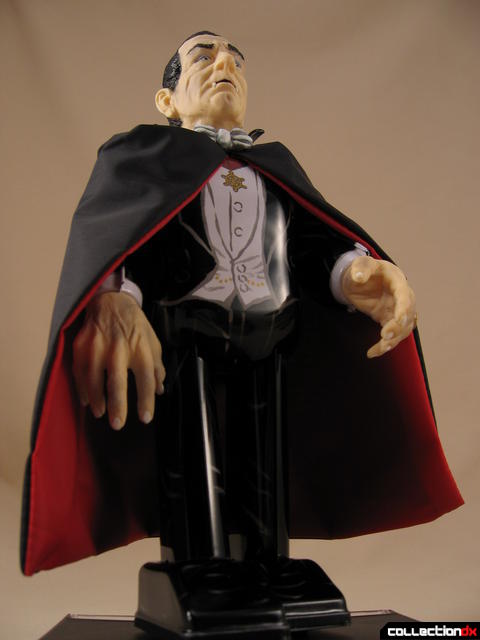