The Creature from the Black Lagoon Tin Wind-Up

It's always dames, isn't it?

There you are: a perfectly peaceful monster, hanging out doing monster stuff. Then some pretty girl strolls by...and you're pretty much all done at that point. Just give it up. You're gonna die...probably horribly.

Okay, sure, the basic plot of 1954's The Creature from the Black Lagoon is all that terribly original (*ahem*...1933's King Kong), but I've always been fond of underwater-themed robots and monsters. For example, the only mecha I like from Gundam are the wacky aquatic Zeon robots from the original series and some of my favorite Toho kaiju are the mutated creatures from Yog: The Space Amoeba. And my all-time favorite Universal Studios monster? You guessed it!

But my fondness for watery beasties notwithstanding and despite the lack of innovation in terms of plot, I think the true appeal of the Gill-Man comes from the execution if not the concept. The Creature is an evolutionary throw-back, a sort of missing link in humanity's evolution. Only this is no bigfoot! The Gill-Man is obviously an amphibious version of ourselves--only savage and monsterously strong. Certainly part of what made the film so popular was the how good the monster actually looked. Anyone can tell that King Kong was stop-motion animation; the Gill-Man, however, was visually actualized by actors in perfect costumes.

Ricou Browning played the creature in all of the flawlessly-rendered underwater scenes. Not only did he look totally natural swimming in the costume--effectively using the webbed hands--but there were no air-bubbles coming from the suit to betray the air-breathing actor. Next, Ben Chapman played the creature in all of the scenes on land. Here, again, the costume performed admirably. Covered from head to toe in the seamless suit, even false eyes were used to complete the eerie ensemble. Even the Gill-Man's gills puffed in and out in a subtle motion that added to the creepy realism. All in all, a very convincing monster...and the subject of this toy review!

Along with the Creature, Robot House produced Frankenstein's monster, the Wolf Man, and the Mummy. In 1992, the company was renamed to "Mike Company", when they produced a similar Dracula wind-up with a slighty different style of packaging. 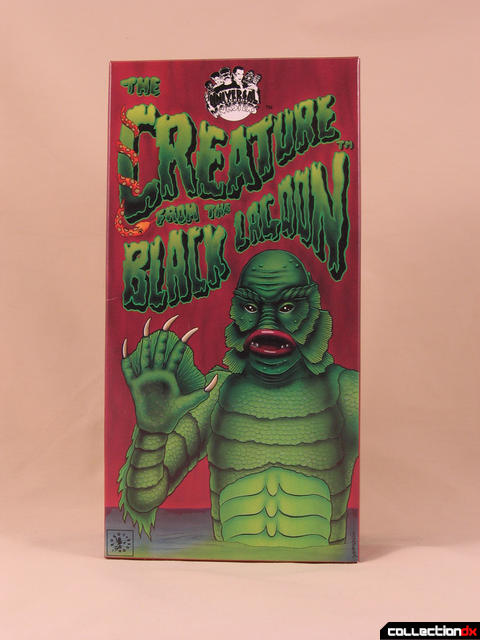 Not bad box art, but I would have preferred a sunny swamp scene in the background. 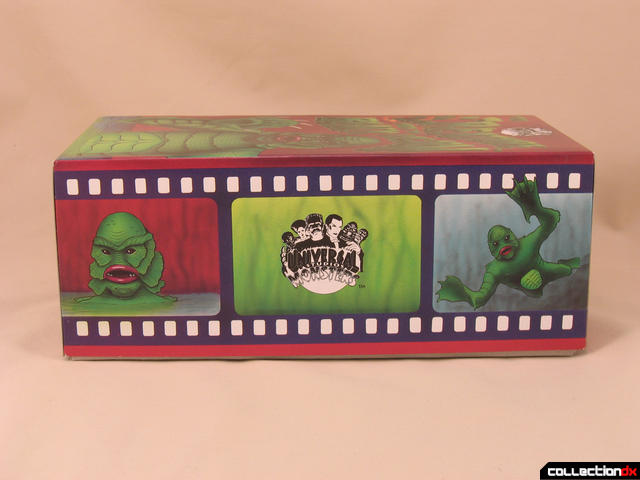 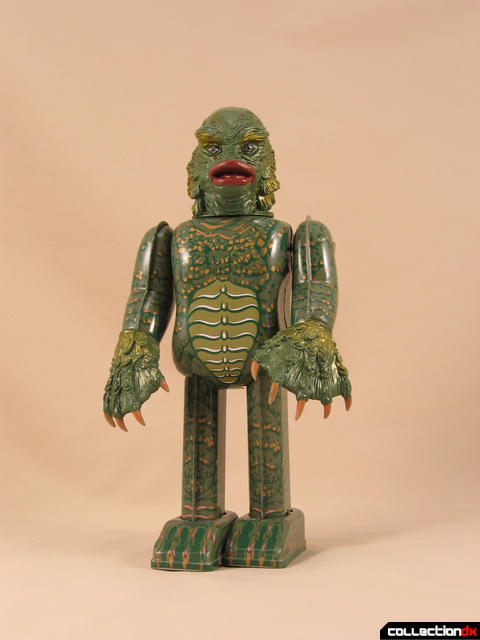 I think the whole look of this piece is fantastic. This was actually the first of these Universal tins that I ran across while browsing eBay for Creature merchandise. Not even being all that passionate about tins, once I got a good look at the quality of the lithography on the tin and the sculpt and paint of the vinyl parts, I was sold.

And speaking of the tin, the colors and style are perfect as far as I'm concerned. As with the other Universal tins, the art style is far from photo-realistic, but not too exaggerated or cartoony. It produces almost an impressionistic look for the toy that makes it unmistakably recognizable as the Gill-Man. The use of darker green striations across the lighter green base create a nice scaley effect. Also, the addition of gold scales and frills also works well with the gold used on the vinyl parts and serve to mimick the glinty wet look the creature had after coming out of the water onto land in the movie. 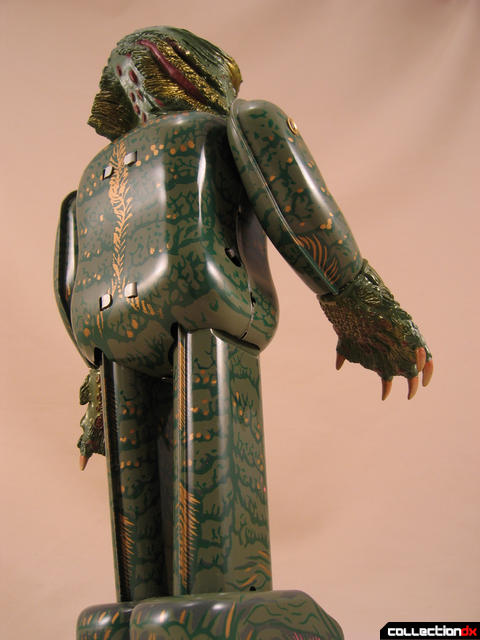 Besides the tin bits, the vinyl parts--the head and hands--are just as well-rendered. These parts are hollow and very lightweight, but they are also very stiff unlike your typical sofubi ("soft vinyl").

Unlike Robot House's Wolf Man and Mummy, I find the face of the Creature flawless. The surface detail is gorgeous. There doesn't appear to be any dry-brushing, but the green vinyl is over-sprayed with gold along the flared ridges of the gills. Also, red paint was air-brushed onto raised bumps and ridges on his skin; these details complement the red of his lips and tongue well. Also, the silver used in the eyes matches the sort of dead "fish-eye" look of the Creature from the movie. 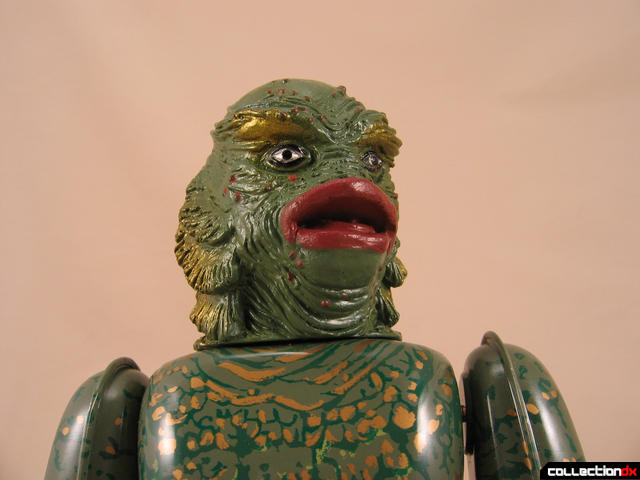 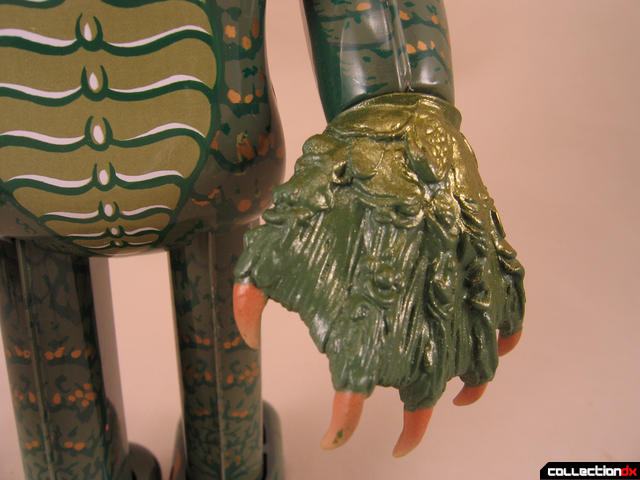 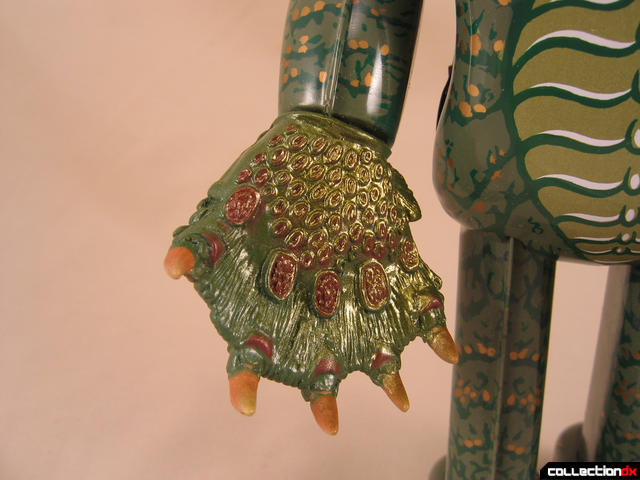 Again, this toy looks great overall. The colors flow nicely between the vinyl parts and the tin body, and the style of the artwork on the tin ties the simple shapes of the body to the realistic sculpt of the head and hands. 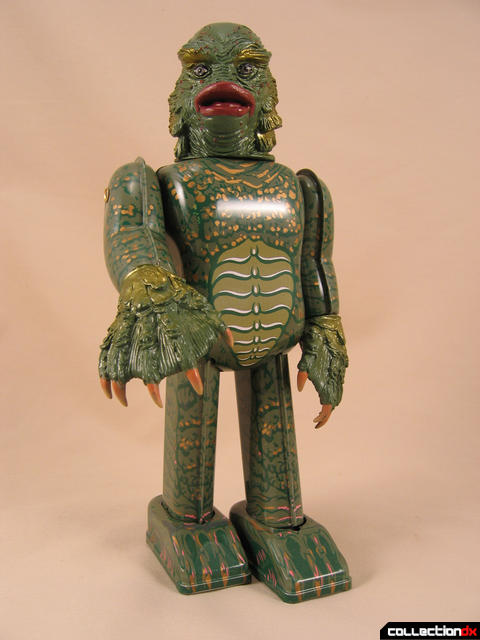 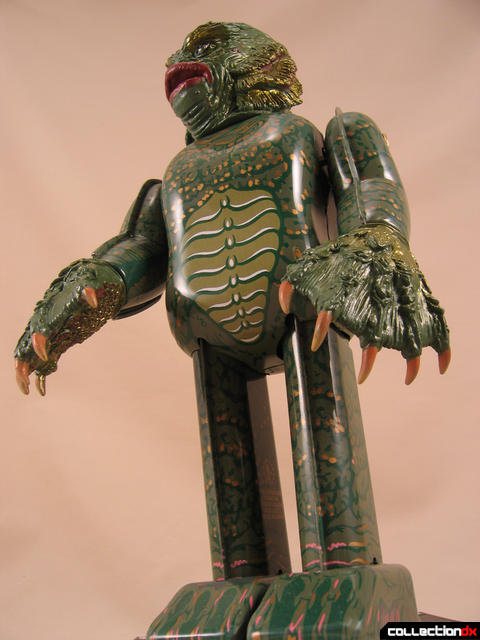 "Though I would like to see the character get a 21st century reboot myself."

You'll get your wish! But am I excited? Nah. I've never really gotten into remakes...

I have to admit though, I randomly caught De Niro in Mary Shelley's Frankenstein on tv the other day. Not too shabby...but I actually found TNT's 1992 tv production of Frankenstein to be my favorite telling of this story. I know, I know...Randy Quaid??? Seriously, if you're a Franky fan, check out this incarnation of the story. It's smoking.

...Okay, now that I've completely hosed my own argument against remakes in general, let me modify my previous statement: I've never gotten into most remakes! So, will I go see the Creature remake? Probably...but only because it's the Gill-Man we're talking about here. I don't have high hopes for a good film, though...just look what they did to poor Imhotep in '99's The Mummy...