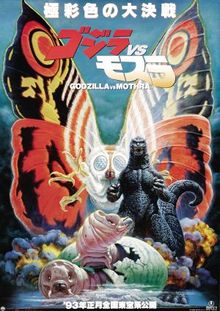 Godzilla vs. Mothra (ゴジラVSモスラ, Gojira tai Mosura), released in America as Godzilla and Mothra: The Battle for Earth, is the 19th installment in the Godzilla series of films. It is the sixth film to feature Mothra and the only film to feature Battra. The movie was released theatrically in Japan on December 12, 1992.