The original Power Lords were like nothing else in the toy aisle. The humanoid figures had a certain creepy flavor, but Wayne Barlowe’s creature designs were especially innovative.

A standout, common figure from the original release, Ggripptogg is the most iconic of the Power Lords creatures. He’s a natural for the first wave of Four Horsemen’s resurrection.

A few variations of this sculpt have been released in limited quantities, but this is the first proper release of the character in its final colors.

The packaging is similar to Four Horsemen’s Outer Space Men, with an easily removable (and replaceable) card back behind a simple plastic clamshell. The card art is a near reproduction of the original, including a clever nod to the Revell logo in the corner. Artist Nate Baertsch provided the new illustrations. 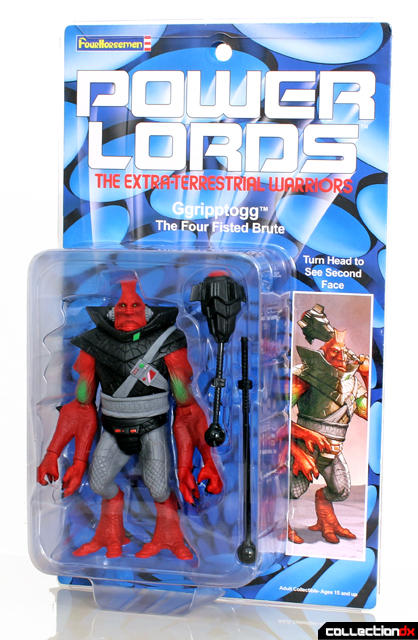 The card back is retro as well, complete with descriptive file card. 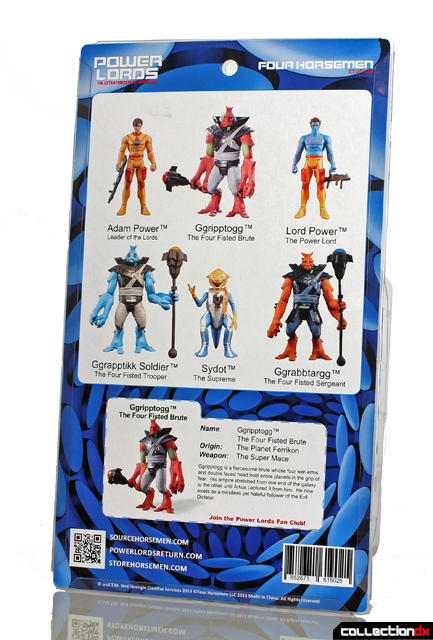 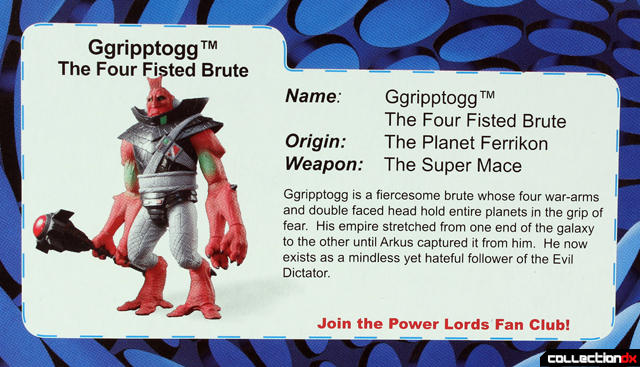 This Ggripptogg captures the presence and funk of the original, but with a more accomplished, serious execution. Four Horsemen worked closely with Barlowe to hew close to his original vision, and this collaboration paid off with a beautiful figure. 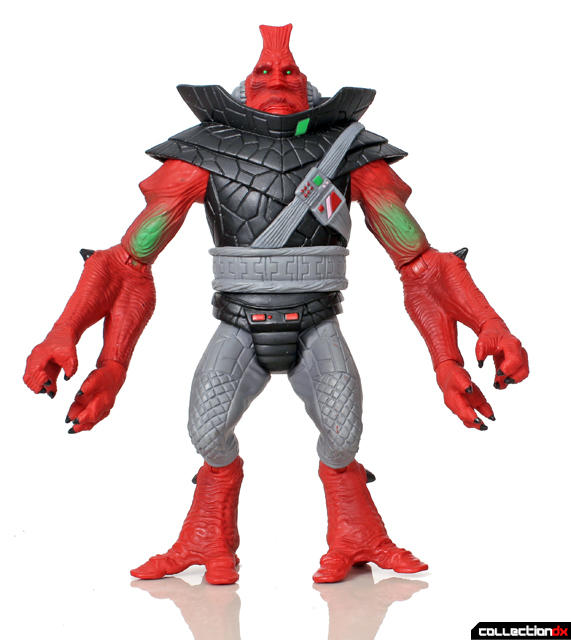 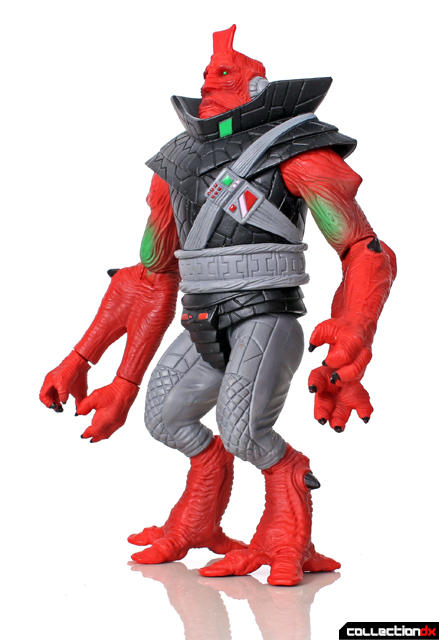 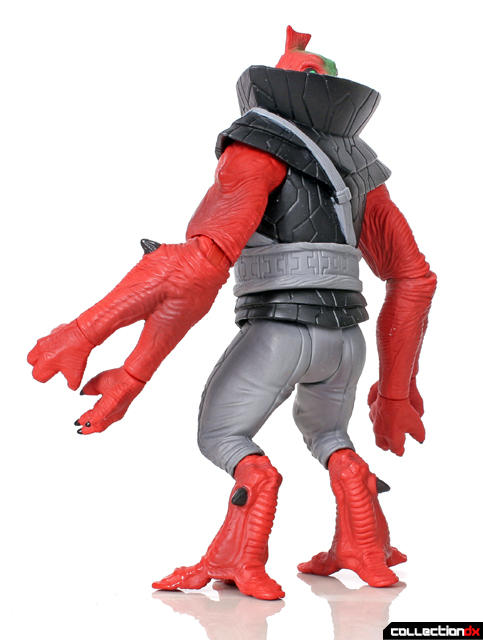 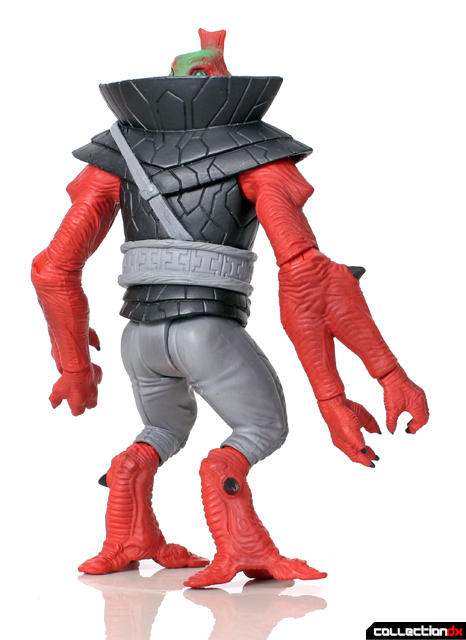 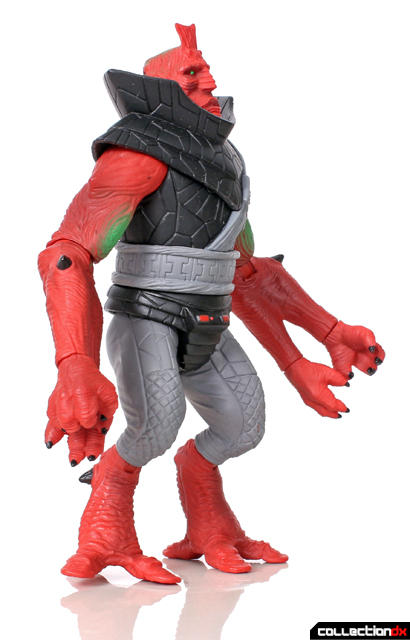 Because this is a Glyos-compatible toy, it’s easily deconstructed into interchangeable pieces. 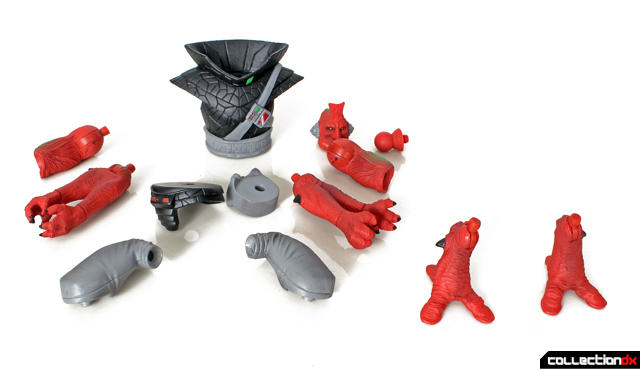 Four Horsemen is making leaps with each new release. The fit, finish, and sculpt are all stellar. The original toys all had unusually detailed textures, and those textures have only been amplified.

The feet evoke both leathery skin folds and pooled lava. 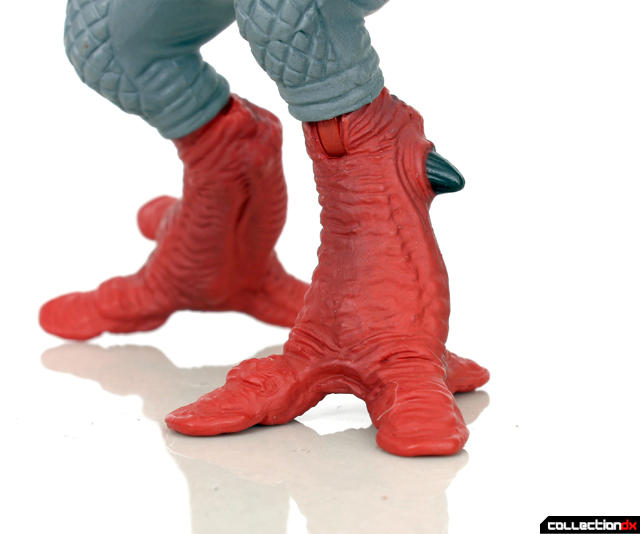 Look at these wrinkled arms. Notice the subtle shading on the forearms, the green paint app on the bicep muscle striations. Ggripptogg’s tunic looks like cooling plates of magma. The easily-lost accessory belt and sash are integrated into the torso sculpt and painted. 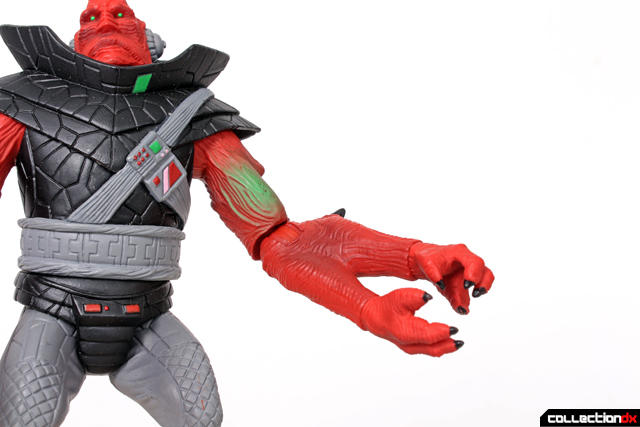 Ggripptogg is respectably articulated, but the nature of the character design limits posing. The shoulders rotate, raise and lower, but the shoulder armor limits them somewhat. 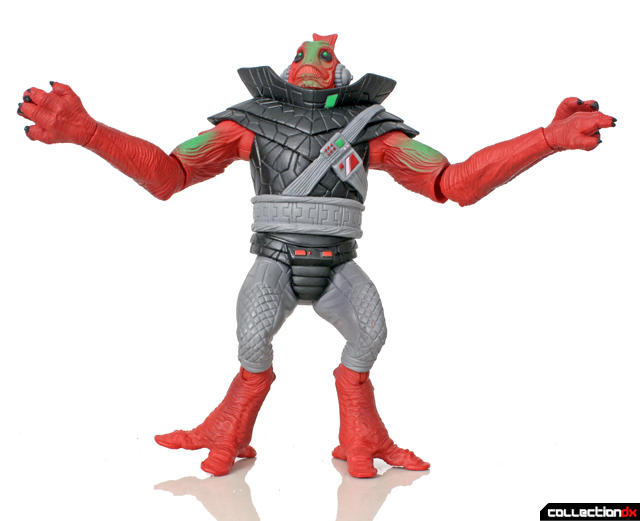 The backwards knees rotate well enough but there’s not a lot you can do with them. 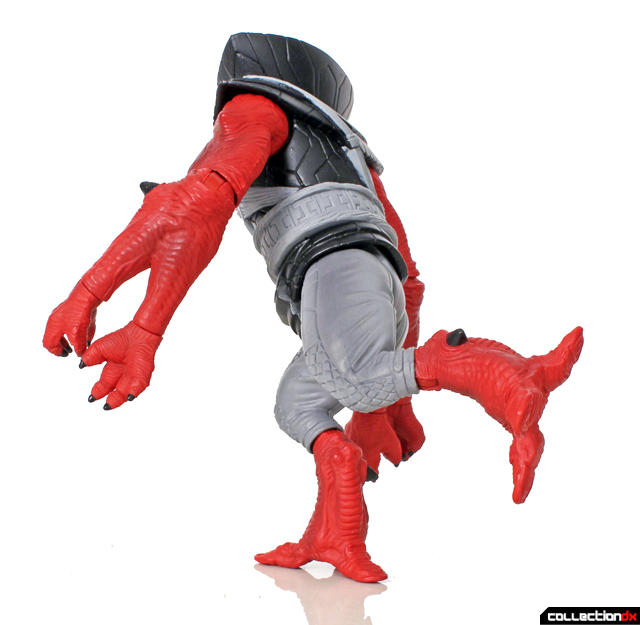 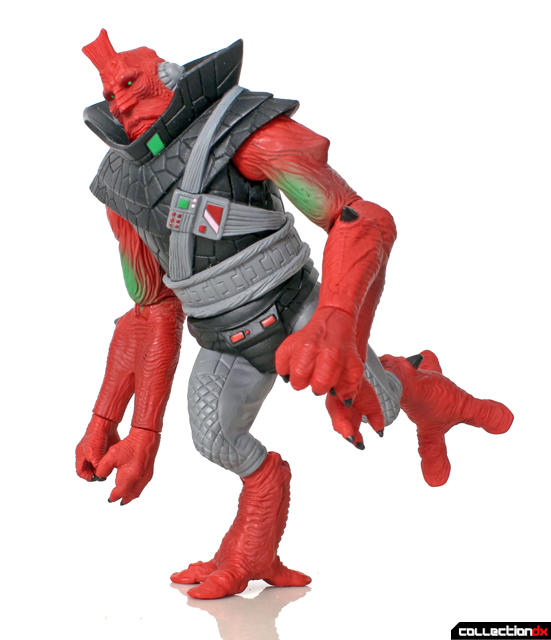 I understand the technical limitations, but I miss the opposed, individually articulated forearms of the original. As-is the bolded design feature of the character, the bisected arms, are lackluster.

Still, Ggripptogg looks great doing what he does. 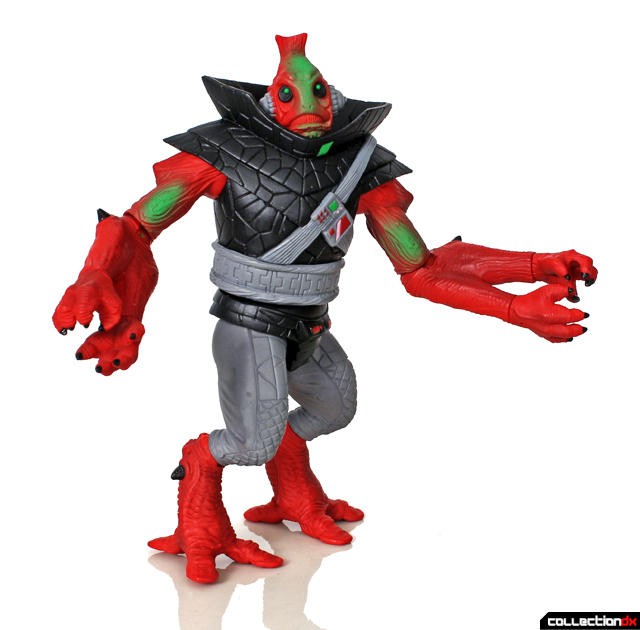 The double-sided head remains, and the individual face sculpts are awesome. The head is on a ball joint to boot. 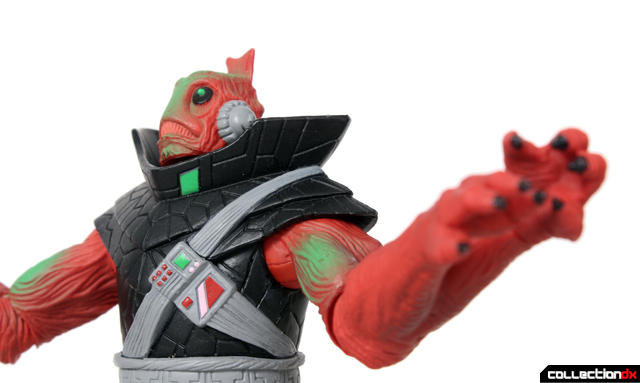 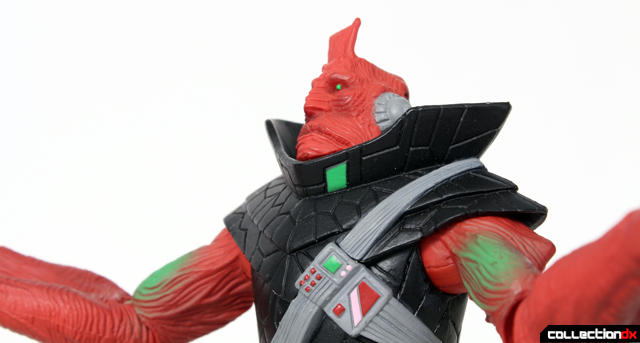 Include is the Super Mace, with staff attachment. On the old figure, the ball handle snuggled between the opposed hands. On this version, that doesn’t work so much. Still looks good though, as does the longer staff version. 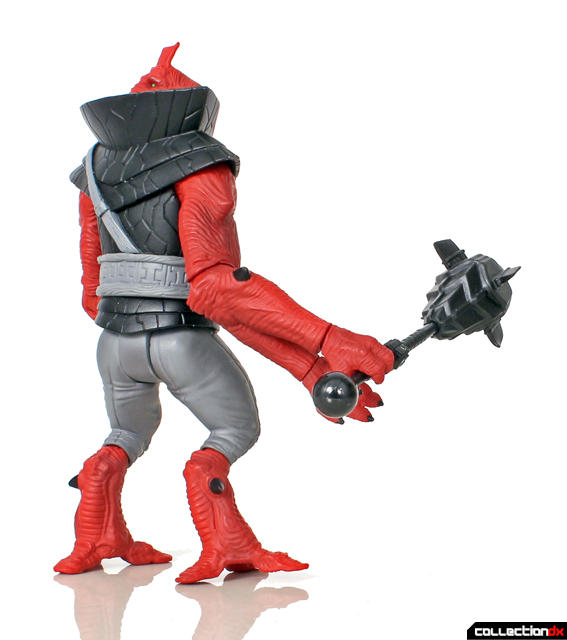 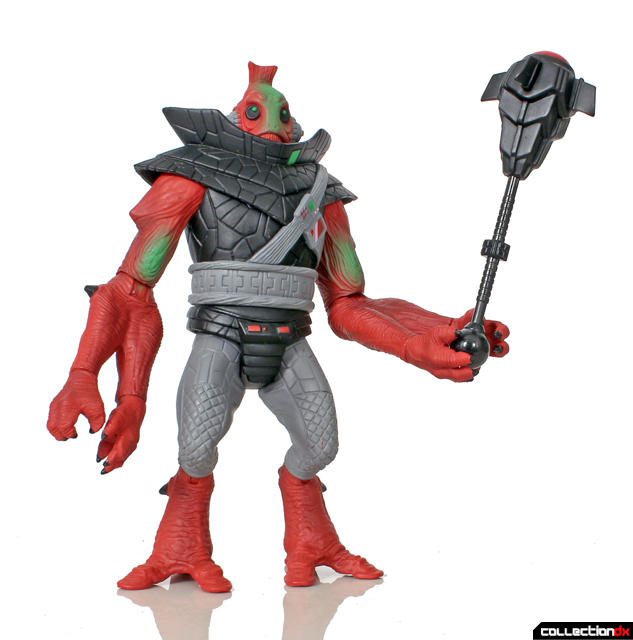 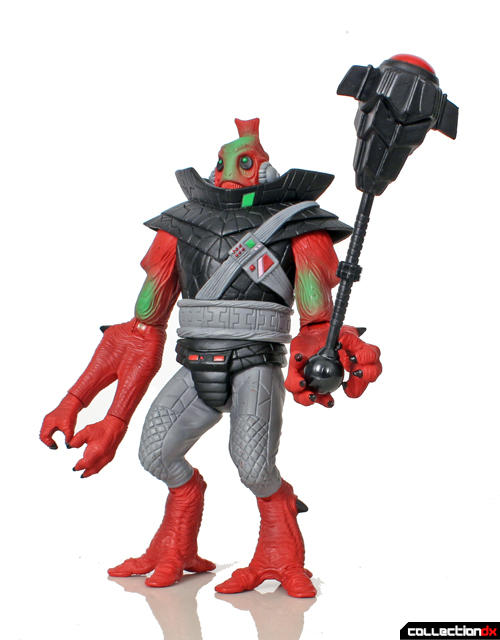 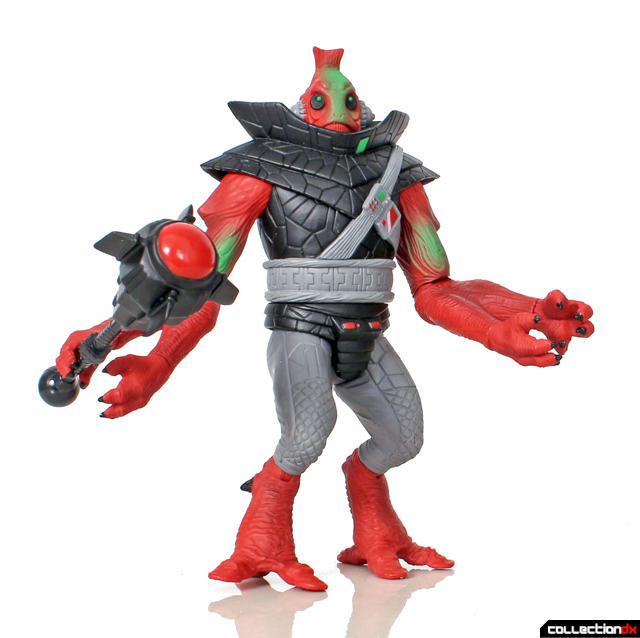 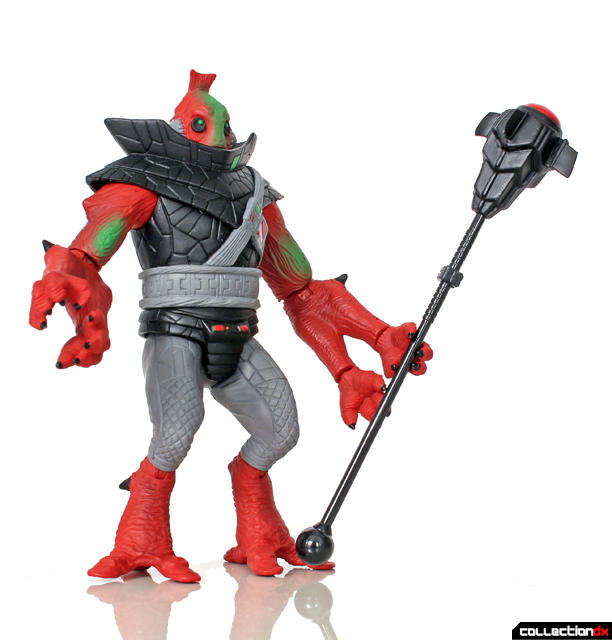 So a fine update to a classic toy. Gripptogg is a lovely, engaging toy which succeeds on its own merits, though its pedigree is impeccable. I perhaps unfairly compare this too much to the original, but it’s terrific by itself. 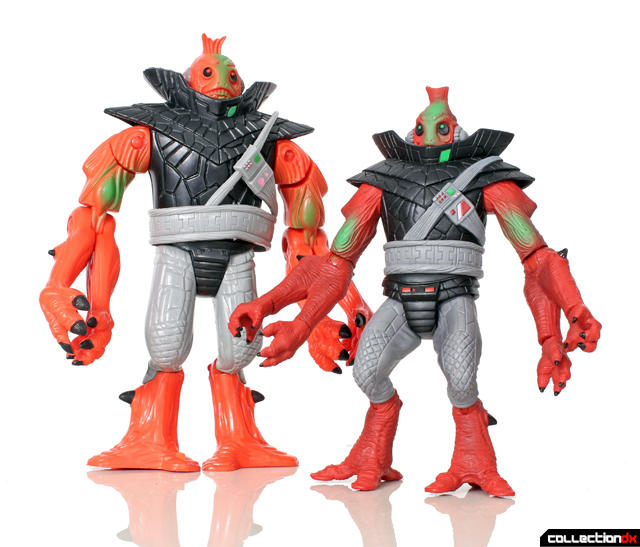 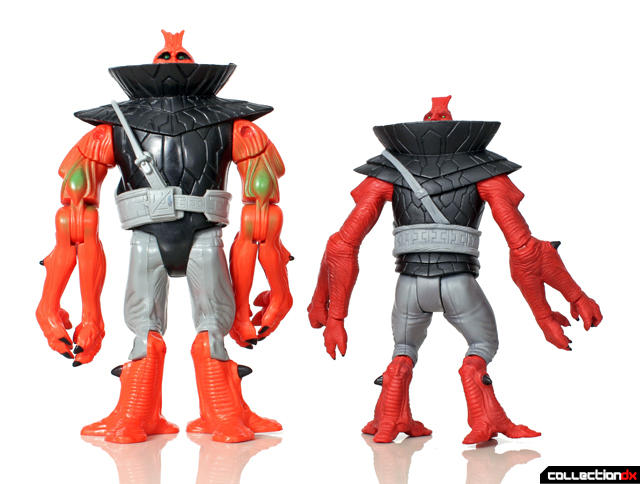 If you like this sculpt, two similar figures are also available as part of this first wave. 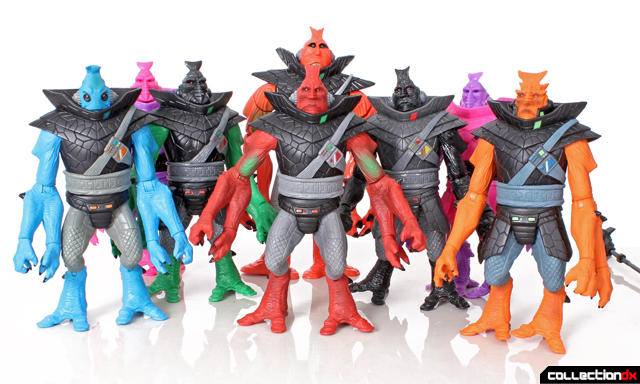 I can see that the classic figure has better articulation overall, but the new one is just plain beautiful with all the sculpted details and paint apps.
This would be a great figure to place with Power Rangers figures or SHFiguarts.