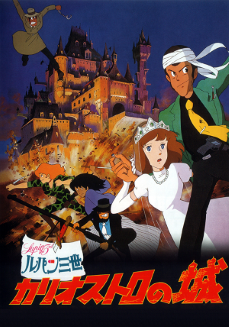 This is about eating way too much food, European ninja, and goat heads but not goat bills.

Click [HERE] to whack a bad guy in the head with a wrench without pausing your newscast.

1 comment posted
Alright, I have a lot to say

Alright, I have a lot to say about this episode. First off, the car's a Fiat 500, not a VW Beetle. Also, isn't the P38 the gun that Lupin uses, not Fujiko? It's been a while since I've seen this movie, so I could be wrong about that though. You guys seemed pretty down on the soundtrack, but I disagree. I really like Yuji Onho's work. He did the soundtrack for this movie and the second tv show, and he does a lot of good stuff on his own albums too. His work is definitely a product of it's time, but I personally really enjoy it. Also, I haven't seen either the new bluray or dvd, but you shouldn't say that because one has jutter, the other probably does unless you know for sure. The encoders used for bluray and dvd are totally different, and I doubt that they would let a master look like that. Sorry for being so nitpickey. I still enjoyed the podcast, keep up the good work!