The Green Ranger from Mighty Morphin’ Power Rangers is a character that needs little introduction. This evil-turned-good Ranger became immensely popular with the fans. So much in fact, that Tommy Oliver transcended many seasons of the Power Rangers franchise.

In Japan this Green Ranger was known as Dragon Ranger, the Yamato Tribe Knight. I can’t really speak too much about this character’s appearance on Zyuranger since I have not gotten that far in the show.

This Ranger’s S.H. Figuarts release came in two flavors: Zyuranger and Mighty Morphin’. I picked up the Japanese release, for a reason that we will get into later in the review.

The Dragon Ranger release has a box that is adorned in a manner fitting of Zyuranger. 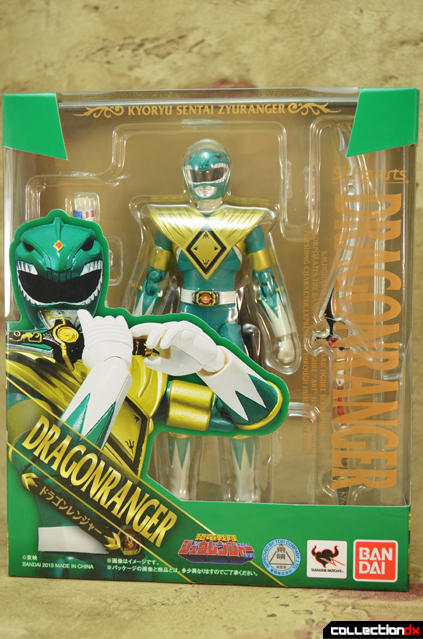 Love 'em or hate 'em, there are no lighting bolts plastered all over this box.

The S.H. Figuarts of Dragon Ranger looks good and is very well detailed down to his Dino Buckler. 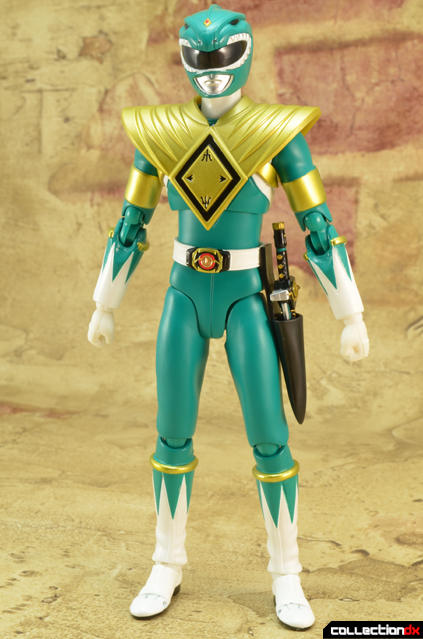 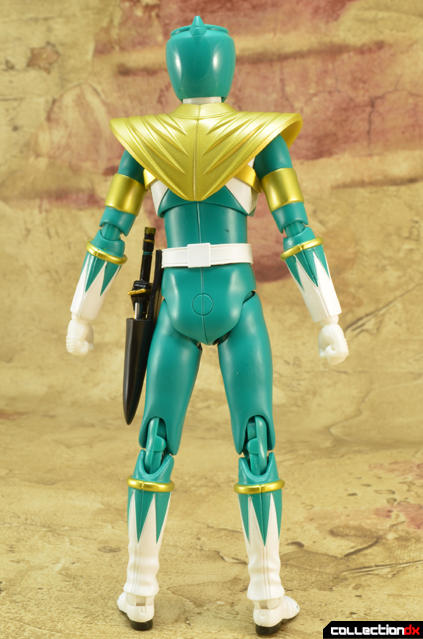 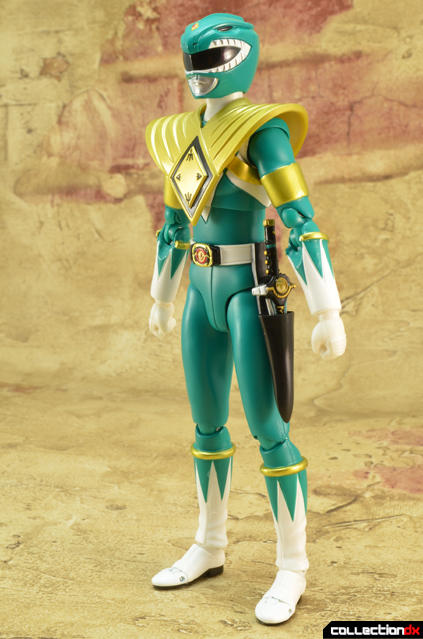 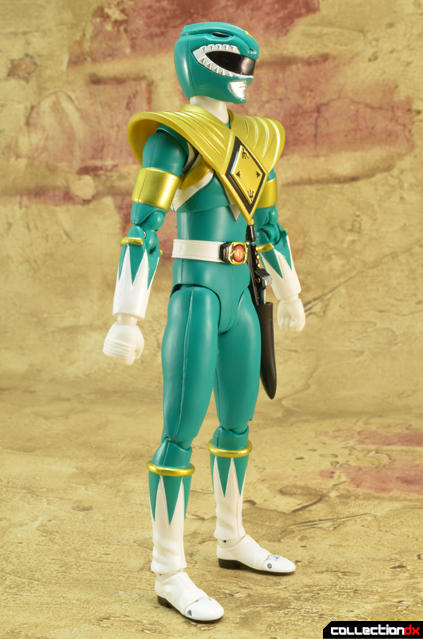 Of course, since this figure is made of plastic, it does not replicate the stretchy spandex look of the costume in the show, but that is to be expected.

Dragon Ranger comes with his iconic Dragon Shield chest armor. Although this piece is not meant to be removed, from what I have read you can wiggle it off the figure. However, doing so may cause some damage to the paint.

Articulation is great thanks to the standard joints of the S.H. Figuarts line. 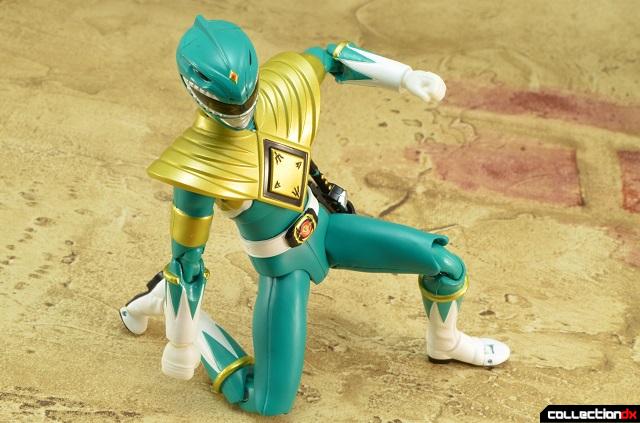 However, once again we have been denied a bicep swivel, which would have helped some with posing the arms of the figure. 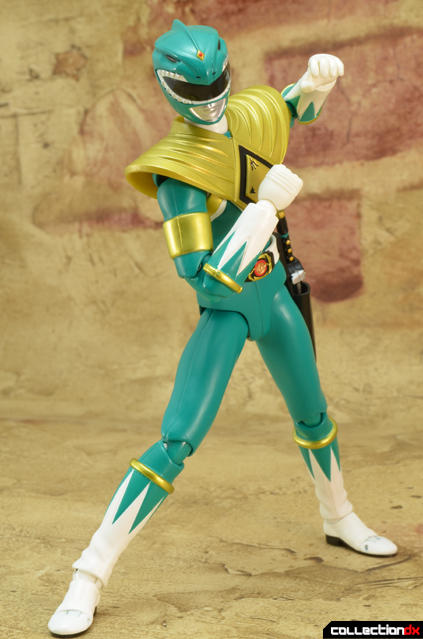 For extras, Dragon Ranger comes with his iconic Zyusouken, or Dragon Dagger as it was known in Power Rangers. 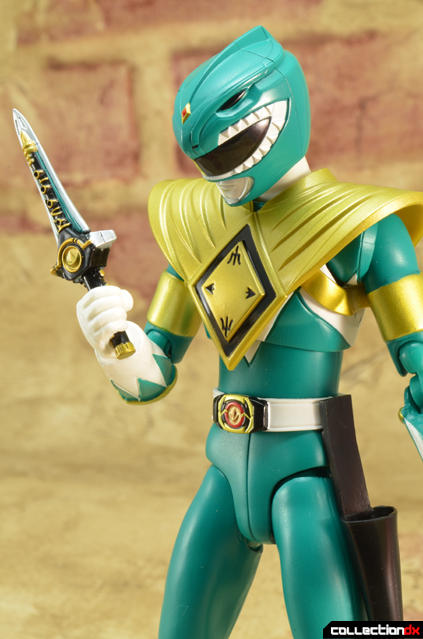 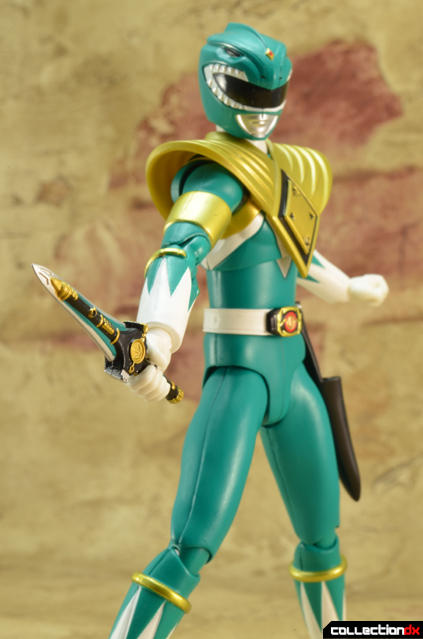 The detail on this weapon is very nice for such a small item. 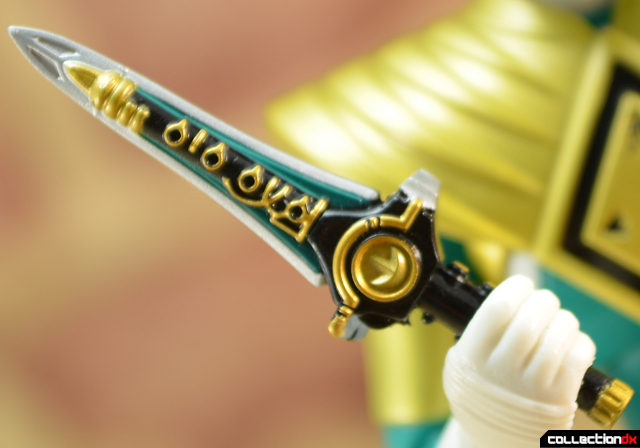 Of course the one pose most, if not all, fans are going to want to display this Ranger in is playing his flute.  When this Ranger played his iconic tune, the Dragonzord/ Dragon Caesar would show up and kick some monster butt. 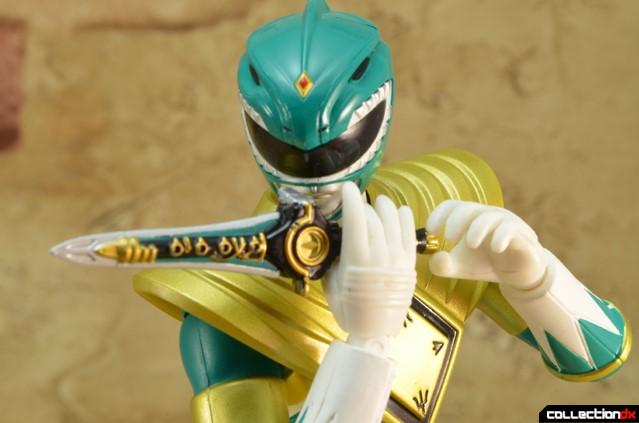 For this pose, Bandai has included a special right hand to hold the dagger.  The middle finger of this hand fits over the buttons on the dagger. The resulting force fit is what keeps the dagger in place… at least it should. With my figure, the fit of the hand over the dagger was too loose. It made posing my Dragon Ranger in this manner more of a chore than it should have been.

Also included with the Dragon Ranger is the Sword of Hellfriede (Sword of Darkness). 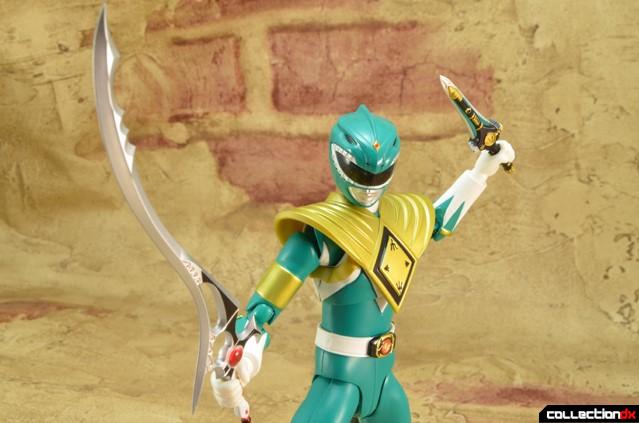 Just like the Zyusouken, this sword is very nicely detailed and even includes a clear red  crystal in the center for a bit of light piping action. 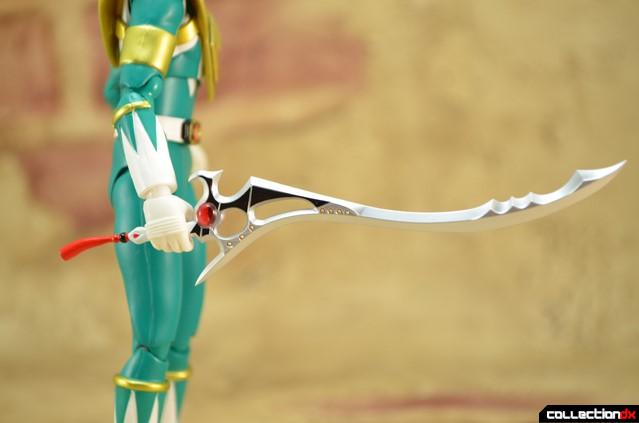 So as I mentioned earlier, this is the Japanese release of this figure. Besides the difference in packaging from the Mighty Moprhin release, this version comes with a couple of very special extras: a red, white and blue collar and belt for the figure. The collar is molded and painted into a separate neckpiece, which is swapped by popping the original neck of its peg and placing the new one on. The belt, on the other hand, is a standalone piece that can be swapped with the original by popping the torso off the figure. 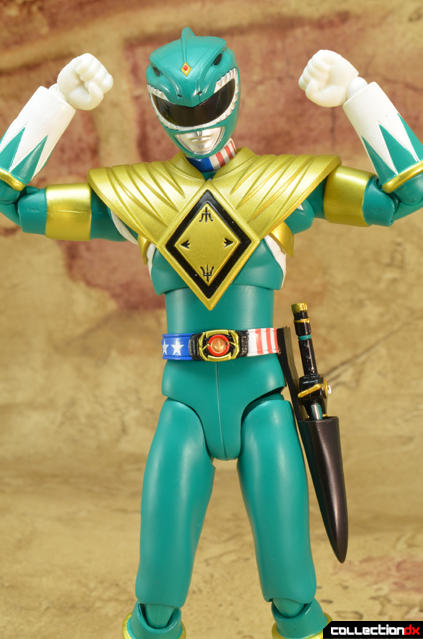 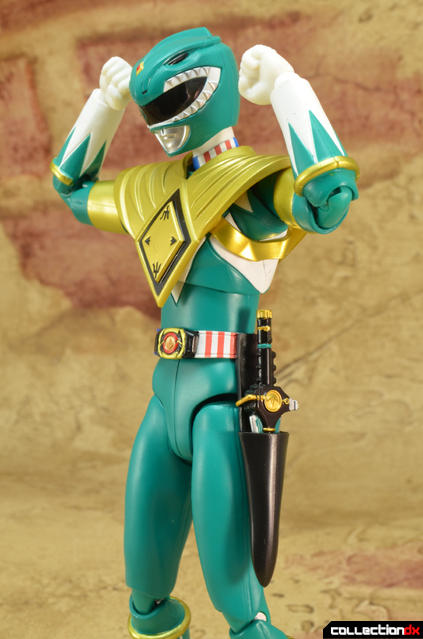 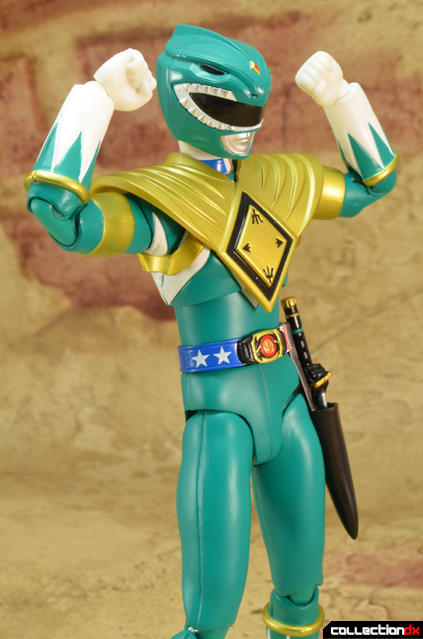 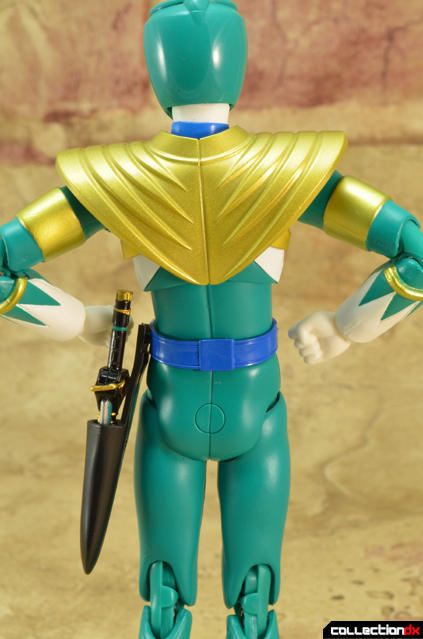 So while it is pretty ironic that these patriotic pieces did not make it into the American release of this toy, there is a perfectly good explanation for it. These parts are used to recreate Dragon Ranger’s appearance in Akibaranger, in which he originally appears as a Powerful Ranger, a spoof of the American Power Rangers. 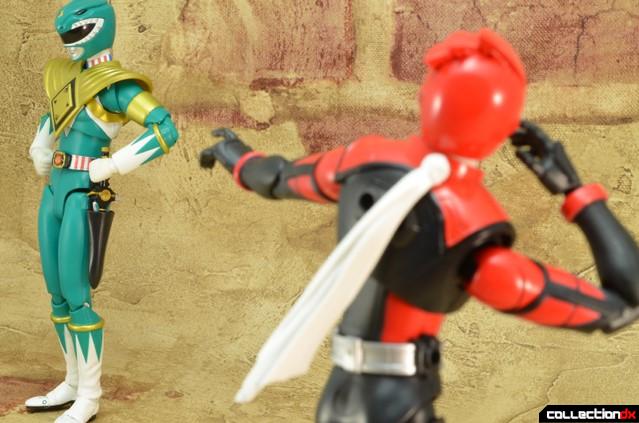 Ohhh. It's an official member! 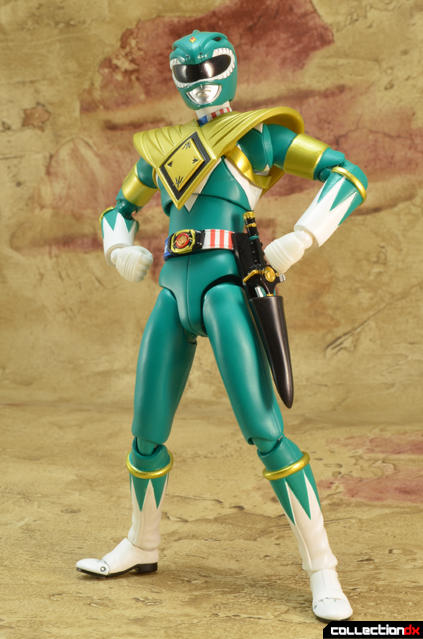 While Dragon Ranger comes with his Powerful Ranger accessories, he does not, however, come with the Innordinate Power weapon that the Zyuranger bestow upon the Akibararanger . That be included with the season 2 Akiba Blue Figuarts. 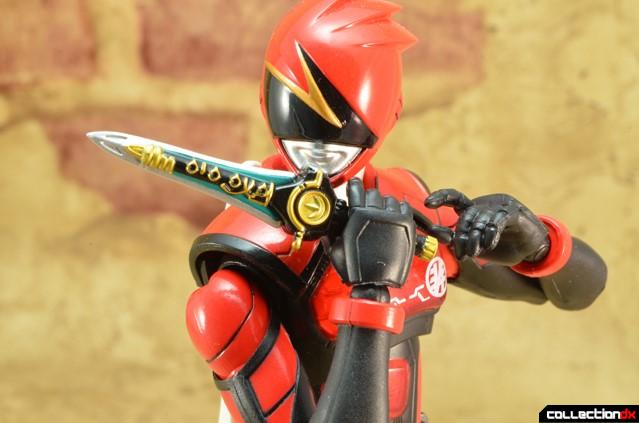 But at least Nobuo has a new toy to play with!

So this in another wonderfully articulated and detailed figure in the S.H. Figuarts line, which comes with a couple of cool weapons and extras.  It also represents a character that is very near and dear to those who grew up in the ’90s watching Tommy and the gang push back the evil forces of Rita Repulsa. So I am sure those are enough for many, including myself, to pick up this S.H. Figuarts release. 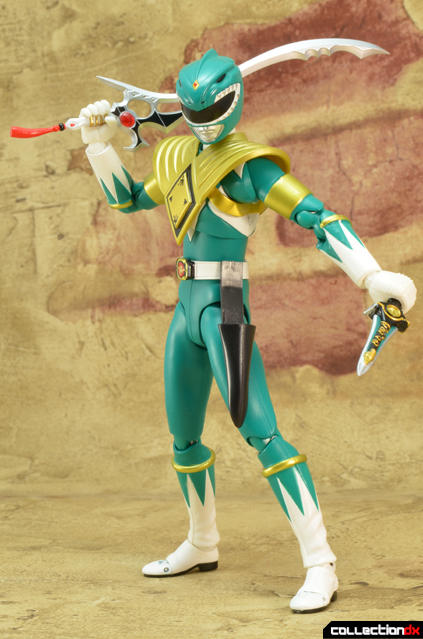 Posted by SentaiSeiya on 26 July, 2013 - 06:11
The other really important Zyuranger Figuart

That flute-playing pose is what makes DragonRanger one of the two most important Zyurangers in the figuarts line (the other being PteraRanger, who needs the articulation for proper archery poses).