The Huckebein Mk II, the next iteration in the Huckebein line, made its debut in 2000 in Super Robot Wars Alpha as a possible starting unit for the main character. Due to the removal of the alien technology found in its predecessor it is much less powerful, but still remained an excellent real robot type unit combining decent power with extreme mobility. Alpha also happens to be the first Super Robot Wars game I beat all the way through, some 13(!) years ago. The Mark II doesn't really get the time in the spotlight it deserves, getting replaced by the Mark III in the same game it debuts in, but the sentimental fondness I have for the mech places it amongst my favorites.

As is tradition, I've pulled a video from Youtube showing off the Huckebein in action (as it appears in SRW:OGs for the Playstation 2). Honestly though, I'd pass on it. It's not great quality, but much more importantly, the wrong pilot is in the cockpit. By which I mean, it's not the main character I picked. Ryoto 4 LYFE.

This reissue of the FAF Mark II was a 2004 Volks event exclusive, released in tandem with a Trombe version, and the usual characteristics of a FAF reissue hold true. Blue box, extra weapons, no stand, no booklet. 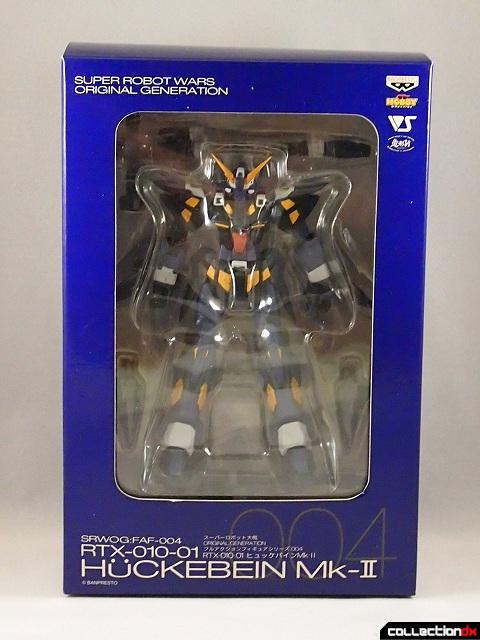 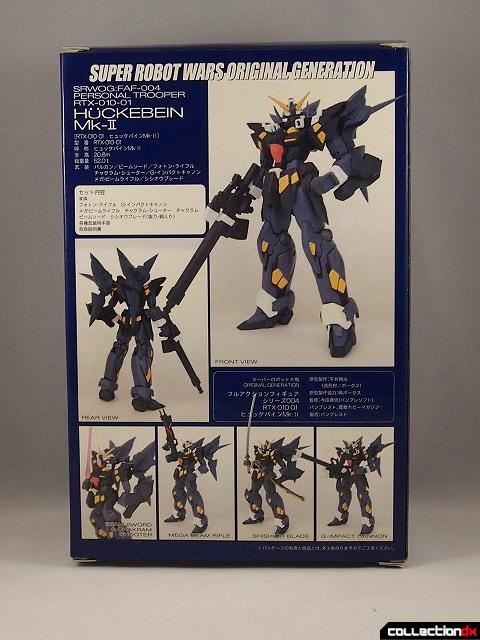 The Mark II is a sleek, angular suit; a much closer reflection of the modern Katoki ethos than the original Huckebein. 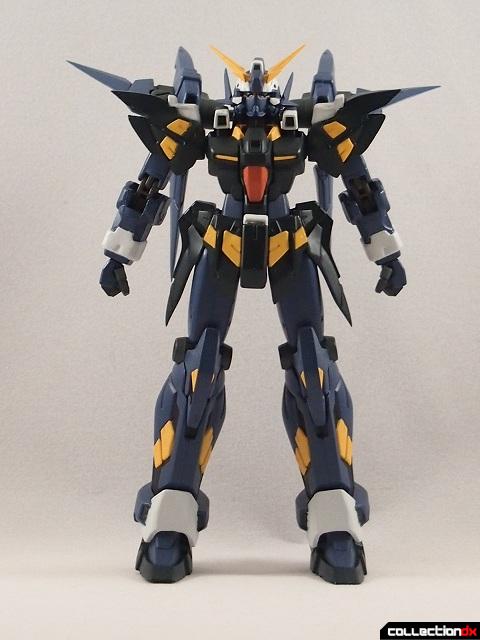 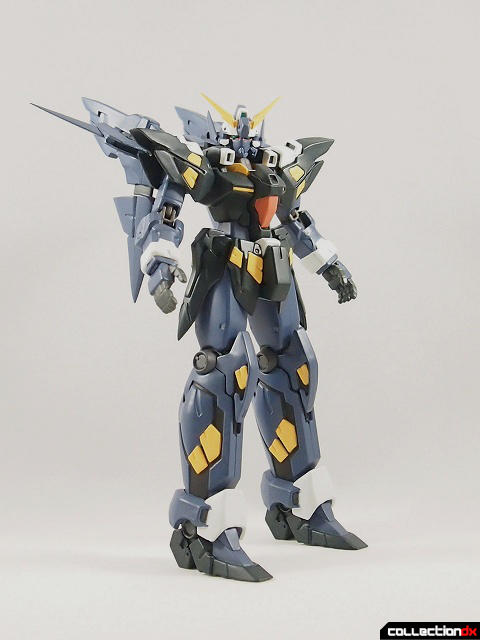 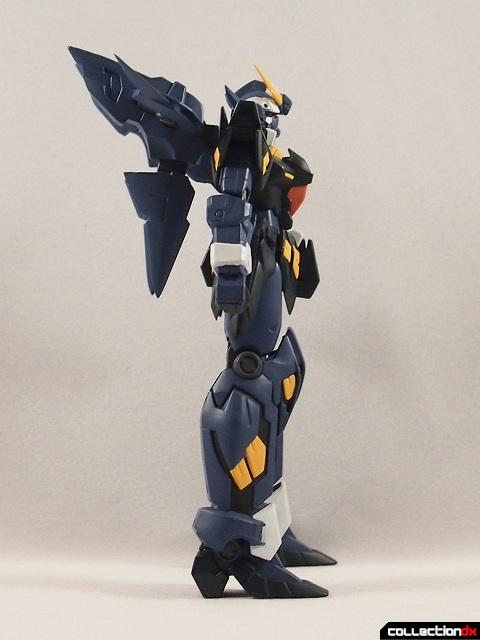 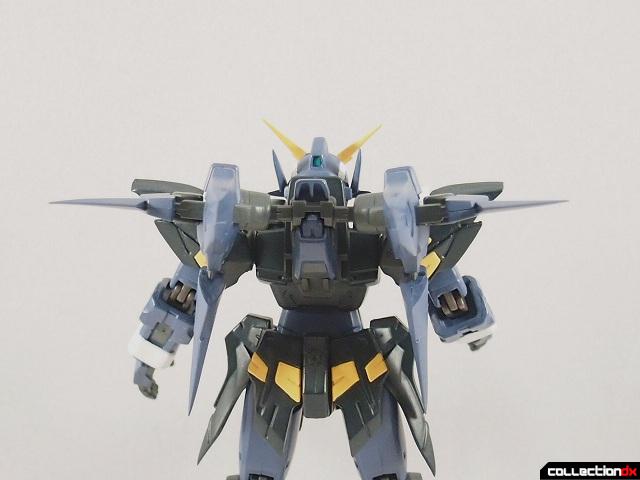 The finish of the figure is about what I've come to expect. Adequate. The V-fin and the four side fins on the head are very thin and very brittle feeling. There are some pretty uneven areas of paint application, and scars from where the pieces were trimmed still annoy me, but the paint is generally in the right place and this one isn't actively greasy. 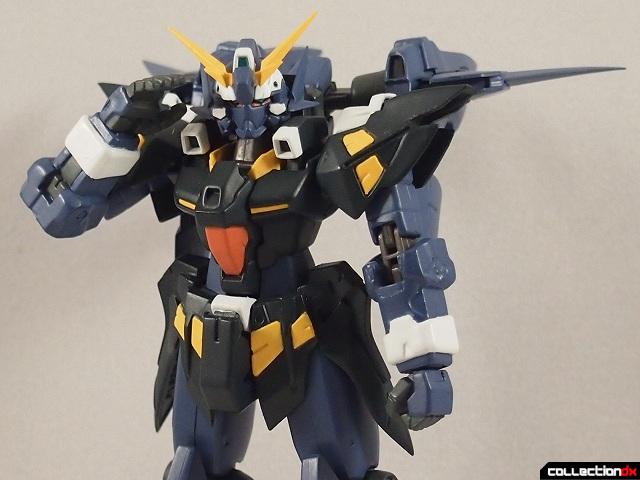 The Huckebein's wing assembly needs to be put together, and the two boosters snap on very tightly. 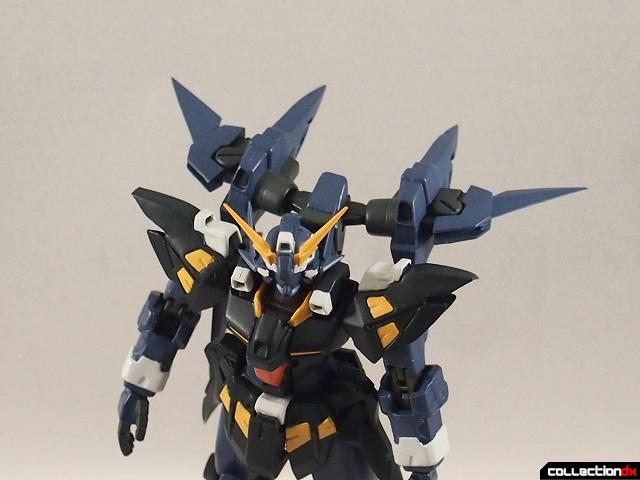 The smaller side and bottom wings are made of the same brittle plastic as on the head, and there's a very big risk of accidentally breaking them trying to get the boosters on, so here's a pro-tip for the hypothetical people thinking of getting one of these. The boosters come out of the box with the side wings already in place, but these aren't actually permanently attached. Make sure you pull the wings off, snap the boosters in place, and then re-attach them. Be real careful if you disassemble the boosters. Even with polycaps it's a tight fit, and I noticed stress marks on one of the ball joints when I was putting everything back in the box. The wings are also very sharp. I got snagged on the left wing and the tip broke off, although it's hard to notice unless you're looking closely.

Overall poseability and layout is almost exactly the same as the Huckebein Mk I, so I'll hold off from repeating myself. Double joints for the elbows and knees are still the norm. The body is a solid piece, so there's not even a waist swivel. The skirt armor is now hinged on the front and back, so the range of motion on the thigh is greatly expanded, although the same ball jointed hip armor from the Mark I reappears here, preventing both lateral movement and further forward movement. 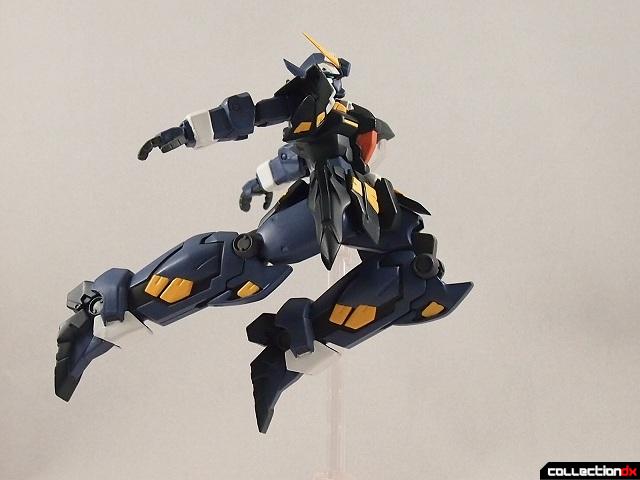 This next section gets a little inside baseball, so...uh, maybe skip it if you want to. The SRW Figure @Wiki, although incomplete and dormant since 2008, has been an invaluable resource for providing a lot of factual data for my early FAFs. The entry for the Mark II reissues note that it has "repaired areas" (改修個所). According to the the site it's one of only two reissues to be fixed after the mail away release, along with Psybuster. The Psybuster entry has a long list of specific fixes, but unfortunately "改修個所" is all that's listed for the Mark II. Since I don't have the original Dengeki version(nor do I plan on picking one up), this is pure speculation on my part, but I noticed that a major issue on the Huckebein Mk I, the shoulder connection, has been altered to prevent the joints from seizing. I'm guessing that the original Mark II figure uses the same shoulders, and that it wasn't until the reissues came out that this issue was fixed. Without one of the originals I can't say for sure, but it's probably not a bad idea to stay away from the black boxed versions of the Mark II.

The Huckebein's basic melee weapon is its Beam Sword. Like the Mark I, you get two hilts, one with a hand attached to it, and a single blade to swap between the two. 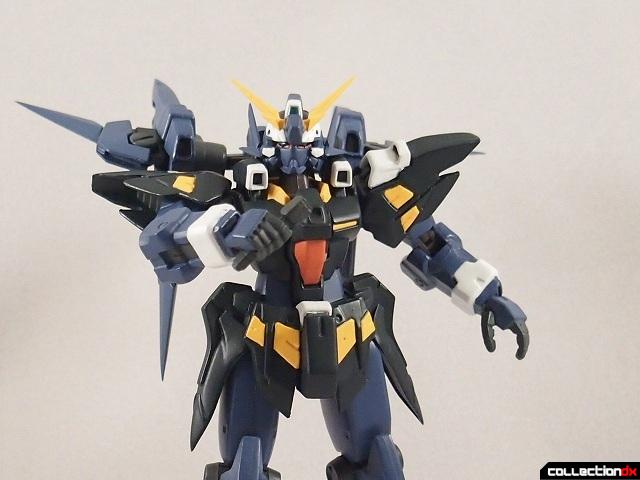 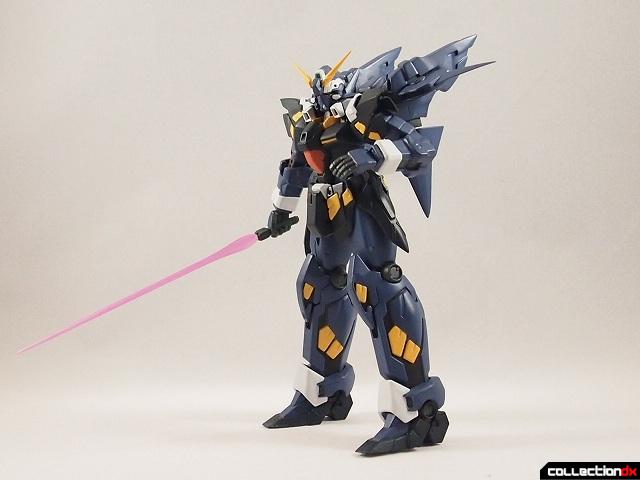 The standard sidearm of the Mark II is the Photon Rifle. I really like the bare bones look of this gun. 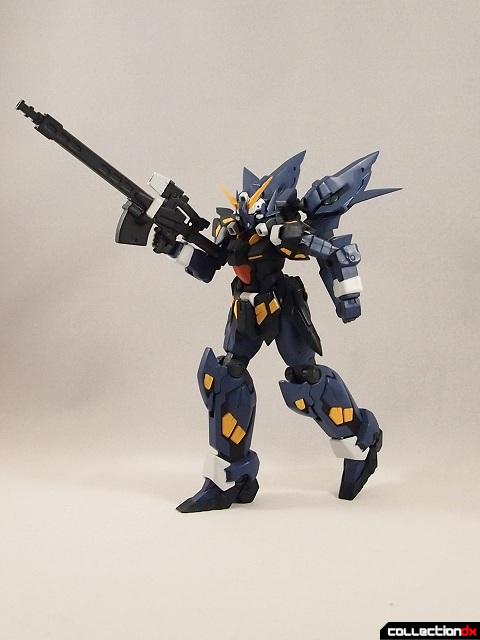 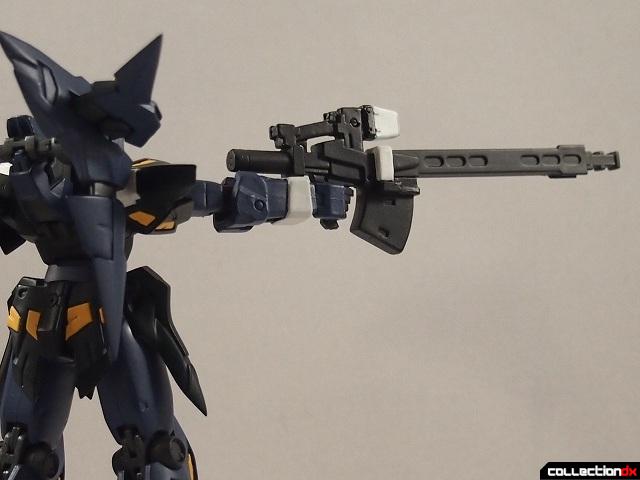 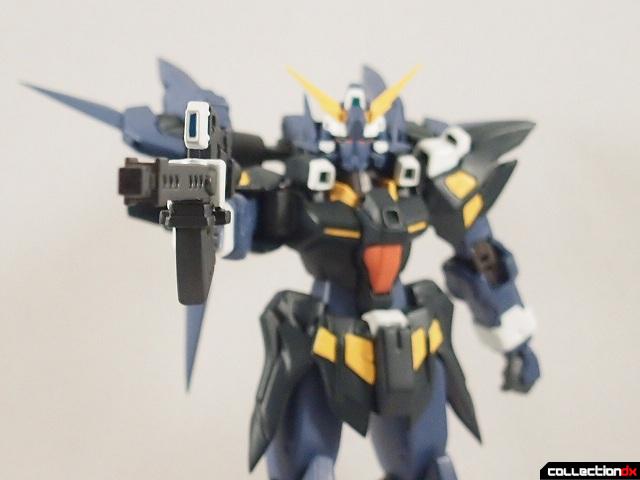 The Chakram Shooter is a remote controlled, wire guided weapon. 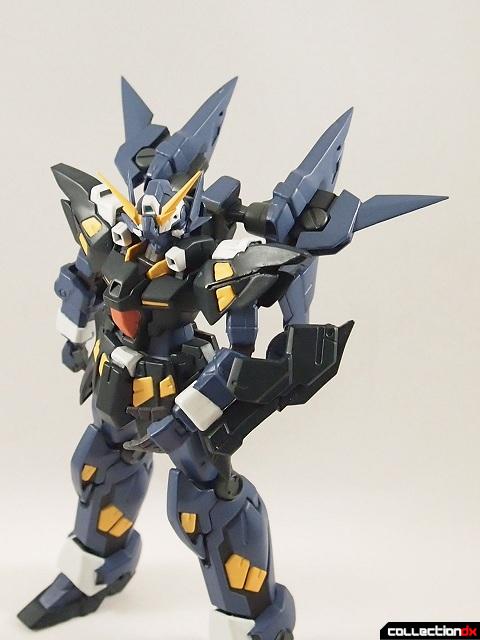 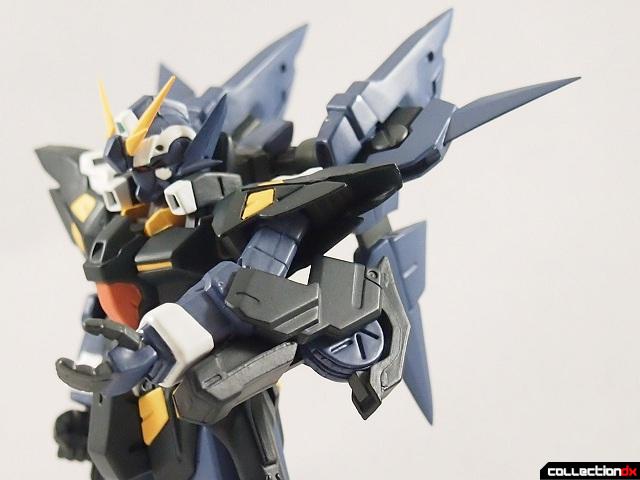 The launcher fits over the Huckebein's forearm, and opens up to reveal one of two included chakrams inside. 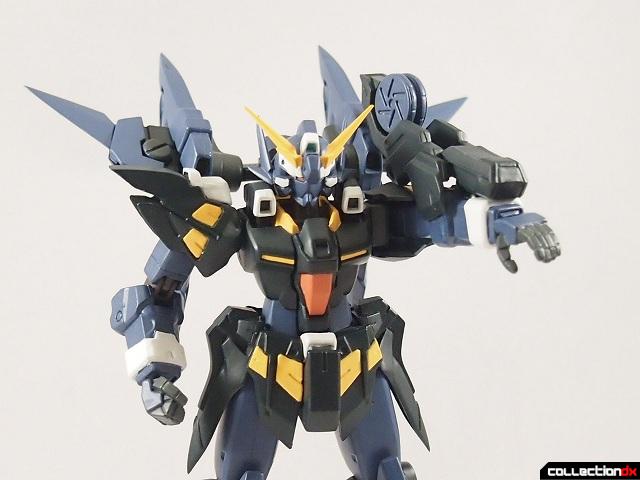 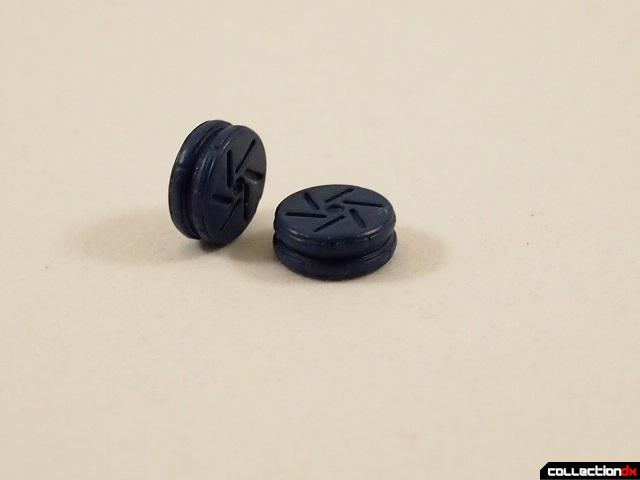 There's not a lot of thought given to the chakrams; they don't really stay in place and depending on the position of the Huckebein's arm they'll often end up falling out of the back of the launcher, which is not enclosed.


Heavy firepower comes from the unfortunately phallic G-Impact Cannon, which doesn't help its case by plugging directly into the Huckebein's crotch. 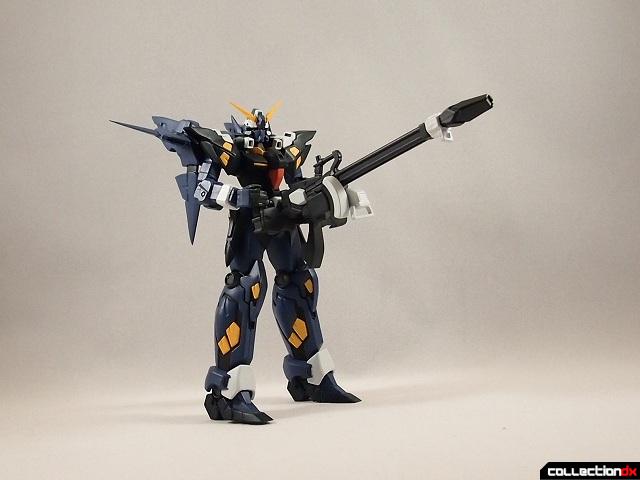 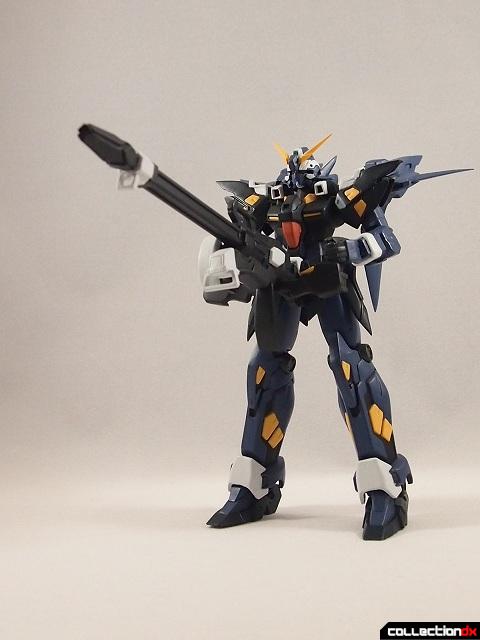 The cannon is made up of several pieces of ABS and PVC, and uh, it's also kind of glued together a little crooked. The firing hands don't actually hold the gun up, and instead loosely slide over the handles. You know, let's just move on.


The reissue includes two more weapons, the first of which is the Mega-Beam Rifle. This is the same weapon that originally came with the Gespenst. 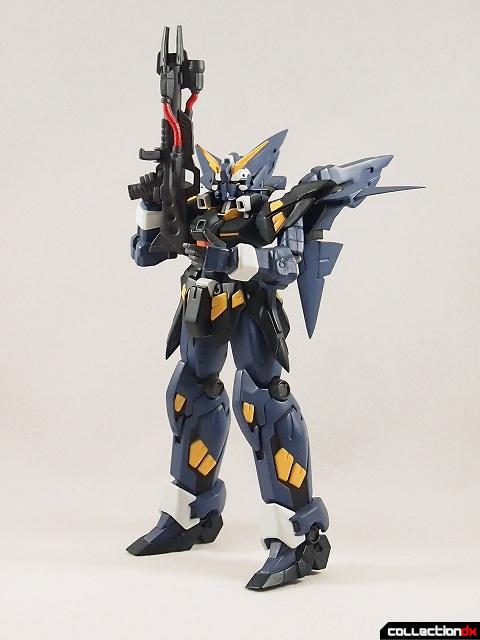 Second is the fantastically anachronistic Shishio Blade. The katana comes in several parts: the scabbard, the blade itself, and two hilts, one with hand attached, which can connect to either the scabbard or the blade. A curled hand is also included to hold the scabbard, although it doesn't do that very well, and the security of the connection between hand and sheath is mostly dependent on factors like tidal forces and the Roche limit. 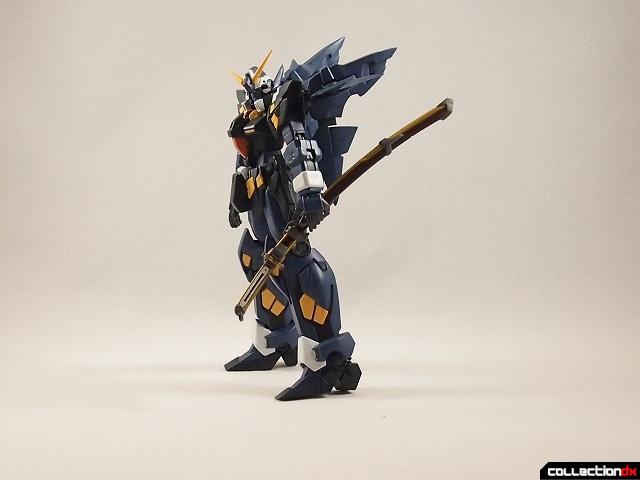 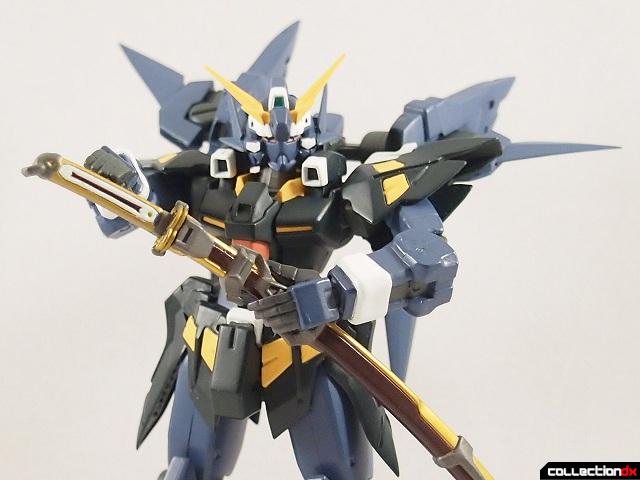 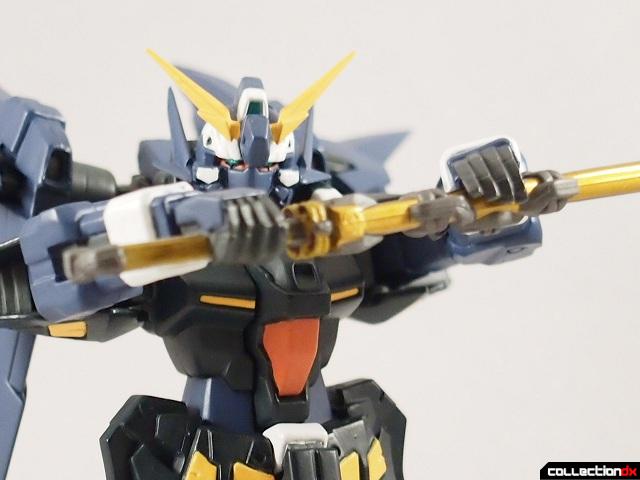 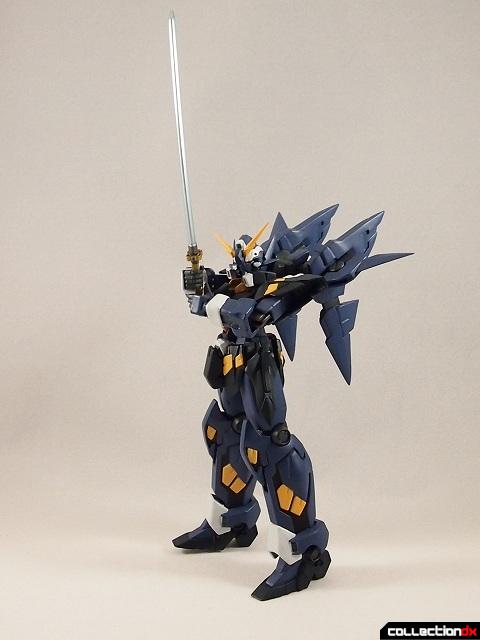 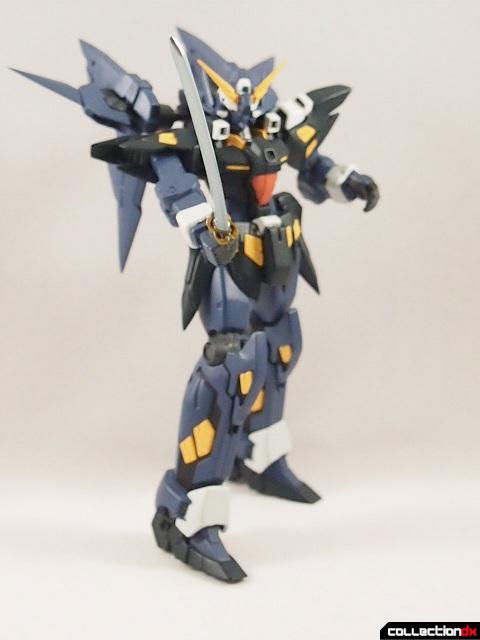 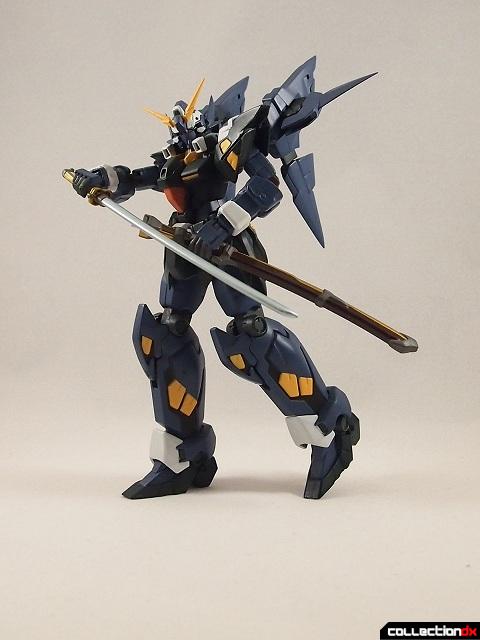 I tend to compare this line to the old Mobile Suit In Action releases, and aside from some some material choices and slight issues with construction this is the FAF in my "collection" that I consider to be most MSiA-like, although it's still not as durable as those figures were. Oh, just to be clear, I consider "MSiA-like" to be a good thing. The question is, do you want one? A year later Banpresto and Unifive released another Mark II action figure, and that one had metal in it. I often see the Unifive Huckebein on YJ for as low as 4,000 yen, which is pretty close to the price you'd find a FAF Huckebein for. Just like in the games, the Volks Mark II didn't have a lot of time before it was outclassed.

Next Time: One of the Valsiones! 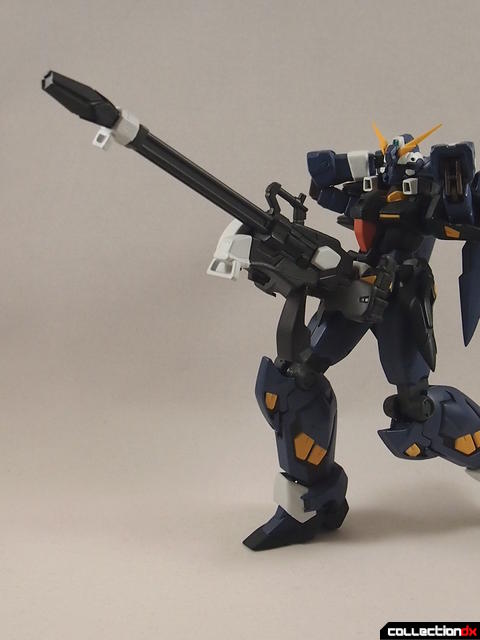 I am so sorry

This seems like a distressingly decent figure. Accessories seem actually good fun! Though


but it's probably not a bad idea to stay away

still seems like the best way to sum up the line.

I reviewed the 1:100 scale model kit that Kotobukiya made. It had just as many of the features, including the big gun, but it didn't show off TWO Chakrams.