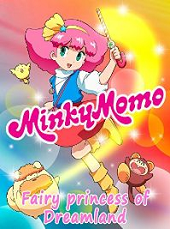 This is about dogs with British accents, horse saunas, and space winnebagos.

Click [HERE] to brainwash some people into being your new parents.

1 comment posted
"It's not my fault, it's the Reed!" or.... Pedo-Fodder Material

I forgot William Winckler was behind reviving an 80's IP as this. The "Gigi" name used in the dub was what was used by Harmony Gold years before, as well as a number of other countries the show was sold to like France and Italy. I'm' sure it was WAY easier to say than Minky Momo all the time!

I will say though the show is a kids shows to start with, so any seriousness is out the window anyway, this show would've fit in perfectly on Nickelodeon's schedule back in the 80's had it gone the cable route. What America did get for years was the one OVA brought over by Harmony Gold that I feel was a "thank you video" to the fans of the show, and there were quite a lot of grown men who really liked Momo in much the same way bronies latched onto My Little Pony. Reminded of this fan-made film just now!
https://www.youtube.com/watch?v=Y1LOKVwoVDA

This was the Gigi I saw thanks to having found a copy of that tape at a Big Lots for a buck! Although you mention the serious tone of this one, I still thought it had a good balance with the wacky stuff thrown in as well, though I suppose for first time viewers, that could be one way we latched onto Minky Momo at all thanks to this.

Ironically, it looks as if Harmony Gold did dub the show anyway, as it was aired on a station in Melbourne, Australia, according to these YouTube vids, even doing the final episode when she gets killed by that truck (SPOILER!!!!), though now I wonder wonder if this is the same dub Winckler used or not.
https://www.youtube.com/watch?v=YGzuQflYExs
https://www.youtube.com/watch?v=raxDfeYVSsw

Ironically, killing Momo off in the 80's wasn't enough, a new series was produced in 1991 that featured different designs for Momo's animal pals and another downer ending that would put Madoka Magica to shame!
https://www.youtube.com/watch?v=byHnENoOBf8

As for Ashi Pro/Production Reed, I don't really have much to say about them, though they did work on that silly Mega Man cartoon for Ruby-Spears. Apparently they did get to do a 3-part Mega Man OVA that didn't involve those 'grown-up' designs, though these were merely edu-tainment videos teaching kids about Japan.
https://www.youtube.com/watch?v=aRMLzAbtnOI