Okay, so this is a little odd: news of Toynami dropping a simple, articulated vinyl figure of seminal robot hero, Voltron III (Go-Lion in his native Japan), dropped quite some time ago--before San Diego Comic-Con 2009, in fact. Lots of folks waited patiently for it to come out...and then it was announced that a metallic paint variant would be released as an exclusive at SDCC.

Sure, that's totally cool. But...where was the normal one!? As it turned out, the Comic-Con exclusive came out first at--you guessed it!--Comic-Con, and the regular version...apparently just dropped a few days ago! 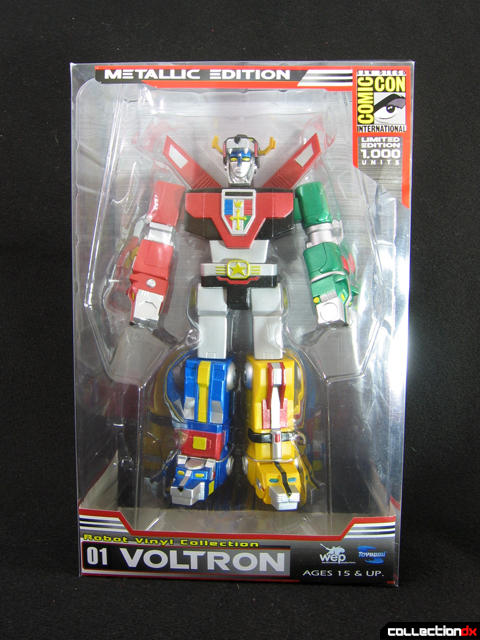 So...this is the San Diego Comic-Con 2009 exclusive metallic version of Toynami's Robot Vinyl Collection 01 Voltron III. Quite the mouthful, no? Hopefully, we'll see more characters done in this series (a Voltron I/Dairugger XV would be killer!), and we'll just update the review for clarity.

So let's get down to business. How's the toy? 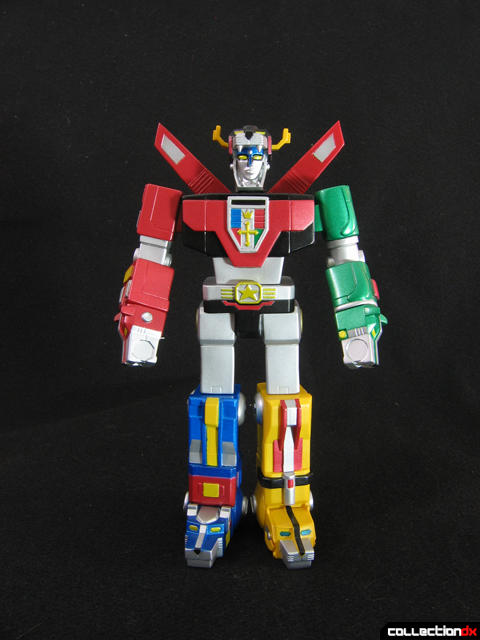 No, not a resoundingly enthusiastic endorsement, but as VF5SS is fond of saying these days..."it'll do".

It's a very simple toy, and as such, I think it's pretty easy to break down how to judge it. The way I see it, there are three things to look at: 1) what it is, 2) what other toys of this character exist, and 3) how much it'll set ya back. 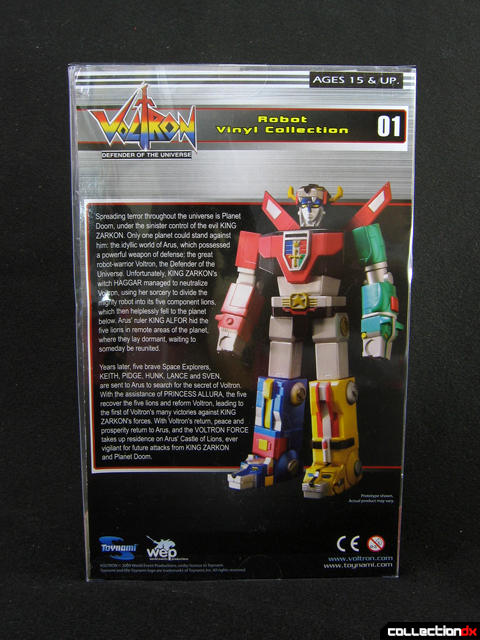 What is it? Well, it's a 9-inch, fairly "realistic"-looking, semi-articulated figure of Voltron III. It's completely painted Chinese vinyl, so it's certainly adequate. It's a far cry from the lustrous, hard, glossy sheen of genuine Japanese vinyl...but in the final analysis, who cares? It's a solid, cheap Voltron toy. 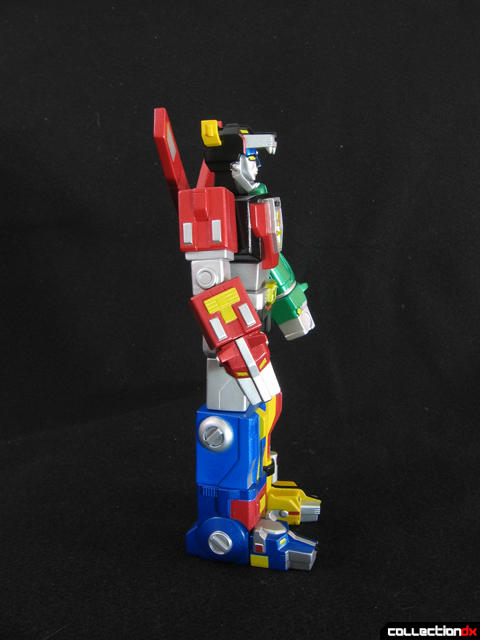 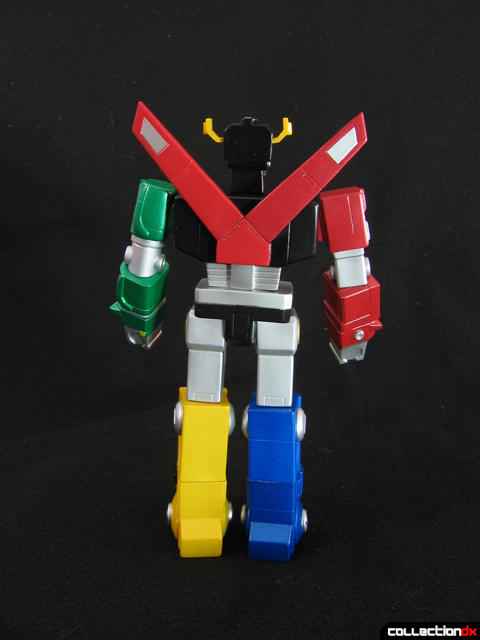 The vinyl feels pretty thin and lightweight (except for the wings, ears, and other extremities, which are solid vinyl and perfectly straight!). The paint gets a little tacky on hot and humid days. Oh well. Like I said, it's more than adequate. The articulation is interesting. The figure is already clearly posed, slightly...but they added bicep, wrist, and knee swivels to the prerequisite neck and shoulder joints.

Why? I'm not exactly sure. They don't add much posability...at all. It's actually a rather awkward toy. I mean, he looks like he sorta could be/should be dynamic, but he totally isn't...at all. Most vintage vinyl robot toys were purposefully given blocky proportions with very limited right-angle joints. AND WE WERE HAPPY WITH THEM, DAMNIT!! *Ahem*

What I'm trying to say is that vintage-style blocky proportions just look and feel right with limited articulation. It's like holding a Jumbo Machinder--you don't suddenly expect it to be as posable as a Revoltech. It's awesome just the way it is with its 2 or 3 points of articulation. This toy, on the other hand, has "realistic" (cartoon-accurate) proportions and styling, so you almost *expect* it to breakdance on your desk. Nope. 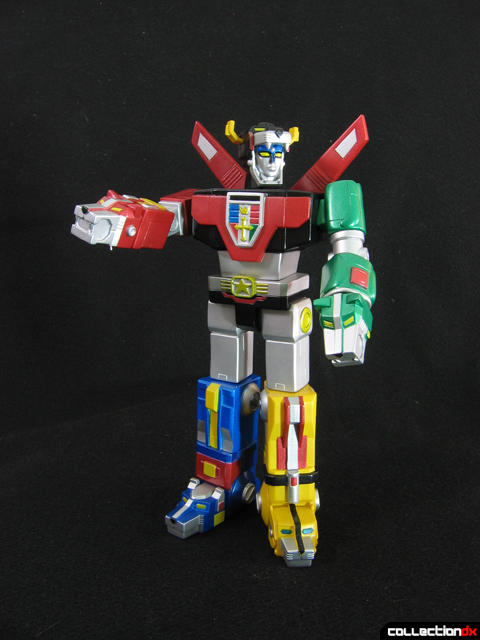 The sculpt, as I mentioned, does a great job of conveying the look from the show. There were a couple shortcuts I didn't appreciate, however. First off, the "hands" (the mouths of the red and green lions) are totally filled in. Booo! I know it woulda been tough to pull these parts from the molds if the hands had been hollowed out, but they really should've thought of a better solution...and then given us an ABS plastic Blazing Sword, damnit!

My other sculpt gripe is the lack of lion legs (whew). I know this figure is not meant to depict the transforming toy, but c'mon...it looks really plain without the visual cues that it can transform/combine. The arms look really naked to me. Most folks considering buying this toy are probably gonna be pretty familiar with the design. As such, I'm guessing they'll expect to see the chrome folded-up lion legs on the front of the arms and sides of the legs. 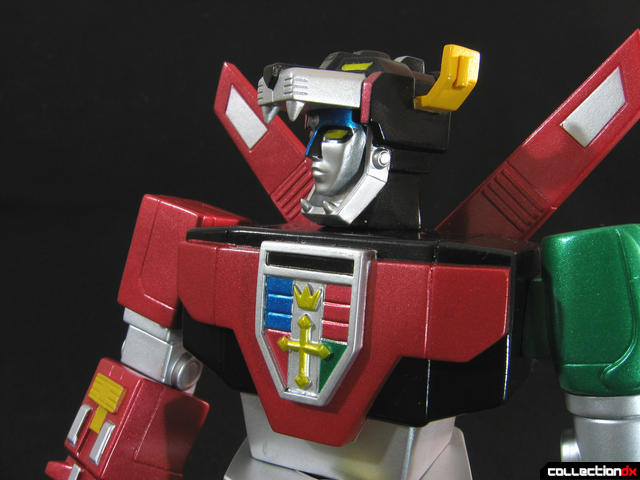 Lastly, the paintjob. Not bad. I gotta say, though...THIS is "metallic"??? I had to work pretty hard to get that sorta wet look in some of these close-ups. In normal light, he looks...normal. I can't imagine there being much difference between this and the actual normal version just released. Still, it's pretty cool. The barely-detectable glittery flake used in the paint makes the sculpt pop a little better. 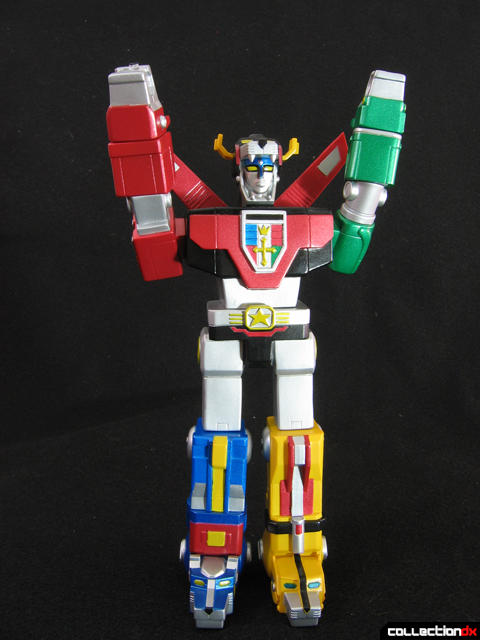 Okay, we've talked about what this toy is. Now, let's look at what Voltron III merchandise is already out there. Well, there are two deluxe combining diecast toys: the recent Toynami toy and the vintage Popy DX and its umpteen variants and bootlegs. There are combining plastic toys, as well, by Toynami and other companies during the 80's (Panosh Place...**shudder**). Popy released an ST chogokin and a Jumbo Machinder (later reissued by LJN in the States). And there's probably another eleventy-billion other Voltron III/Go-Lion toys out there...

Do ya really need another???

Well, that depends. Here's the deal: to my knowledge, there's only ONE Popy mini vinyl of Go-Lion. And that's it for vinyl toys of this guy! No standard-scale vinyls, no missile-fires, no nothing! So, if you're a vinyl head and you just need a modern-style sofubi Voltron III, this may be the toy for you!

Hey, think positive, will ya!? 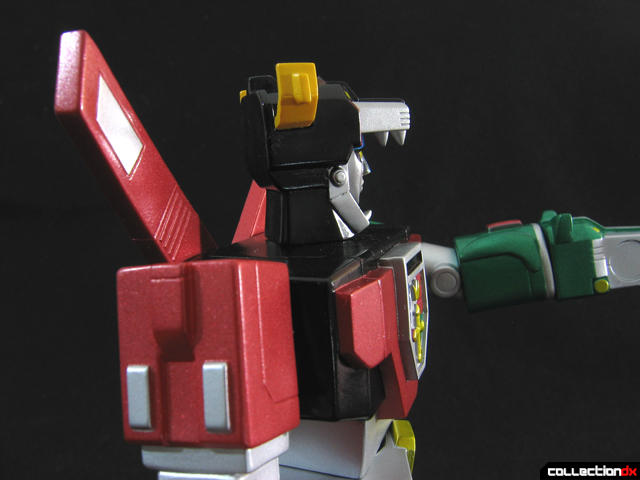 Lastly, price. I'm actually not sure what this guy retailed for at Comic-Con (shogundan, you wanna chime in?). I wasn't there. I do know, however, that the normal color version goes for $36USD. In the final analysis, that's not a bad deal at all. A modern character ST vinyl manufactured in Japan would easily run 2-3 times that, no problem. Onell Design's Armodoc is a Chinese vinyl figure that's shorter, but stouter than this guy...and runs you around $25USD...but Onell doesn't have to pay royalties on the name.

All in all, this figure is undoubtedly a *terrific* value despite my gripes above. That said, however, those gripes will really be the deciding factor in whether or not you want one of these on your shelf! 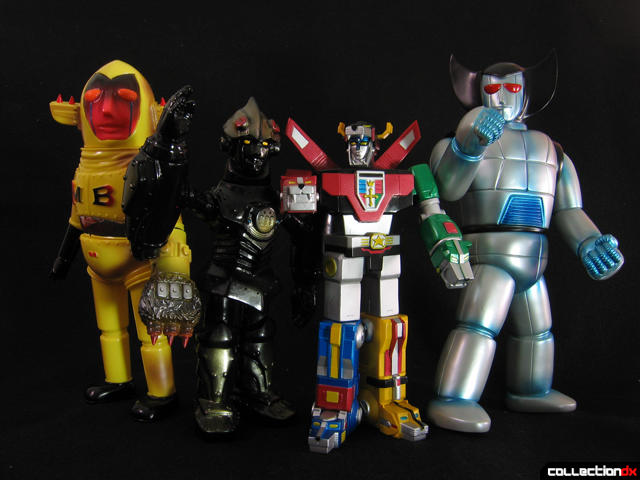 17 comments posted
What's with that all-black

What's with that all-black Big O? That thing looks cool.

This Voltron looks great. I would really like to have one - NORMAL colour of course. My only gripe are the "hands" (the mouths of the red and green lions) are totally filled in. High Dream can you do a perfect Golion/Voltron for us vinyl heads please?

Metallic is better than "normal" IMO. Voltron only looks "normal" in the show because it's a cartoon,they don't have metallic paint. They do try to use shading to give the appearence of reflective metal,but obviously that's limited.
If you were on Arus (SP?) right now looking at the real Voltron,it would be metallic.

Voltron is thoroughly pedestrian. However, I'm salivating over the Poseidon and yellow guy. I must have these treasures.

Those look awesome. Big O looks a little out there, with his bizarre proportions, but any Babel II merchandise is great.

Voltron's buddies in the final picture seem to be garnering more interest than voltron himself. I suggest that Poseidon and the others get reviews of their own.

It's not that there's anything wrong with the Voltron,but if there's anything a group of westerners who collect Japanese toys have seen plenty of,it's Lion Voltron.
At this point,the only thing to say is,is the sculpt accurate (it's fairly accurate) and are the paint apps clean (and they are clean).
So obviously there's going to be more convorsation about the other dudes.

Poseidon is a very friendly and lovable robot. I like him sooooo much. Babel II is one of my favourite anime - the classic version I mean!

Wow. Where did you see the original Babel II? It was a huge pain for me to get the Japanese DVDs and even then I can't understand it.

Hi, kindly contact me on Facebook or send me an email and I'll send you the links of the anime in Japanese/Italian in DVD quality.

Cool. What's your email/facebook? You can email me at feedback at destroy all podcasts d x dot com.

Hi sorry for the delay but I was busy watching.......VOLTRON.

Hehe...sorry for the tease in the last pic, guys!

Anyway, I just wanted to reiterate what I mentioned above, and something we talked about briefly the other night at Josh's during the stickaming. George Sohn/Toynami technically has the license for ALL of "Voltron". That includes the rights to make toys of Voltron I, II, and III.

Now, I'm pretty confident we're never going to see a Masterpiece-level toy for Voltron I/Dairugger XV...unless Bandai decides to stun us with an SoC. That said, I'd say the chances of us seeing a Dairugger--and maybe even an Albegas (Voltron II)--done up in vinyl like this guy aren't bad!

I mean, on its own, this figure is certainly fine...but as a one-shot, it's kinda lackluster. Now, if I knew there were *more* Voltrons coming out (or even some Robeasts!), I'd be a lot more excited about it. Then, you're investing in a toyline, not just a standalone figure. And let's face it: this Voltron III standing on your shelf is fine...but next to a Dairugger and Albegas done in the same style? DAMN, that'd be hot!

Write George a letter (or zap him some feedback through Toynami's website). Your voice counts!

And as for that last pic, the Big O is a Bear Model vinyl. There were two colorways to my knowledge: the anime-accurate purple, and mine--black with gold spray. The yellow guy on the left is Zollmen's "Mad Baron", a sorta designer vinyl homage to Red Baron. On the right, is Poseidon from Babel II, of course...by Shikaruna Koubo (yes, another designer piece). The Voltron just can't compare, in terms of quality, but at least he's not too out of place standing among these guys!

On the stickam chat the other night, I called out Sanjeev for having his pics in this review too big. It turns out I just happened to try to link to the only one that was big, while all the rest are perfectly sized to CDX specs. My bad! :)

Otherwise, I agree with the above sentiment. This toy would be much more enticing, and in fact the only reason I would want it at all, would be if they made Voltron 1 and 2 figures as well.

Were it also poseable in the hips, waist, elbows, and knees, I could see myself wanting one of these.

If it were possible to manufacture vinyl to be that posable, it would be no different from the combiners. Might as well add the gattai feature at that point.

Still, I get the posability thing: this thing was sculpted to *look* posable...though it's not. I would rather it have been sculpted with the proportions of a Jumbo Machinder (just in standard 9-inch scale) and just have those swivel joints.

Oh, and I agree about having a Blazing Sword. I thought about customizing one, then slicing up the hands to make a gap to wedge the sword handle into...

Of course, all's forgiven if a Voltron I and II are on the horizon!

I bought this Voltron in March 2010 - NORMAL colour of course. My only regret is that I didn't buy it earlier. Anyway, I got mine from an Italian seller and friend on ebay for Euro 32.90 (plus shipping). The sculpt is simply anime accurate. Right now I am watching Golion on DVD and the folded-up lion legs on the front of the arms and sides of the legs are never seen when Golion is combined! And so my only gripe is that the "hands" (the mouths of the red and green lions) are totally filled in. All in all, I am very happy with this toy. Thank you, Toynami.