The second entry in Maize's Toysmen Series is more like a continuation of the first, last year's superlative Mazinger Z. If that toy left you wanting anything, the only thing it left you wanting was MORE. Well, here it is, the Jet Scrander wing set! This set includes not only Mazinger Z's signature wings, but also a bonus set of Kyoukagata rocket punch fists.

As I usually do, I'll comment on the box first before getting to the toy itself. Although it is a companion piece to the Mazinger Z, it comes in a drastically different box than that toy. This one is a tight, compact box with very elegant and sharp corners. It projects a much more high end quality than any brown cardboard box has a right to. It's decorated with a 2 color printing with an old school design. It really harkens back to an old school space toy box. 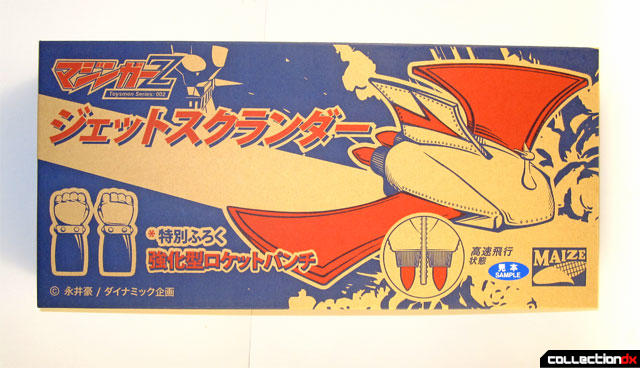 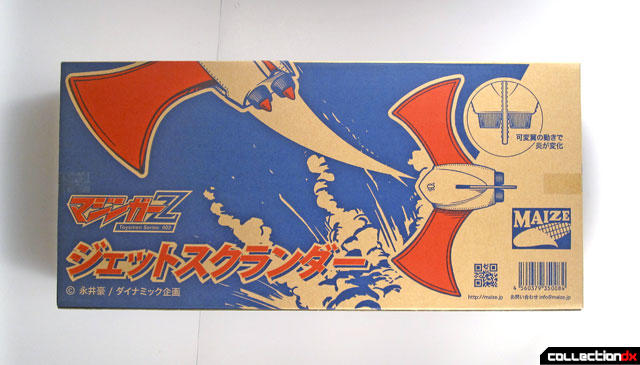 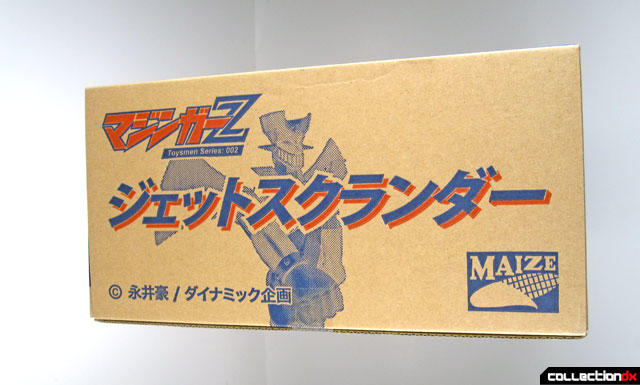 Inside the box, all the pieces are stored safely in plastic bags packed in a cardboard tray with cardboard inserts. A little bag with stickers and screws is stapled down, too. I didn't see any spot where the stickers are specifically designed to go so I think they're just optional. I think it looks fine without them, so I didn't apply them to mine. 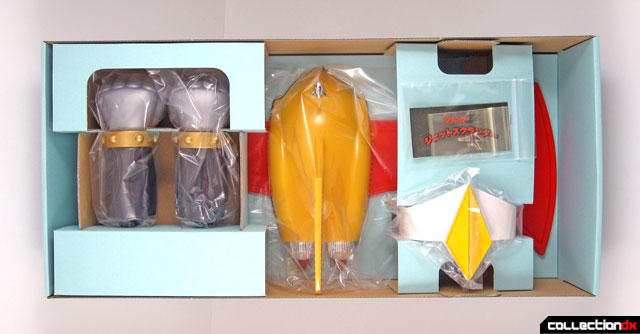 The cardboard inserts can be safely lifted out to allow you to access all the pieces. 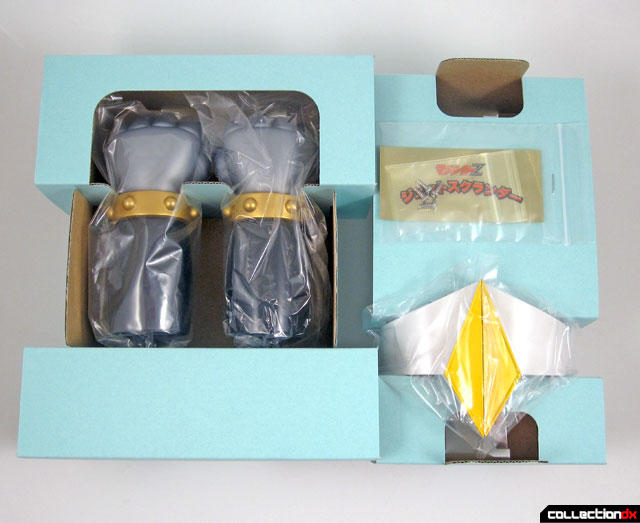 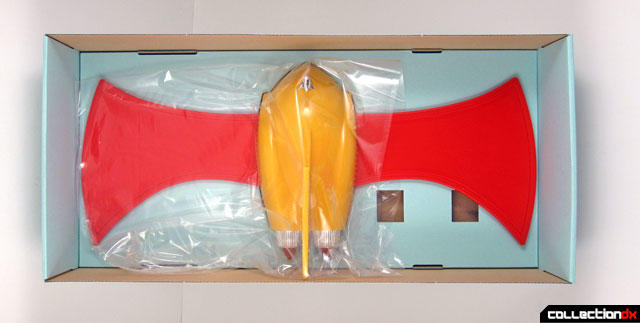 Here are the smaller pieces to the set. 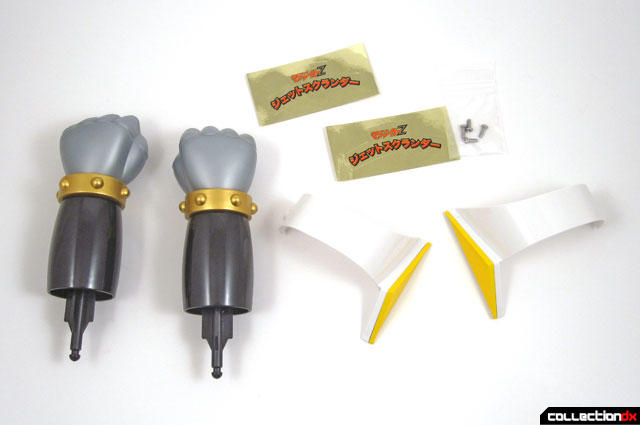 The belt of the Jet Scrander needs to be attached via the included screws. They are molded in such a way that they do not rest properly if you do not put them in right, which is helpful since there are not actual instructions included. However, it can be a bit tricky to actually screw them in if you don't have just the right sized screwdriver, since the belt curves back around to where your hand will be operating and because the waist piece attaches via magnets, which causes them to be attracted to the same spot. That said, it isn't too hard if you just take you time. The white of the belt is a flexible plastic so you can just push it aside. You only need two screws, one on each wing, to connect it but an extra two are included should you accidentally drop or lose one. This is where you attach the screws. 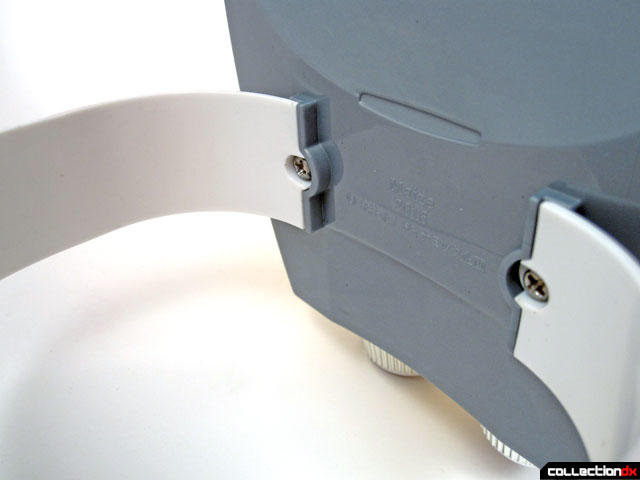 The front of the belt is also attached by screws, but these ones come already installed. 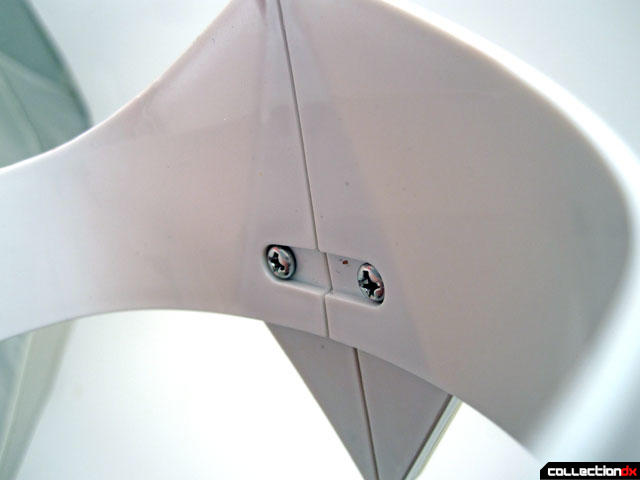 Once it is assembled, at a glance the Jet Scrander is very reminiscent of the vintage Jumbo Jet Scrander, either the Popy one of the Unifive one, but on closer inspection it is much, much nicer. It has a shiny, glossy yellow plastic on the main body with a nice chrome detail at the front and on the exhausts. The wings are nice red blow molded polyethylene that when placed on Mazinger Z, match up nicely with the red pieces on it's chest. 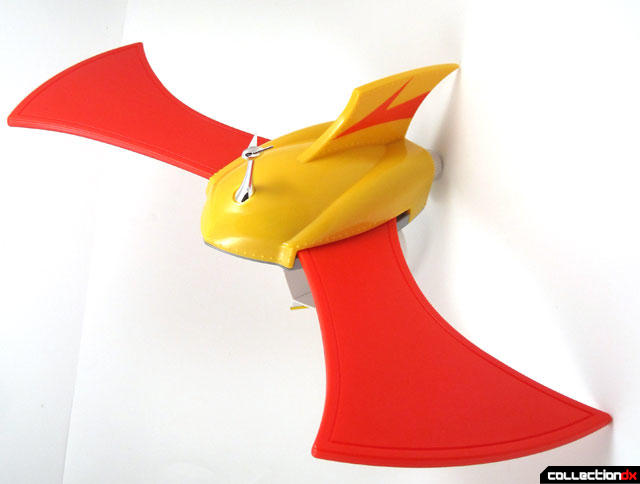 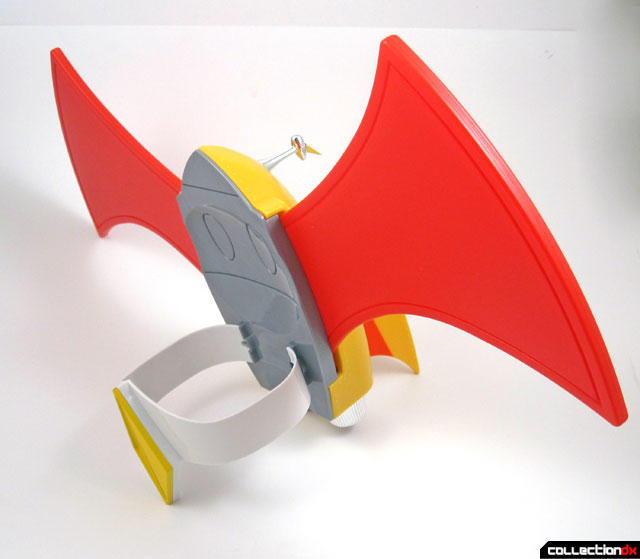 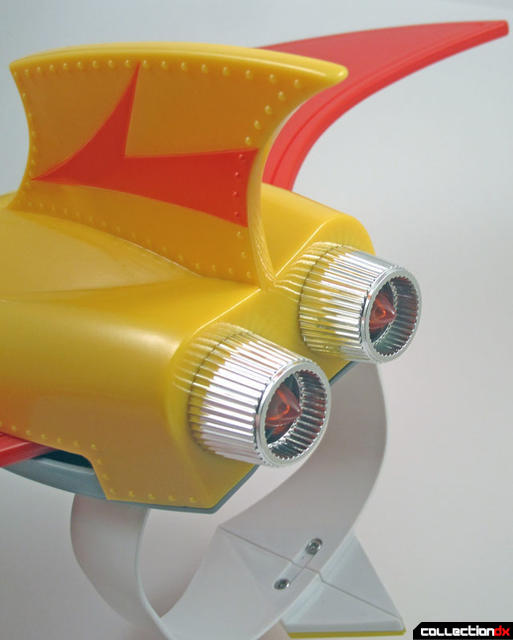 When you add the Jet Scrander and the upgraded rocket punches, the already amazing Mazinger Z flies to even greater heights. 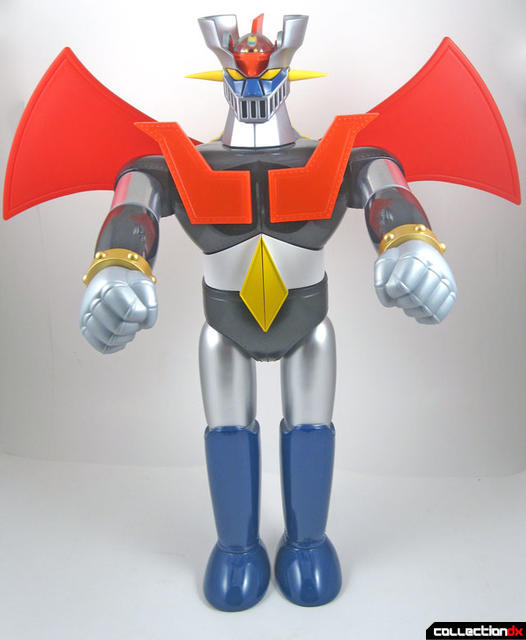 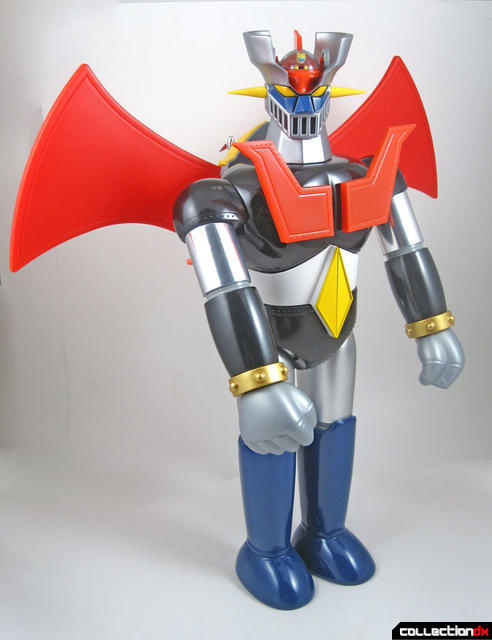 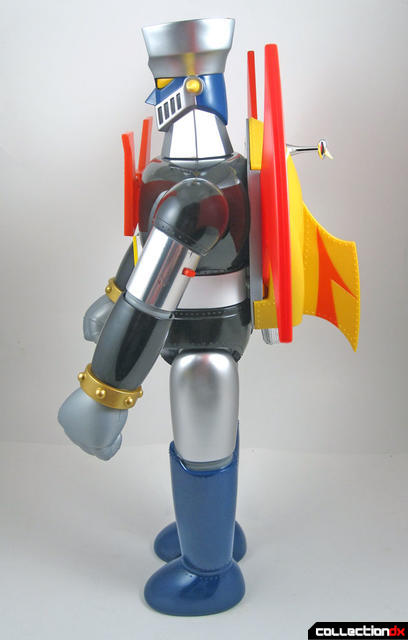 As I said earlier, the Jet Scrander wraps around the waist and the yellow parts connect via strong magnets. At first, I thought it might be a bit awkward to separate them, but I've found that the trick to doing it is to place your thumbs on the the top of the yellow parts and push them apart, rather than trying to wedge in between them. 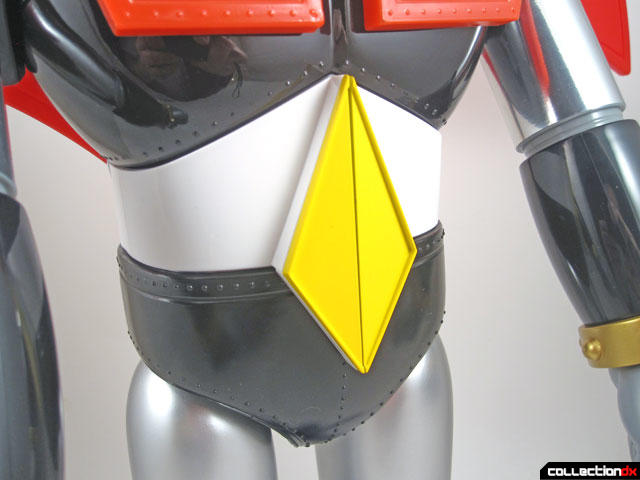 Where this Jet Scrander really surpasses the older ones is in the articulation of the wings. Yes, you read that right, the wings here can be raised and lowered to represent the different flight modes of the robot. Better still, when the wings move down, flames extent out from the exhausts! The wings click into each position and remain in place. 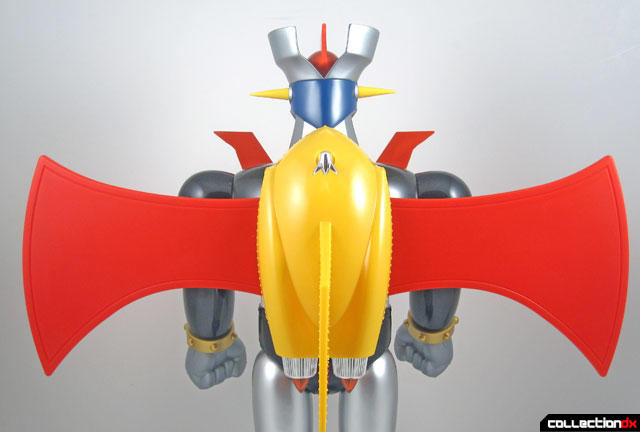 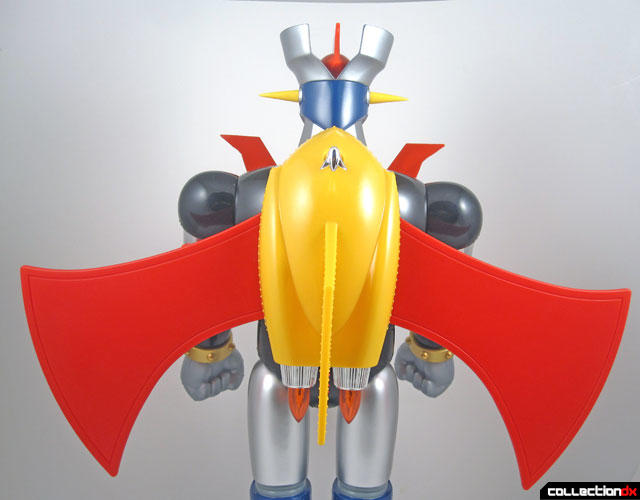 The flames themselves are clear plastic with a secondary detail inside to give it a more realistic appearance. 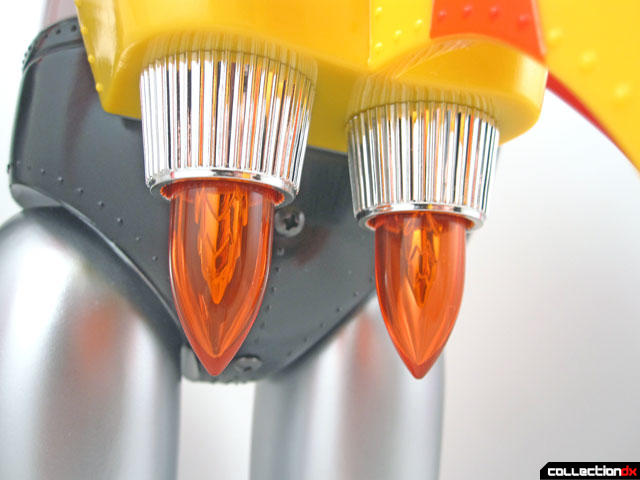 In my opinion, the Toysmen 001 Mazinger Z is arguably the best Mazinger Z toy out there and as great as it is on it's own, it only gets better when you add the follow up Jet Scrander and rocket punch set. If you already have (or plan to get) the Mazinger Z, you owe it to yourself to add this set as well. You won't be disappointed. After the initial release of the Mazinger Z, people were flipping the toy at auction at exorbitant prices almost right away so I highly suggest you order directly from the source before they are sold out. The set retails for $230 plus shipping and can be ordered from my friend Alan at the addresses below:

I love how the transparent flame element with the flicker gimmick complements the Popyness of the Hover Pilder from TS:001. The whole thing just looks timeless. Can't wait for their next release in the Toysmen Series! :D