The Shogun Warriors. Invincible guardians of world freedom. These toys are the ones that sparked our imagination back in the late 70s, and shaped our idea of cool. Not everyone had a Shogun Warrior – at the time most kids were busy with more affordable toy lines such as Star Wars, Micronauts and Mego Super heroes. But those of us who got them knew that we were onto something special. 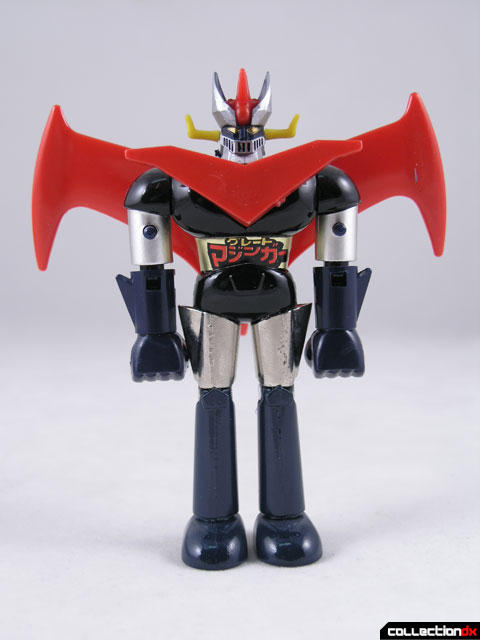 Great Mazinga was one of the original Shogun Warrior characters, and probably the most recognizable. You ask people of that generation if they had one, and they may not recall the name (“Great something?”) but you describe the bright red V on the chest and they go “That’s the one! It shot fists!” 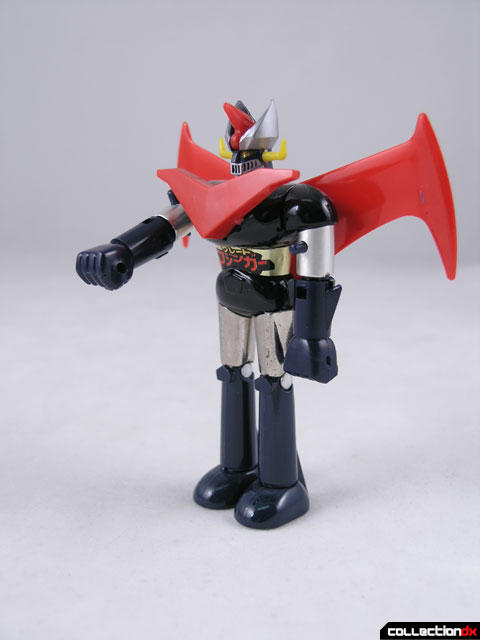 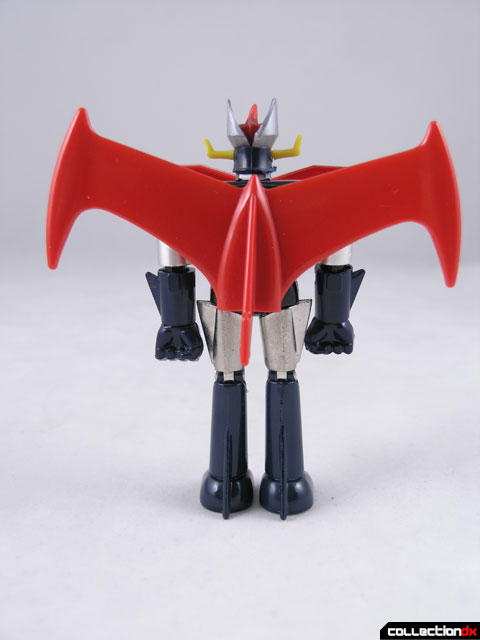 The version shown here is the second version, a greatly dumbed-down version for the american market. Gone are the knee and waist decals. Gone is the multi color scrander with chrome engine nozzles. Nope, this one was clearly designed to be cheap and easy.

It's still a good toy, and its likely the one most kids got back in the day. The whole body is diecast metal with plastic being reserved for the head, chest V and arms.

The arms shoot off with a satisfying "Plink!" when the buttons on the arms are pushed.

Great Mazinga comes with two cheap red plastic swords. These can be held in either hand, but cannot be stored in the legs like with the Jumbo Machinder version. 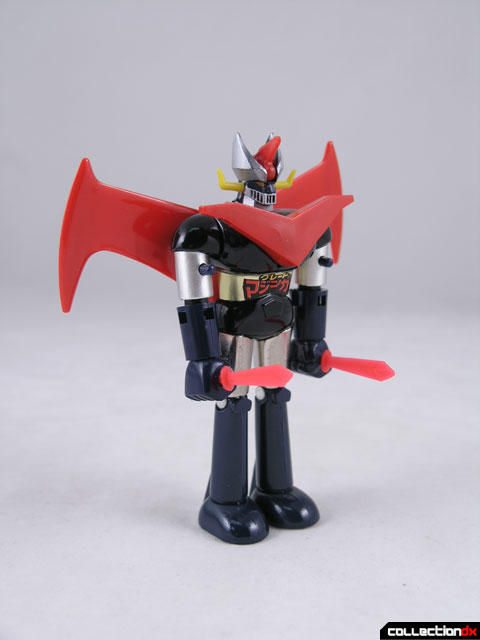 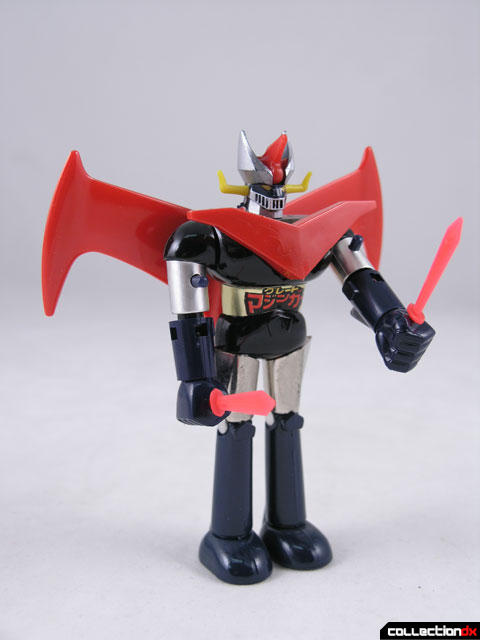 The box is a classic example of 70s package design, with the clear plastic tray, die-cut window and side flap. This particular specimen is from the Josh C10 Fraser collection, and I have tried my best to keep it C10. I believe this came out of a sealed case. Yeah, I opened it. 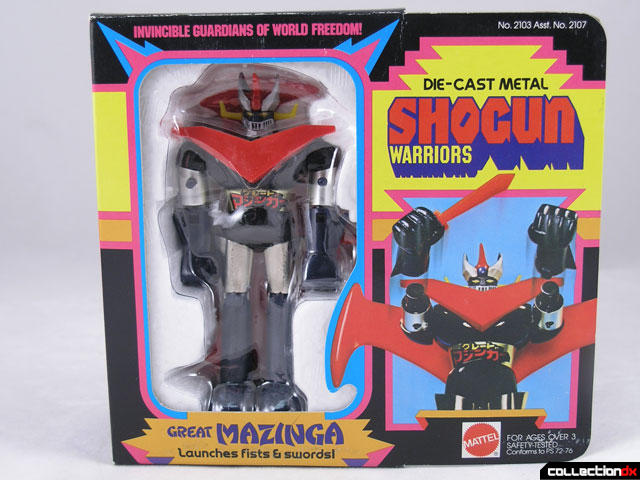 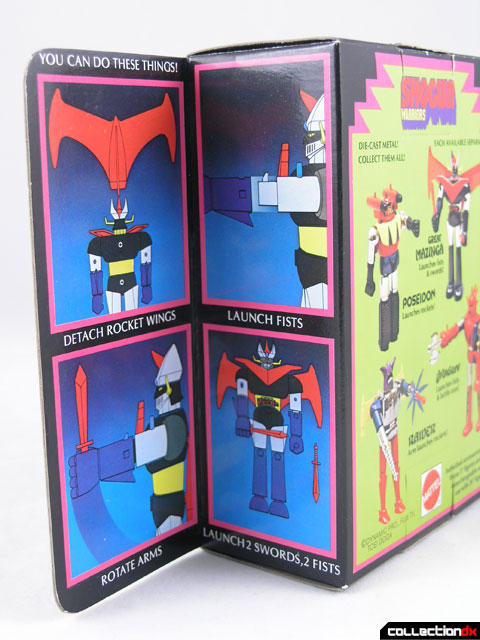 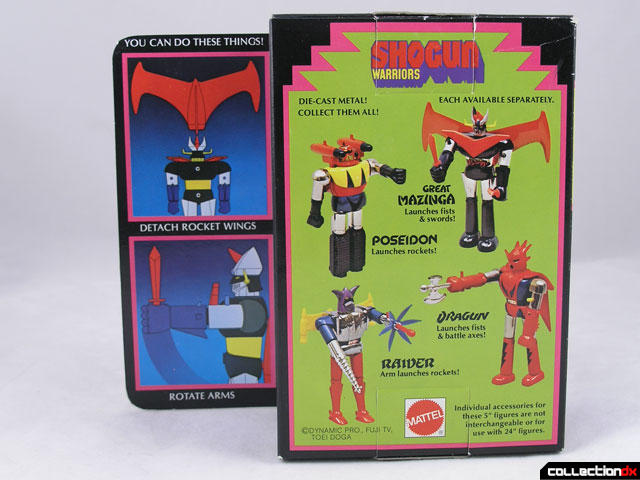 To me, this guy (or any version thereof) is one of the cornerstone pieces of any vintage Japanese toy collection. It is relevant in so many ways, it set the stage for so much that was going to come. One can argue that this toy was the one that sparked the imagination of kids in the late 70s, fueling our now current frenzy for all things giant and robot.

These are still some of my favorite toys to this day. I was able to get some sort of reissue of Raideen a few years ago. The white bird parts are changed to red for this release. Any idea if they did more of the old molds in a newer line like that? (SoC is incredible, but too expensive for me.)

I have the Raideen re-issue as well. It is the GA-09R. This is an excellent update done to the classic with more metal in the legs! I just recently acquired the GA-09RG in an auction for a song. This one is done in all GOLD and the release was a limited exclusive from a Japanese toy show.

I really agree with you that to re-release slightly upgraded versions of these like they did with the GA-09, would be a big hit! I know I would get them all.

One other re-release that I know of (cause I got him) is GA-02 Getta 1 Robo. They put out a "Training Version" with a pearl white and purple paint scheme. Awesome figure, and heavy! Josh claims that it is bootlegged in his Getta 1 review. Either way, it is still very cool and well made. Sanjeev alludes to "The Chogokin" repros in that review's comment section. I'm not aware of those so maybe Sanjeev could elaborate?

Ahh- Sanjeev must be talking about Bandai's GT series of chogokins. Nice copies- slightly smaller than the original GA series.
I have many of them as well.

Yup: the GT series is referred to as "THE Chogokin" (note the completely capitalized "THE"). They're really killer. But I agree: full-size reissues would be sick and I'd totally throw down for all of 'em.

Still, I'm not holding my breath because Bandai would have to create all-new tooling as I'm pretty sure the original molds are long gone. And they're only going to make that sort of committment if they're confident of their profits...and despite our fanboy love, I'm guessing they wouldn't pull in as much as if they devoted their resources to another SoC... :/

GA-05 (US version, just like above) was my first Chogokin and Super Robot as well. It's a solid and fun figure with the right combination of gimmicks, articulation, and durability. Just need some swords for mine. It's still a more fun toy than the SOC Great Maz.