In the late 1970s/early 1980s, when Jumbo Machinders were popular in Italy, several companies released bootleg toys based on the Popy Robot Factory style Jumbos. One of the most interesting ones was Titan, released by a company called "Ceppi Ratti". This was probably one of the most famous and prolific toy companies in Italy at the time. They released the near impossible to get Gundam Jumbo, as well as many other Japanese character toys in diecast and plastic forms. 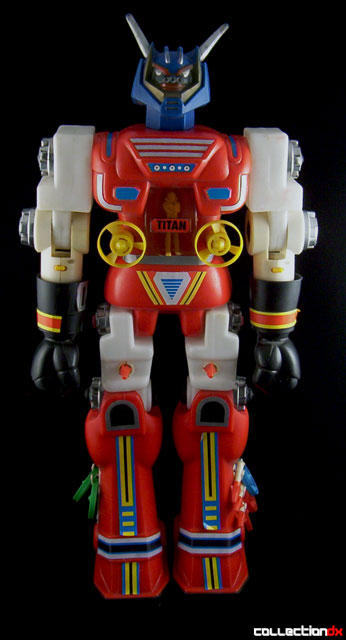 Titan is interesting because it contains components of several different character robots. The sculpt of the legs and upper arms are from their own Ceppi Ratti Gundam toy. To date, there has been no evidence to support the existence of an offical Clover Gundam Jumbo, though rumors persist. The lower arms and torso were taken from the Popy Gordian Jumbo. It even included the clear plastic opening cockpit into which you can place a small plastic pilot. 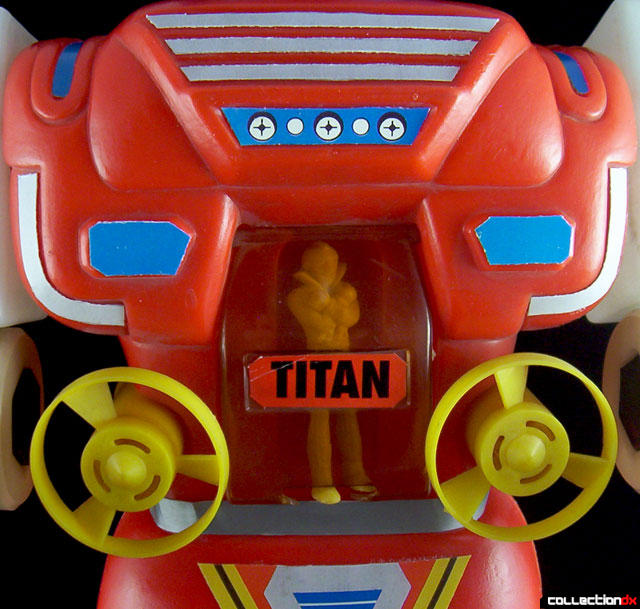 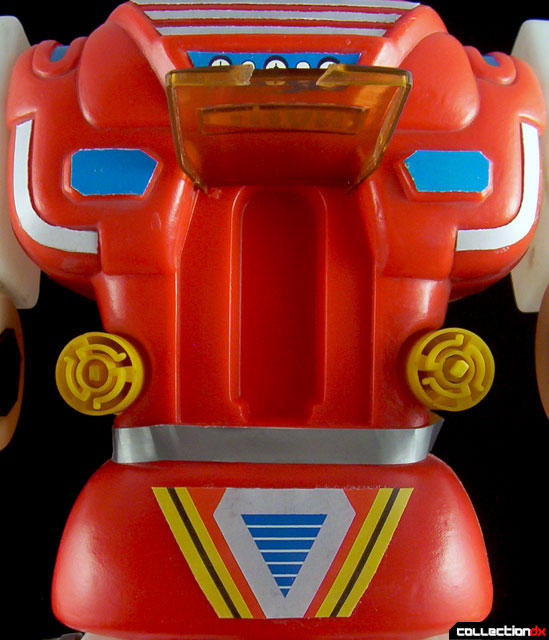 The head may be the most significant feature of the toy though. It depicts Groizer X, a character who has never been seen in Jumbo form at all! Nakajima would have owned the rights to this character at the time, but no other evidence exists to suggest that a Jumbo version was ever made. Since this sculpt of the head on the Titan toy is so well done (much better than you would expect from a bootleg), some believe that Ceppi Ratti may have gotten their hands on a prototype Jumbo Groizer X head that never made it to production and used it to make a mold for this toy. This is a very intriguing theory, but cannot be confirmed at this time. 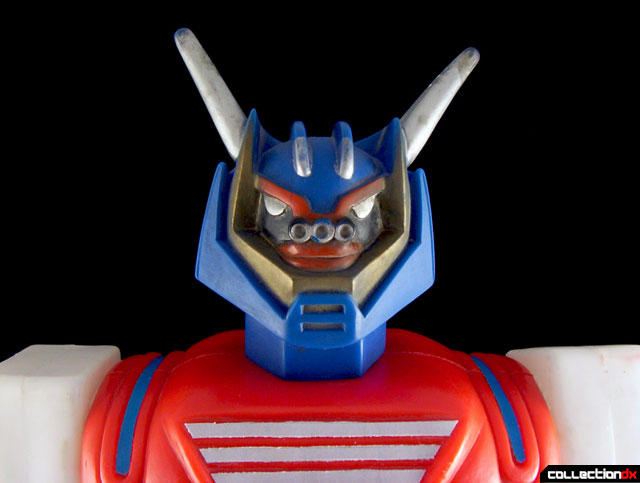 I can say for certain that Titan is a very unique looking Jumbo and would add a great dash of variety to your lineup. The problem is that even though it is not nearly as hard to get as the Ceppi Ratti Gundam, it is still extremely rare. I only know of a handful of other collectors who have it. And even though this toy is of a much higher quality than other Italian "robot factory" Jumbos (such as "Space Valour" and "Super Warrior"), it is still common to see it broken or missing parts. Mine has several of the missile clips on the right leg broken off. As you can see, each leg comes with SIX clips that you can store either the missiles (which shoot from launchers on the front of the thighs) or the multi-colored discs (which shoot from the launchers on the sides of the waist). The disc shooters on mine barely work as well.

You get typical Jumbo movements here. The head turns and the arms raise and lower. You can also bend the elbows, but that is about all. Both fists shoot in addition to the previously mentioned weaponry.

The toy comes packaged disassembled in a box measuring 15" tall x 11.5" across x 5.5" deep. The front of the box has a nice painting of the robot while the back show all the included parts. I'm not sure if there was a more detailed instruction sheet that was supposed to come wtih it (I don't have one, and I doubt it exists), but a sticker sheet to add all the color details was. My specimen was missing it, but I managed to get a color copy from a fellow collector. The glossy silver is hard to replicate though so if some of my stickers look a little dull compared to how they should look, this is why. 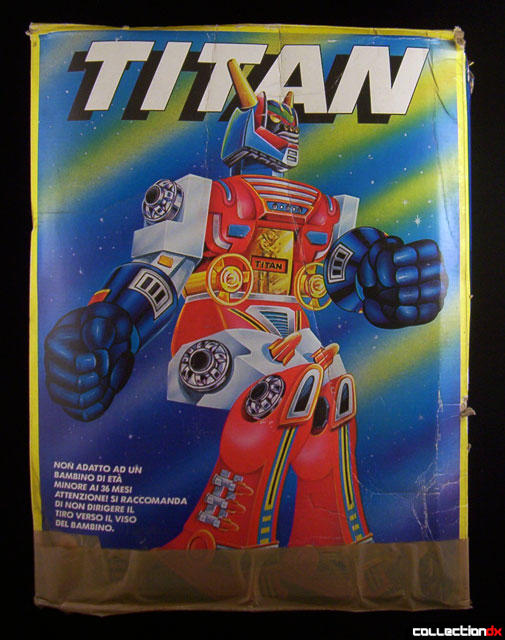 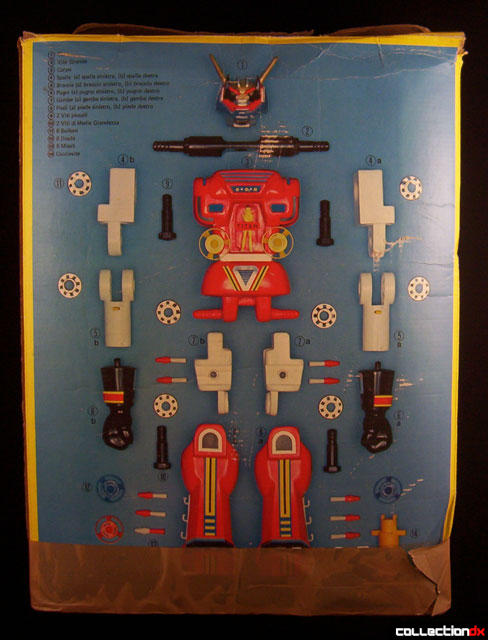 As you can seen, unfortunately my box came with some packaging tape wrapped around the bottom. I think the box must've gotten wet at some point and needed some reinforcing. One last interesting thing about the box that I didn't know I until I got this was that it closes differently than other bootleg "robot factory" jumbos. Instead of just the lid just folding into the box, it actually forms a handle you can carry the box with.

I should mention that if you have one that is missing parts, such as the nuts and bolts, that they are NOT compatible with the much easier to find "Space Valour" toy. So it will be a little hard to find replacement parts. Also, one prominent Italian toy dealer says he's seen this toy with an entirely white body. He's not sure if it was released that way or if what he saw was a prototype. There is also a known variation in the paint on the head. 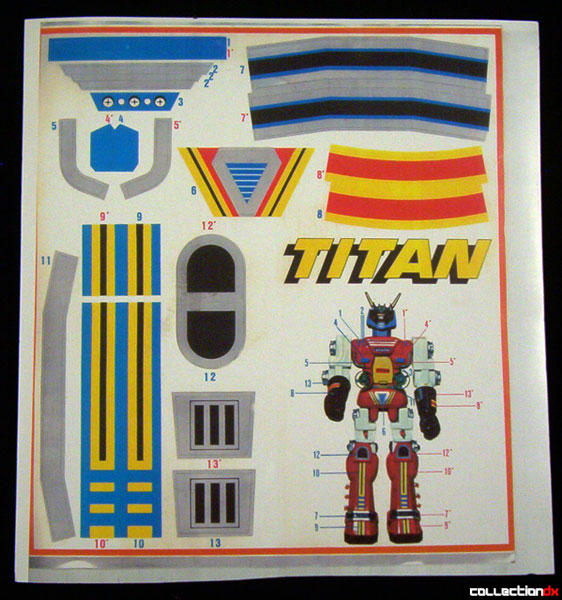 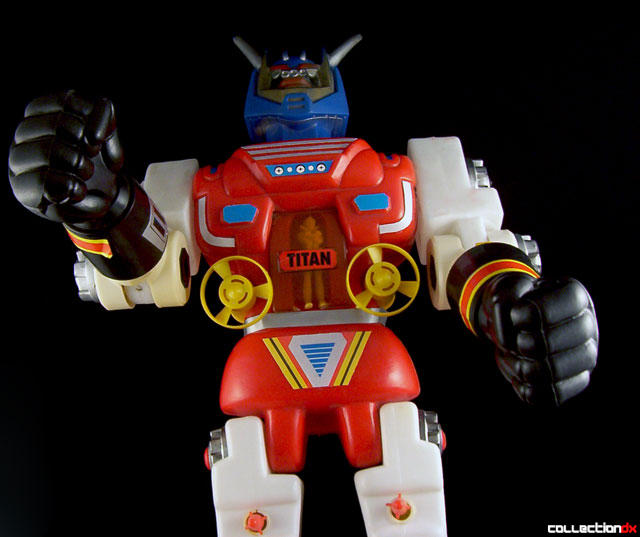 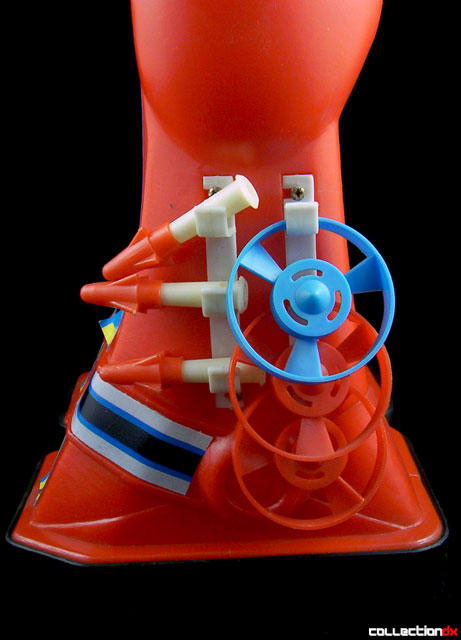 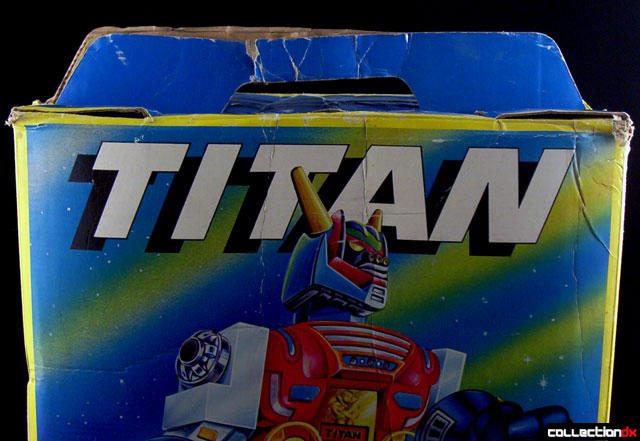 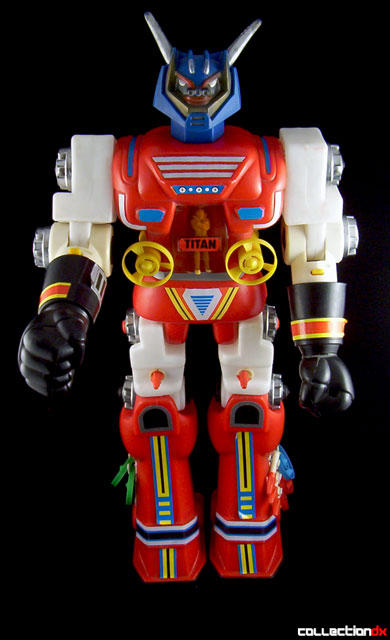 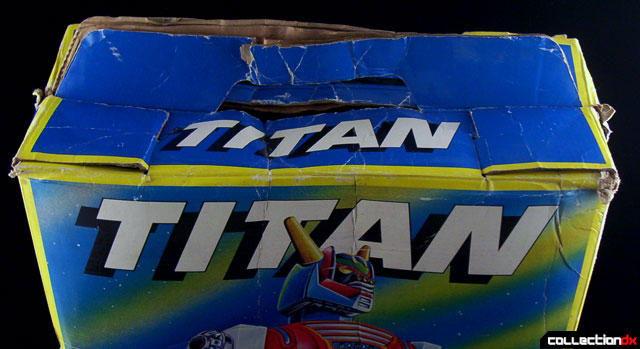 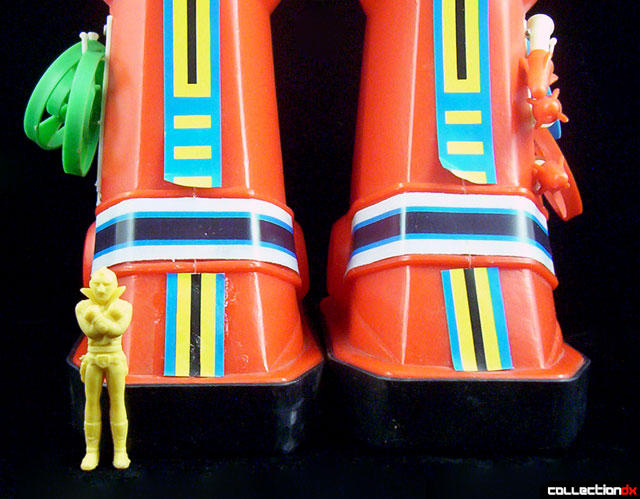 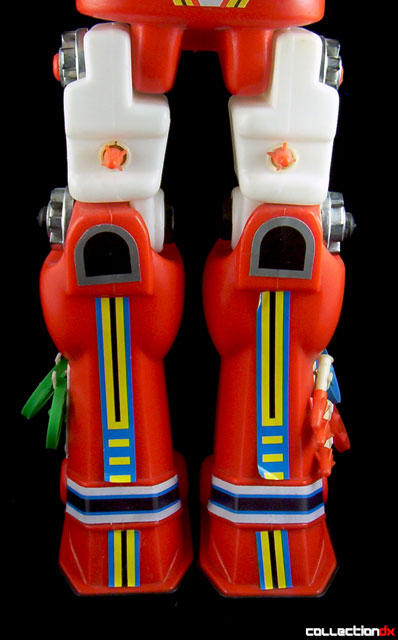 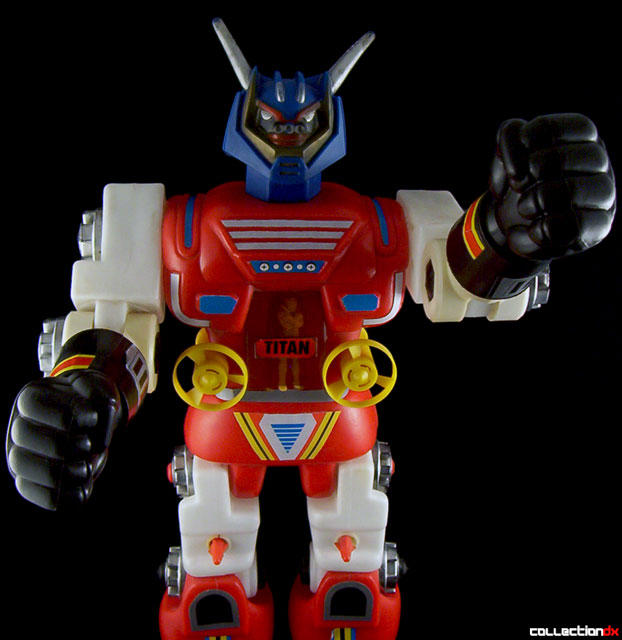 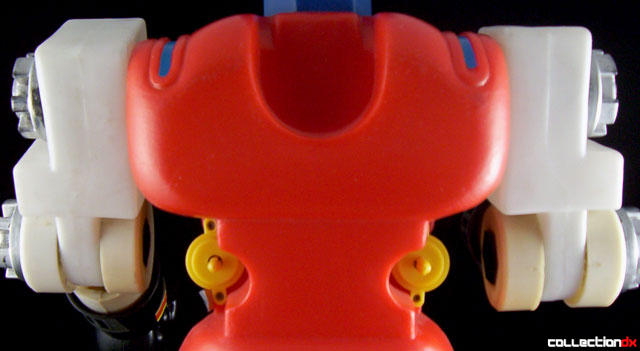 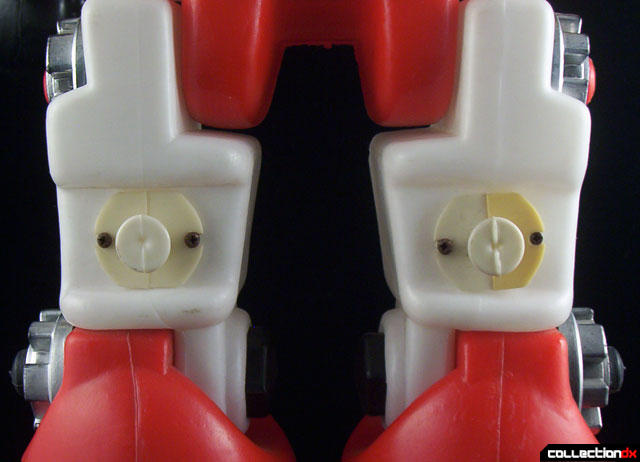 Nice review, Dave. Do you have any friends that have spare parts or the sticker sheet for sale or at least a scan of it? Thanks.

I wish. I'm still looking for a bolt for my arm and some missile clips. I thought I'd gotten the bolt, but the one I got wouldn't fit and frankly, I don't know what jumbo it's for as it doesn't fit any of my others either.