The Transformers Classics figure of Skywarp- though a repaint of Starscream - is a completely new toy based off of the original that appeared in the classic G1 cartoon series from 1984. Ultra Magnus, also, is a repaint of the brand-new Transformers Classics Optimus Prime figure. However, the original G1 toy of Ultra Magnus first released in 1986 used a specialized red and blue car carrier trailer to create his more-commonly known larger robot form. (The trailer is not represented in the Classics line, though one can only hope that someday it will!) The molds between the two figures are identical to the ones originally designed for the 2006 Classics line. Alas, with rare exception are either Ultra Magnus or Skywarp not represented as repaints in toy form even though they are different characters; so in this they also share with their predecessors. 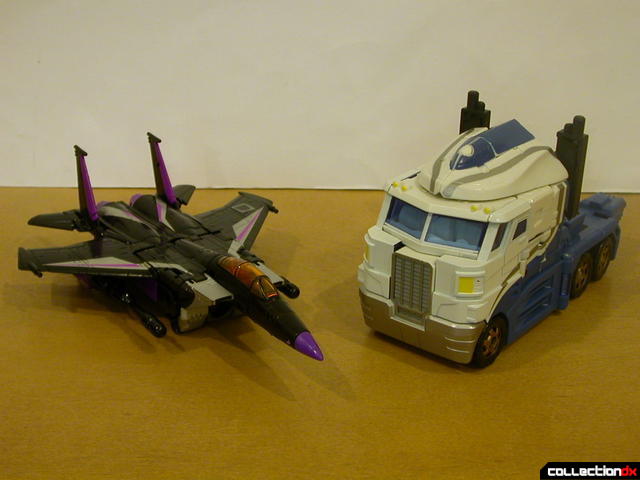 Go on to read about Ultra Magnus

Go on to read about Skywarp

In recap, these are good toys. I got Ultra Magnus because of my highly enjoyable experiences with the Classics Optimus Prime beforehand; and I was curious about the Starscream design, but didn’t want the somewhat-patriotic coloring of the character, and so got Skywarp. These two were only sold in a Target-exclusive set, and fortunately were cheaper together ($20.00) than having to get them separately (Prime = $25.00, Starscream = $15.00). Complaints are few since both designs are good. Really, the only big complaint I have is Ultra Magnus’s somewhat plain and dull paint apps compared to Prime’s. Some things they could have highlighted in the same ways- lights on the knees, silver torso paint, paint on the sub-machinegun, perhaps a little silver on the waist and upper legs to make him more color-coordinated with his G1 roots- little things like that. But the details and transformations and functions are still awesome; for both characters. Hasbro also chose repaints of well-known G1 characters that actually work with the Classics molds, instead of a wannabe like the Devastator combo figure from “Transformers: Energon” (2005) which was repainted for the Classics line. These are good figures, very well made and well designed. They may be repaints, but they are still worth it, and you don’t have to be a completest in order to like them. I say the Battle for Autobot City set is worth it. Highly recommended! 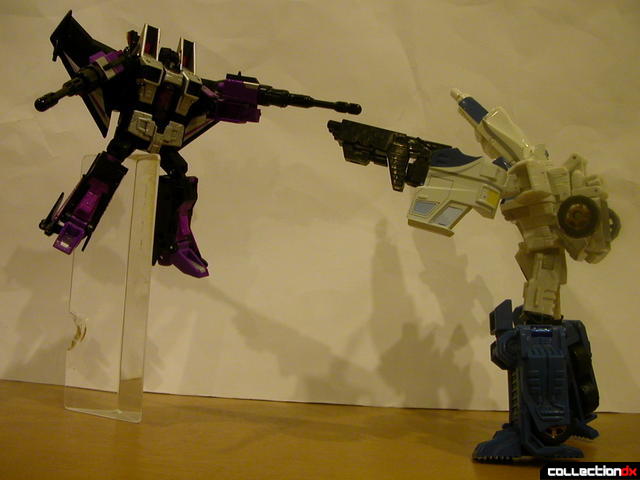 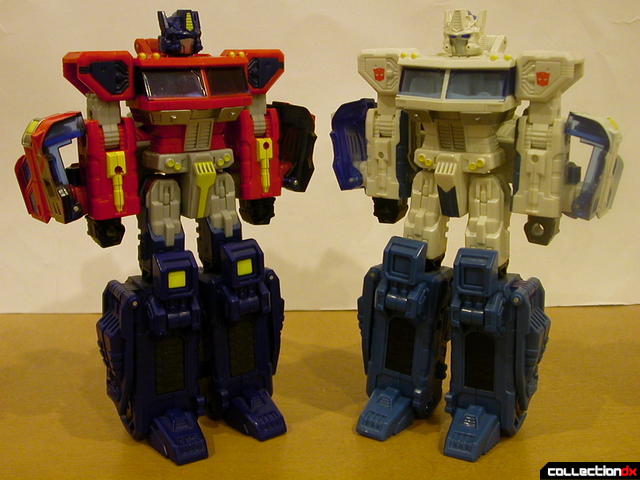 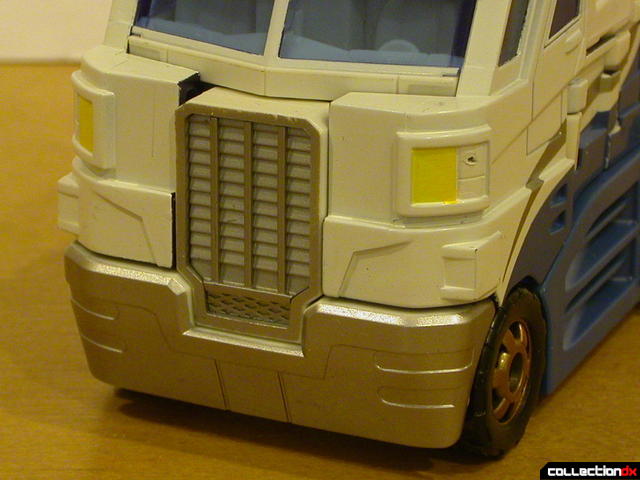 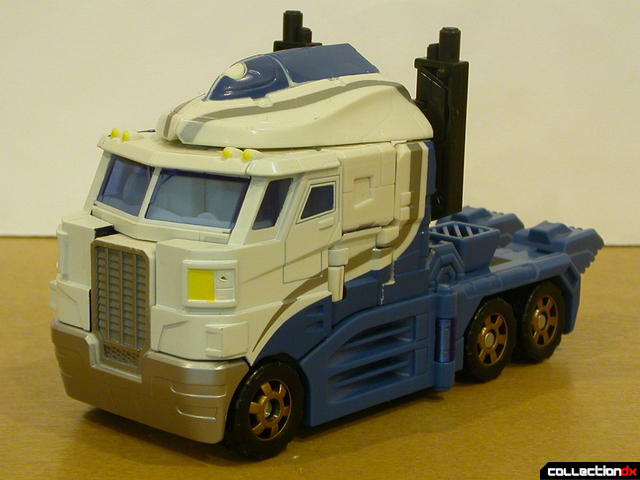 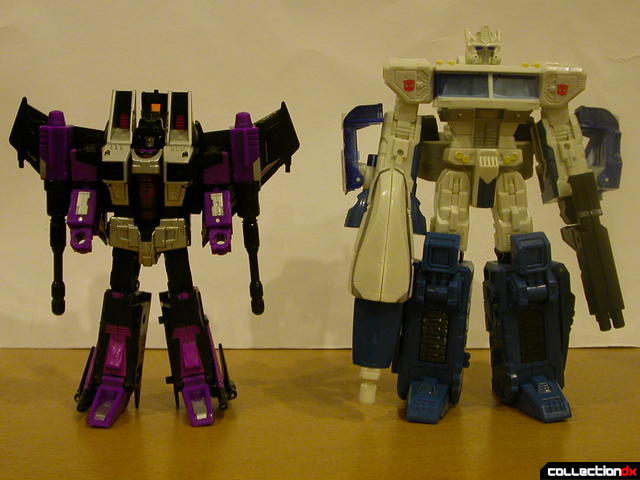 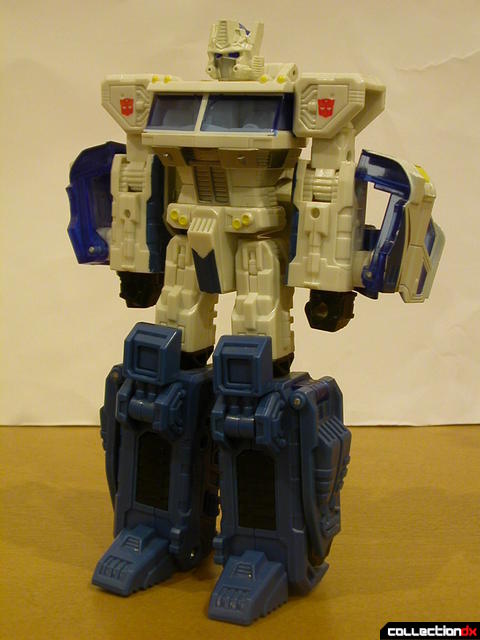 This really is a great set, but I had trouble with Skywarp; his right arm was loose and there's nothign I can do to fix it short of tearing his arm apart, but it doesn't matter too much.
As compared to buying the BOTCON 07 set, getting both this pack and Prime and Starscream seperately are relatively cheaper in the long run.

Meantime, I agree on what you say about Magnus' bland color scheme, so I tried fixing mine with some touch ups.
Especially the head, where the vents in his forehead and his mask are shown to be cobalt on the package (as well as in every other Magnus incarnation). Its a simple mix if you want to try it for yourself:

It really brings the face out to full detail.

My Skywarp's shoulders are just the opposite- really tight. More often than not, when I try to raise the shoulders, that transformation joint moves out instead. I'm guessing that mine is just screws that are too tight in the upper arms, but I haven't the heart most of the time to take tools to my collection unless it's to glue something back on.

Yeah, Nail polish works. Obviously, you want to use clear whenever possible. Another quick fix is electrical tape, cut a small square that is just big enough to cover the ball and pop it back into the socket. This works best on joints that are not visible. I had to use this fix on my MP Optimus Prime's ankle joint, and I use this mostly on polycap joints from Gundam model kits.

I had a problem with loose hip joints on my Skywarp.

Cool. Do you add it in layers, is it a one-time application, or does it depend on a case-by-case basis? How does it react to the plastic it's applied to? Also, over time and with use, does the polish wear/peal off, requiring another application?

If the joint isn't tight after the first application, you can layer it. However, I can't really remember an instance where one coat didn't do it. It doesn't affect the plastic that I've noticed. It is, after all, just glorified enamel paint.

It will wear out over time, I guess. I haven't really played with my figures enough to find out.

I've heard of the super glue technique as well in times where nail polish wouldn't adhere to plastic as easily; something about some materials being resistant to adhering paint of any kind...