Here we have another entry from the Quick Change Insect Robot line. This time a locust! (or cricket...maybe a grasshopper?) Out of all the insect robots I have, old Locust here is my favorite. Unfortunately it's by design wise only. Read on and you will see why... 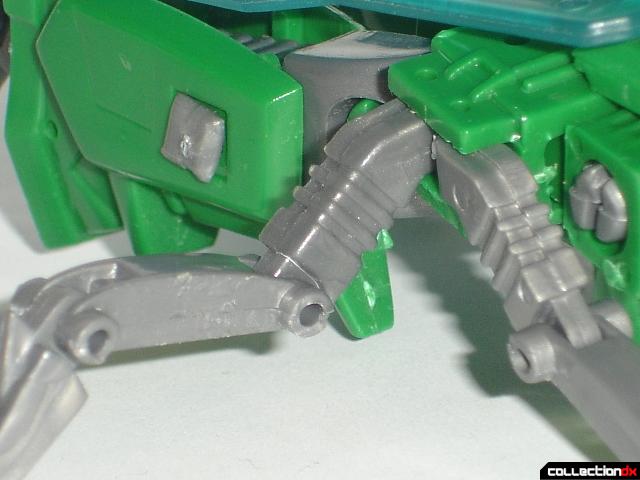 In beast mode Locust is green with grey legs, yellow antenna with a silver base, turquoise wings, and bulging red eyes. 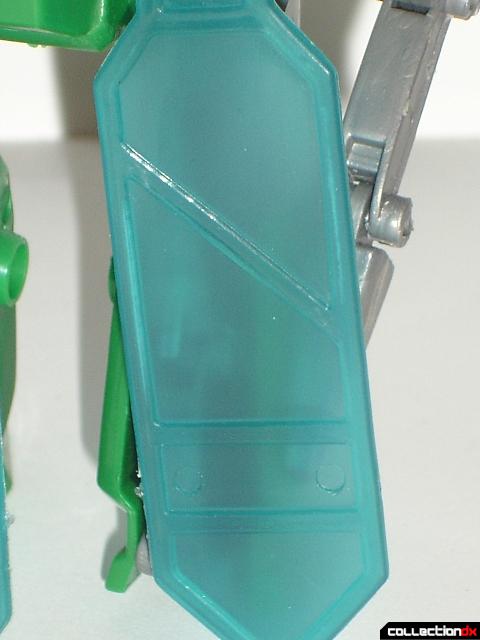 There were some cheap stickers on his wings but all of them fell off except one. He has a whopping 20 points of articulation in this mode. All the legs have three points each and both the wings flop up and down. One thing I noticed is that his transformation, design, and alternate mode are very similar to the Insecticon Kickback from the Transformers line. Here's what he's really based on which appears to be a very simplified version of this. 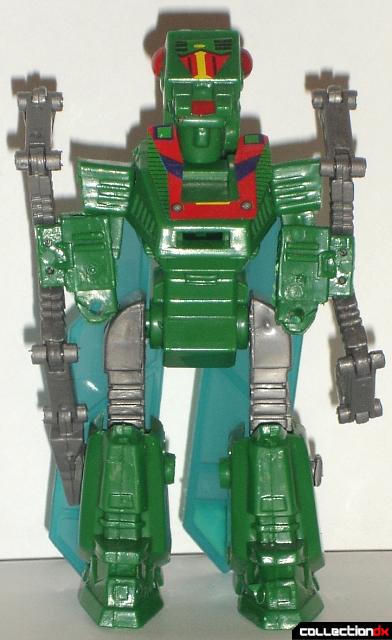 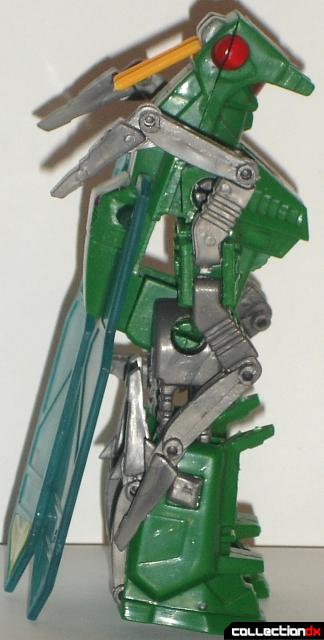 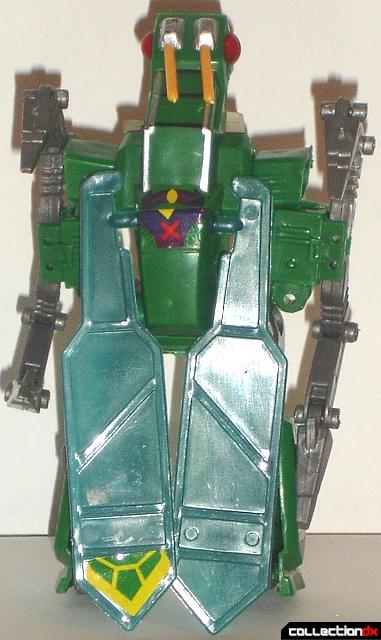 In robot mode even though I absolutely love the design, he's very loose and his beast mode legs as well as his robot mode arms have a bad habit of falling off. Everything is loose including the wings. Most of the stickers have fallen off so no need to worry about those. There are no new colors except more red and yellow with the help of some gaudy, cheap looking stickers and there's also two more stickers on his back with small bits of purple and dark blue on them. 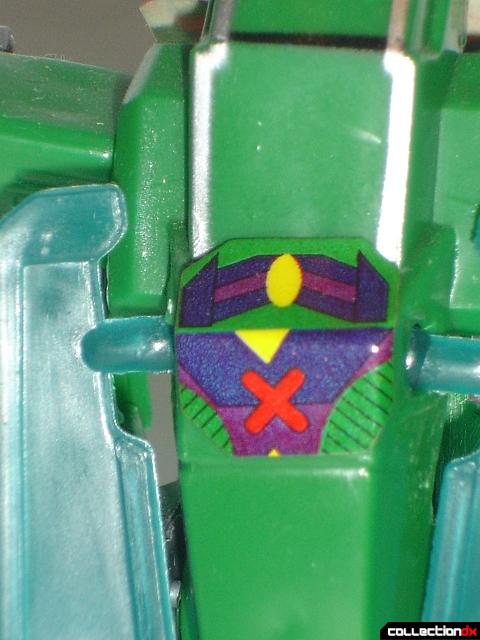 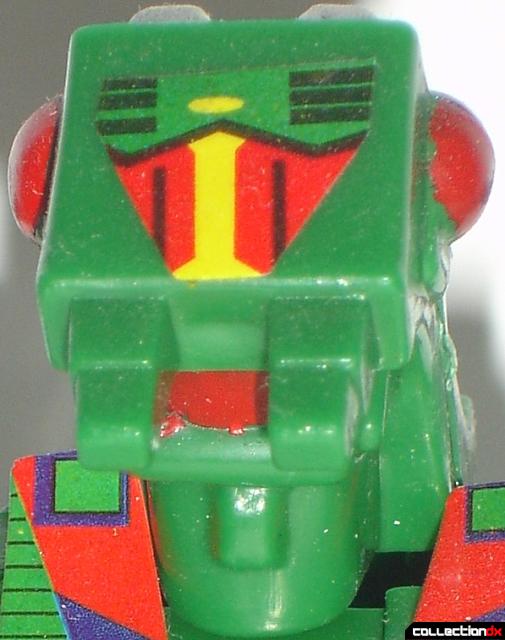 The head puzzles me a little bit but not because the insect head doubles as part of the robot head. That's been done several times before. There's a painted visor on top of what looks like an Easter Island head. Seriously, it really does look like an Easter Island head. On what I'm assuming is the neck rests a large nose and an oversized brow right above it. Setting right on top of that is the visor that I mentioned. 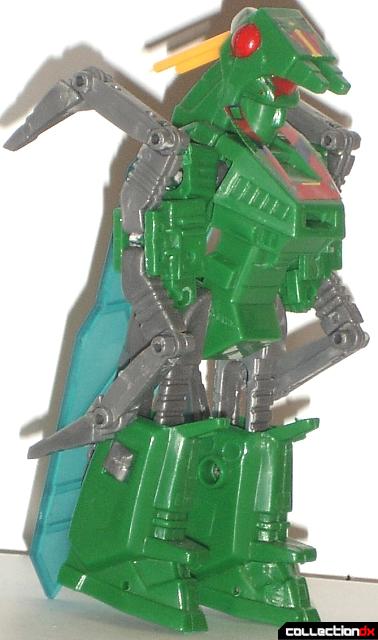 Trying not to be biased since I love the design so much, but I can only recommend him if you're going to keep him in either one mode or the other and not handle him too much because of all the loose, floppy joints. Gotta admit, he does look great on the shelf though.

oh my...this brings a lot of memory. I used to own this thing when I'm 8. He came in set with 3 others or at least mine is. There was this guy, a rhino beetle, a wasp and a dragonfly...I think there is one more but I cant remember what insect it was.

A few years ago they were sold in sets of 4 at places like Family Dollar or Big Lots. It maybe the same set that you remember. The beetle was black but for some reason the individual release was blue. To the best of my knowledge there were 8 of these guys (one of them being female, which transforms into a mosquito)

Few years ago?Haha..In my story it was almost 2 decades ago..My beetle was blue. The wasp is yellow and the dragonfly is red. Wow..there were 8?I have no idea.Seeing this guy reminds me of those bug robot. And I even remember they were illustrated to combine but there is no instruction for that and I cant see any combining configuration.

Wow, 20 years? I was no more than 5 back then. Lol. I think all the insect bots came from the same series and there are also smaller simplified versions floating around out there as well. I don't suppose you remember where you saw the illustration of their "combined" form, do you? If it was somewhere online it might have just been fanart. It's an interesting idea and it's possible they were either re-tooled or if they had accessories that helped them combine they were omitted. After some digging this is the only thing that I could find and it's definitely not the set we're talking about. http://www.he-man.org/forums/boards/showthread.php?251895-WTB-unbranded-combiner-robots-details-in-thread

Actually i do remember where i saw it..it was on the back of the box at the upper left corner.i thought they can combine which is why i bought them but its just bootleg troll lol..i dont enjoy the set as a kid..their wings are stupidly loose and would come off along with their back panel which hold the shoulders in..nope..thats not the set we're talking about.

Sounds like an idea for a major kit-bashing project with the help of some rubber bands of course! Lol. So far other than this guy, none of them have fallen apart on me yet. One or two are kinda floppy but that's it.