I'll cut right to the chase. When dealing with a glow in the dark soft vinyl toy, there's really only 3 things to be concerned with. Sculpt, paint and glow power. And while some may say 2 out of 3 ain't bad, 1 out of 3 is. And unfortunately, that's the case here. 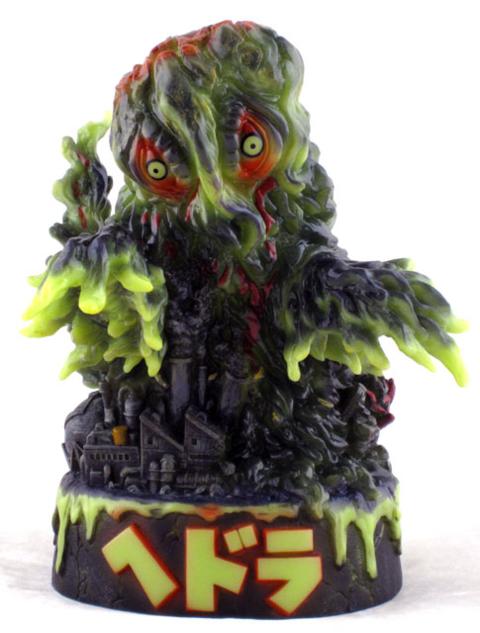 If you're a fan of Hedorah, there's a good chance you would really like the sculpt of this toy, unless you want articulation. This is simply a 7" vinyl, static posed statue, but it looks pretty nice, especially if you like the base with the name on it. 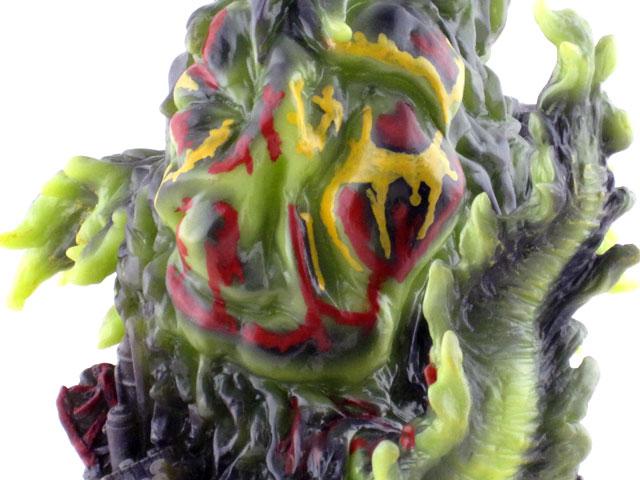 Unfortunately, the paint job on it leaves something to be desired. In some places (like the eyes and the buildings), it's pretty good, but in other spots, it's like they just stopped trying entirely. The back (pictured above) looks atrocious to me. And much like the I Was A Teenage Werewolf 12" figure from B.F.F.F. International last year, there are spots where they tried to add depth, but shouldn't have even bothered because it just looks worse than if they'd just left it alone. Which brings me to the worst part of the toy... 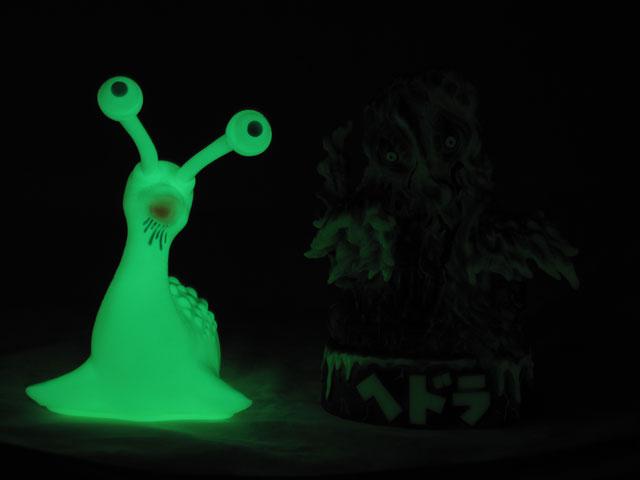 Look at that. Isn't that pathetic? The picture above shows this toy getting completely pwned by a glow Namegon from B-Club. I know that Chinese vinyl has a bad reputation in terms of glow power compared to the more superior Japanese vinyl, but c'mon! Especially when you consider the promotional photos that got me interested in this thing in the first place. I mean, there must have been some serious adjustments made to those pictures to make it look like it glows that bright. NOT EVEN CLOSE.

This was one of the more disappointing toys I've gotten in a while. Especially when you consider that it comes in an unnecessary box that serves only to increase the shipping cost. This toy retails for about $50, but with shipping it ended up being closer to $85. A good old fashioned bag and header would have been just fine, thank you. 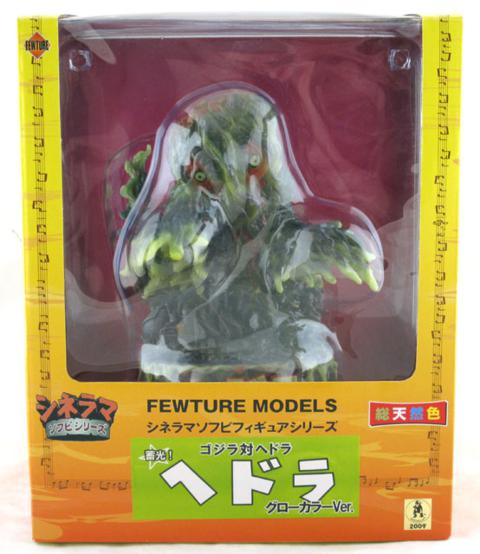 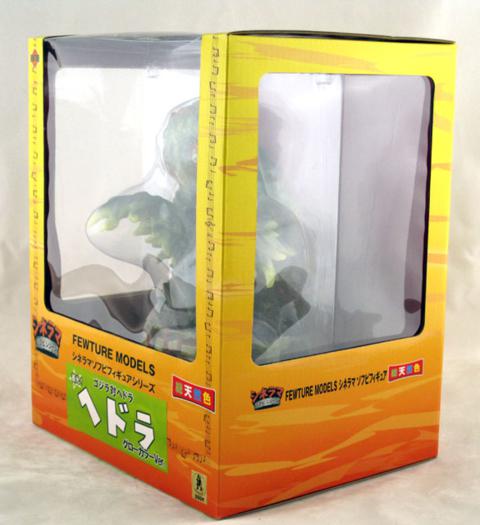 The back of the box shows some other figures from the line. I have the Mothra, which I like despite it's weak glow because it just has such an awesome sculpt, but rest assured, I will not be getting any more of these. In fact, I have every intention of selling this one before too long. Hopefully I can at least break even. 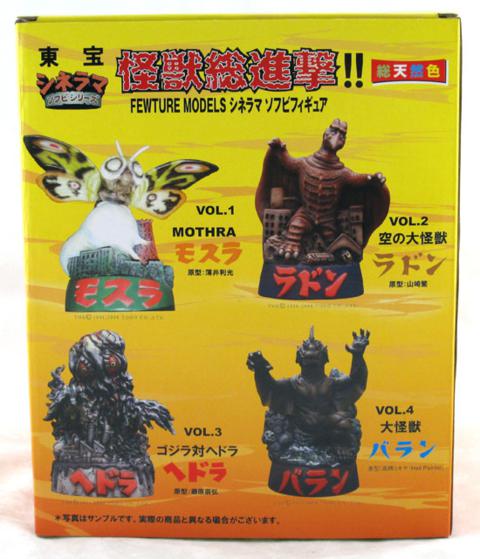 11 comments posted
What a shame

Although I'm not into vinyl I think this model is a waste of money when considering its sloppy paintjob. At ¥5,000 you can almost buy a Soul of Chogokin. What a shame. However this is not the first time Fewture disapponted me. Just look at its horrible Grendizer soft vinyl model. The High Dream 60cm offering is by far superior.

Maybe a stupid idea, but is there a way to "enhance" the glow with some aftermarket paint or coating? It seems like glow-paint can be unobtrusive enough in sunlight, although the idea of having to correct a 50 dollar vinyl is repugnant.

Not a stupid idea at all and one that Sanjeev already broached when I first got it. But I agree, I shouldn't have to and ultimately, I don't want someone seeing it in my collection and thinking "That's cool, I wanna buy one now", thinking that it's better than it really is.

I agree with Dave's three criteria for judging gid sofubi: sculpt, paint, and glow power. Thing is, I don't think this piece is that bad (I have one...but ironically, I'm looking to sell mine to make room for more glowies! :P ).

The sculpt is excellent, as Dave has pointed out. But I think it deserves more attention. Here's the deal: there are about eleventy-million Hedorah sofubi's on the market today. Why? Well, my theory is that it's the nature of the beast. It's a huge pile of sludge with groovy, vertical, bloodshot eyes. Y'know how hard it is to sculpt an amazing pile of sludge?? Not very! Sit down with some little kids and watch this movie...then give them a big honkin' slab of play-doh and have them go to town. I guarantee they'll come up with a Hedorah sculpt that'll make us fanboys swoon!

So what's the big deal with this piece? Well, this sculpt is not only great, it's unique...and that counts for a LOT with all the other Hedo toys out there! The ubiquitous drips from his "hands" really resemble outstretched fingers trying to getcha! The sculpt around the eyes/eyelids/face, the brain-bulge on top of his head, the lung/sack thing on his back, and even the tail are dead nuts. I wish Dave's pics from the front were a little brighter so you can see the detail of the smokestacks better. The industrial plant he's looming over is actually billowing smoke that sorta floats up and blends into his right shoulder. It's absolutely brilliantly executed.

These guys are DAMN talented sculptors. They basically started with a "realistic" take on Hedorah, then added enough unique flavor to rival some of the best Hedorah sculpts out there. And looking at the back of the box, that Varan looks incredible...though the Rodan looks a bit too "cute" for my liking. And their rendition of Yoshio Tsuchiya (from The Human Vapor) is simply haunting (though I can't seem to find a pic of the upcoming glowie...Dave?)

Next up--the paint. Okay: the red and yellow..."drips"?...on his back are pretty awful. But other than that, the paint really isn't that bad. I mean, from the front, he looks pretty great. And if I were going to keep mine, I'd just grab some acetone and wipe the drips off his back! Anyway, one important thing about Hedorah toys is the eyes. These eyes aren't exactly how they look in the movie, but they're killer! Totally creepy.

Lastly, glow power. Okay, if this statue (and the Mothra one, which I have as well...and am selling as well!) glowed brightly, I'd probably keep it. It doesn't. HOWEVER, either Dave got a bum piece, or he needs a lesson on charging these guys up! I have ALL my glowies under some pretty hardcore blacklighting. Blacklights do a pretty good job of making these look like the promo pics. Thing is, the glow, at its max, is still only about 2/3 as bright as Japanese glow vinyl...and the glow dies out in less than half the time. :( Maybe someday Chinese vinyl will match Japanese vinyl in terms of glow power (for glow vinyl) and glossy surface texture (for clear vinyl).

Now, there are some aftermarket products that would enhance the glow power...including some very special stuff we have under development out here! ;) I'm definitely unafraid of powering up an existing glowie...or even glowing up a completely non-glow toy! I'd probably do so for this and Mothra, but I'm just not that into the whole statue thing. Plus, I need another Hedorah like I need another hole in my head!

Anyway, your mileage may vary.

Oh, one last thing: I thought this thing retailed for only around ¥3k. Or...maybe I just got mine for that much. Either way, if you like this thing, wait for them to pop up on the after market and DON'T pay over $30-40.

No one should have to invest in blacklighting and/or extra glow paint to get a glow in the dark toy to glow.

Here is the Art Storm site, with the H-Man and other toys I will not be buying. You can see the price listed as 5,000 yen.

Oh, I agree that one shouldn't have to invest in extras to get a "glow" toy to glow! But let's face it: any self-respecting glow collector should have at least ONE cheapie blacklight somewhere in his or her collection! ;)

But for real, though, I see what you mean. You're taking a principled stand against "collectibles" like this. It's kinda like the discussions we've had before on CDX where some companies are charging absolutely ridiculous prices for supposedly high-end adult collectibles...but they end up falling absurdly short in the final analysis.

So, the argument is to stop supporting these companies by ceasing to fork over our hard-earned currency. Vote with your dollar or your yen. Maybe THEN these companies will be forced to put out quality product.

I certainly agree with this mentality for the most part. Thing is, I'm just not all that offended by the suckitude of this product as you seem to be, Dave. No big deal, obviously, but I think there's enough merit in the sculpt that if some people don't mind it, I can totally see it being worth "upgrading" with glow paint, etc...

I think the sculpt looks awesome,espescially since as you said,there's a billion Hedorah's out there. I really like the looks of the "back of the box" buddies,too. The weak glow wouldn't really bother me,since I'm not as big into glow as some people seem to be.

I do think 50 bucks plus THIRTY shipping makes it too high,though. I realise it's not really "fair" to count shipping as part of the price,but at the end of the day,he didn't pay 50,he paid 80,no matter how you look at it.

Sanjeev,I'm glad this review was posted,because I meant to tell you this and I forgot. I don't know if you're a Batman fan or not,but there's some new little SD figurines out for Batman Brave and the Bold. One of these is a set featuring Batman,Gentleman Ghost,and GG's skeleton horse. Anyway,it doesn't say this anywhere on the box,but I bought them and both Gentleman Ghost and his steed glow in the dark. It's nothing you need to drop everything and search for,but the next time you're at Target or whatever you may want to pick it up,it was only like 10 or 12 bucks. The glow's pretty good for a mass market toy.

Hey, thanks for the heads up on the Gentleman Ghost figures. I'm a minor Batman fan and have a few figs, but I'd love a glow set of Gentleman Ghost and his horse. Is this the set you're referring to? Yeah, doesn't mention glow anywhere!

Anyway, I don't suppose you want my Hedorah? I won't charge you $30 shipping! ;)

Yeah,that's the set I'm talking about,but do NOT spend 25 bucks on it! It's only like 12 bucks at Toys R Us.
My Batman's head is a little loose,but it still looks fine.

Think I'll pass on this Hedorah but thanks for the offer.

Nekrodave,that link gives me a 404.

Sorry. I had an extra / in there. It should work now.