This version of Getter Dragon is an updated version that appeared in the 1998 OVA series "Change!! Getter Robo" or "Getter Robo: Armageddon" as it is known in the west.

A lot of people, myself included, did not like Getter Robo Armageddon. I thought it was too confusing, and it was based on a continuity I was not familiar with. The opening few episodes were alright, but once the Nuclear Warheads destroyed civilization, it was all pretty much crap.

One of the redeeming aspects of the series was the opportunity to see the original Getter Robo fight against an army of mass-produced Getter Dragons. It's pretty awesome, although all of the Getter D robots get their asses handed to them. 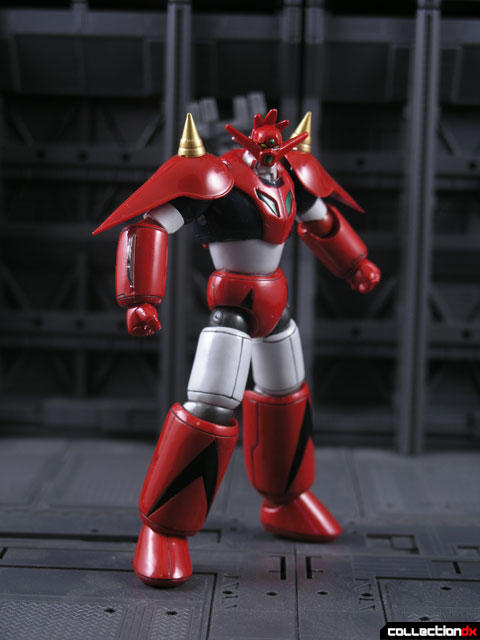 That new version of Getter Dragon is due to get a SOC version, but Kaiyodo beat Bandai to the punch by releasing this Revoltech version. 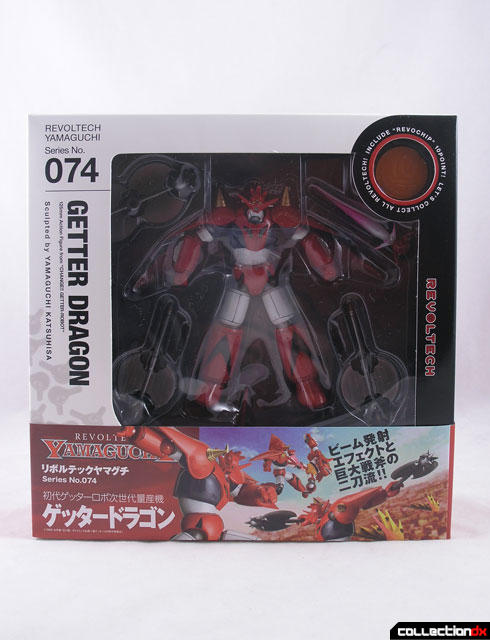 The Revoltech Getter Dragon is a cool little toy. Revoltech joints are all over the figure, making for a wide range of motion and poses. 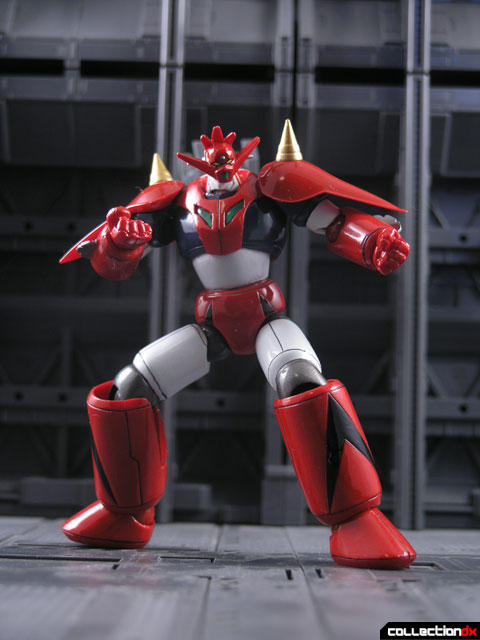 The optional hands include two axe-holding hands and two open hands. The open hands have a hinge in the wrist for added articulation. 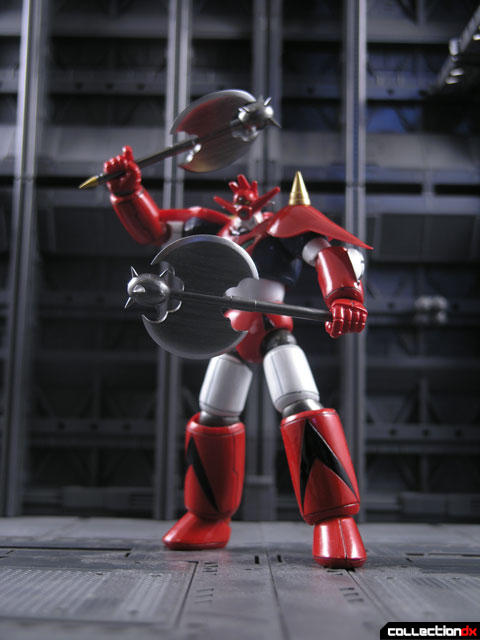 The Getter Tomahawks are large and sharp. You can hold one in each hand. 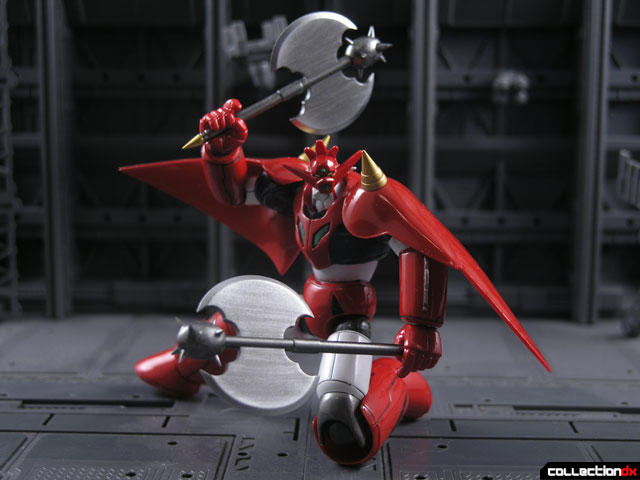 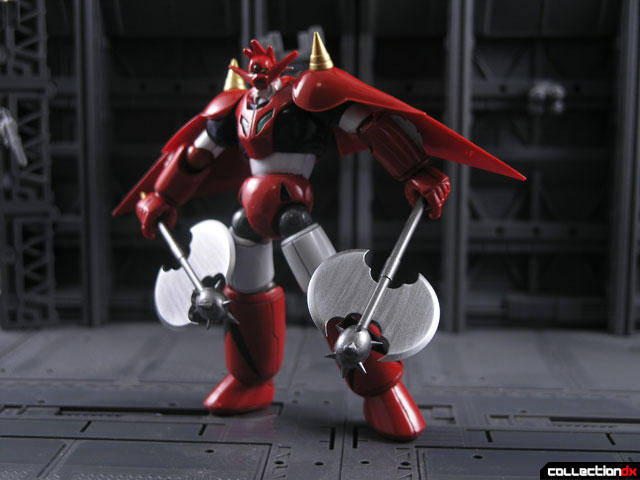 To replicate the boomerang attack, Kaiyodo included a dual Getter Tomahawk that can be attached to the stand and be spun manually for visual effect. 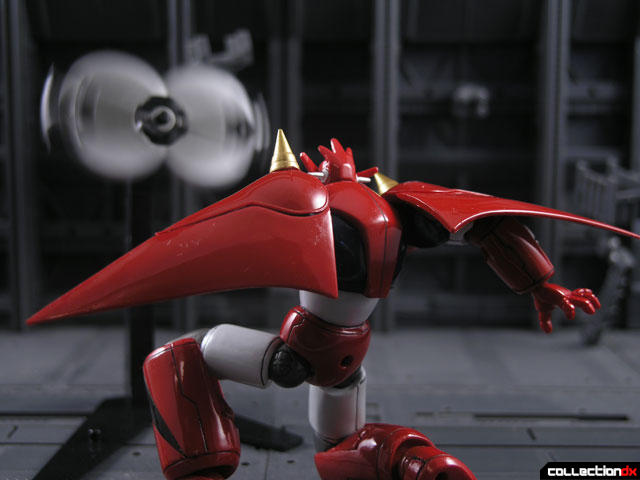 The large Mach Wings attach to the back of the shoulders by simple pegs and are not articulated. 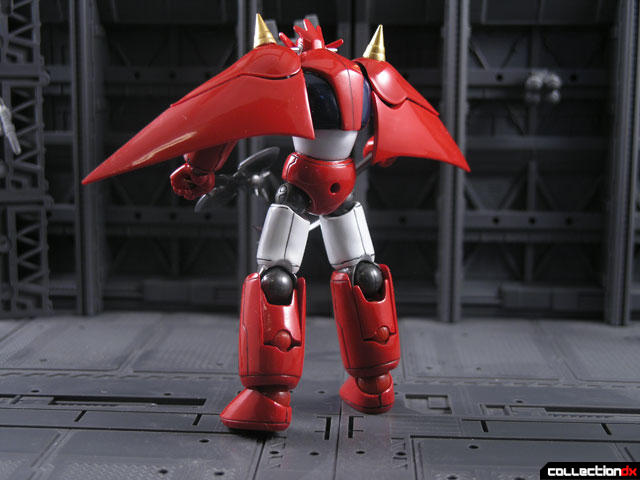 An alternate head is included that has an attached Getter Beam ray. It's a nice effect, and having it permanently attached to the head keeps from having small peg breakage. For added effect, a small "beam effect" part is included that replicates the effect of the beam on the landscape. 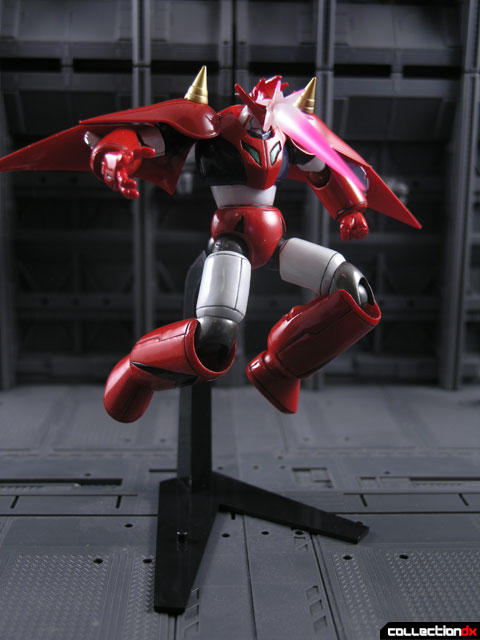 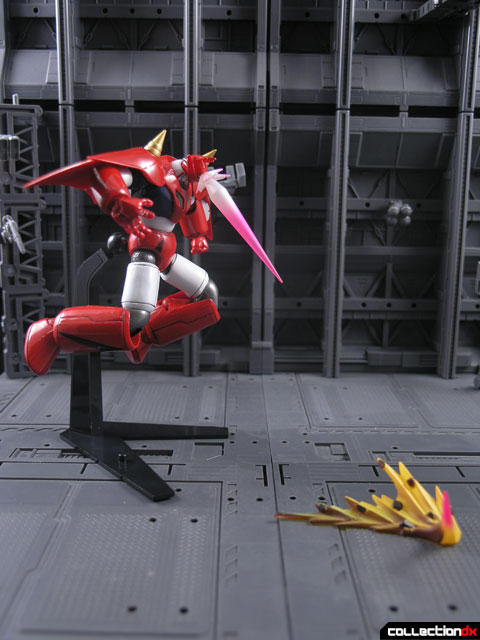 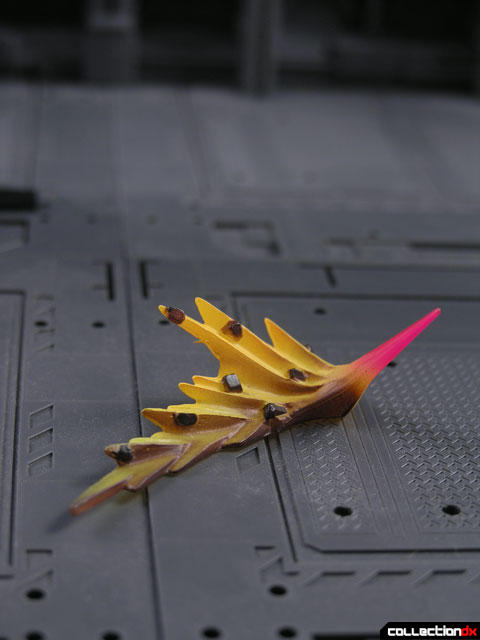 Finally, your standard Revoltech stand is included, as well as a Revoltech coin and box. 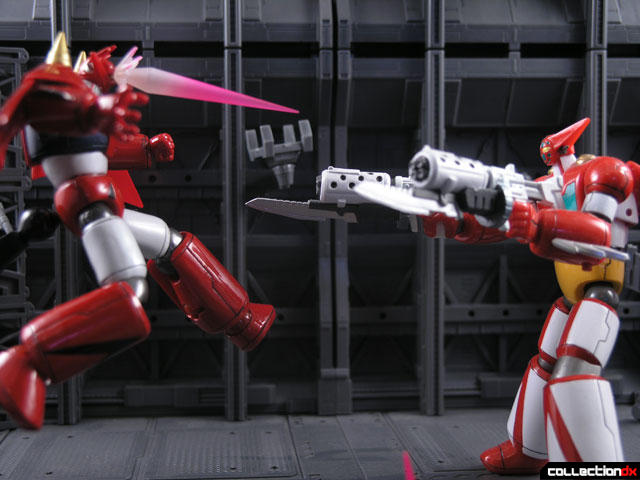 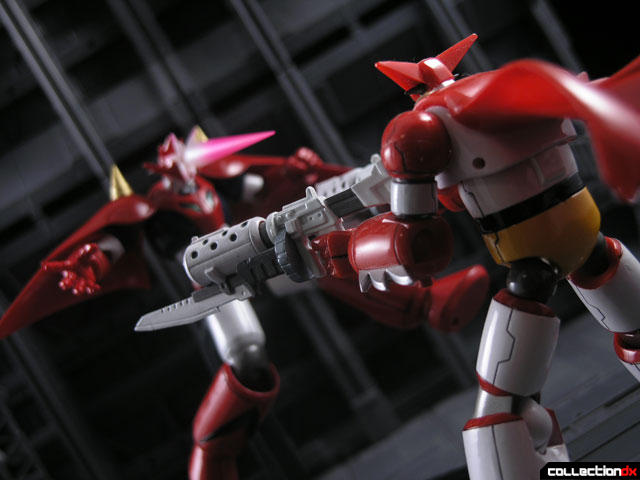 Getter Dragon looks great, and is worth getting. Get yours at HobbyLink Japan.

12 comments posted
You sure your "beam effect"

You sure your "beam effect" isn't backwards? It looks like it should go the other way.

I wonder why they didn't make a Revoltech of the Getter Robo G version? It's just so stupid to me,it should be a no-brainer. Should we make a figure of a classic,nolstalgic design,or make a figure from a piece of s--t OVA everyone hates?

I like this design a lot, i felt that the older getters got the cutesy thing going and the shin getter redesigns gave it the much needed lift, am waiting for them to release a revoltech sentai toy though dabouken, dekaranger robo and bio robo come to mind, and turbo robo as well... but then again i'm just dreaming...

I don't think everyone hates that OVA. It certainly appears in enough crossover games. Also the design of this Dragon toy is kind of split between the manga and OVA design. This one has the Mach Wings that are made out of extended shoulder bits like in the manga. In the OVA Dragon has a full cape.

Also the black version comes with the big beam cannon from the manga.

Another piece of trivia, the Getter Robo G vs. Shin Getter fight is based almost shot for shot off of this one-shot manga where some dinosaurs steal G and the team has to defeat it using the original Getter.

After watching some Force Five this summer, I've been looking forward to this one. Hoping all the Force Five mechs get Revoltech releases, but that's probably a pipe dream. For a budget minded collector like myself, this line is great. Love my Revoltech Gaiking!

Regardless of the story line, I thought the animation in this series was very nice. The battle scenes looked superb. It is true however that these "remote" versions got the beatdown bigtime, but that is the difference between 3 pilots -vs- drone robos.

The more of these I see, the better they look. I think the playability surpasses the S.O.C. line a little. Keep the S.O.C. packaged and play with the Revoltech!

Without doubt the original Getter Robo and Getter Robo G anime TV series were and still are one of the best anime created by Go Nagai.
Being a fan of the classic series I was keen to see the OVA and to be honest I felt somewhat disappointed especially upon seeing mass produced Getter Dragons - hundreds of them, thousands of them!!!!
However, from a collector's point of view I must admit that this Revoltech Shin Getter Dragon really is awesome due to its articulations and accessories. The Getter Beam head and the spinning Dual Getter Tomahawks are what will, most probably, convince me to buy this gem of a toy. I have already pre-ordered my S.O.C. version from HobbyLink Japan. This Getter Dragon is so damn cool.

I think the point being made was that grendizer1975 called THIS figure "Shin Getter Dragon", which is incorrect. This is just Armageddon's version of Getter Dragon. It's also worth noting that this is the TRUE Getter Dragon model (which appeared in crazy numbers in the first episode of the series) and not the "fake" Metal Beast Getter Dragon that was piloted by Saotome towards the end of the series.

It's worth noting that the reason Armageddon was so confusing from episode 4 and onwards was due to a major staff change that replaced then-director Yasuhiro Imagawa (who has headed other great mecha anime such as Giant Robo, the 2004 Tetsujin-28, and most recently, Shin Mazinger). When Imagawa left, he took all his story notes with him, so the staff who replaced him had to wing it with absolutely no clue what had been planned down the line. Since then, he's never revealed what he originally had in store, which makes me sad. I would've loved to know how Armageddon was "supposed" to be. I have a feeling it would've turned out totally, completely different.

That said, I still have a fondness for the series, and while Revoltechs aren't my thing, I'm glad to see these new OVAs given some attention in figure form.

Getter Robo armageddon is awesome for the animation and soundtrack alone.
The plot is kinda messy due to the staff having no clue where to go but I thought the end result was pretty good all things considered.

Great looking figure I'll definitley be adding this one to my collection.
Now if only they'd release more Revoltech Mazingers.