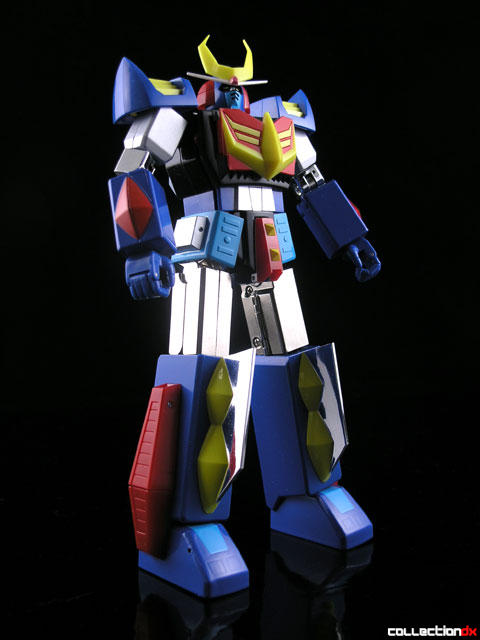 I've had a lot of time to sit and absorb Baldios. He is an interesting toy that I think had the misfortune of being released at an unfortunate time. But I do like it, although I think I was a little off put about it at first. 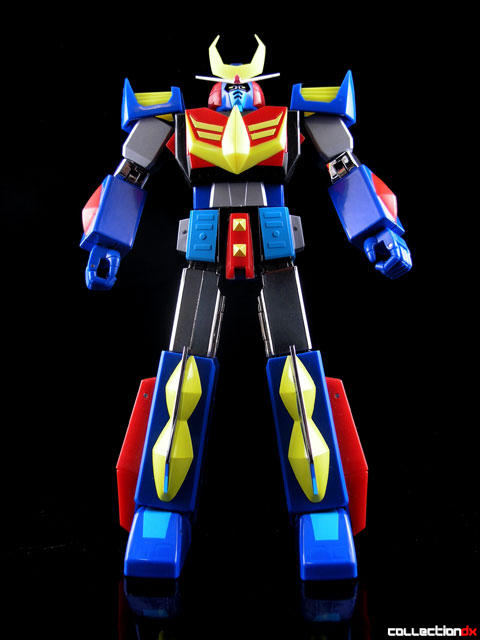 There are two versions of this Baldios toy released. This version is the limited anime color version, limited to 500 pieces. The regular version is the same mold with the same accessories, Just a different color scheme. 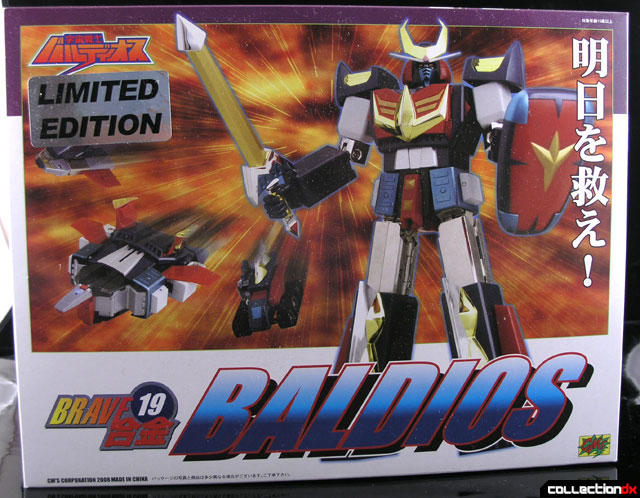 The box is great - glossy cardboard with a full, old-school styrofoam tray. Included is a glossy fold-out manual and a sprue of plug hole covers should you decide to put them on. 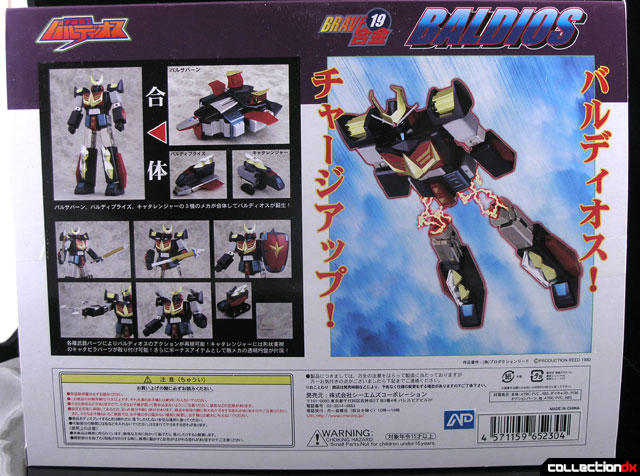 Baldios is 19th in CM's Corporations Brave Gokin line, at after a lot of gokin-less releases, I am proud to say the gokin has returned. Baldios is significantly loaded with metal. The whole chest, most of the arms, upper legs and feet are metal. 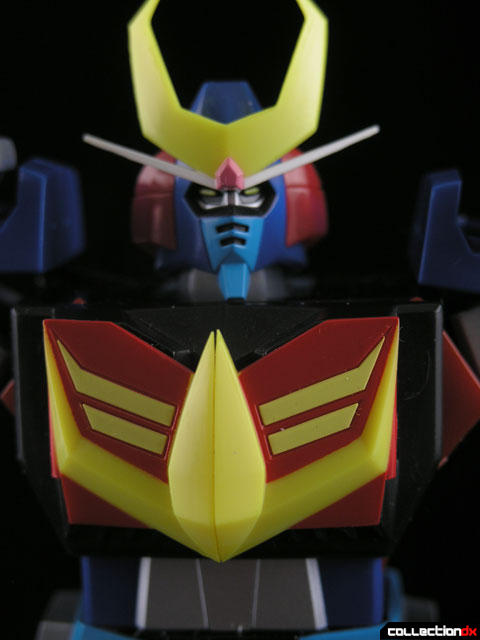 Baldios is a combining robot. The three individual components are called the Pulsarburn, Baldiprise, and Cutteranger. 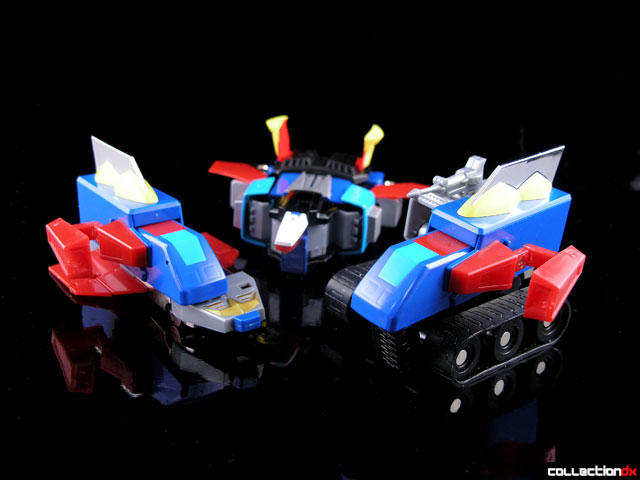 The Pulsarburn forms the torso, while the Baldiprise is the right leg, and the Cutteranger is the left leg.

In combined robot mode, Baldios stands about as tall as the other Brave Gokins, standing just a little taller than Goshogun. 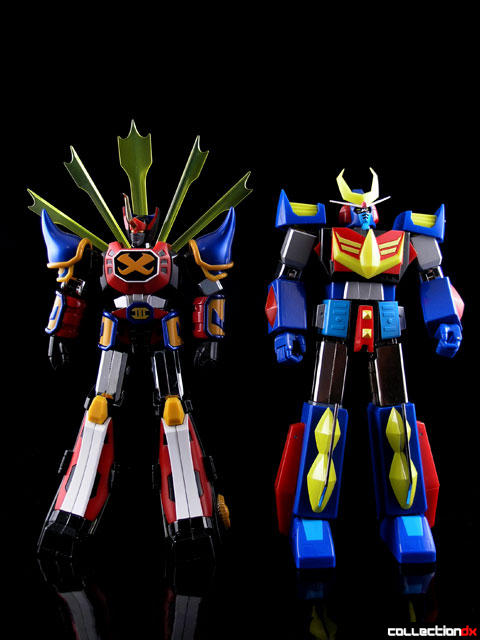 The head is all plastic but has a full range of motion. The shoulder pads are connected to the back with diecast rods. Each shoulder pad can be swapped out with poseable cannons. 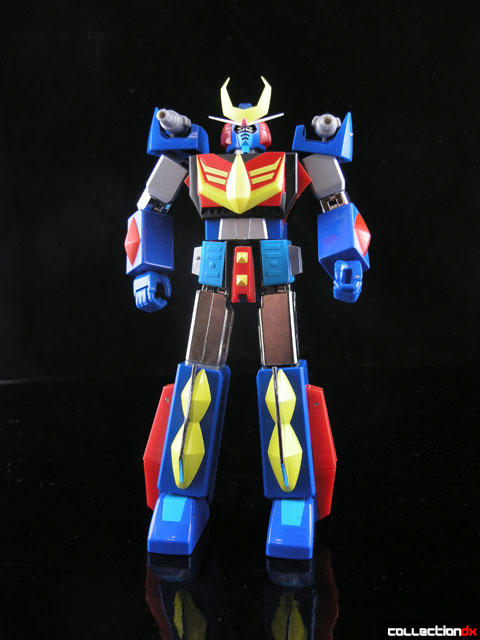 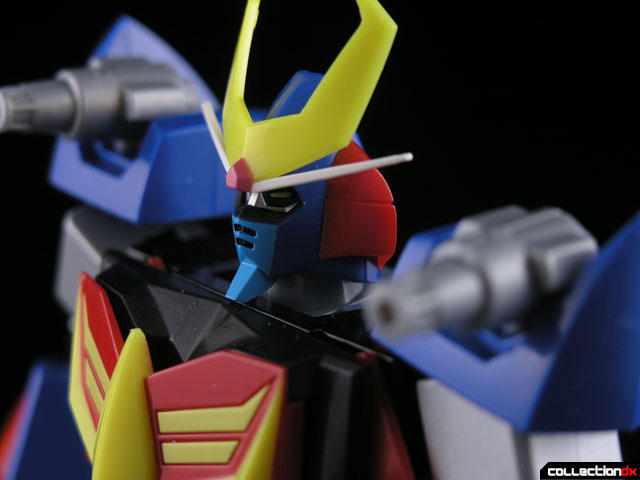 The arms have a full range of motion, with clicky shoulder joints and diecast throughout. The lower arms have an opening compartment for storing the hands in robot mode. There are only one set of hands - no swapping. The hands feature articulated trigger fingers. 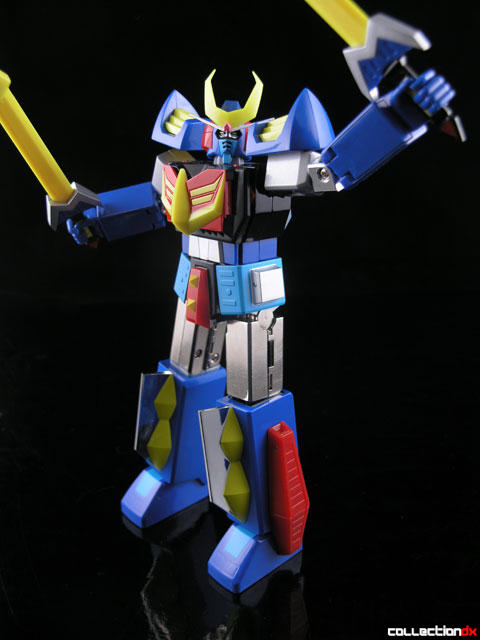 There is no waist joint. Kind of unfortunate, but with the transformation mechanism it can't be helped.

The legs attach at the waist with a rather flimsy connection method, which can really be shown best on video. I understand WHY they are this way, but I felt it could have been done better.

The upper legs are diecast metal, and have a joint right at the top that allows forward and backward motion. Unfortunately, the legs do not allow for any kind of swivel motion. 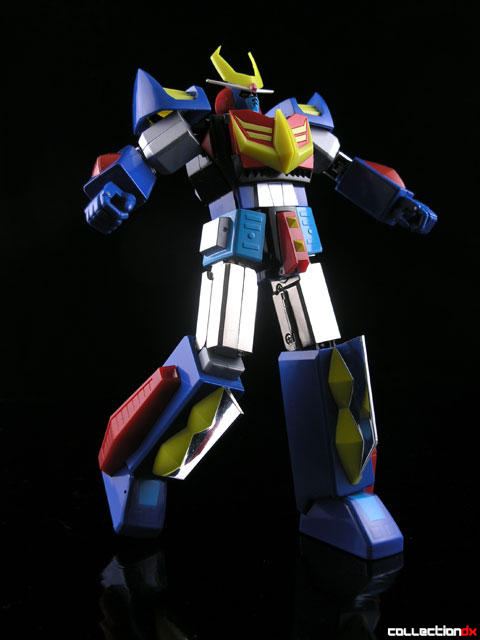 Are you sensing a theme here? See, Baldios is really limited by its transformation mechanism, but what's great is that its an anime-accurate PERFECT transformation.

The engineering on Baldios is outstanding, and you really have to give kudos to whoever worked on this thing. Baldios is known for its really odd transformation, and CM's pulled it off in a way that only the Japanese can. Must be all that origami. 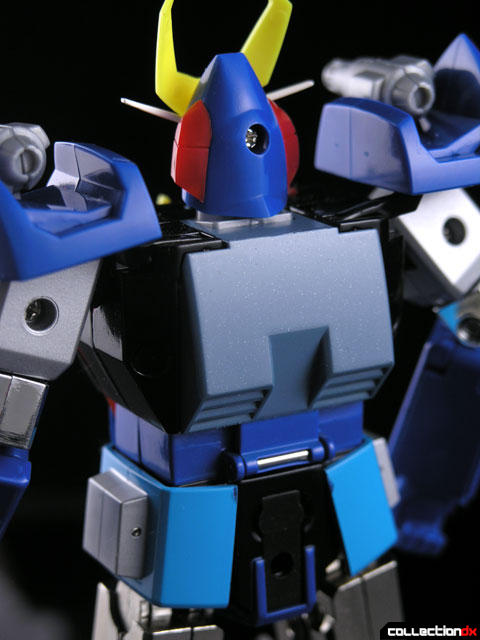 The transformation sequence is covered in the video, but I really can't stress how surprisingly cool it is. You just don't think it can possibly do what it does, yet it does. Its a marvel of toy engineering.

There are a few accessories included with Baldios including the Baldiguard shield: 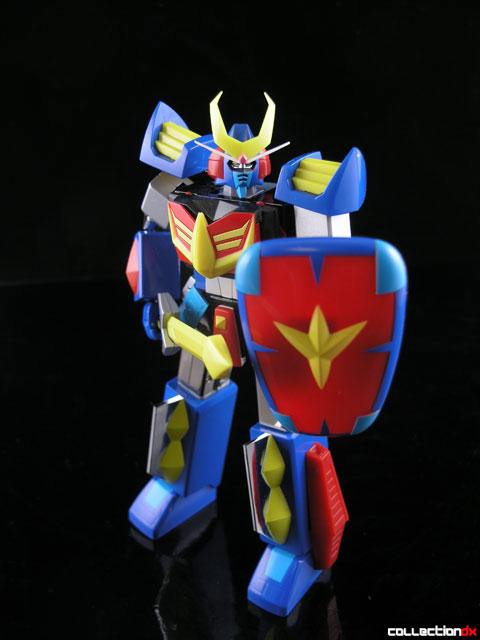 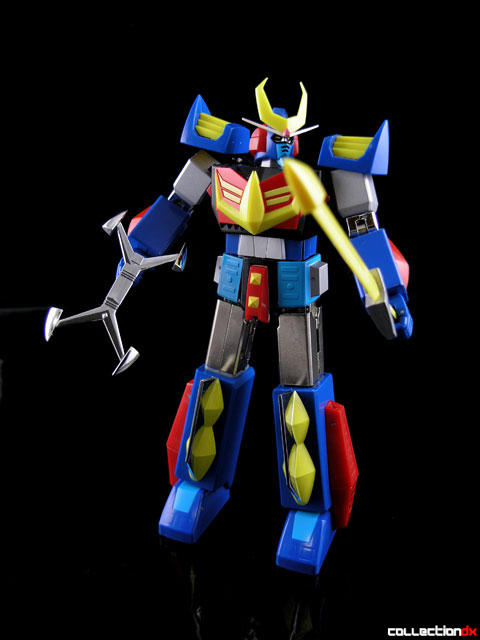 Two Pulsabers that come with two Pulsaber extension parts that enable you to extend the weapon in various combinations. 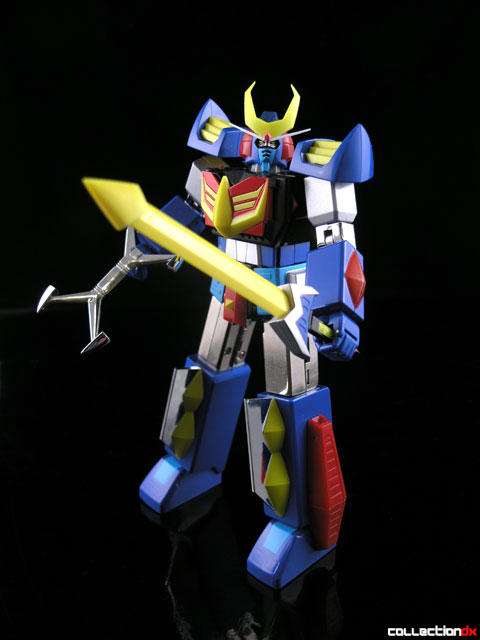 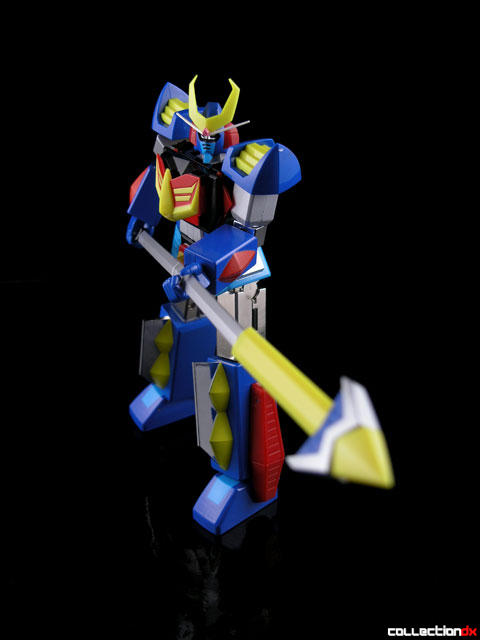 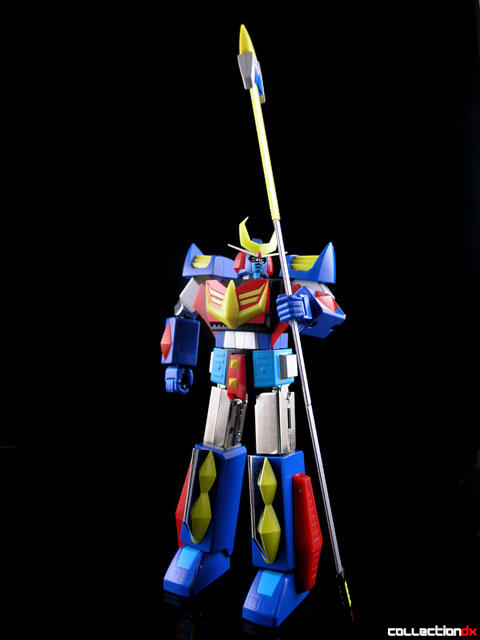 Also included is a small enemy ship! I can't say Baldios has much to fear from this guy. 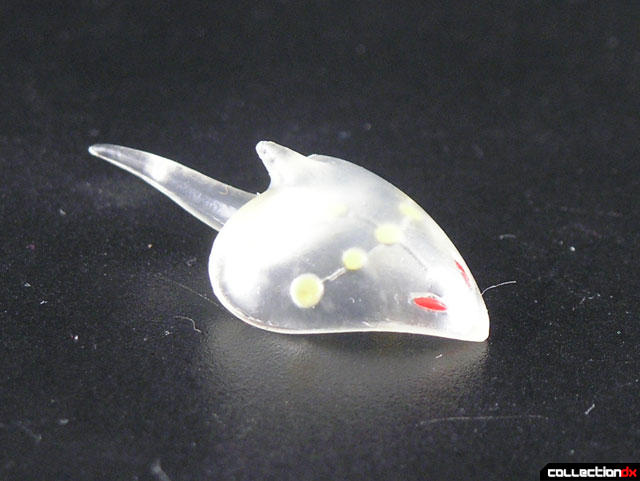 The Pulsarburn ship looks fine, and has the nice touch of some pull-down landing gear. It would have been nice if the wings had something to lock into as they just kind of sit there and are easily bumped out of position. Also be on the look-out for a small piece inside the chest plate that can easily become dislodged during transformation. (again, watch the video). 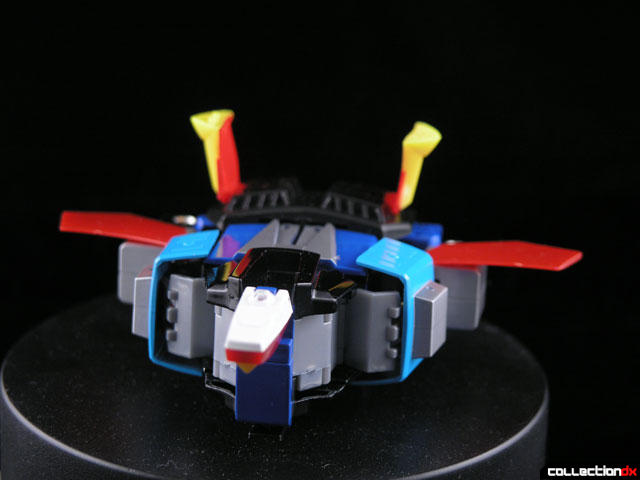 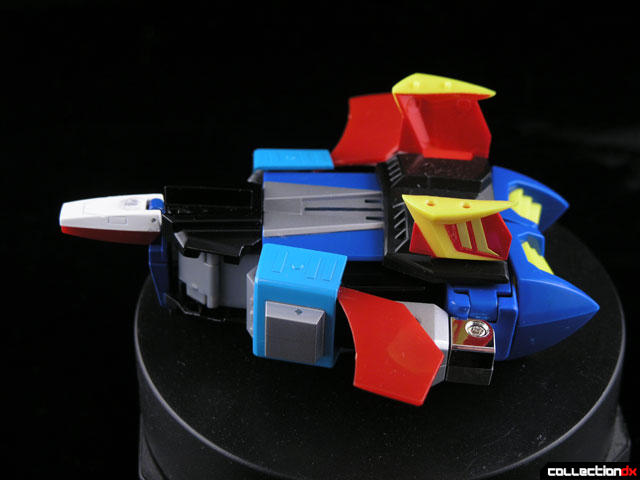 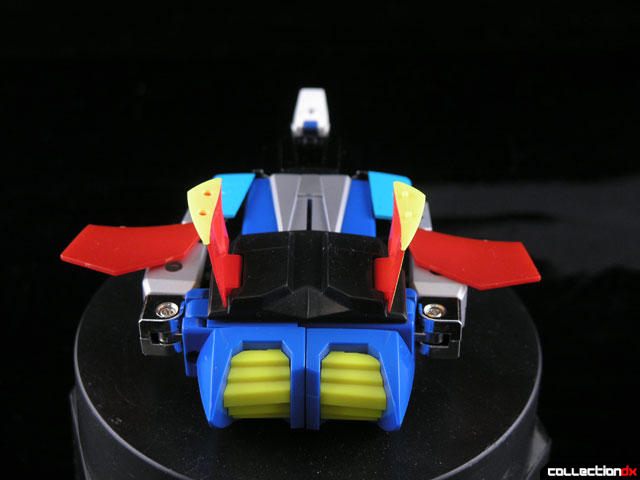 Baldiprise is the right leg, and is another flying ship. The wings fold out rather intricately from the inner mechanism, and the way they stash the cockpit inside the foot is really great. 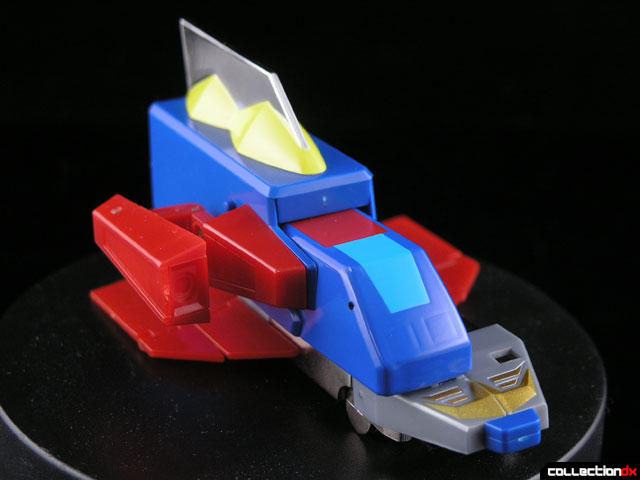 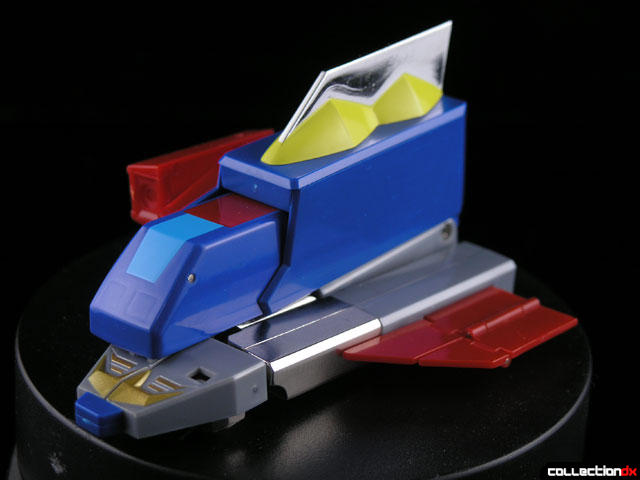 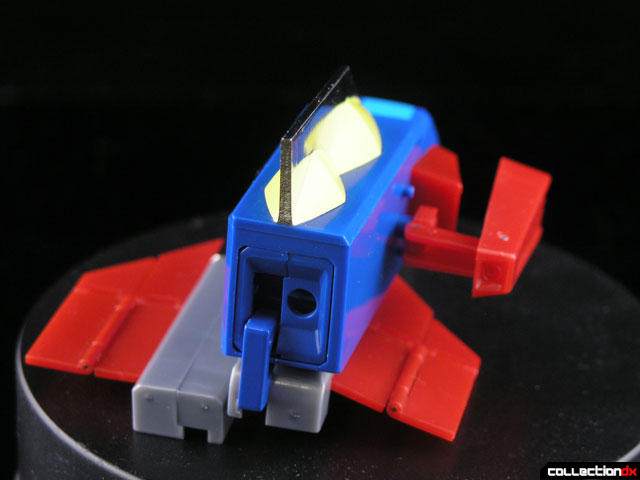 Cutteranger is the left leg, and is the mandatory tank vehicle that is prevalent of all great anime of the time (Voltes, Combattler, Ideon etc...) This one features a cool hidden gun that is articulated, and also includes a second more anime accurate set of tank treads that are real rubber and really turn. I still say its a perfect transformation because there is a smaller set of tank treads that do come out as part of the transformation. 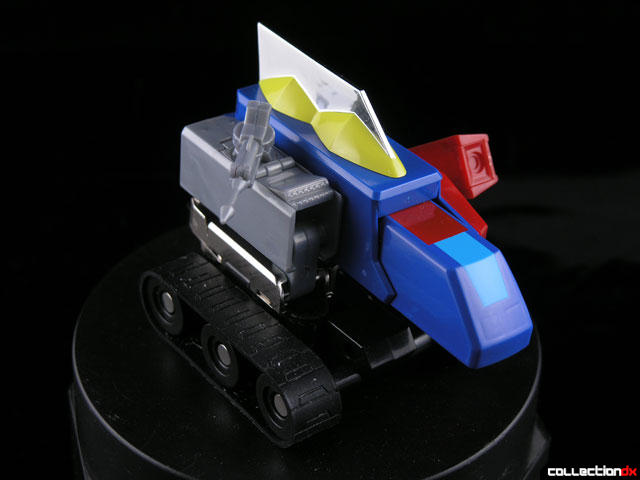 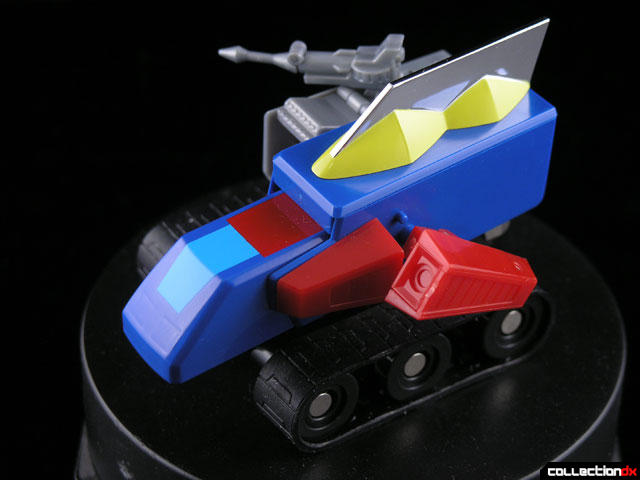 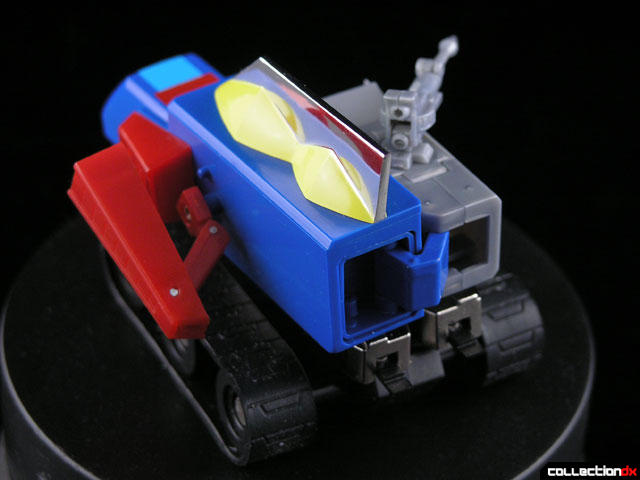 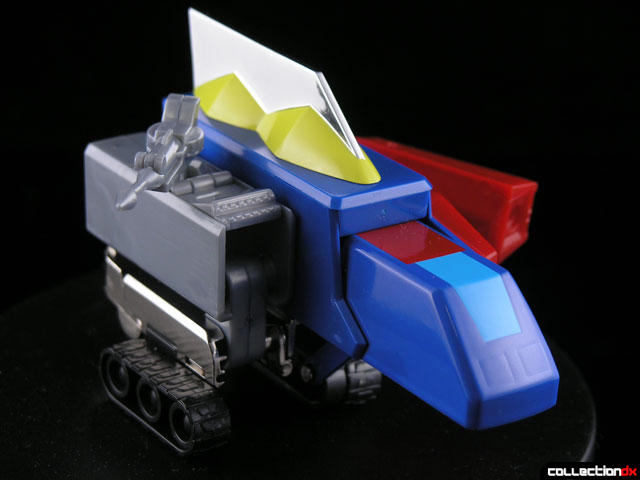 At first I was a little let down with this toy, as the waist connection and lack of articulation were really missed. But once you get into transforming it, the true joy of this toy comes to light. The transformation is so nicely executed.

Unfortunately, the only downside to this toy is the price. At 21,00 yen, it's not cheap, almost double what Goshogun cost, not but a year ago. In my opinion, the rise in cost has to do with the increased cost of materials, increased engineering and tooling costs, and lower production numbers. It's a neat toy, but you have to really want it to pay that kind of money for it. Had it been released in different economic times, I think more people would take a chance at it.

And if you have the money to spare, by all means, go for it. It's very cool. But budget-conscious shoppers will likely find the price a big turn off, unless you are a huge Baldios fan.

Baldios is available at Anime-Export.com 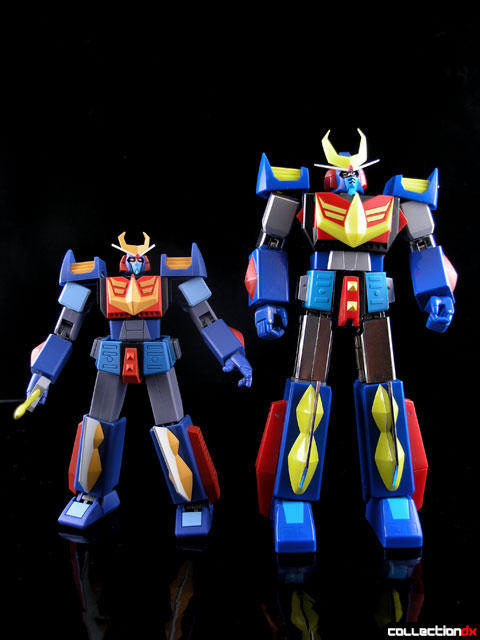 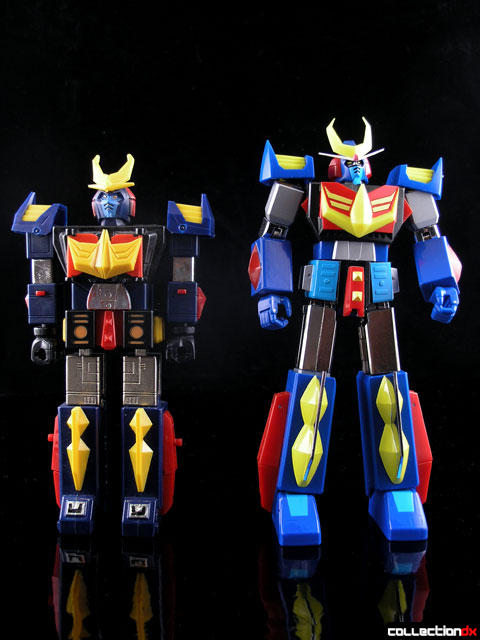 will you review/have Brave Gohkin 17 Gakeen, you have a page about it release but no review yet.

That and Danguard Ace reviews would be great

"Must be all that origami"...classic!

I was lucky enough to watch Baldios on TV back in the 80's (when it was released) and a few weeks ago when it was released on DVD together with the movie. Obviously in Italian, one of the two languages which are PERFECT for anime dubbing (the other being English/American).

Baldios is most probably the only robot anime loved by females because it is a combination of shonen-shojo manga. You have battles, big robots, politics, sci-fi, hatred, jealousy, a love story, and of course a puzzling ending.

Now to the diecast itself. The CM's offering is very much welcome by fans like me especially when one keeps in mind that I have been waiting for Baldios for over 30 years. The last Baldios was the Nomura offering. O.K. I know that Yamato has issued its GN-U Dou Baldios but that is a plastic action model (yes I have it too).

The CM's Baldios is near perfect and if it wasn't for the fact that the Government of Malta ripped me off 67 Euros VAT (since unfortunately we have joined the EU), I would have bought the Unlimited Edition too.

My grumbles are the following:

1. The tip of the sword is just yellow plastic (unlike the unlimited version which is chrome and so more anime accurate),
2. The Pulsarburn cockpit canopy should be clear orange and not just clear (Limited Edition) or clear blue (Unlimited Edition).
3. I have never seen Baldios use the laser bowgun in both the anime TV series and the Movie,
4. The Cutteranger cannon and missile rack could have easily been painted. They are just grey plastic and to a perfectionist like me that is a dent in CM's reputation.
5. A pair or two of extra hands would have been really welcome.
6. The poseable cannons could have been done better.
7. The Baldiguard shield is never used in the anime.
8. As regards the small amoeba-like enemy ship, please do not underestimate these little bastards as they can team up in a variety of combinations and voila' you have an enormous kikaiju.

All in all a very great diecast which I consider a jewel in my collection.

"Must be all that origami"...classic!

I fully agree with Sanjeev. LOL.

Josh if you've got fat fingers use a pointless toothpick to open/take out parts.

That is the method I always use even if I have skinny fingers.

I consider my diecasts as superior to gold ingots.

Good Lord. When I saw his leg transformation, my jaw fell down and still won't go back. Simply amazing, although a bit pricy :)

Bob Ross and Gokin...you know this might not be a bad idea.

I've had my eye on this toy since it was announced, but I wouldn't buy it without first reading CDX's review. :)

It sounds excellent to me. This is a sure buy, as soon as I recover (financially) from this years Christmas shopping, my car repairs, and tuition. So for Christmas two years from now I'm definitely getting this!