Revoltech Dix-Deuf is the 30th release in the Revoltech line. How time flies. It feels like just yesterday that I got a sneak peek of these at toy fair but was not allowed to take photos. Now we get up to three Revoltech releases each month! How great is that? 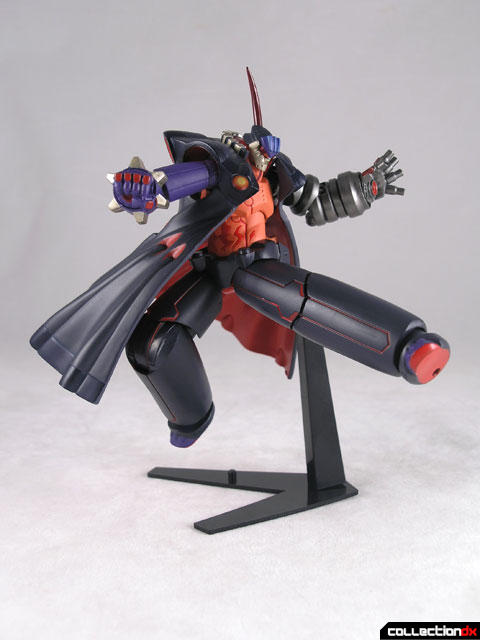 Dix-Neuf (ディスヌフ) comes from the anime Diebuster (aka Aim For the Top 2! トップをねらえ２！), the sort-of-sequel to Gunbuster. Although I’ve never seen the series, I really love the mech design. In Diebuster, there are seventy buster machines, but Dix-Neuf is the oldest. He is Buster Machine 19 (Dix-Neuf is French for nineteen and is pronounced “Disu-nufu”). Nix-Neuf is a sentient battle machine whose power is increased dramatically when he is piloted by Lal'C Melk Mark.

This toy is different for a Revoltech. It features a very unique styling, and some interesting choices for the jointwork 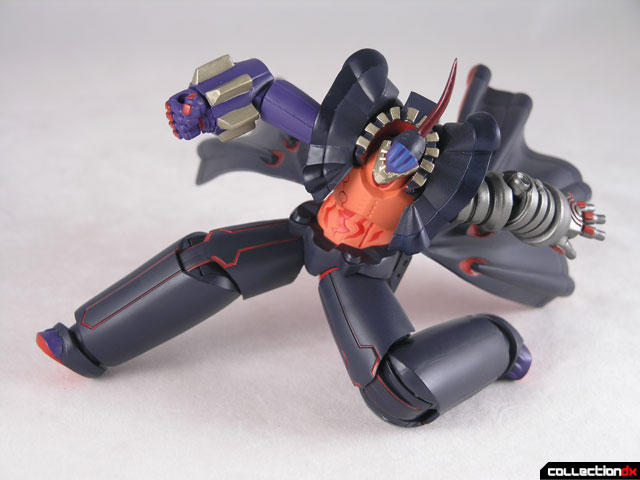 The most obvious and innovative thing here is the knee joints. In order to maintain the smooth look of the anime, Kaiyodo had to forsake the usual Revoltech joint and improvise. In this case, they used a thick ratcheted joint that more or less makes the leg look seamless. This joint is exceedingly tight. In fact, you need to have a hand on the waist and leg to bend them, else you will pull the leg right out of the socket. 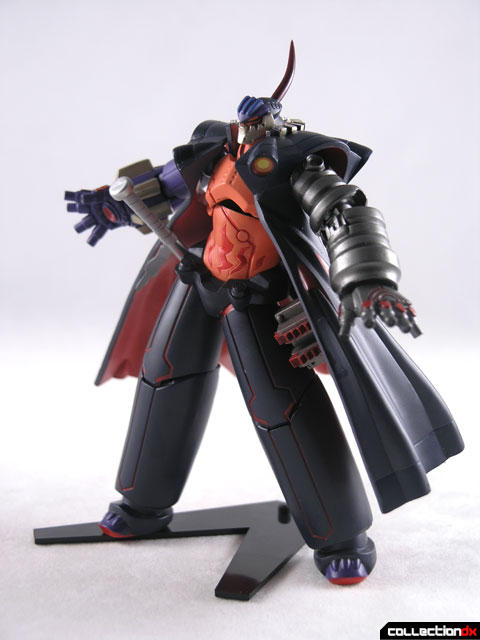 In Dix-Neuf's basic mode, he has his normal head and a large overcoat. The overcoat is made out of rubber and is secured to the back by 2 Revoltech joints. On the inside of the overcoat are places to store two of the machines's weapons. At the tail end of the jackets are small rockets - a nice detail. 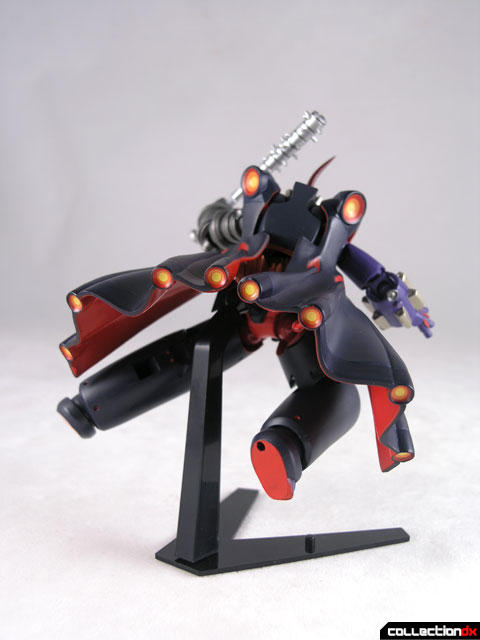 A variant set of hands is included in addition to the hands on the figure. Dix-Neuf come with two weapons - The Buster Gator (a spiked weapon that fits over the fist) and Buster Crusher (a giant spiked bat - an obvious homage to the original Gunbuster). The bat separates into two parts so it can be held by hand. Both weapons can be stored inside of the overcoat. 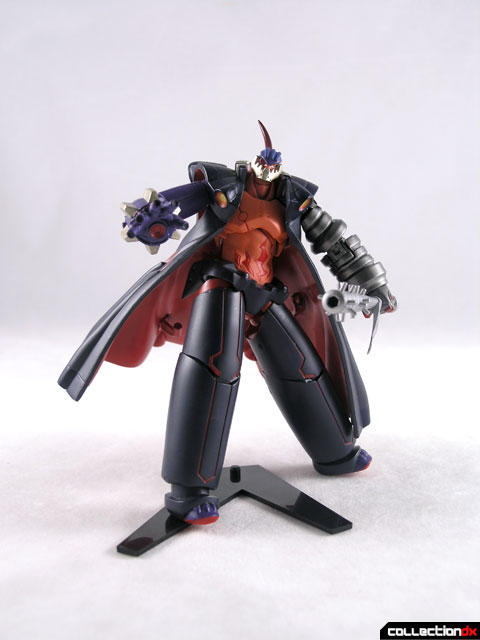 Dix-Neuf has a true form, which is revealed with it's alternate head. The faceplate is cracked, revealing a human-like face beneath the armor. His overcoat is transformed into energy, revealing a giant metallic Oni face on his back. To replicate this change with the revoltech figure, first you need to remove both arms, then remove the jacket assembly. You then attach the giant Oni face and then re-attach the arms. The effect of the bronze face on the back is quite striking. 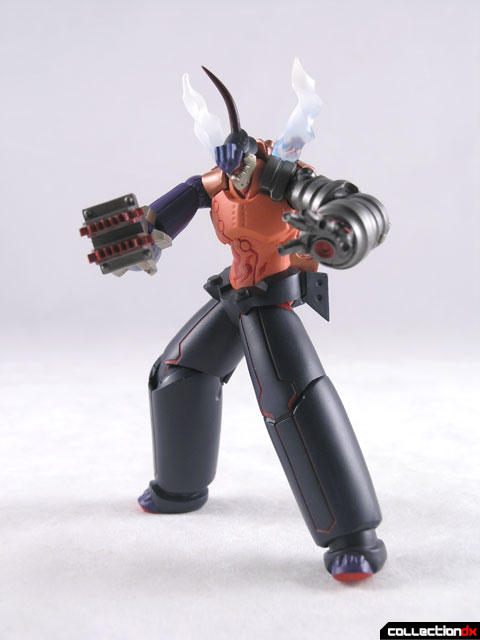 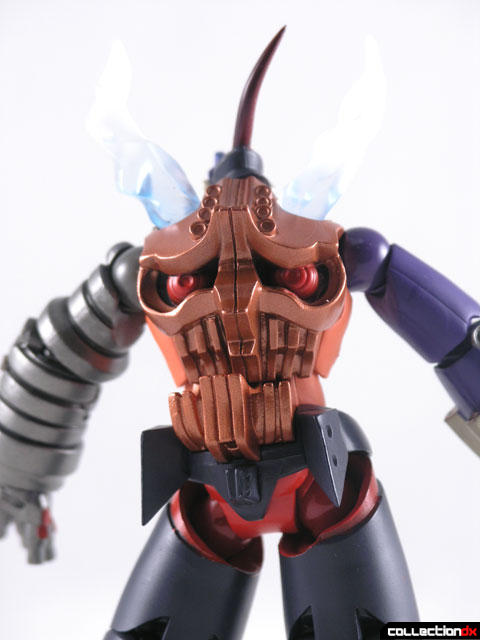 Like all Revoltech figures, Dix-Neuf comes with a stand. In the past, each Revoltech stand was marked with the name and number of that particular figure. Kaiyodo now has a generic stand with a set amount of parts that they include with each figure. This includes the V shaped base, small connector, long connector, and Revoltech joint. 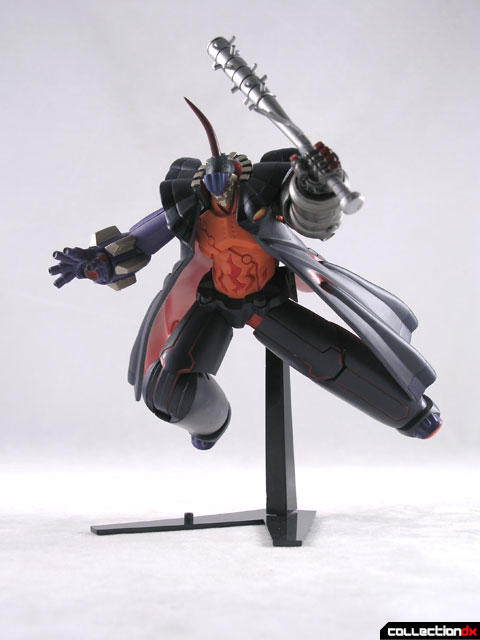 So do I recomend it? Hell yeah. this is a fantastic design, and I love the fact that they made it into toy form (previously you could only get Dix-Neuf as a fixed pose statue). 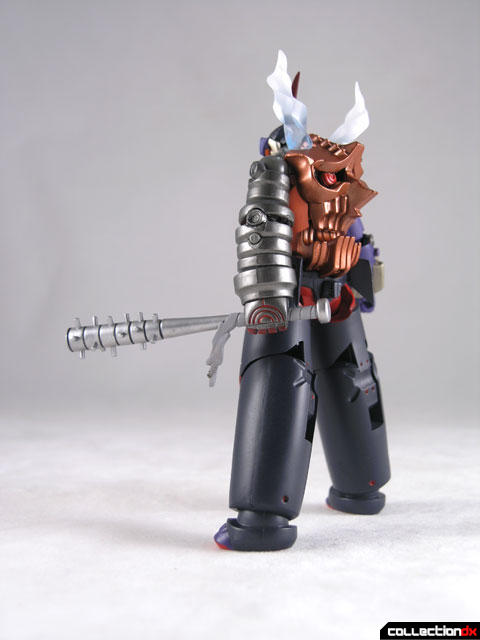 I've never seen the anime, but purely on the looks of this toy, I'm considering getting it. His back really looks amazing with the Oni face on its back, the boosters on the jacket really make it as well.