The announcement that Gamera was going to be added to Bandai's series of Chogokin toys was met with great initial excitemtent. However this quickly turned to disappointment when people saw the new design of the kinder, gentler Gamera from the latest movie entry, "Gamera The Brave" (aka "Gamera: Chiisaki yusha-tachi" aka "小さき勇者たち～ガメラ"). Gone is the ferocious appearance we've grown accustomed to in the last three Gamera films, replaced by a cutesy, almost comical looking kaiju. 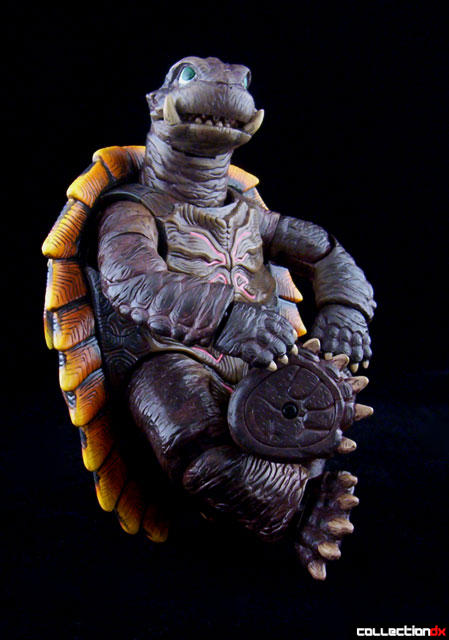 Initial reports of the toy were also rather unflattering, but now that I've held it in my own hands, I think this had more to do with not liking the new design than not liking the toy. I nearly let the bad word of mouth stop me from buying this one, but I'm glad I didn't. I think it's a really neat toy.

It comes in a typical Chogokin box, roughly 10"x10", with a styrofoam tray inside to hold all the parts. Gameras body and shell are one piece, but the head, tail and limbs all need to be attached. 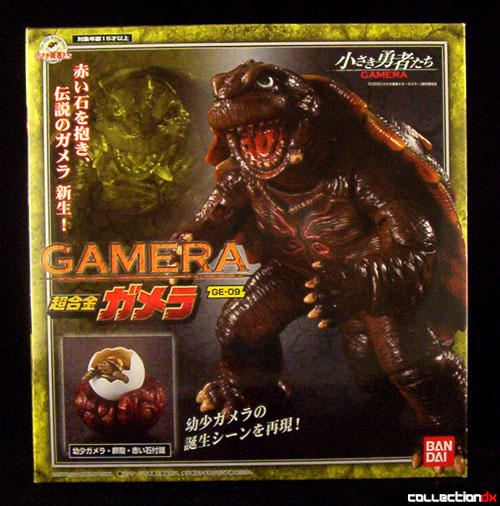 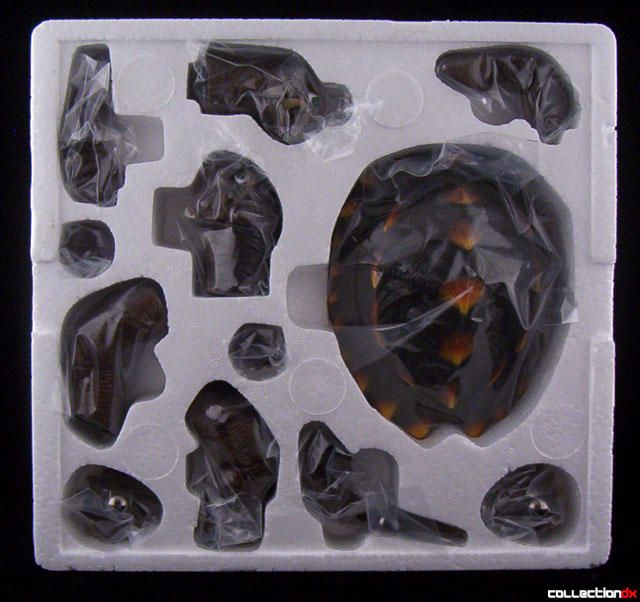 For accessories, Gamera comes with 3 heads, 2 tails, two sets of limbs and an extra fist that has a hole in it. I think this is just a "battle damaged" hand, but I haven't seen the new movie yet so I don't know if there is any further significance to it. Other accessories include a baby Gamera, an egg from which it hatches and a small nest to rest it in. The egg has three pieces. First there is a solid bottom, then a solid top, which can be replaced with a cracked top that you can display with the baby Gamera hatching out of it. 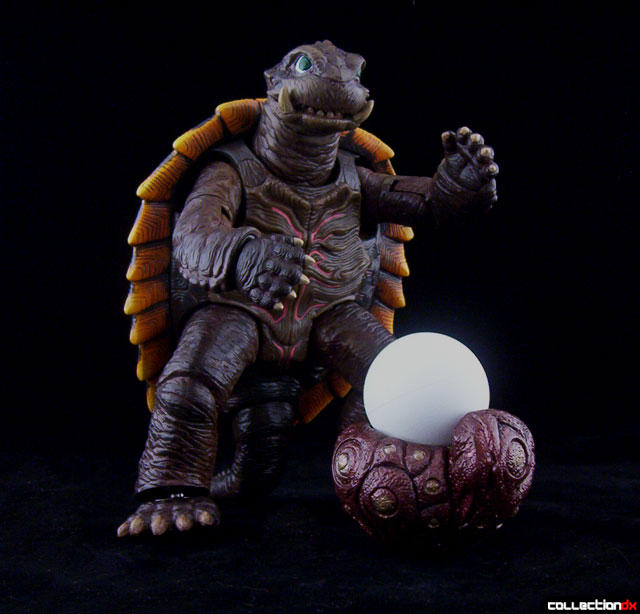 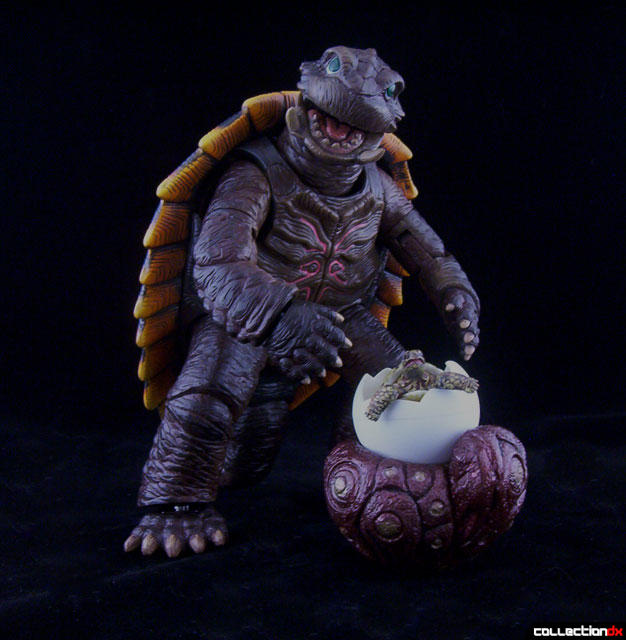 The nest has a rounded bottom and will tend to fall over, but Bandai included a small rubber ring that you can place under if for added stability. Unfortunately, it is not attached so be careful that you don't lose it. Otherwise the nest/egg/baby Gamera will be a bit more difficult to display.

The extra limbs that come with Gamera can be used to represent him in a crawling mode. This is an interesting change of pace, but I still prefer the old school flying style. I would hope that Gamera still flies in the new movie, and if so, it would have been nice to get the relevant parts to depict this. 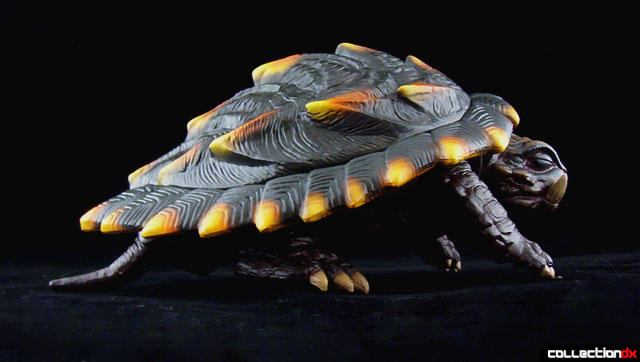 As you can see, one of the heads on the toy is horizontal for the crawling mode. The other two are different mostly because one has the mouth open wider and molded into place, whereas the other has a jointed jaw so you can open or close the mouth.

Not including the opening mouth, there are 17 points of articulation, including a subtle one in the neck that allows you to slightly maneuver the head up and down. There isn't a wide range of motion, but it is there. The ankles are on ball joints so they are very poseable, but I wish the feet and legs blended together better. You can see a noticeable gap in between and it sort of shatters the illusion of a fleshy kaiju. It looks like he's wearing pants. All the limbs pop on and off with ease, a bit too much ease in the case of the right arm on mine. It tends to come off without much pressure. I suspect it's just this particular example since the left arm stays on tight.

So, what's the diecast content you ask? Well, the entire body of Gamera is made of plastic. However, almost the entire shell is metal. There is a small, half inch or so of plastic along the outside edges (safety reasons maybe?) but everything else is metal. It gives Gamera a good deal of weight (about 1.25 lbs worth anyway). It's certainly heavier than the featherweight "Chogokin" Gigan. 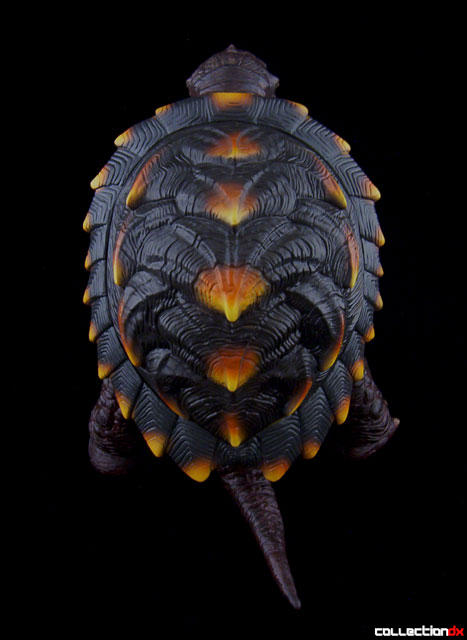 In summary, I'd say that if you are a kaiju fan, you should definitely get this. But if you're more into chogokin toys, then you can probably do without. At least for now, since the negative buzz surrounding the new Gamera design as well as the toy leads me to believe you may be seeing this on clearance in the future.

NekroDave how tall is this gamera?

Gamera is about 6.25" or 16cm tall. I never would have thought it when I bought it (that rhymes), but this is one of the only 5 diecasts I still have left, the others also all being kaiju.

Thanks for your reply man :)!

I have been seeing this gamera for cheap these days,will get him next paycheck ^_^

I'm a HUGE Gamera fan and I just can't get into this design. Maybe if I ever see the movie I'll feel differently,but I keep moving other DVDs ahead of it in the queue.
It just looks too goofy,and this is coming from someone who's seen Destroy All Planets at least a dozen times.

...and while I had my doubts about the cutesy Gamera in Gamera the Brave, the movie was really good. The evil monster in it, Zedus, is great and there are some very un-kid friendly scenes involving him. The movie overall hearkens back to the child as friend of Gamera days, however it was not as cheesy as I expected it to be. In fact there are some scenes at the end with Children helping Gamera that kind of pull at the heart strings and have you cheering them on. And yes Gamera does fly.

I picked up the dvd for less than $10 so even if you don't like it your not out much and I think people might be surprised by it.

It definitely makes me want to pick up this toy now. I just wish there was one of Zedus.