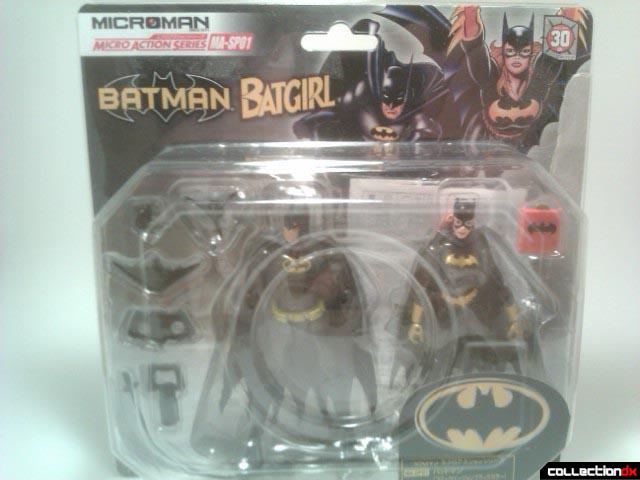 I was SO excited when I discovered that Microman had added Batman to it’s list of characters. I am a HUGE Batman fan, and I had heard wonderful things about the Microman series. I figured a mix of the two would be a match made in heaven. I couldn’t have been more wrong. 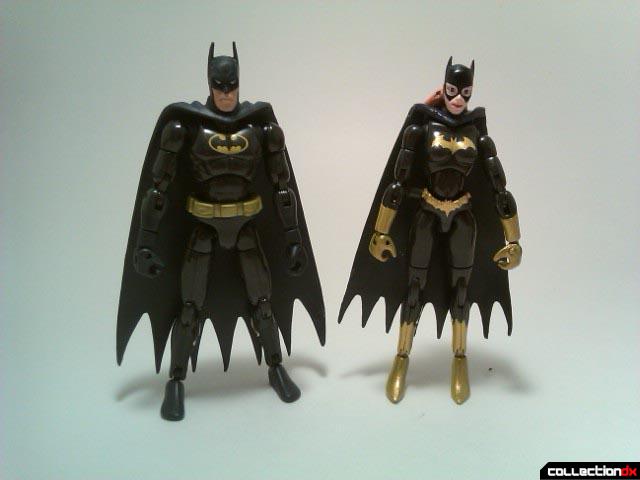 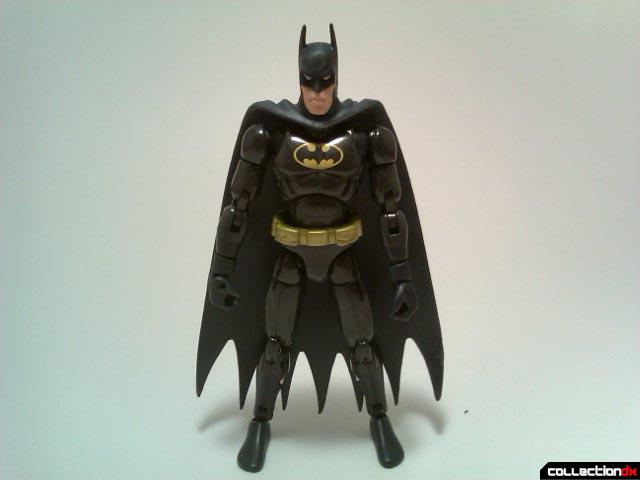 Batman needs no introduction, despite the fact that I’ll give you one. Bruce Wayne is the Caped Crusader who has defended Gotham City for the past 500 decades under the name of Batman. Over the years, he has had several crime-fighting partners in the form of sidekicks. This set includes Batgirl, in her costume inspired by the comics, and there is no Alicia Silverstone in sight! 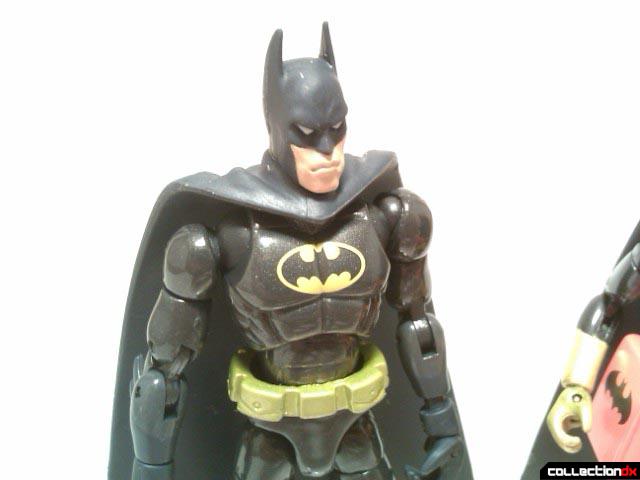 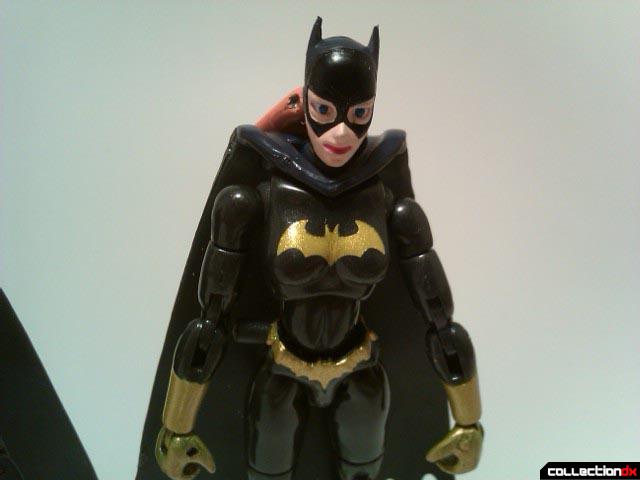 I am not a fan of this set, but I’ll try to be as unbiased as possible. I guess I’ll start off with the parts I loved the most. The sculpt is clean and mostly uninterupted, while the facial sculpts look incredible. The paint is very shiny and it really catches the eye. The gloves and cowel are done in a matte blue plastic, and it looks awesome. Batgirl looks just like she did in the comics (or 90’s animated series if you’re a child like me). Overall, they look great. 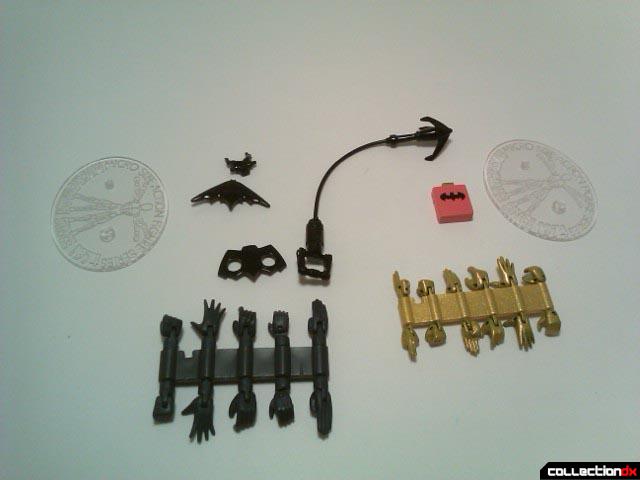 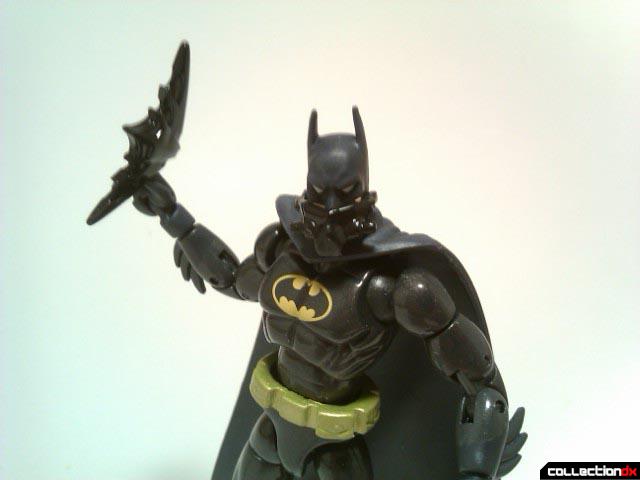 The accessory count is rather outstanding! Batman comes with a stand, batarang, grappling hook, a gas mask, 6 sets of hands, and some bat shaped… thing. I have no Idea what that other mask-looking thing is. Someone please tell me. Batgirl comes with 7 sets of hands, a stand, and a purse. Ok, she’s a little light on accessories, but hey, you won’t get this for her. Or will you? 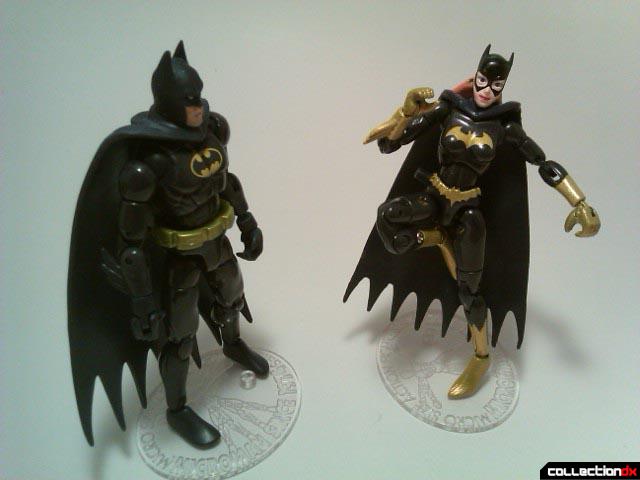 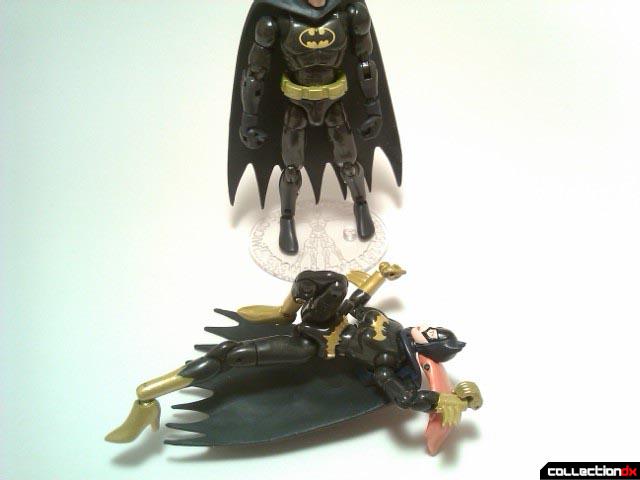 Articulation seems amazing if you just look at the figures, and in all honesty, it’s crazy to see this articulation on this scale. Both figures have a swiveling neck, double ball-jointed shoulders, bicep swivels, double jointed elbows, double swiveling wrists, an ab crunch, waist swivel, ball jointed hips, thigh swivels, double-jointed knees, and ankle swivels. Batgirl also has articulated hair and a cape swivel. So, these figures could achieve pretty much any pose you could ever want, if only they didn’t fall apart. 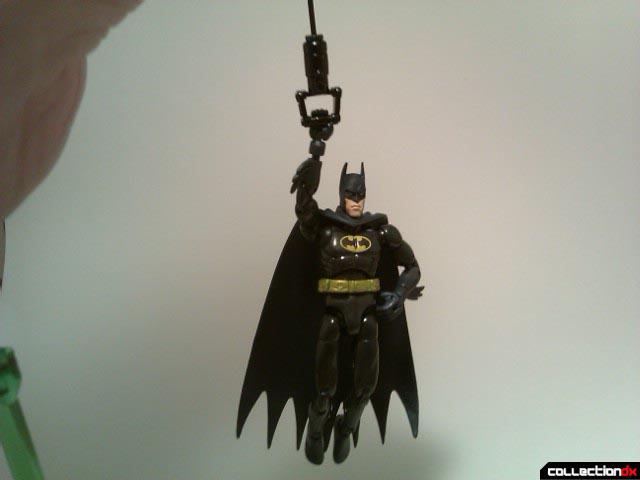 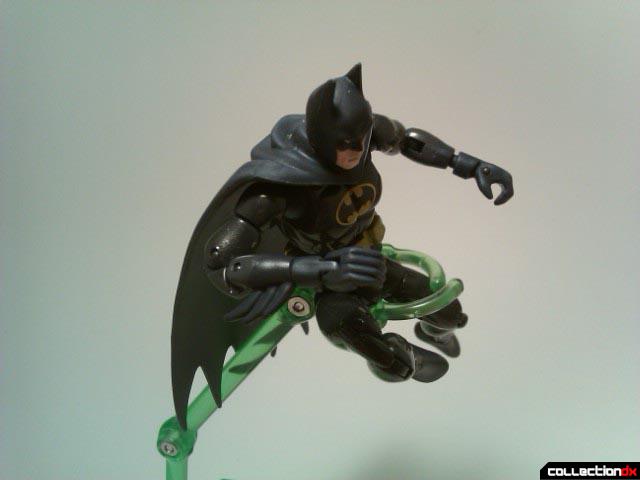 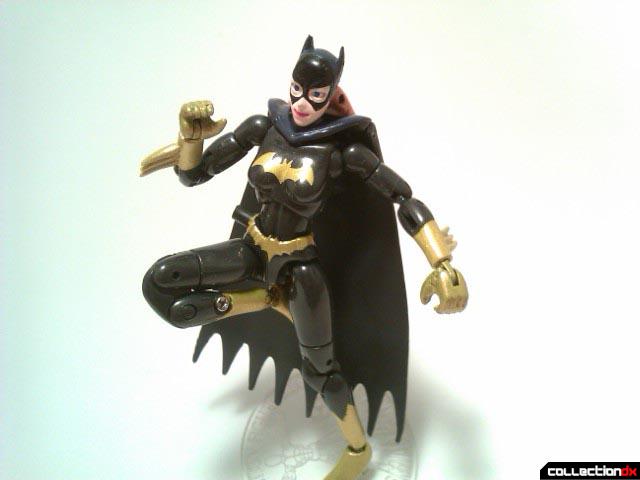 This is the big issue. These figures are the least sturdy figures I own. The heads WILL NOT stay on for any reason, and the hands fall out constantly. All the joints feel like they’ll pop off with the slightest bit of friction, and it’s moderately frightening. I would say that they are figures you pose and leave on a shelf, but they can’t actually hold a pose. The joints can’t withstand any weight at all, and once you finally get the pose you want, something will pop off. Batgirl is somewhat worse than Batman because her hair constantly gets in the way. Of course, Batman’s cape isn’t articulated, so that hinders things as well. All in all, these figures are incredibly annoying. 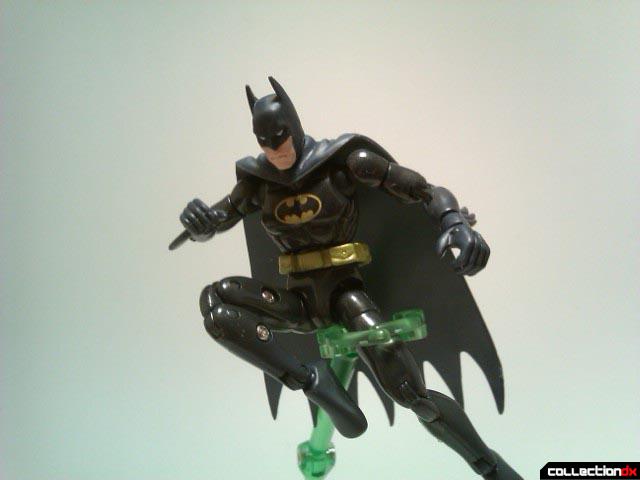 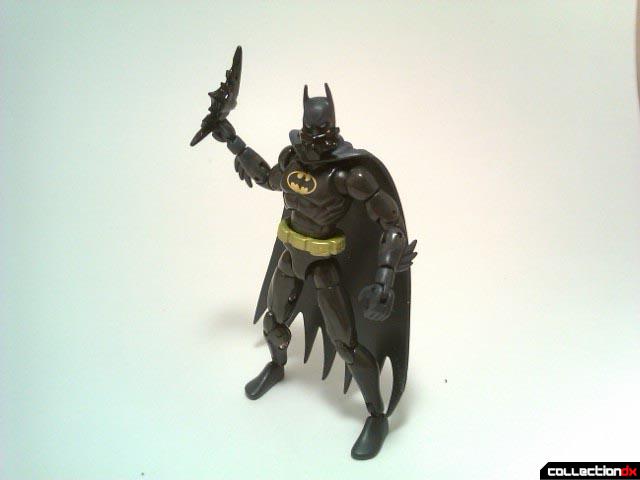 Normally in situations like this, I’d just recommend the figures to Batman fans. However, these figures are SO FRUSTRATING that I can’t recommend them to anyone. I bought the set on eBay for about 12 USD shipped, and I almost wanted my money back. Please, just avoid these figures like the plague. 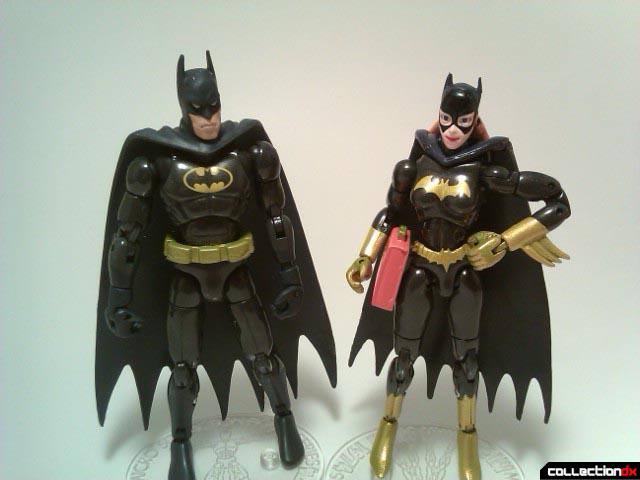 Regrettably, I've never heard of this toy line from Takara before. However, i really love the articulation displayed here. Hopefully they can get around to making a Batman Beyond version (unless one already exists!)

PS: 2 hours after writing my previous comment i just read the whole review and edited my comment, bummer about the figures being a real pain, was just about to order the package that only has batman. thanks for the great review, i hope they can go back to the drawing board and fix these issues.

That's unfortunate. Microman is a great toyline with a LOT of history behind it, but the 2003-2007 series was a bit unpredictable in terms of QC. Some of it is excellent and does not have these kinds of issues, but other parts are way too loose and fiddly. I'm not as into the licensed characters so I never picked up this pair, though I do have the Microman Flight Suit Batman (which is deliberately made more in the vintage Microman style) and it did not have any of these issues that I can recall (but believe me, I know these issues all to well in some of the other releases such as the "Road Spartan" figures, which refuse to stay together). Similarly, the Cyborg Superman Microman reviewed here earlier is a pretty decent figure from my experience. Predator and Aliens? No, not so much.

The 2003-2007 4 inch figures were done by Takara's former hobby division and were geared toward adult collectors and thus not really designed for "play" unlike all previous Microman toys...it was an interesting experiment while it lasted, but overall I prefer the reliability of the toys made by Takara's main division, both in the 70's and the 1999-2000 "MagnePowers" release.

Mazinkaizer: check out http://www.microforever.com for a great crash course on the myriad incarnations of the original Microman line, which is also the original source of the toys that became licensed by Hasbro as the Transformers... :D

I went through a Microman phase for a while. It always seemed that the design didn't quite match the reality, especially at that scale. Most of the Microman figures I had from that time had issues with loose or easily broken parts, unfortunately - the female figures always seemed to suffer more due to the slimmer proportions.

They did some really nice stuff design-wise, but often really fragile as well. I do like some of the choices they made, like the VOTOMs Fyana - at last, a nekkid plastic woman in a little transparent coffin. Takara, making your Japanese toy dreams come true since 197X... :-)

For what it's worth, I think those bat shaped unknowns are "bat handcuffs".

Ha. Thanks. I'm sure they said what they were in the booklet it came with, but it was all in Japanese! Lol.

I have one of the Microman figures that wears a Godzilla suit,but I'ver never opened it. Should I just leave it in the pack? I mean,I don't care about "collectible value" or whatver,but if the thing's just going to fall apart why bother.

I've always wanted one of those Godzilla ones...is the suit rubber? you'd probably have to worry about the rubber falling apart too if it is.

That being said, even as bad as this set is, It wouldn't deter me from buying it. I like Batman and wouldn't mind owning it..at least maybe leaving it in the pack to look at if they really are that bad.

I don't know if it's the same Godzilla one or not (there were a couple), but I have one of them and the figure is fine for that one still, no overly loose parts, though it can be a bit tricky fitting him into it...I actually recommend taking the arms and legs off the figure, fitting them into the "pants" and "sleeves", then inserting the torso and popping the limbs on. Also keep in mind that these Microman figures use reusable packages, so you can in theory try it out and if unhappy put him back on the card afterwards.

Microman with character line is different with usual Microman, where the usual have magnet for joints, and I think it's pretty sturdy. But I have the Cyborg superman (the armour is too loose), Alien (the ankle is broke) and Godzilla (the joint become useless once put inside Godzilla, and like microbry said, it;s very difficult to put the microman inside). A bit let down.

nope, these are the standard Microman body from 2000s. The character lines like ALIENS just used model kit type plastic versus the normal microman plastic like used on these figures.

They did a hybrid in 2004-05 ish of the "new microman" and magenmo which i think are reviewed here, that's what you're thinking of.

not THAT bad. This era of Microman is much closer to a Gundam kit than a GI Joe or Star Wars figure.

The plastic is almost like model kit plastic, and these were actually the last of the "figures" for this era of Microman, the rest of them were much more focused on being more "customizable building toy/model kit" like Gyloss with lots of combos but without the soul(!), or homages to movies/tv, either licenced like VOTOMS (AMAZING figures BTW) and ALIENS (trash figures BTW) or Takara's own homages (like the 2001 A SPACE ODYSSEY space pod accessories, the Microlady w/ Henshin Jaguar, or the Magneforce 90's tribute heads) - again QC is not good on this line but don't let it sour you to these, they can be fun and sturdy if you treat it "model kit" style versus "big sweaty ham hands" style. Takara even realized this later on and stopped making everything except the "material force" blank bodies.

These figures are really not that bad (see Microbry's comments above) but the QC is very, very spotty. It's funny, reviewers on this site seem to really give big passes to some toys from characters/shows they love (Macross/90s/etc) but are really, really hard on stuff like this (early 00s, older characters, non-jp characters, stuff distrobuted in the US as well as JP). The Batman line is no less fiddley than many other figures given positive reviews, so your mileage may vary.

Like the gear to stay on all the time, no matter what, or want to play with these as hard as a 7yr old, then pass. Like Batman, want stuff in the 3.75 inch scale, cheap parts for custom figures, something to pose and leave on the shelf, score these.

These are cheap and plentiful but when Microman comes back into fashion, which it will, these will get incredibly expensive and impossible to find like the rest of the licensed characters. yes, i am 3.75 inch obsessed, Microbry is right on about everything Microman/Micronauts and you should bow to him, and Microforever.com and Google Translate are great starting points into finding out more for yourself and make up your own mind.

I tried to curb my Batman fanboy feelings when writing this review because I was reviewing a toy, not Batman. I also believe in playing with my toys. When something gives no play value or severely hinders it's playability, then I take points away. These toys were impossible to play with.

Hello, probably you all ready know about it, There is one solution to the problem that All the joints feel like they’ll pop off with the slightest bit of friction, obviously i nos the better one, but at least for me it works fine.

I use "kola Loka" with "cianoclirato", i don´t know if english is the same name... the thing is you don´t let the joint to complete get glue, you put one small drop of the product, and avoid the joint to stay in one position for about 40 seconds to 1minute and a half, this because if you don´t do it in that way you coul actually get the joint completly glued.

If it works, the joint is actually more firm, i do this with my Microman Batman and with the Microman Celtic Predator, and it works, but as you all ready stated, these figures are not playable toys, now they could stand itself, but they continue to be fragille, and i only do it with the head and the hands, and completly glued some weaponds to some of the hands they have, as i said before, is not the best, but i works if the owner is adult collector, have i nice day