Although most Japanese toys from the 60’s and 70’s generally still hold up well over the years Japanese model kits from the same era generally have not faired too well. 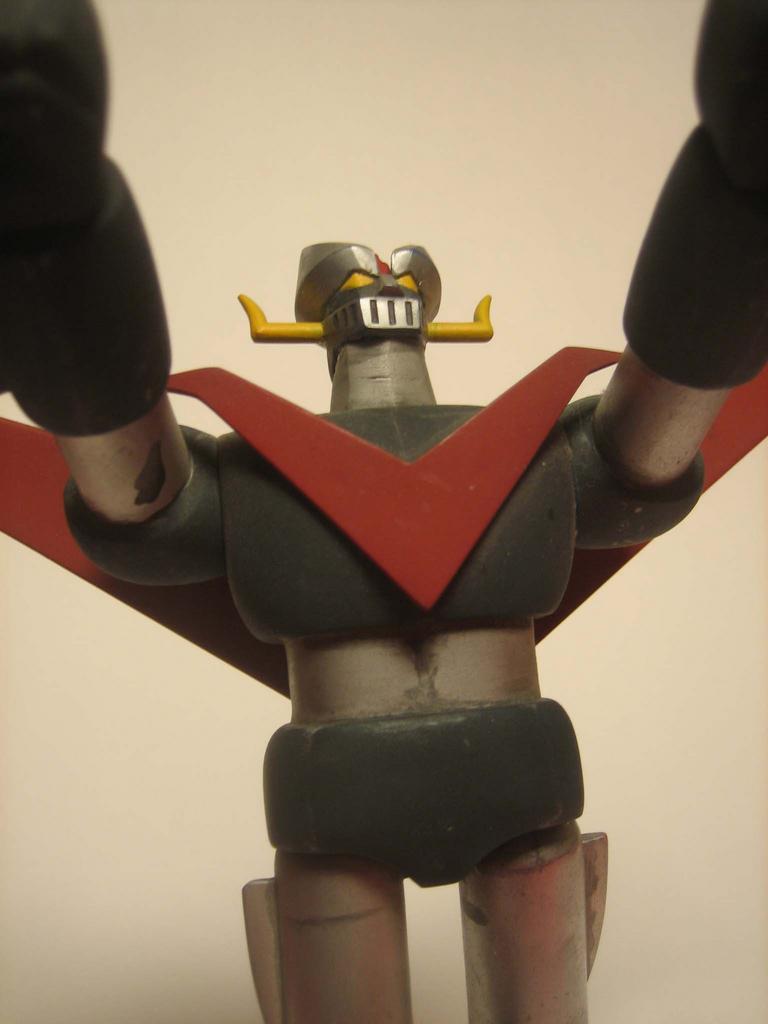 Before Bandai started to produce their famous Mobile Suit Gundam Model kits most Japanese Model kits were seen as unassembled toys that one puts together and when through, still have the same play value as toys. Usually the kits had the same gimmicks as their toy counterpoints: wind up engines, shooting missiles, slot car conversions, bonus figures, collector cards just to name a few examples.

Being an avid fan of 60’s and 70’s Anime and Japanese live-action programs and an avid model kit builder things can get a bit shady when purchasing my favorite model kits representing subjects from the 60’s and 70’s. For example most the model kits from this era never pictured the actual model kit on the box. Usually it was beautiful oil or watercolor rendition of said subject on the box art. Also the kits were just as expensive as the toys. When I arrived home and opened up the box I would be disappointed to find that the model kit that I just purchased was nothing but a simplified representation of said subject with the likenesses horribly out of scale. Model kit manufacturing techniques and what modelers expect from a Model manufactures have improved signifiently since the 1960’s when many of these model kits were originally produced.

What I plan to do is review some of these older model kits and see which ones still hold up over the years and which ones should be treated like garage kits that one has to scratch build parts for or be built out of the box as historical model kit representations of our favorite subjects.

I purchased my Great Mazinger from the model kit aisle of the local drug store roughly in the early 90’s for what I remember $10.00. I believe this model kit is a Korean bootleg as it is from a company that I have never heard of before. It also looks like it was originally manufactured as a toy that was back engineered into a model kit. Also this model is called Great Maginger as opposed to Great Mazinger. A mistranslation or a licensing avoidance, perhaps a little of both. I would have to believe it’s a box scale somewhere between 1/100 scale and 1/144 scale. 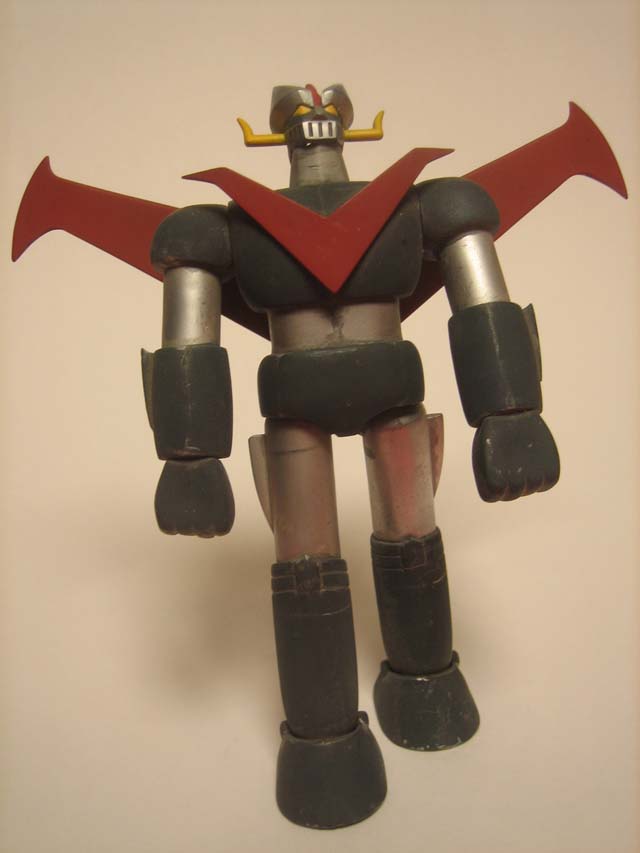 Box art includes somewhat decent airbrush picture of Great Mazinger on top of and around the sides of the box and some small photos of three built, but unpainted, versions of the kit inside. It appears it was modeled in at least four different colors of white, blue, red and silver. My version came molded in dark blue and dark red with the sword molded in silver. Modelers definitely prefer kits modeled in white or light grey, as bright and dark colors are difficult to hide under lighter colors. Again going back to the toy theme most likely in was molded in so many colors so kids did not have to paint the model kit.

One item I first noticed was that the kit was modeled with screw holes in Great Mazinger back inner legs and behind the arms. This is where I believe it was a toy at one time as the model kit does not include any screws and the instructions do not refer to the holes in anyway. One of the most time consuming aspect in building this kit was filling in all those holes with sheet styrene.

The kit went very well together although I wish there was some more details inside the head area, especially with Mazinger’s spaceship. The kit comes with no clear part. I would suggest scratch building some clear parts into the spaceship window, as it’s an open gap. A modified Lite Bright peg would go great here. The Mazinger face likeness looks great and modeled in crisp details and captures the Go Nagai’s design quite nice. 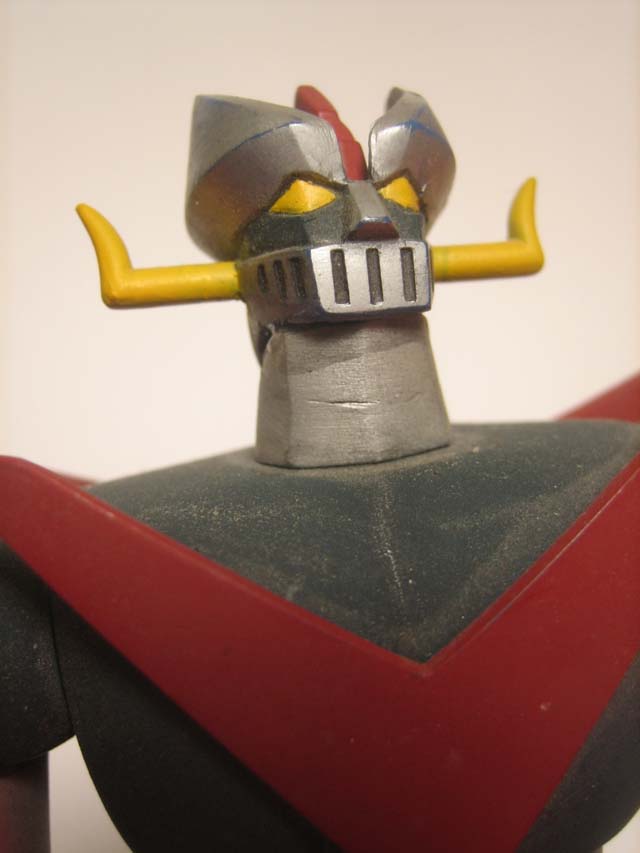 Many robot kits from this era had very basic movement and this model kit is no exception with movement limited to circular movement in the head, arms, wrists and very limited movement of the elbows, knees and feet. Because of this lack of movement I decided to build this kit in a static position of Great Mazinger ready to fire his rocket punch missiles. Because of the lack of internet resources back in the 90’s I did not scratch build blades coming from the forearm because simply I did not know what they looked like, although these days I would have added those blades. With its lack of movement I was still able to get a decent stance from the kit. 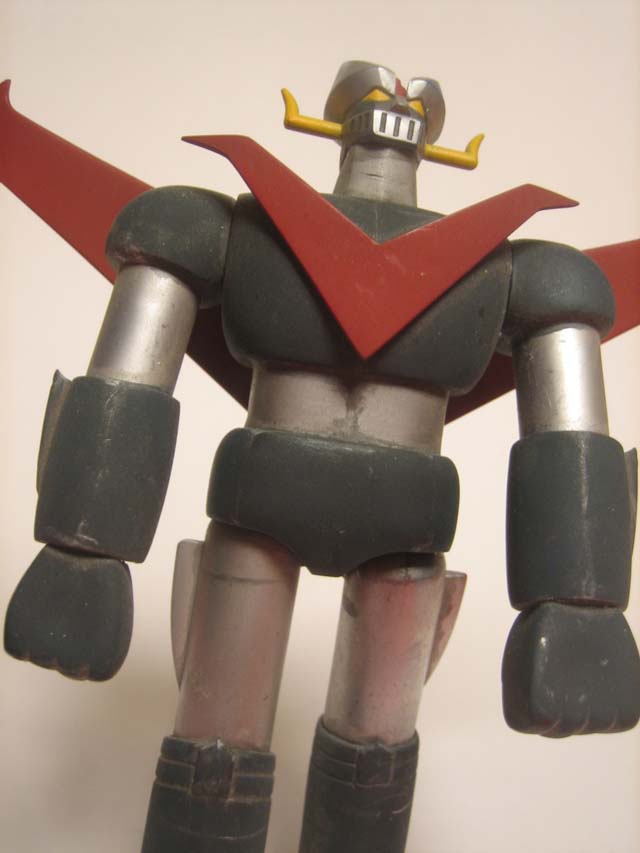 I scratch build the head in a looking up position with some sheet steryne. I also modified some of the enclosures on the jet pack and added nozzles to the jet back wing. I also filled in the holes in the hands, as I was not going to use the sword. The jet pack wings were curved around the leading and trailing edge with sandpaper because it looked a bit flat. 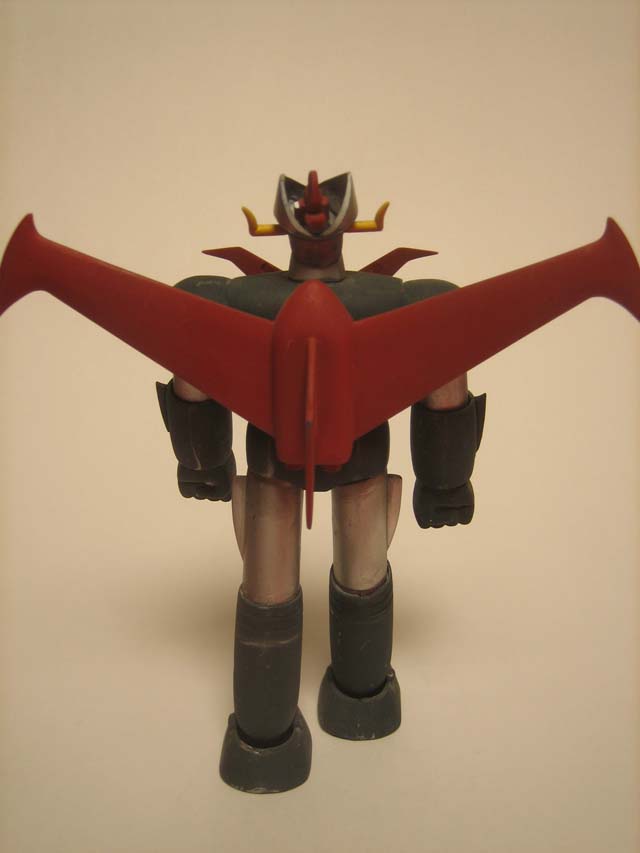 The kit was painted using Model Master flat non specular dark sea blue, Testers aluminum metalizer, Testers flat yellow and Testers flat red with a Badger 350 airbrush. I did not spray a flat or gloss sealer although looking back a flat coat would look good. The weathering ideas came from an old 1986 issue of Hobby Japan that had some pictures of a well built resin Great Mazinger model kit.

The model kit comes with a sheet of stickers for the wings and belt area. Again a very charming aspect of the kit but something that better represents the toy appeal of this model kit.

Although this model kit had some issues with the inner head details and the numerous unneeded screw holes and being modeled in some really awful colors, generally speaking this model kit is holds up quite well and with a little work could be converted into an ace looking model kit. I build this kit about at least 10 years ago and if another came my way most likely I would like to have another attempt at it and I would purchase another one. It could also be built into a nice looking toy model with the stickers and sword, perhaps best painted in glossy colors for that Popy look. Either way I think one would be satisfied and impressed with the results. 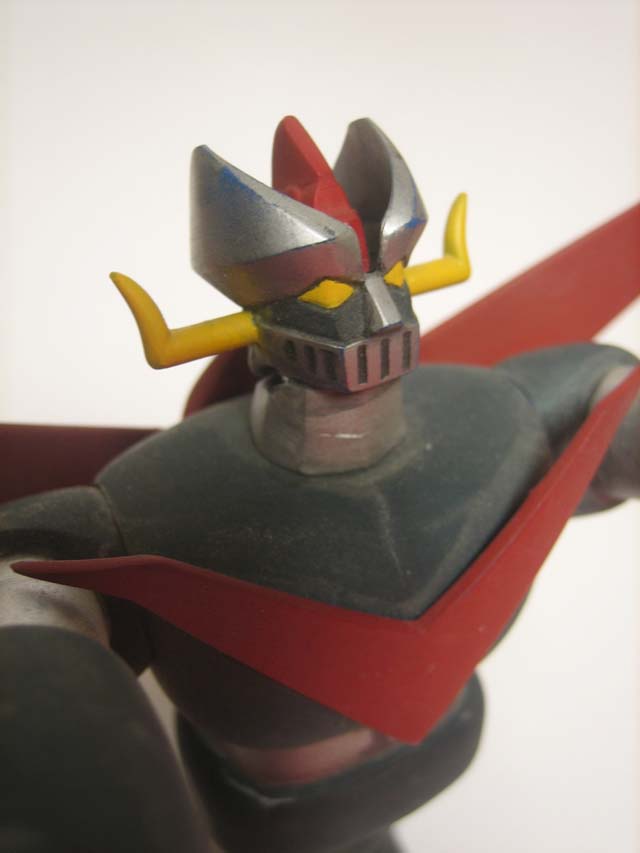 Are you sure it's bootleg? Because from the picture, it's quite good to me. And you said it went very good together. Maybe it's not a bootleg, just some Korean toy company made this. Anyway good review... and a good model, too.

Thanks for the great comments it's appreciated. I noticed that I forgot to post the picture of the box, I should post that so people can decide.

Oh, definitely post the box...I'd love to see that...and more of these sorts of kits!

And while we're at it, I'd love to see The Big R's Grendizer, too. Can't have too many Grendies!

I sold it early last year when I saw pre-orders go up for the SOC Grendizer re-issue.

I wish i could show you a picture but i can't find one. it shows up around once a year on ebay italy, usually cheap, sometimes with the box, mostly without.

...grendizer set in the 1970's in Italy. It was my 1st Grendizer toy as an adult collector, and it was pretty nice with shooting fists, and molded color details. Maybe this is a bootleg of a similar Atlantic great Mazinger? or a re-release?

Very cool and interesting post! I'm not a modeler so I'm facinated finding out about this cool Great Mazinger! More!