I am still waiting for a proper Dunbine revival*. Dunbine was just nuts. For those unfamiliar with the cartoon: you know how the Japanese have a penchant for grafting giant robots onto half-understood western mythology? Aura Battler Dunbine is essentially the pop-culture idea of medieval Britain, but with robots. Big, insectoid bio-machines. Miyatake’s organic mecha designs are groundbreaking, and presage everything from Guyver to Evangelion.

I really enjoy the anime, but maybe it was a tad too exotic for the early eighties. It will be back; mark my words. Someone’s probably working on it right now. But until then, we have a bunch of classic Clover gokin still kicking around. Well into Clover’s decline, the legendary diecast purveyor bought the license to manufacture Dunbine toys. The show was not successful.

The toys were not popular, but they were successful in their own way. Clover released Dunbine figures in several scales, but the 1/58’s were the work-horses, ST-sized bricks with a couple of accessories and basic articulation. By today’s standards, they are pretty clunky, but by the standards of the mid-eighties, they were right up there with contemporary Popy or Takatoku fare. Dana O’Shee is great right out of the gate. Look at this box. A hell of a box. 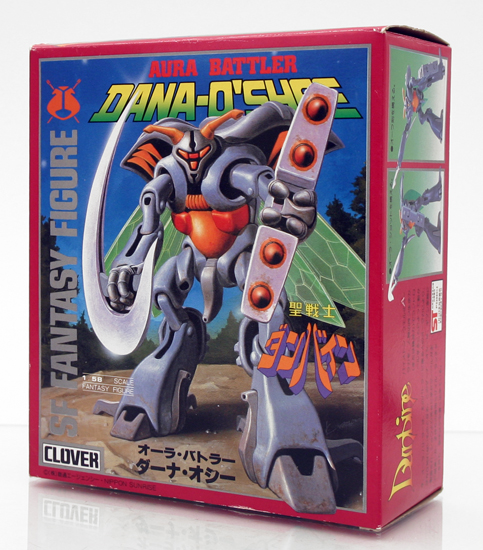 Clover’s Dunbine boxes all featured exceptional box art. I dearly wish someone would put paintings on the fronts of boxes again. Back and sides feature illustrations and photos. 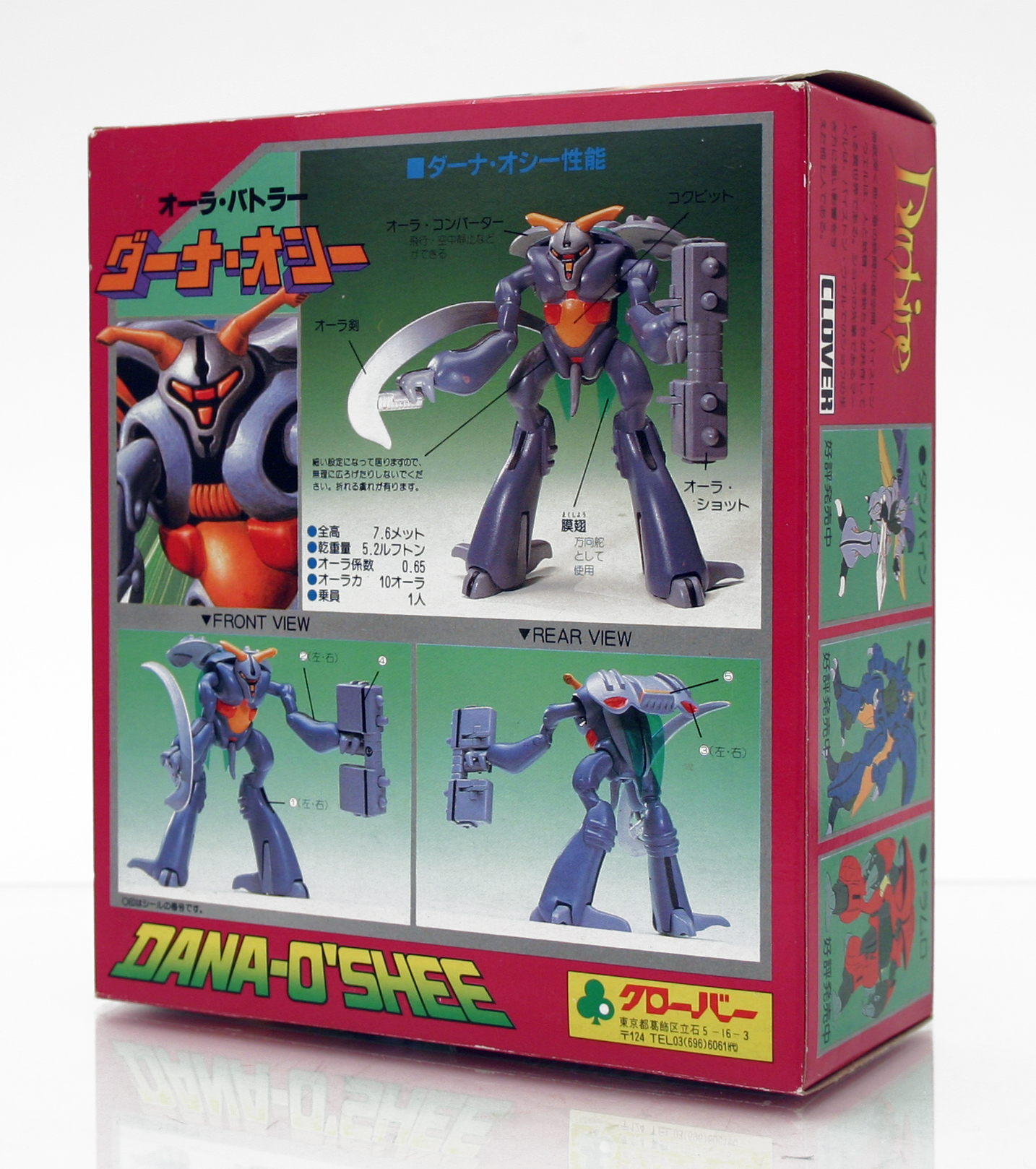 Inside the Styrofoam cocoon, Dana O’ Shee rests with a decal sheet and two accessories: a chromed scythe and a projectile-firing gun-thing. 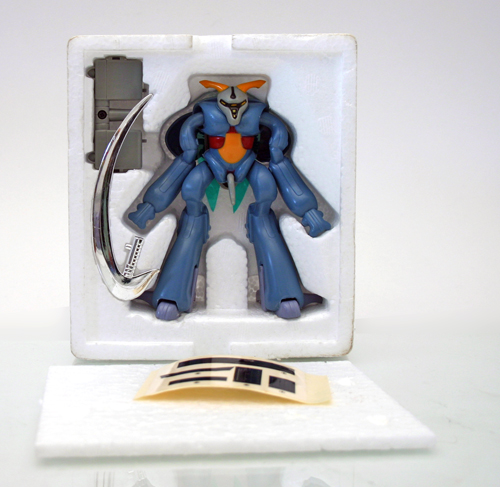 Dana is a sturdy, heavy piece. The torso and feet are diecast, but the rest is made of a remarkably solid plastic. 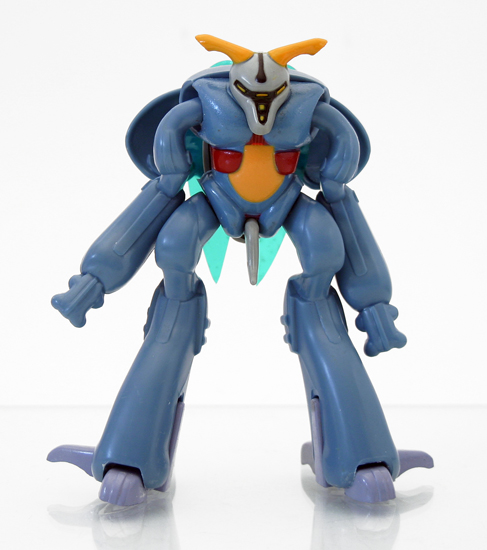 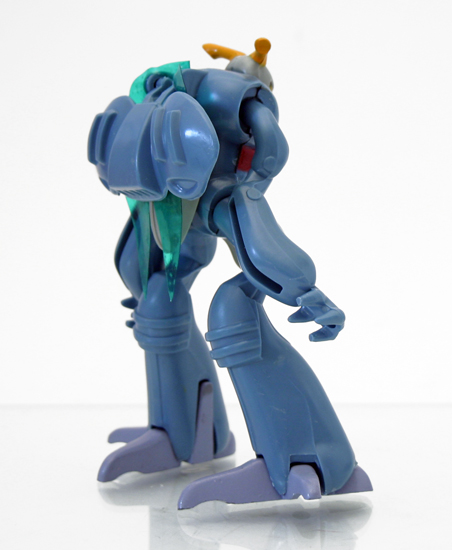 Paint apps are handsome, if a little fuzzy around the edges. My favorite detail is the clear vinyl wings! 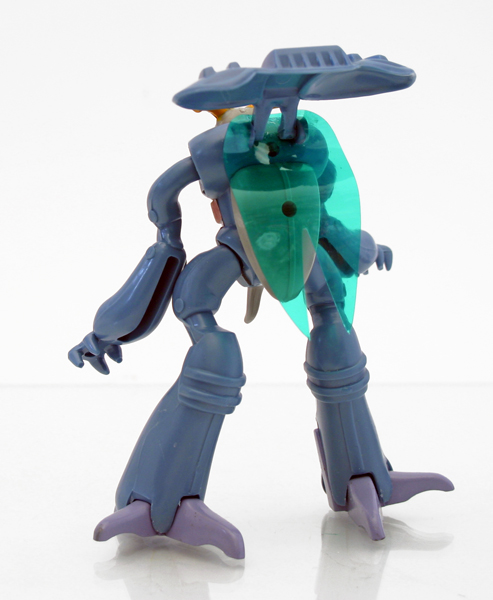 The arms, legs, and backpack all rotate, but to little practical effect. Those bizarre buggy arms look weird in any position, and just getting them in front of the legs takes some doing. You can move the legs, but… 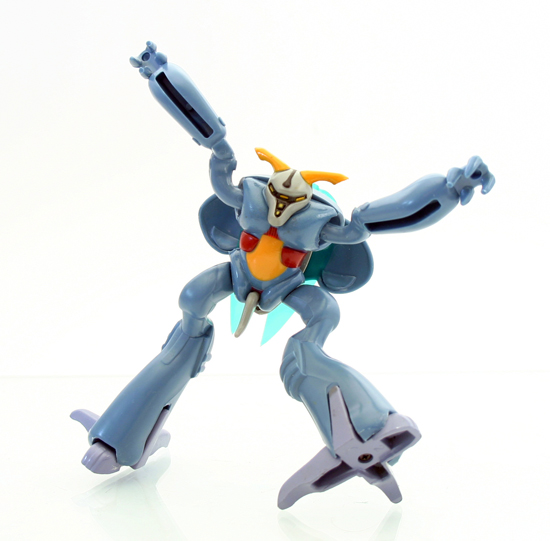 The accessories aren’t much better. The gun is solid enough, if a little plain, and it does fire little missiles. The scythe, however, cannot properly be held by either of Dana’s two claws. I really had to work to get it placed for this photo. 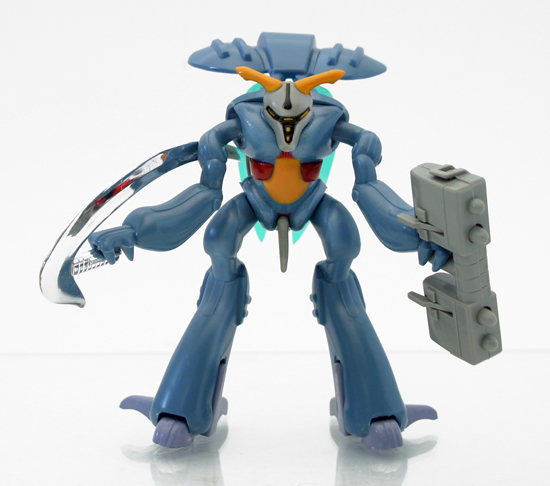 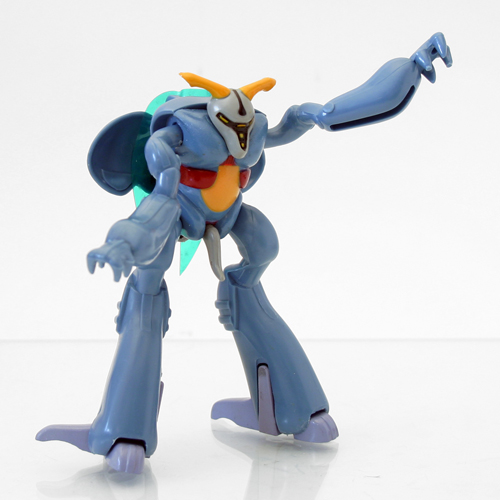 *I am aware of the SIC style Bandai figures released a few years ago, but those seemed a little half-hearted and ill-timed. Or maybe nobody really wants a revival.

There's the figures by WAVE (or Megahouse, I don't recall which) for the Wings of Rean OVA. That's probably as much as a revival as you can hope for, although I'm sure Bandai will do SOC Spec (or Armor Plus) for Dunbine.

awesome, glad to see this reviewed. I have a couple of these cause I just love em. Its not really my style of robot design, but Dunbine stuff was a part of my childhood, even though I had no clue who they were. I love the artwork on these boxes.

I need one of these so bad... and some of the other Clover Dunbine stuff, too.
I have the 1/46 Dunbine, and some of the tiny Aura Battlers from Seven, but the clunky, weird, mid-scale Clover items are in a whole class of their own.

I have- somewhere buried in my closet- a 5" Dunbine. I do not know when it was made or by whom, but it has mostly ABS with die-cast feet, and a removable pilot & cockpit window. A sword was provided, but I don't know if if came with the sheath or Aura Cannon forearm guns. Poseability was due to a series of PVC/metal one-axis joints, like an early version of Revoltech, so it has a good range of motion, including wrists and ankles. It has no paint save for the eyes and yellow crest markings on the head.

Anyone heard of this, or if they made any of the other Aura Battlers? (I haven't tried looking for them online yet.)

that's the clover joint model. There are a ton of knockoffs out there; I have a couple. It's listed on tbdx's data file: http://www.toyboxdx.com/datafiles/data/clover/

Thanks for posting it.

I used to have this toy, as well as a few other Clover toys from this series and Srungle. I got them real cheap about 13 years ago. Man this review brings back memories. I don't remember what I did with them, probably sold or traded. Thanks for this review...makes me want to buy them again. I know they aren't very popular but I actually really liked the old Clover toys from the early 80s and the cool thing is you can still get these for pretty cheap.

Yeah, I paid no more than 15 each for the 2 I have, no one was bidding- within a couple months of each other. They are both in unplayed condition and intact sticker sheet, so they should be easy to get ahold of cheap if you consistently keep an eye out for em.

At the 2009 Summit, there were at least three of the darn things on the selling tables. It's just one of those pieces everyone (myself included) seems to get.

One of my favourite anime openings!

For some reason, despite having had the opportunity, I've never really sought Dunbine toys - I always thought they were much worse looking than this. Having seen a couple of articles recently, though, they seem to be much better than my impression of them.

Clover was a great toy company, I had the Dunbine clover in the scale for many years and it was a great toy. I sold it to thin my collection but I have no complaints with this line or most anything by Clover. These toys were easily available back in the 8t's and no collection isn't complete without a Clover toy.

I've had this one on the chogokin shelf for many years. I really like it for what it is. Simple, well executed, FUN!
And of course...die cast parts.

I picked one up back in December on eBay virtually deadstock for $4.95 with no other bidders. It's a real joy, but a terrible likeness of the line art. The thing reminds me more of the Bugroms from EL-HAZZARD!

I saw a couple episodes of this and liked it. I would say we'll almost definately see a remake or an "alternate universe" or something within the next decade.

Years later, I would have loved to hear your take on all the Robot Spirits Dunbine figures they put out.