FansProject has made quite the name for themselves making upgrade parts for Hasbro and Takara's Transformer toys as well as producing their own original transforming robot toys.  Warbots was FP's first line of complete figures, followed by the Causality line.  The Warbots line seems to encompass the more complex figures, starting back in 2010 with Defender.

Steel Core is the second release in the Warbots line.  Where Defender tackled the vaunted triple-changer concept, Steel Core was designed as a modern take on the Powermaster/Godmaster concept.  I have a serious soft spot for transforming mini-figures that interact with larger transforming robot toys, so I was sold from day one. 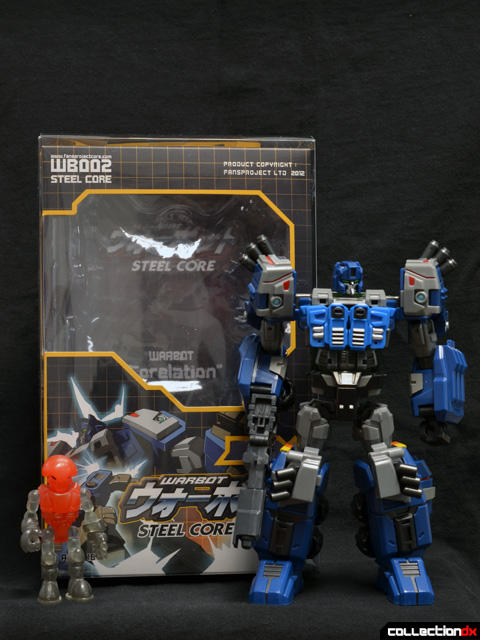 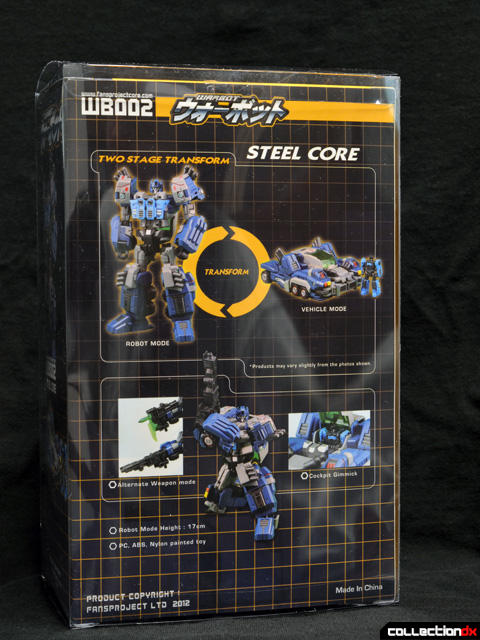 Steel Core comes in a nice box with plenty of premium touches.  The box is printed cardboard, but features a clear acetate outer box that protects the package.  Inside are the figure safely encased in vacuum formed plastic, two accessories in bags, a gorgeous full color printed instruction manual and comic, and an addendum instruction sheet. 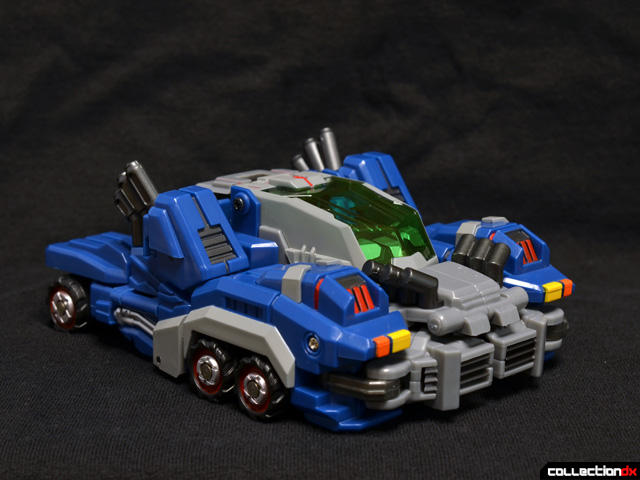 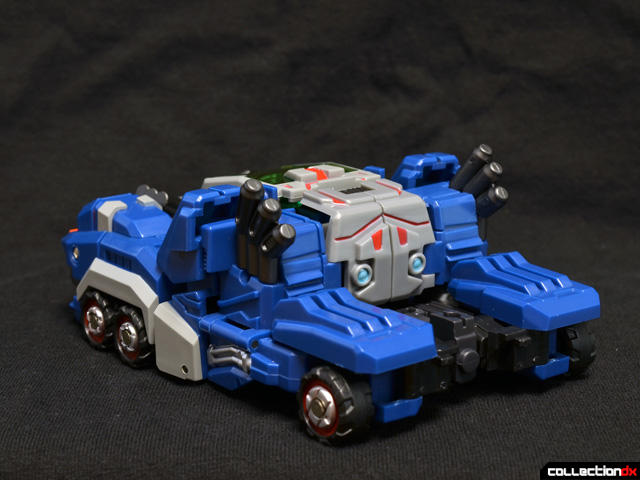 In vehicle mode, Steel Core is a futuristic armored truck.  There are design notes from Transformers: War for Cybertron Optimus Prime and War Within Grimlock, but Steel Core manages to strike its own path and looks suitably original.  There are lots of locking tabs to keep everything secure without being frustrating, and I have managed to get all six wheels to roll at the same time. 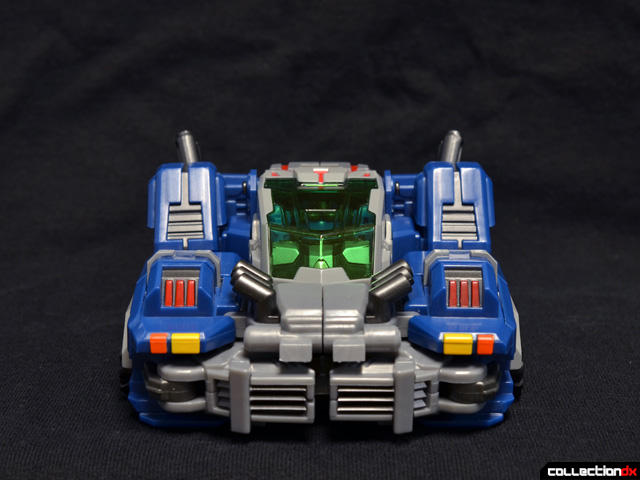 Truck mode is chunky and sci-fi-ey and looks totally impractical, following in a long tradition of transforming trucks with no suspension and likely terrible handling (I'm looking at you, Mugen Calibur.)  The clear green cockpit makes a nice focal point on a pretty coherent two-color design. 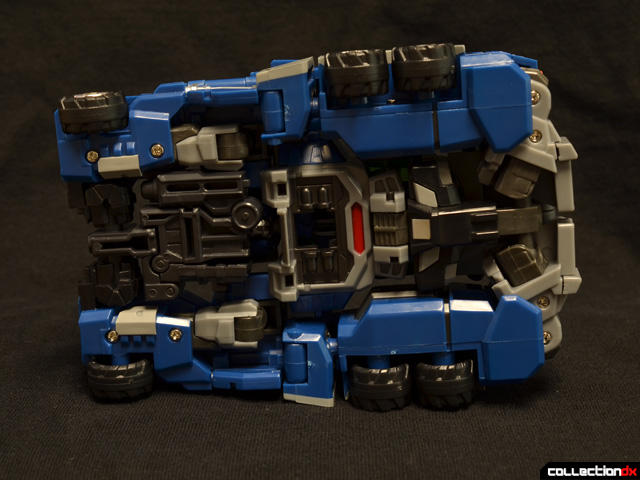 From the underside, Steel Core's truck mode is surprisingly clean, with no obvious robot heads or hands or anything. 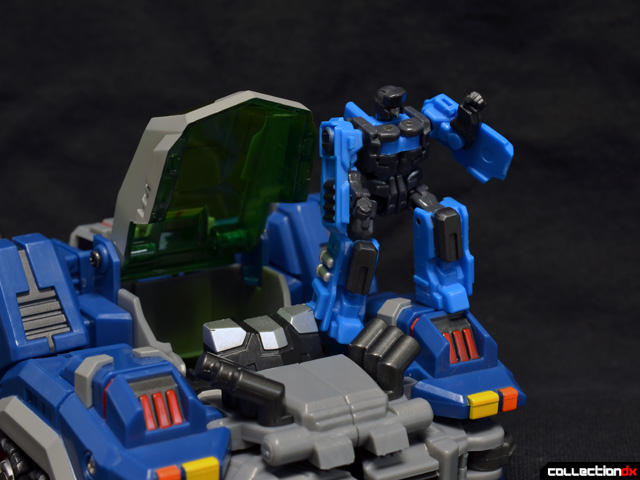 Out of the opening cockpit comes Steel! 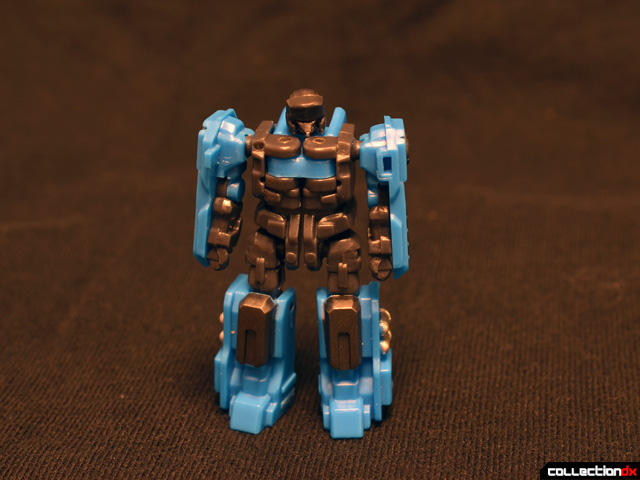 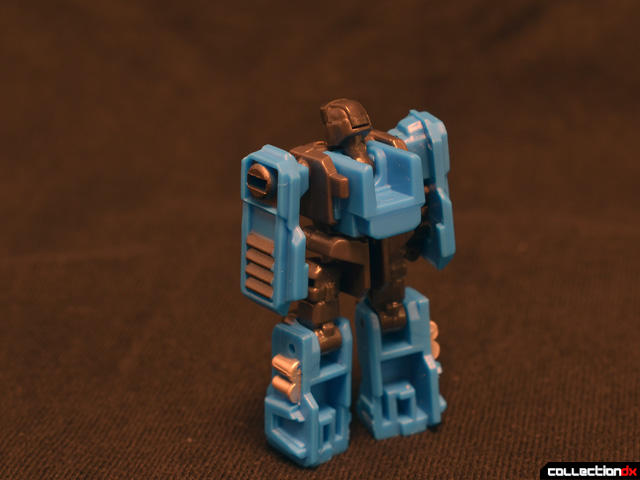 Steel stands not quite two inches tall and features admirable articulation for such a small transforming figure. 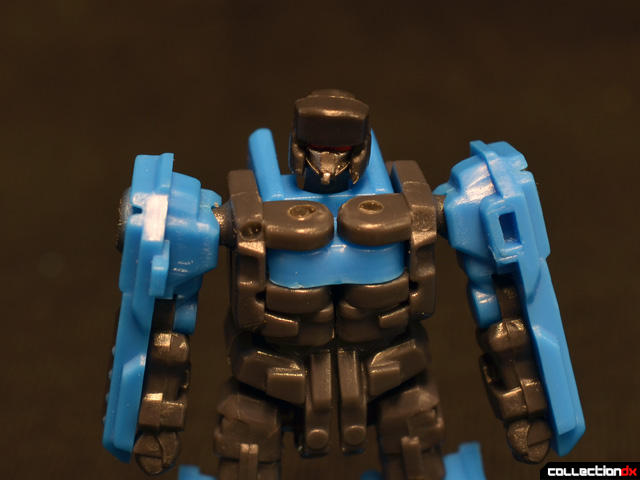 Detail is razor sharp and fine.  I was blown away by the face sculpt and paint. 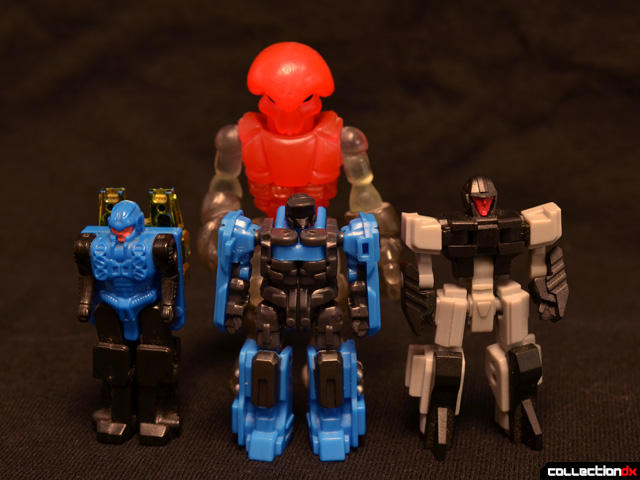 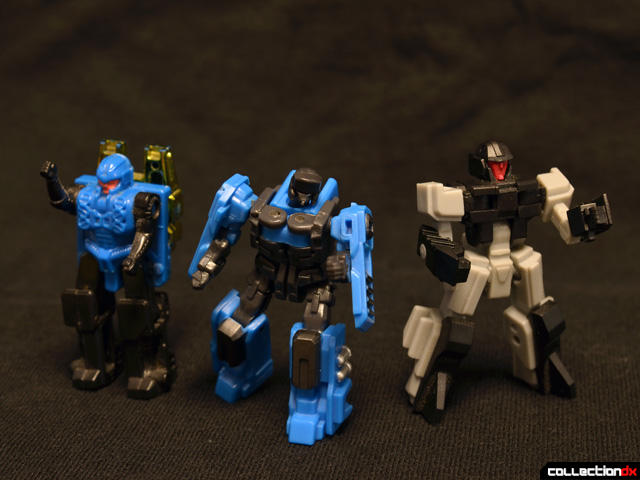 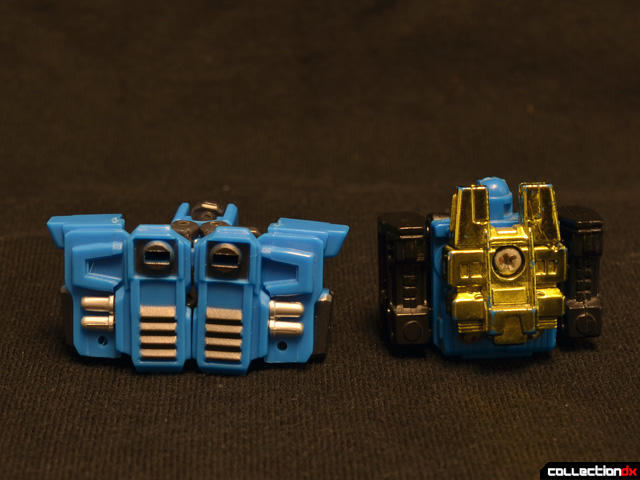 Steel transforms into the chest plate and core for his not-Transector.  Transformers Headmasters started the idea of smaller robots piloting vehicles that turned into larger bodies for them (I ignore the US version where the smaller guys and vehicles had separate brains and personalities because that's terrible.)  Godmasters (Powermasters in the US) took the concept one step further with little robots that turned into engines for the vehicles that, when installed, unlocked the figure's transformation.  There were also Breastmasters, who's smaller partners changed from animals into breast plates into guns.  Unlike vintage Godmasters, Steel Core can transform without his core in place.

The one tragedy here is that Steel is not compatible with official Godmasters, but that probably would have been crossing an intellectual property line. 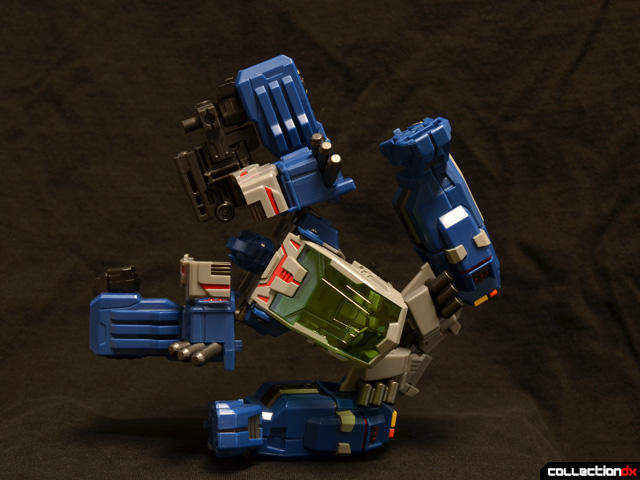 Steel Core's transformation from truck to robot is surprisingly simple, but different enough from other transforming trucks to still feel novel. 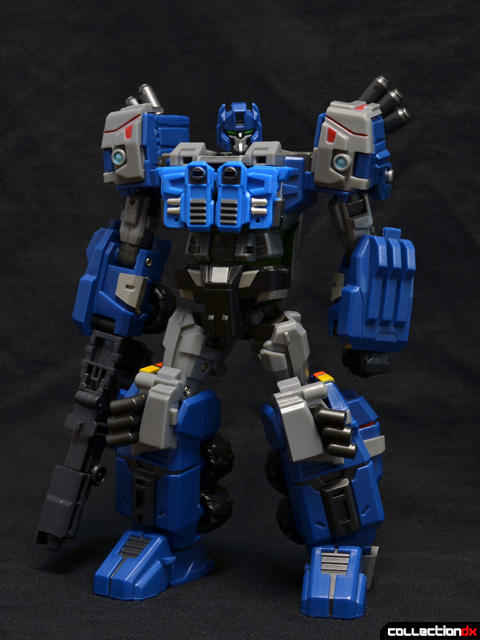 Steel Core stands around seven inches tall and is badass.  Everything about this toy is plush and luxurious.  The sculpt is sharp and the paint is flawless.  I know it's apples and oranges, but this guy beats out official Transformers toys in every respect. 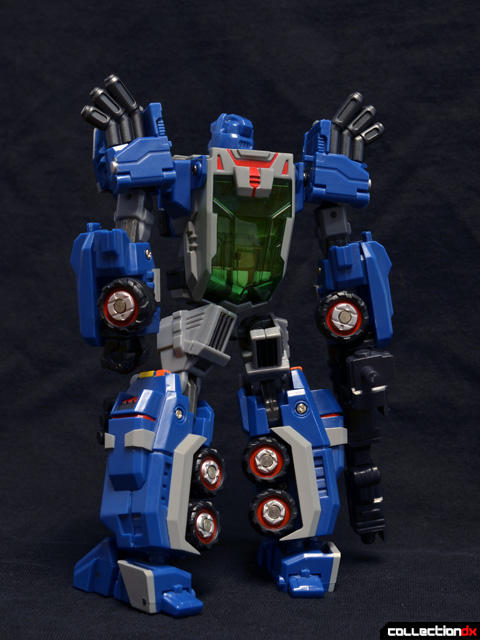 From the back, there is a little kibble, but not much.  I love how clean both modes are.

Steel Core has poise, but not dreaded crotch thrust. 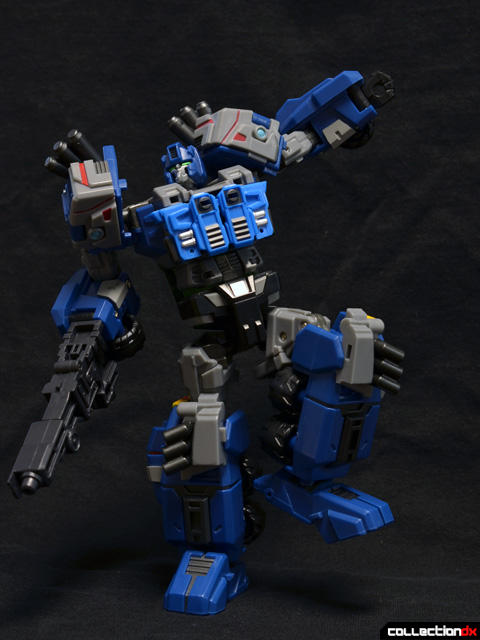 Articulation is great, with tight ball and hinge joints all over for a pretty standard range of motion.  Highlights include deep ankle motion and some expressive play to the shoulders. 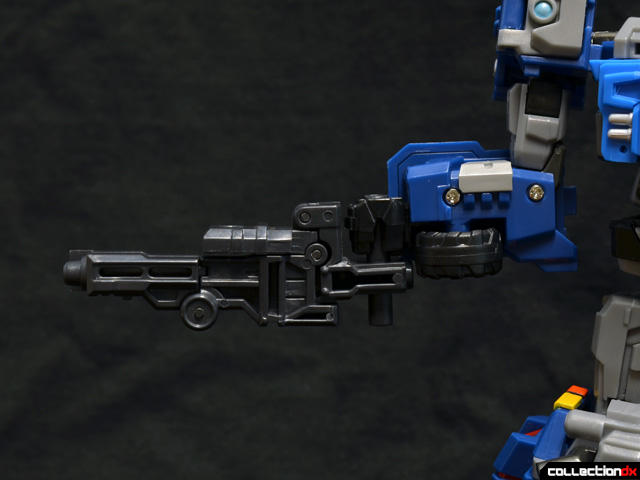 Steel Core's weapon is its own complex transforming toy.  Go back to the pictures of vehicle mode now and realize that the gun is an integral part of the transformation, and that Steel Core can be transformed without moving the gun.  THAT's perfect transformation. 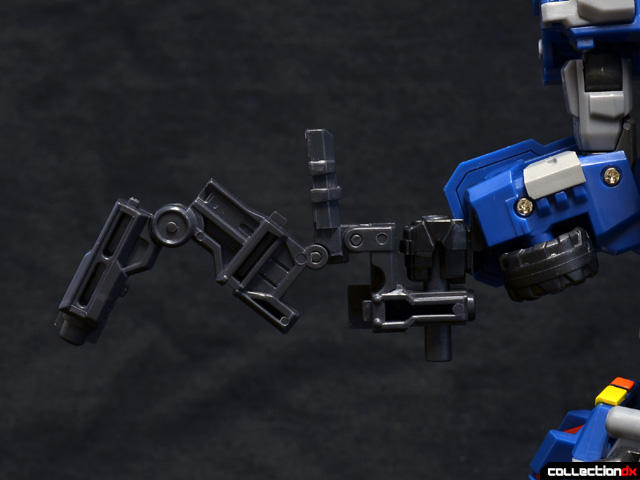 There are so many moving parts! 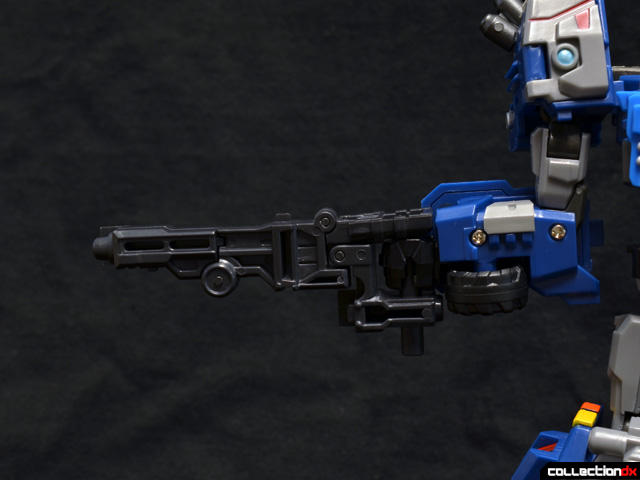 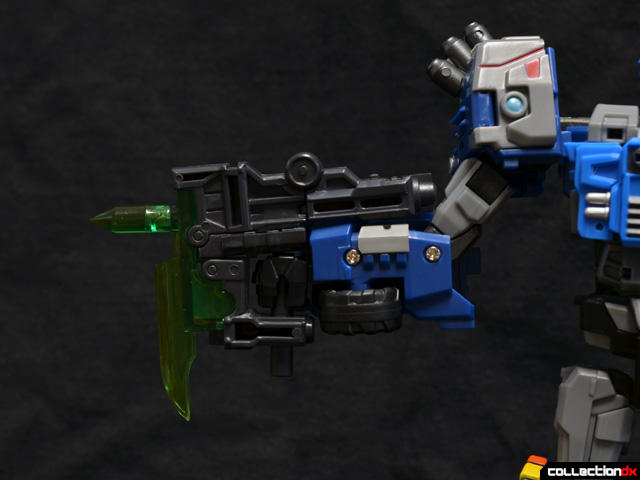 ...and this crazy bladed pile-driver pistol thing.  The clear green blade part is razor sharp and perfectly clear, and only works in this one mode.  I wish it could be held as a hand weapon, but since it does not have any other use or place to go in vehicle mode, it went back in the box. 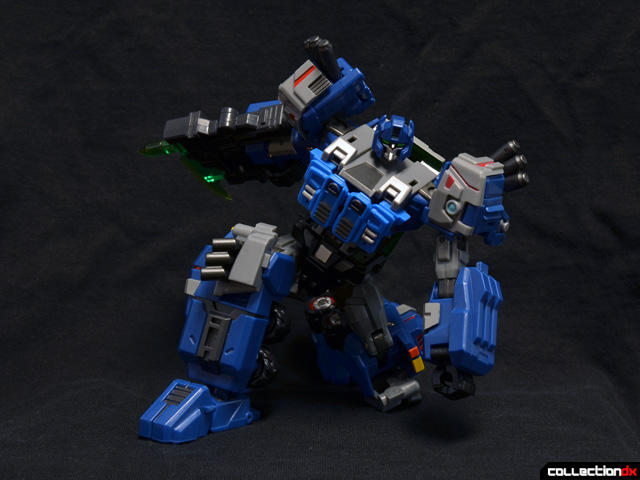 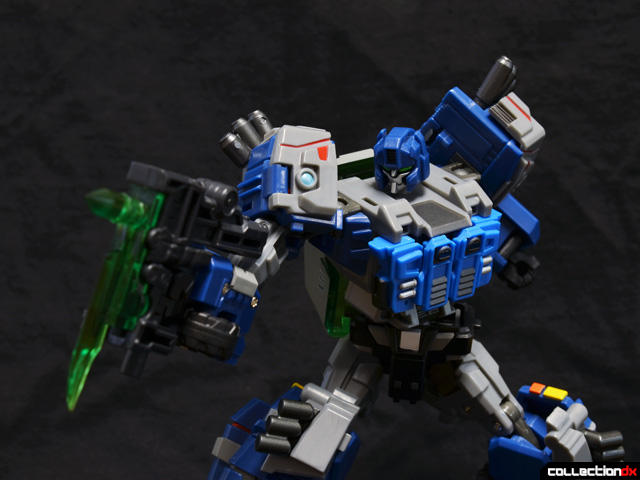 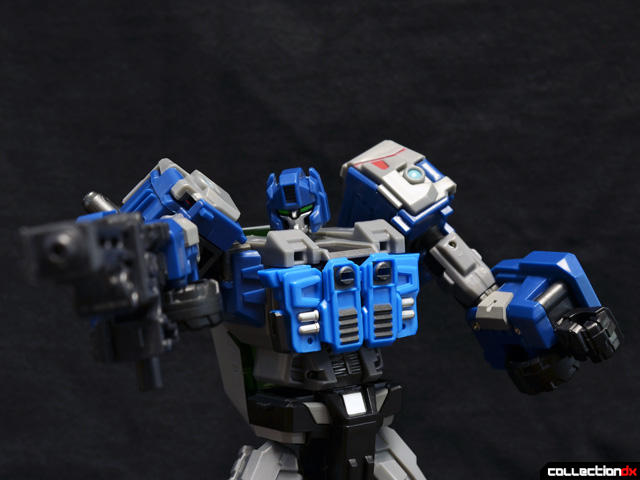 Both gun modes look great, and Steel Core has the right motion to put both weapons to use. 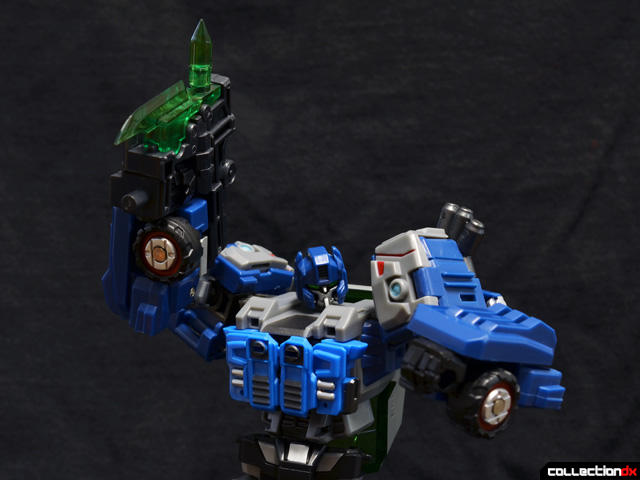 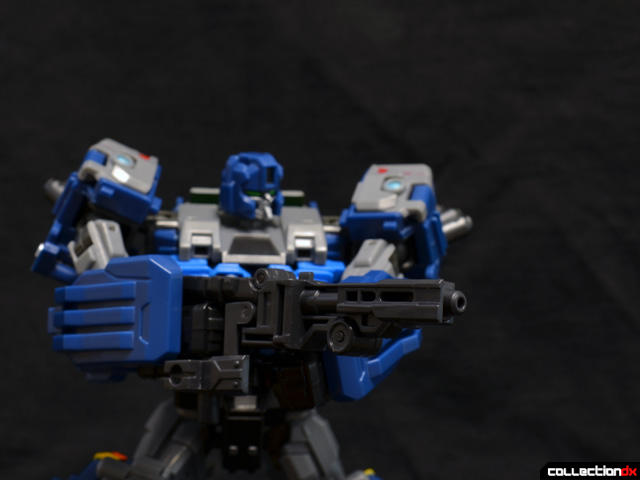 The whole robot sculpt is a great mix of bulky and sleek, for a powerful and dynamic feel.  It's not easy to pull off such a nice robot mode that's clean and transforms well, but FansProject nailed it. 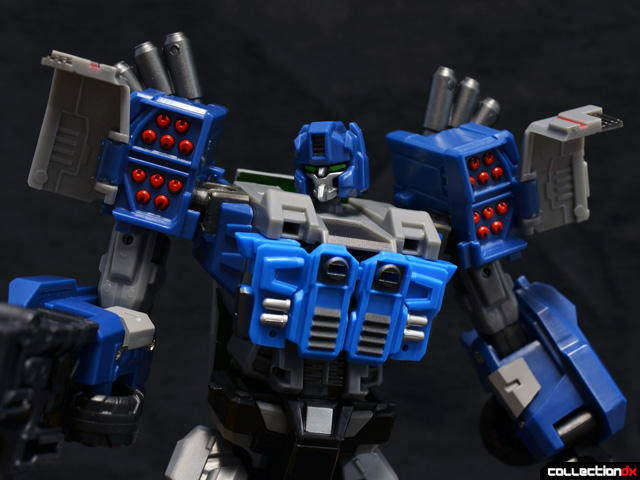 Steel Core features a little more firepower in a pair of shoulder-mounted micromissle racks.  The covers for these also play into the transformation, and I love how every feature has a use in both modes. 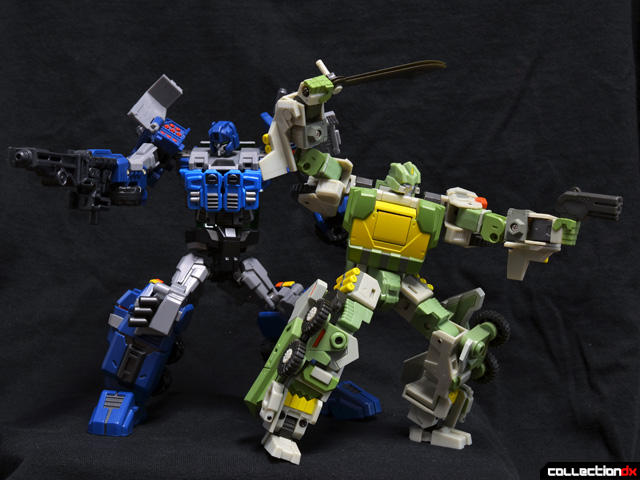 Steel Core also looks good next to his fellow Warbot.  Defender was a bit of a coup when he was first released, showing that third party companies could pull off complete original figures with complex transformations that still held together and were fun to play with.  Steel Core is a further advancement both in terms of detail and engineering.  Defender works, but is a bit fiddly and inconsistent in detail.  Steel Core is sharp, detailed, rugged, and intuitive. 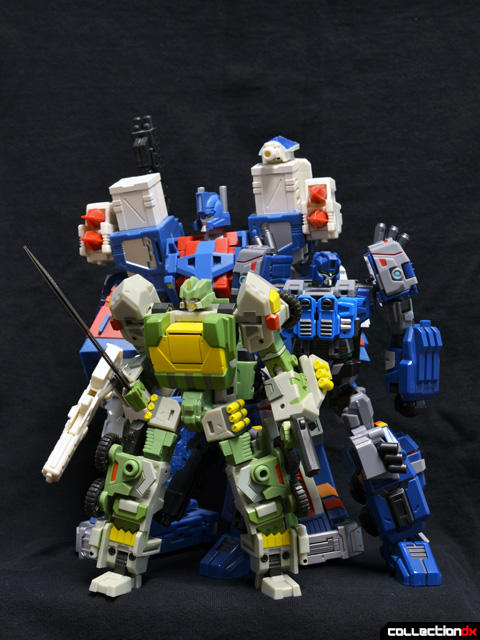 Comparing FP's latest toy to their first toy and first complete figure gives a sense of how far they've come.  City Commander is still impressive and really blew the third party market wide open, but Steel Core is in a whole other league of impressive.  Steel Core is available directly from FansProject on their new site, FansProject Core, for $79.99.  Collectors used to paying $15 or $20 a figure for Hasbro Transformers might balk, but I really think this is an eighty dollar figure.  The plastic quality is fantastic, the detail sharp, and the finish impeccable.  I cannot wait for what FP does next!

I was able to get 2 of them before they sold out on the site. I really enjoy this toy and they fact that it does not have any die cast on it really does not bother me. I can't wait for their take on Broadside.

Great review of an awesome looking toy. I love the shoulders and transforming gun.

That is one sexy robot. I'm kinda glad they're sold out. I might've ordered one.

There are so many wonderful Transformers out there that now a design either grabs me or it doesn't. Almost everything about this guy seems "right" to me. And I've never liked the Powermaster gimmick. (His chest also looks cool without Core attached.)

They knocked this one out of the park. Great review.

Well it seems like the Third Party system isn't going anywhere and thank god. These companies are pumping out so much superior product, albeit for a price, that i think it's really keeping alot collectors going in the face of rising production costs and cheaper official toys.

Plus if their willing to do GodMasters i would love to see some Headmasters.