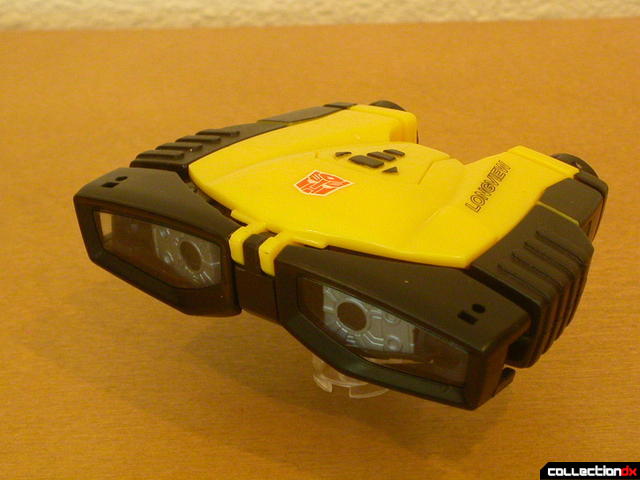 Longview’s disguise mode (back) is that of compact black and yellow camping binoculars. Right off the bat I’m going to say that while you can look through the small eyepieces, he is small enough (4 3/8”-wide x 2 5/8”-long / 8.5cm x 6.5cm) that average adult collectors just will not be able to look through both eyepieces at the same time. If you try to, he just sits quite nicely on the bridge of your nose, but you end up looking around him rather than through him! Looking at him from the front, there is some tech detail beneath the large lenses. On top, there are some molded buttons that are painted black. To the left of this is Longview’s name printed onto the yellow ABS plastic. The bottom of the binoculars is rather featureless, with black grip lines on both the outside and inside. In front of the buttons is a panel with the red Autobot symbol on it. This panel actually flips up 90-degrees to reveal a small display panel with additional molded controls, and a display screen (a pre-applied decal) showing a Decepticon vehicle speeding along a desert. Oddly, the decal is applied upside-down. Beneath the fold-up display panel is some more tech detail. Nice feature! 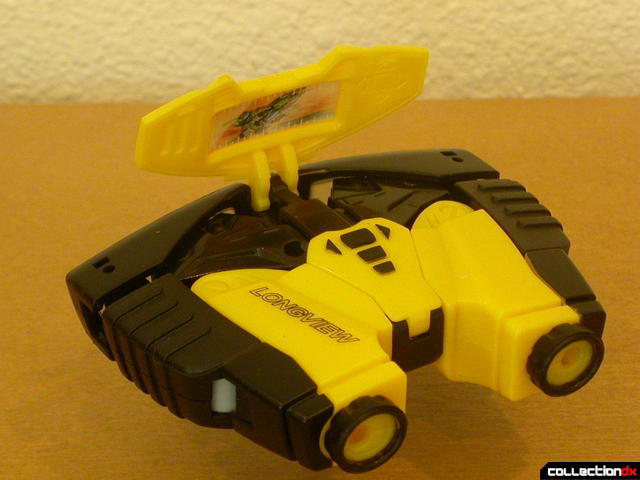 Transforming him is a piece of cake- very simple to understand, very simple to execute. The only complaint I have in the entire toy is in rotating those hands out of his lower arms! This is really the only place where his size works against him. While rotating them out isn’t the problem, it’s getting them started that’s the hard part! While tabs are provided for fingernails, they are just far enough away from the wrist joint that they make no difference! So you either end up using friction on the curved section, or you pry them open with something very small and pointed. Man, that really sucks! Since the Real Gear Robots line was inspired by events near the end of the 2007 film, but is not directly affected by it, and because of their relative size, there is no ‘Automorph Technology’ feature. No loss there. If anything, I don’t see how they could have incorporated one into Longview, and I think it was better for them not to try it. 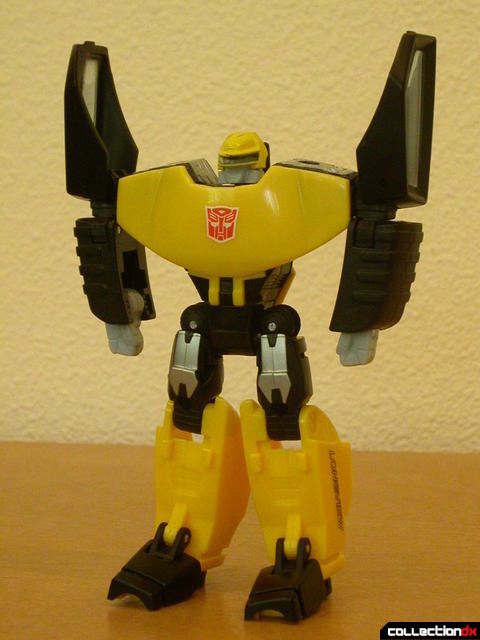 Longview’s robot mode (back) vaguely reminds me of a football player- rounded helmet with square visor over his eyes, wide upper torso (with the Autobot symbol right in the middle), narrow lower torso, and big wide lower legs and feet. His arms are a bit on the small side, but the binoculars’ front lenses rise up above them to add a bit of style. Poseability is good for a figure this size- with double joints in the hips, and single joints in the elbows, knees, and if you wish to move them, the feet. (Hips are a little loose on mine, though…) The head and shoulders use ball-and-socket joints. Because of how compact he needs to be in disguise mode, his elbows are very close to his shoulder joints, almost to the point of being inconsequential or nonexistent! The fists can bend inwards, but this is only because of his transformation. (If you’re like me, you don’t collapse those wrist joints unless you absolutely have to, as I explained above…) Whether this intentional or not, I cannot say, but the display panel from the binoculars is easily accessible on the chest. So, in robot mode, the display is right side up- when looking at Longview’s open chest, the image faces towards you. This, perhaps, is why it is upside-down in disguise mode… (For those of you keeping count, that is Voyager-class Decepticon Crumplezone from the 2006 “Transformers: Cybertron” line, with his Planet Key feature activated.) Simple and fun. That is the mission of the Real Gear Robots line, and this toy accomplishes this very well. Plus he looks good, and changes easily. Things to change? Only one- move those tiny tabs closer to the wrist joint. Perhaps he could have been bigger, to fit an adult collector’s hands (and face) better, but I think that Longview does just fine the way he is. Highly recommended! 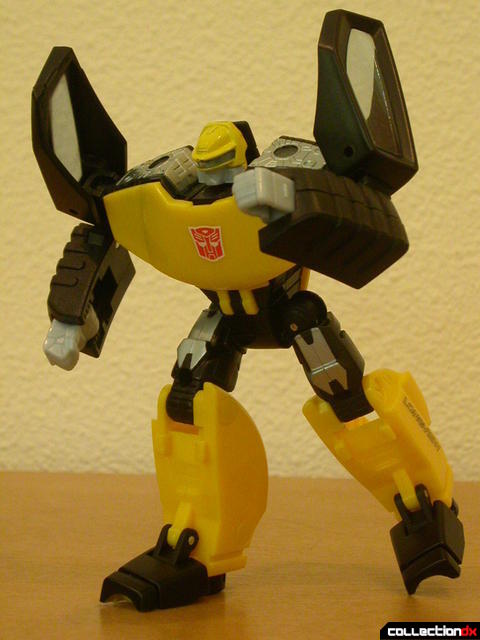 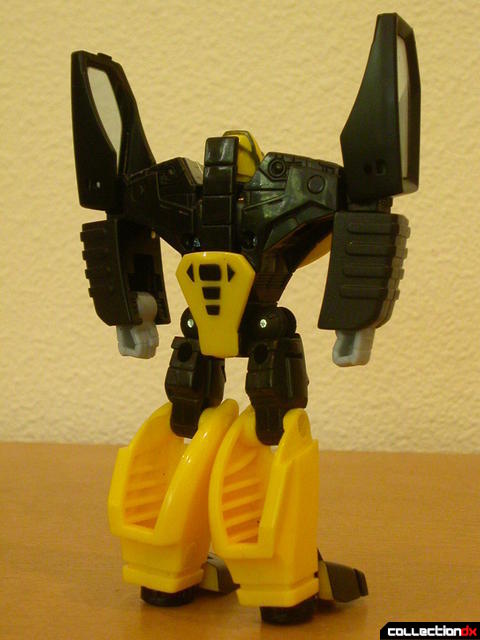 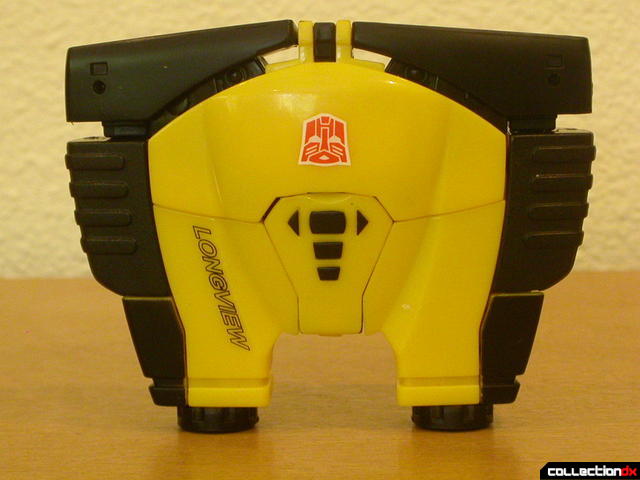 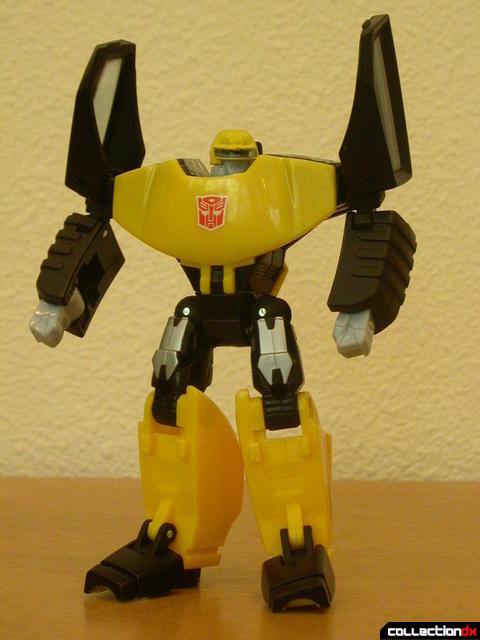 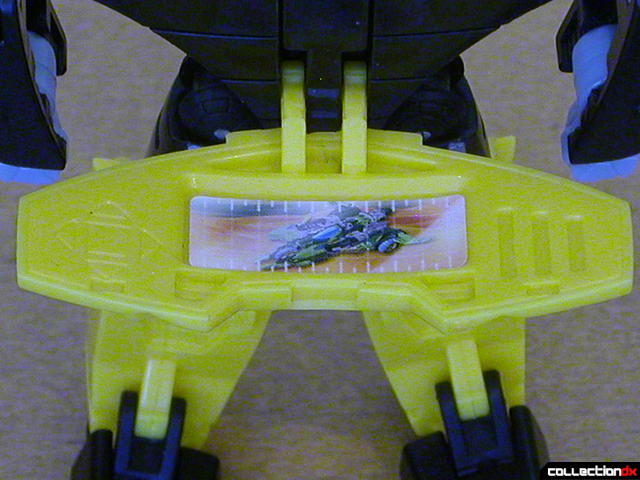 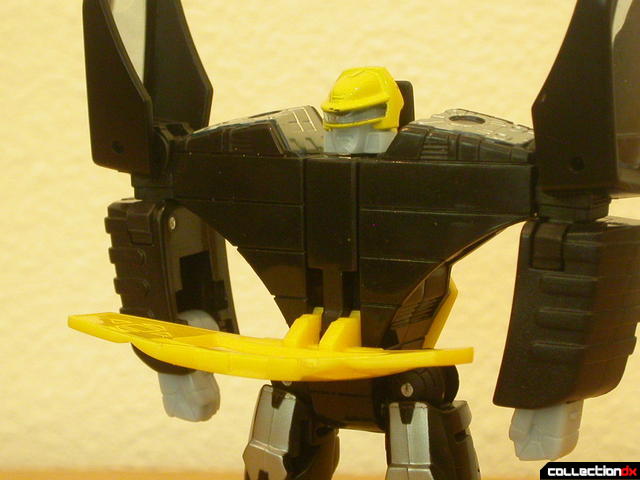 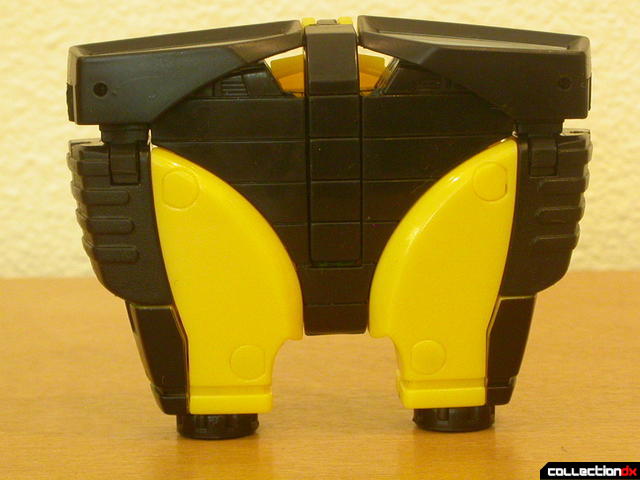 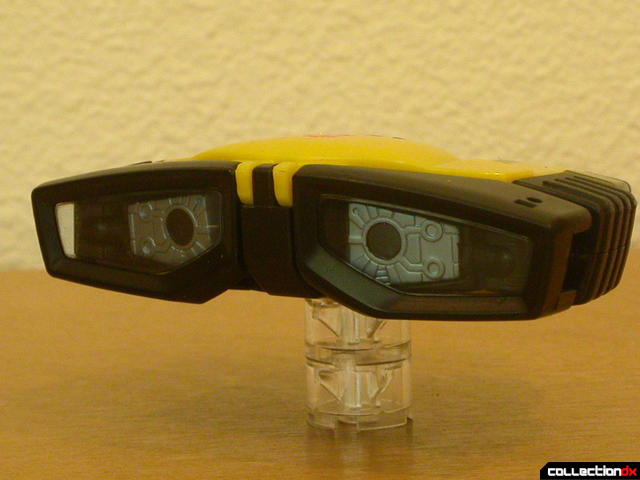 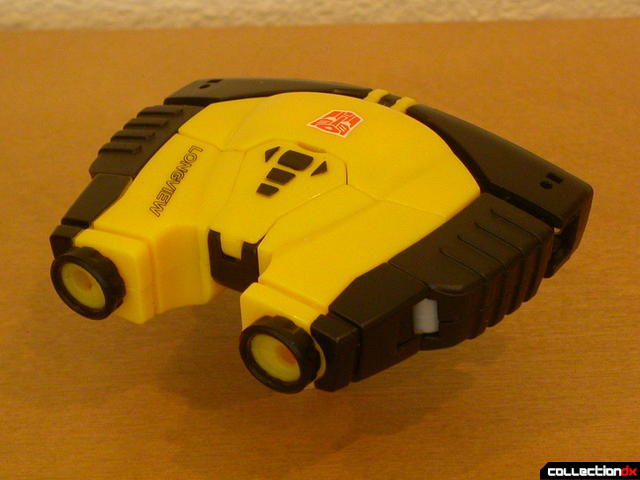 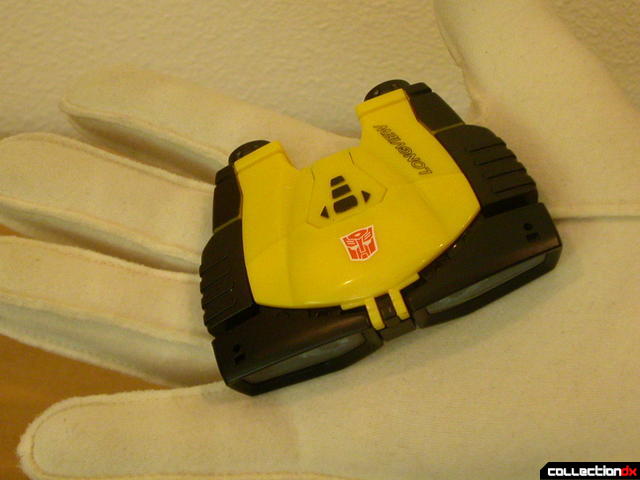 5 comments posted
I think if he were bigger he

I think if he were bigger he would have to have been sold at a higher price point.

They are on the right track, getting back to the concept of Microchange's "Everyday things transforming into robots", but still, I have never seen Binoculars that look like this.

Dan Moroboshi called. He wants his Ultra Eye back.

"Dan Moroboshi called. He wants his Ultra Eye back."

JoshB, I know that making him bigger would increase the price. These are supposed to be cheap, easy-to-use toys. If it had been a $10 instead of a $7 toy, that would have been nice. But I'm not complaining at all! If I didn't like what I'd seen of Longview before I got him, I wouldn't have spent the money at all. (Nowadays, I don't get something just because it's part of a series/line; there are many intentional gaps in my collection that I do not wish to fill.)
.
As far as his disguise mode, I just called them "camping binoculars", but I added the "camping" part because it sounded better and made more sense for binoculars to be smaller/more compact that way. As for the lens' shape... I don't know.
------------------------------
CollectionDX Staff

...
Honestly, at first, I thought you were crazy...then I actually looked at the shape of the lenses! Good call, dude!

EVA, you seriously don't know what SpaceRunaway's talking about...?

"EVA, you seriously don't know what SpaceRunaway's talking about...?"

(looks up Dan Moroboshi on Wikipedia)

Oh... Well, I'm more of a Super Sentai fan than an Ultraman fan, so I wouldn't know that off the top of my head.

(*snickers*) Actually, now that I think about it, that is kinda funny.