Mighty Morphin Power Rangers is the show that pulled Tokusatsu out of obscurity in America and really swept the nation unlike any other show before. As testament to the strength of the license, Bandai is celebrating the 20th Anniversary this year with a whole slew of new products to whet the appetite of those bitten with the nostalgia bug. Enter the LEGACY MEGAZORD!

We all know the story of the Mighty Morphin Power Rangers by now, so I'm not going to rehash the "Alpha, Rita's escaped! Recruit a team of teenagers with attitudes!" scene that has become ingrained into the thought processes of people my age. I will say that when the monster of the week grows to a ginormous size, the only thing to do is to call upon the power of the MEGAZORD! WE NEED DINOZORD POWER NOW!

To hear me rant about this guy for 10 minutes, please watch the video review.

This release is basically the 2010 version of the Megazord, except certain parts have been enhanced with diecast metal and better paint applications have been applied. I'll go into detail about the placement of diecast when talking about each Zord during this assessment. 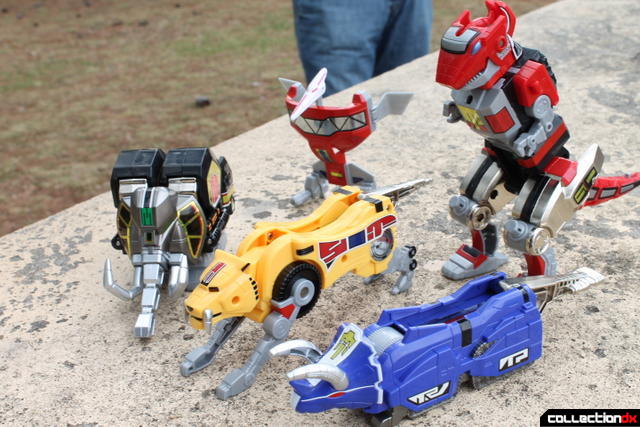 Each of the five Dino Zords are represented here, and look great to boot! I was rather pleased about how they each turned out. 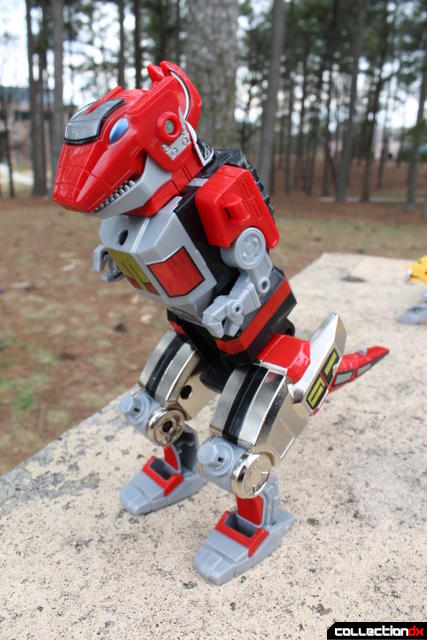 The Tyrannosaurus Zord looks great. The stickers are metallic and add a certain charm to this particular Zord. Articulation is rather limited since this is a transforming Power Rangers robot, but that's to be expected here. 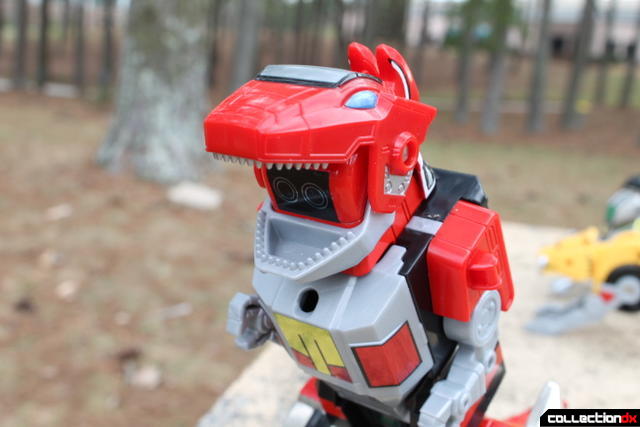 The important thing is that you can open the T-Rex's mouth to reveal his laser cannons. There's something very charming about the cannons being a sticker. I don't know, maybe it's just my nostalgia. Anyway, diecast on this guy is limited to his thighs. 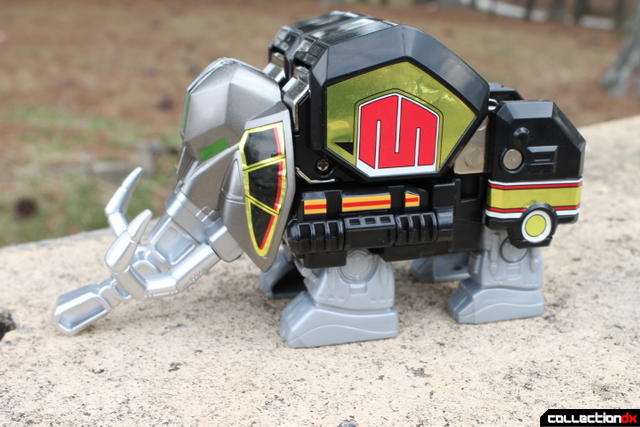 Next up is the Mastodon Zord! He is a very lovely chunk of plastic and metal. The stickers look great on him, and he looks spot-on to his depiction in the show. Most of this guy is diecast because he becomes the arms of the Megazord. 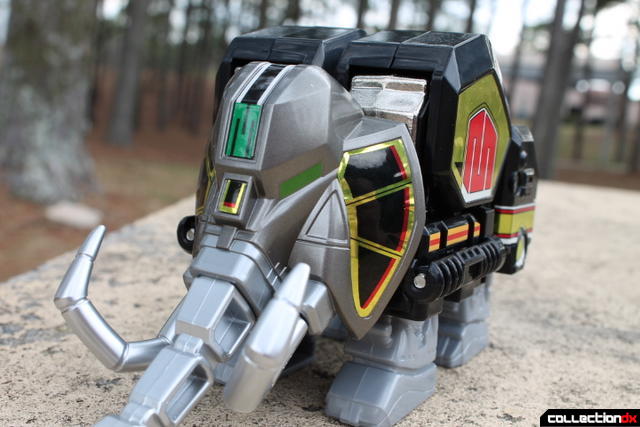 I was a little disappointed that his head was made of plastic instead of diecast, but I've come to accept it because his head becomes the shield later on. The diecast would add a lot of weight to it and could mess up the center of gravity, thus making it topple over easier. Anyway, I'm really happy that his head is grey instead of black. This adds to the nostalgia since the original toy had a grey head. 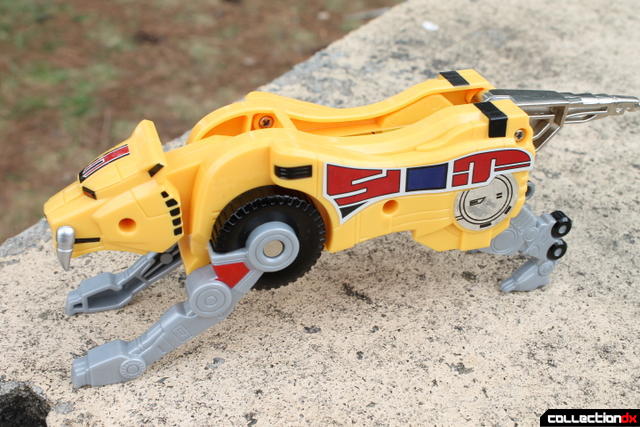 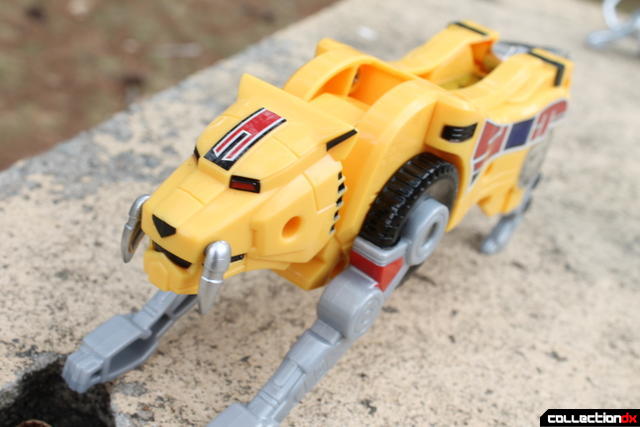 The Saber-Tooth Tiger Zord is alright. The stickers and paint apps are decent, but not mind-blowing. It does what it needs to and nothing more. I can respect it for that. I was really disappointed at the amount of diecast on this one, since only the tail is made of metal. I really wanted the head to be made out of metal. This would have made the combined form even more stable. 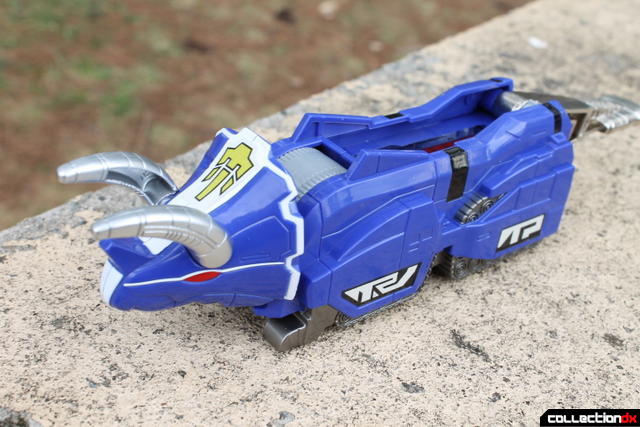 Alright, the Triceratops Zord is up next. It provides the same function as the Saber-Tooth Tiger so they are very similar. The paint apps and stickers are decent, and only the tail is diecast. The same disappointment I had with the Saber-Tooth Tiger is present here. I really wish they would have incorporated more diecast into him. 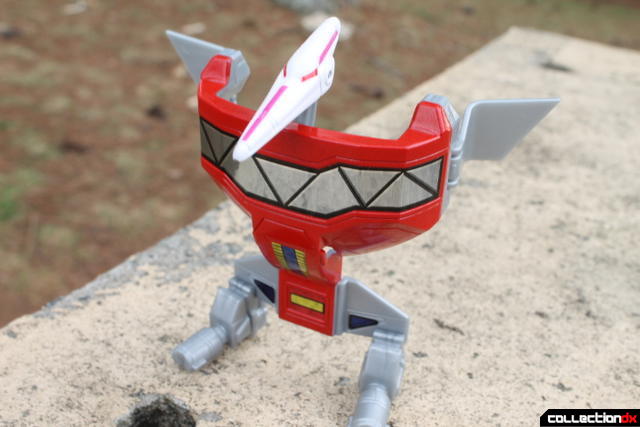 Last up is the Pterodactyl Zord. There's never much going on with this Zord, no matter what version you're looking at. Its primary purpose is to become the chest piece and it shows. It's not really the toy's fault at all. The Pterodactyl Zord has always been my least favorite, even in the show. They did, however, do a great job painting the head. I can tell they tried to make it look interesting. There's no diecast on this one.

*edit* It turns out that the head on the Pterodactyl is actually diecast! Thanks to Megatroptimus for the catch! 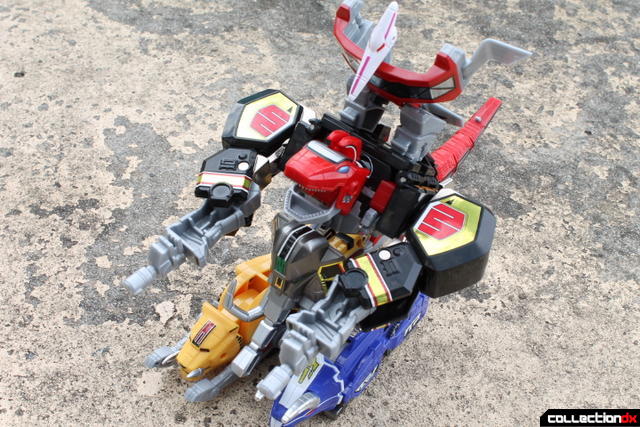 So, once we have all the pieces together we can combine them! Before you initiate Megazord sequence, you must ALWAYS go into TANK MODE! It's a rule. Transformation is simple, yet effective. 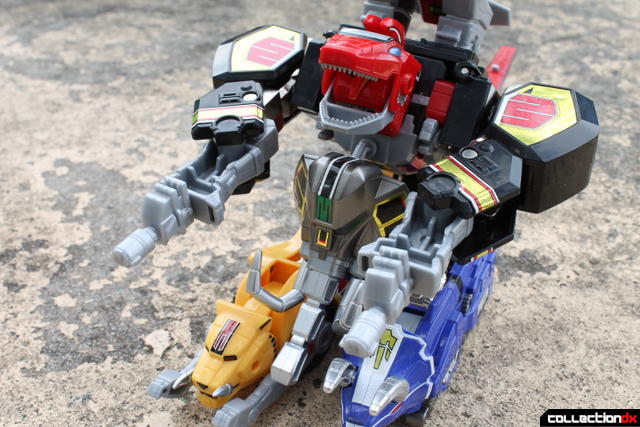 The tank mode looks like it jumped straight out of the television and onto the park bench where I took these photos. I always appreciate it when a Megazord toy can achieve this form. It just melts my heart! 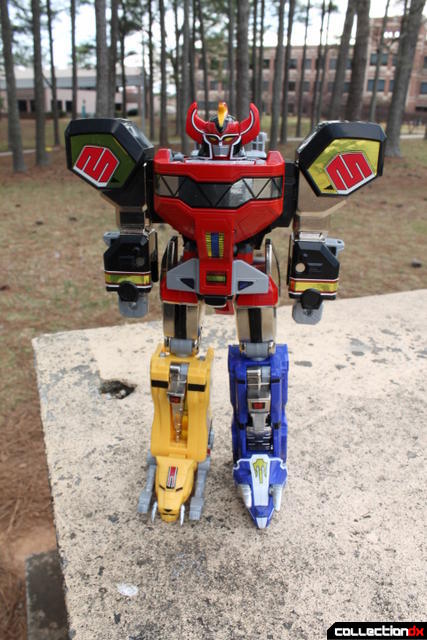 After combining into tank mode, it's finally safe to transform the rest of the way into the Megazord! I must say, I am very pleased with how this guy turned out! 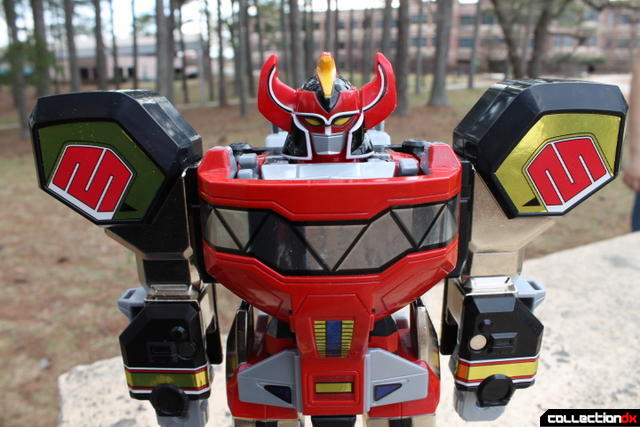 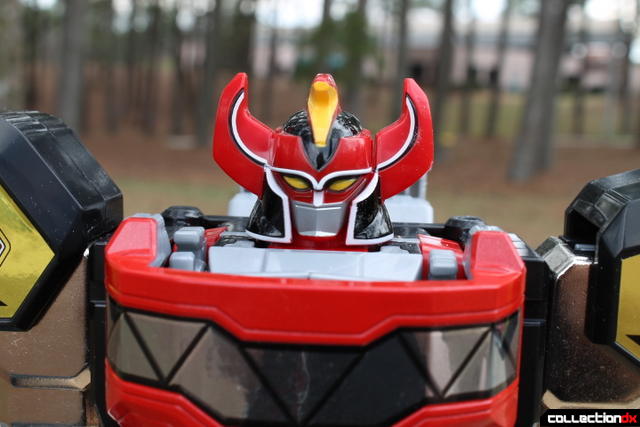 His paint apps are excellent and the metallic stickers really help pull the whole thing together! Seriously, his head looks AMAZING. This is the best looking DX Megazord I've seen in quite a while. The diecast content is not as large as I was expecting, but it's effective. Since the thighs, arms, and sections of the legs are diecast it helps give him some extra weight, but I can't help but feel like it's missing something. 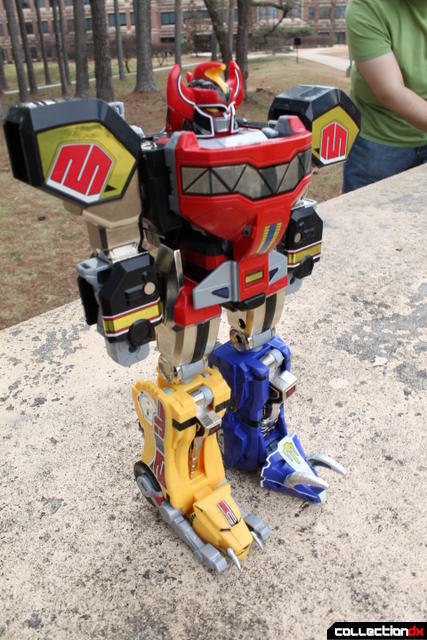 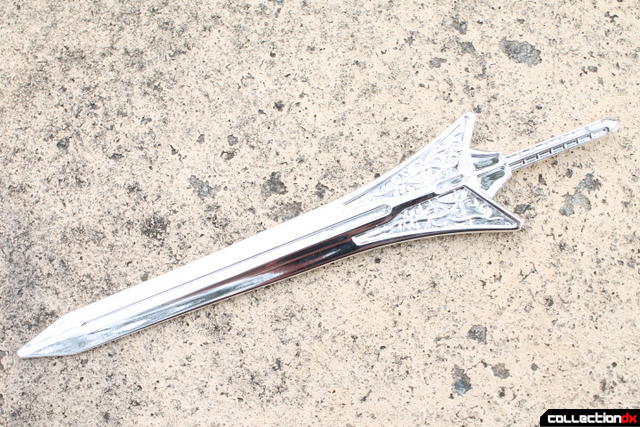 This brings me to the single biggest problem with this set: the accessories. The Mastodon Shield is fine and looks great. I have no problems with it whatsoever. The problem is the Power Sword. It was dipped in chrome paint, which looks great, but added to the circumference of the handle. This means the handle can barely fit in the hand of the Megazord. I had to CRAM the sword in just so the Megazord would hold it. This is absolutely terrifying because the sword feels like it will break any second, and the paint is ALREADY wearing off on the handle. The sword is the biggest let-down of the entire release. This problem alone will make some pass on the set. I can't help but think that there could have been a better solution out there. I'm alright with the sword not being diecast since it would have basically become a small knife, but the handle being the wrong size is just disgraceful. 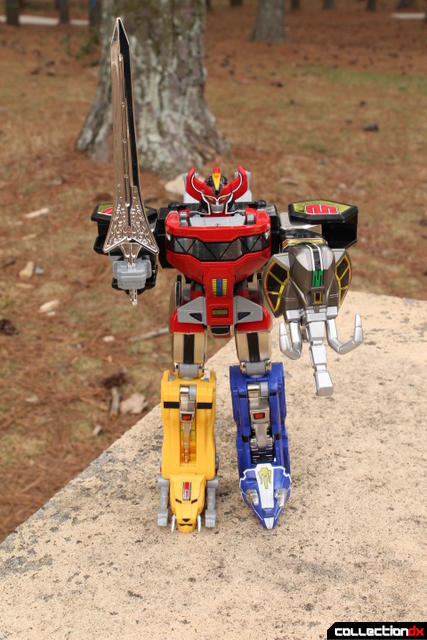 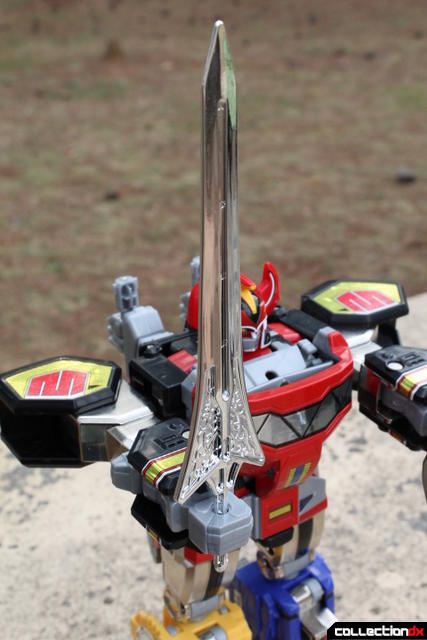 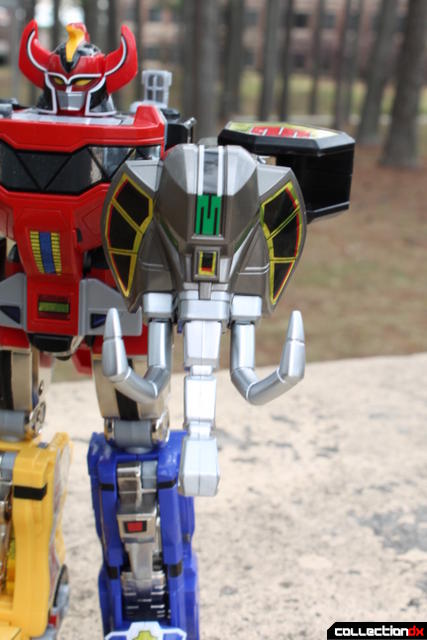 Overall, this is the best transforming version of the Megazord that I've seen. The paint apps are excellent, and the diecast adds some great heft to the entire package. If you are afraid that the sword may break on you, however, then you might want to give this set a pass, especially if you already own the 2010 version of the Megazord. I think it was a great idea to release a version of the original Megazord for the 20th Anniversary, even though the execution was a little shaky. The one thing that would make this release really worthwhile is if they release a DRAGONZORD to go with it. Please, Bandai, I REALLY want a new Dragonzord. Pretty please? 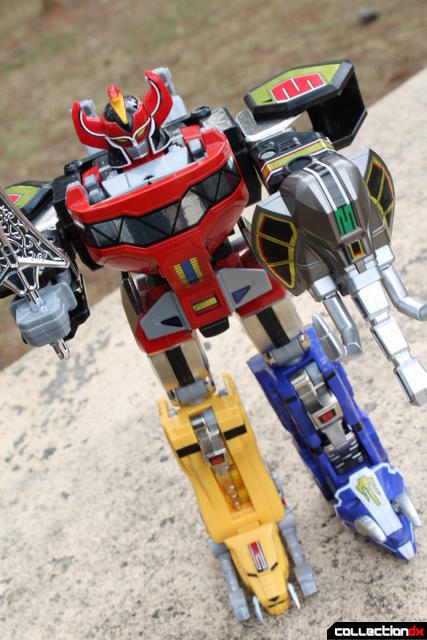 17 comments posted
Yeah, we really do need a new

Yeah, we really do need a new Dragonzord to go with this, with its own die-cast parts as well.

I noticed in your video review and I see it in the last couple of photos, but is there something loose in the right shoulder armor?

Yeah. I just kept knocking it down without realizing it. It's actually not loose.

Although i'm not a huge MMPR or Sentai fan (just a giant robot fan of any sort), I'm glad I was able to find this at my local TRU. That in and of it's self is a miracle since they they don't ever seem to get anything. (i.e. Transformers Masterpiece)

I felt the quality is exceptional on the Dino Megazord. My only complaint is the way the legs attach. I hate the knee-nipples! That seems to be the weak link imo.

The head is actually die-cast on that one. So all the figures have die-cast. Got my set a couple days ago on sale at 25% at my local TRU and I don't regret it. I've never had the original, but this one looks great. I'll eventually hunt down the original to combine it with Dragonzord and Titanus and benefit from the rolling wheels and all.

HOLY CRAP INDEED! I didn't even catch that and I was LOOKING for diecast! Thanks a lot! I'm adding that right now!

Mine just arrived today and it is awesome. There is something really great about this big heavy brick of plastic and metal with like....two actual points of articulation. I also love the clicky shoulders and how they give you only about 4 positions for the arms.

It's just a special kind of awesome that many of my toys don't have.

Dudes, the reprolabels for this set is totally rad!!!!! It just adds that extra level of detail that brings this up to Chogokin level in my book. Or purtnear close! Once I lock down taking quality photos that are up to CDX quality, I'll post my picks of just how awesome and amazing a job Reprolabels did with these robots. OMG. They totally rescued the pterodactyl. RESCUED it with that chest plate that create the impression of further bringing out the molded in details on the figure. Really, really cool, so def check it out. I'm talking 3 sheets of reprogoodness. An OCDream come true.

You can ship it parcel or whatever is cheapest. I take paypal. Thanks

If anyone still has these at their stores, I want one. Help a fellow CDX'er out. :D

BBTS is offering them again, but they're 125$ USD now.

As the Transformers Titanium Series proved, metal parts do not magically improve a toy's quality. The Triceratops tail is metal? Whoop-de-smegging-doo, that doesn't actually improve anything. What would have improved things is retooling the tail so that the cannons were a separate piece like on the original toy so that they could be aimed. All a die-cast tail does is make it harder to kitbash that functionality in.

"The tank mode looks like it jumped straight out of the television and onto the park bench where I took these photos."
No, no it doesn't, because you transformed it wrong. The shoulder armor is supposed to be open like it is for the battle mode.