Although I was very young at the time, I have vague recollections of the do-it-yourself craft craze of the 1970s. It seemed everyone was making plaster casts of things or making ceramic knick-knacks. I suspect that every house had it's own paint set. I know that my mom took ceramic classes and for many years we had a cool jack-o'-lantern statue that she made always turning up around the house around Halloween time. Of course, now that I'd love to take it and put it in my collection, I can't find it!

Which leads me to the events of 2012, when I finally decided that my monster collection was missing this one key component. There are a great many vintage monster statues out there and I'd always been envious of other collectors who had them. I had to do something about it. In a classic case of good news/bad news, I managed to get not only my first statue this year, but my first TEN! While it was great to add so many of them to my collection, it really set me back financially this past summer. 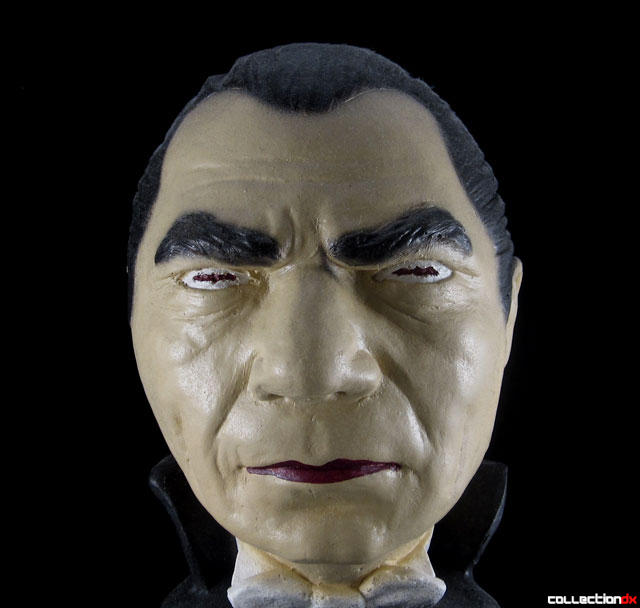 Probably the most famous and most prolific statue maker is ESCO (Entertainment Statue COmpany). For over 30 years they made a multitude of statues of people and characters every source, including movies, music, politics, television, etc. Naturally, I am most drawn toward their line of monsters, but these ones in particular are also very popular with people who collect just ESCO and not necessarily monsters. 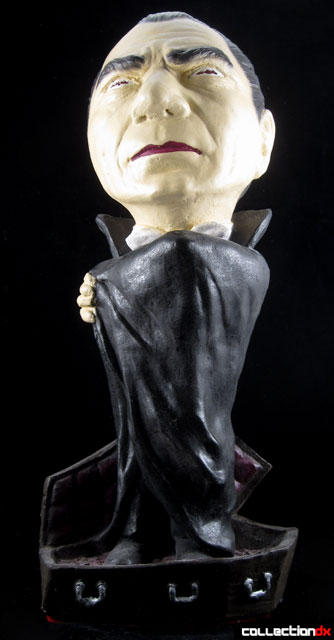 The way he is curling his cape across his chest is a classic pose and I love the decision to have him standing up inside of his coffin. But perhaps best of all is that he has bats in his eyes! 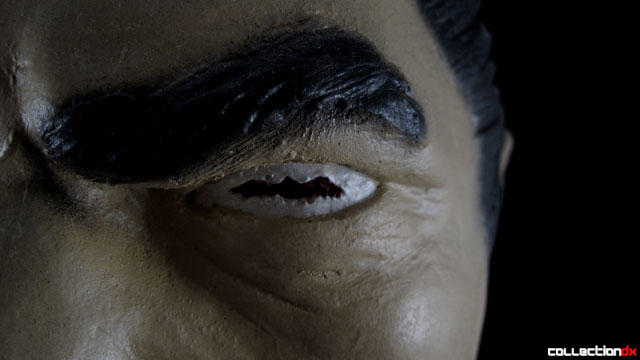 This statue checks in at about 16.5" tall and weighs about 10 lbs. I've heard these described as chalkware, plaster, and resin in the past and frankly I have no idea how to tell all those materials apart from one another so for our data field above, I went with resin since it is what is listed on the official ESCO site. However, I suspect that they may have changed the material they used in later years. 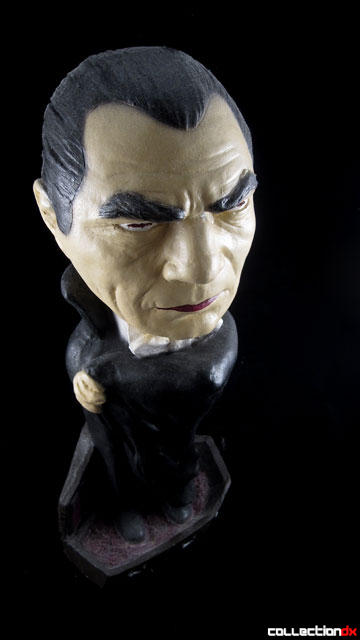 Besides just being familiar with the style, the best way to differentiate an Esco statue from other brands is the markings on the based. Dracula has "ESCO" etched into the back of the coffin.

I suspect that the average CollectionDX reader will not be too terribly excited about these statues, but not only do I want to review them because I love them myself, but I feel that they should be a part of our database since they are a popular collectible item and have a significant place in collectible history. Since I realize that reviews of static pose statues will necessarily lack pizzazz, combined with the fact that I want to do them and move onto other things, however, I've decided to publish ALL TEN of the statues I have in my collection at once!

To view the others, simply mouse over to the "ESCO" link in the datafield above. Clicking that will bring you to the ESCO review page where all can be seen. Or if you prefer, simply pick from the links below to check out the character you are most interested in.

Unfortunately, at this time I am still missing several key pieces in the line, such as the Bride Of Frankenstein, The Hunchback of Notre Dame and Alfred Hitchcock, but if I should come into possession of them, I'll probably add the reviews and promote them to the front page as usual.

2 comments posted
I think that my uncle

I think that my uncle collects these statues, the size and style are spot on. Sadly, no monsters, but he has the Beatles, Marx brothers, Three Stooges, Honeymooners, and several others. In all I think he has 20 to 30 of them. Thanks for review, I never knew that they were called.

Yeah, Esco made all those characters. The Marx Bros ones in particular are really nice, imo (especially if you can get Groucho's glasses) and I'd been tempted to grab them on occasion but I don't really want to veer too far away from my focus. I'm glad someone recognized them though! If I had the skill to do so, I would totally sculpt Esco style Mazinger Z and Garada K7 statues. :)