When Tommy Oliver came to Angel Grove, Rita Repulsa saw an opportunity do destroy the Power Rangers, turned him into the Evil Green Ranger and gave him the mighty Green Dragonzord. Once the spell broken, Tommy joined the Power Rangers and added his Dragonzord to their armada.

Included in this box:

This toy is just plain fun. Lot of actions, light and sounds. What could possibly be better? Well had the mastodon, the sabre-toothed tiger and the triceratops and you will understand. That combination is called “Dragonzord Battle Mode”. And it rocks. The tails and chest combine with the stand (that was useless before) to become the “Power Drill”. The combination is, of course, even bigger than the Dragonzord on his “Dragon” mode. Finally, if you have the complete Megazord, the Dragonzord can be put on the shoulder to form the huge Megadragonzord. Of course, the light and sounds are still there. And finally, put the Megadragonzord into Titanus to have the enormous Ultrazord, with more light and sounds and motor actions.

Finally, the Dragonzord is one of my favourite Zord. It’s always fun to combine it with the Megazord and to use the light and sounds. And the 8” Green Ranger is a great addition for a good value pack. 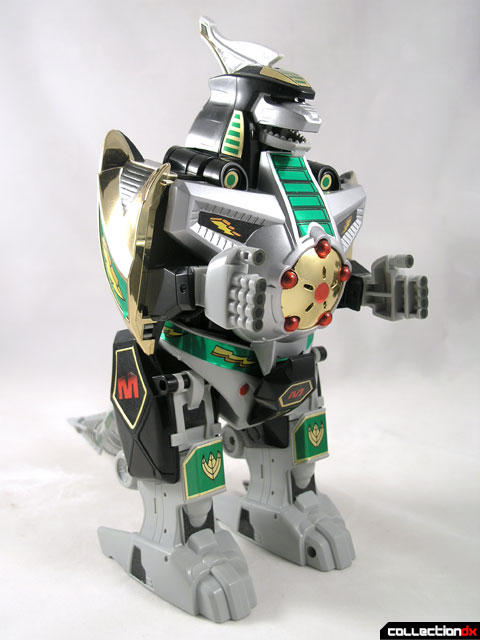 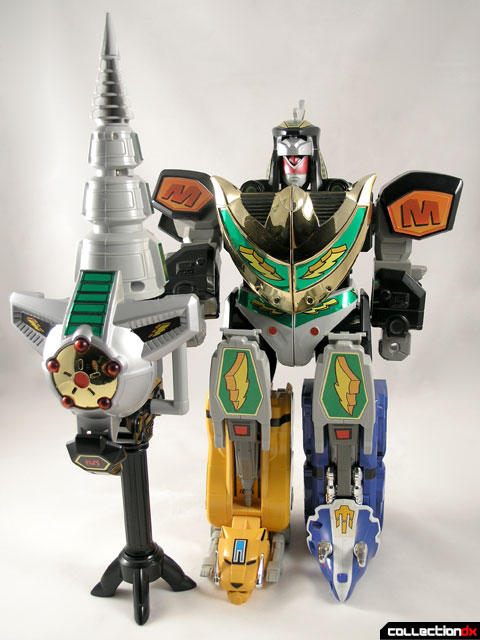 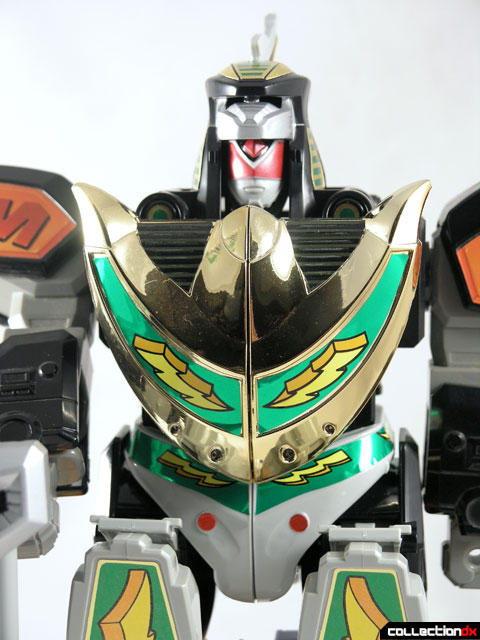 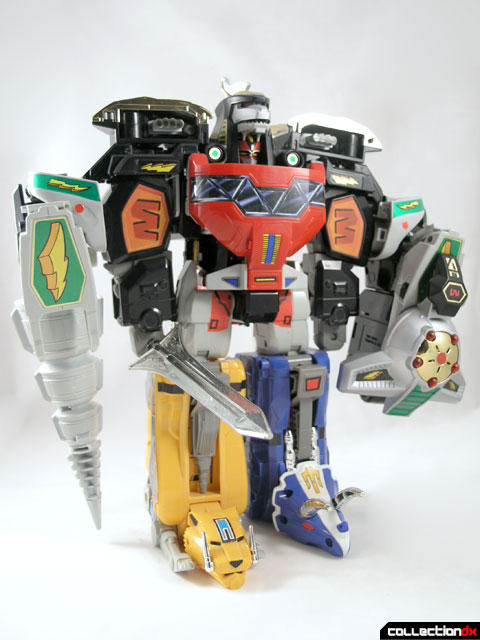 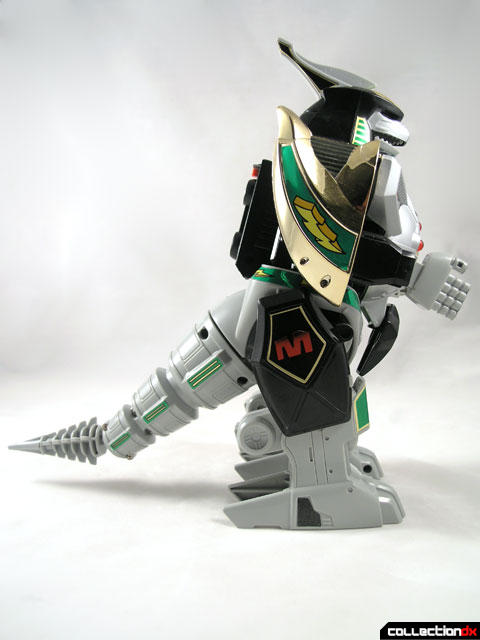 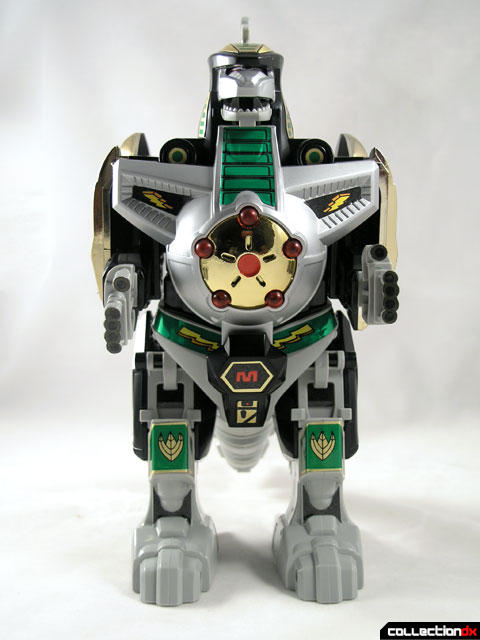 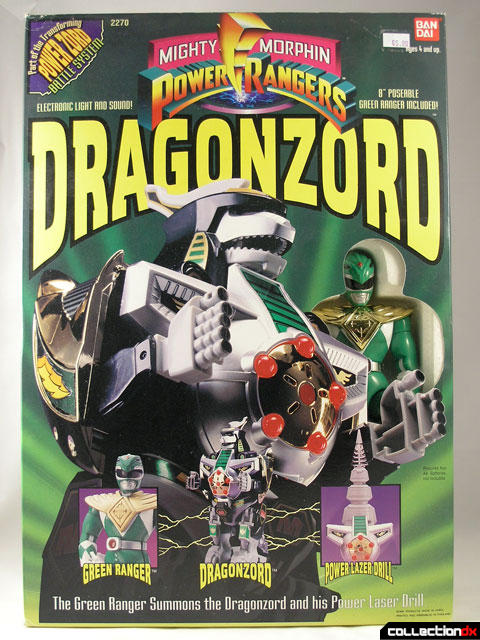 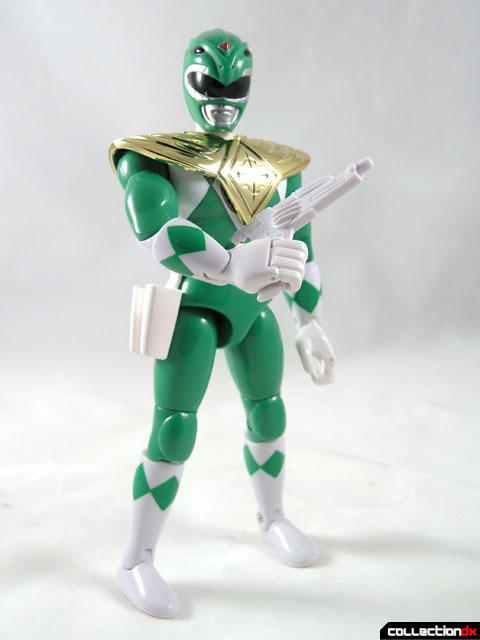 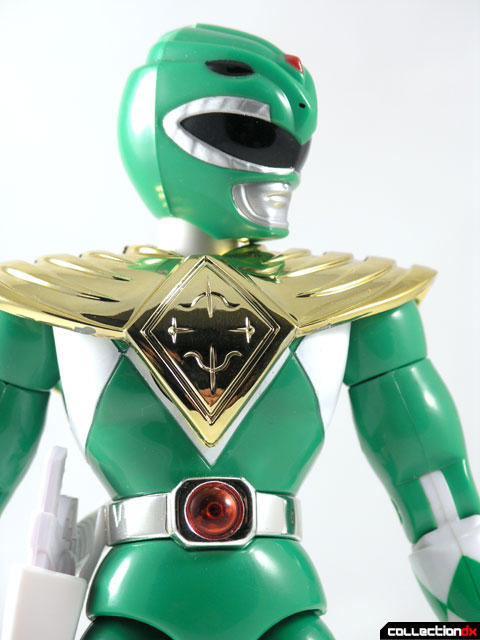 I really dislike what Bandai America did with the stickers back in those days, with all the horrible lightning bolts all over the place.

At least we have Reprolabels. If it didn't cost $50 to do so, I would re-do the stickers on my entire Ultrazord.

Bandai were idiots for not doing a new version for the MMPR 2010 line. They barely even acknowledged the Dragonzord's existence.

Given the chance, I might repro-label Titanus just because it looks a lot more exotic as King Brachion. At most, I would just want to eliminate the lightning bolts on the Dragonzord.

"I really dislike what Bandai America did with the stickers back in those days, with all the horrible lightning bolts all over the place."

Very true, although at least the toys were 99% identical to the Japanese versions back then. Today they're totally new and cheaply done versions which makes me glad I dropped out of collection PR robots.

Love your video reviews Eva_Unit_4A. Your mention of the mirage from silver hawks really made me miss my own, haven't seen that thing in years and will probably start looking for it. I also thought i should mention that included on the survey that was posted a few months ago about what the fans would like to see in the new power rangers series there was a question asking which was my favorite Zord, and even though there were probably over 10 of them, i was very upset to see that the dragon zord was nowhere on that list. It was also my favorite and my fondest memory is of the episode when the White ranger goes up against the green ranger and the Dragon zord makes a grand return to inflect some mayhem and monster destruction !

Thank you for the compliment!

Nowadays I barely remember "Silverhawks", but I do remember that I liked it a lot. I had the lead guy, the brass-colored android, the cowboy, the gold native American guy, the Breetai-wannabe, and a few of the villains. Oh, and I totally have the 1/1-scale Tally Hawk which hangs in my closet to this day. Beyond that, I don't remember much about it.

It would have been nice to have the Dragonzord have a proper send off. The current fan theory is that the Dragonzord draws its power from the Green Ranger Coin, and because it no longer has power, the Power Zord is STILL slumbering beneath the waters next to Angel Grove, waiting for a day to awaken once more that will never come.

Forgot to mention that the first wave of the Dragonzord had the diecast tale tip.but all and all great Review, better then my review I have to say.

Mega Dragonzord didnt really fight much. They mostly used Dragon Zord Battle Mode or Ultrazord. I think the Mega Dragonzord costume was too combuersome. when it WAS used it basically just shot a giant energy bomb at the monsters.

Was the footage of the Zutei Daizyujin just that limited as well, or was it limited only in MMPR?

It was a problem with Zyuranger itself. In the show Juutei Daizyujin is most seen as part of Kyuukoku Daizyujin. I was disappointed myself after sifting through Zyuranger and finding that its appearance was so limited.

Even though I've heard a lot of negativity about it, I'd still like to see the first few subbed episodes of "ZyuRanger", just to see it.

I cant say its bad. Just not that noteworthy a series. I do like that Daizyujin is sentient and I like the Dragon Ceasar focused episode late into the series. I'll always like the series (both Zyuranger and MMPR) due to nostalgia though.

My main concern with the toy is that the 'mantle' piece that Dragonzord forms doesnt sit on the Megazord very well. The helmet part seems to push up on mine and the Dragonzord legs seem to hand off at a slight angle. Made worse if I attach the Dragon chest and drill. I do agree that grey handle pice was rather stupid. There should've been a flip out handle or something on the back of the Dragonzord chest part. The handle is way too easy to lose and is infact hard to find on loose/used ones. I just stick it in the Titanus and never take it out.

Btw the reason the cannons arent part of the Dragonzord 'Fighting' mode is because they are part of the Pteradactyl.

Now to get me some repro labels so that they can look closer to the TV version. Only problem is getting all the repro labels will cost me the same as how much I payed for all 7...

I've seen the first few eps along with the last four of Zyuranger.