Following on the heels of Darth Vader, Kaiyodo has released the classic Star Wars Stormtrooper as the second entry in their Star Wars REVO line.

The toy comes packaged in a box measuring 8.5" x 8.5" x 2.5" with a clear window on the front. The back of the box features details about the figure and pictures of some of the more striking poses the figure is capable of. 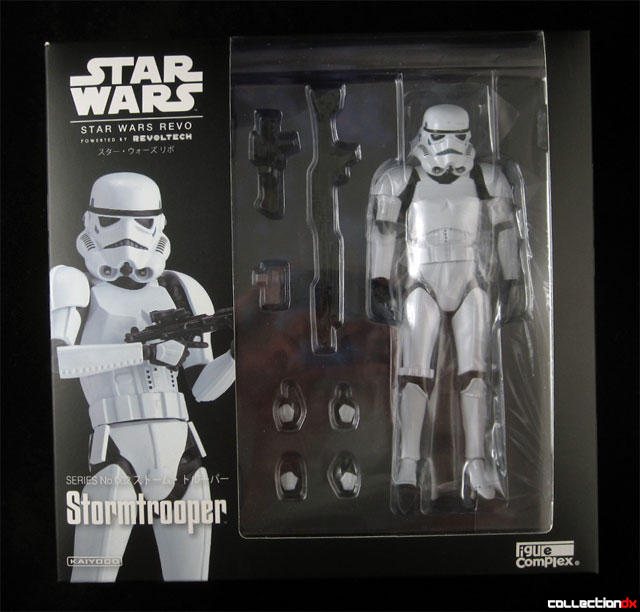 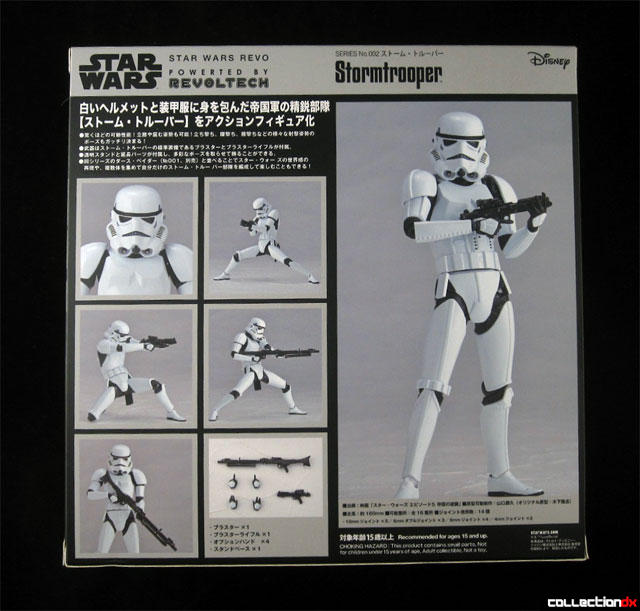 The figure itself, along with its accessories ( including six hands; 2 closed fist, 2 open palm, 2 with trigger figure extended), rests in a clear 2-part plastic tray. 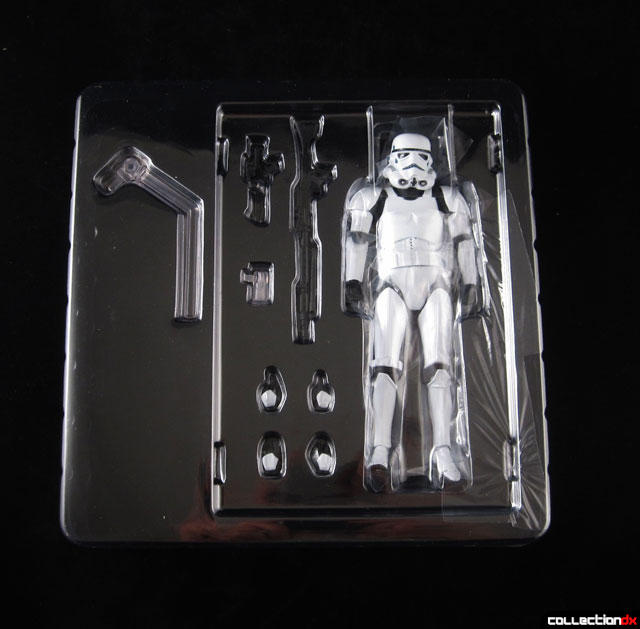 When you remove the figure from the tray, you'll find that there are small pieces of plastic embedded within the joints of the figures which need to be removed. 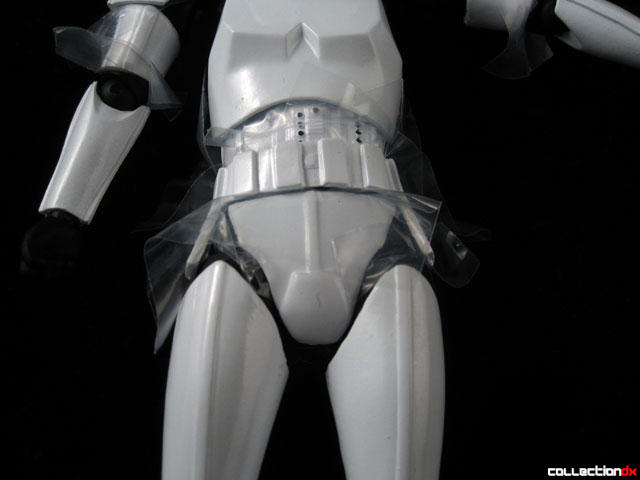 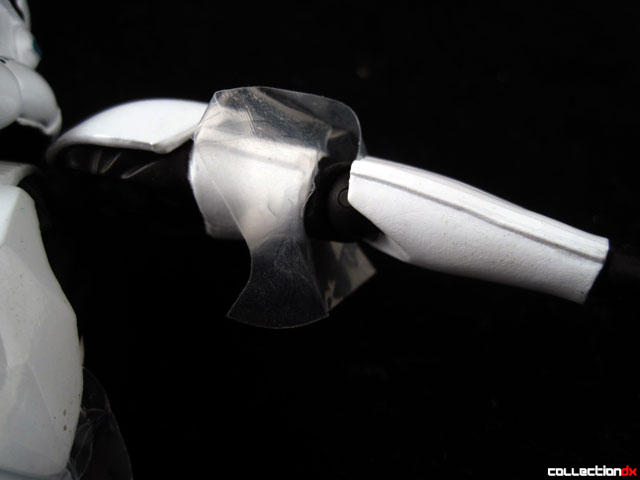 Among its included accessories is a partial stand and tab to connect the figure to the stand. I'm not sure why, but there is no base included to attach the stand to. Perhaps it was omitted from the box somehow but I don't see any place it would have been stored. To actually pose the figure, I was forced to borrow the stand that came with the figma Flyboy Zombie. Fortunately, it was more or less compatible. 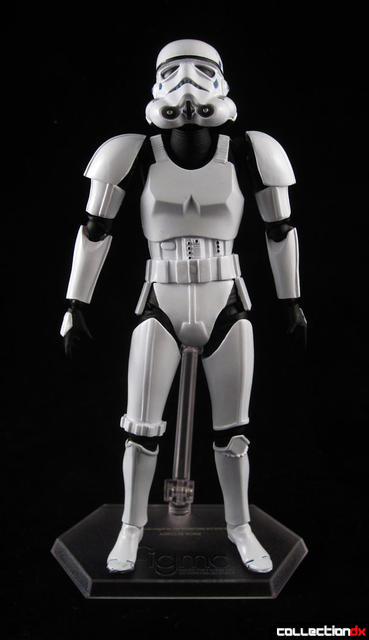 Sculpting on the figure is excellent but there were a couple of blemishes in the paint on the helmet. There is a small scuff in the black band around the head as well as a smudge on the left temple. You really only see these on close inspection though and the figure looks fine from a few feet away. 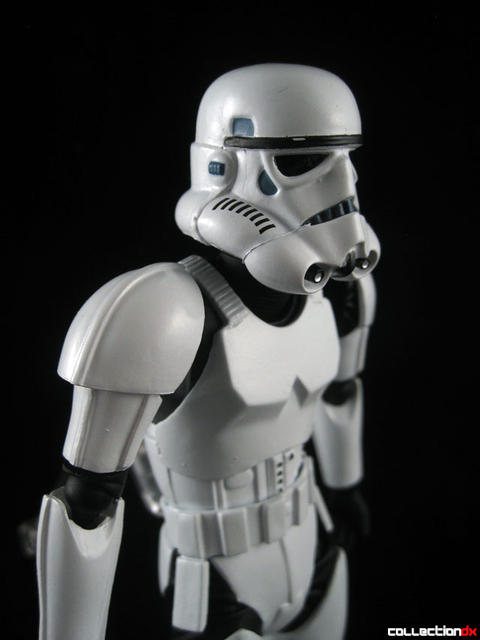 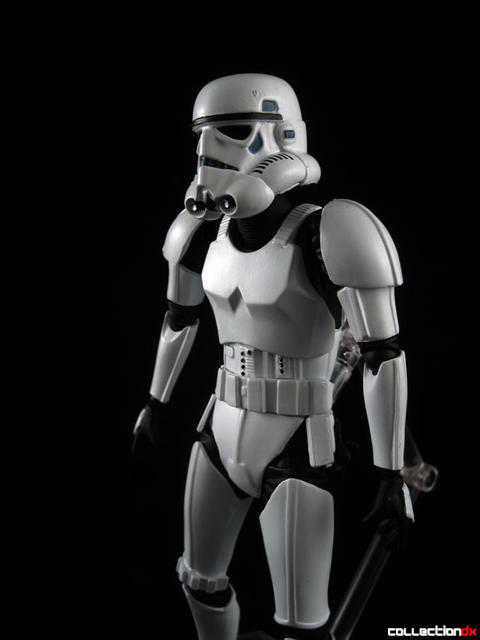 Among the accessories that were in the box are two weapons; a blaster and blaster rifle. 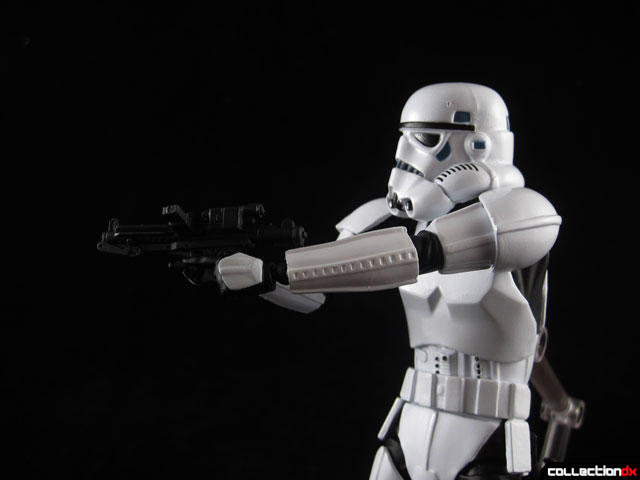 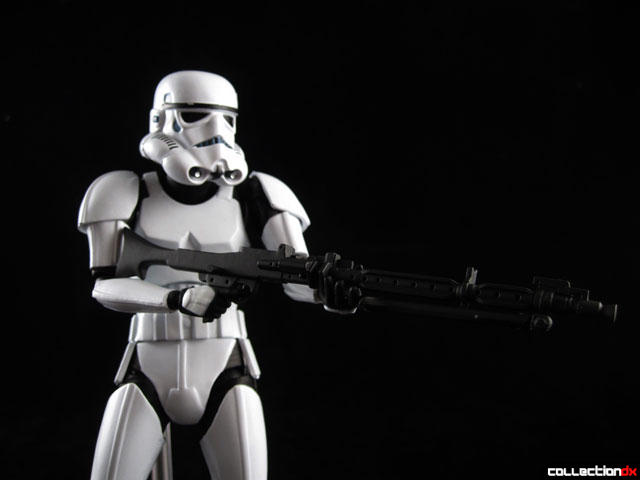 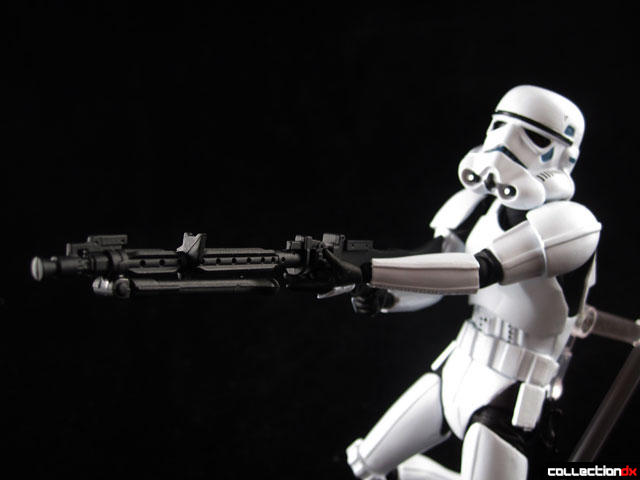 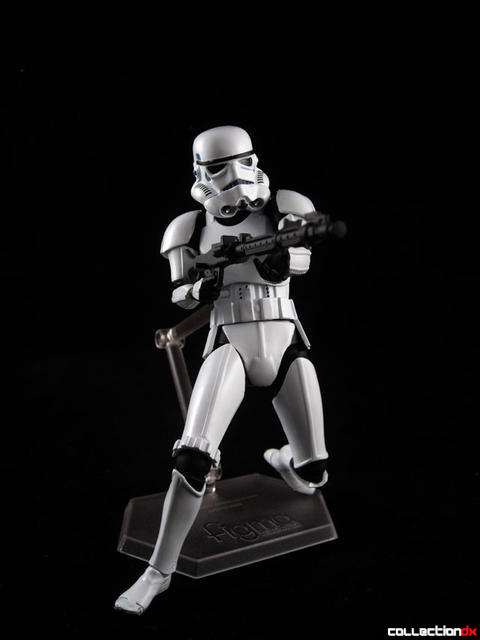 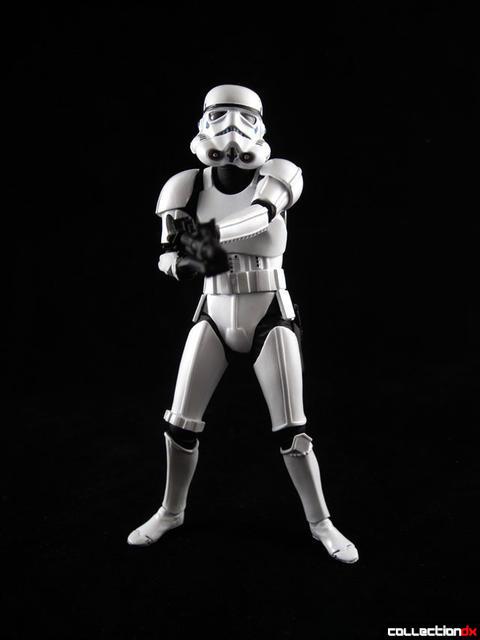 The Stormtrooper features revoltech joints at the waist, wrists, knees, and ankles with double joints on the neck and shoulders. The toes feature a more traditional joint. People with greater imagination and patience than me are likely to achieve some excellent poses. 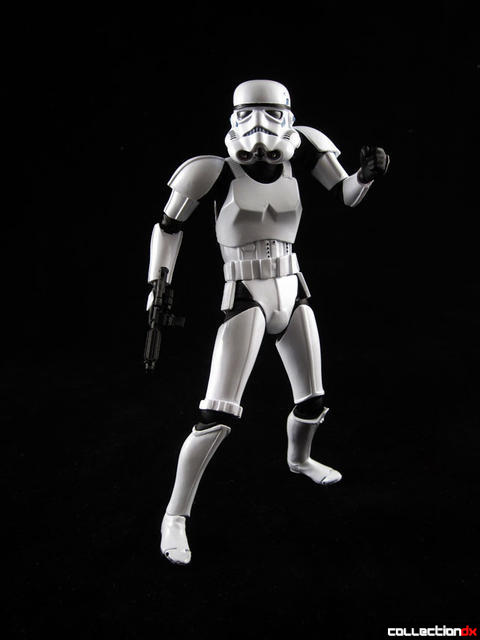 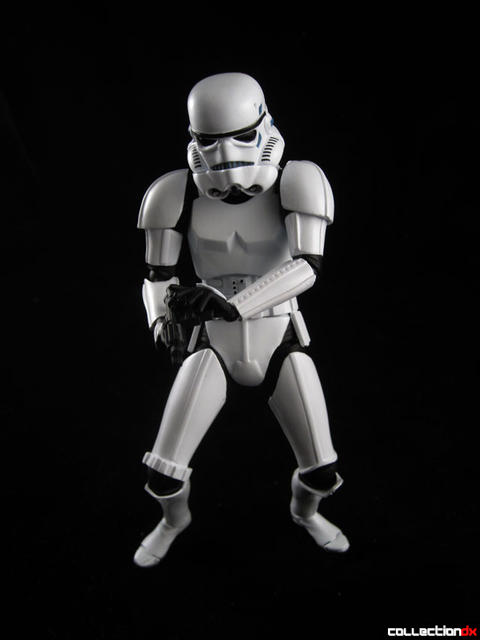 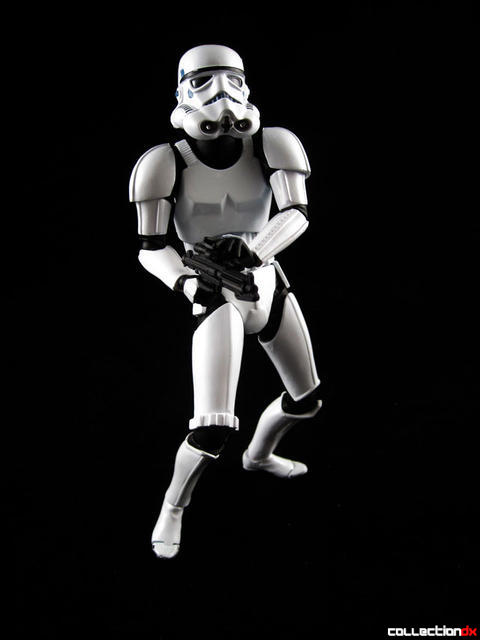 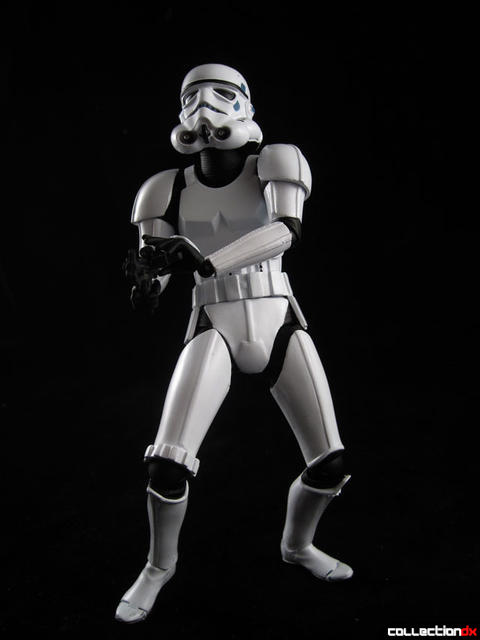 I preferred to just imagine that Bowser from Sha-Na-Na was under the helmet. 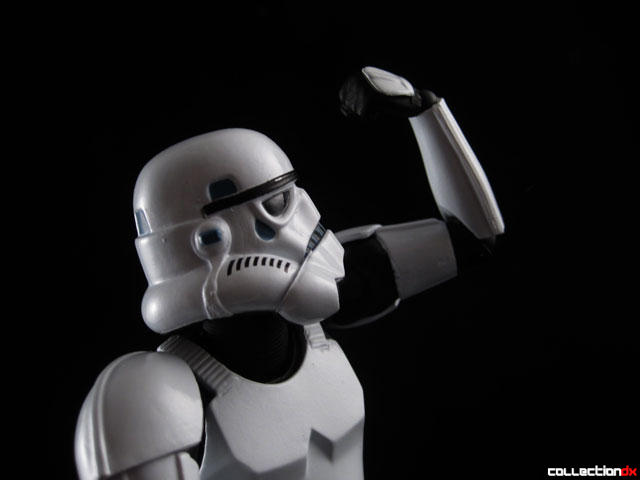 As you likely know, I tend to personally prefer a less dynamic appearance to my figures and in keeping with Revoltech tradition, this one is sculpted such that it appears constantly ready to spring into action. The shoulders look tense, the chest is constantly leaning slightly forward and of course it's crotch thrusting. 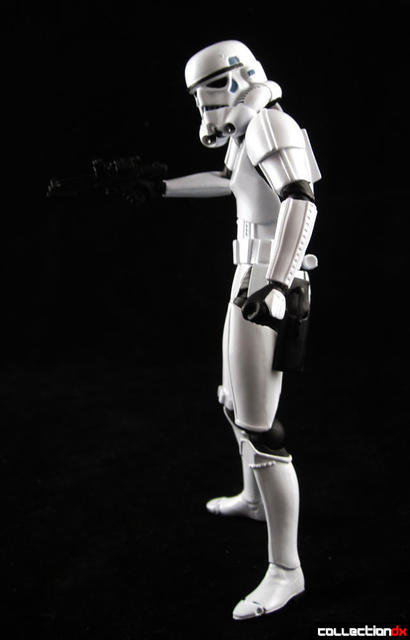 The figure feels solid, like it can take a lot of abuse as you try to achieve your favorite poses, however I should point out that the stand on the blaster rifle does NOT move. It looks like it does and I actually tried to lower it, but instead broke it clear off. A small bad of glue reattached it fine, but I don't want you to make the same mistake I did.

Lastly, I had a little bit of fun with the figure and swapped the head with one of the heads from the Flyboy figure (again, the joints were compatible) to create a zombie Stormtrooper! 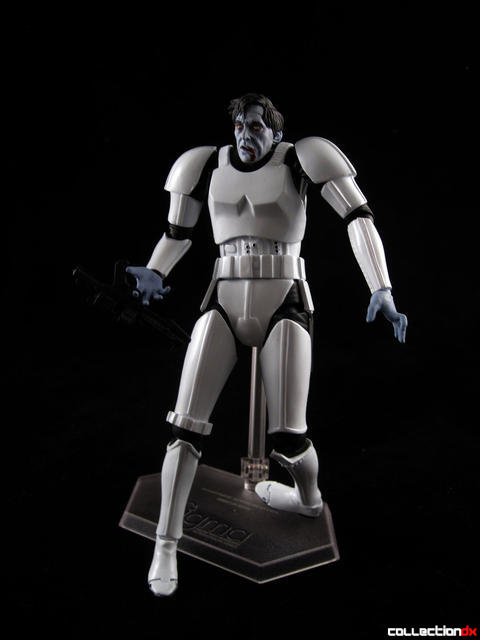 Overall, I found the toy to be a well made figure that is fun to fiddle with, but not my personal cup of tea for display.

I just got this guy yesterday, and was also missing the base. I'm guessing that means it just doesn't come with one, or we're both unlucky.

The Revo Troopers seem pretty much on-scale with the Black Series Troopers, but maybe a little more athletically proportioned. The blaster on the Revo is also a bit smaller.

Overall a fantastic figure if you don't mind paying a bit more for a lot more poseability with your Troopers, and a much better offering than their jigsaw caped Vader.

you should look more into how the legs and the waist connect. revol always has weird legs connection. even though revol's figures look fine buthbecause of the legs connection is always bugging me