In today's mass media world, zombies are all the rage and even mainstream fare, but back in the 1970s, things were different. Following George A. Romero's 1968 genre redefining classic "Night Of The Living Dead", zombies still didn't quite catch on in a big way. Only a few other, mostly Spanish, films really tackled the subject with any degree of success. 1971 brought the beginning of Armando D'Ossorio's "Blind Dead" series with "Tombs Of The Blind Dead" but these zombies weren't quite the same as the rotting, flesh-eating ghouls we've come to love. The next year would bring the Paul Naschy vehicle "Vengeance Of The Zombies" as well as the Bob Clark sorta classic "Children Shouldn't Play With Dead Things". "Let Sleeping Corpses Lie" would come in 1974 but even this atmospheric classic is limited in the sheer quantity of undead seen onscreen. It would take a return to the genre by Romero to really kickstart the first wave of zombie-mania.

"Dawn Of The Dead" was released in 1978 and while it was certainly successful here in the United States, overseas it was nothing short of a phenomenon. Dario Argento's re-edited version released in Italy spawned more copycat zombie films than you can shake a stick at and while zombies were popular for the next two decades, the last 15 years have seen them overtake the psycho killer as horror's boogieman of choice. Zombies are prevalent in movies, TV shows, comic books and yes, toys.

With that background in mind, today I'll be taking a look at the figma "Flyboy Zombie" from Dawn Of The Dead that comes to us courtesy of HobbyLink Japan. 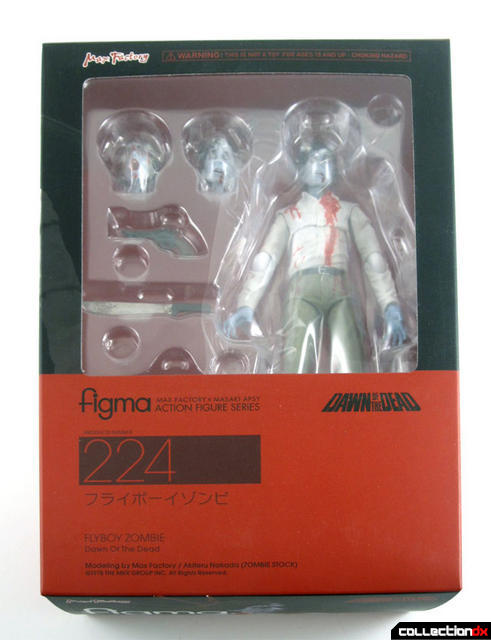 This figure comes packaged in a box approximately 8.5" x 6" 3" with a clear window on the front to see the figure in. Roughly the top 2/3s of the box is black with images of the toy, while the bottom half is where all the text is printed. At first, I thought it would have been neat to see an image of the movie poster in the blank space to the bottom right of the front, but from a pure design standpoint, I think I like the separate layers, with a more solid band on the bottom and all the "action" up top. It's nice symmetry. 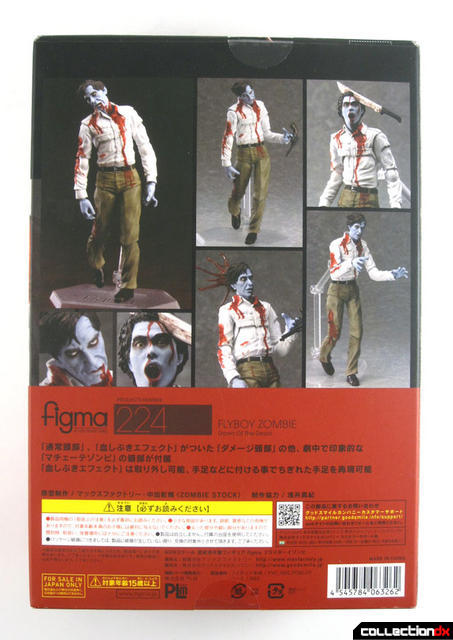 Inside the box, the figure and all it's accessories (7 extra fists, 2 heads, brain splatter and weapons, along with an adjustable stand) rest in a clear plastic tray. 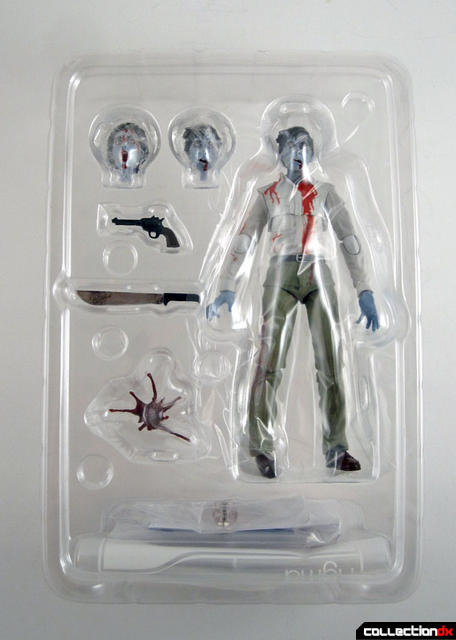 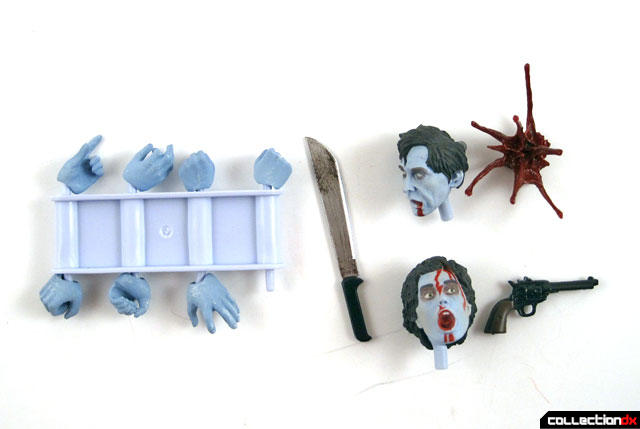 This is my first figma figure so I wasn't quite sure what to expect, but it has a nice rubbery, yet solid, construction that feels nice in the hand and invites posing. The material used looks great too. Short of using actual cloth, I think it looks as realistic as possible for a heavily jointed figure. 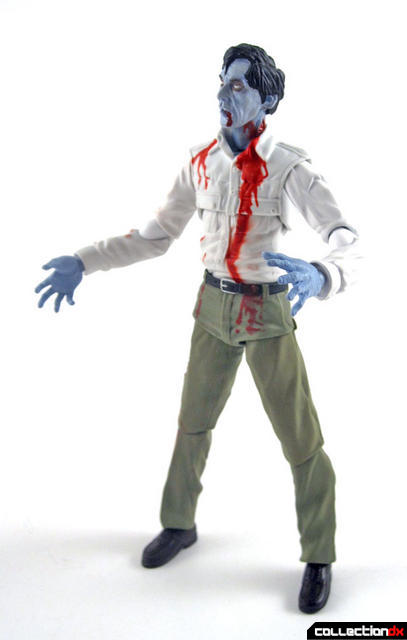 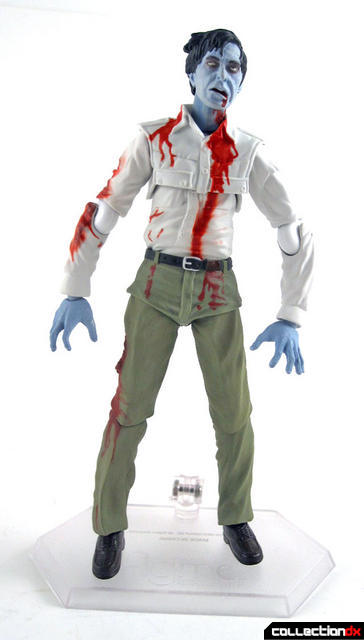 Sculpting and paint work is top notch. The likeness to Flyboy (real name: Steven) is dead on, if you'll pardon the pun. The elbows joints may stand out a bit if the arms are posed in a straight line but a figure like this isn't likely to ever be displayed that way, even by someone like myself who typically likes a less dynamic stance. 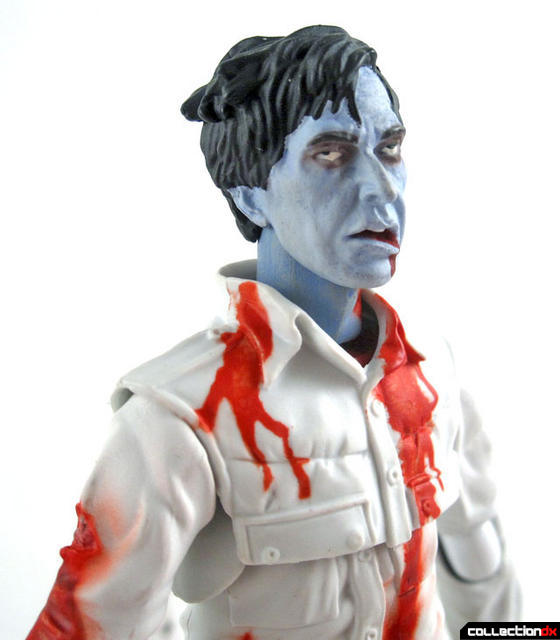 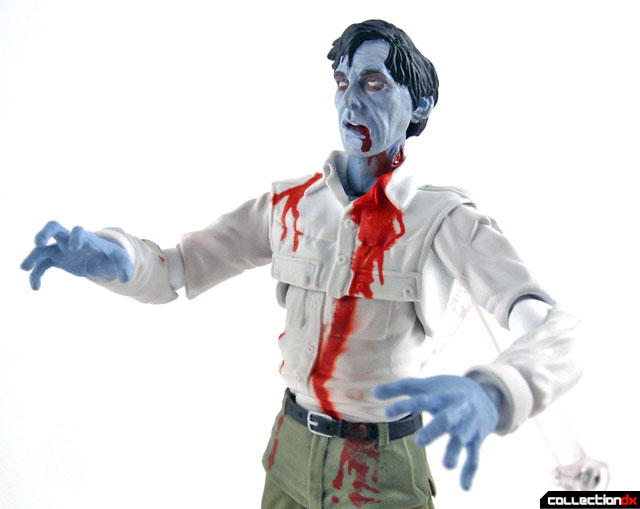 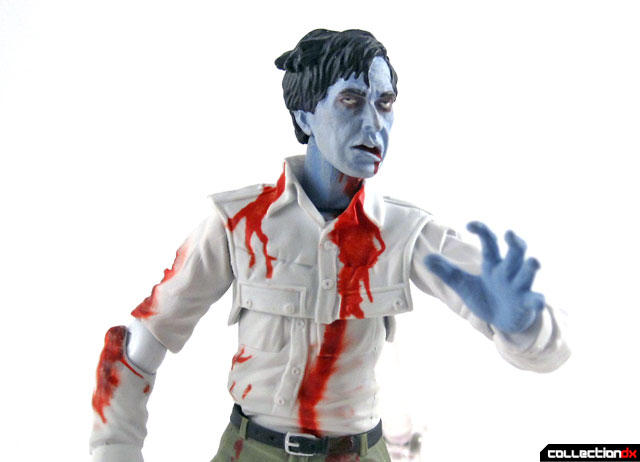 One of the weapons included is the pistol Steven was using to, unsuccessfully, fend off the zombies as they attacked him in his final moments of life. As a zombie in the film, he could be seen still carrying it and you can replicate that with this figure. One of the alternate hands has a slightly opened fist that you can have him actually grasp the gun in, but it's a tight fit. Since the image of the gun simply dangling from his finger is more iconic, I suspect most would display it that way, if at all. 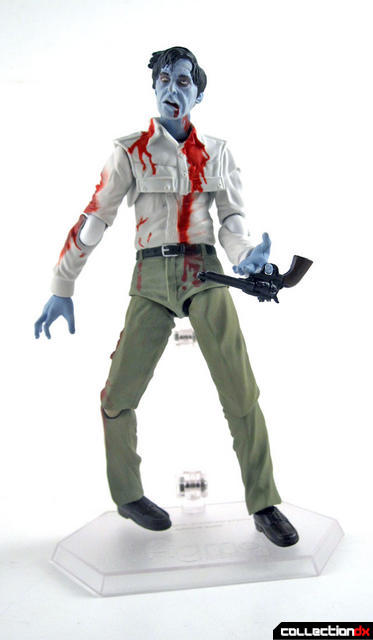 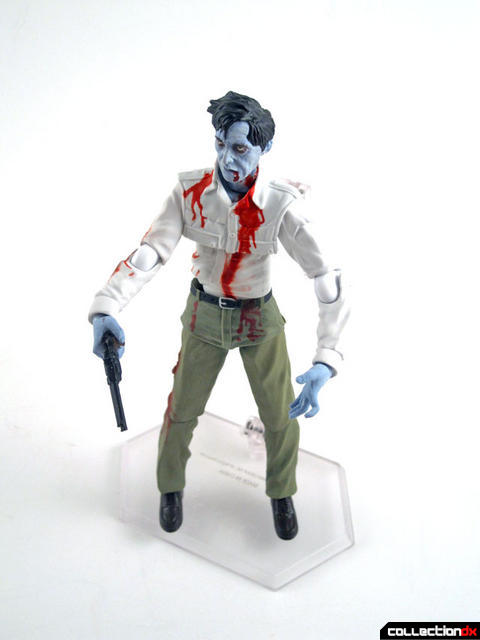 As you can see in the clip above, Flyboy meets his end in the way most common for a zombie; with a bullet to the head. You can also replicate this moment from the film with some of the included accessories. There is an extra head that has a small hole in the back into which you can place a small clear tab onto which you place the flying blood. While the idea is admirable, I have a couple of problems with the execution. Firstly, the second head is almost exactly the same as the regular head. It has the hole in the back and a slightly different paint job, but otherwise it's the same sculpt. This means that although there is blood and brain flying out of the back of the head, there is no entry wound on the front! Even a small paint application to at least suggest the spot where the bullet entered would have been greatly welcomed. 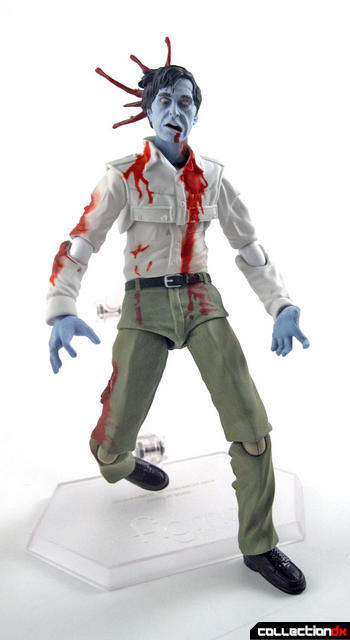 No such scene exists in the movie, but you can also pretend that Flyboy decided to off himself at the last second. 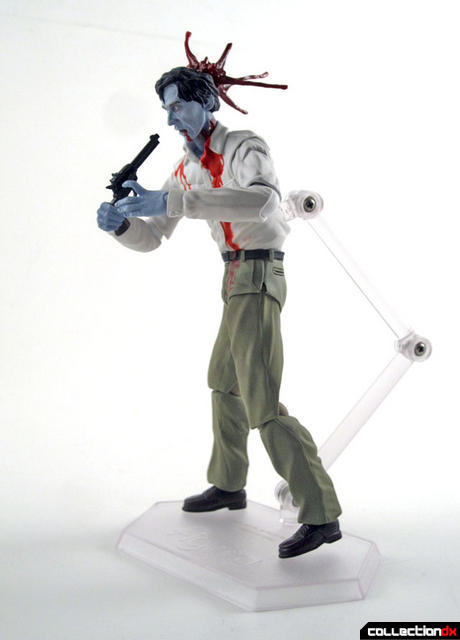 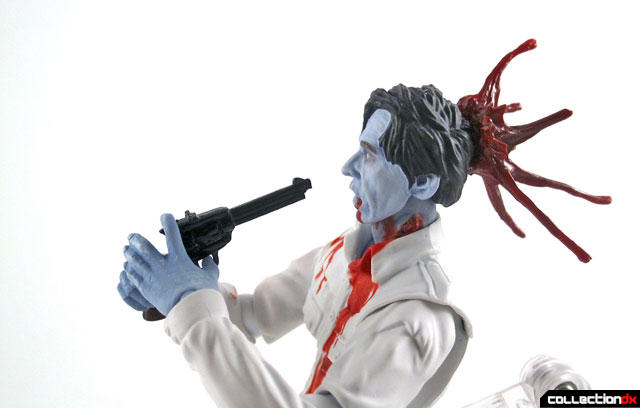 Besides a gun, Flyboy also comes with a machete. 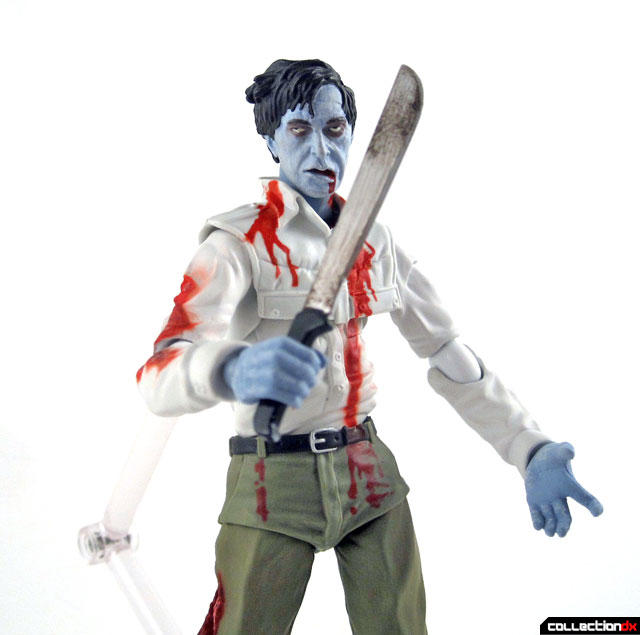 He never uses one in the movie, but it is included to go along with the third head in the set, that of a completely different zombie from the film that just happened to be wearing similar clothes and had a brief but memorable scene in the film when he gets a machete to the head from Tom Savini's biker character. The likeness on this head is also excellent and has a slice that the machete fits snugly into. Strangely, this one is a two-part piece. The whole head splits apart but there doesn't appear to be any reason for it that I can see. 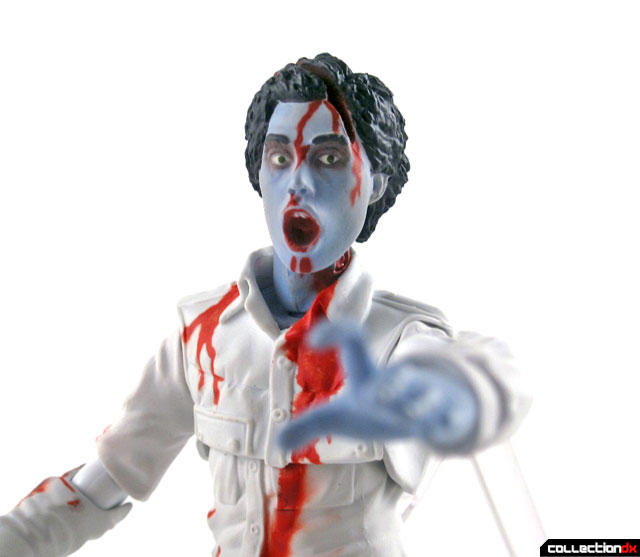 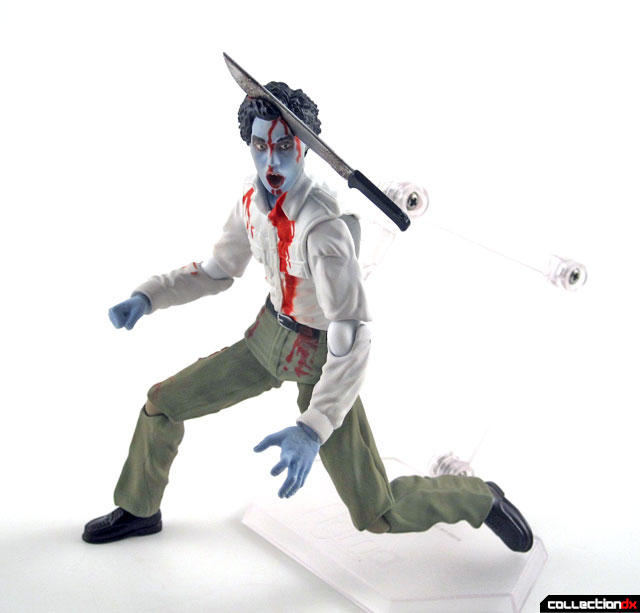 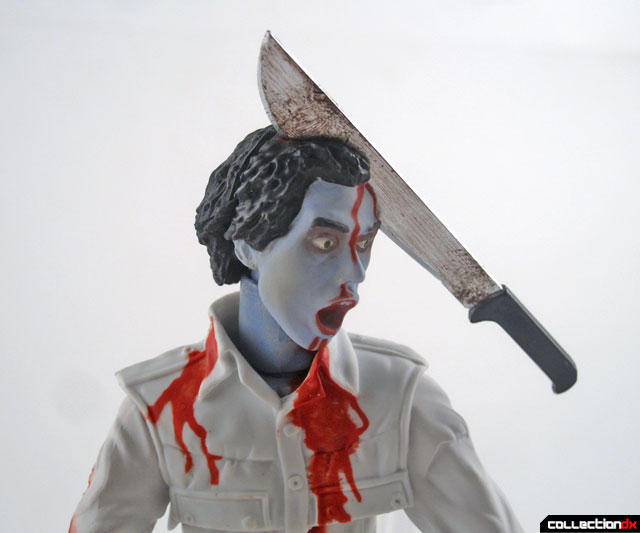 Another fun, but not screen accurate, pose you could make would be to have Flyboy stumbling along with the other zombie's head stuck at the end of the machete! 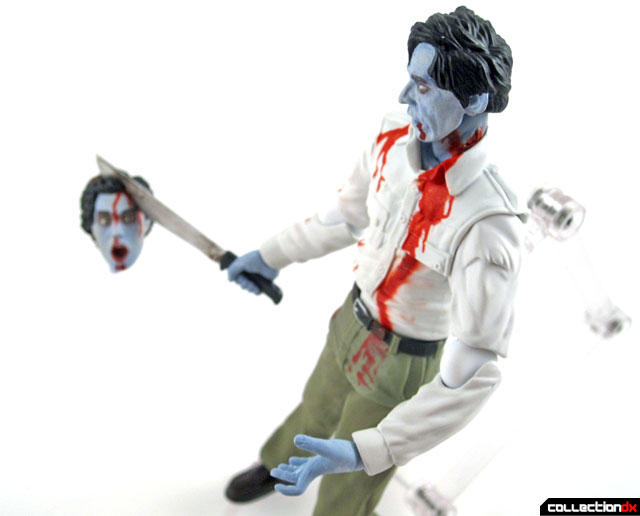 As this is my first figma toy, it's also my first experience with the stand, which I'm very impressed with. Of course, the figure is of a zombie so there's really not much reason for any particularly outrageous poses. That said...zombie drop-kick! 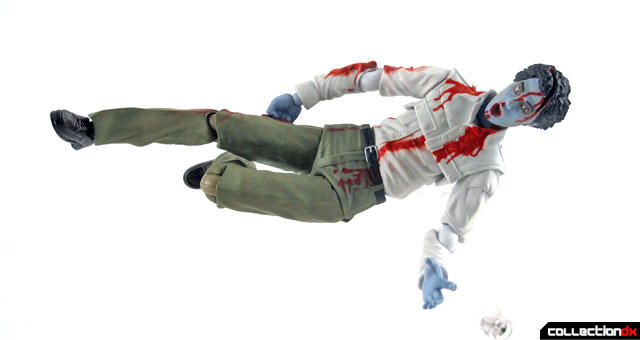 Overall, I really like the figure. I wish the extra head had the entry wound, or maybe was a pre-zombified Flyboy instead, but I think the extra machete zombie head makes up for that. It's a couple of inches shorter than my other zombie toys, but stands on it's own as a quality figure. 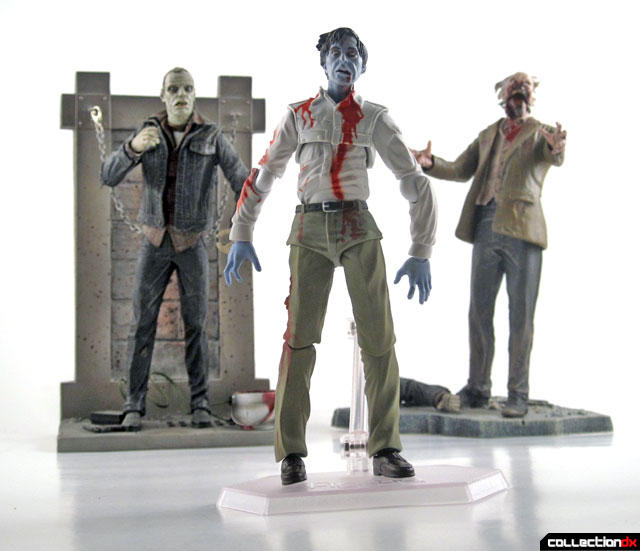 You can order yours from HobbyLink Japan.