Not having had the original or repaint of Fewture’s EX Gokin Getter 2, this black version was my first time seeing the mold in person, and I have to say that I was extremely impressed. At nearly 9.5” and featuring a mixture of glossy black, silvers and gold, it’s the type of paint job that you would expect on a stature rather than an actual, playable figure. 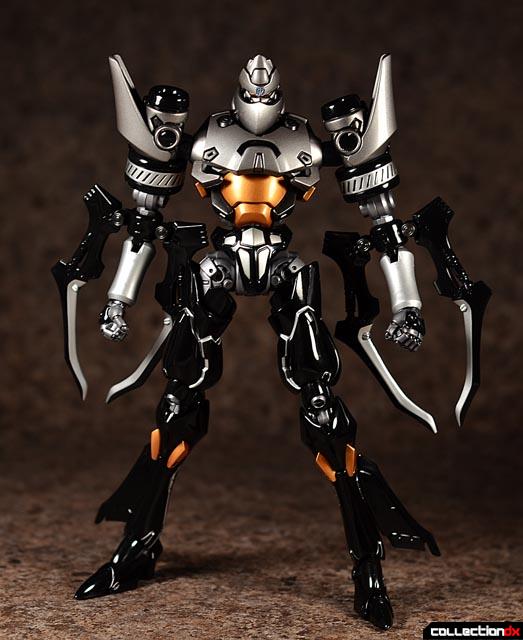 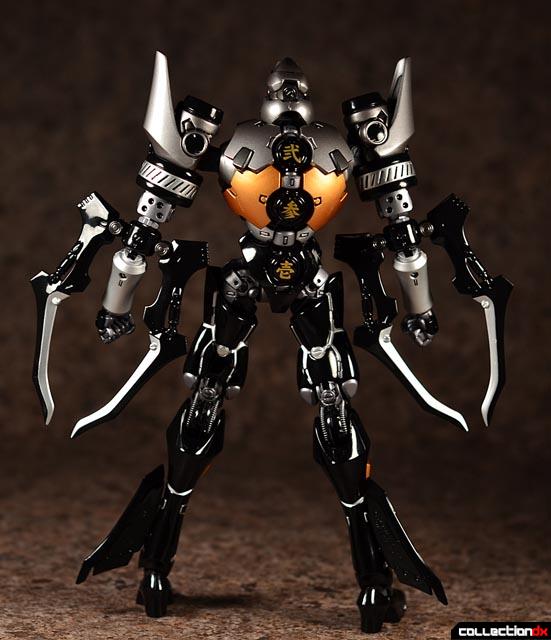 A nice amount of articulation and plenty of ratcheting joints make this figure fun to pose around.

Looking deeper into this toy, it’s nice to see some “reveal” features like it’s head tilting up from it’s ninja-like face guard to reveal a grimacing face, as well as the chest and abdominal covers removing to show it’s removable core. The crotch plate also flips out to reveal an energy tube that can be swapped for a longer one: 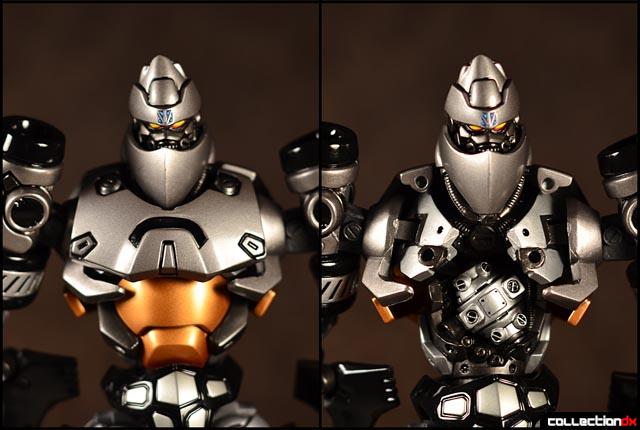 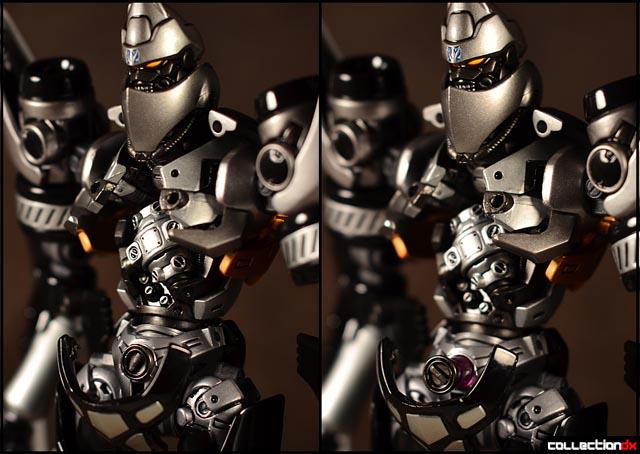 The accessories are a “necessary few” in that there aren’t many, but they provide essential. 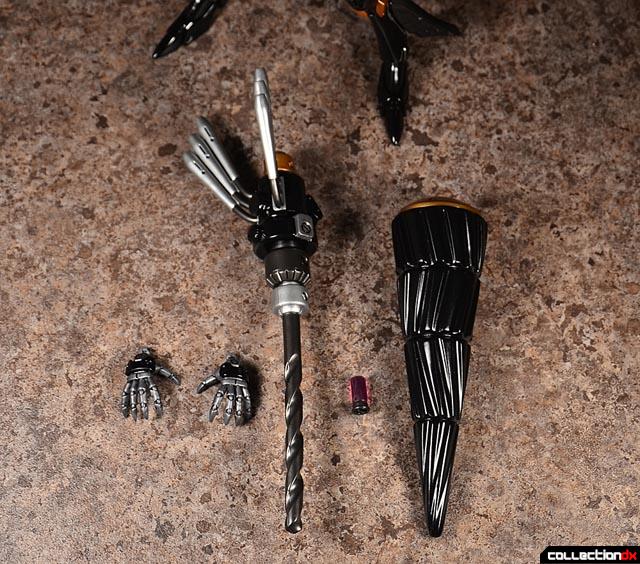 By default his arms come with pinchers at the tops of his forearms that open and close. They really add a lot to his arms which I think would be a bit lanky and boring without them. 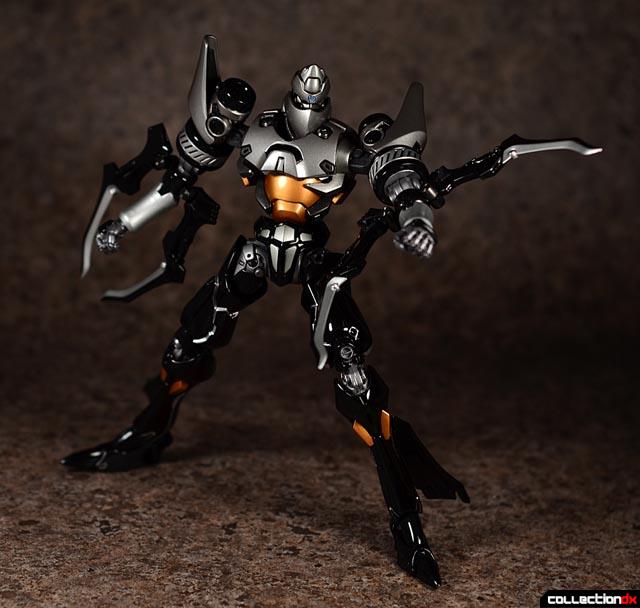 As seen in the accessories picture, he does come with the trademark drill-styled arm. The default, more thin drill isn’t too heavy and poses nicely, but when you attach the larger, vinyl drill on top of it, it becomes extremely heavy. Unfortunately the elbows are one of the few joints on this figure that aren’t ratcheting, so there’s no support to keep the larger drill from weighing the arm down. 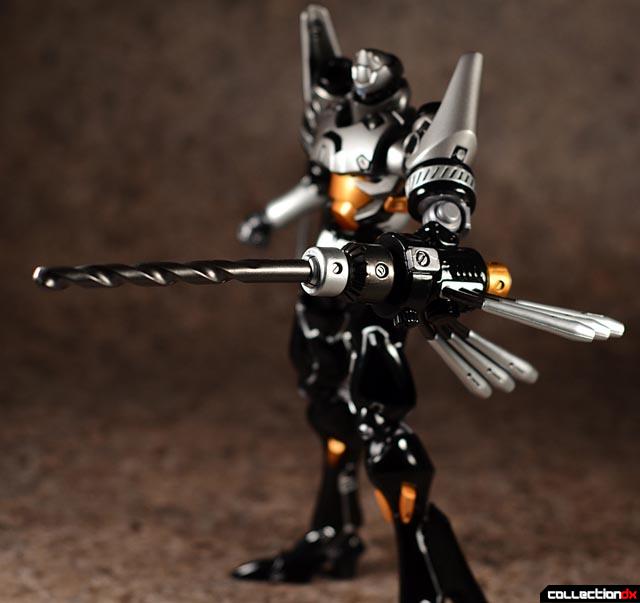 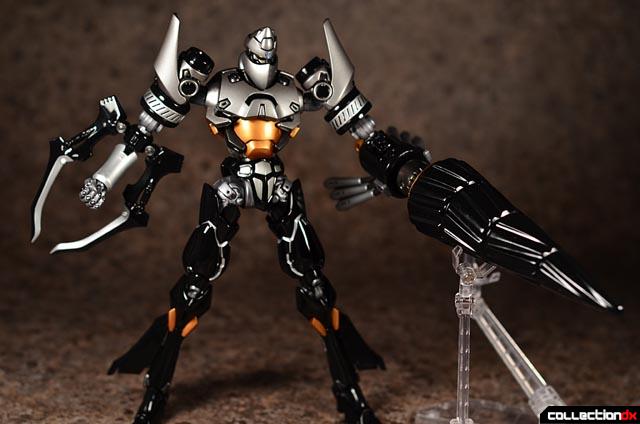 Overall, this is a fantastic piece and fits in very well with the Black Getter 1 Ryoma (Or Black Getter 1 if you choose to switch over the “changing” version). I do have my gripes like the balancing and non-ratcheting elbows, but it’s still a piece that I would recommend to fans of Getter Robo and Gokin alike. 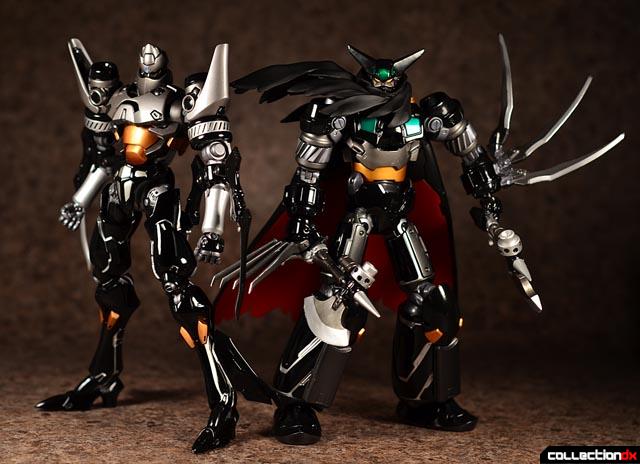 11 comments posted
I love the detail on this

I love the detail on this but yeah, I agree this kind of detail really belongs on a statue than a figure but it's still is nice even though its has balancing issues. oh well

Yea, definitely man. I think it's a pretty awesome figure for the $300 or so that importers are selling it at, but some of the US e-tailer prices like $500 are high IMO.

I know Anime-Export had their preorders at the lowered price, but I lucked out and saw it randomly on Mandarake before retailers had even gotten them in at 300. It was seriously the most dumb of luck.

that was weird, huh?

To say the least. Since Mandarake is second-hand for the most part, it's normally a good bit after people have gotten them in hand before they get things in stock.

Great pics and review! I love your background. What kind of material is it?

I use/prefer vinyls for shooting just because they're so easy to clean.

TJ, great to see you on board with CDX! Always great to see your excellent photos. This figure looks real good in these colors, real sinister-like. While I would love to own this, I am saving for the 3 getters that come out later this year

Hey, thanks CP! And yea, I hear ya. I'm back and forth on whether or not to get all three Getter Gs or just stop at dragon. Something about Liger is just throwing me the hell off.