n the OVA Macross Dynamite 7, free-spirited space rocker Nekki Basara got caught up in the conflict between the people of planet Zola and nasty space pirates, looking to poach the resident galactic whales. Towards the end of the series, Basara is able to "borrow" a newly arrived Valkyrie and once again take to the stars so everyone can listen to his song!

The VF-19P in Zola Patrol livery would end up being the last variant Yamato Toys would release of this figure, before their untimely demise and subsequent "rebirth" as Arcadia. Since I've reviewed a version of this toy no less than three times before, I will try to focus on what makes the VF-19P different than its predecessors. 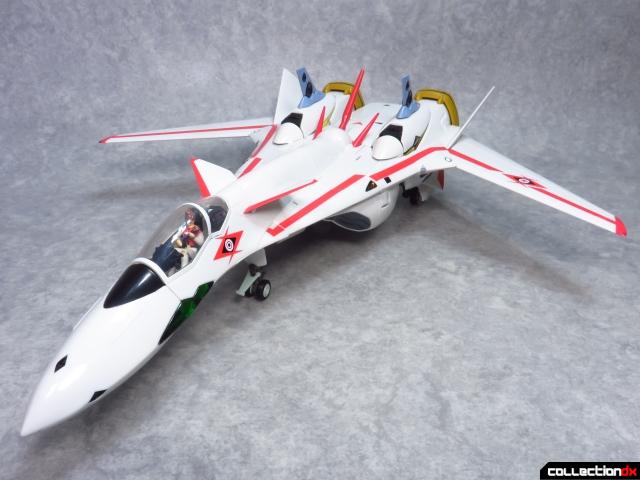 Even years after the Fire Valkyrie debuted, Yamato's take on the VF-19 holds up as one of the best representations of this sleek variable fighter. Zola Patrol colors take an already stunning toy and make it even more eye-catching, as the toy's glossy plastic finish makes it gleam in the light. As a 1:60 scale VF-19, the toy is roughly a foot in length (or 33 centimeters). 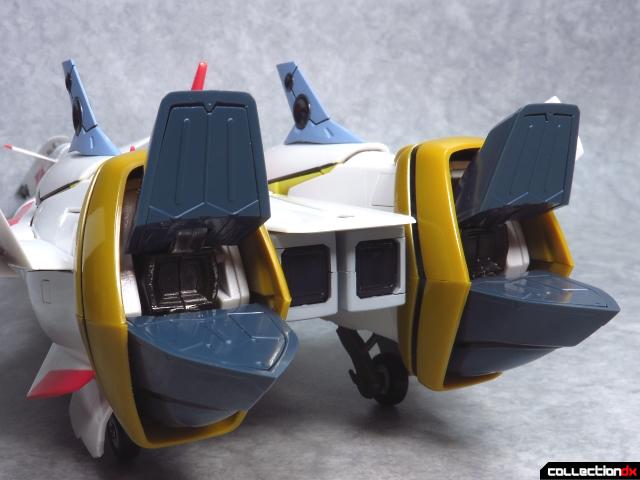 A good helping of structural diecast parts (like the ankle/engine assemblies) gives the jet a good feel in the hands. 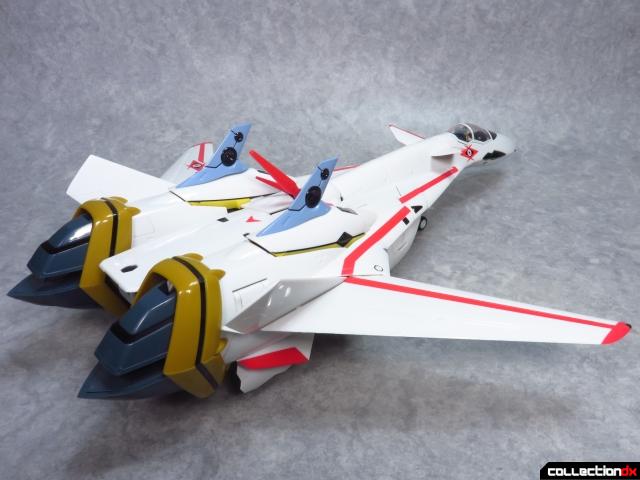 Yamato would end up being the first company to produce a completed toy of the VF-19P, as Bandai never touched anything from Dynamite 7 in either their DX toy line or their accompanying Macross model kits. Getting a chance to examine this great white bird in hand, I've suddenly realized the way its red striping is laid out seems to be a direct callback to Hikaru's VF-1J Valkyrie from the original Macross TV series. Now it makes more sense why the stripes along the plane's LERX (google it) are not continuous with the ones on the wings - they're supposed to mimic the chest plate stripes seen on the VF-1. I've been a Macross fan for a long time, and I'm still noticing new things! 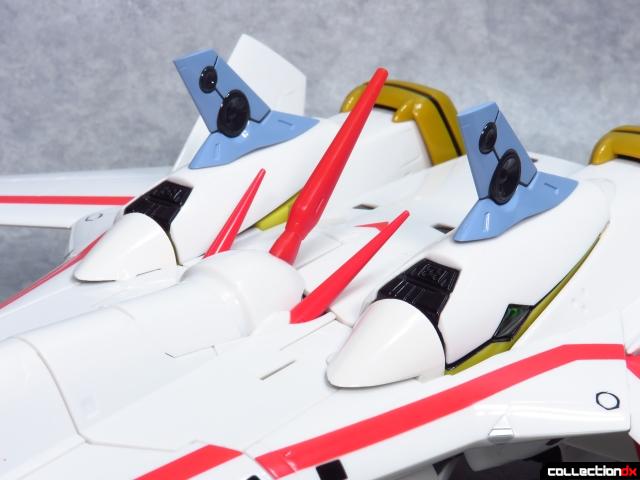 And speaking of new stuff, perhaps the most noticeable changes brought on with the "P" variant are the use of a triple-laser gun-toting head and a pair of fin-shaped speaker units. 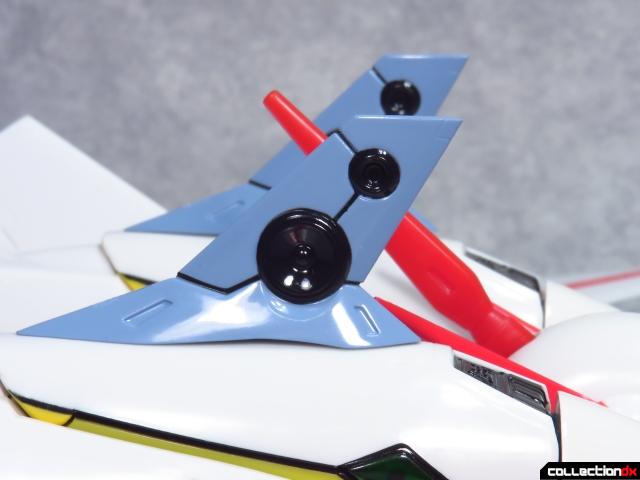 These sharp pieces of equipment (like, literally, so handle with care) are packaged separately from the toy and simply plug into a hole on the top of each shoulder pauldron. It's a snug fit, so there's little chance of the speaker units falling out during handling. Although you may want to set them aside for transformation, lest you end up with holes in your hands... 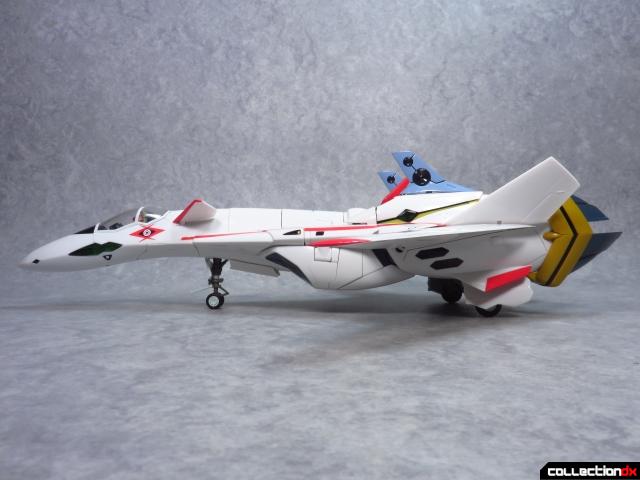 A view from the side reveals another subtle change to the Fire Valkyrie design, in the form of new leg panels. 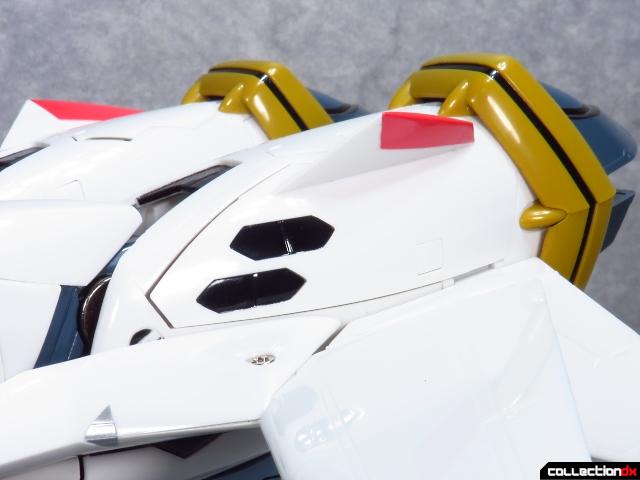 These panels include a set of molded missile hatches and an extra fin, which is another callback to earlier Valkyries (the VF-19Kai and VF-19F/S both lacked these). 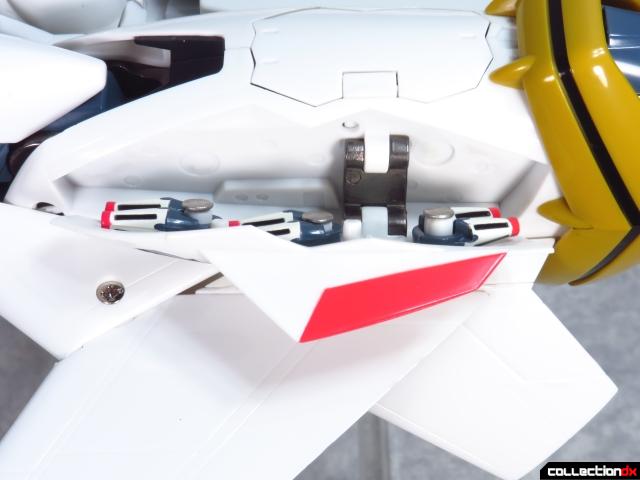 As with the other Yamato VF-19 toys, you can still lift up either leg panel to reveal a bank of swiveling missile heads. This gimmick is actually easiest to use on the P-type, since you can just use the fin to hinge the door piece outward, rather than jamming a fingernail between the seams. 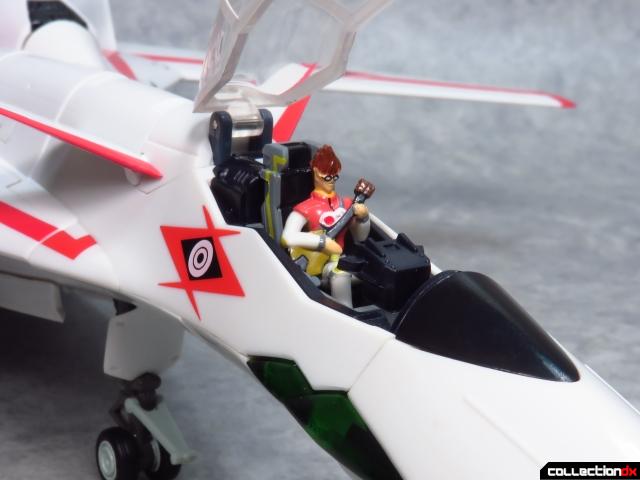 For a pilot figure, the VF-19P comes with Basara in basic Zola Patrol space suit (sans helmet), clutching an acoustic guitar. The tiny space John Lennon looks quite good given his rather intricate outfit, but I can't help but sometimes see a hat-less Where's Waldo due to his thick rimmed glasses and prominent mouth. 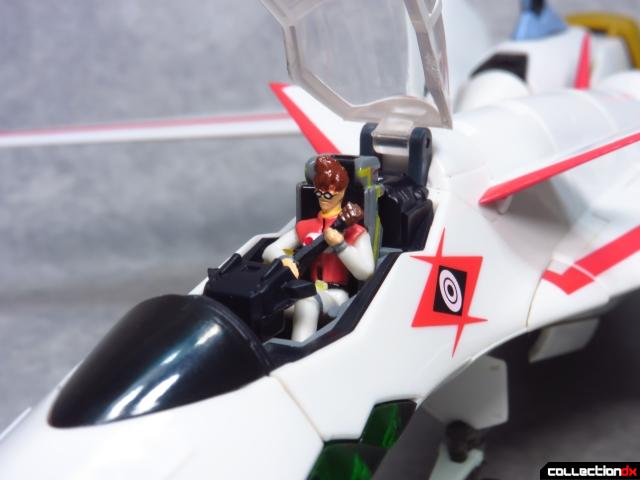 In any case, the pilot figure perfectly captures the daring singer just as he was last seen in Dynamite 7. There, Basara demonstrated that he can pilot a Valkyrie while strumming his guitar! There was no Sound Force style six-string joystick here, just a man moving his instrument like it was an extension of his own body. Truly, Basara is a serious artist. 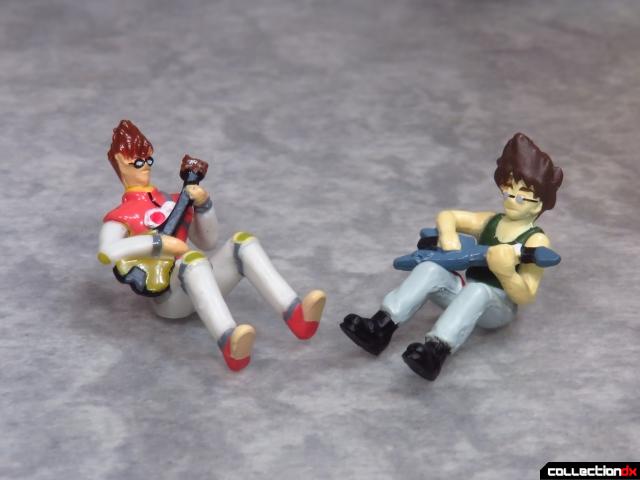 When compared to the Fire Valkyrie's Basara figure, the VF-19P's looks a bit sharper in terms of sculpt and detail. Still, I think I prefer mister tank top and jeans, because his big anime hair looks poofier.

There is also a third Basara figure that came packed with the Sound Booster, but I never got around to getting that thing... 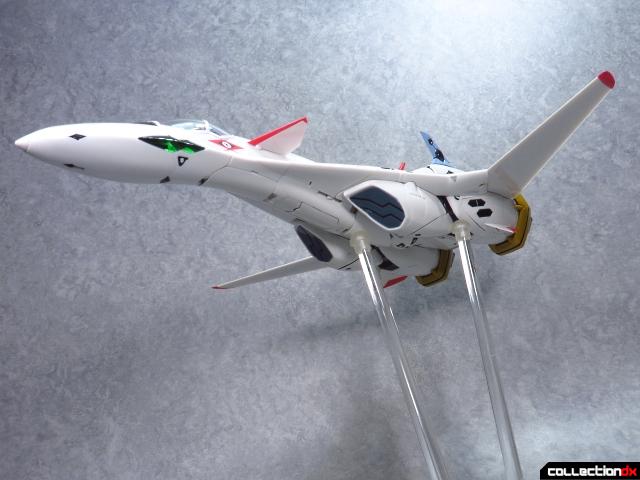 For this review I have eschewed using the included stand adapters in favor of my trusty FlightPose. The VF-19P also includes a mountable gun pod, but I left it off to match how Basara flew off with the Valkyrie before the Zola Patrol even had a chance to test it, let alone arm it. 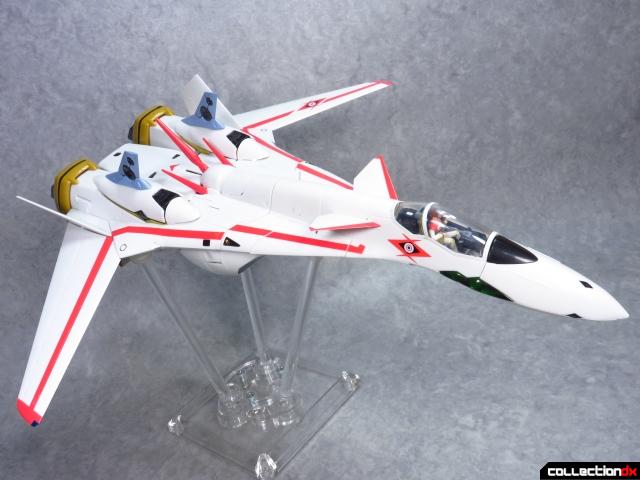 Not that the VF-19 needs weapons to look aggressive. 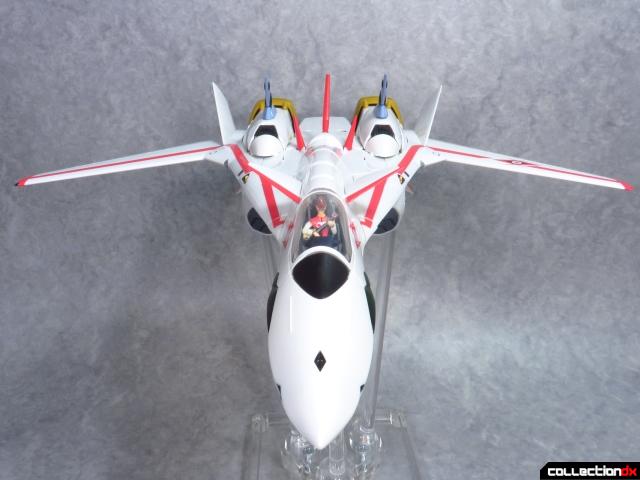 Even a pacifist like Basara knows you need a good Valkyrie to save the space whales! 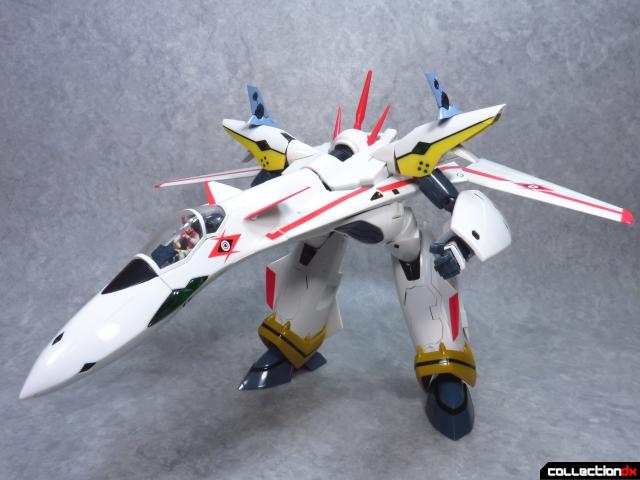 Aside from the additional speaker units on its shoulders, VF-19P transforms identically to its brethren. As such, a fresh from the box example will have some wicked tight spots that you'll need some patience (or a good fingernail) to deal with. For Gerwalk mode, the two speaker fins are rotated to be parallel to the main body. They even have a slight curved indent along the bottom to better straddle the shoulder pads in this position. 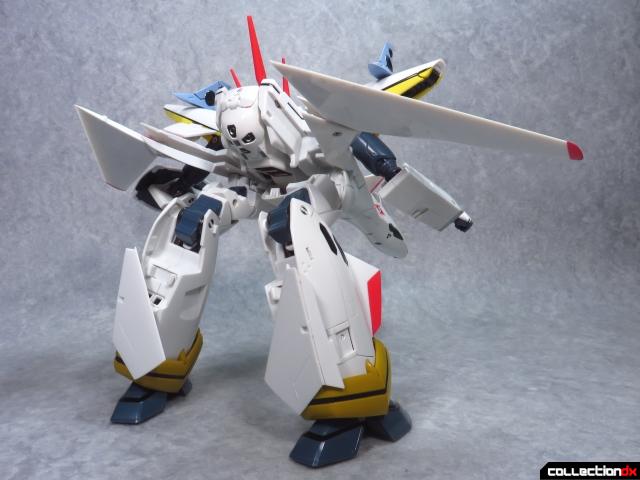 Those legendarily strong clips that lock the calves to the shoulder pads for fighter mode haven't dulled with age. Also, the somewhat dodgy ankle joints are still present, but again, these can be fixed with some thickening agent of your choosing (floor polish, a dab of superglue, etc). 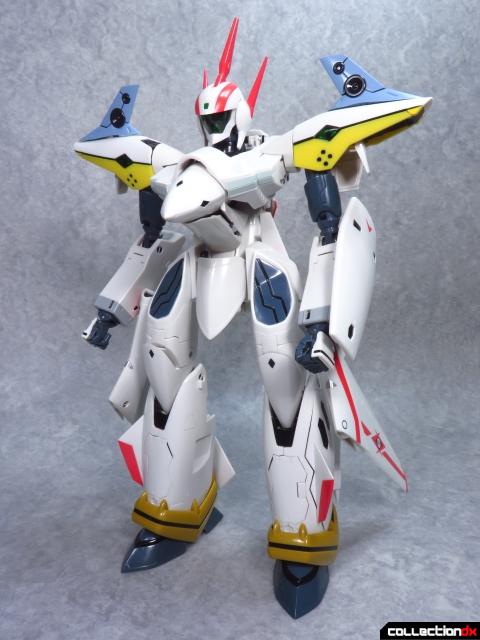 Battroid mode is where the P-type truly becomes its own Valkyrie. 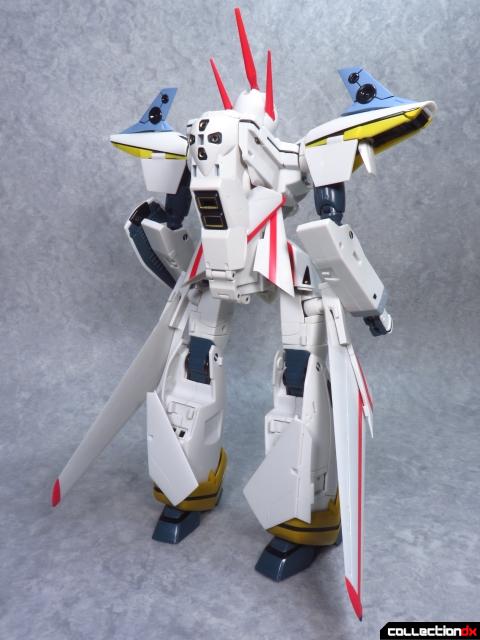 That said, it can still mount the Sound Booster accessory, and includes filler parts for the back of the thighs, as well as an alternate anime-accurate shield. 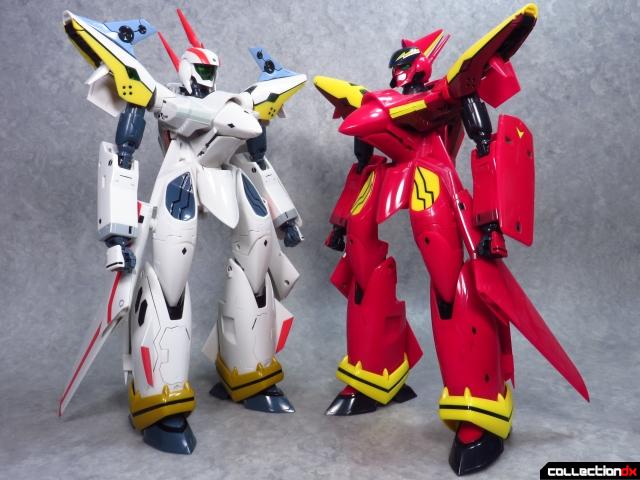 In an interesting move, the VF-19P is not based on the more militaristic Emerald Force VF-19s, rather it is a remold of the Fire Valkyrie. This was a not so subtle hint to fans watching Dynamite 7 that Basara's legendary Valkyrie would soon be reborn. 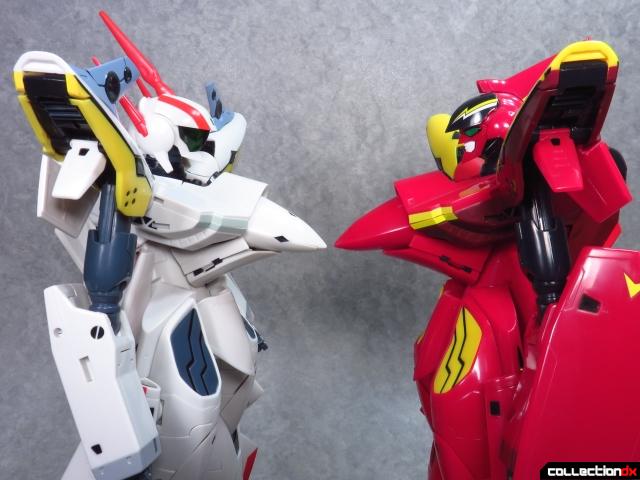 Yamato kept up their staunch attention to detail, as the Zola Patrol variant has its additional nose-mounted verniers, which none of the other Macross 7 VF-19s have. This can be seen as a callback to the YF-19 from Macross Plus. 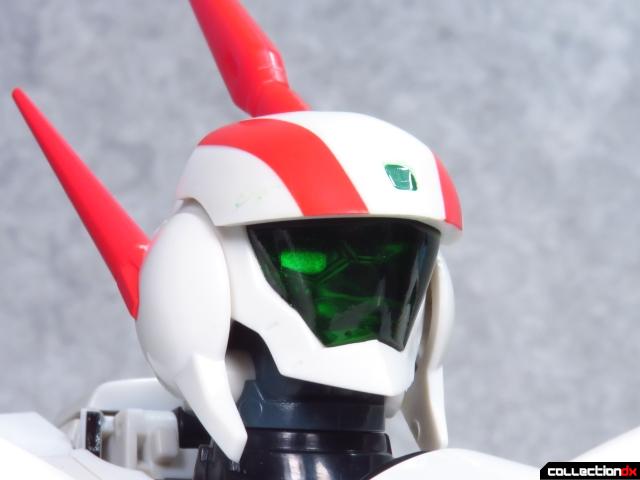 The star attraction for this variant is its unique head design. A clear green visor takes the place of the typical ninja mask type face seen on VF-19s, which makes the P-Type look like a Valkyrie pilot itself. If you've ever looked at some Macross 7 art books, you'll find many of the pre-production designs for the VF-19Kai included a head that looked just like a dude wearing a motorcycle helmet, so I'd wager this was Shoji Kawamori's way of reusing that idea. 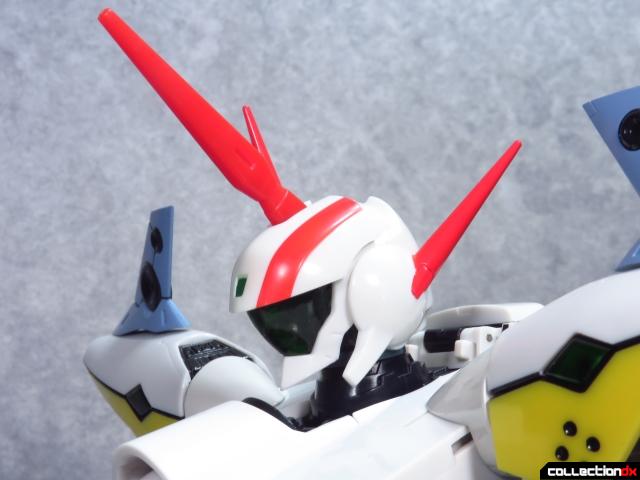 Three laser guns are mounted on the VF-19P's monitor turret. While the side guns look similar to the Fire Valkyrie's, they do not have the additional joint to adjust the angle of each barrel. Up top, the main gun can pivot back and forth, as well as slide around at the base. 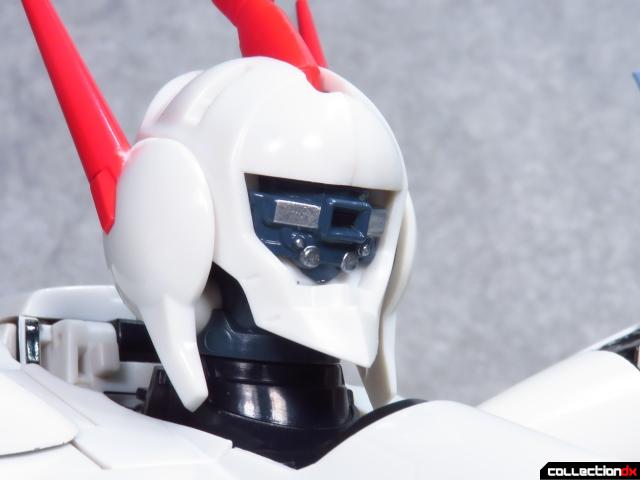 Pulling the forehead off allows you to see the camera eye details beneath the visor. 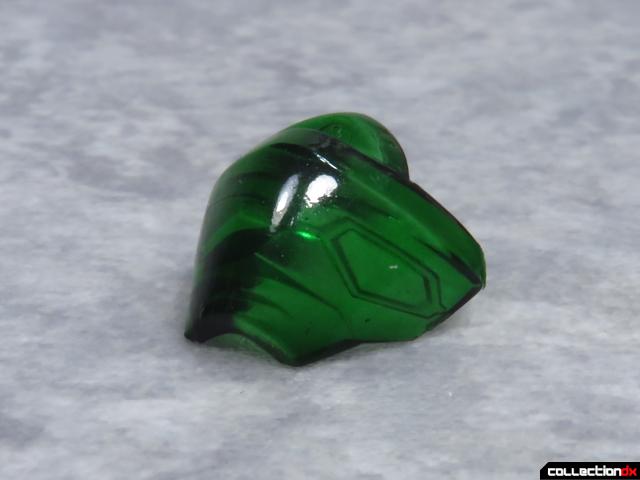 The visor itself is etched with the image of the Fire Valkyrie's face. While this may seem odd to the uninitiated, fans may remember how the VF-19P gets covered in red goo from an injured space whale, which appears to turn the white Valkyrie into Basara's old ride. This kind of scene callback is a real sign of how passionate the people at Yamato were when it came to Macross products. 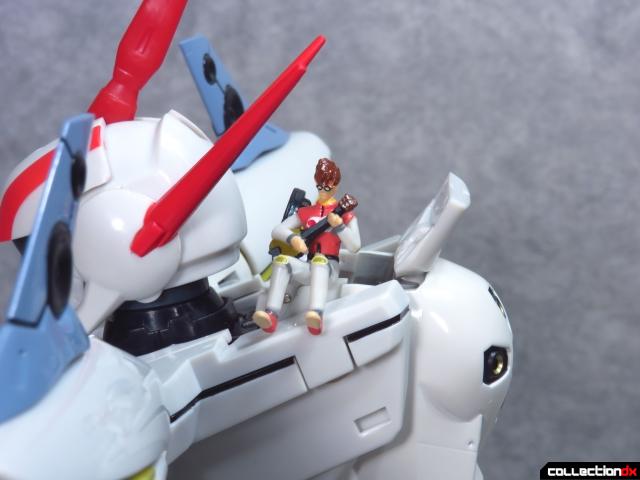 Basara always got the most use out of the VF-19's Battroid mode egress hatch, so with the P-Type you can have him chilling outside while singing to the whales. 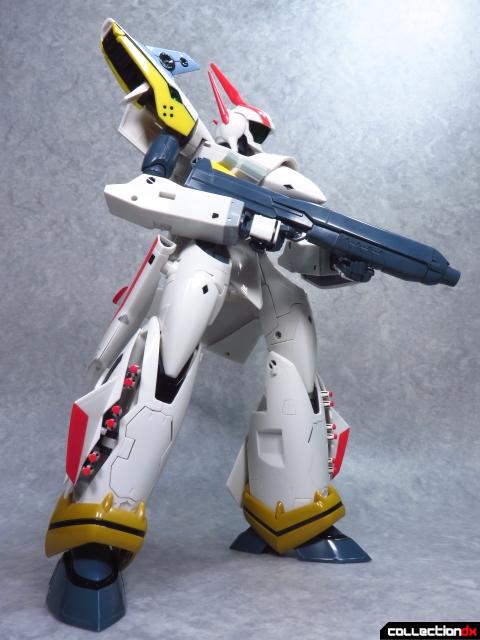 Since this Valkyrie was meant for the Zola Patrol, its gun pod is the normal shell-firing type and not a speaker pod launcher. It is identical to the ones included with the Emerald Force Valkyries, save for being a lighter gray color due to how the gun shares a mold with the gray parts of the main toy itself. 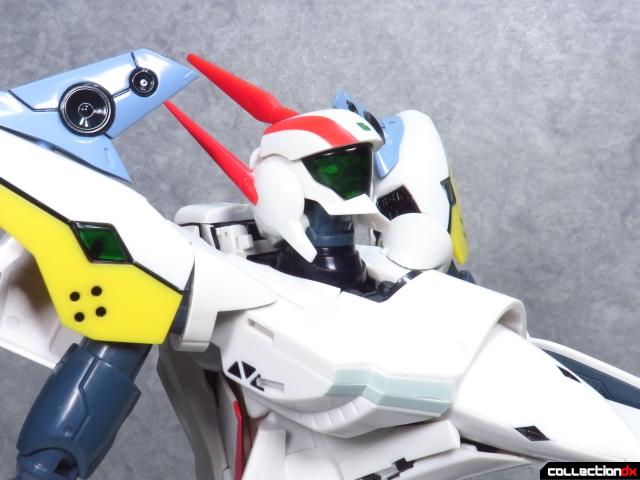 Honestly, though, I'm much more into how this Valkyrie was used in Dynamite 7 as a means to help end a conflict. A local Zolan scientist named Lawrence modified some Patrol VFs with a speaker system that could be used to prove the galactic whales were living beings worth protecting from poachers. He ends up being quite excited when Basara hops in the VF-19P so he can sing to the whales. Even the characters within Macross know that music will always save the day! 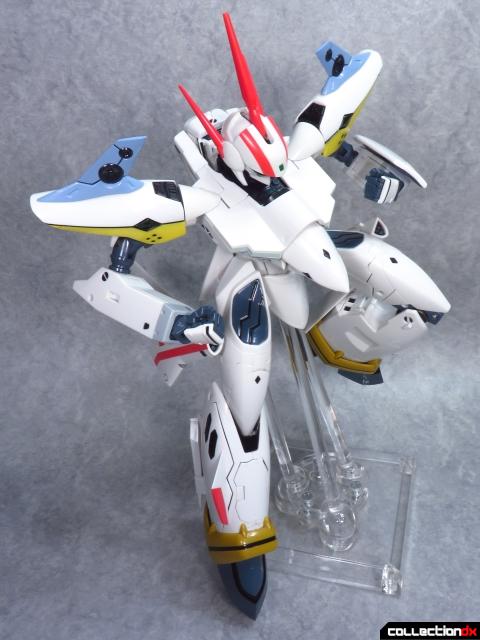 As such, I'd rather pose the VF-19P just flying around looking cool, like in the climax of Dynamite 7. 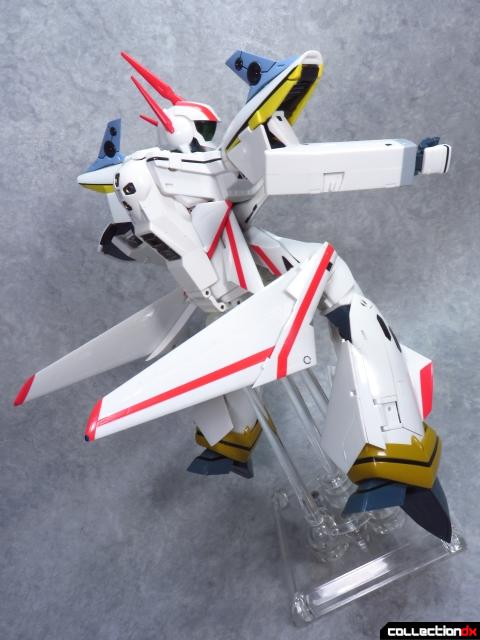 And there's something about the way the speaker units angle inward that reminds me a little bit of another Kawamori-designed giant robot, the Solar Aquarion. 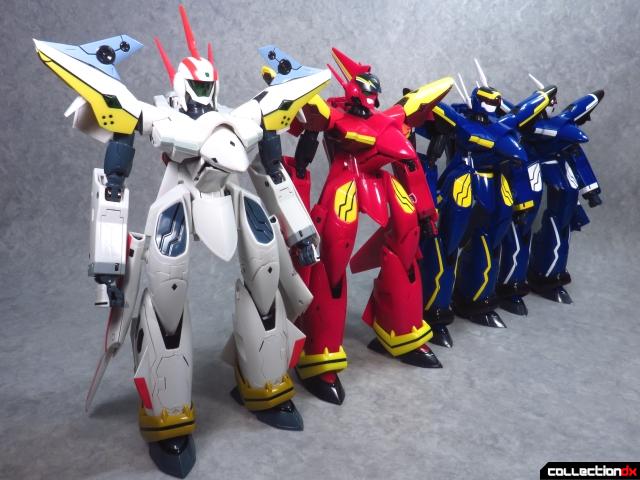 The entire line of Yamato's VF-19 figures represents a true labor of love on the part of the late toy maker. I have heard that their head of Macross products (who calls himself "Mr. K") is a big fan of Macross 7, so the Fire Valkyrie was a real passion project for him. With Yamato producing three more fantastic variants before they folded, the 1/60 scale Perfect Transformation VF-19 left a lasting legacy for Macross enthusiasts to enjoy. Mr. K would move on to Arcadia, where the VF-19Kai would receive another release as a metallic colored bundle with the Sound Booster and in-scale Fire Bomber figures. In addition, the toy's base design was used as a basis for Arcadia's popular YF-19 figure, which brought the history of the Valkyrie design full circle. Having four of these toys in my collection serves as living proof to their lasting impact on the Macross series, and I'm glad to have finally finished the main squad of Yamato's VF-19s.

I dunno, it feels like Yamato missed an opportunity to use some of that special thermochromic plastic from the Transformers Color Changers, so you could turn your white VF-19P red by dunking it in the sink for a few minutes.

Seriously, though, great review of an amazing and increasingly scarce toy.