Macross 7 is an awesome show about awesome space rock in space. It features a ton of Variable Fighters, none of which is more recognizable than the Fire Valkyrie. Nekki Basara is a crazy singer with equally crazy hair and a voice filled with passion. He pilots the VF-19 Kai Fire Valkyrie into the heat of battle to try and get everyone to listen to his song.

I was very excited when Yamato started to branch their Macross toys into the realm of Macross 7. While it started out with a few easy repaints and remolds, the best was yet to come. I was happy with their YF-19 toys and was especially eager to see how they would transform the prototype design of the YF-19 into the refined VF-19s from Macross 7. The result is Yamato's best Valkyrie toy to date. 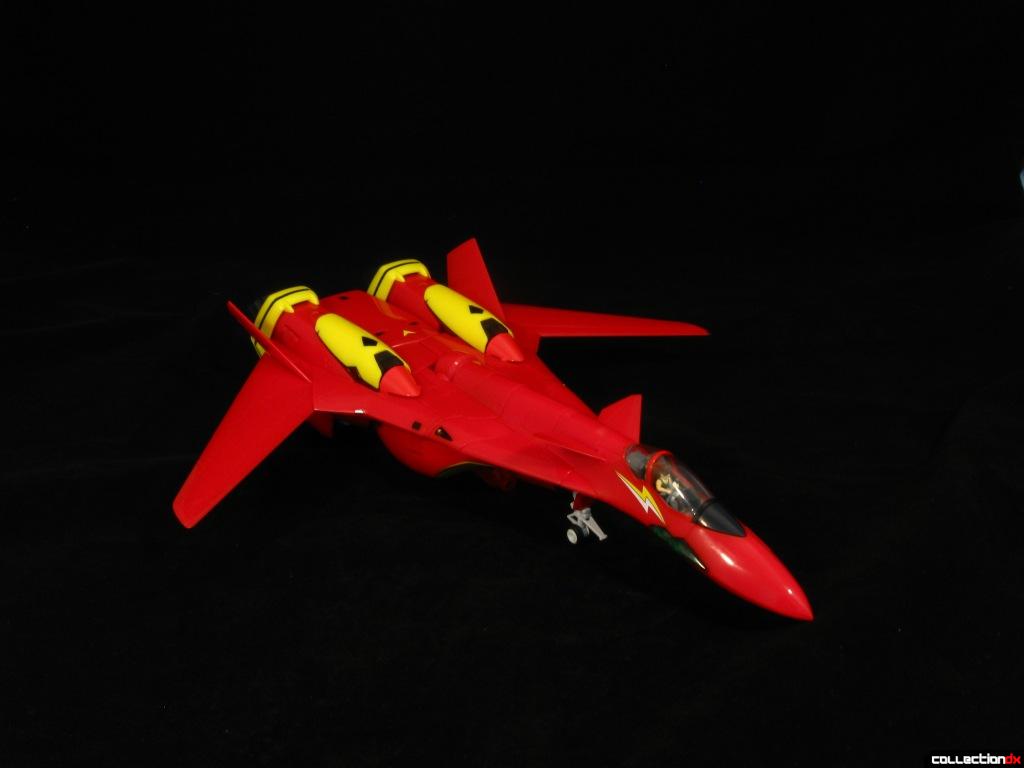 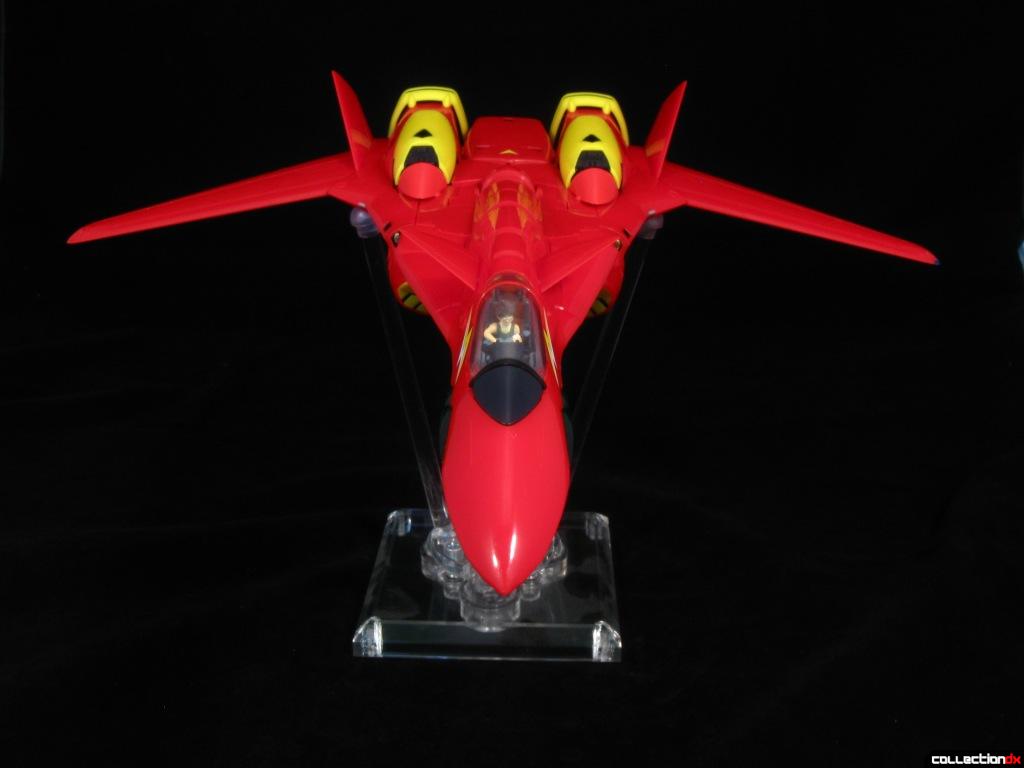 First and foremost the Fire Valkyrie is very shiny. The red plastic has a gloss finish to it which fits in perfectly with the outrageous nature of this Valkyrie. The overall design is incredibly sleek and powerful looking. 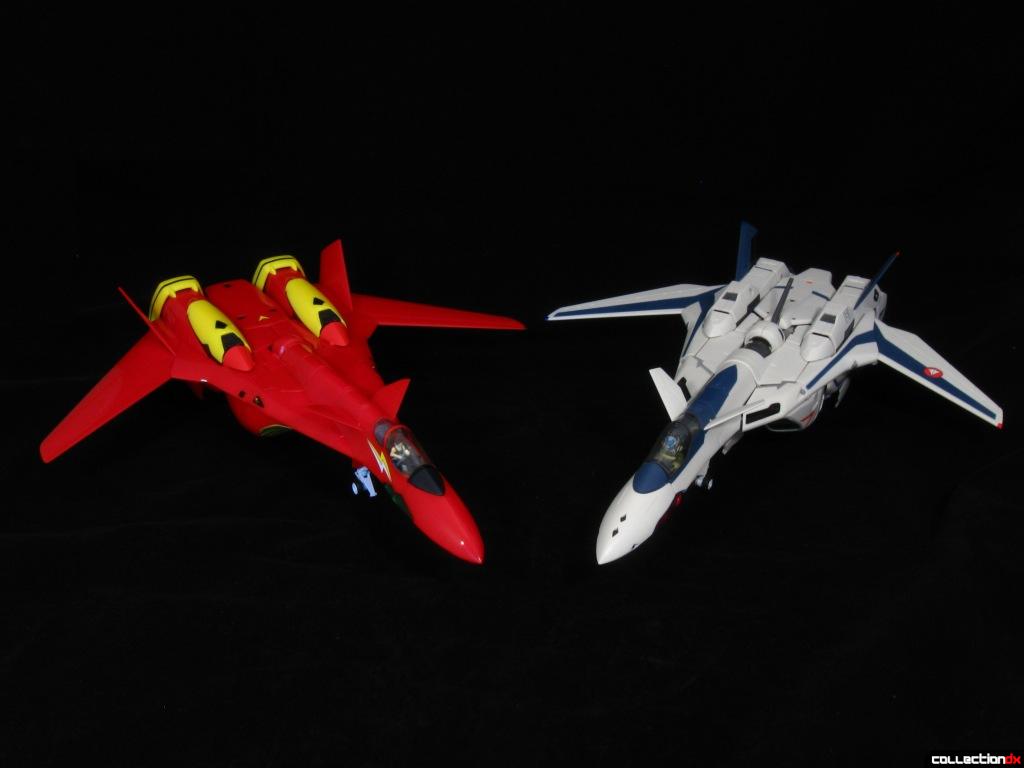 In Fighter mode, the Fire Valkyrie is roughly the same size as its predecessor the YF-19. Despite the outward similarities, the two toys share none of the same parts. 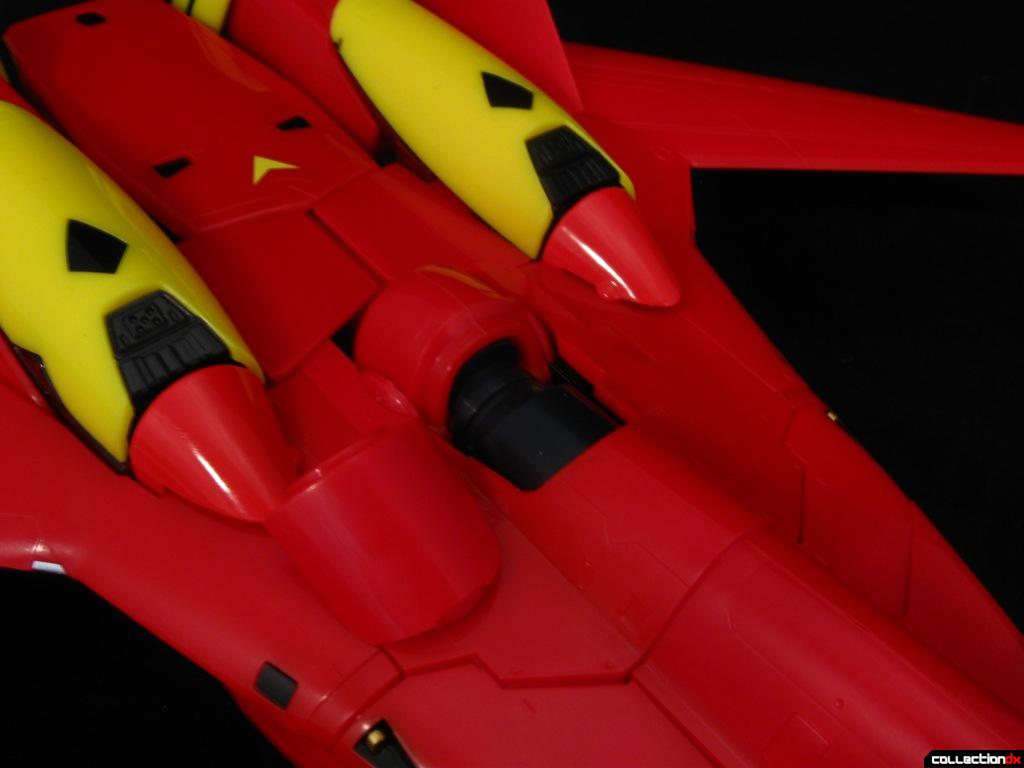 For Fighter and Gerwalk mode there is an optional cover piece for anime accuracy. This piece is not required for the transformation and personally I think the Fire Valkyrie looks fine without it. 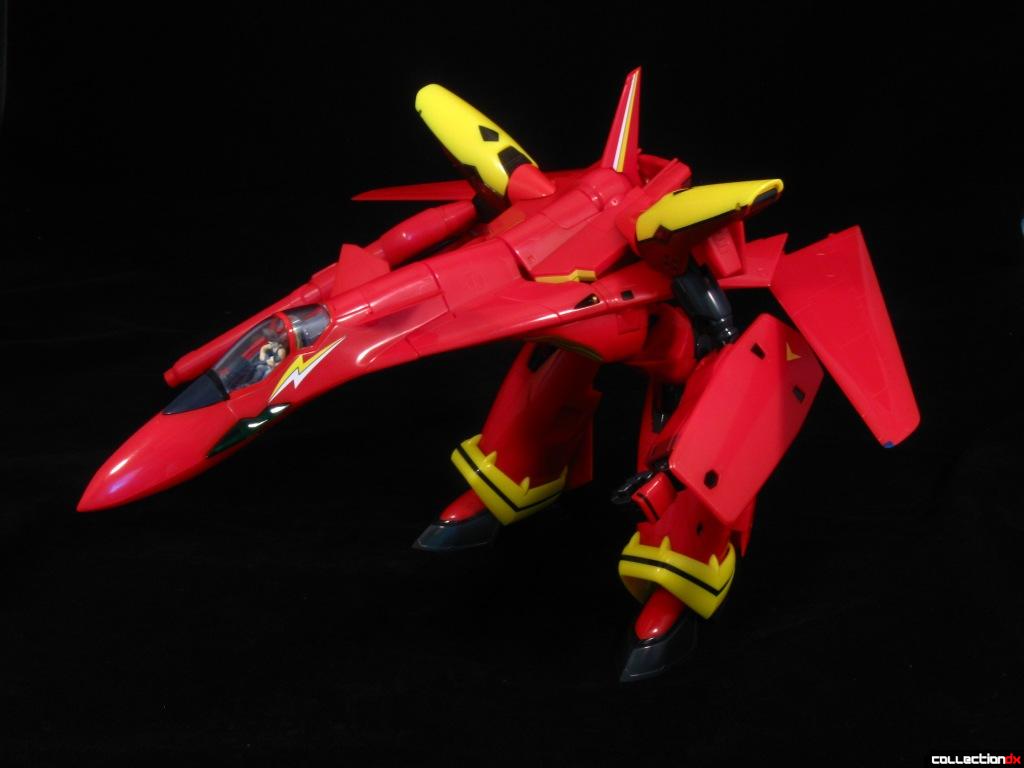 Transforming the Fire Valkyrie to Gerwalk mode involves unlocking lots of little tabs in the wings and legs but is otherwise pretty straightforward. This mode employs all the signature ratcheting joints as found on other Valkyries with the addition of ball jointed ankles. Also, unlike the YF-19, the Fire Valkyrie has a locking mechanism to keep the torso pegged in at the appropriate angle. 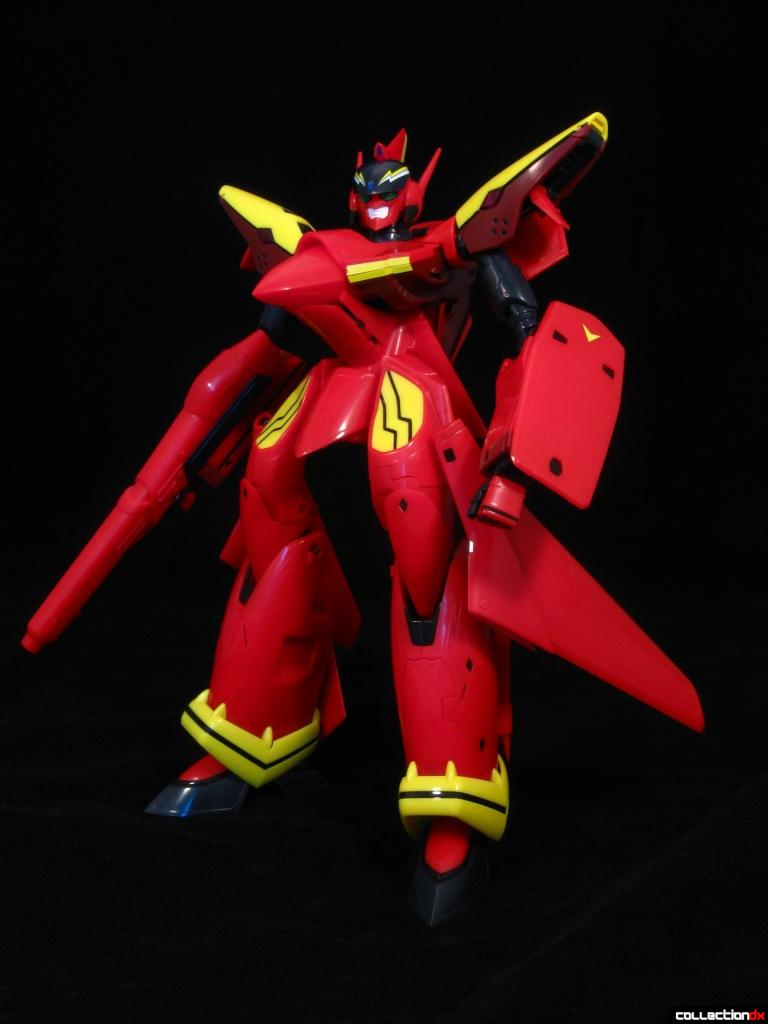 Battroid mode is amazingly well executed on this figure. While the transformation is fundamentally similar to the YF-19, the process has many additional touches to achieve a very solid Battroid mode. 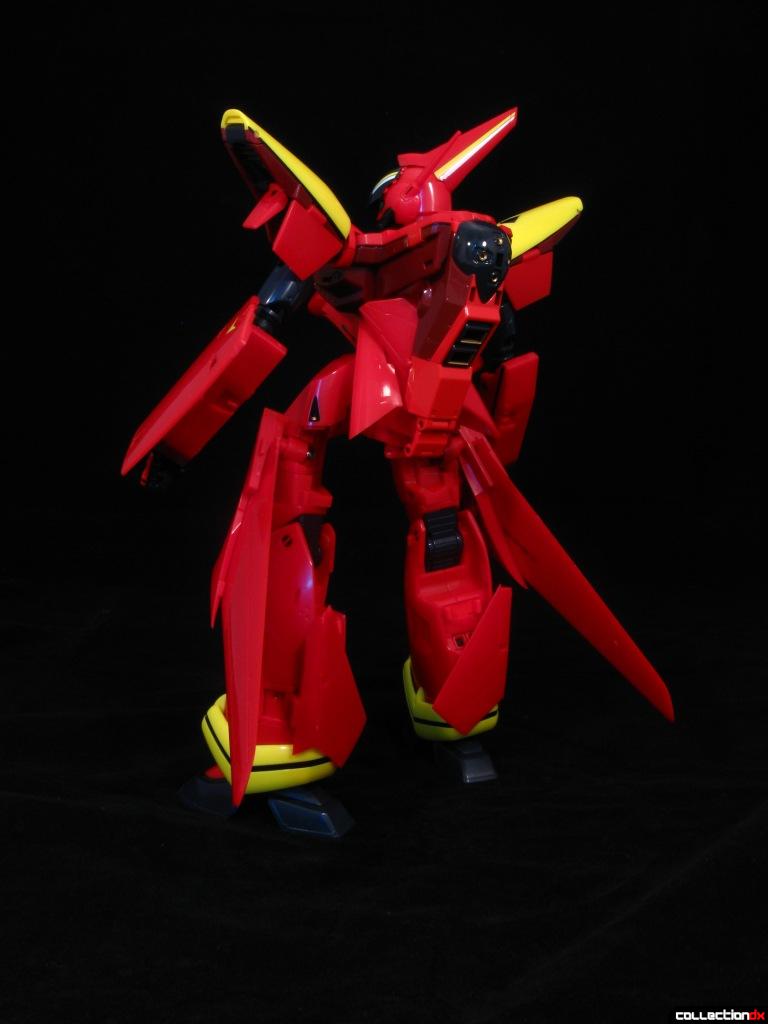 It is worth noting that unlike its brethren, the Fire Valkyrie has a significant chunk of diecast use in its construction. The entire rear "spine" is metal. 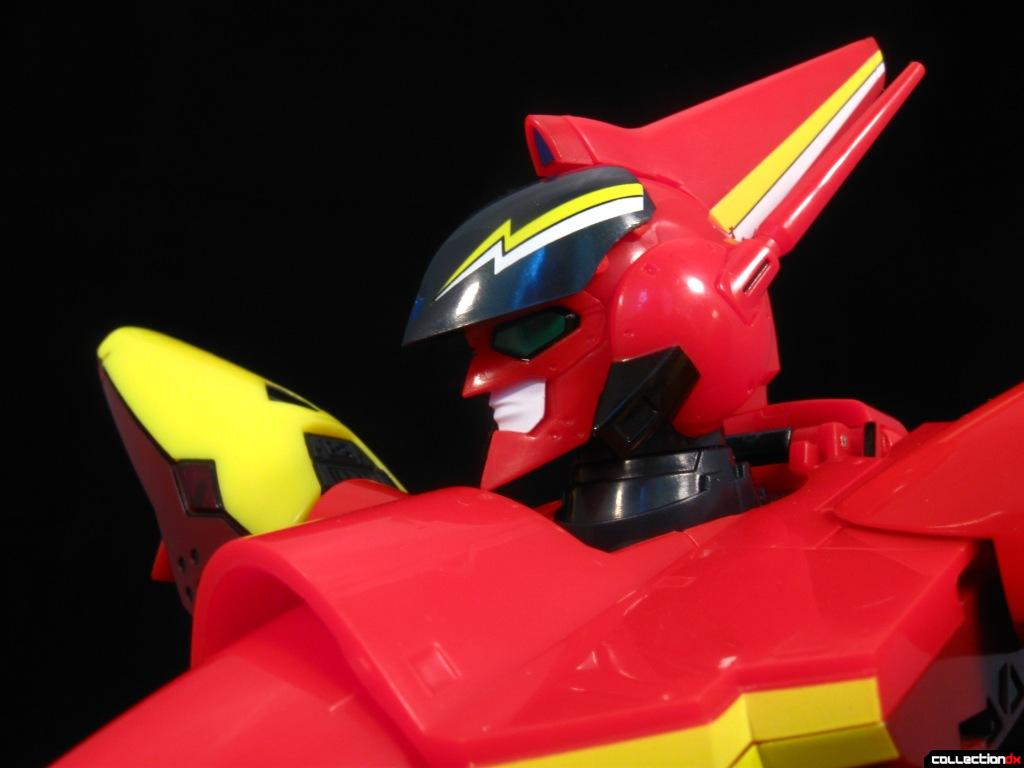 The head is beautifully sculpted and proportioned. 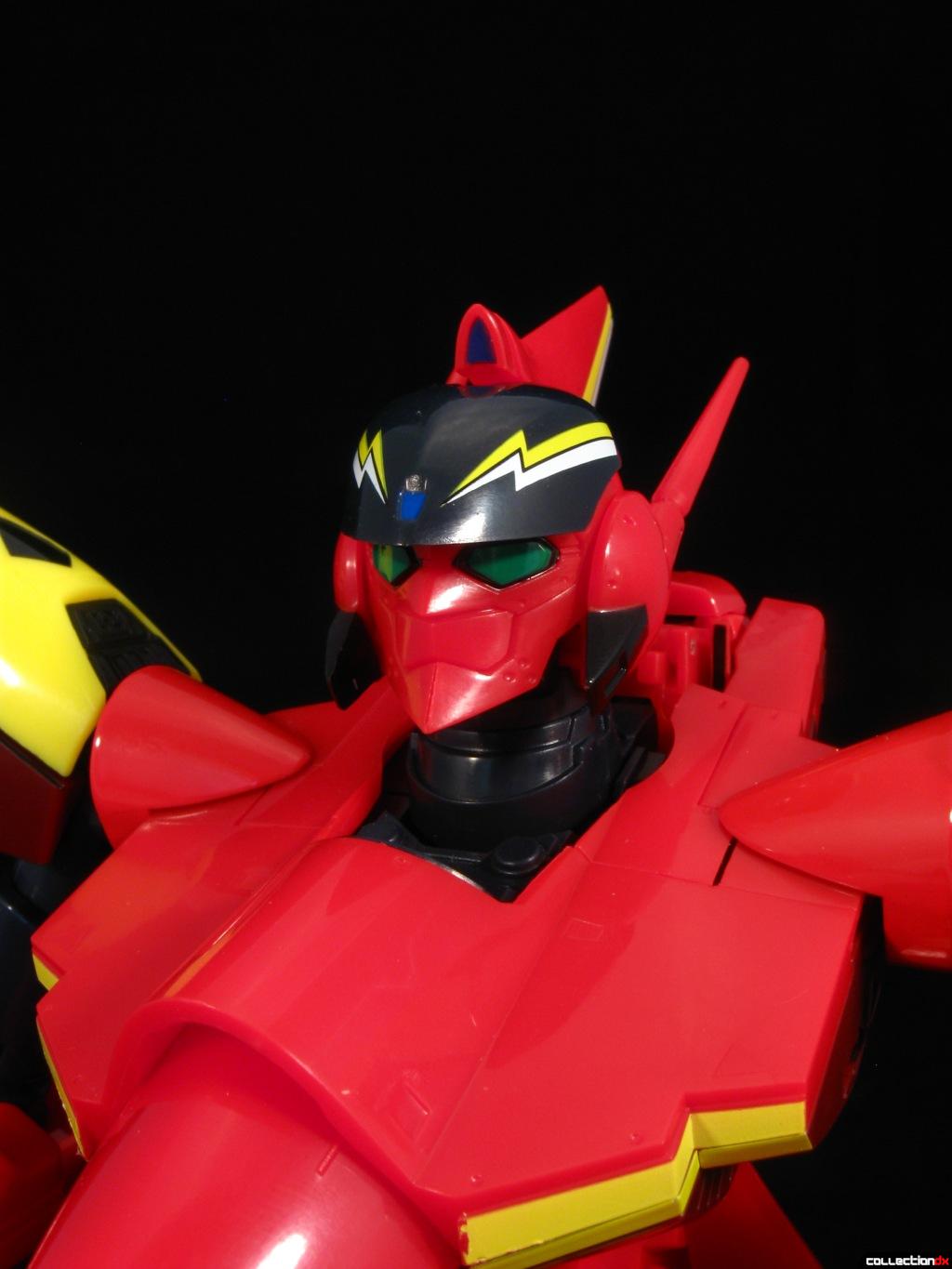 By pulling off the black forehead piece you can replace the face of the Fire Valkyrie to show the mouth-guard closed. 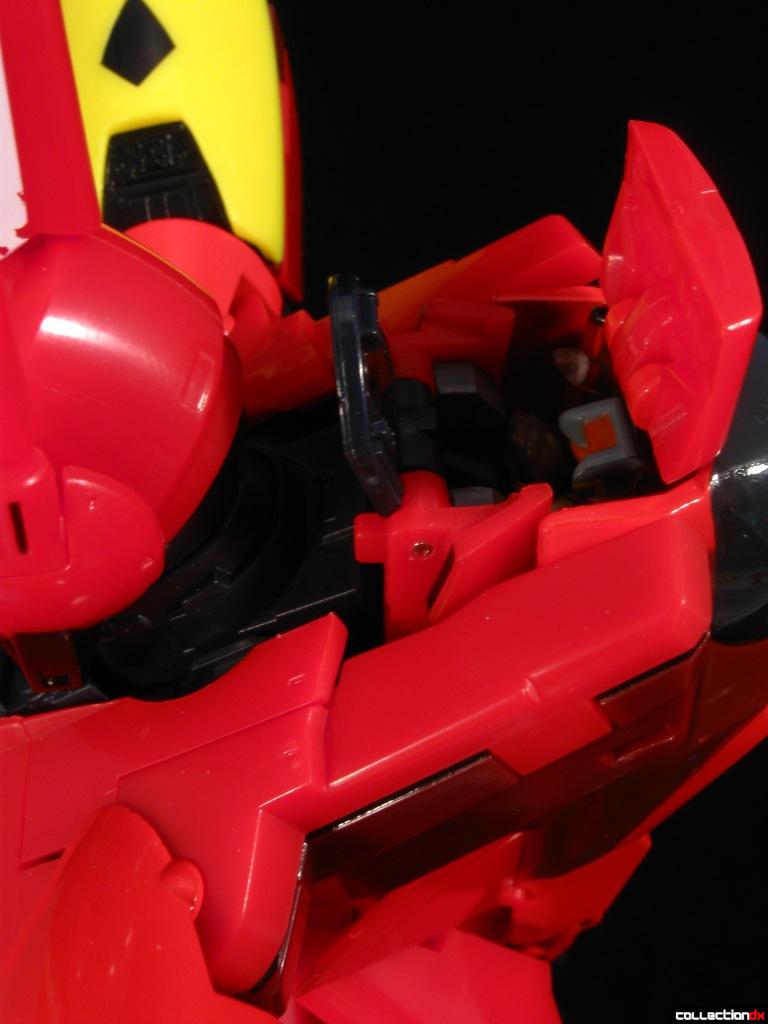 True to the anime, there is a working cockpit access hatch. 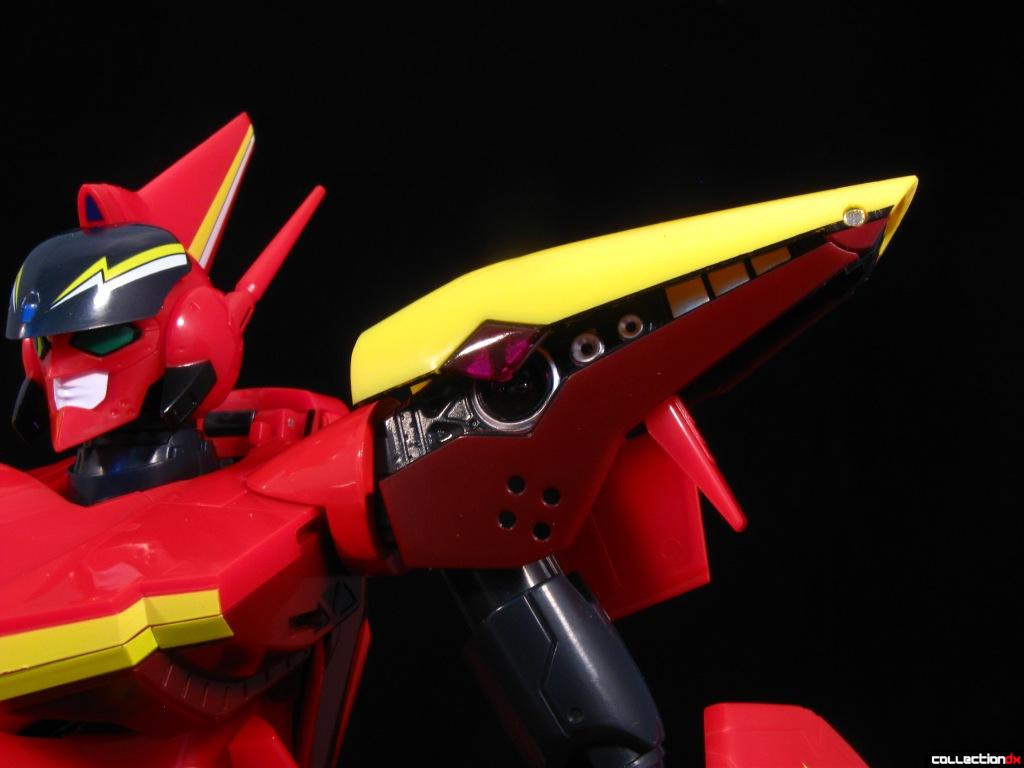 Each shoulder pad can be opened to reveal speakers. 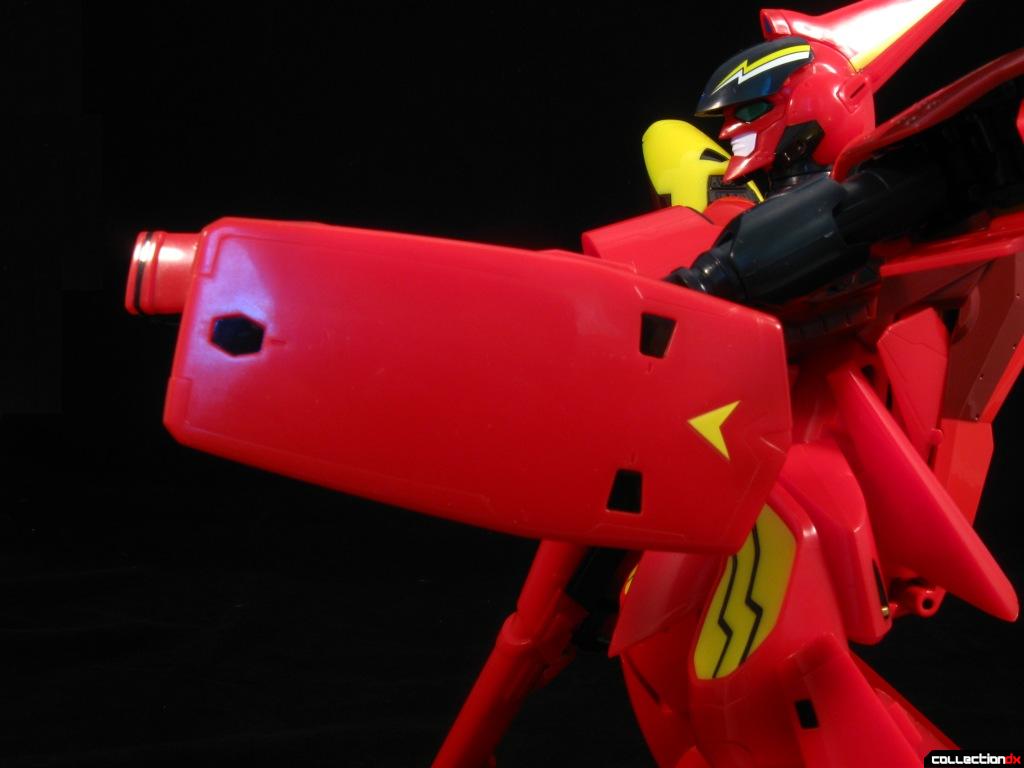 The Fire Valkyrie comes with two arm shields. The first is squared off and is used for the transformation. 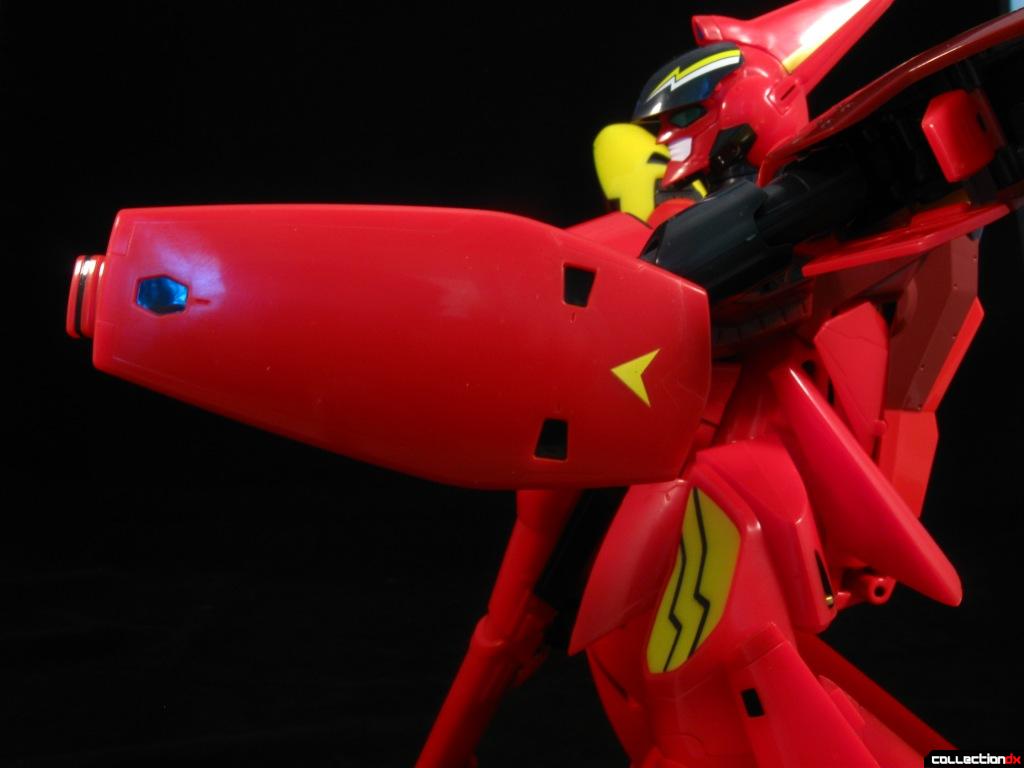 For Gerwalk and Battroid mode there is a more angular anime accurate shield. 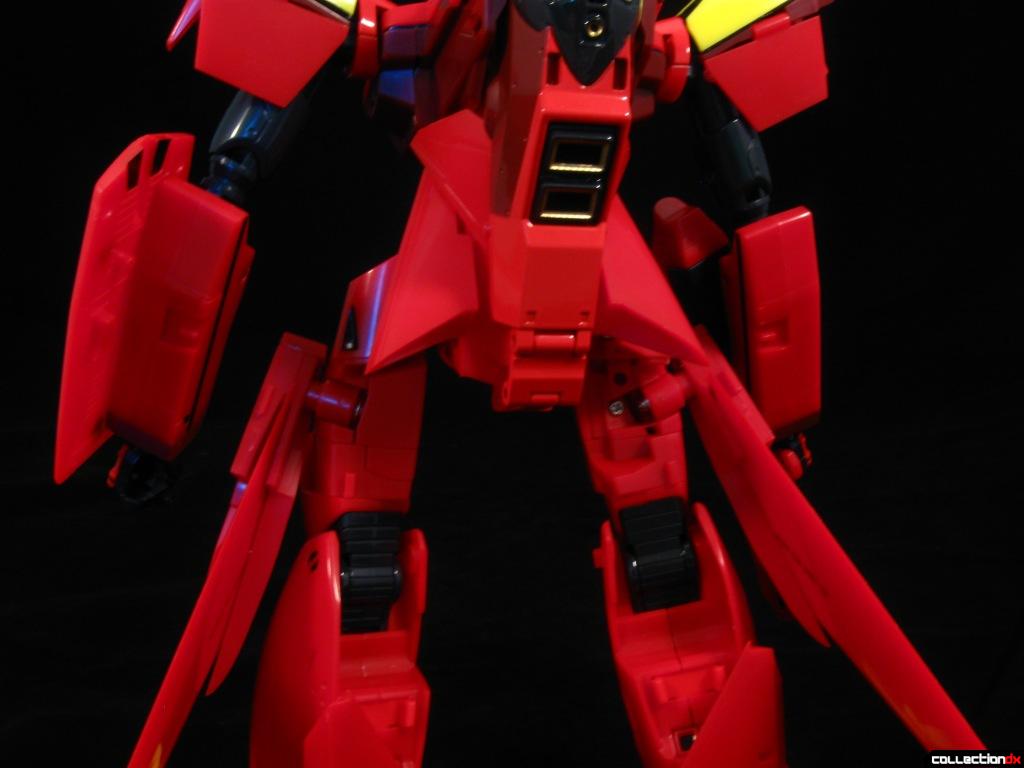 For aesthetics, the Fire Valkyrie has a pair of fill in piece for the thighs. The left thigh is filled in and the right thigh is normal. 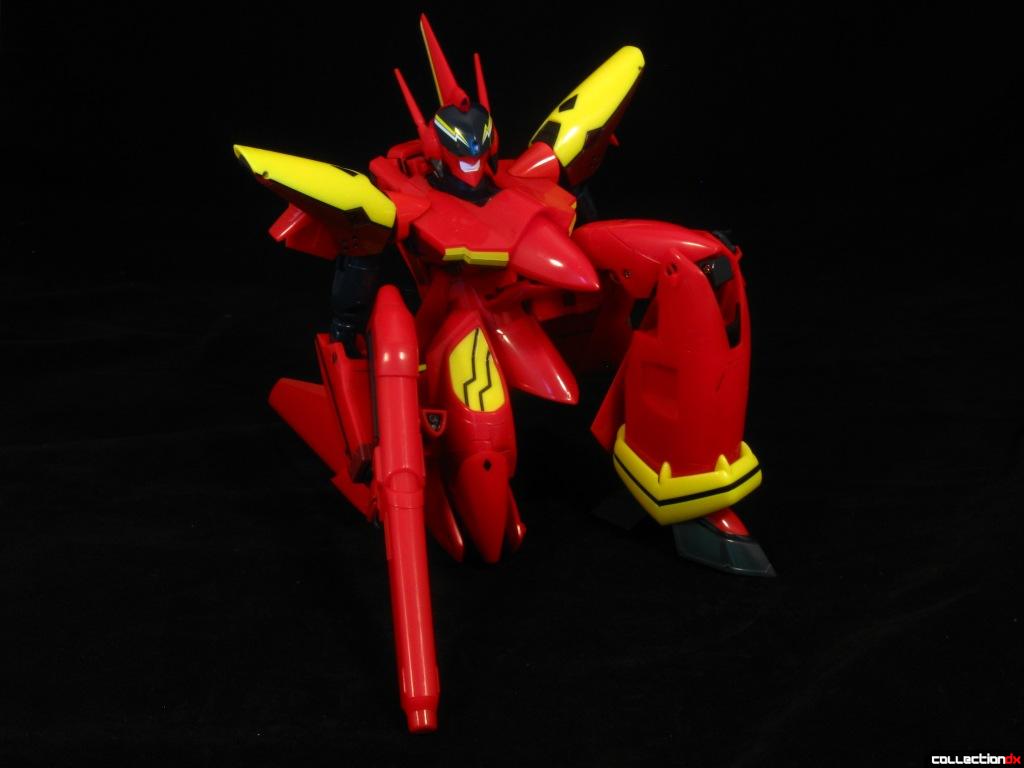 The Fire Valkyrie is very well articulated and can kneel with no problems. 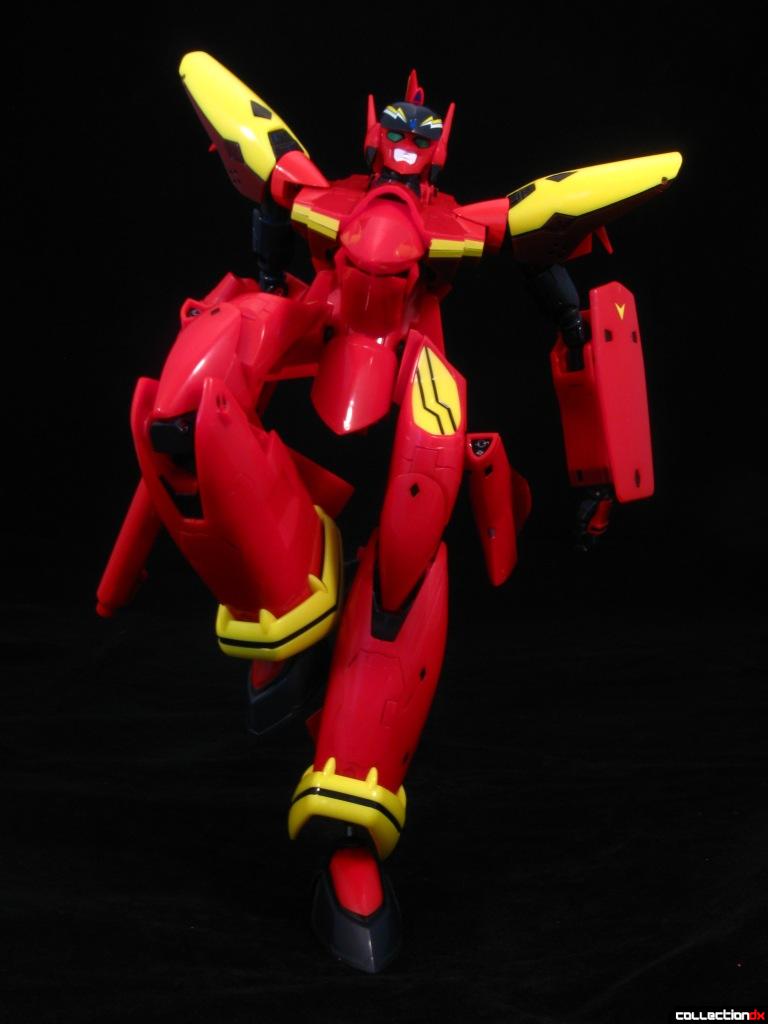 It is also stable enough to stand on one leg. 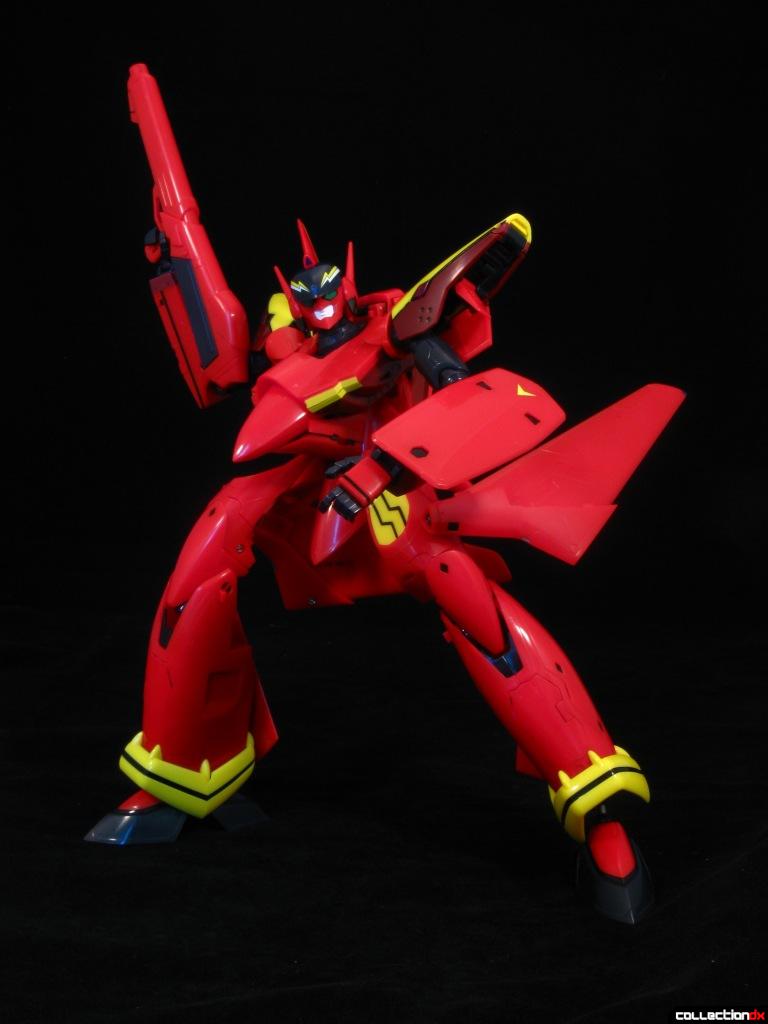 I can't say enough good things about this toy. All the modes look great and lock together solidly, the colors are perfect, and every accessory is well executed. This really is the best Valkyrie toy Yamato has made to date.

This looks awesome. Can't wait to get mine. Great Review!

Very nice toy. I'm not a fan of the color combo and will wait for the other variants.

I think I'll trade my Yamato Dyson YF-19 for this Fire Bomber.

no fire bomber samples.... meh.... lol on the bright side they made the transformation more fun!! but the deal breaker and the missed moment was having a few vocal samples on the speakers, come on yamato even the simple "listen to my song!!" sample would've sufficed!!

Hello all, I've been a reader here for quite some time, but haven't really ever spoken. I love the reviews, esp. the Macross ones. I was lucky enough to get this valk for a one-year anniversary present :) It's funny too since I've shown my gf Macross/ zero/ plus/ and now were on 7 and about 20 episodes in and she can't stand Basara, and says his name is befitting of him lol. Well personally the vf19 custom holds a special place for me, I didn't know what the hell Macross 7 was about when I first watched it years ago, but once I finished it, I too was humming Fire Bomber songs walking down the sidewalk. So to not only get a valk, but this particular one proves that she loves me lol.

1. My ankle joints on mine were extremely hard to move, I felt like i was going to break the plastic parts of the foot before the metal joint would free up. Then once I made it move a little into a full foward position, the joint felt like it totally freed up and was loose. Moving it back into gerwalk position though, it gets so tight that I fear breaking it. Is this the same for yours?

2. Where am I suppose to put the stickers on this thing? The sticker sheet has #'s as though they are intended to go in certain areas but no guide to applying them was included with the toy. Did they leave something out of my box?

I suppose that's all,

Keep up the awesome work gentlemen.

wish I could help, never own one...maybe email the guy who made the review instead of just a post...good luck.

While I do like the design of this figure, the red plastic used aggravates me. It's not that I fear the plastic breaking, it's that it is a soft, oily plastic.

The red plastic is soft, so this figure is prone to nicks and scratches, especially on the wings which are thin and sharp. This disturbs me greatly, because I do not see why the wings couldn't have been as thick and beefy as the 1/60 VF-1's wings were. I mean, they are the same scale and the VF-19 is a far bigger jet.

I cannot handle this figure without having to wash my hands afterward. The residue it leaves on my hands is intolerable to me. It's fine enough while messing with the figure, but when I'm finished it drives me up the wall. The first day I got the figure I played with it nonstop and the entire day I kept feeling pissed off and unwashed, despite being clean.

I would have preferred Bandai used the same plastic as on VF-1. It was harder and it was not oily. That it was a more brittle plastic would not be not a problem, as even the VF-1 was extremely sturdy, except for the arms on the early releases, which were because the plastic was too thin. The VF-19 has no load bearing parts that small that are not die cast, so there would be almost no added risk of breaking.