While there have been many toys made of the iconic Godphoenix from Science Ninja Team Gatchaman, there have been few of the hero’s main ride  - the G-1. But lest we get too lost in translation, let me break it down to you Battle of the Planet’s style.

See, Mark is the leader of G-Force, a team of teenage heroes out to fight against Zoltar. In order to keep his identity secret, Mark flies around in an old single engine aircraft while wearing bell-bottom jeans and a rad wristwatch. With the shout of “Transmute!”,  Mark’s wristwatch transforms him into the eagle-themed superhero and his plane transforms into the futuristic G-1 jet.

At least, that’s how it was when I grew up. And as a BotP fan in the states there was ZERO merchandise available stateside, aside from what was teased in the Mr Big’s Toyland commercials. So while I and millions of children loved the hell out of this show, none of us had any toys from it.

In Japan however, there were a few toys of the G-5 but it seems like the supplemental ships got the shaft. You had the Jumbo Grip, the model kit, and the Banso plastic one, but that was it. And after that – nothing. The G-1 got neglected for years until Fewture Models decided to show it some love in 2010 with a three pack consisting of the G-1, Red Impulse and G-2. However this set was expensive and sold out quickly so I was unable to grab one. It wasn’t until 2012 that the G-1 was reissued as a “Repaint Version” and I was able to obtain one.

It’s worth noting that the repaint version includes ONLY the G-1 and not the other ships.

Lets check this out.

The box is nice and sturdy but feels light, which is not a good sign for an EX Gokin. There’s nice metallic printing on the front, and the usual glamour shots on the back. Open it up and you get a great Styrofoam tray. 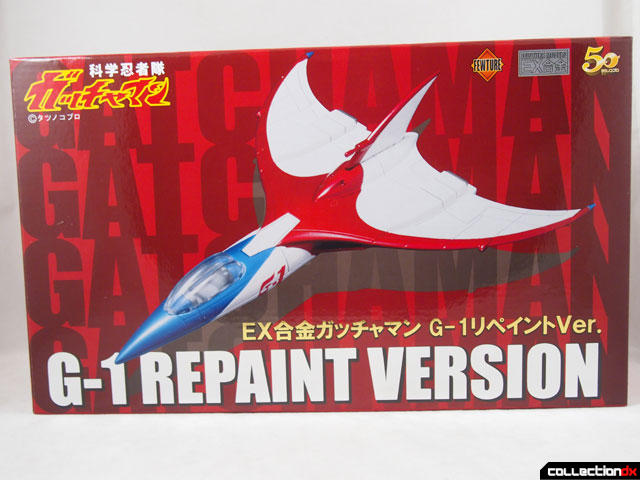 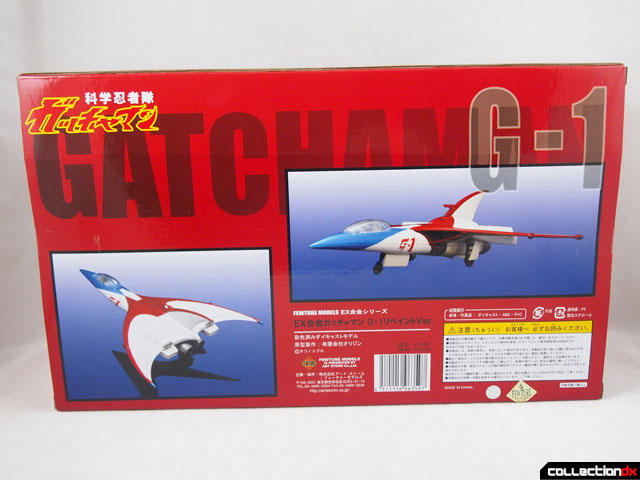 Releasing the ship from the tray the first thing I feel is that this is in fact very light. It is also in fact very small considering the size of the box. The G-1 is only 6.5 inches long and easily rests in the palm of my hand. Right away, that’s a bit disappointing. But still, it’s a smaller ship so maybe we can forgive it. 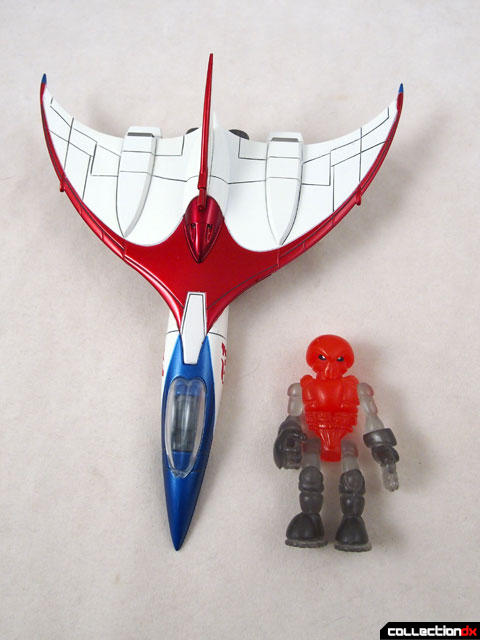 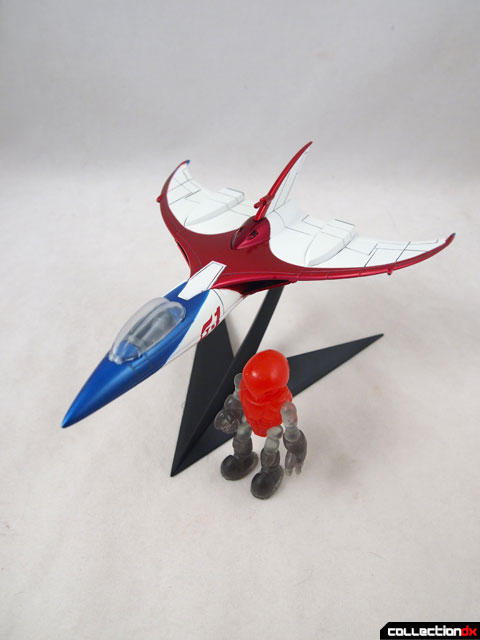 The diecast content is actually very substantial, with most of the ship being metal. Small parts are plastic here and there, but most is satisfyingly metal. 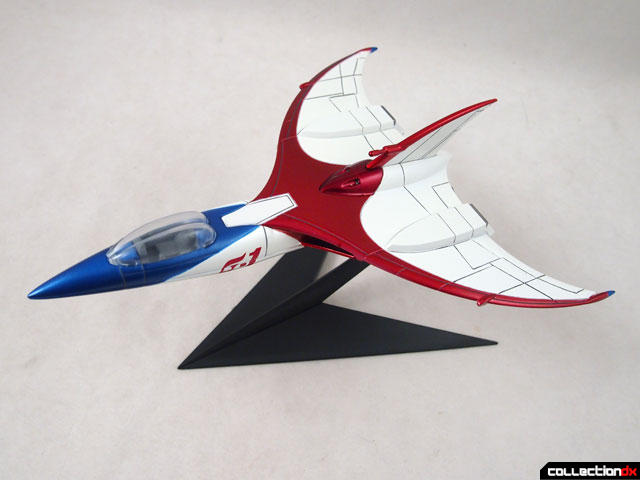 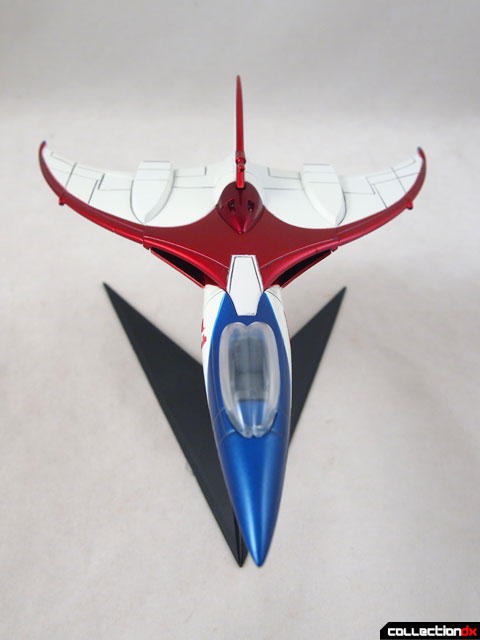 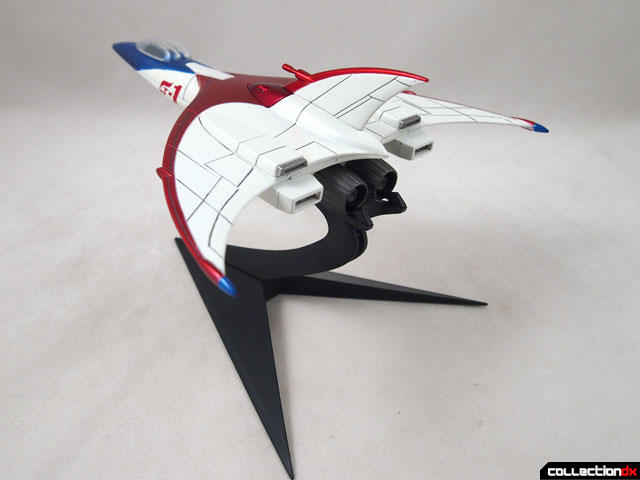 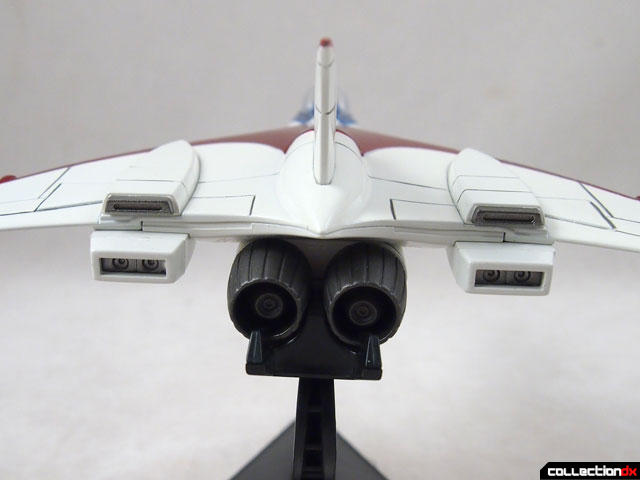 Paint is nice, if not thick in certain places. This being the repaint version, the paint now has a metallic tint to it – the only difference from the original. Panel lines and logo are nice and sharp. It’s an exquisite replica with decent proportions and nice attention to detail. 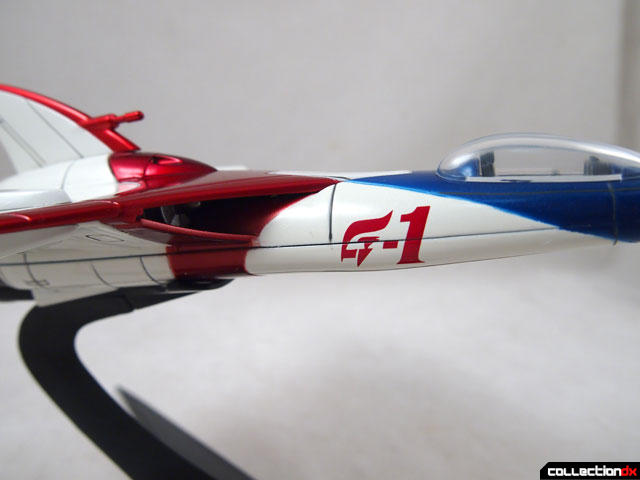 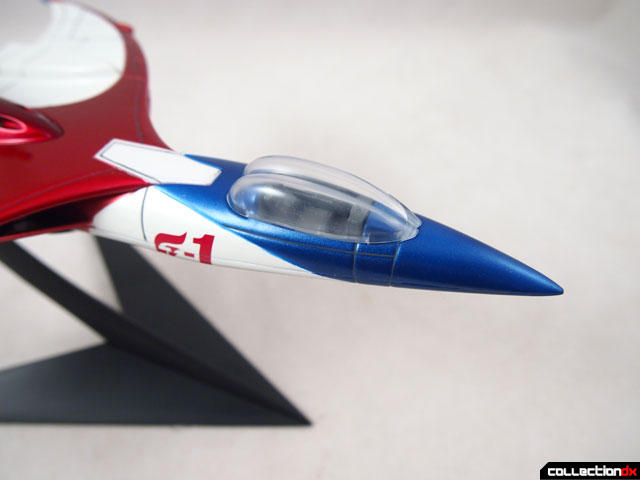 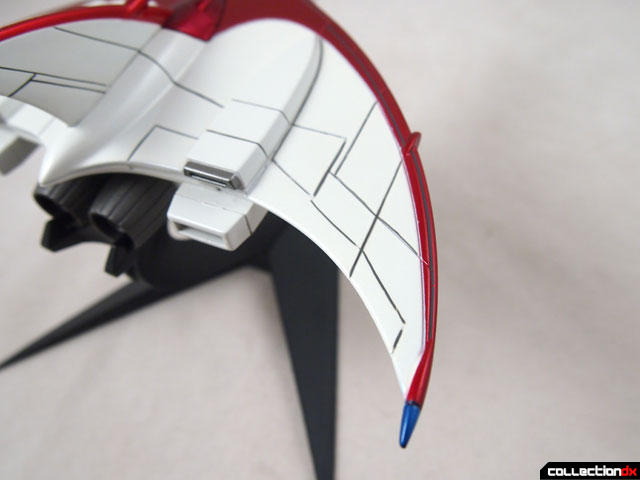 The small cannons on the fin are represented, as are the turbines buried deep in the wings. 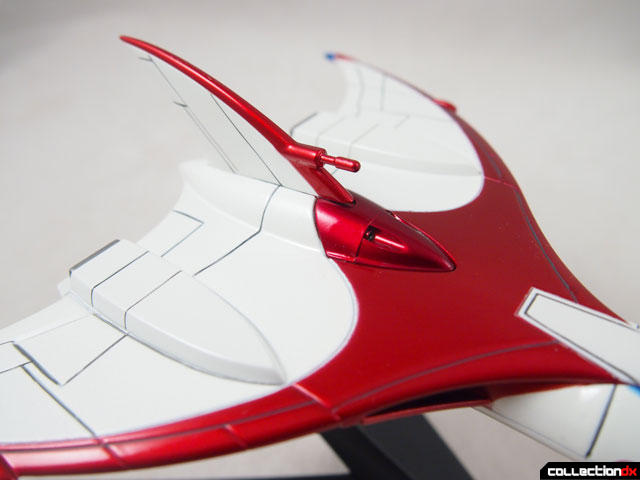 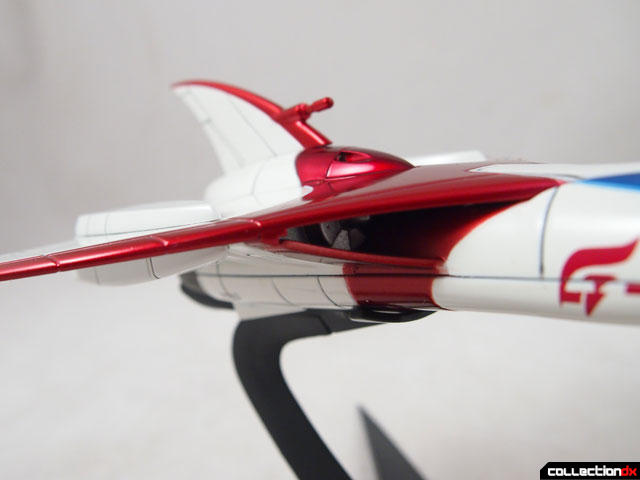 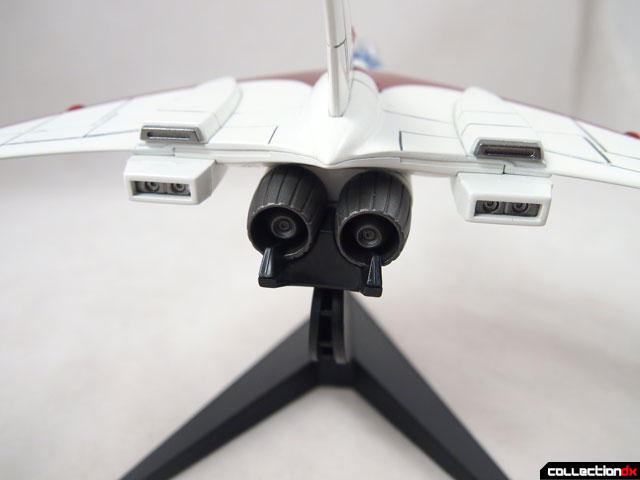 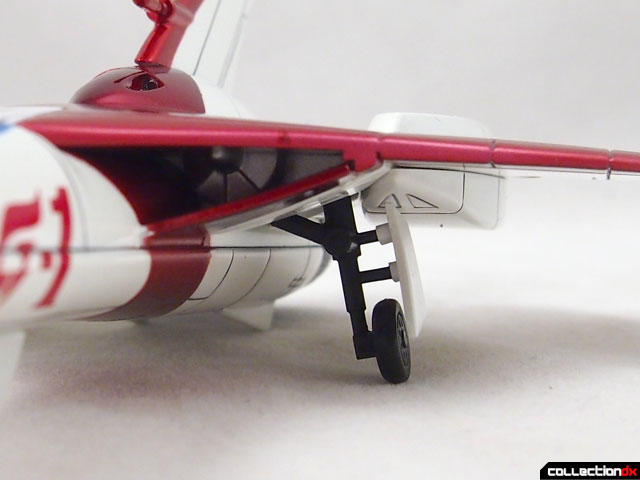 One drawback is the landing gear, which must be attached manually. You need to pry the panels off the wings and open the door under the nose. There you can attach the landing gear – that is if yours is packed with the proper gear – which mine was not. 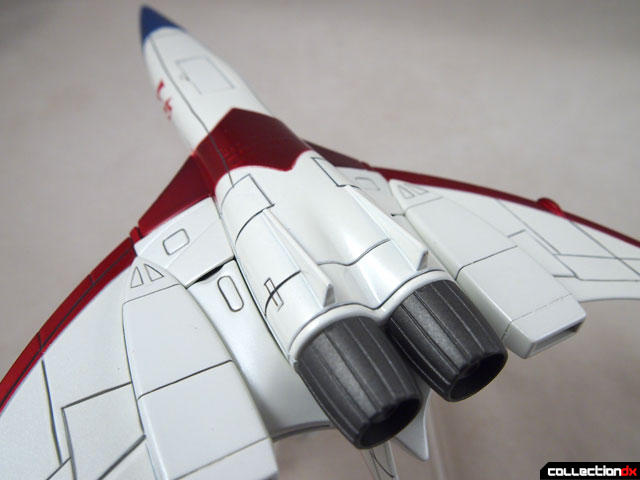 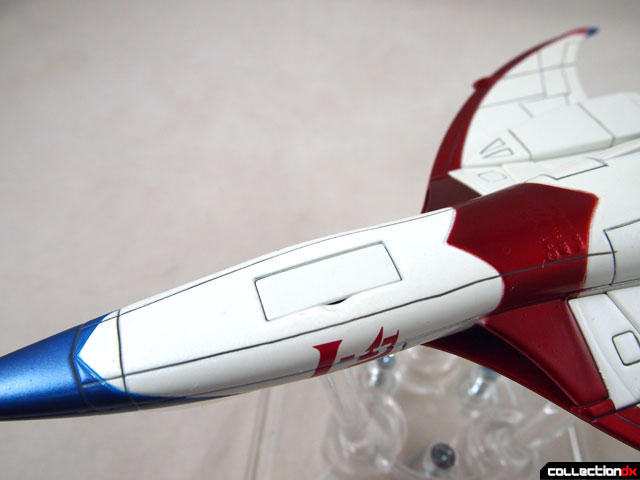 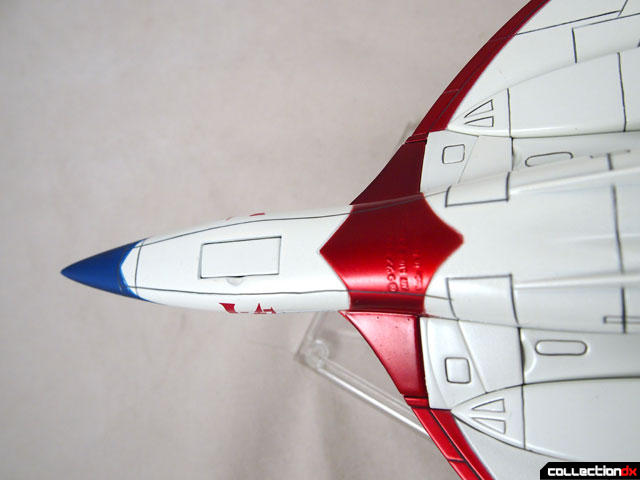 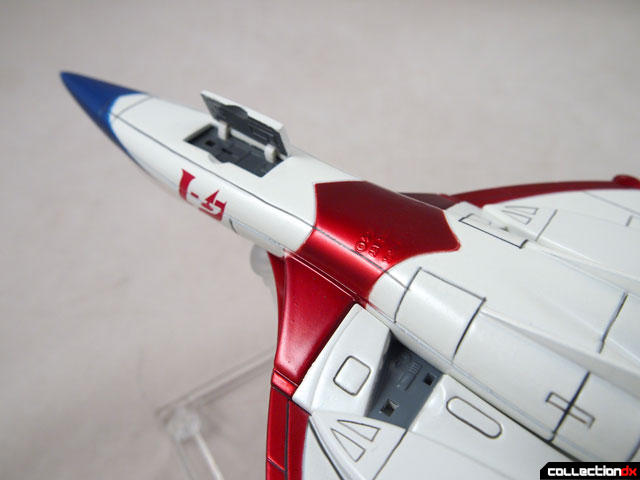 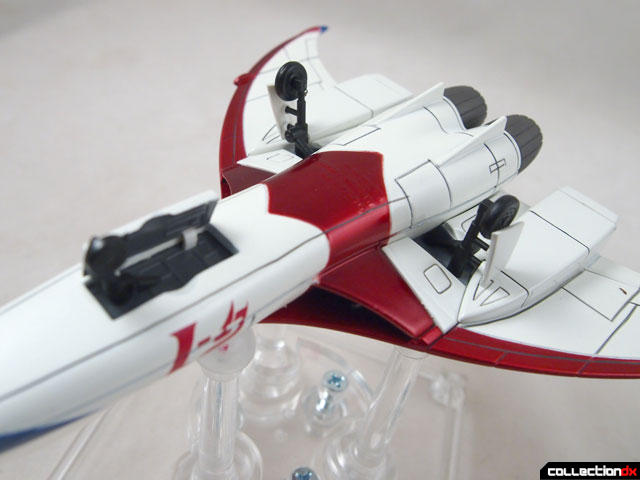 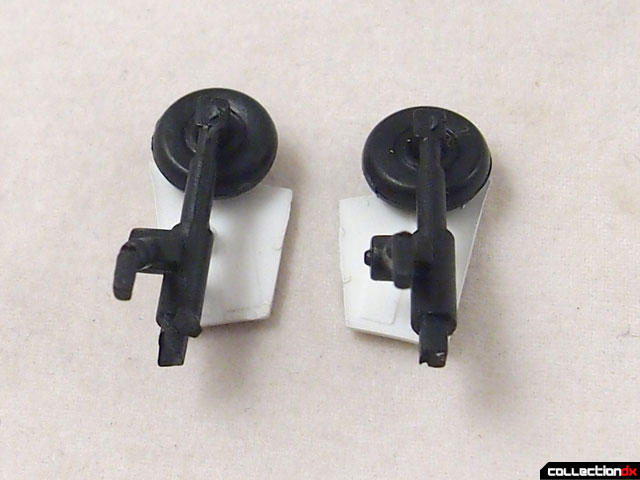 Yep – I got two of the same landing gear, but with the right door parts attached. The way the holes are in the ship you need to have opposite landing gear for them to plug in fully. Very disappointing for a $100 toy. 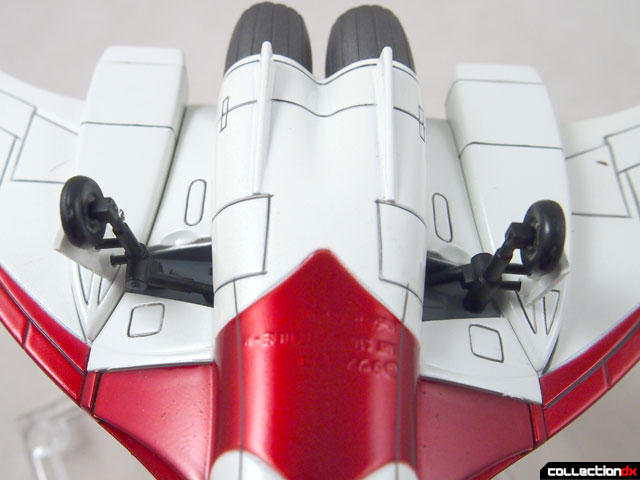 You know what else is disappointing? That’s all there is to it. There are no accessories. No gimmicks. NADA. In the show – this had wings that folded in. This is certainly big enough to add them. There is more than enough for landing gear to fold out – why not do that? How about an opening cockpit with a mini pilot figure? Nope. The wheels on the plug in landing gear don’t even roll. They are just undetailed pieces of black plastic. 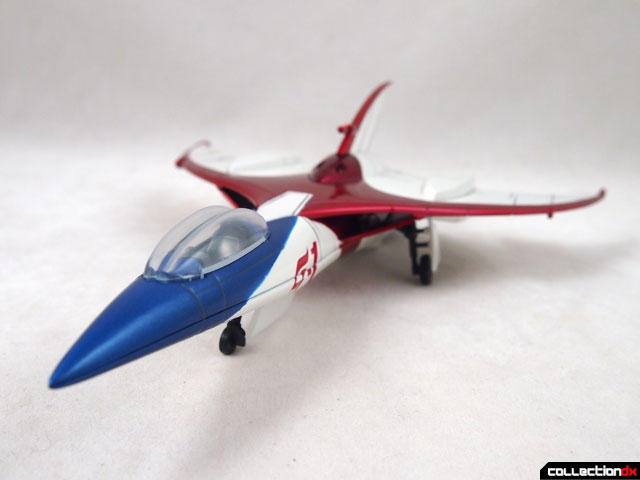 A stand is included, but there’s not much to say about it. There’s no printing or logo on it. 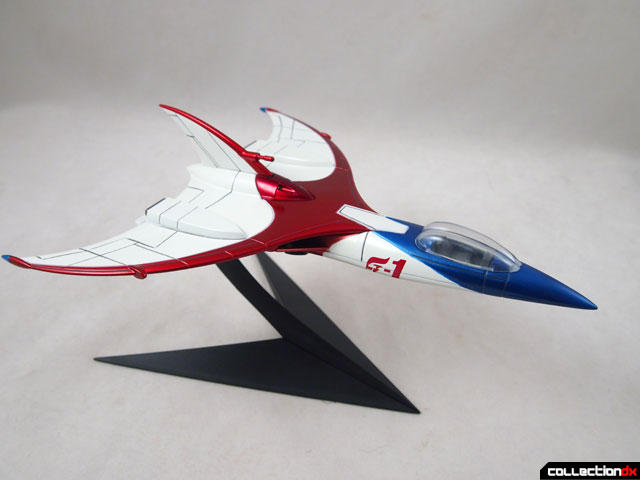 While I am let down by this, I don’t hate it. It makes a phenomenal display  piece for the shelf, but it costs too much and does too little. However if you think this one failed to meet my expectations, wait until I show you the Godphoenix repaint…

Looks like an average Hot Wheels release, not particularly bad but certainly not $100 either....

probably made in the same factory as well....

Yeah... I got one of these too and there's just not that much (if any) bang for the considerable buck you're paying. A TON of missed opportunities, but hey, I knew this going in based on the few reviews of the 3 Piece Set... basically a good looking diecast rendition of the vehicles with little to no play functionality. If Fewture releases individual re-paints of G-2, G-3 and G-4 I'd probably bite also since there's not much else of a choice out there for Gatch gokins... unless you hedge your bet that Bandai will get around to doing these down the road.

I'm with Harvey, I would also get the other vehicles if they decided to release them again.

It's a really good objective review, Josh. The landing gear and non folding wings are pretty lame. But I've always wanted a die-cast version of the gatchaman vehicles. It does look pretty awesome next to my other Gatchaman toys.

BTW, I just noticed that one of the plugs that hides the screws on my exghokin god phoenix fell out. I just glued it back in but beware. It'd suck to lose a piece like that.

I have the two sets, and was actually quit pleased with Jinpei's(Keyop's) G-4 buggy. Rubber treads, moving wheels, opening mouth... It was as if Fewture worked hard on the ground vehicles then rushed the hero vehicles into production.
I love them, but sheesh... They really missed the boat on the G-5 and the G-1!