I admit I don't know anything about Saint Seiya, or Saint Cloth myth in general. Adam usually does these reviews, but he has been begging me to check one out and finally forced one on me. I'm glad he did, because it's really cool.

I have no idea who Megrez Alberich is. I can barely pronounce it. According to Adam, he is a bit player in hte Asgard Arc, which only appeared in the anime, not the Manga. The Asgard are the Norse pantheon of gods. They refer to their armors as "robes" and not cloths like Athena's Saints.

Wikipedia says this about the character:

" Descendant of an important family of warriors and scholars in Asgard, Alberich was famous by his intelligence and cleverness, as well as by his cold heart; his own fellow warriors didn't trust him, and Hilda herself lectured him often. He was the only witness of the Hilda's possession by Poseidon's Nibelung ring; taking advantage of this war, he planned to conquer the world. He defeated many of the Athena's Saints (including Marin), encasing several of them in life-sucking giant amethysts; however, Shiryu with the help of his master Dohko finally defeated him. He was one of the most shrewd, sly Saints as he could do the nature fight for him and used his intelligence to avoid fighting.

Named after the Norse mythical king Alberich of the dwarves, a sorcerer who guards the treasure of the Nibelung. "

And if you are anything like me, you have no idea about any of what that means. it's as if the prior paragraph is written in some other language.

However, I do speak the language of toys, and this is a fine toy.

Like all Saint Cloth Myth toys, they come in an exquisite book-style box. The halves of the box are held together with velcro, and on each "page" you can see all of the included parts. At first the amount of parts looks overwhelming, but once you get it all out you realize everything has a place to go. 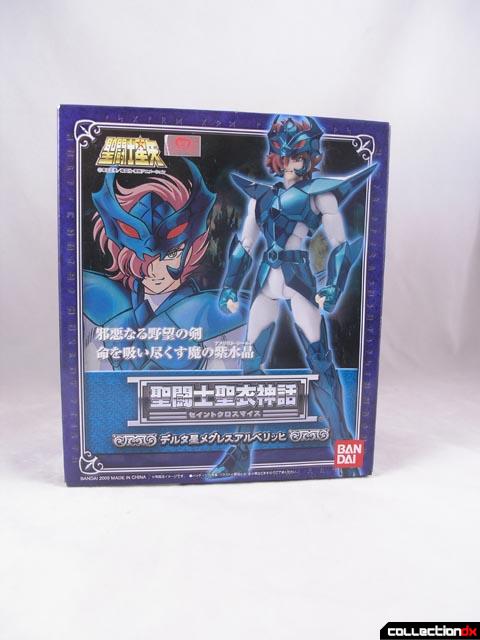 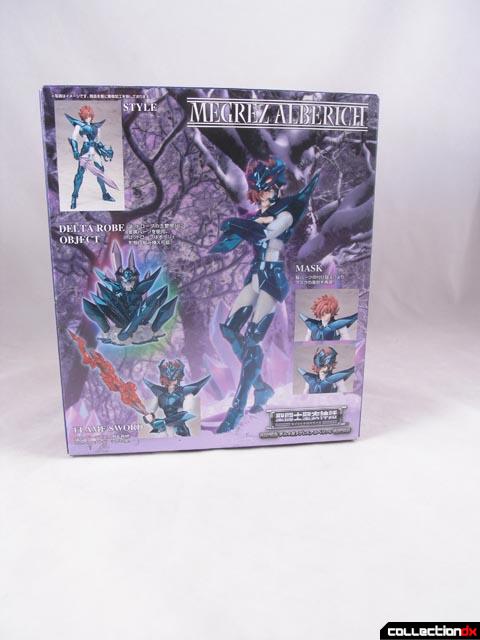 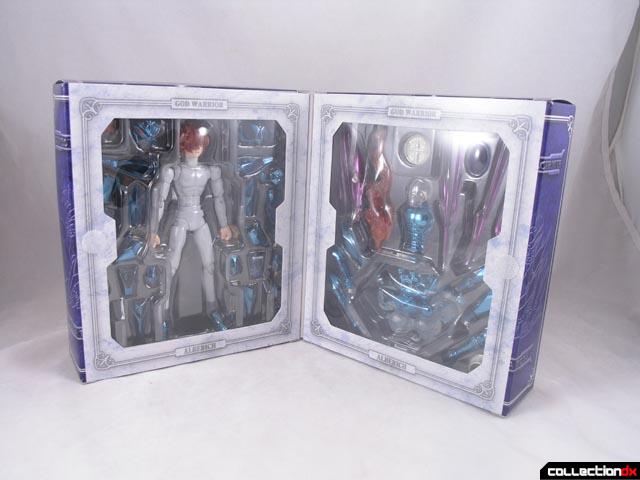 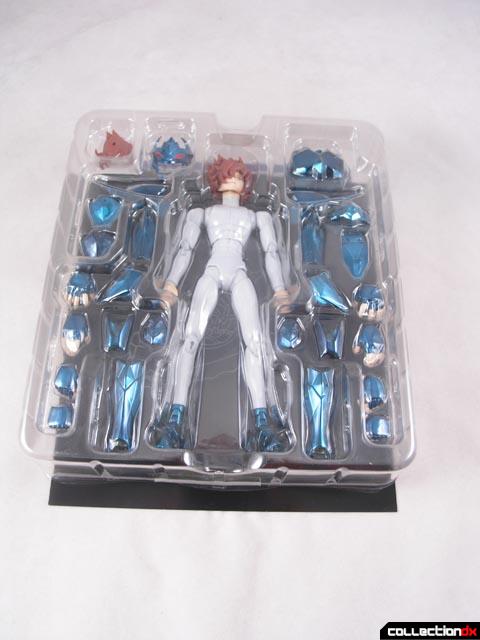 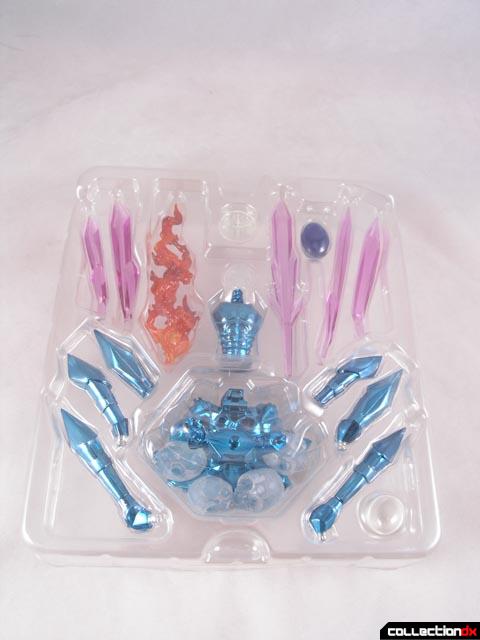 The core figure of any SCM is essentially the same, at least in terms of construction and articulation. The tall lanky form is made out of plastic and is extremely articulated. Only the feet are diecast when un-armored. 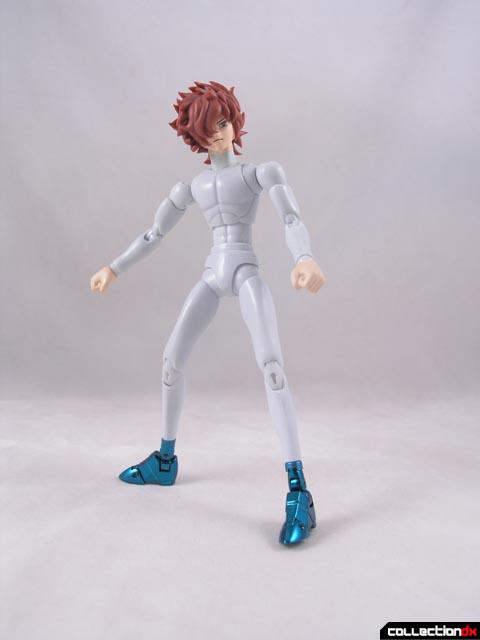 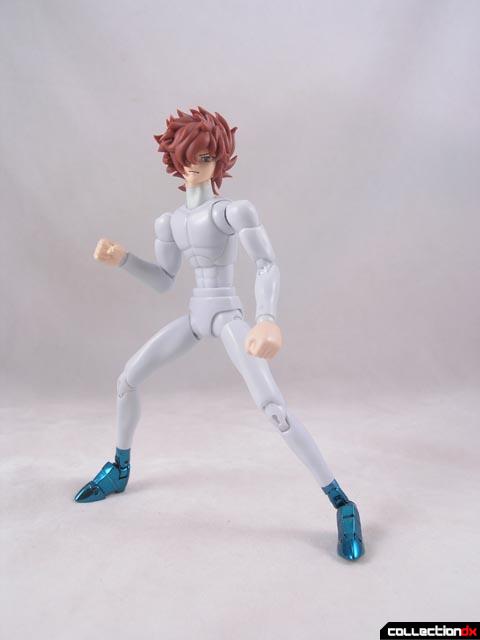 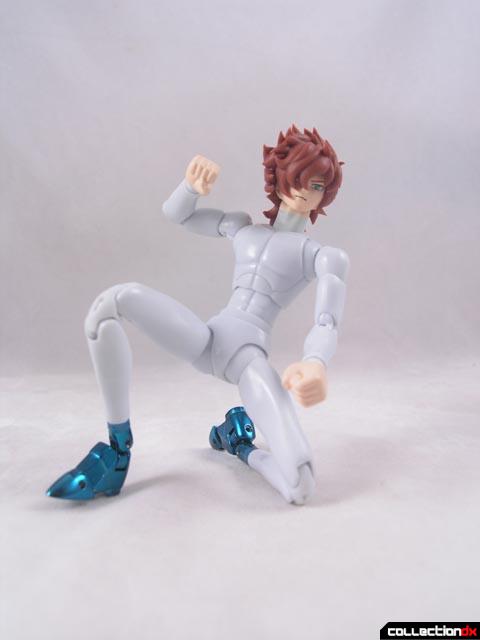 Of course, the main reason for these things is the armor. Each piece of armor is specifically fitted to this figure. Some parts just hold on with friction, some plug into holes around the figure. 90% of the armor is metal, giving the figure a satisfying weight. 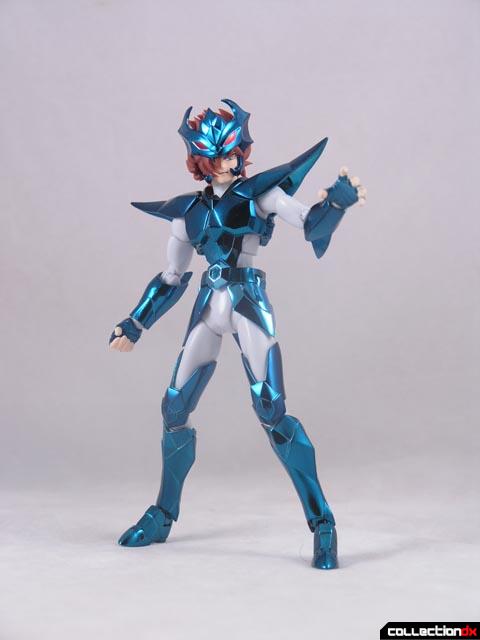 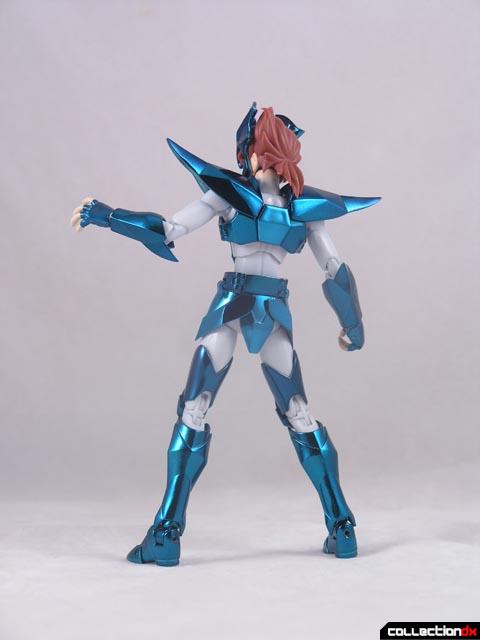 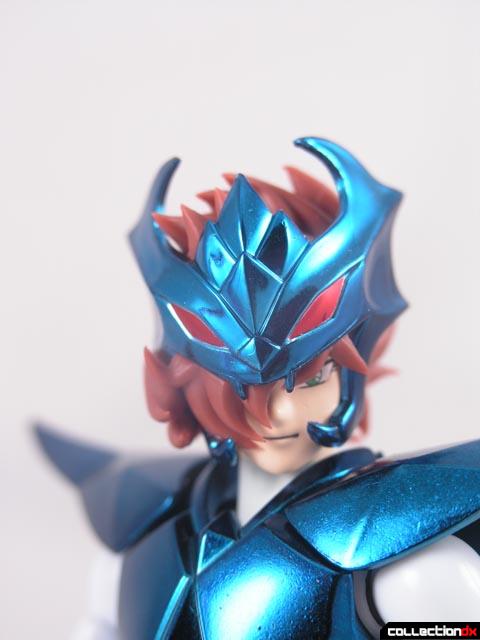 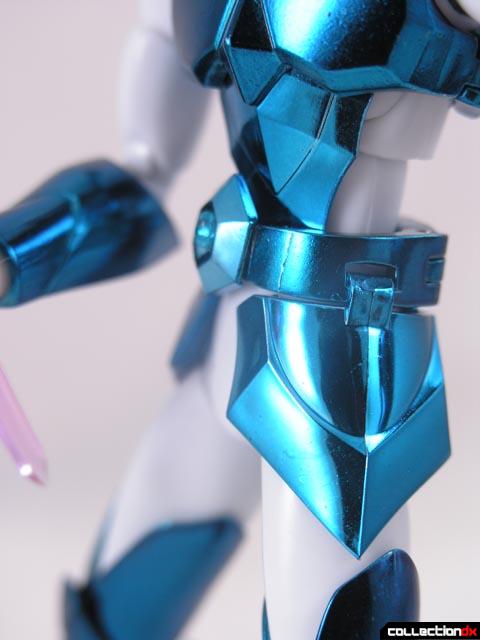 As this is one of the less ornate SCM figures, there's more poseability than most with the armor on. However, it is still nowhere near what the unarmored form is like. 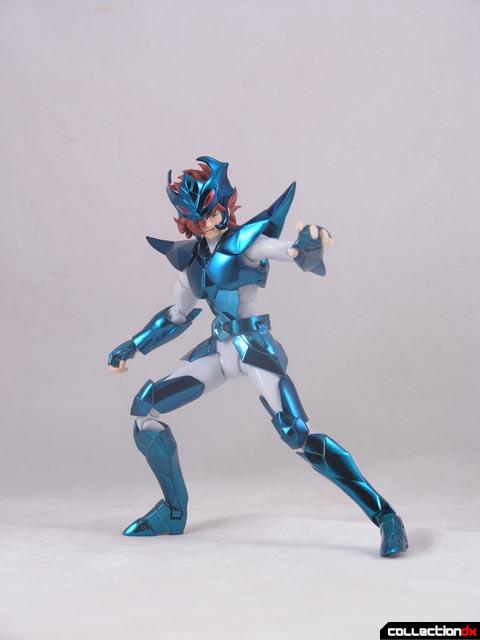 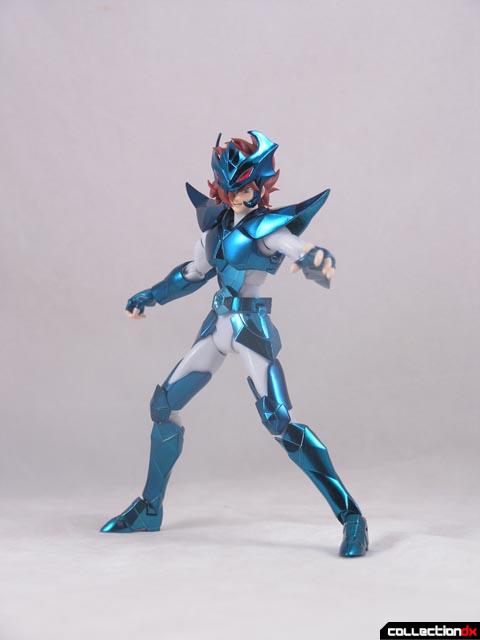 Each SCM comes with a stand called an "Object". The purpose of the Object is to hold the armor parts when not in use. I like the look of this Object - all covered with crystal skulls and spikes. Most of the armor attaches to the spikes, making for a seamless integration. It's all pretty menacing actually. 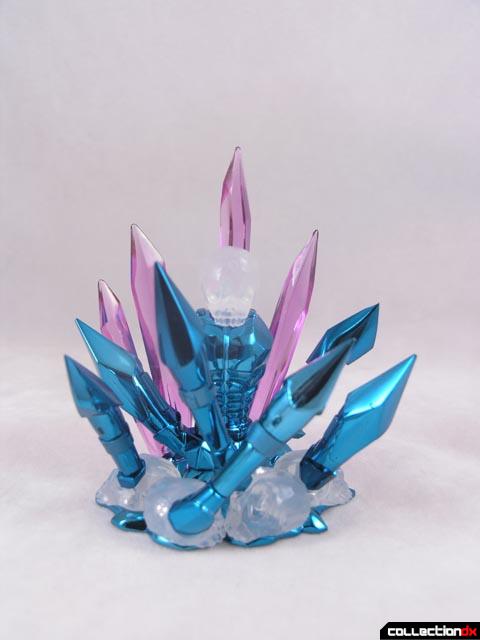 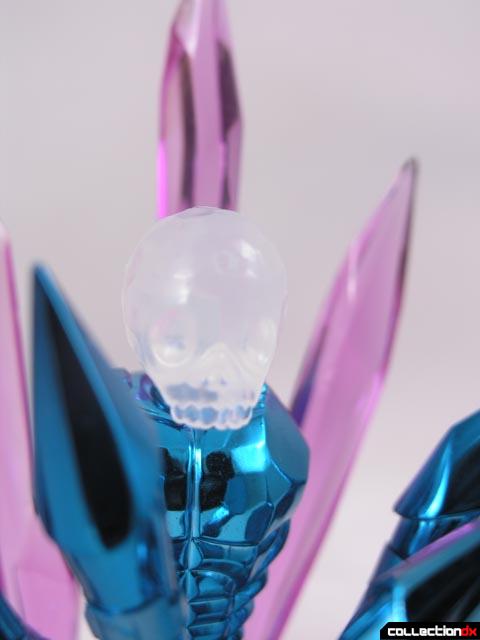 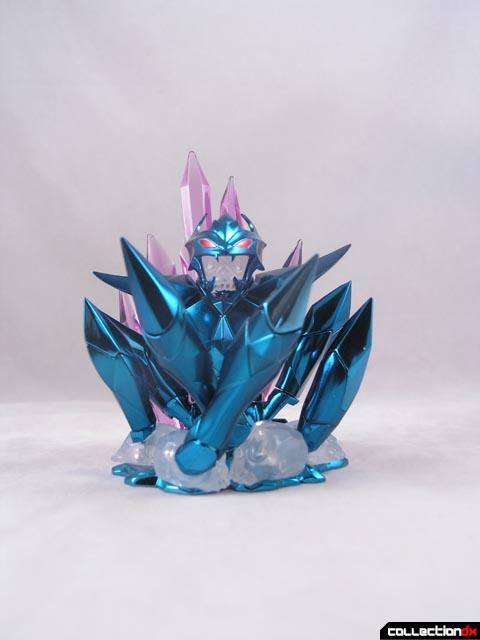 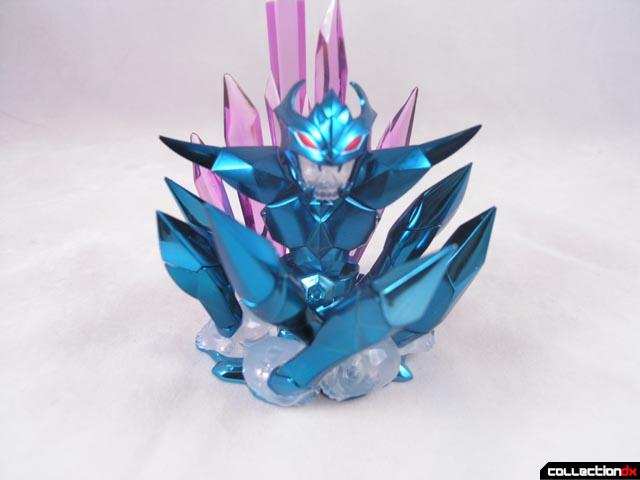 One of the translucent spikes on the Object becomes a weapon for Megrez Alberich, and Bandai has included a flaming attachment to add even more effect. 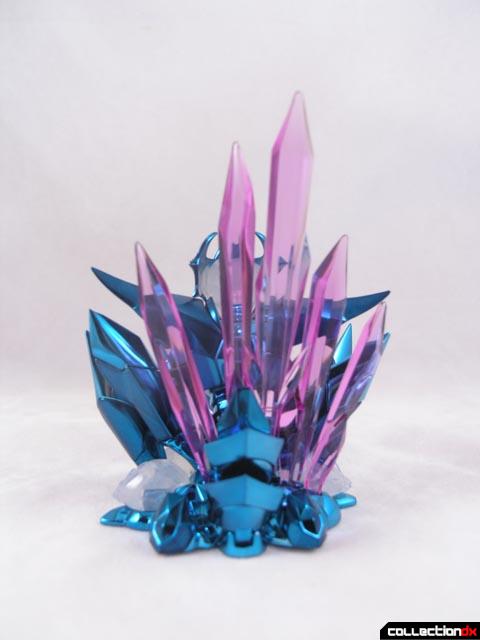 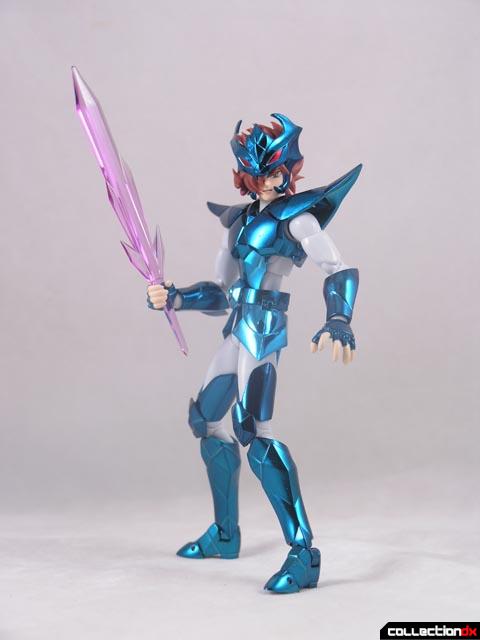 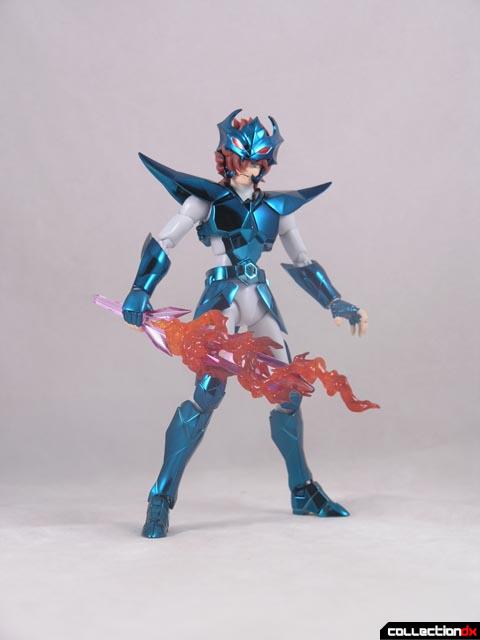 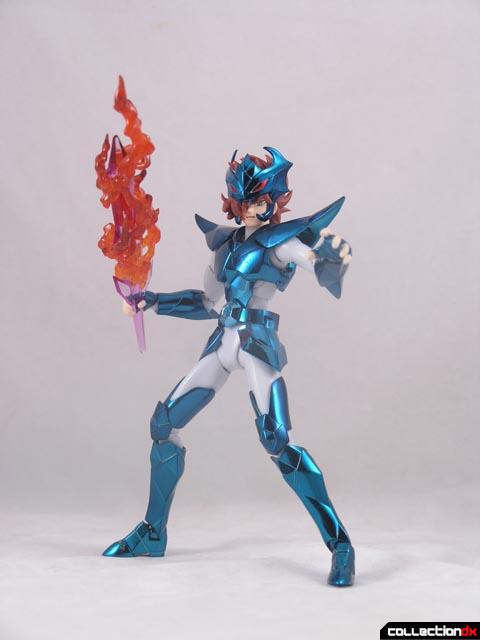 Also included is a translucent purple gem with a base. I think the Jem has something to do with the way the figure calls their Odin Robe. The base needs to plug into a stand, but unfortunately, no stand is included. However stands are available on the aftermarket, as is the one seen here. 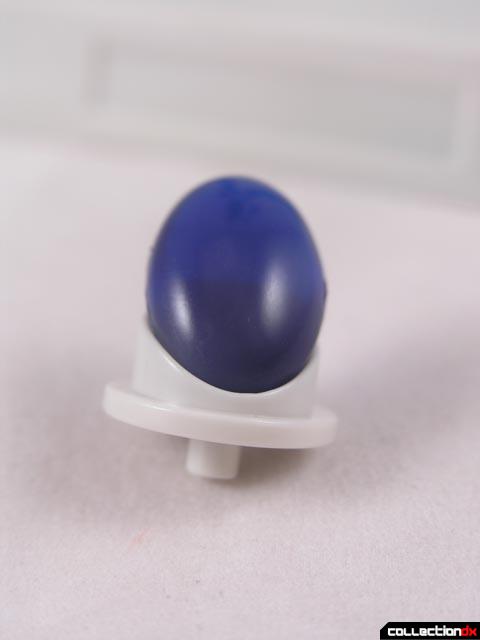 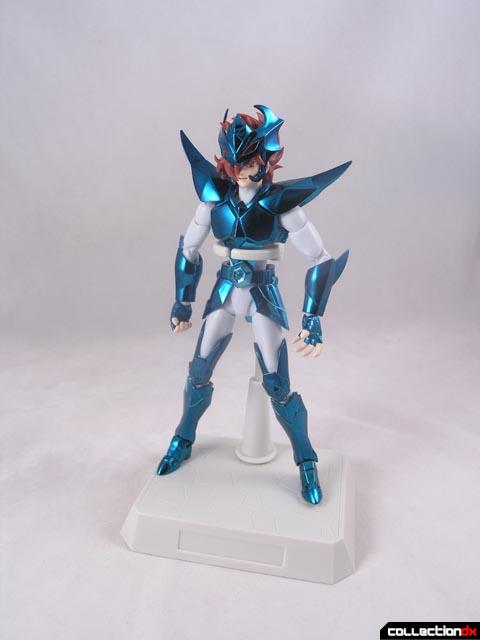 In territories that Bandai Asia distributes, SCM can also come with a premium metal plate that can be placed upon the stand, if you want to separate it from the backing. 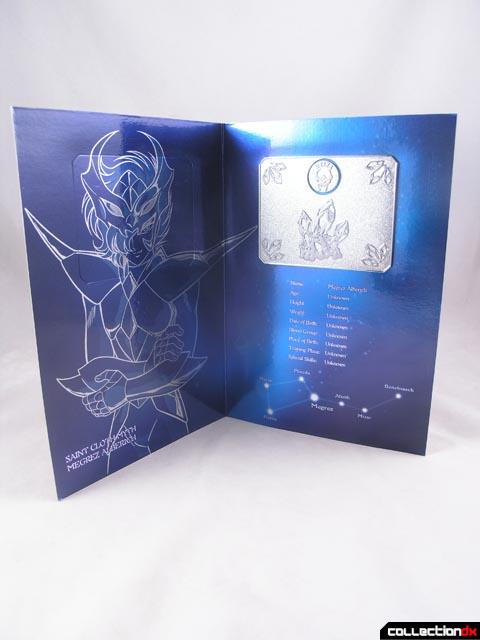 So what do I think about my first SCM? Is all the raving that Adam does justified? Yeah, I think so - especially if you are a fan of Saint Seiya. The figure is dynamic and full of metal, and when you get a whole bunch of them on the shelf they just look great together. 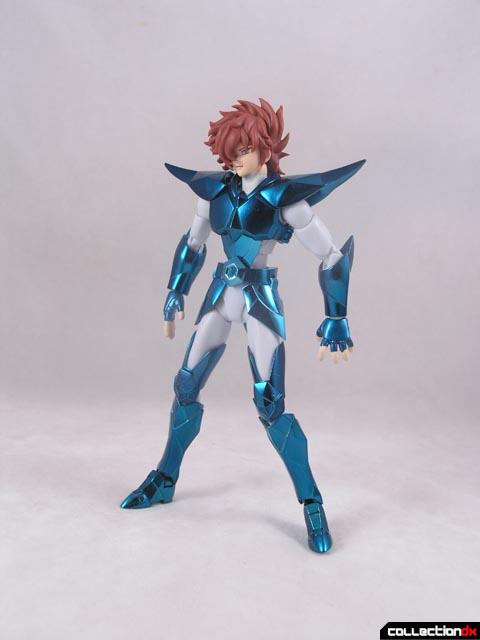 For me personally, I don't think it fits my collecting aesthetic. It's too flashy for me. But it is a great
toy for sure, and I can see why the line has a ton of fans.

Saint Seiya has thousands (if not millions) of fans worldwide. The characters are designed by the great and much loved Shingo Araki-sensei. And so, no wonder the characters are well-designed, shiny, luxurious and so magnificent.
It's very popular here in Europe called 'I Cavalieri Dello Zodiaco' in Italian which literally means Zodiac Knights.
However, for some strange reason I never liked the anime, maybe because it was too psychological for my tastes or maybe because there were no giant robots involved.
The name Alberich, the skull decoration and the term Nibelung immediately reminded me of the famous Norse mythology and Leiji Matsumoto's 'Harlock Saga - Der Ring des Nibelungen' which is a space opera version of the same Norse Mythology.
Very briefly the story is about a rascal Alberich who steals the gold of the Rhine (thought to contain extreme power) and using it for his own purpose of world domination. He even goes as far as to melt the stolen gold and make a ring in the form of a skull out of it. In other words, it is a story about unlimited power in the wrong hands and so chaos would eventually ensue.
Now let me analyse a little the toy. It is simply exquisite from the box design to the articulations, from the unarmored figure to the fully armored one. A must have like all the others, but you must be a truly Saint Seiya fan to do so and I am not. To be honest, I thought the armour was airbrushed plastic or vinyl; never thought it was diecast!! I hope Bandai will give the same treatment to their upcoming Yoroiden Samurai Troopers line of figures. Now that's what I call Samurai armor!!!!

I must have been living under a rock or something, I have never seen these before! I'm loving the die-cast parts. You can never have too much zinc in your diet :)