While the official Americanized name is "The Robot Spirits", the line has also been known as Robot Soul and Robot Damashii (Or Tamashii). The idea of the line is to create an affordable, poseable, durable, highly detailed robot figure. It's the logical progression from High Complete Models, to MS in Pocket, to MS in Action, to HCM Pro, and now Robot Spirits. Bandai continues to improve and grow, unofficially dubbing this line the "Revoltech Killer". 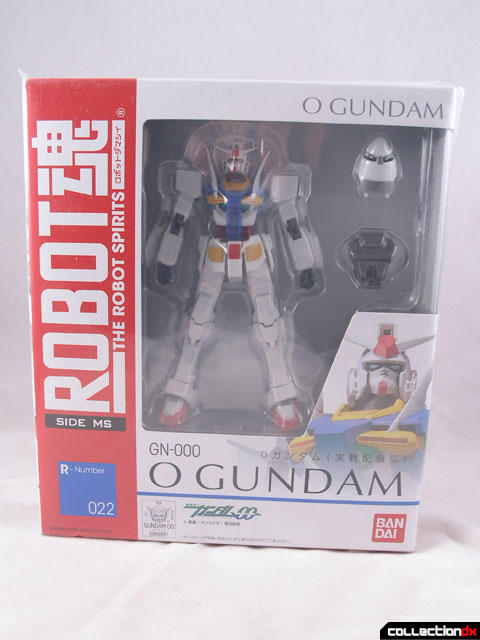 While the Robot Spirits figures are similar in size to Revoltech, that's where the similarities end. The figures are basically scaled-up HCM pro figures, more akin to Yamato's GN-U DOU figures, except these come with accessories and don't fall apart. 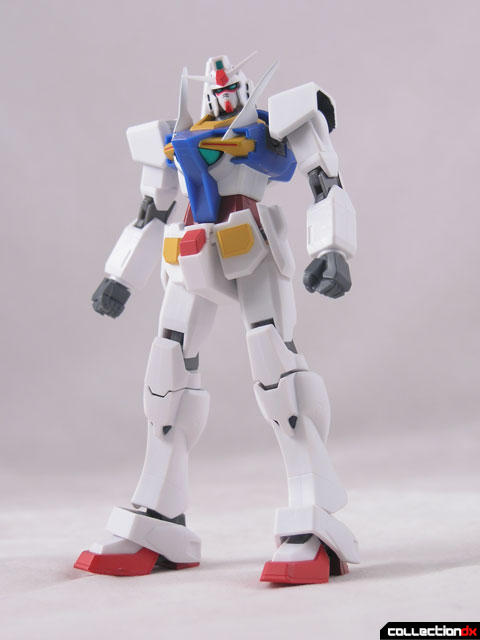 We here at CDX are a bit late to the Robot Spirits line, with this item being the 22nd release. But this figure is in the first batch that Toynami is bringing to the States under Bandai's Tamashii banner, so we got some to check them out. 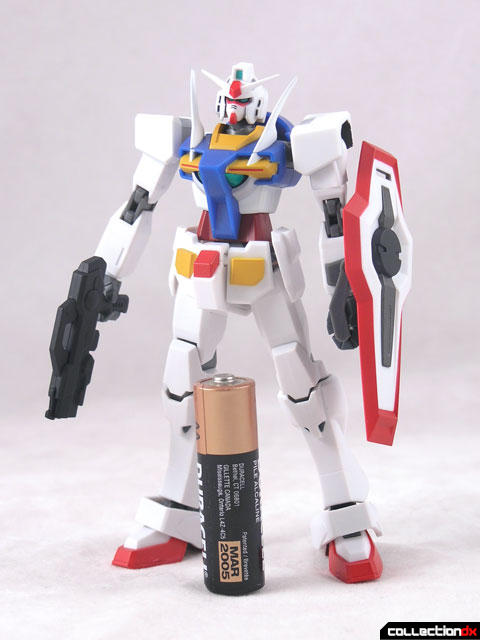 The character depicted here is the 0 Gundam as depicted in the Mobile Suit 00 Gundam anime series. I haven't watched the series, nor do I plan to, as Gundam bores me to tears. What I do know is that this 0 Gundam was originally grey and white, and sometime in the series, the pilot paints it up so that it resembles an RX-78, the most iconic of Gundams. I don't know if 00 Gundam is in the same continuity as the classic Gundam, so whether this is intentional on the part of the pilot, or a tribute by the production staff is lost on me. Feel free to chime in with comments. 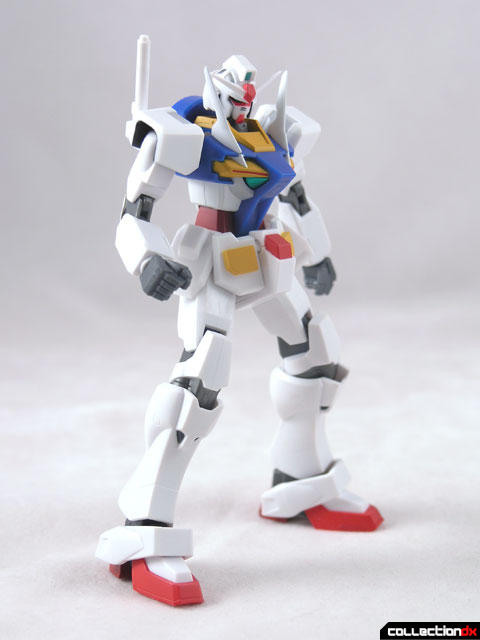 Either way, the end result is that we have a toy that looks pretty much like most every other Gundam toy ever released. That's not to say its bad, but I wish the Gundam creators would get over themselves and make something different for the main character.

Aesthetics aside, it really is a nice figure. Judging from the line art that I have seen the sculpt seems fairly accurate.

There are two things that make the Robot Soul line for me - Articulation and build quality.

The articulation is awesome. Double-jointed knees and elbows, full torso motion, feet, hands, head, shoulder pads, armor skirts - everything moves and nothing falls off. The combination of ABS and POM plastics make for sharp, durable pieces that stay together. 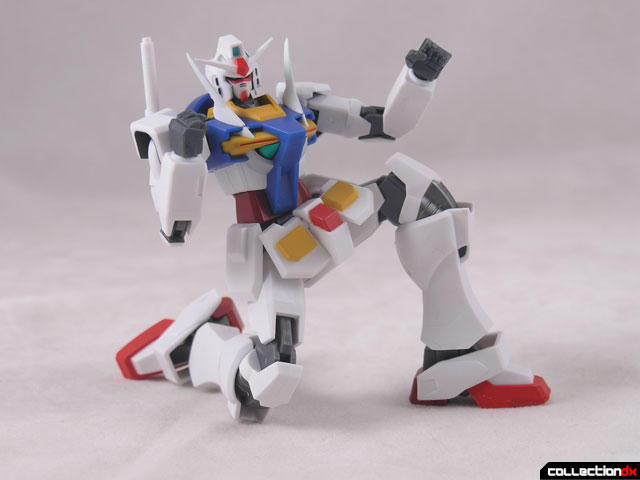 There are just enough accessories, but not too many to keep track of. The 0 Gundam comes with a beam rifle, beam saber w/hilt, shield, interchangeable hands, Two rear engines and spare head crest and shoulder spikes.

The Beam Rifle is shorter and stubbier than the ones that usually accommodate the RX-78 archetype. It fits snugly in either of the two included holding hands. 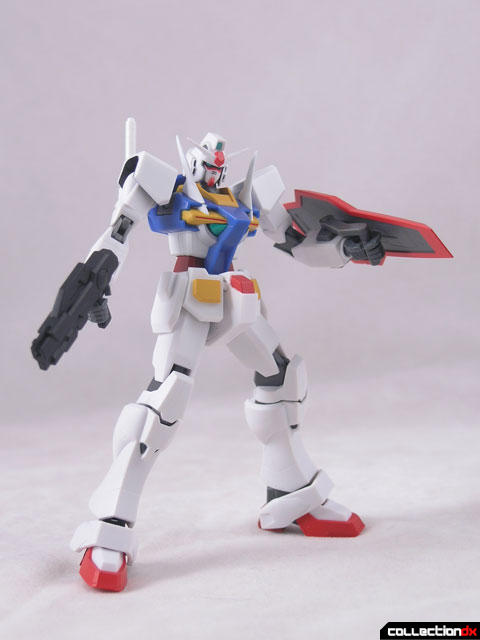 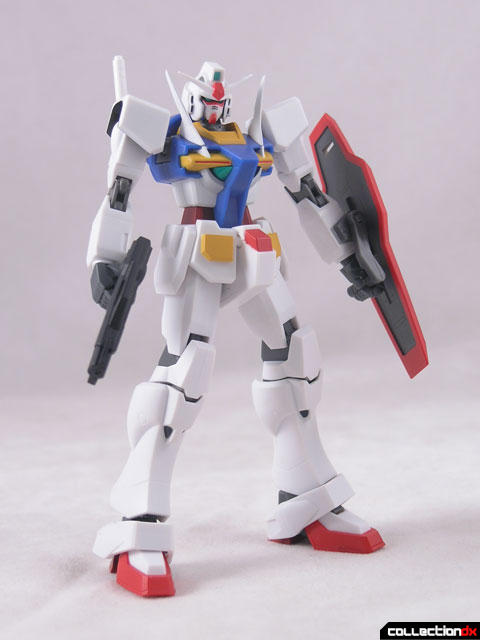 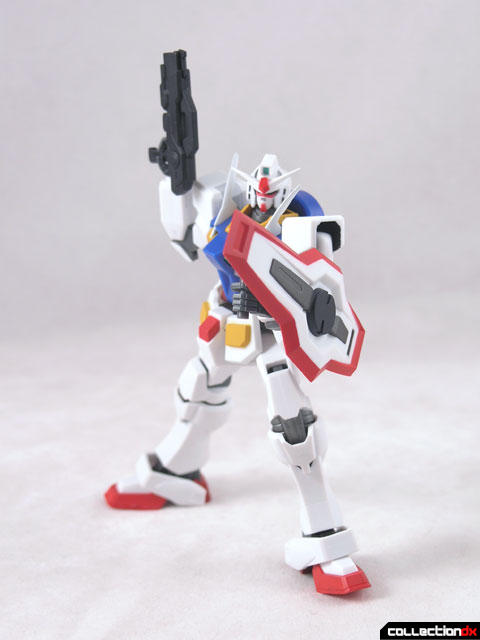 The Beam Saber is actually two parts. The hilt can be stored in an articulated holder on the back. The range of motion in the arms allows you to actually have the robot reach back and grab the saber. The beam plugs into the saber easily. 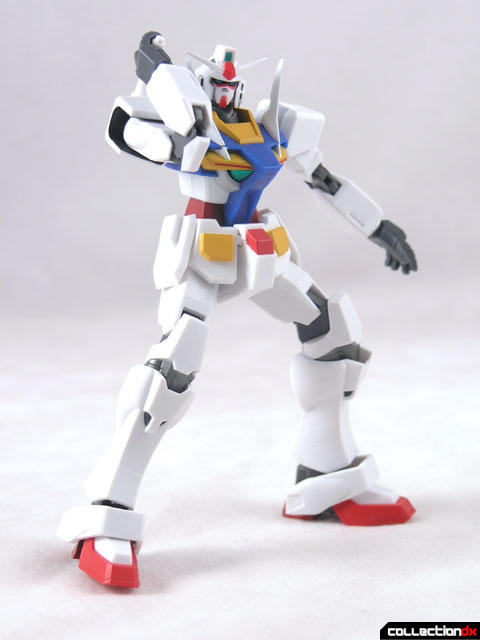 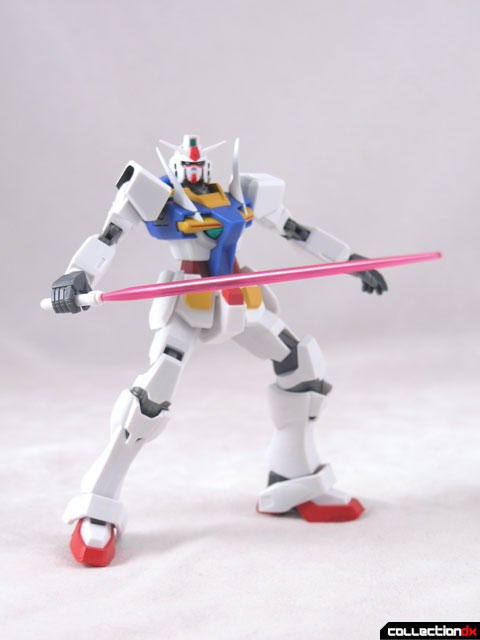 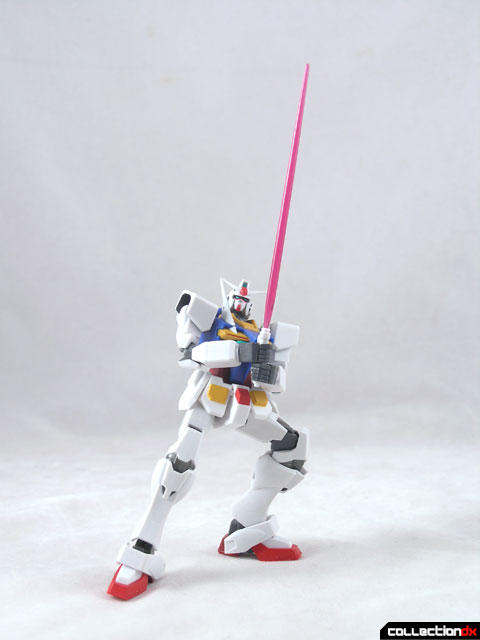 The Shield attaches to the left arm and can pivot on its arm bracket. The bracket can clip onto the arm but also features a handle that can be grasped with variant hands. 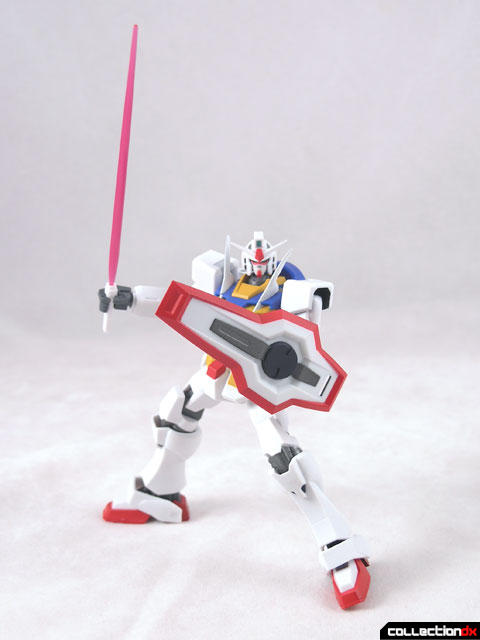 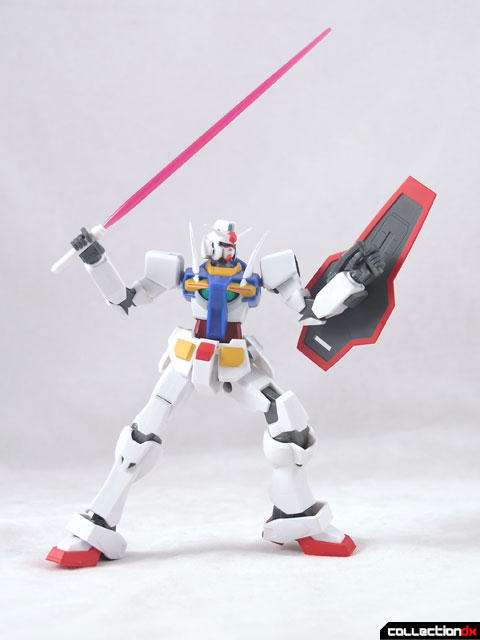 The 0 Gundam can be equipped with either a GN Particle Condenser or a GN Drive on the back of the figure. 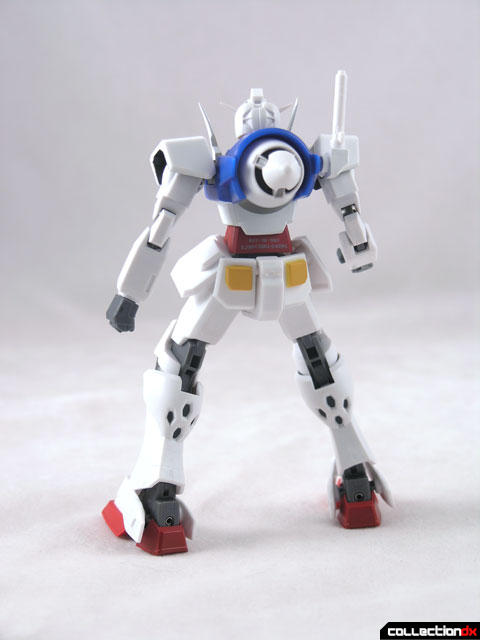 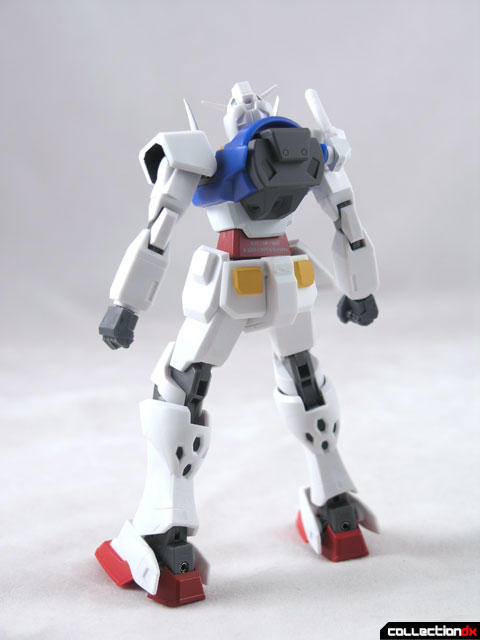 Lastly, Bandai included spare parts, should you lose the head crest or either of the spikes from the top of the chest.

There are lots of good accessories in this set but one glaring omission - a stand. Bandai sells a stand separately for 900 yen called the Tamashii Stage if you want one, but really, they could have included it.

If you are not totally burnt out on the whole classic Gundam color scheme, then, by all means, pick this up. its a fine figure. I, however, will throw my support behind the non-gundamy Gundams instead. 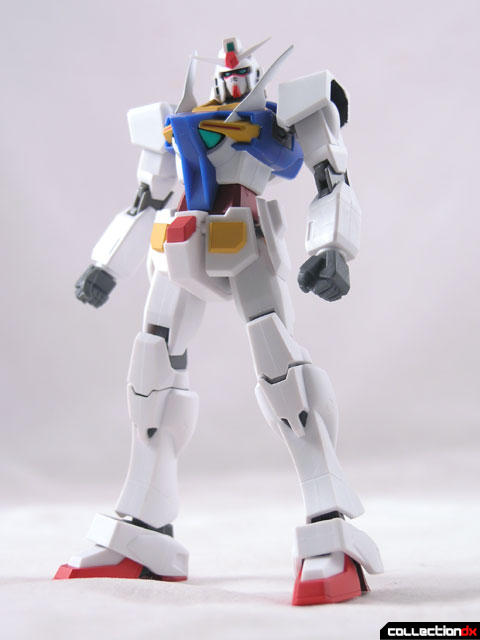 It was done by the one who did the original gundam design, well the only one done by him after a long time working with alot of gundams with the exception of the Turn A

You and I seem to be born under the same star, Josh!

We both use a DURACELL battery for scale and we both find Gundam somewhat tedious.

Not to mention our passion for robots and robots!

Personally, I think the ONLY Gundam worth watching is the ORIGINAL TV Series. Nuff said.

Its worth pointing out that the last time someone did something genuinely different with the Gundam franchise - Turn-A Gundam - it was absolutely (and unjustly) hated. Its still possible to just about fit all the Turn-A merchandise ever released onto two pages of A4. Of course, we know better now (Turn-A is a truly great series) but its taken about ten years since its release for opinion to change...

Speaking of Turn A Gundam,they are gonna make a robot soul of him too.

They are. Out in October.

I know. Mines on pre-order. :-) *Still* plenty of room on those merch pages. I want my wasp-striped suit 1/6 Harry Ord, dammit Bandai!

You should watch Turn A.

The 0 Gundam was originally used by one of the *villains*, Ribbons Almark. Mosey on over to http://www.mahq.net/ to see the
other Gundams from 00.

I've done my best to keep up with Gundam 00 via freebies and the Sci-Fi Channel.

So Here's the skinny on the O-Gundam that I know:
its the first generation Gundam that predates the Series' mobile suits, and was the first Gundam to actually debut in the series before being locked away in Celestial Being's vault. By the end of the first season, its original Solar Furnace (the egg shape on its back) was transfered to the 00 Gundam and when it reappears in the final episodes of the second season, its drive is replaced with that smaller GN Particle Storage backpack, and repainted into the traditional RX-78-2 colors.

Its an ironic touch of the fact that its pilot Ribbons Almark is voiced by Noboru Sougetsu in the Japanese cut, who voiced Amuro Ray in the original series. Where as in the English edition, Brad Swaile, the dubbed voice of Amuro, plays Setsuna F. Seiei.

And, as it hasn't been explicitly stated, the colour scheme is simply a nod (and the whole Amuro is the baddie joke).

bandai should start with some super robot franchise, Robot damashi is entirely about G 00 , code geass and some random eureka 7 and FMP. too real for me.
They kind of lack the fun fanct of posing of revoltech and saying "kaisaaaa swordoooo" or "gigaaa doriru burek" (ok, kaiser sword and giga drill break , lol!)

About time there is a review for these robo soul toys!!! (Please do more reviews for these ;_;)

Looks pretty articulited and cool,I just ordered the Crossbone Gundam X1 and it should arrive in a couple of days :)

anyway thanks for review!!

Apparently gundam 00 is supposed to take place in our time line(A.D.). Not a whimsical made up universe. That's pretty much all I know for it also bores me to death.Nothing new IMO just earth vs. space all in the name of peace.

Anyway I doubt this will be a Revoltech killer. Those are big words to say about a line that has made figures for Tegen Toppa Gurren Lagann, Evangelion, Rebuild of Evangelion, Getter Robo, Transformers,Patlabor and DMC 3 just name a few. Only thing they may have is the destdroid monster that could be transformable comming out.

The only problem I have with this, and it's not even really a problem, is the strange fetish the sculptors or "articulators"(I'm going to assume this is a real job title, because it's an awesome word) have some fetish for moving knee armor. This is apparent on lots of the tamashii nations merchandise and hobby division merchandise. At least on the Robot Damashi that it's on, it's somewhat "optional", and in some cases adds kick-ass detail to look underneath, but you don't have to use it, like on the Crossbone sculpt. Anyway, this line is great because it comes with "being totally awesome" as an included feature.

Hobby stores should have them, or should be able to order them for you, but you'll never see Robot Damashii in any big box stores like Walmart or TRU.

It's pretty lame how much they made the box look like a Revoltech box,IMO.

I saw the first 3 or 4 eps of this show,and I don't really see how it's boring,but whatever.
BTW,anyone who wants to check it out for themsleves can watch it for free (not a bootleg) in high quality on crunchyroll.com,along with CDX favorites Captain Harlock and Galaxy Express 999.
(no I don't work for them,I just want to spread the word)

A quick note: the "spare" chest fins and V fins are actually made of hard ABS, while the ones attached to the figure out of the box are soft, bendy PVC. This is a feature taken from the HCM-Pro line, which does the same thing.