This is next entry in my ongoing look at the Volks Super Robot Wars FAF series. If you’re not caught up with the story so far, check out the beginning of this terrible adventure with the Thrudgemir review here.

The Granzon is one of the most recognizable antagonists of the Super Robot Wars franchise, first appearing in Super Robot Wars 2 for the Famicom as an important part of the “Classic” SRW timeline, and frequently popping up since. Built by genius scientist, renegade prince and all around jerk Shuu Shirakawa, the Granzon combines the best technology the Earth has to offer, the spiritual mysticism of Shuu’s home world La Gias, and stolen technology belonging to the alien invaders targeting Earth. Shuu even goes as far as improving the aliens’ own technology for the Granzon, because he’s Shuu Shirakawa. The resulting ‘Armored Module’ is one of the most powerful units in the entire franchise, and its gravity manipulating attacks dwarf the power of the technically similar Huckebein Mark I, which was itself an incredibly overpowered unit. As if that wasn’t enough, the Granzon is the rare SRW unit whose spelling everyone can agree on. Amazing!

Just like last time, I’ll give everyone a chance to get caught up first with some action shots.

Can the only action figure of the Granzon measure up to such a pedigree? No, probably not.

Before we start, I've prepared some music. Please enjoy this while you read. It will help us all get into the right mindset for this review.

The Granzon comes in the usual glossy and hard to photograph box, entombed inside five layers of plastic. 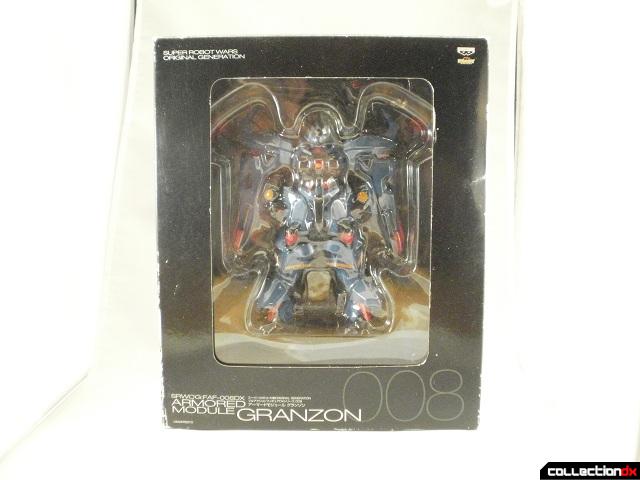 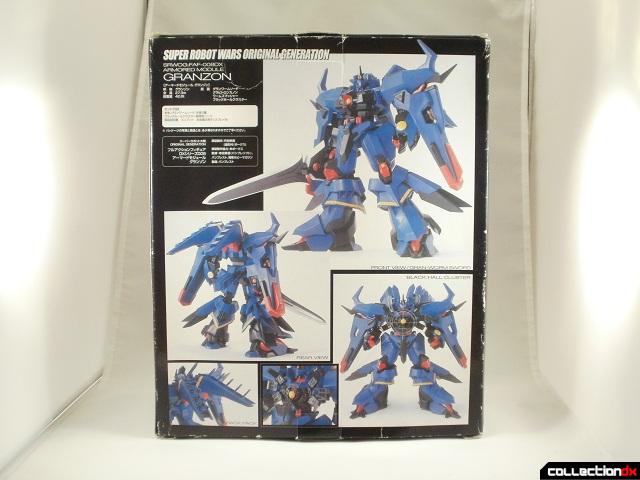 Once out of the box, you need to attach the two thruster units, as well as three fins on each leg. Already, the first problem presents itself. Unlike the Thrudgelmir, which used a fairly even mix of ABS and PVC plastics, the Granzon is almost entirely PVC, save for some joints, and also the pieces that you have to attach. The ABS pegs on the pieces that you have to assemble aren’t particularly sturdy, and when pushed against stiff and slightly warped PVC, well, sometimes they break. On this Granzon the rear-most fins on both legs are currently held on with double-sided tape. One of the pegs on the thrusters broke as well, but those have two points of connection, and it fits securely despite the missing piece. 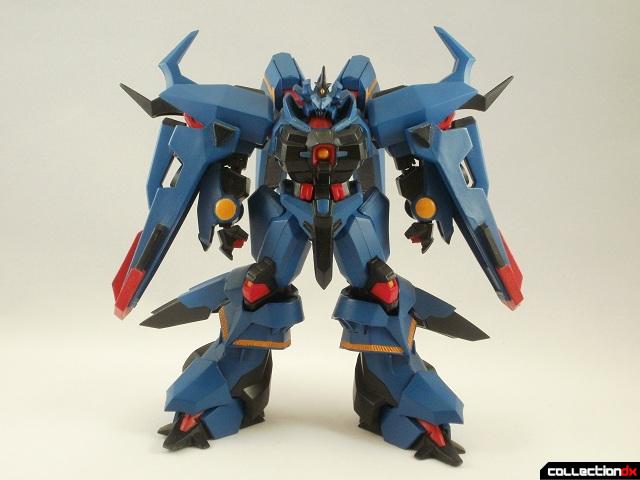 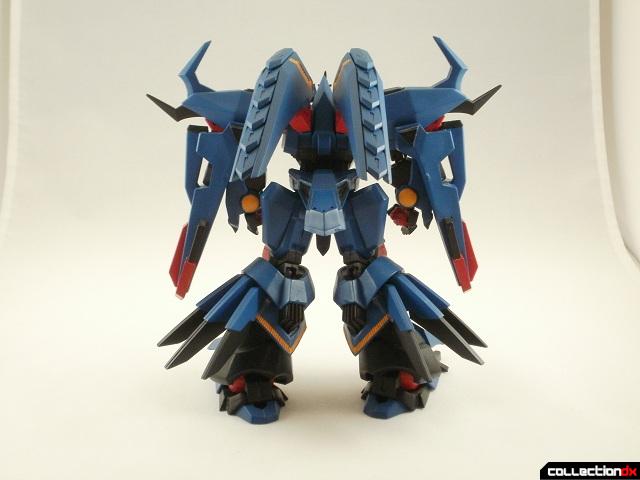 The sculpt and paint applications aren’t bad. There are some ugly seam lines and some of the parts look kind of melted, but the overall appearance is accurate. The paint job lacks the waxy feeling that is present on all of my other FAFs. Perhaps just as problematically though, dust ingrains itself in the paint to such an extent that cleaning doesn’t seem to get it out. 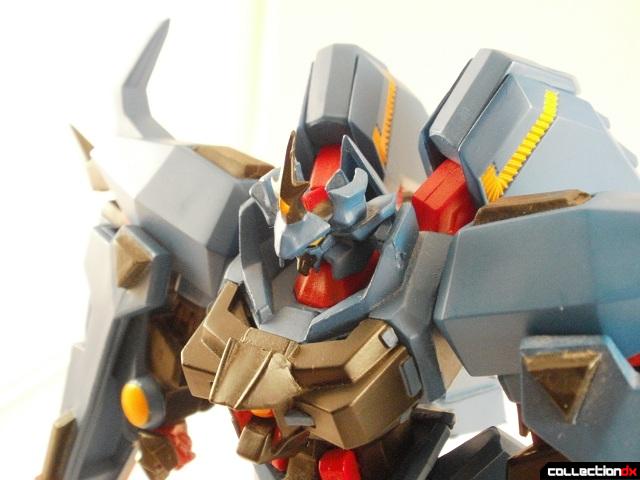 Articulation is…hmm. There--there is articulation. The knee joints have two clicks worth of poseability and the elbows can wiggle a little. It looks like the arm was designed with more lateral arm movement, as opposed to none, but the shoulder design prevents most of it. Unlike the Thrudgelmir, which was made later, the head has a ball joint. It’s limited in its motion, but it’s there. 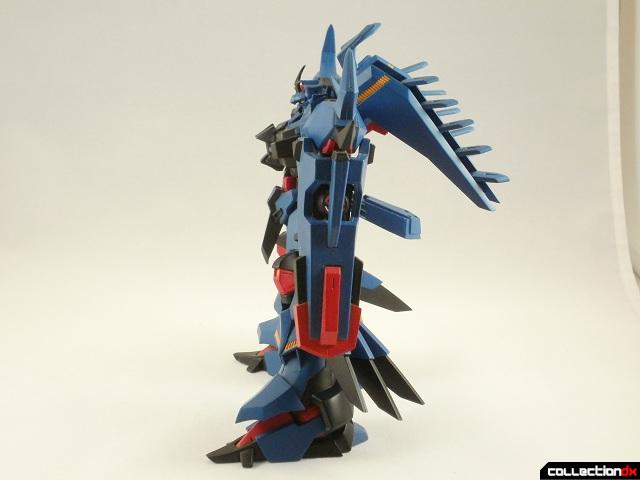 Like the Thrudgelmir, the Granzon has some pretty serious balancing issues. The legs are connected to the body at a diagonal angle, such that the feet form a permanent ‘V’.With the legs spread all the way apart, the figure is (mostly) stable, but if you try to stand it upright the angle of how the ball joints in the hip attach, combined with said joint’s relative lack of friction cause the Granzon to immediately topple over backwards. Does this story sound familiar yet? It doesn’t help that even when stable, the figure has a slight backwards lean to it. Theoretically the hip issue could be fixed with some nail polish remover or the like, but I’ve already had to learn my lesson that it’s best not to try to take the limbs off these figures (a story for another day)

Included is the Granworm Sword, which is kept tucked away in a pocket dimension when not in use. The sword is permanently attached to one of the Granzon’s hands, and has a tendency to fall off when bumped, due to the short length of the wrist peg. Also the extreme angle of the hand means that all you can really do with the sword is point with it, or pretend to be He-man. 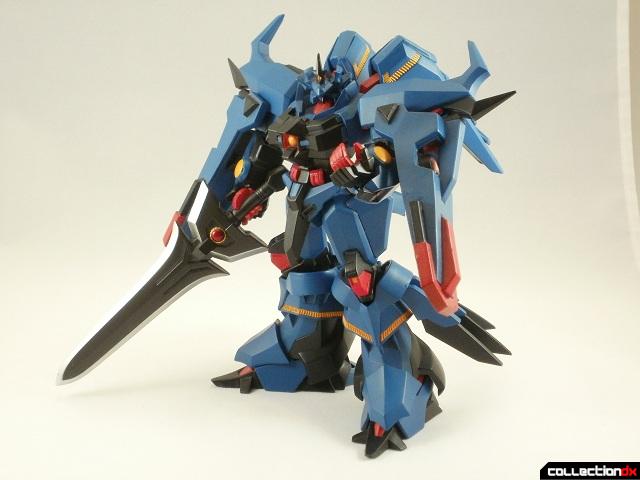 The Granzon at its most extreme range of motion. This is barely stable, but it’s already much more than the Thrudgelmir can do. 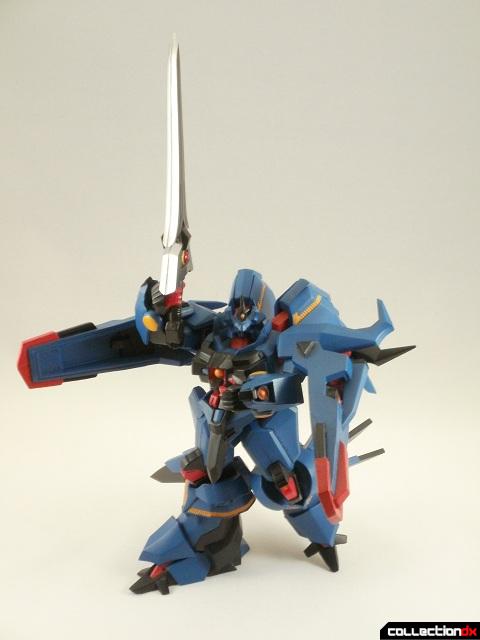 The Granzon’s strongest weapon is its Gravitron Cannon, which is mounted in its chest. To replicate that you get…a bunch of little plastic bits. 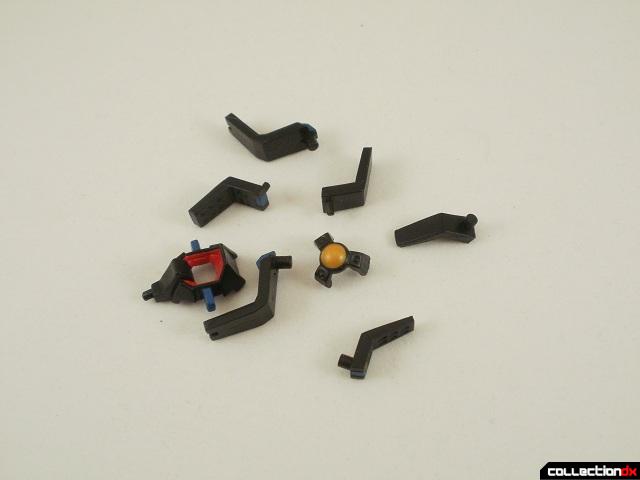 Start by pulling off the Granzon’s chest. 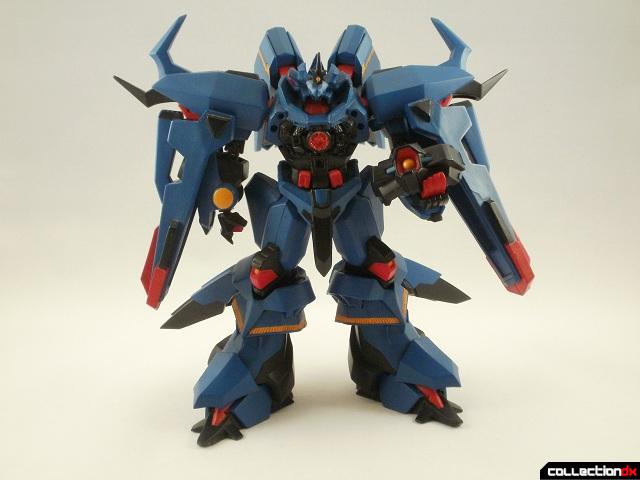 After that, insert each tiny peg into its respective place, nervously remembering all the while how easily these things break. 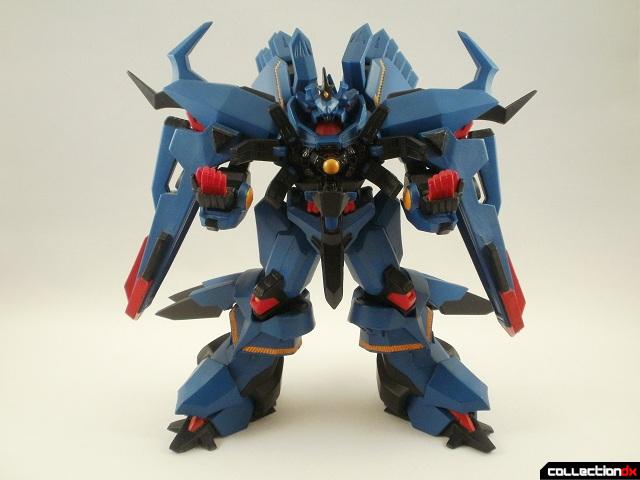 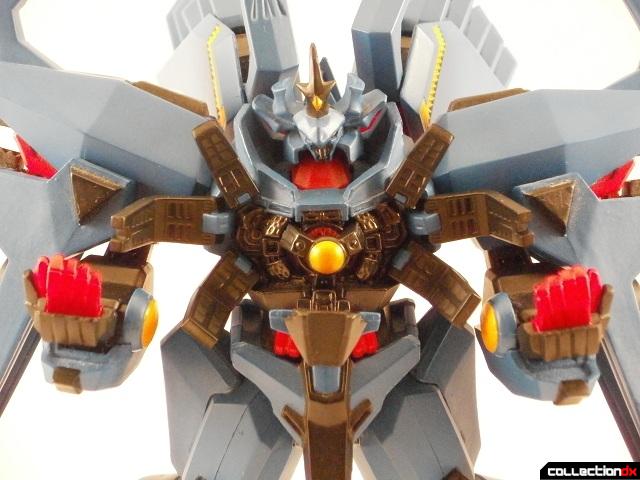 It’s been brought to my attention that the scale of these figures isn’t always consistent, but Zeonography Zaku has already been paid for his appearances for all upcoming FAF reviews. At any rate, the Granzon is much closer to the “about 1:144 scale” that this line tends to shoot for. 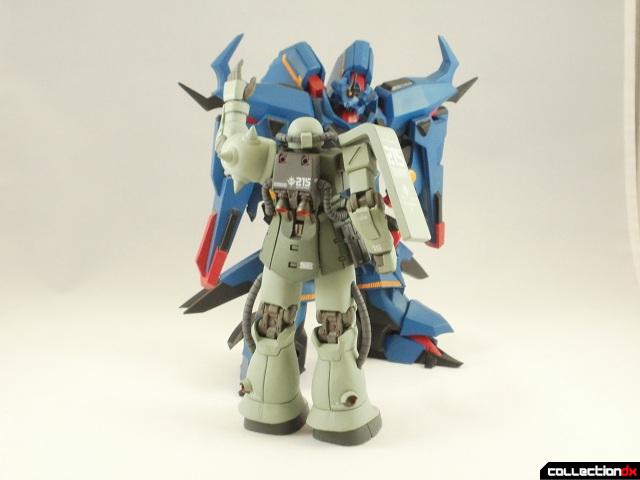 And now, a momentary interruption for a special presentation of “Ragnarok”, a one act play. 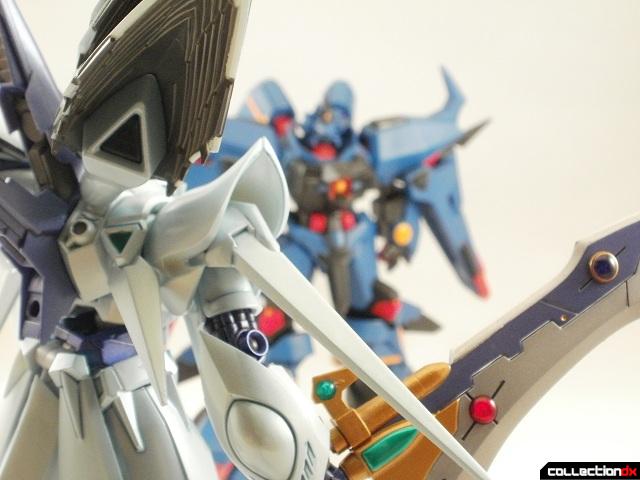 「Shuu! What are you scheming now?!」 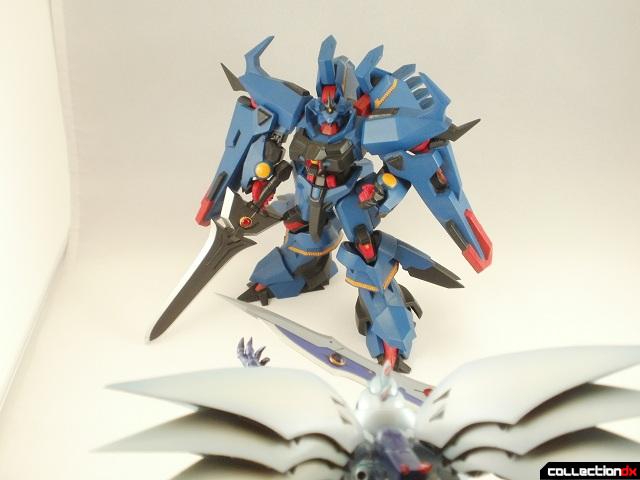 「Hoh, Masaki? Very well. Shall I show you the power of the Granzon? 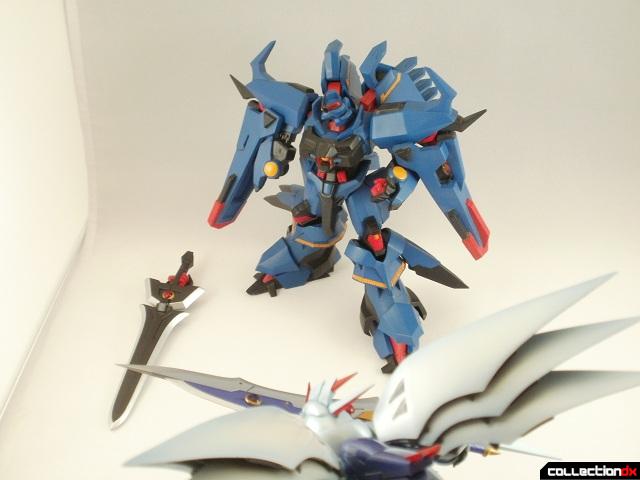 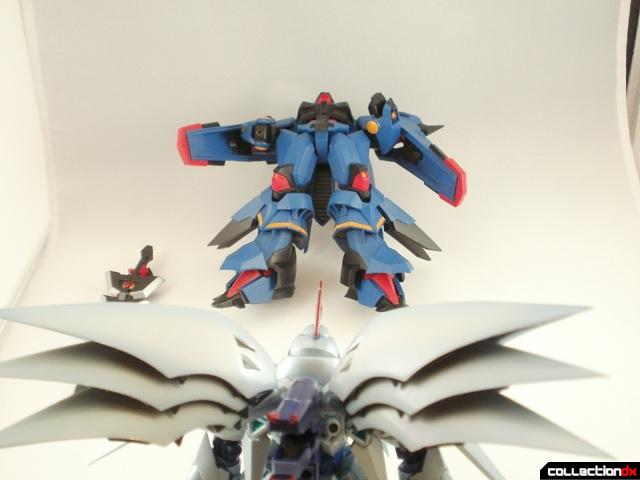 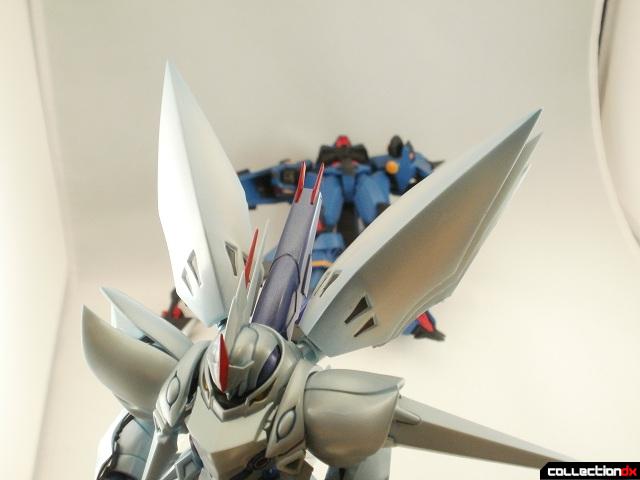 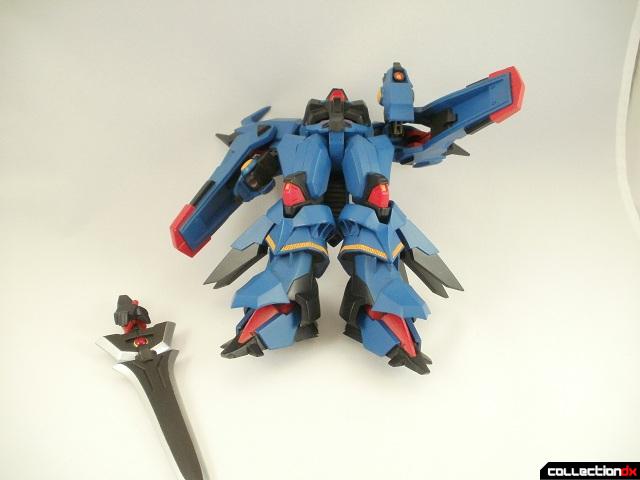 Like all FAF releases, a stand is included. Given how useless the Thrudgelmir’s stand is, I wasn’t actually going to take the Granzon’s stand out of its bag, but it turns out it’s actually pretty good at keeping the figure secure and upright, if not slightly tilted backwards. So there’s that. 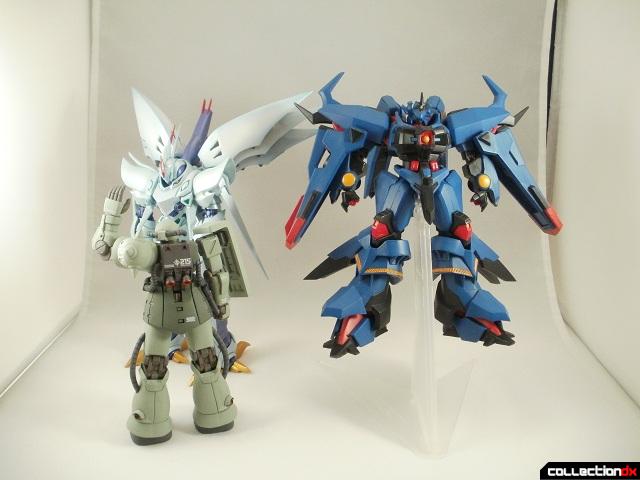 The Granzon used to be one of the most sought after of the Dengeki Hobby mail away figures, commanding between $200-300 on the secondary market. Those days are now long gone, as it was one of the figures Volks re-released through their own channels, not to mention that the market has generally come way down on this series as a whole. The ‘blue-box’ Granzon also includes an extra version of the Granworm Sword, depicting it as it appears in Super Robot Wars F. For the time being, I am unaware if there are any other improvements to that version.

The FAF Granzon keeps things fresh by having problems that are different, but that doesn’t mean you should pay money for one.

2 comments posted
Another cool sculpt but a

Another cool sculpt but a terrible figure. Too bad.

if you don't mind the assembly, try that one...plus, NEO GRANZON!

the original is childsplay.