According to the manufacturer, this product is not recommended for children under the age of 4 years as some parts may be sharp or blunt enough to cause personal injury. This is an imitation of a fictitious weapon - Supervision by a Responsible Adult is Advised during play. Toy should not hit or be thrown at people or objects as it may cause damage or personal injury

Two (2) AAA batteries are required to operate electronic sound features, and should be replaced by a responsible adult. 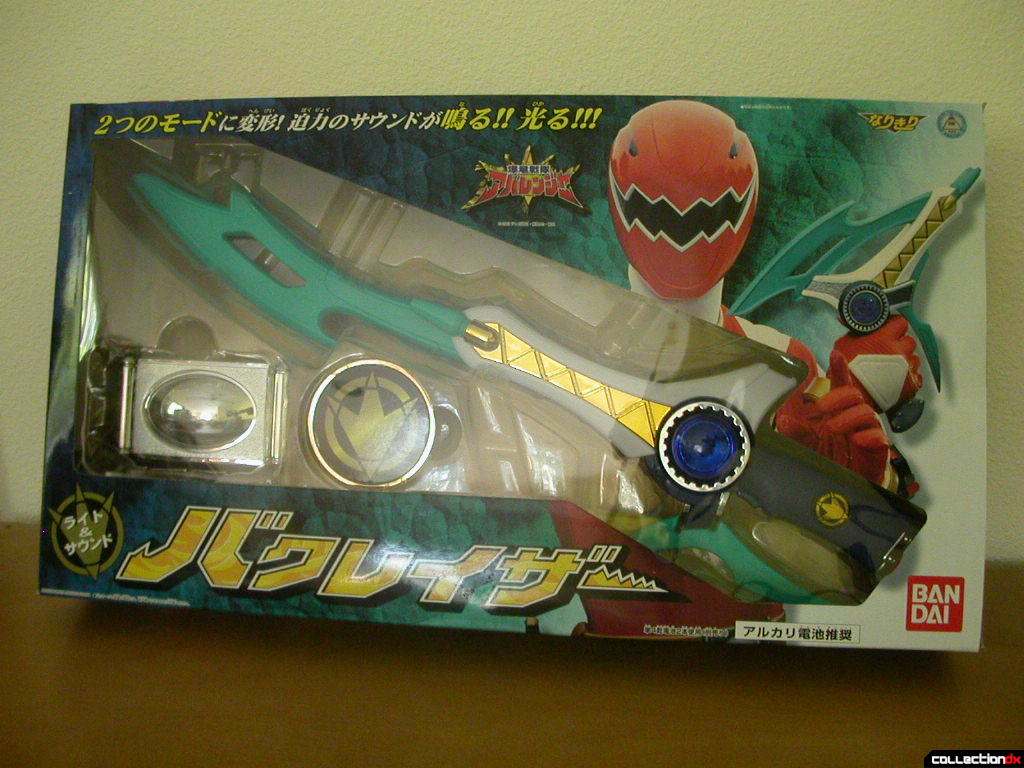 For the second time since 2001’s “Hyakujuu Sentai GaoRanger”, a movie-unique mecha was used. Some would even call the DX Bakuryuu Gattai BakurenOh itself just a simple repaint despite the details changed to it from the DX Bakuryuu Gattai AbarenOh. In this respect, the Electronic BakuLaser shares this, being based on the more common AbaRanger sidearm, the Electronic AbaLaser. However, it would also be a first in Super Sentai history: a weapon ­, and thus a toy, made specifically and only for a movie. The BakuLaser has two modes of operation:

Even though the BakuLaser’s blade and knuckle guard have been altered to match the more threatening appearance of the BakurenOh, it is otherwise identical to the AbaLaser. Whereas the AbaLaser is primarily dark blue, black, gray, & silver, the BakuLaser has more natural arctic coloring- white, gold, & turquoise - but shares the dark blue, and swaps the silver tooth color for gold. The two golden claw-&-circle logo decals on the handle are identical as well; a feature the BakuLaser did not have until after it was taken back by the AbaRanger at the end of the movie. The red ‘eyes’ of the AbaLaser have been swapped out with blue versions here, but they still retain the detailed AbaRanger pattern on the inside. Also, the gun muzzles on the BakuLaser actually match the color of the blade & guard; compared to the yellow versions on the AbaLaser which did not match the gray parts. And finally, the transparent red trigger was replaced with a transparent blue one here.

The insides are no different from the outsides- meaning the Light-&-Sound feature. A single light shines through the left ‘eye’, while the speaker sounds through the right ‘eye’. When the switch on the back of the handle (conveniently placed when the thumb can easily reach it), it chirps & blinks a few times to let you know it’s on. In Sword Mode, when the trigger is depressed, there is a quick clash of a blade hitting something; holding the trigger down does nothing. Switching between Sword and Gun Modes causes a different quick chirp/light pattern when the handle is rotated. Finally, in Gun Mode, squeezing the trigger produces a loud animal-like blast, and the light matches it. Holding the trigger down will cause the first half-second of the effect to repeat over-and-over until it is let go. 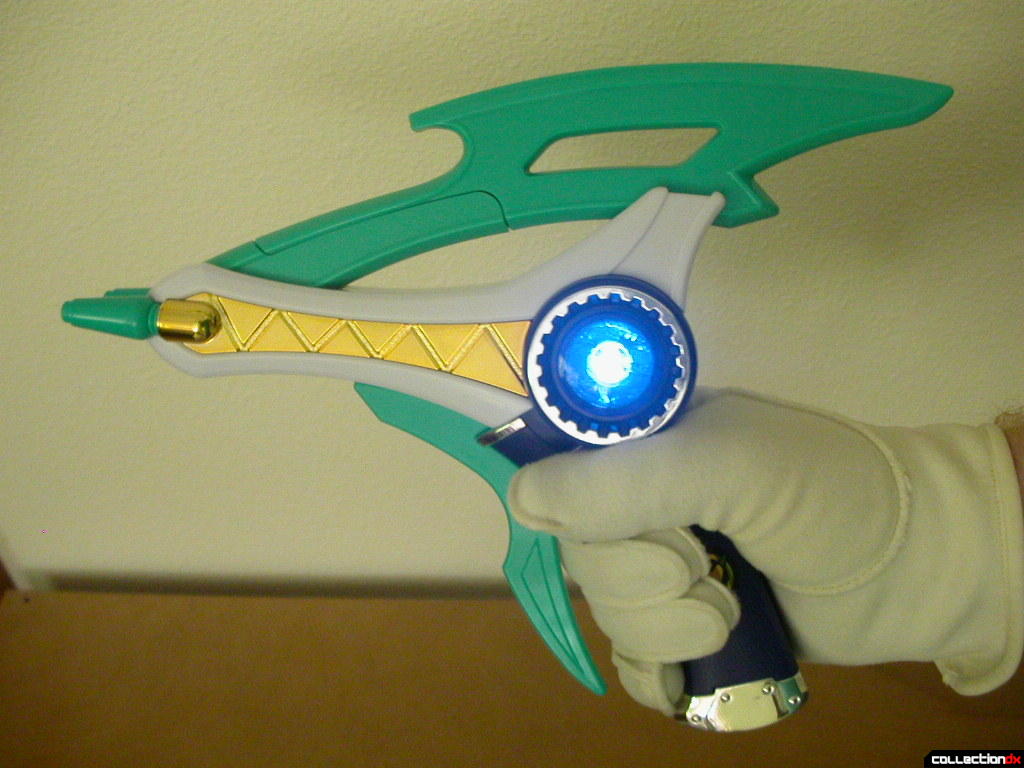 The two-step transformation is very easy either way you go with it. To rotate the blade in or out, press the turquoise button on the right side. Same with the handle; press the button next to the right ‘eye’, and swing it around. Both make very satisfying clicks when they’re locked into place. 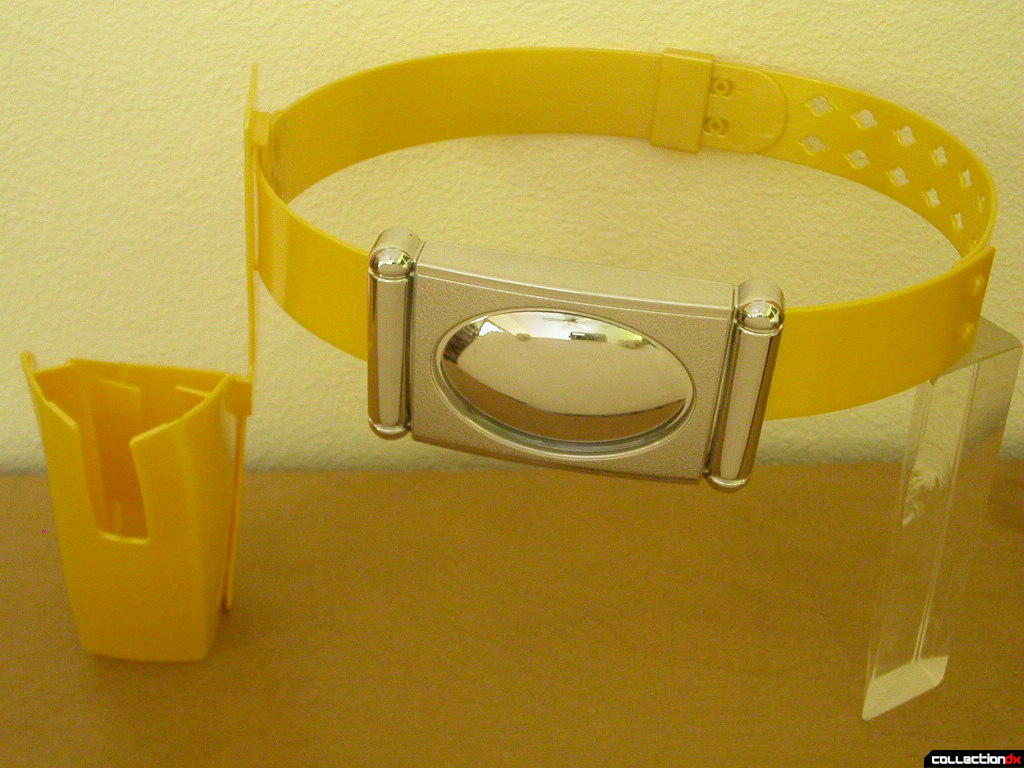 As for the accessories, they, too, are identical to the ones for the AbaLaser- yellow PVC holster, adjustable yellow three-piece PVC belt (fits children’s waist size 22-27”), a closed silver AbaRanger belt buckle, and an AbaRanger emblem on an ABS disc. The emblem can slip over any pocket, but not onto the belt. The holster and buckle need to be slipped onto the belt parts before it could be wrapped around the kid. [Unfortunately for larger collectors (like me), neither buckle nor holster will work with a real leather belt (they’re too thick to fit), or simply clip onto your pants (both have closed loops).] 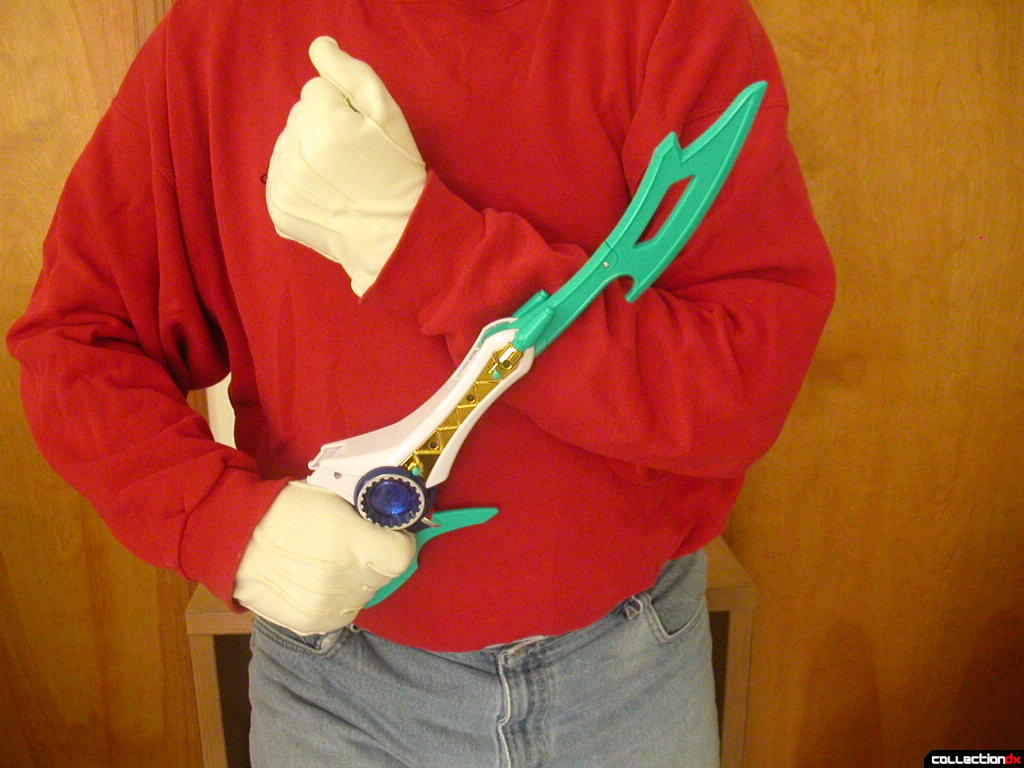 For those of you wondering what the differences are between the Electronic BakuLaser from “AbaRanger Deluxe” (it was never seen in the series), and its English-speaking counterpart in “Power Rangers Dino Thunder”, well - Bandai America loves to disappoint. There was no “PRDT” counterpart; not even a repaint. It wasn’t mentioned in the show either, though since they did the same for “AbaRanger”, I can’t come down on them as hard for that...

Because this is a scaled fictional weapon, Bandai made the wise decision of making the knuckle guard and sword blade out of PVC. I agree with this - it can hurt ya if you give it a good swing! The guard is a softer PVC version, so it can flex really easily. I am slightly disappointed at how the light only shows up on one side, but I can understand why they did it. Same with the positioning of the transformation buttons on the right side; they might have been able to hide them elsewhere. But, the On/Off switch is in a great place, everything locks well in place, and it fits most adult collectors’ grip fairly easily (though you may get cramped after a while). It’s well built and adequately heavy. The sounds are nice & clear, and the light is really bright! For a ‘repaint’, it does pretty well on its own. If you liked the AbaLaser, you’ll get the same kick out of the rarer BakuLaser. Highly recommended!

To see how the Electronic BakuLaser can change, see this QuickTime video! 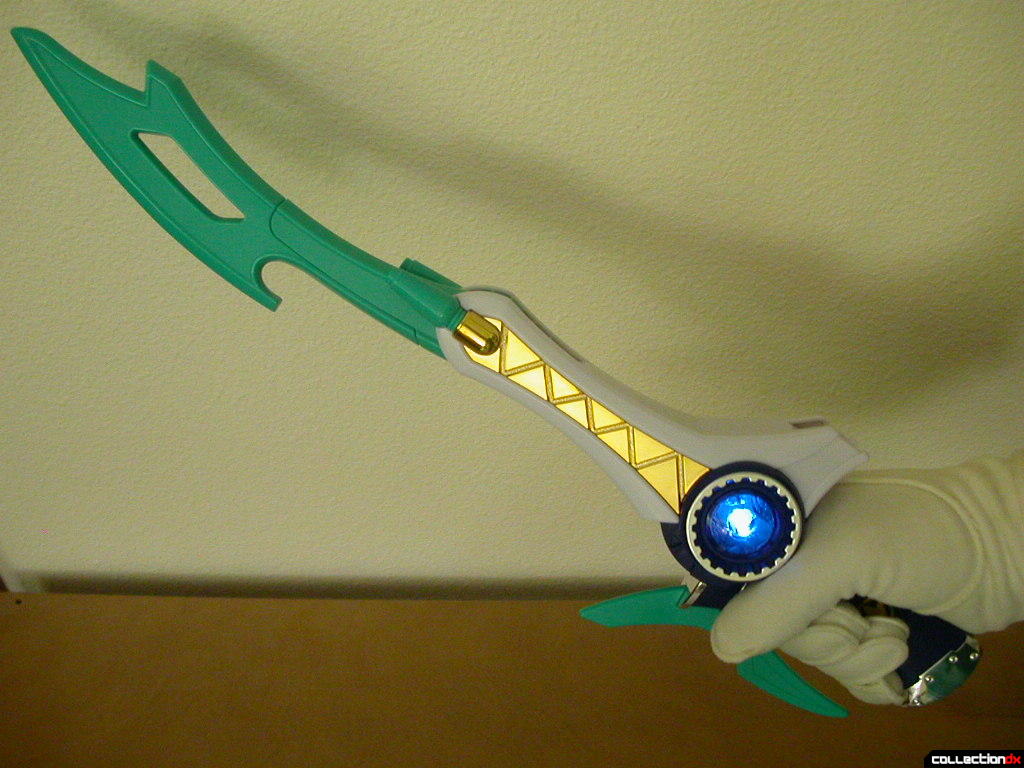 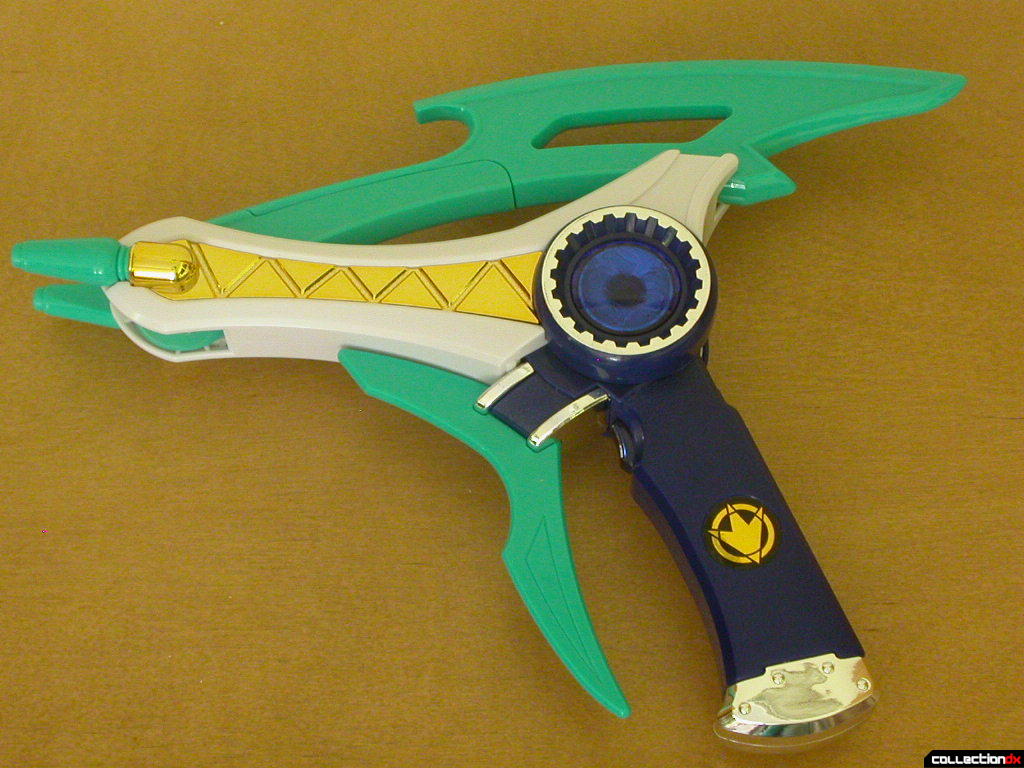 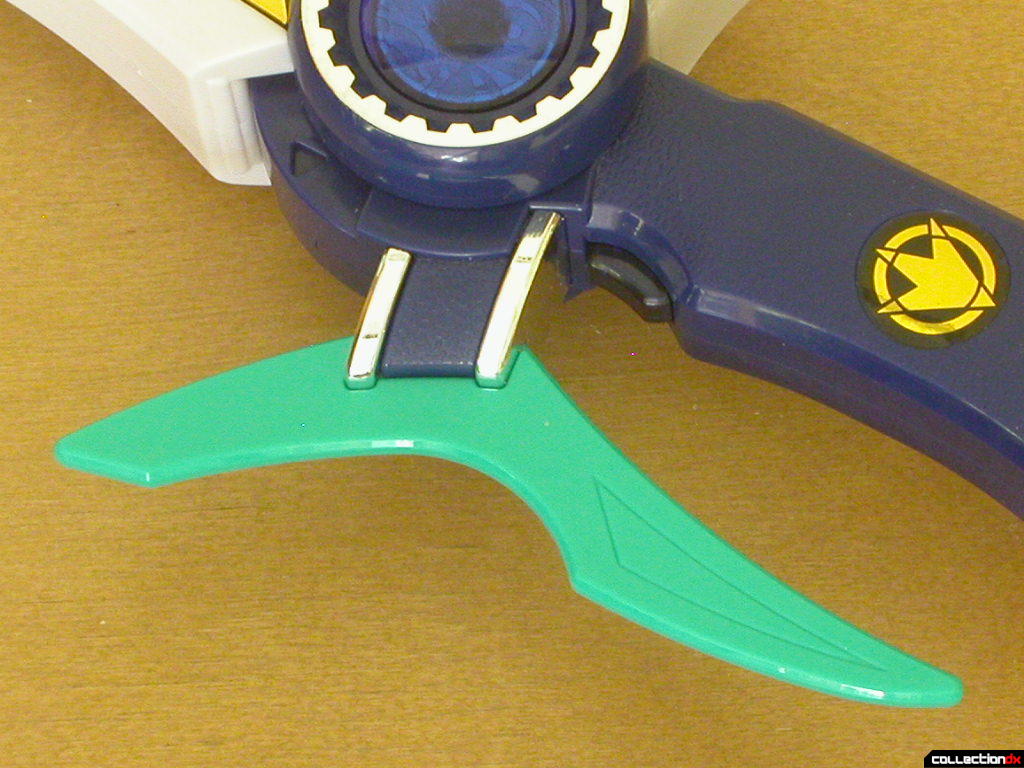 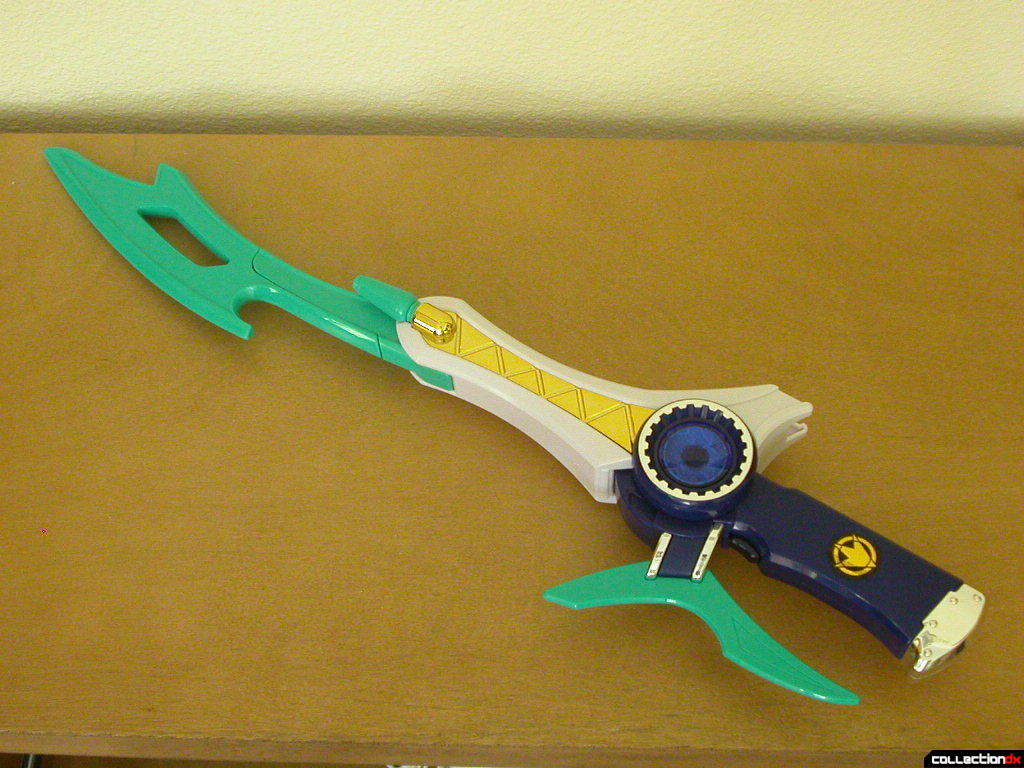 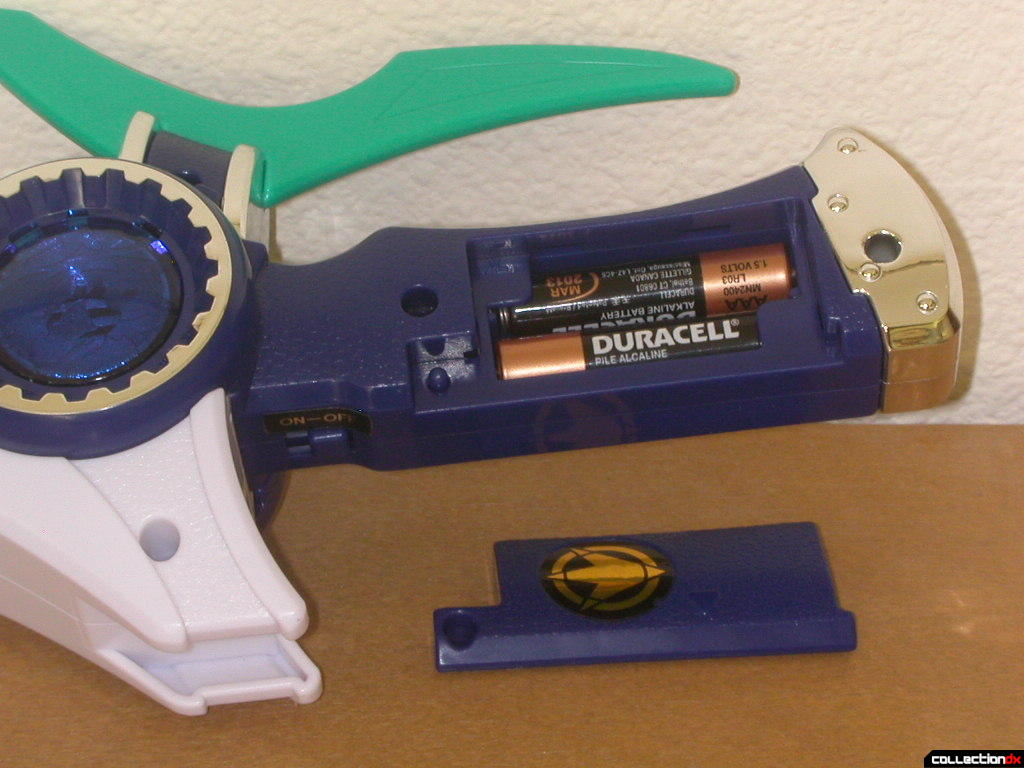 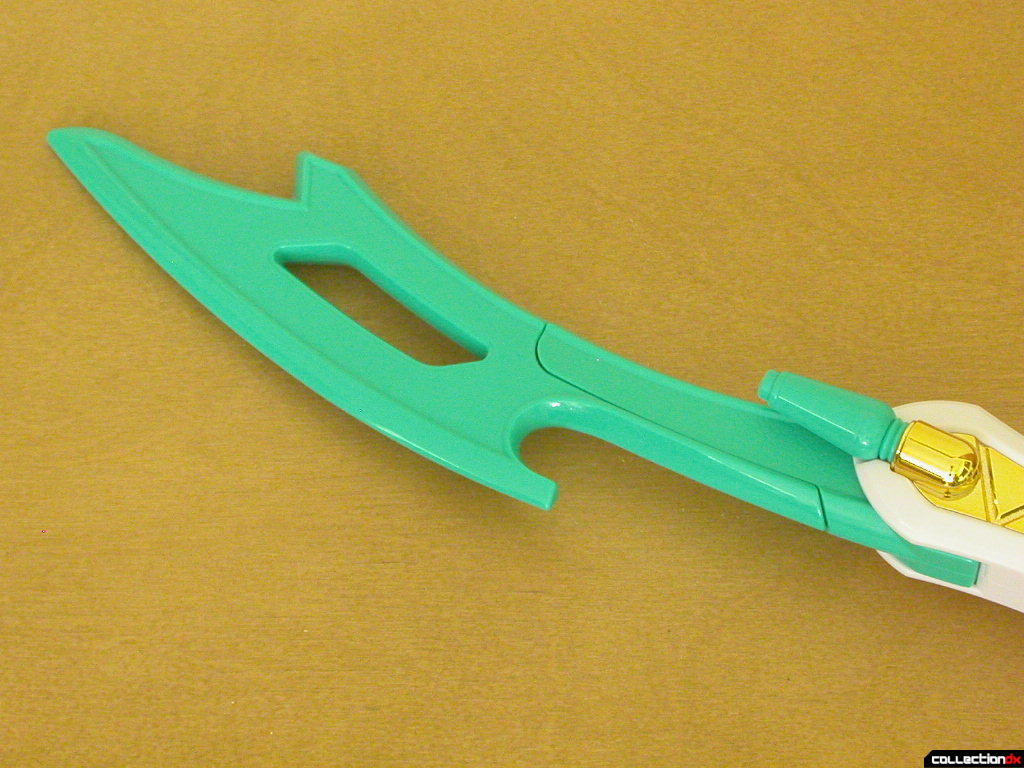 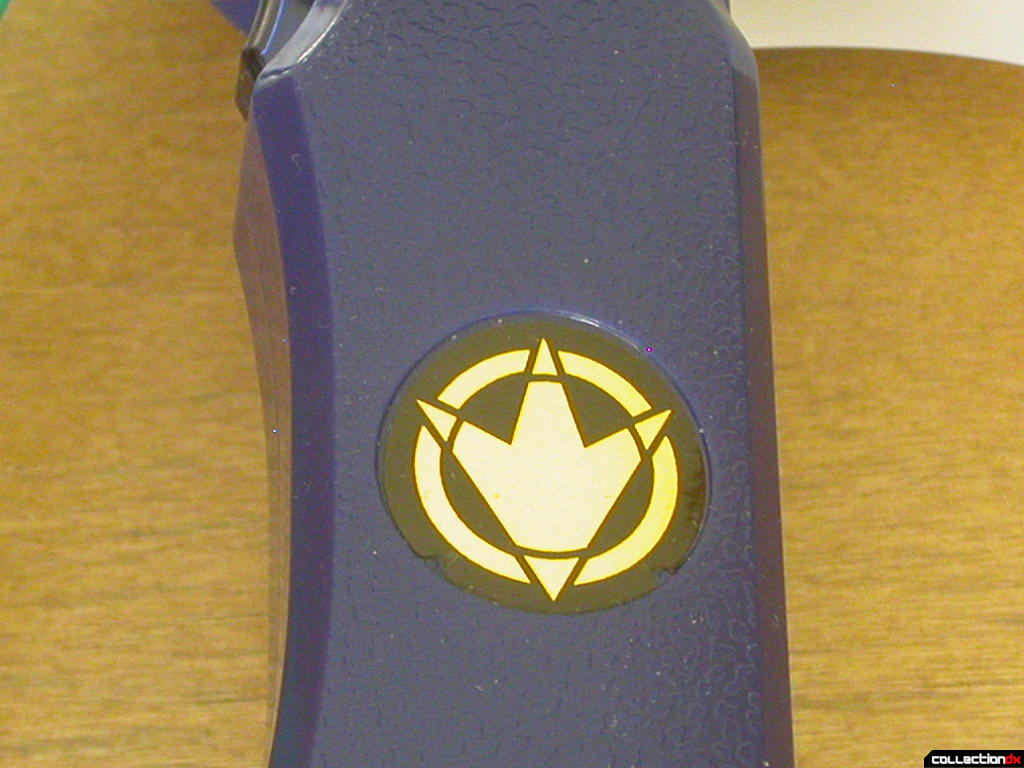 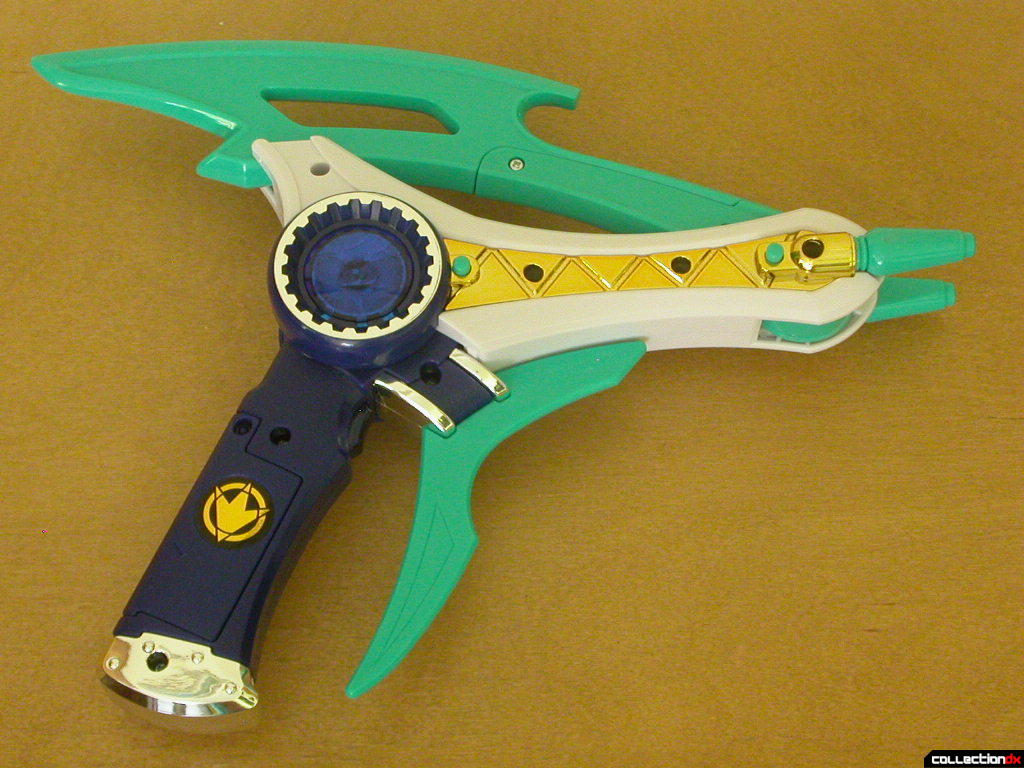 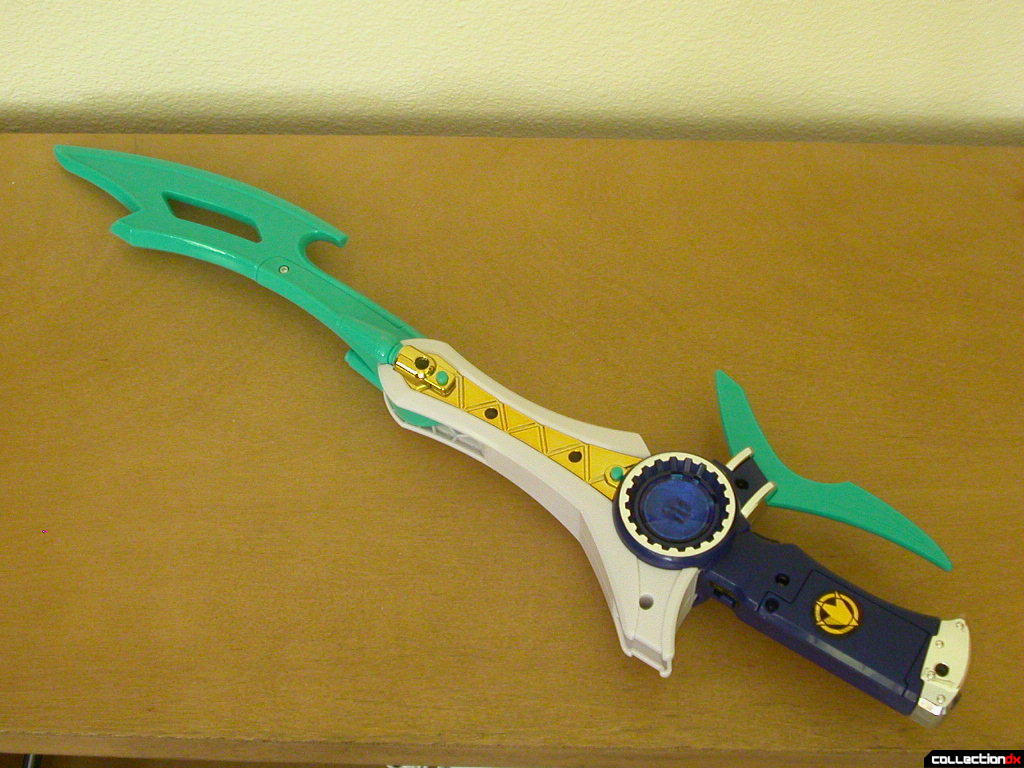