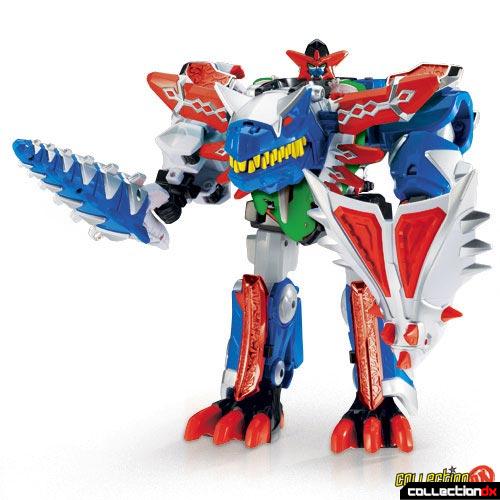 Bakuryuu are not machines, but highly evolved dinosaurs from a parallel world that separated from Earth 65 million years ago. All of the Bakuryuu names are play-on-words, and have double meanings in Japanese that represent not only the dinosaur's name, but also the combat feature they bring to the battle. In addition, sometimes a Bakuryuu is referred to by a nickname given it by the Rangers or the villains.

The two Dino Plates are useless with this toy, and instead are to be used with the electronic Dino Brace, Dino Commander, Dino Minder, Dino Brace AbareMax version, and Styriser (each sold separately) transformation devices. As far as I know, all Dino Plates are compatible with equivalent morphers from "Power Rangers Dino Thunder", though sounds may vary from the original versions. The Dino Plates will not be covered in this review, though an image has been provided here . 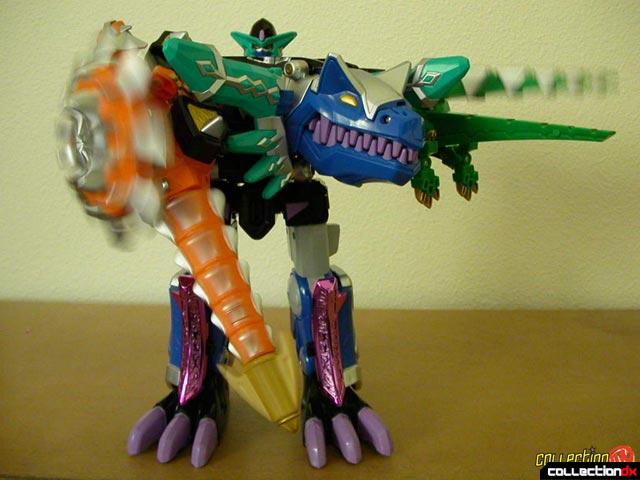 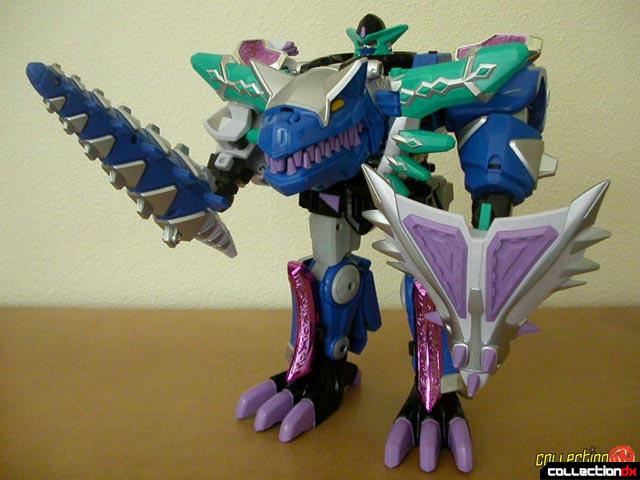 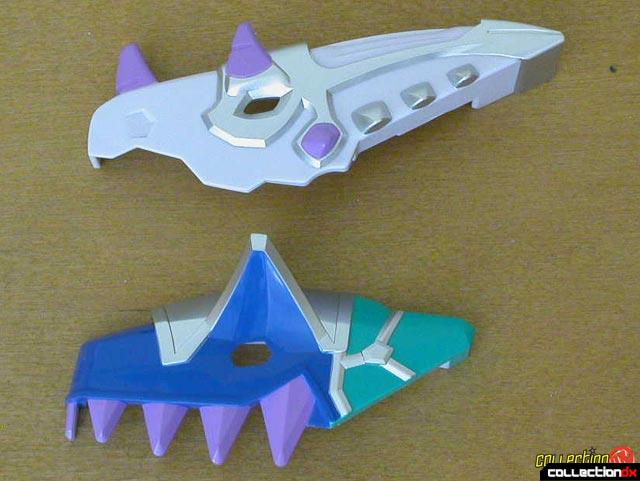 Bakuryuu Carnoleutus is based off of the real dinosaur carnotaurus, but is in essence the same as the Bakuryuu Tyrannosaurus from the AbarenOh, except with a different color scheme and a different head design. However, that does not detract from it. The head is much more fierce looking with the turquoise crests on either side, and it has more teeth. The large protrusion above each eye adds well to the aggressive look.

Carnoleutus forms the head, torso, legs, and left arm of the BakurenOh. 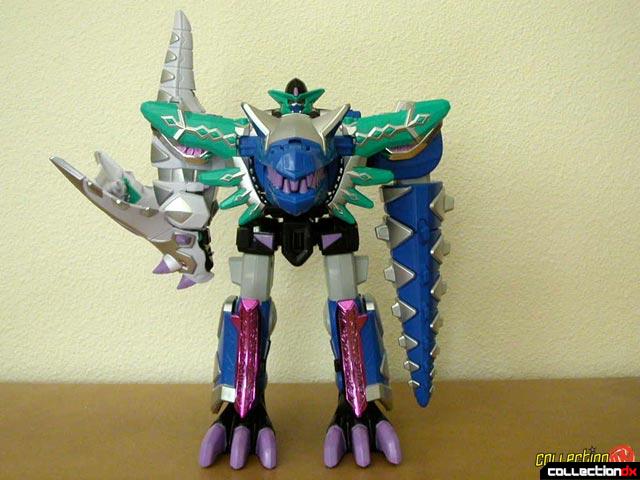 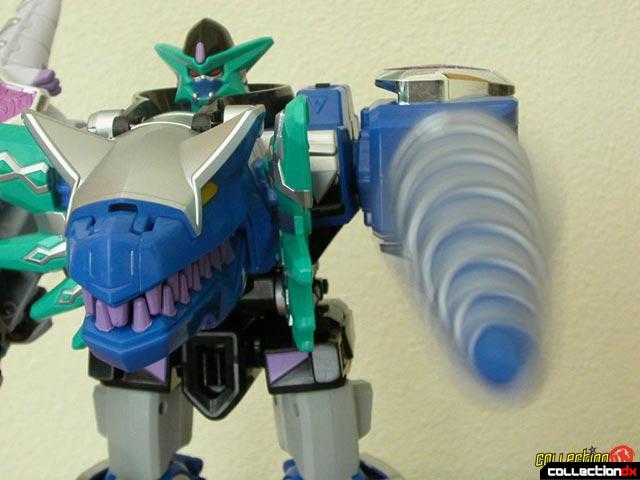 Bakuryuu Chasmoshieldon is based off of the dinosaur called chasmosaurus, but is in essence the same as the Bakuryuu Triceratops from the AbarenOh, except with a different color scheme and a different head. One of the things I really like is the large wide head that takes up almost its entire forward profile. It gives it a somewhat proud or honorable stance like it's wearing some sort of royal headdress. Unlike the Triceratops, Chasmoshieldon's horns aren't nearly as long, and cannot move or grasp things. 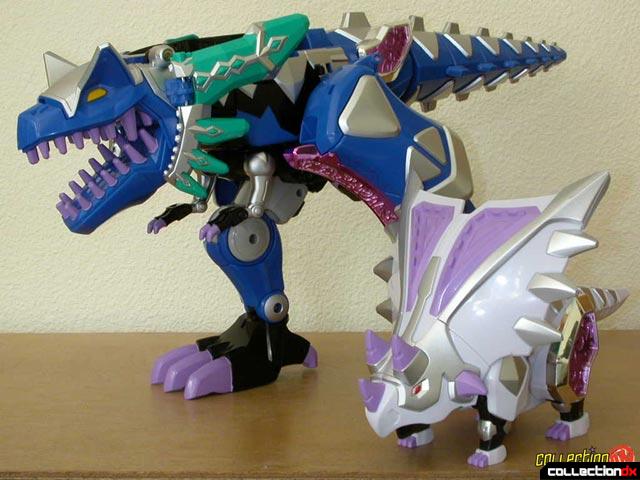 Separately, the Carnoleutus steals the show with its larger size & mass, surprisingly poseable legs, and battery-operated action. The mouth has limited movement, and the two small fragile arms under the body almost go completely unnoticed. It can balance on its own, though in some stances just barely on a hard surface, so don't even try on a carpet.
The Chasmoshieldon just sits there, and offers no real playability aside from its small black beak-like mouth. The legs can move, but that is only because it's needed for the transformation. However it's very stable on a flat or carpeted surface.

The special feature of this toy is the spinning tail drill. At the base of the tail on the top of the Carnoleutus is a black three-way On / Off switch. Pushing the switch to either the A or B position will turn the electrical motor on, and start the tail spinning one way or the other. Moving it to the center turns it off.

The BakurenOh combination mirrors the AbarenOh's except for the missing Bakuryuu Pteranodon. The little arms beneath the Carnoleutus are easy to forget, and could possibly be broken if they're not moved out of the way. The hip design and how it changes is clever, but it can be a little frustrating to have the legs move when they're not supposed to. Because of the way the Carnoleutus' head was designed makes it very tricky if you don't do it in exactly the right sequence. Personally, I think that part of the BakurenOh's change could have been refined a little. 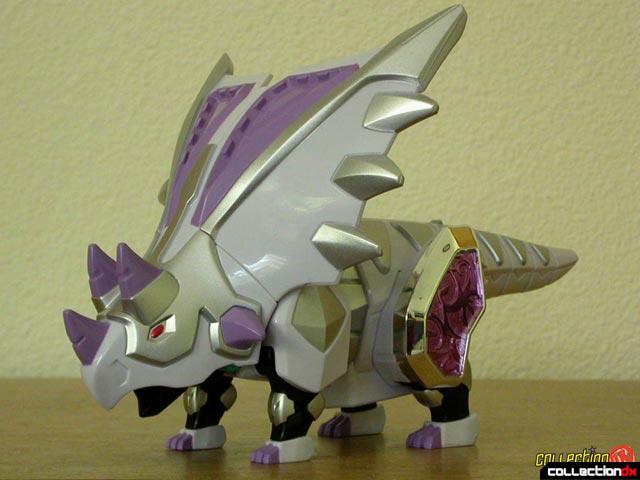 The Chasmoshieldon is even more simplistic to change than its Triceratops cousin from the AbarenOh. All you do is flip up the four legs and close the mouth; that's it. Then you attach it to the free Bakuryuu Joint on the BakurenOh's right shoulder.

I know, I know- it looks a little off-balance with the long thin tail on the left side, and the huge shield-like hand on the other side. Both arms can be rotated forwards or backwards in 45Âº increments. As a solution to the chest's dramatic turquoise armor sections getting in the way of movement, they can be rotated forward all the way to make room for the arms.
The tail drill is still fully functional in this form, and can be pointed forward and turned only if the armored sections are moved first.

At this point on the AbarenOh, the change would be complete. However, the BakurenOh is a little different, so the changes aren't finished just yet. The tails from both Bakuryuu are removed and combined into the BakurenOh's sword, while the entire head assembly of the Chasmoshieldon is removed to become a large spiked shield. Either hand can use both weapons, though it's shown as holding the sword in its right hand and the shield in its left.

Now the BakurenOh's transformation is complete.

The one disadvantage to using the shield & sword mode is that the drill feature becomes useless since the motor does not have the power or force to turn the heavy shield. The AbarenOh can do all of these things as well, but the BakurenOh seems better suited to this form.

The BakurenOh is much more front heavy because of the larger head and the spike armor, but it will keep its balance easily on a hard flat surface. Again, to rotate the arms forward all the way, the spiky turquoise armor needs to be rotated forward all the way.

The head of the BakurenOh, like the AbarenOh, is kinda out of proportion even more than is usual with most Sentai robos. It can rotate all the way around in 45Âº increments, an advantage over the AbarenOh. I think a little more room in the Carnoleutus' head could have been made for the BakurenOh's.

The legs are the most disappointing of the entire toy. Though it looks cool, and considering their flexibility with the Carnoleutus, they do not have nearly the range of motion in gattai form. Only a little rotation at the knees and hips is possible, but it can't be balanced at all with these limited options. What was Bandai thinking!?

One of the advantages to being in the "AbaRanger" line is the use of Bakuryuu Joints, which enables the action features of the secondary Bakuryuu, which are sold separately. The BakurenOh already has one dedicated action feature in its tail drill, which uses up one of its two active Joints; the Chasmoshieldon's body covers the other, but has no motorized features of its own. Both arms are easily removable, and can be replaced with any of the four Bakuryuu Action Series toys-

-or the left arm from the AbarenOh. In addition, the BakurenOh is fully compatible with the turncoat Bakuryuu Top Galer & Stegoslidon from the DX KillerOh (sold separately).

One of the things that seems interesting to me is the use of non-functional Bakuryuu Joints. There are three of them in the BakurenOh- one at the waist, and two for the hips. So, if you want to get creative one day, you can mix-match different parts from the AbarenOh, KillerOh, and DX MaxOhJa (sold separately).

For those of you wondering what the differences are between the DX Bakuryuu Gattai BakurenOh from "AbaRanger Deluxe" and "Bakuryuu Sentai AbaRanger", and its English-speaking counterpart, the Deluxe Blizzard Force Megazord (aka BFM) from "Power Rangers Dino Thunder", get ready for a big shock.

The BakurenOh does make a cameo in the "Power Rangers Dino Thunder" episode "A Test of Trust" towards the end of the series, but it is short lived, and gets only about 15 seconds airtime. The two Bakuryuu, which compose the BakurenOh, are not seen or acknowledged. Instead of being half-machine/half-dinosaurs like the other Dino Zords, the renamed Replicant Zord is nothing more than a decoy created by the evil dinosaur-mutant Mesogog to distract the Rangers while one of his monsters regenerates itself.

I attribute this great loss to bad plot writing, and not much intuition, just as the Blizzard Force Megazord could easily have been released to English-speaking countries without any modification.

For some reason, deluxe Super Sentai robots seem to be allergic to having poseable legs (and elbows for that matter). The AbarenOh and BakurenOh had much potential here, but something went awry during design phases. Also, general size is a bit of an issue- the Carnoleutus' tail could have been a little longer/broader, its head could have been rearranged to fit the BakurenOh's torso a little more snugly and shrunken a tad more. These things seem to get smaller and more out of shape each year when they should be doing just the opposite!

Overall, I like this toy, and I got it instead of an AbarenOh because of its alternate styling and wicked paint job! It is worth it if you can find them, though the DX Bakuryuu Gattai BakurenOh was of a rare breed in Japan to begin with.