The Deluxe Wild Force Megazord is the first Megazord released as part of the Power Rangers Wild Force line. In Japan, the toy was known as the DX Gaoking from Gaorangers.

The Megazord consists of 5 Power Animals: 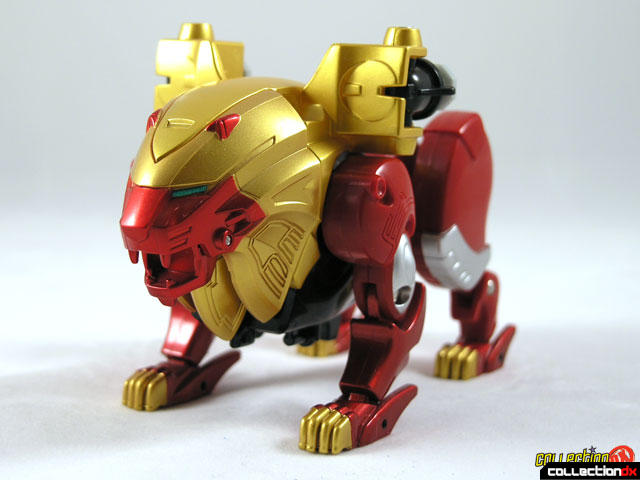 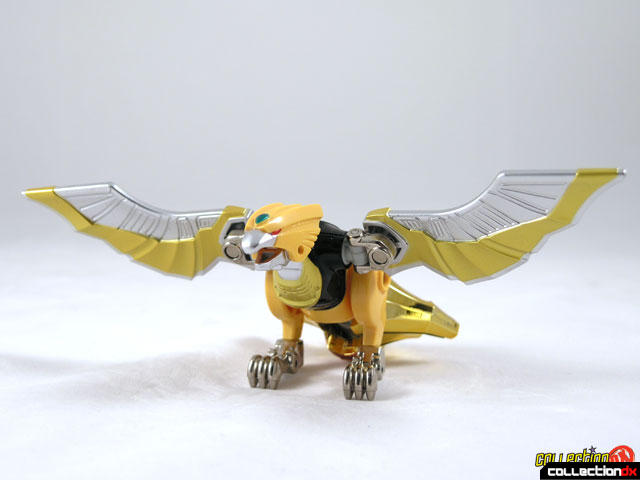 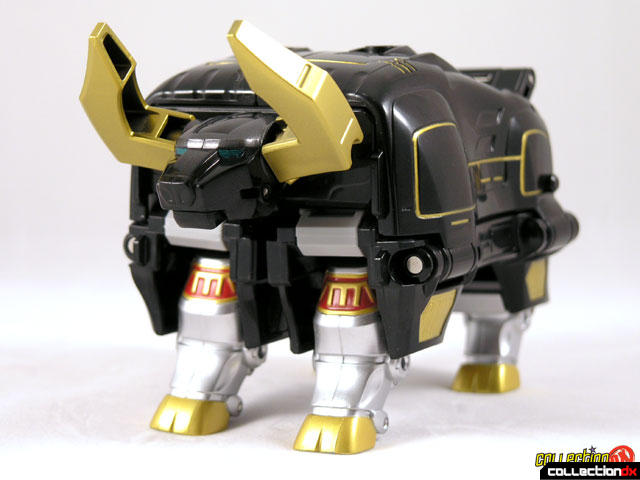 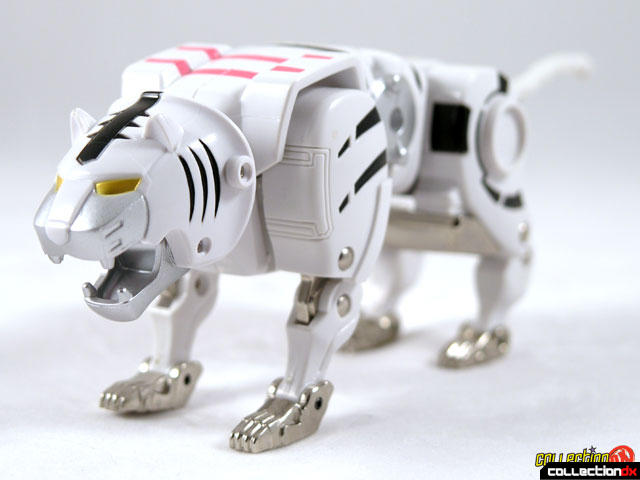 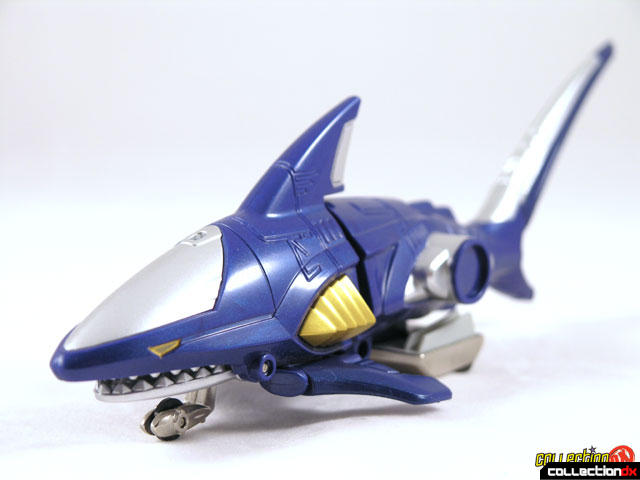 Each Power Animal contains a significant amount of diecast metal. The combined Megazord is really, really heavy. There is so much metal in it, that in Japan, the toy was included in the Chogokin line. The DX Gaoking has the Chogokin number GD-21.

The Wild Force Megazord is probably on of the best Megazords released, in my opinion. The toy is so old-school. It has loads of metal, with only articulation at the shoulders, elbows and wrists, with a classic robot style. The tail of the Blue Shark becomes a weapon that fits in the right hand. 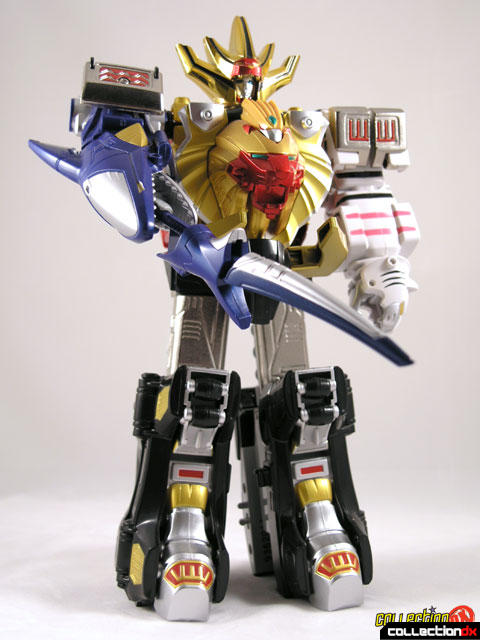 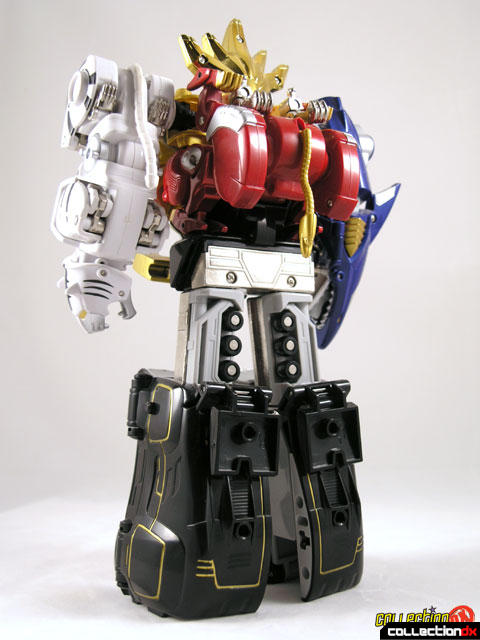 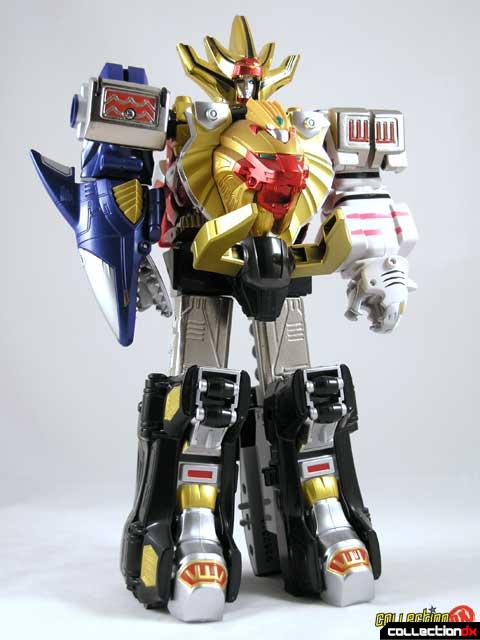 The 5 Power Animals can combine to form the Wild Force Megazord, but the fun does not stop there. All the Wild Force Megazords, and several subsequent lines, share a common arm connector joint. This means you can connect the giraffe, the polar bears, the deer- any number of combinations can be made, provided you buy the additional animals.

In addition to Megazord mode, there is also a carrier mode, where the Bison unfolds to three times its length and carries the other Power Animals. Unfortunately, some of the Power Animals have no defined place to sit, so they fall off easily. There is a stand included to place the back two animals on (not shown). 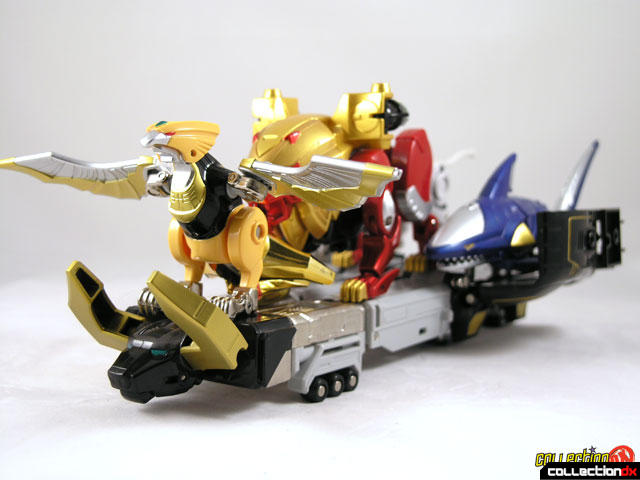 So what is different between the US and Japanese version?

That's all the changes as far as I know. This is a great robot toy, even if you are not a Power Rangers fan. A must-get toy.

I really don't understand how this can be considered a "great robot toy." Maybe if it had been released in the early '80s, but in 2002? Not a chance. It's an unposable brick of a toy, and Hasbro/Takara had just shown that combiners don't need to be that in RID/Car Robots. Hell, even the reuse of the old Combaticons molds were better than this lump.

By the way, I got this toy for free. I really can't suggest anyone spend actual money on it.

From your post, I can assume you liked Transformers better...

I don't think the toy is an unposable brick, and since you got the toy for "free," I'd assume that you missed some of it's features. Now, Transformer toys in the 80's were bricks indeed.

Take note that opnions differ from each person and I also consider this as a good toy compared to other Transformer toys.

In several ways, the Wild Force Megazord (or rather the Gao King) was both a revolution and evolution for Power Rangers/Super Sentai-

-and Bandai really hasn't looked back since. Some say "GaoRanger"/"PRWF" was the death of the old-school design style of their respective franchises, and can be considered the beginning of a new era for them though this is not officially recognized.
I would agree that there was a significant shift around this time- coincidentally, for the new millennium- and that the designs of all mecha since 2000 are not as comparable to their predecessors as far as what they look like and their features.

While Transformers(TM) usually has more steps/detailed transformations, I find it hard to compare them to PR/Super Sentai because they are two completely different animals.
------------------------------
CollectionDX Staff

Great review. I just happened to find one of these on ebay and after reading the review I had to buy . It is definitely one the the best Sentai/PR Robot designs.

I didn't know what Wild Force was so I always thought it was from another country(I knew it wasn't a fake zord as my parents got it from Toy's r us in winter 2001) until Wild Force aired that spring(lol). My first Wild Force Zord set I got has a completely different color detail from my second set. My first set each Zord has a more metallic color look on each Zord(Metallic Red, Metallic Blue, Metallic Yellow, basically all the colors have a Metallic finish to them instead of the regular color finish.

The metal on the Tiger and Cheetah Zord doesn't look like the one in the picture above, the color on the metal shoulders have a more metallic look. I could never find someone with the same kind of Zord set as mine. I wonder if I got a rare release Zord.

In 2002, I asked my parents to buy me the Predazord and Kongazord for Christmas, but they mistakenly bought me the same zord again. This is when I notice it had a completely different more metallic look too it. My friends zords all have the same look on them as my second one and the one pictured above. I tried googling it and everything I can't find no pictures that match its look.

I would post pics, but my Wild Force Megazords and other Zords I had got as a kid was mistakenly sent to storage. I been looking at your videos and reviews and this jogged my memory.

Are you referring perhaps to the Deluxe Animus Megazord, which JoshB also reviewed?