The Brave Express Might Gaine aired during the 1993-1994 Japanese television season and is part of the Yuusha (Brave) series of anime shows produced by Sunrise. The Brave Express Might Gaine takes these newly-crafted themes to their logical conclusion. Here the robots are no longer "spirits," but have personalities granted by advanced Artificial Intelligence. These robots were designed and built from the ground up by the late father of the main character: billionaire crime-fighting teenager and railroad magnate Senpuuji Maito. He acts as a Bruce Wayne character of sorts, taking command of the Brave Express robots in the field and fighting crime himself on the front lines. A unique further step is taken by separating the antagonists into multiple criminal factions, some at odds with each other; Might Gaine especially stands out from much of the Brave Series by taking a darker approach with the actions of some of these criminal overlords, as they cause severe harm to others in the midst of following their own ambitions.

Great Might Gaine Perfect mode is achieved through the combination of the 3 figures shown below. The figures are: Might Gaine, Might Kaiser and Might Gunner. I will be covering these figures individually in future reviews from this series. 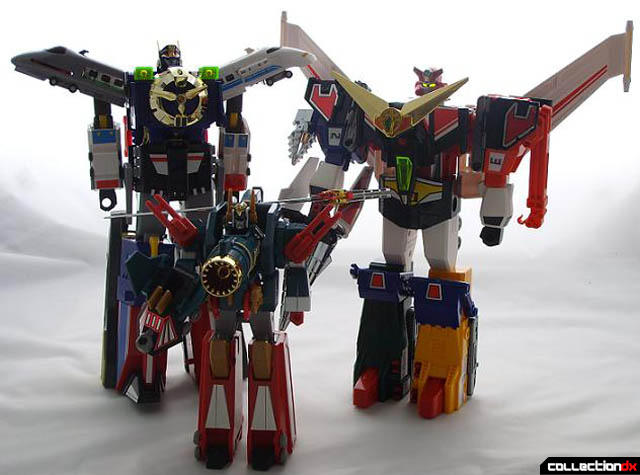 Before I get into Perfect Mode, I wanted to show you Might Gaine with Might Gunner pre-combined. Note that the Might Gunner I am utilizing in my review is a Takara re-release from a few years back. The Takara piece works and looks beautiful with the Sonokong version of Great Might Gaine 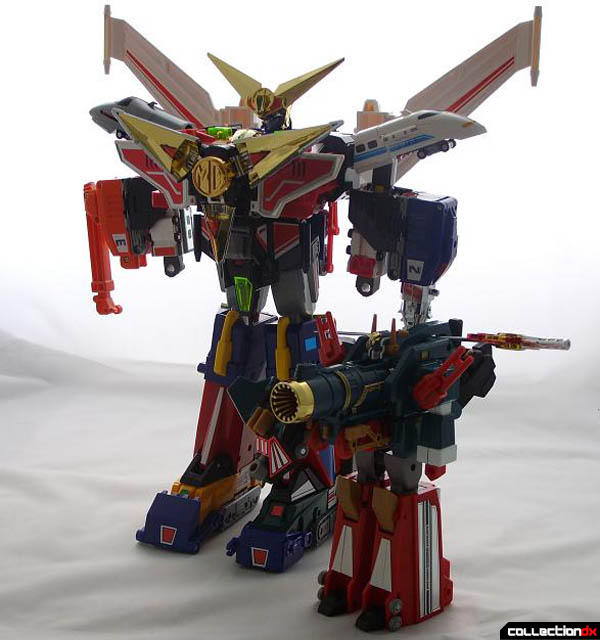 The first striking feature, well at least for me it is how the chest piece of Might Kaiser becomes the head crest for Great Might Gaine. In my opinion, it looks odd and kinda overwhelms Might Gaine's tiny head. 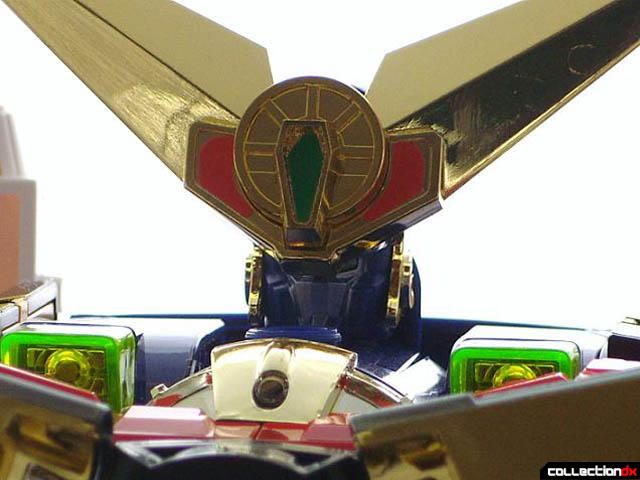 Great Might Gaine is an impressive figure, standing at almost 13" from head to toe and weighing in at a whopping 3 lbs of heavy plastic goodness! Articulation is limited to the shoulders and elbows. The articulation does allow Great Might Gaine use of his single or dual swords. 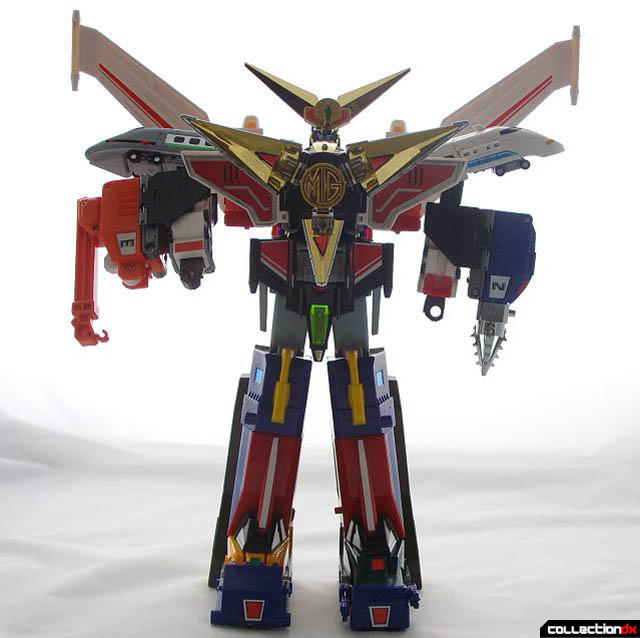 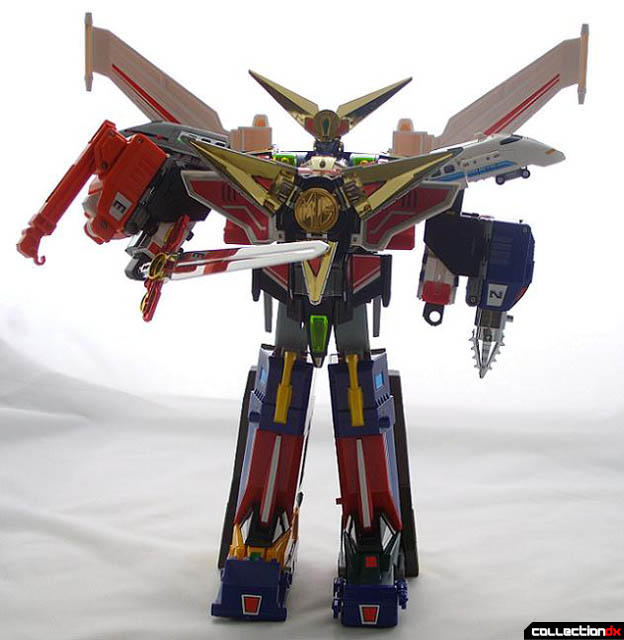 Finally, we have Great Might Gaine in Perfect Mode. Perfect Mode increases the height of this huge figure by 4", making this figure stand a height of nearly 17"! The weight is now up to almost 4 lbs! You gotta admit, it's a pretty impressive figure. 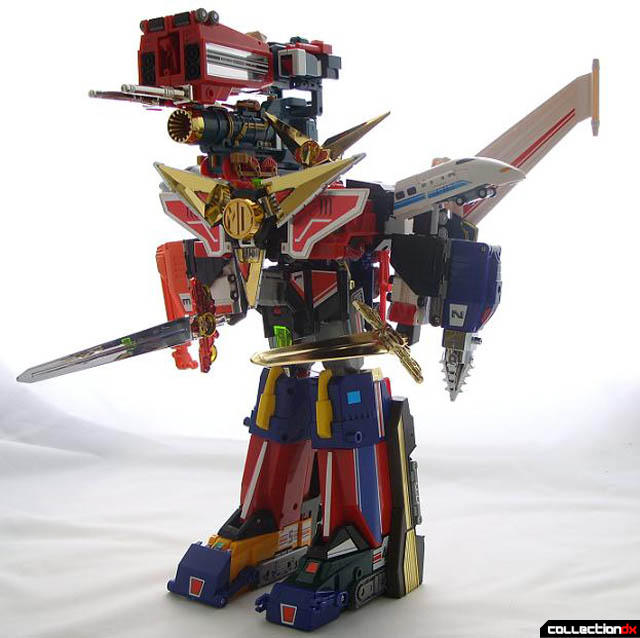 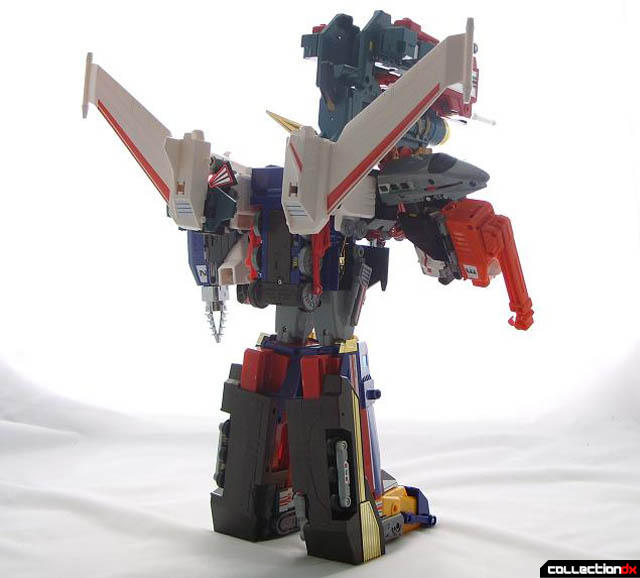 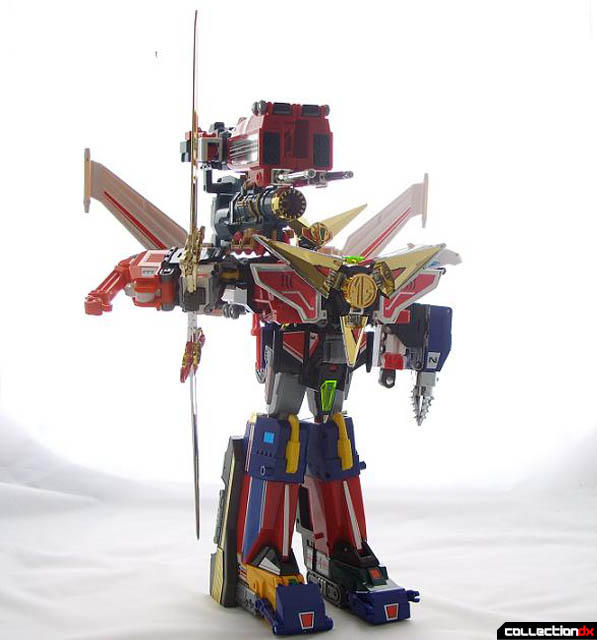 I have to say that I do like this figure overall, even if I do find some of the proportions to be a little odd. The figure has some serious shelf presence and a ton of play value. My advice is to track down all three figures mentioned above to create your own! Happy hunting!

10 comments posted
Looking forward to it

Just received my Takara Mightgunner yesterday, added to my Sonokong Mightgaine and Takara Mightkaiser (on its way to me right now), I'll have a replica of this very item myself. I do like the somewhat muted colors on the Takara version of Mightgunner. I may have to track down the reissue Mightgaine as well. Thanks for the great review!

Boy, Takara do love having train as shoulder...

I think a more accurate statement would be that Takara loves them transforming trains period!

Hey i have just gotten this for christmas. How do you get that pain in the rear crest to stay on might gaine's tiny nogging with out it falling off?

I remember reading somewhere that an executive at bullet train company was a fan of previous Brave cartoons, and arranged for his company to sponsor the series. Brave Express Might Gaine--where all the hero robots are transformed trains--was then designed as thanks.

I can't verify this. I read it so long ago I couldn't even tell you what website I heard it on. If it's true or not it still makes a good story.

You are talking about the Takara Brave revival set that came out a couple years ago. Yes, the Might Gunner I have in this review is from the Takara set you speak of. MightKaiser and MightGaine are the Sonokong versions.

They are Brave Revival reissues by Takara with darker colours overall and less stickers to better match the tv versions. They were all released individually (with Might Gunner including an extra Dorinken/Sword for Great Might Gaine's finisher in the last episode of the anime) or as a full boxset which lacks the extra sword.

Great Might Gaine is certanly a force to be reconised. This guy looks feakin' huge and can demolise a lot of the planet, if Maito Senpujin piloted him for evil, but fortunatily he's a good guy alone with Great Might Gaine. The only thing I will say though of which everyonewill agree with me....that blasted antenne is WAY oversized. It looks better in the cartoon, on a toy it just looks....as you put it Shogundan, odd. Just...odd. Superb review and the pictures you took were great. :)