In 2010 I reviewed of a buildup of my original Nitto 1/20 SF3D Gustav model kit that I bought when I was a kid in the 1980’s. SF3d kits were notoriously difficult to locate here in the US, and this is coming from somebody who did not have a problem locating original Japanese model kits. Unfortunately, I only managed to find two SF3D when I was kid and I always felt I missed out on something great. 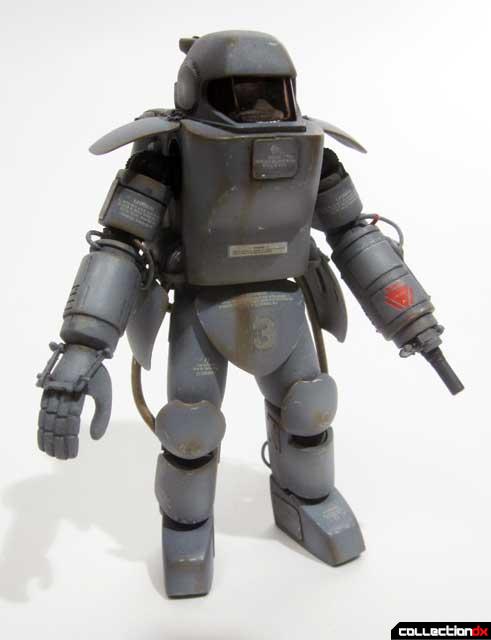 SF3D, known today as Maschinen Krieger/Ma.K, having a great renaissance of sorts due to companies such as Hasegawa and Waves producing new and exciting kits when previously it had been prohibitive to buy original and highly sough after kits. A good time for all if you ask me. 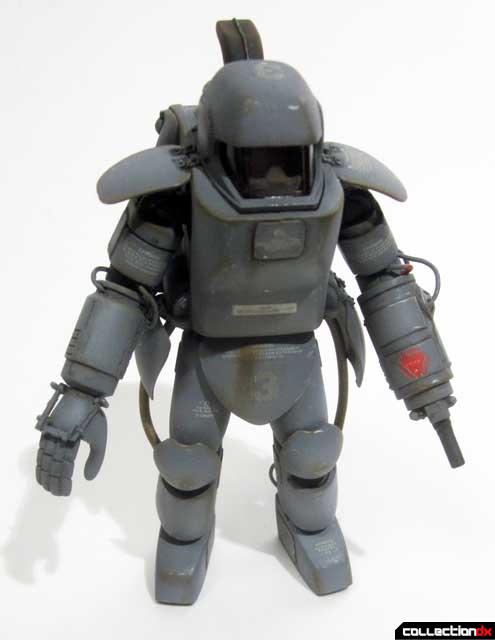 But this renaissance of sorts is also having an unintended drawback. Little by little original 1980’s Nitto SF3D kits are starting to fall by the wayside in favor of the modern kits and the Nitto reissues. Finding good out of the box reviews of the original Nitto kits are actually difficult to locate. There many reasons why I feel these kits need to have there day in the sun next to the current issue kits. 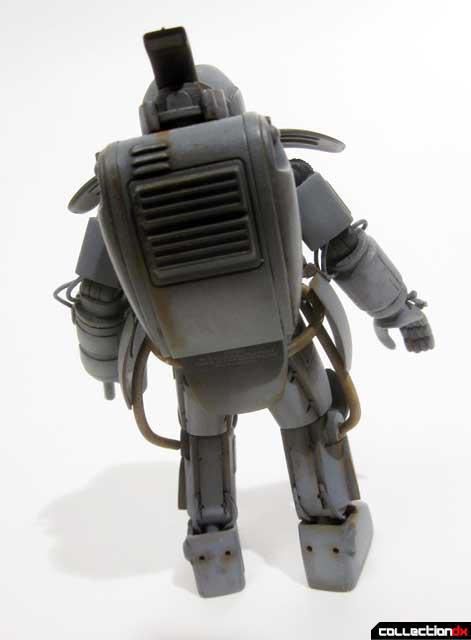 First, 1980’s SF3D kits were released with different tech cards, paint schemes and decals than the current releases. Second, since most SF3D kits are modified, model kit builders who have not built an original kit might not be familiar with what actually came in the box. Third, as time goes on, there will be less original kits available, documenting the original kits will be helpful to builders of the future who may not get a chance to build an original kit. Finally the kits themselves are tooled different than the current WAVES kits, enough so that I know kit builders will want to know what the differences are. 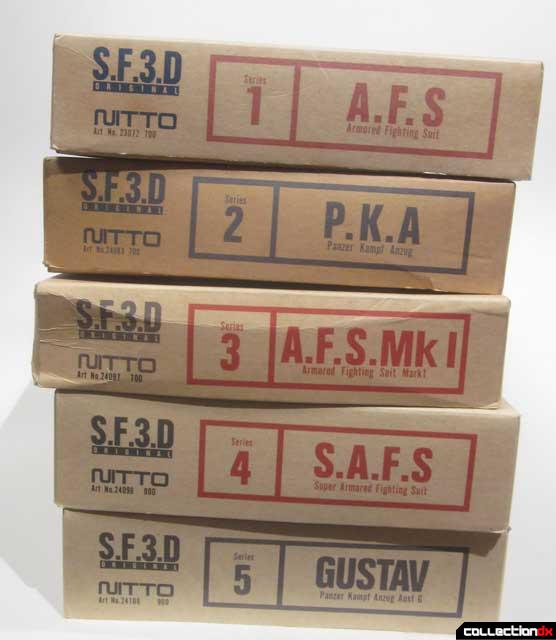 With that I have a goal of building and reviewing all 21 original 1980’s Nitto SF3D original series kits for CollectionDX. Over the last year I have been locating and purchasing the first five SF3D kits with the purpose of building and reviewing them here. Who knows how long it will take or even if I can locate and finish all 21 kits but I like large goals. So with that I introduce the first kit in the series: AFS MKII 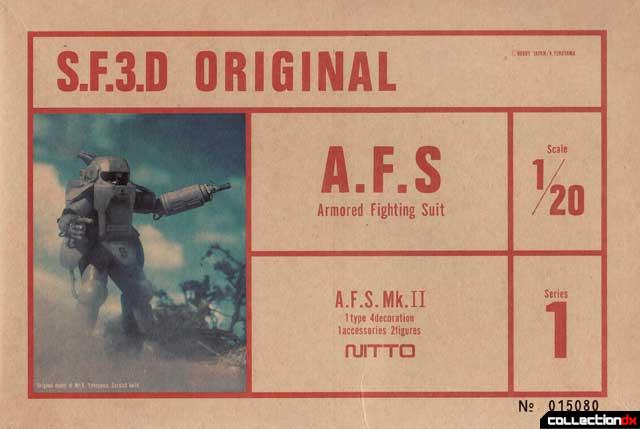 The A.F.S Mk. II (Armored Fighting Suit) was the first numbered kit released for SF3D. In SF3D lore, this was the first successful armored suit in the war between the mercenary forces and SDR forces. It is also the predecessor design to the iconic SAFS armored suits that even the most passive anime fan would be familiar with. 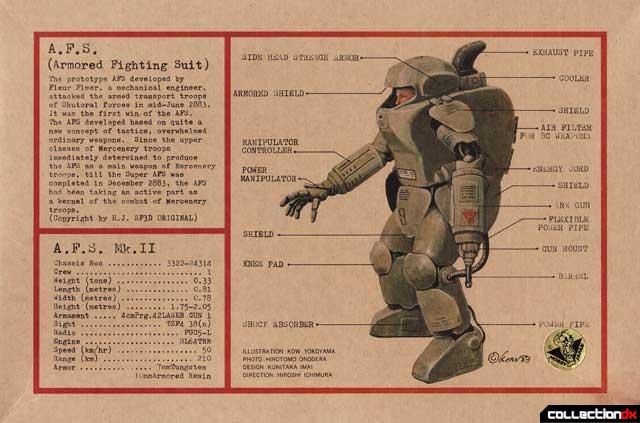 For only the paltry sum of ¥700 the purchaser received a cryptic brown box containing some of the most advanced tooling and designed model kit of its age. These kits can be considered the first multi media model kits as not only did it contain some finely molded sprue but detailing wire, metal springs, poly caps, not to mention a elaborate full color tech color scheme cards and a sheet of decals for four different versions. Two heads, a male and female were also included with the kit. Optional frame fuel tanks are also included. 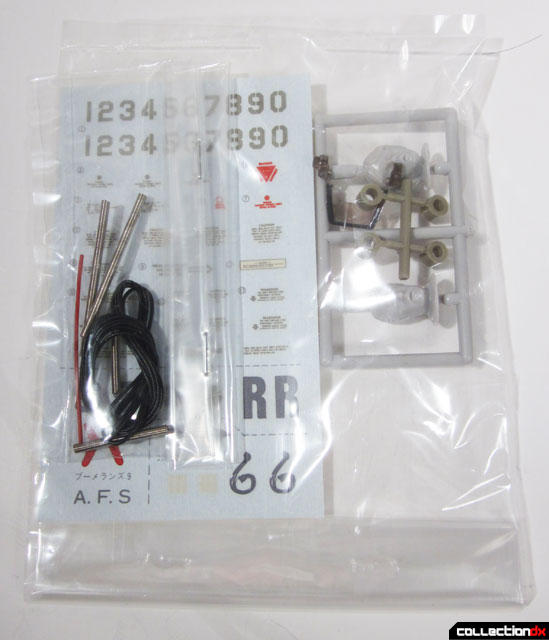 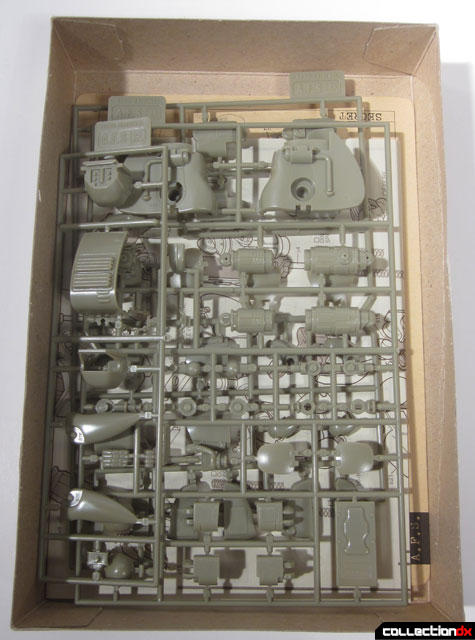 The hard part with these kits is figuring out what scheme you want to build as the colors were always interesting choices. 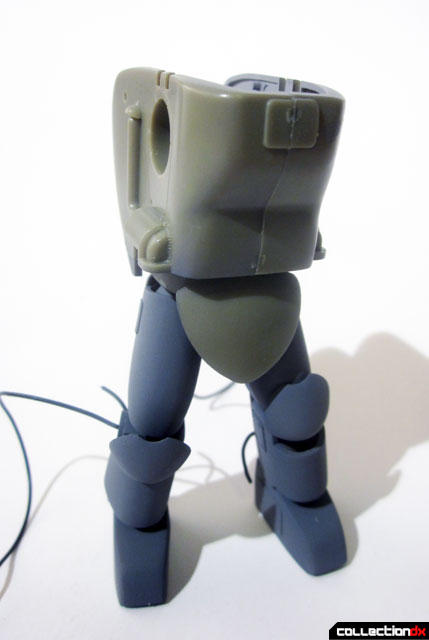 Building these kits are not very difficult, and the fit is exceptional with usually no gaps to fill of any sort. My only issue was not measuring the wires for the feet long enough, resulting in the wire not reaching the hole it was suppose to fit in. Nitto does give you extra wire so just over measure and you will be fine. 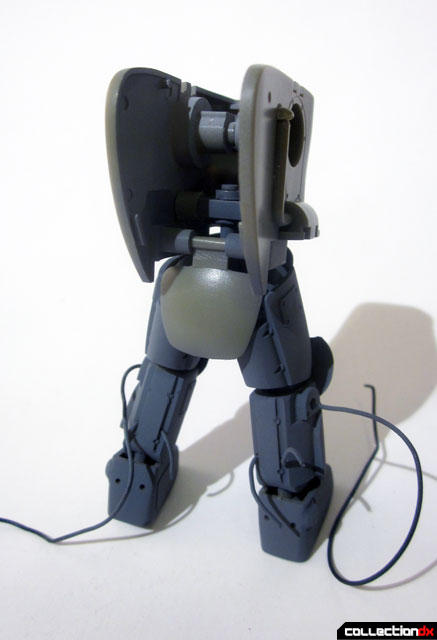 Keep in mind this is one of those kits that you actually need to follow the instructions, as there are many tricky places where the wires need to connect to. I actually suggest that you build the legs and body separate, as they will be easier to paint in the painting process. There is a locking washer that you use to connect the legs to the body and it can easily be put in after the paint and before the decals. 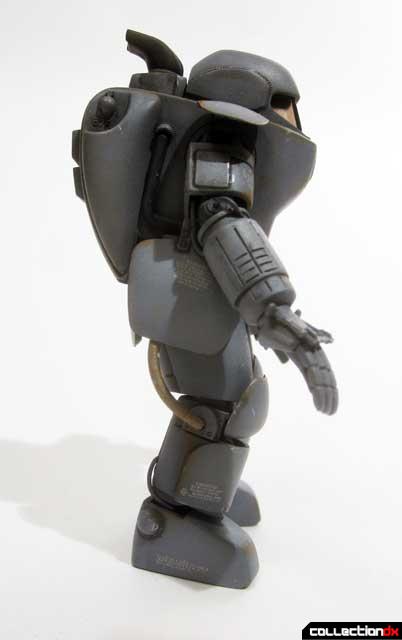 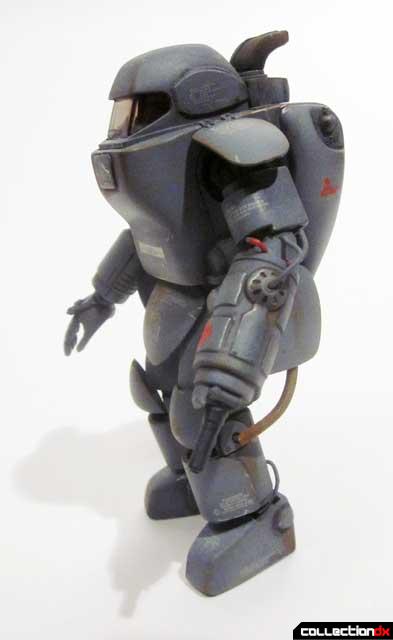 I believe the most innovative feature of SD3D kits are the legs and how the armor stands on its legs. Model robot kits before SF3D had a very rigid stiff stance while SF3D kits had a very natural stance and leg movement. How the leg joins work, especially at the hips is premier engineering and really one of the subtle highpoints of these kits. I actually surprised nobody has reproduced these leg joints for other mecha kits. 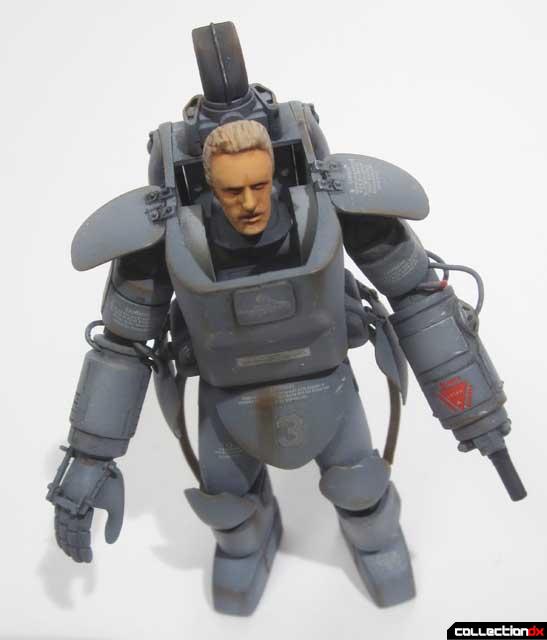 You might be surprised by the lack of interior of the two AFS kits that were originally released. The “figures” that were provided are actually just heads that glue onto a shelf in inside of the body. Although you can take the canopy off, it is suggested that the canopy is keep on as only the head can be seen through the small smoke
tinted visor. 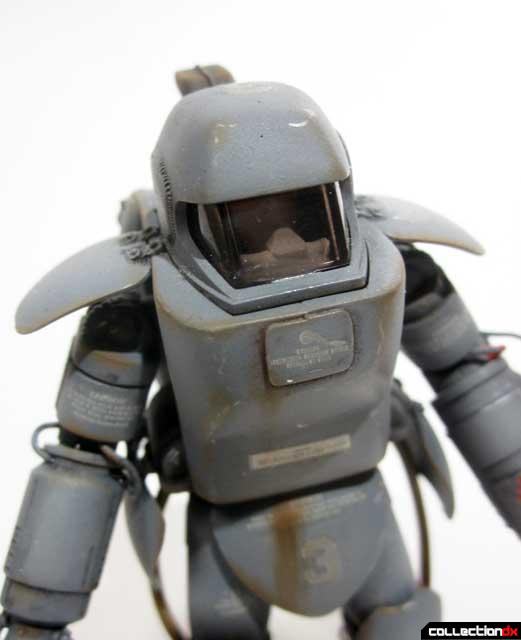 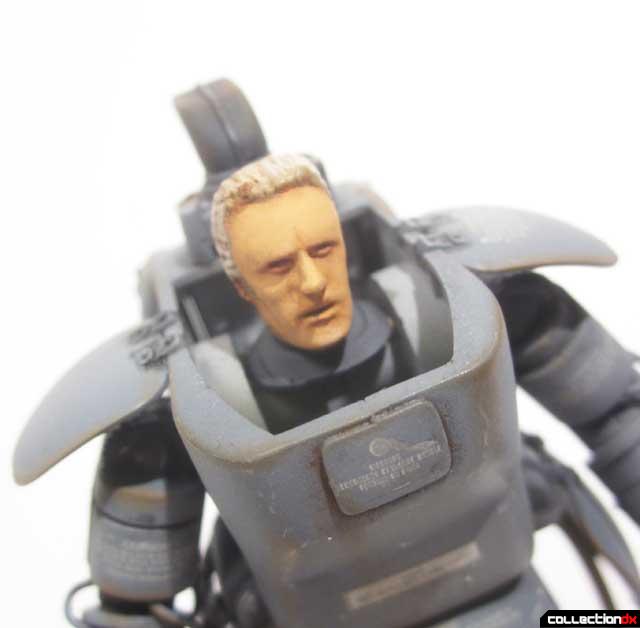 I am not really a figure painter but I now have a couple great figure painters assisting me with my figures, I think I did OK this time around although next time I promise I will paint some eyebrows! As you can see the figure sculpts are excellent and just another reason why figure painters are attracted to SF3D. 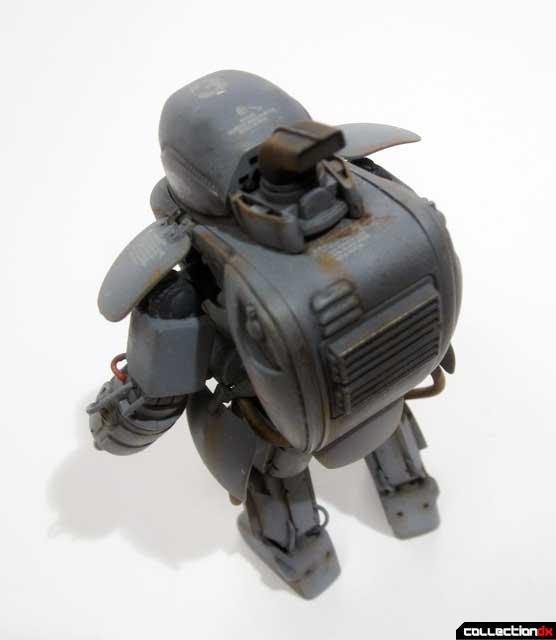 The only real option is two fuel tanks that glue to the side of the body frame; I added them to my kit as it makes a nice change to the otherwise very sparse frame design. 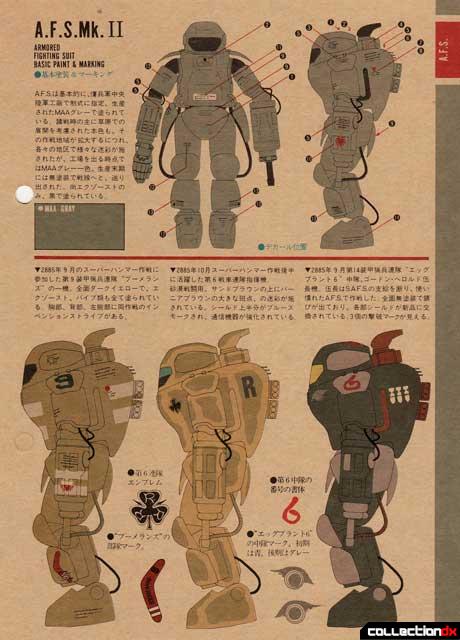 Four paint schemes are included with the kit including extra numbers to assist in designing your own marking. For keeping with the out of the box feel, I used the grey scheme as seen on the box. 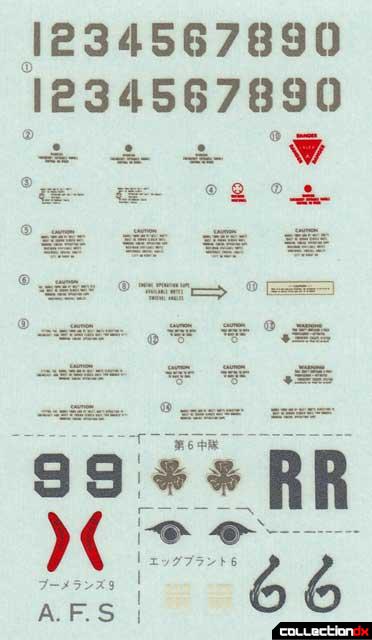 I used Tamiya paints and did my usual post shading. When dried I applied clear gloss for the decals. Having already built three SF3D kits I am finding out the weakest aspect of these kits are the decals. I do not know if it has to do with that the decals are old but they are very thick and they do not come off the backing paper easily, I usually have to soak them for a while before they come off. Once the decals are applied to the kit, they do not respond to setting solution well and have major silvering issues. Finally they do not often stick to the model. All three kits have had this problem. 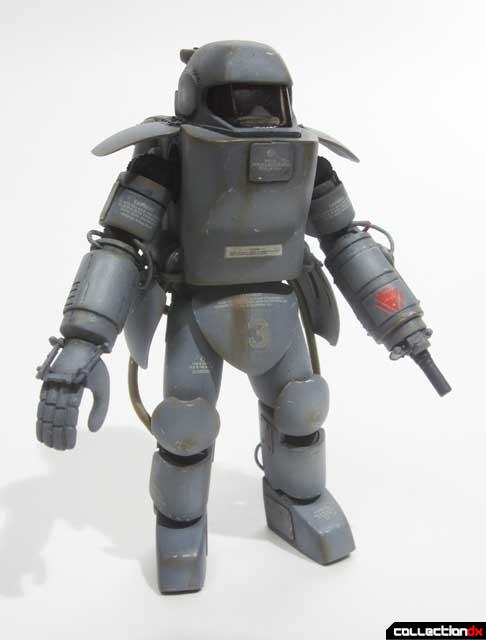 After a sealing the kit with a gloss and flat coat, I applied my usual oil paints wash and a silver pencil to top things off. I attached the final wire and spring details to the legs and did the final attachment of parts, including adding the smoke tinted window.

I always though it was odd Nitto chose to use dark brown smoke tinted windows as the windows are so dark you can hardly see the figure in the suit. Maybe the space rays were much harsher in the 1980’s as the current WAVES kits are a more acceptable tint color. Just an unusual feature of these old Nitto kits. 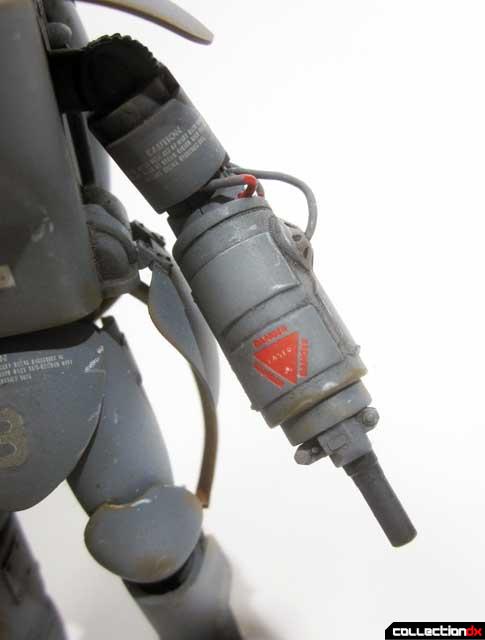 Now about the design of the AFS armor, its never really been my favorite Kow Yokoyama designs, I much prefer the SAFS and modified Gustav designs over the AFS design. Also to me, especially when I was young, the design was not very Japanese looking, as it looks more like an American Armor design, which tends to look more boxy. But to make matters more confusing I believe that why it stands out like it does compared to the other SF3D kits and other Japanese designs as well, which makes it an unique addition to the Ma.K universe.

This box was sealed when I bought it and having never built an AFS before it was great to finally build an original kit fresh from a sealed box from the 1980’s. The AFS is still a surprisingly modern model kit 30 years later, and I am glad I am finally able to add one to my collection. These AFS kits are still relatively inexpensive to pick up today as many were made and picking one up would be a great nostalgic addition to your Ma.K/SF3D collection regardless if you are going to build it or just have it on the collector shelf.

©2012 Pictures and Review by Leonardo Flores and CollectionDX

Great Job!!
I love this entire kit line from the 80's
Remember them well along with the Dorvack kits child hood nostalgia
While I have never actually put one together
One of these days it may happen

I only wish I had the skill and patience to glue and paint.
I brought a Golion kit to build but he's still in his box. i just brought a gundum kit to and he even has me intimidated. Guess I should've brought a RG as a rookie.