Many times on CDX I have remarked, “I built a model kit of that in the 1980’s! I still have the parts, maybe I should do a build up of the kit.” What is a “build up” you might ask? Simply it is taking a kit that has already been build, taking it apart, replace missing parts and refinishing the kit. While this might seem unusual to some, there are many reasons why modelers would do this. 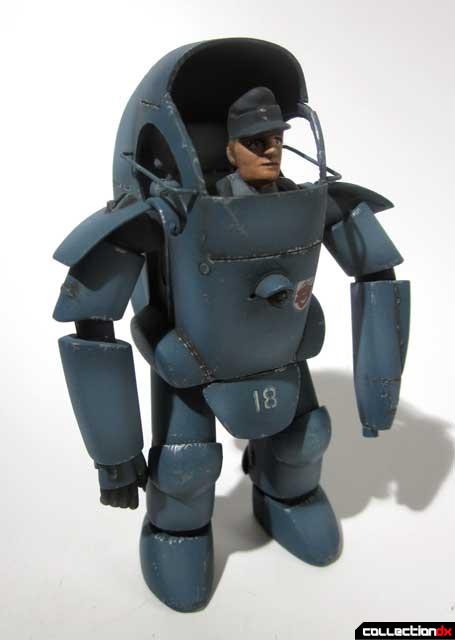 Rare original boxed unbuilt model kits such as Rommel’s Rod, vintage 1960’s Aurora Figure Kits and year specific car models can go for hundreds even thousands of dollars, especially if they have not been reissued. Purchasing an already built kit of the above could cut down the cost of the model kit that one has been looking to build for their collection. 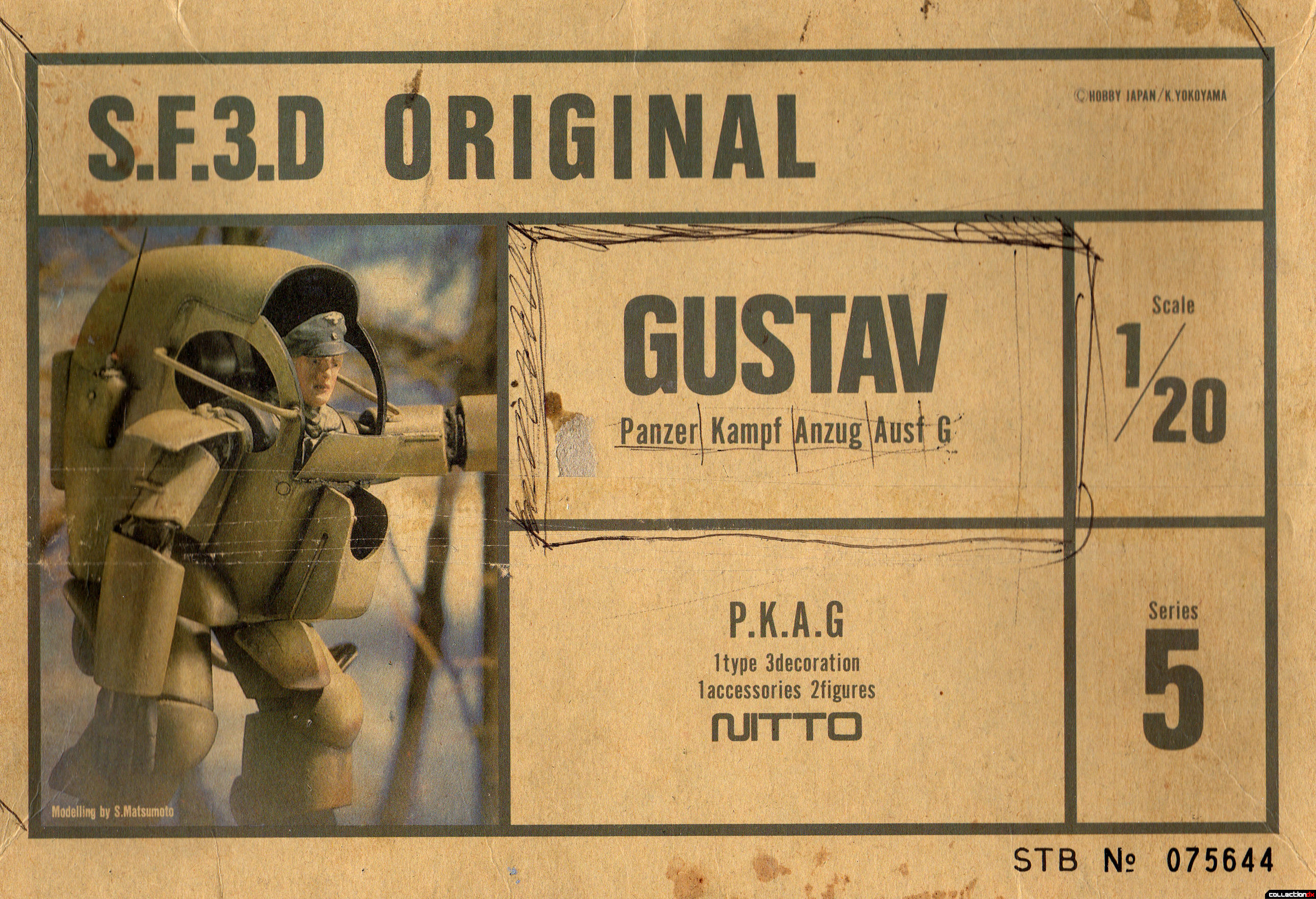 A few months ago I was itching to build an SF3D model kit. I remembered that I had a baggie somewhere with parts of an old original Nitto SF3D Gustav kit I built as a kid back in the 1980’s. Although not by any means rare, it was great to already have a near complete SF3D kit to take apart, rebuild, update with my current modeling skills and review for CollectionDX. 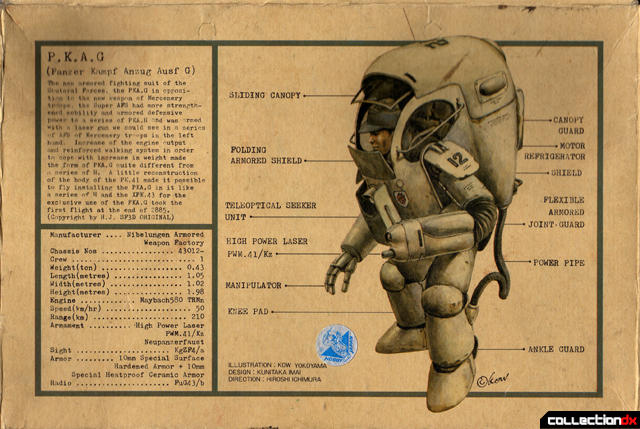 SF3D was originally created in the pages of Hobby Japan back in the early 1980’s by master modeler Kow Yokoyama, story editor Hiroshi Ichimura and graphic designer Kunitaka Imai. The scratch built model kits were produced in the odd 1:20 scale as it used old Microman figures as a base to build the armor around. Yow’s endless creativity for kit bashing a unique post apocalyptic WWII influenced combat armor designs and an oblique story line by Ichimura, created a huge cult of modelers for SF3D products. 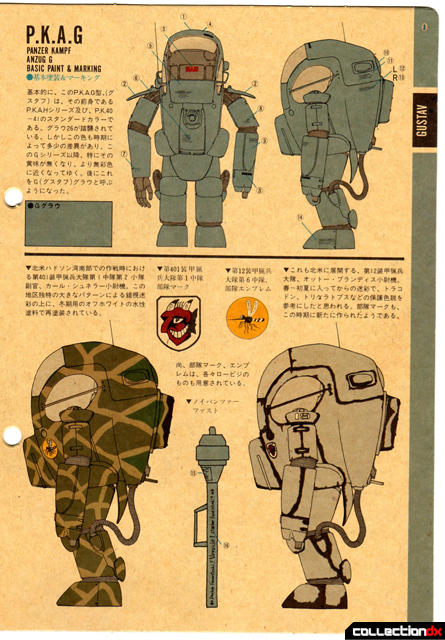 Fed by monthly SF3D dioramas and stories in the pages of Hobby Japan, demand for model kit versions of Kow’s designs led to the veteran Japanese toymaker Nitto to produce model kits of the designs directly from the pages of Hobby Japan. With Kow as one of the head designers, Nitto unwittingly produced the first ever multimedia highbrow model kits. High quality plastic, crisp molding, metal springs and tubing, mesh screens and colorful profile file cards and decals and mysterious non-discrete military style packaging and art design produced a model kit line that was light years ahead of even military model kit manufactures. 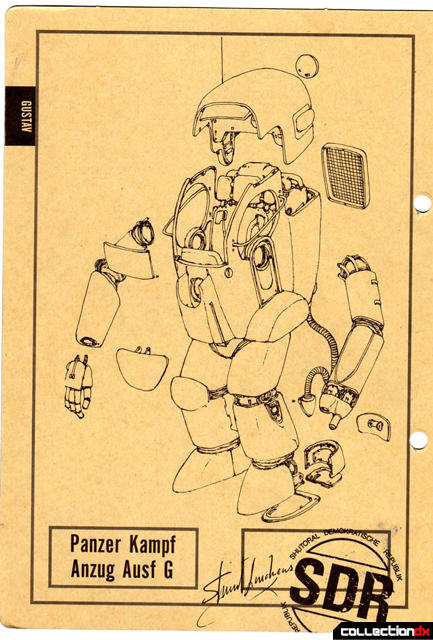 Sadly the line only lasted four short years when Nitto was ordered by Hobby Japan not to produce SF3D model kits and Kow was dismissed from his position Hobby Japan. This began over 10 years of litigation over the ownership of the SF3D that would not be resolved until the mid 1990’s. In the meantime Kow started Model Graphics and many SF3D fans began to wonder if SF3D would ever see the light of day again. 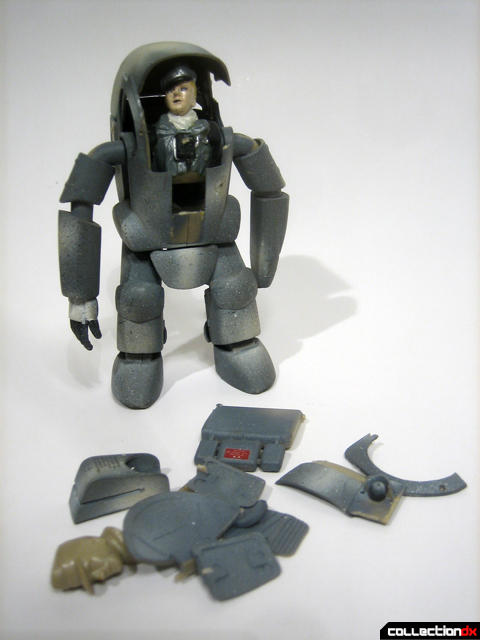 In the end Hobby Japan received ownership of the name, Nitto was able to keep the rights to the molds to the kits and Kow was allowed to produce SF3D style designs again under the his new brand name Maschinen Krieger, or Ma.K for short. Today new and reissued Kow designed Ma.K kits are produced by Waves, Nitto and Hasegawa with toys produced by Medicom and Hobby Base. Due to the kit bashing nature of SF3D many garage kit makers have produced many detail parts and highly limited edition SF3d/Ma.k inspired kits and figures. For the SF3D fan, things could not be better. 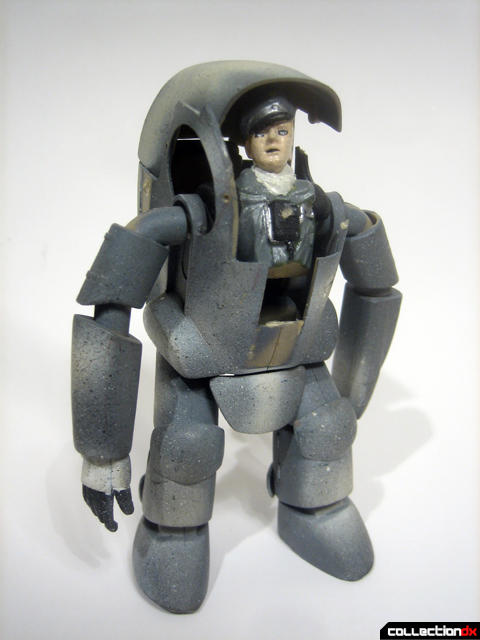 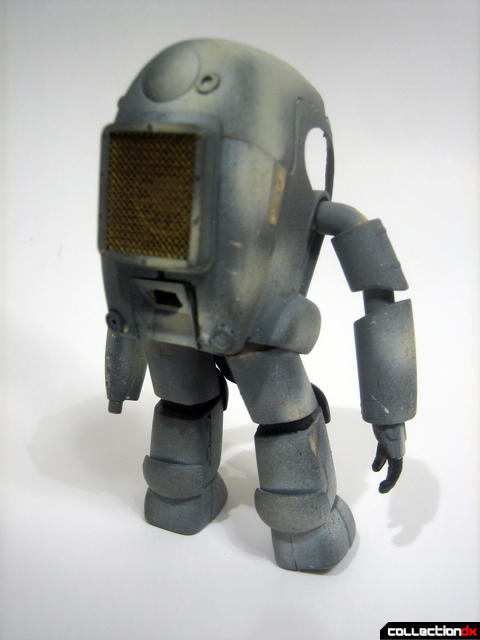 I bought this 1/20 Gustav at a kit swap meet in the 1980’s. These kits were extremely rare in the USA at the time as this was only time I ever saw an SF3D model kit for sale. I was later to acquire a Neospotter from Squadron Mail Order that I later sold on eBay in the 2000’s for quite a pretty sum of money.

In my kid mind, this was an important model kit. I never spent so much time filling seams and building kits like I did on Gustav. I “airbrushed” it with my Badger spray gun a snow camouflage scheme. It was good to know I saved many of the parts over the last 20 years but some parts I was never able to find. Luckily due to the kit bashing nature of SF3D kits there is no “wrong” way to build and paint SF3D kits, in fact it is encouraged by fellow SF3D/Ma.K fans to customize your kit to something personal and unique. 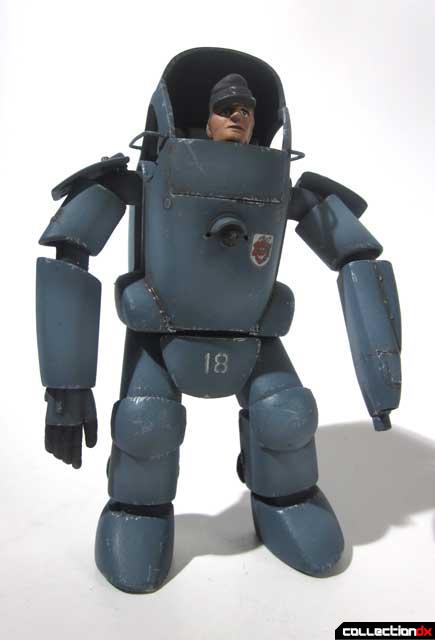 I took an inventory of parts I still had and parts that were missing. The missing parts are: The rear small vent, the leg spring hydraulic pipes and attachments, the clear dark brown side and cockpit windows, the side antenna and the grenade launcher. Most of the major parts were still there and I even still had the decals and I found the flattened box and profile card in one of my boxes. I also still had the option parts for an enlisted style head to swap out the officer style head that I originally used. 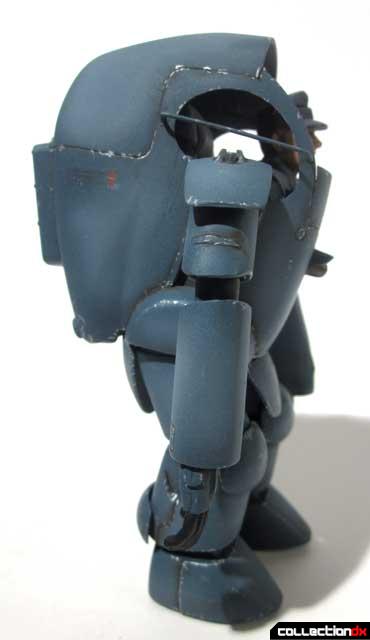 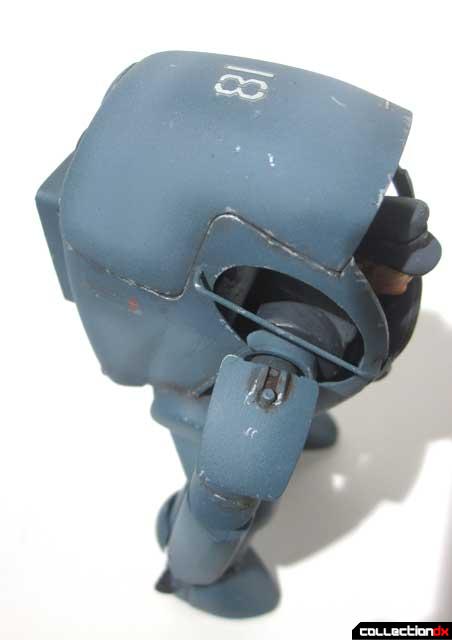 I carefully pried apart the body and stripped the paint off all the parts the best I could with spray oven cleaner. I applied the paint thick so it took a few sprays of oven cleaner before I was able to get most of the paint off. Like I said before I did a good job with filling the seams when I was a kid, so there was not that much seam clean up. I added a back wall to cockpit as it is seen in the file card but there is no such part included. A well-detailed gun is included but it cannot be seen as it is behind the seat. 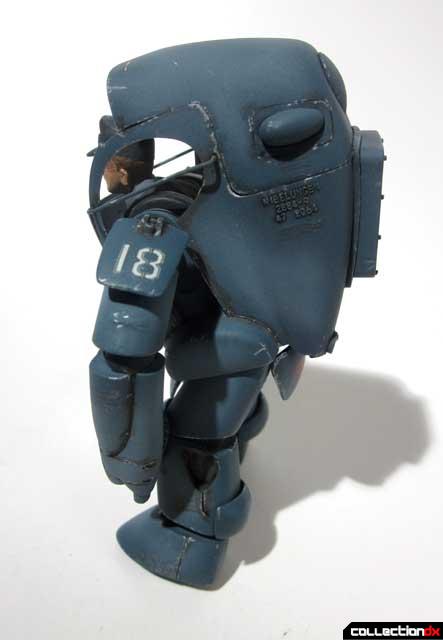 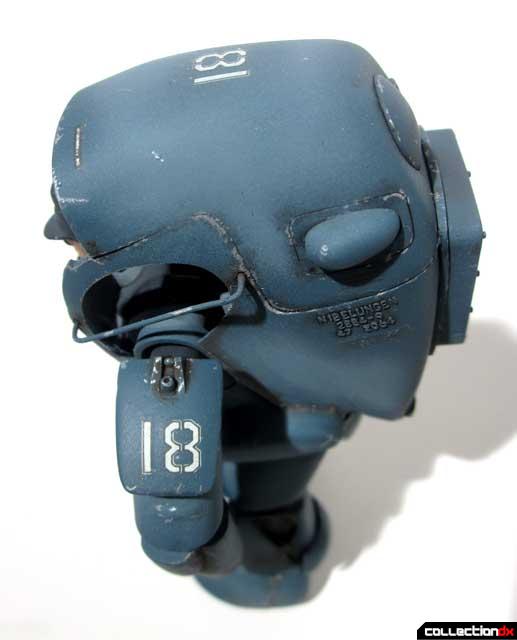 The quality of plastic that was used on these kits was impressive. While many plastic model kits from this era are very brittle, the plastic on these SF3D kits still holds up to the rigors of model building. Although I still had the part, I left the light cowling cover off the front of Gustav, as I liked the look of the smooth armor of the front plating. 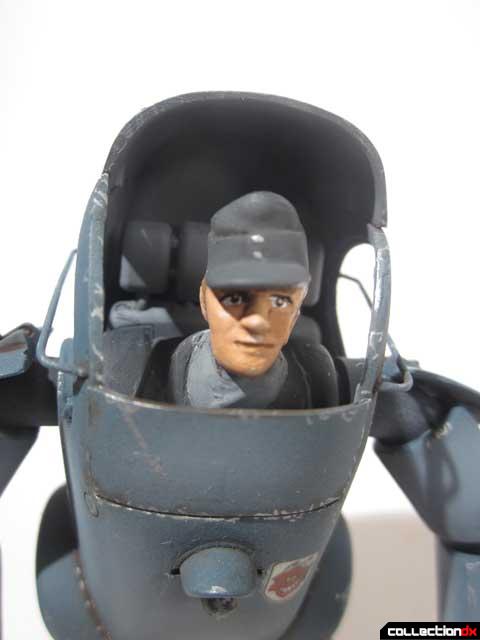 I am not a figure painter, which uses an entirely different technique that I am not familiar with. But figures are important in the SF3D world and to be honest this is perhaps the second time I attempted in painting a figure, the first time was when I originally made this kit in the 1980s! I am getting better, but my paint does not do the figure justice as the faces are well sculpted. Two heads are included, one with a German style overseas cap and another with a crusher type officers cap. 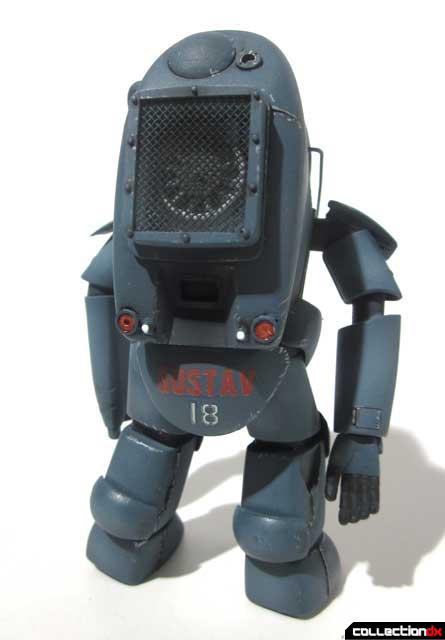 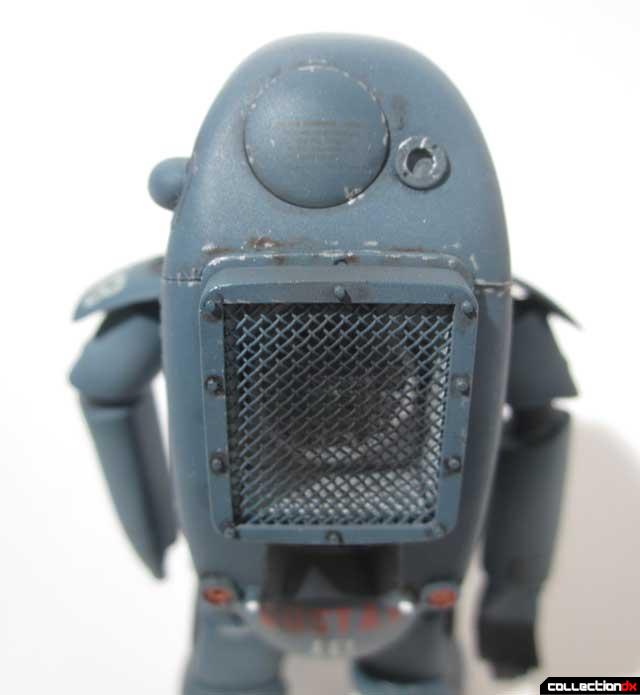 I painted the Gustav using Tamiya colors. There was an alternate blue color on the profile card that I liked for Gustav so I went with that scheme. After a coat of Testors gloss I applied the original decals onto the model kit. Some of these decals did not want to come off the backing paper and they appeared a bit opaque and difficult to hide the silvering once applied to the model. I believe it has more to do with how the decals were stored but I will not know for sure until I purchase an NOS SF3D kit. 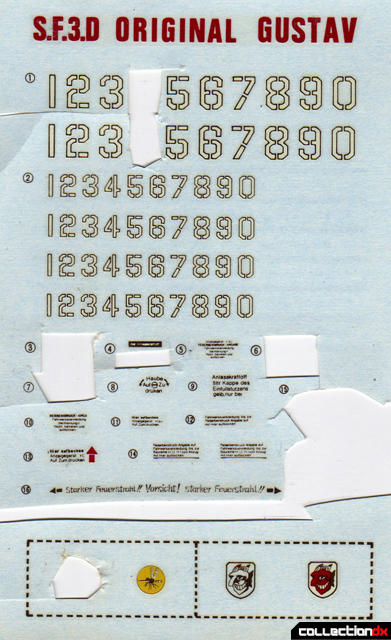 After a few Testors flat coats, I airbrushed some light shading throughout and weathered Gustav with my usual mixture of brown and black oil paints and finally ended with a silver pencil for chips and wear in the paint. I airbrushed the vents on the back for exhaust realism, the kit’s beautiful brass mesh screen accenting the technique. Although the figure is small it does weigh a lot for its size as it has two hefty lead weights in the feet to keep Gustav balanced and does not feel like your typical model kit when finished. 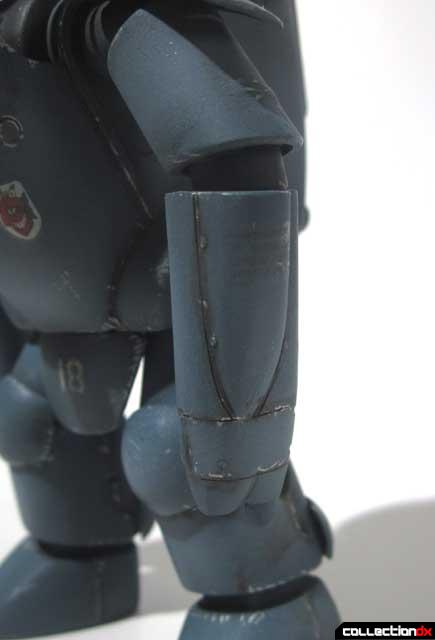 I only have two disappointments with this kit. I wish the arms moved at a 45-degree angle at the elbow. To make the gun face forward the entire arm has to be elevated up. Most SF3D/Ma.K modelers make these kits as non-moveable and scratch build the kits with the arms properly facing up. Second it would have been great if the legs could be removed for ease of painting. The way it is assembled you cannot take the legs off for painting and it is easy to miss sections while airbrushing. 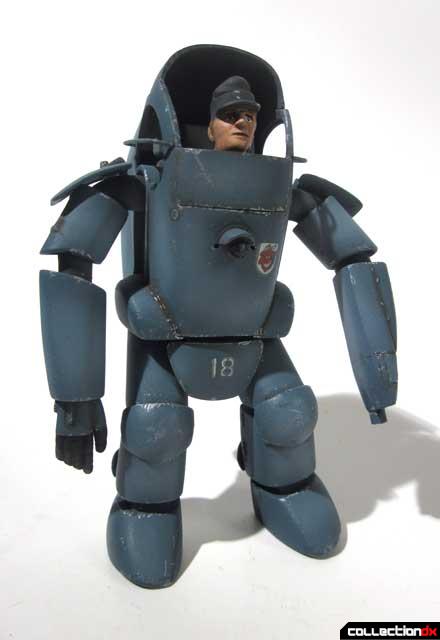 Otherwise this is still one beautiful kit. It looks great on the display shelf and the design is still timeless. It is also great to finally build the Gustav I always wanted to build, off my original kit I built in the 1980’s no less. Rebuilding Gustav had rekindled my burning love for SF3D kits and with Ma.K kits readily available to all, be prepared for many SF3D/ Ma.K kit reviews on CollectionDX.

©2010 Article and pictures by Leonardo Flores and CollectionDX

Nice to see some Ma.K love here... I always loved this line, and my limited model skills always prevented me from dropping the big bucks on these back in the 90's.

I wish someone would get it together and do super-poseable figures of these designs.

A few months ago a friend of mine brought his entire collection of unbuilt Ma.K and SF3D kits to our IPMS meeting. Just amazing kits, I especially love the new Waves kits and Hasegawa seems to be putting some great vehicles out as well. I also dig on the Halloween Ma.K figures. I think Waves did a full 1/20 limited edition of the Snowman.

To give a salute to its kit bashing origins, Takara should do Microman Ma.K toys. Because there is essentially no story or canon to weight it down, who knows the possibilities of what could be released. I really need to do a Hobby Link Japan order soon.

With only 21 original SF3D kits made, I think I might try to collect a complete set.

That would be awesome... I wish someone would do full-on toys of these.

I think the newer Wave and Hagesawa's have moveable joints... this is like Spiral Zone, you just can't find any info about these out there in English!

Restoring old collector Buildup kits has been part of my kitbuilding hobby activities since I got into Aurora's Prehistoric Scenes over a decade ago. I've found that oven cleaners can damage some plastic parts, migrate paint dyes into plastics, and is overall rather difficult to work with. A less dangerous alternative you might cnsider is SIMPLE GREEN in its concentrated for, or a similar cleaner available at Dollar Tree stores that is called "LA's Awesome", also in a concentrate form.

I've dropped painted plastic parts in a glass or small bowl of either of these cleaners, stirred them around a bit and watched the paint break up off of the parts in moments. Scrubbing with a toothbrush helps the leftover parts. It only takes minutes. And the simple act of rinsing the cleaner off of the parts provides the additional washing & surface prep the part would need anyway. Even better, if the cleaner isn't that contaminated with paint flakes you can just bottle it and re-use it.