A contraction of "Popy" and "Mini-car", the Popynica (or sometimes "Popinicar") line of toys was Popy's series of die-cast toys of the many strange vehicles that populated the various anime shows that they drew many of their licensed products from. I never really paid much attention to this line in my earlier collecting years since I was focused primarily on upright robots. But in recent years, I've decided to start focusing more on toys from shows or toy lines that I enjoyed as a child, regardless of what form they may take. With that in mind, I finally took the plunge into Popynica territory with this pristine example of the Dragun vehicle from Getter Robot G, known to me as a child as the "Star Dragun" from Starvengers, one of the mainstays of Force Five." 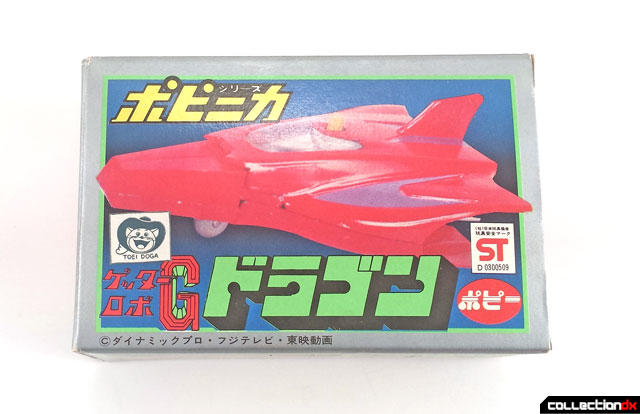 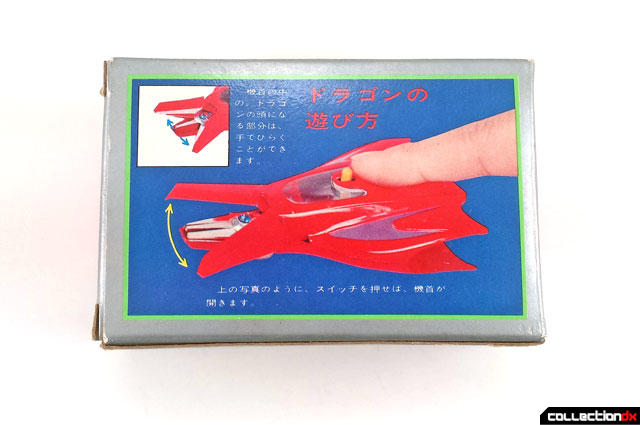 The sides show only text. 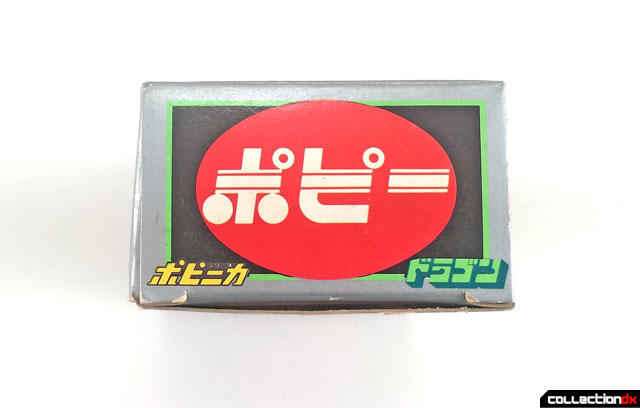 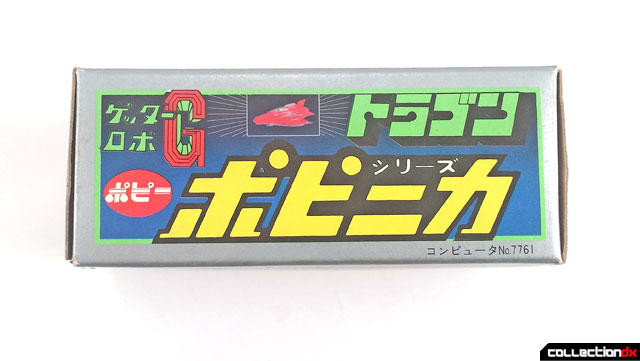 Inside the box, the toy is wrapped in a foam pad. A Popy catalog showing others in the Popynica line, as well as various die-cast character toys.

The ship itself is a little more than 3" long and is made primarily of die-cast metal. The only parts that are not metal are the nose, the cockpit canopy and the engine exhausts, which are plastic, tinted clear plastic and chrome respectively. Stickers provide detailing along the top of the vehicle. 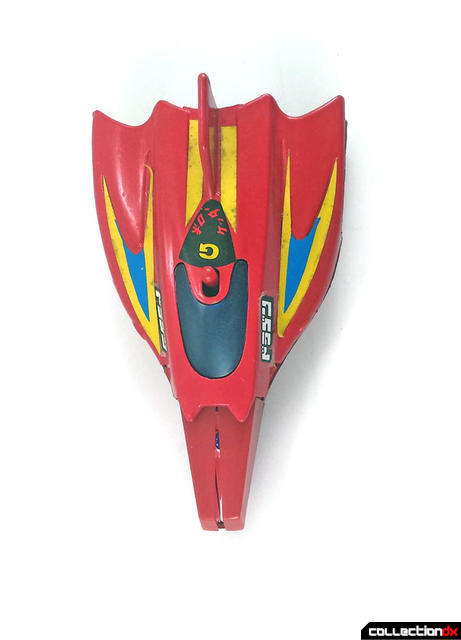 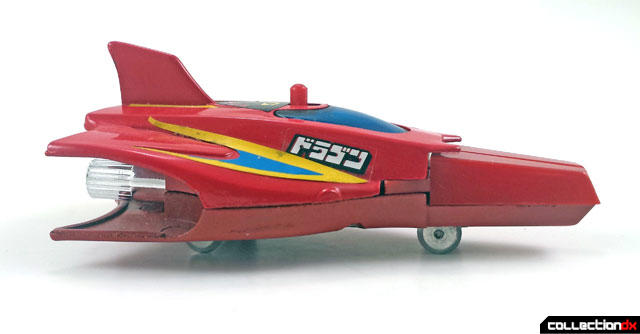 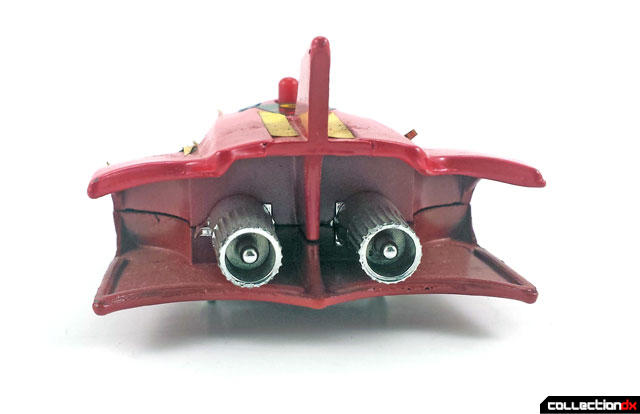 The reason that the entire length of the ship isn't metal is because the front part features a gimmick. If you press the button on the top of the hull, the nose splits open. I know this can be used to represent the final stages of forming the Getter Dragon robot, but I'm not sure if there was another attack mode in vehicle form that this might depict. Either way, it isn't a feature that excites me very much so I would probably have preferred a featureless toy with pure die-cast content throughout, rather than one with an unsightly gap. 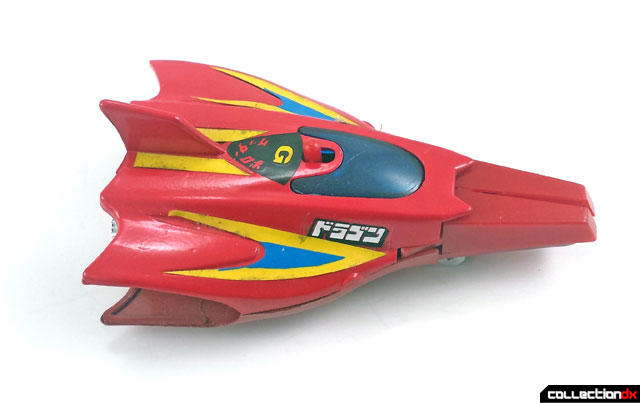 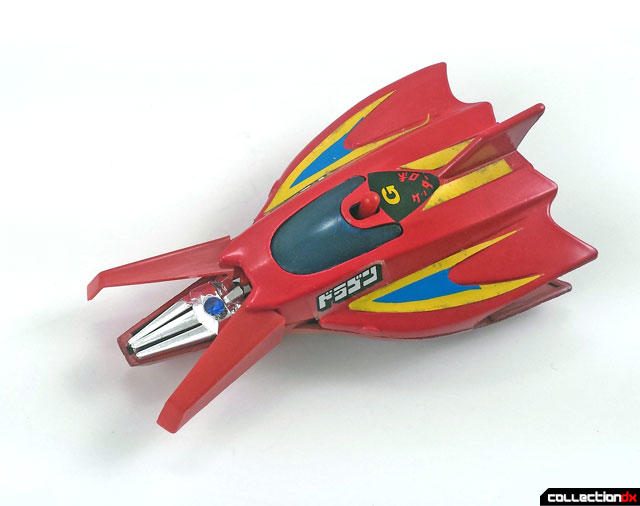 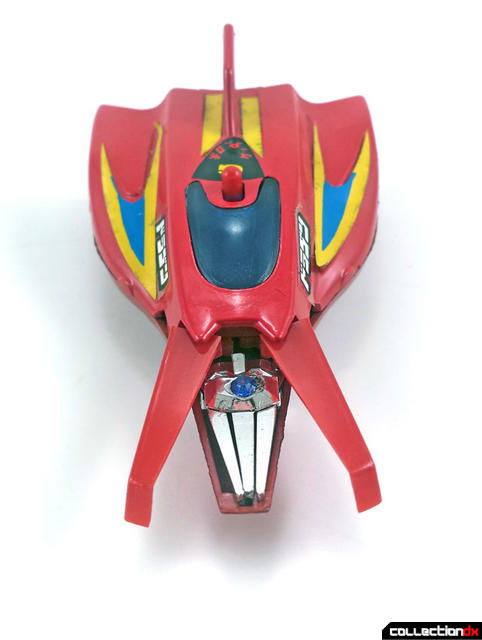 Still, I'm happy to have a vintage representation of this iconic ship from the show and any disappointment that I may have with this toy is more than compensated for in it's partner vehicles, Liger and Poseidon.

FYI, the silver points on the tip can spread out as well, if I recall correctly.

You're right, they do. I think I just couldn't get my finger in enough to move it and didn't want to force it when I took those pictures.. I just used a little blade to get into between the tips though. Looks better, but would still prefer a completely die-cast front though.