In Epic 09- “Gotcha! Gosei Girls”, after Eri (Gosei Pink) and Mouna (Gosei Yellow) learn to appreciate each other’s traits and weaknesses in order to find the three male Goseiger, Eri is able to retrieve a new Gosei Card which will summon the three Headers known collectively as the Skick Brothers- Taka, Crow, and Ptera. After using the specialized traits of each one with Gosei Pink’s Gosei Blaster, later in the scaled-up battle, the two female Goseiger used the Skick Brothers to form Skick Gosei Great. 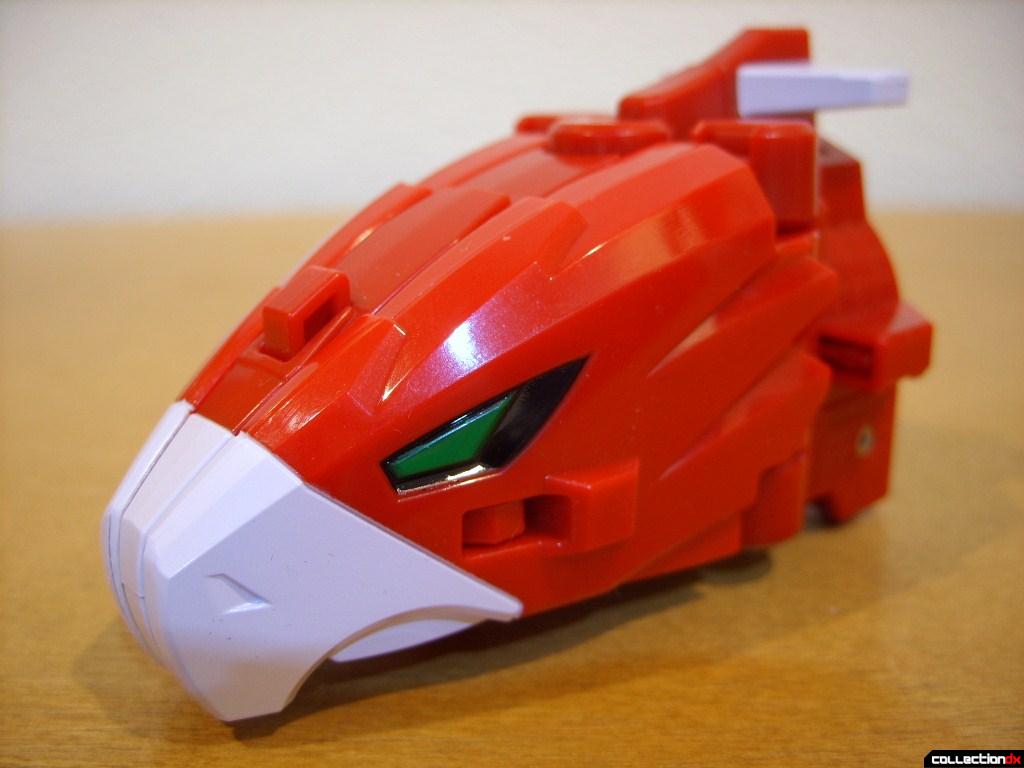 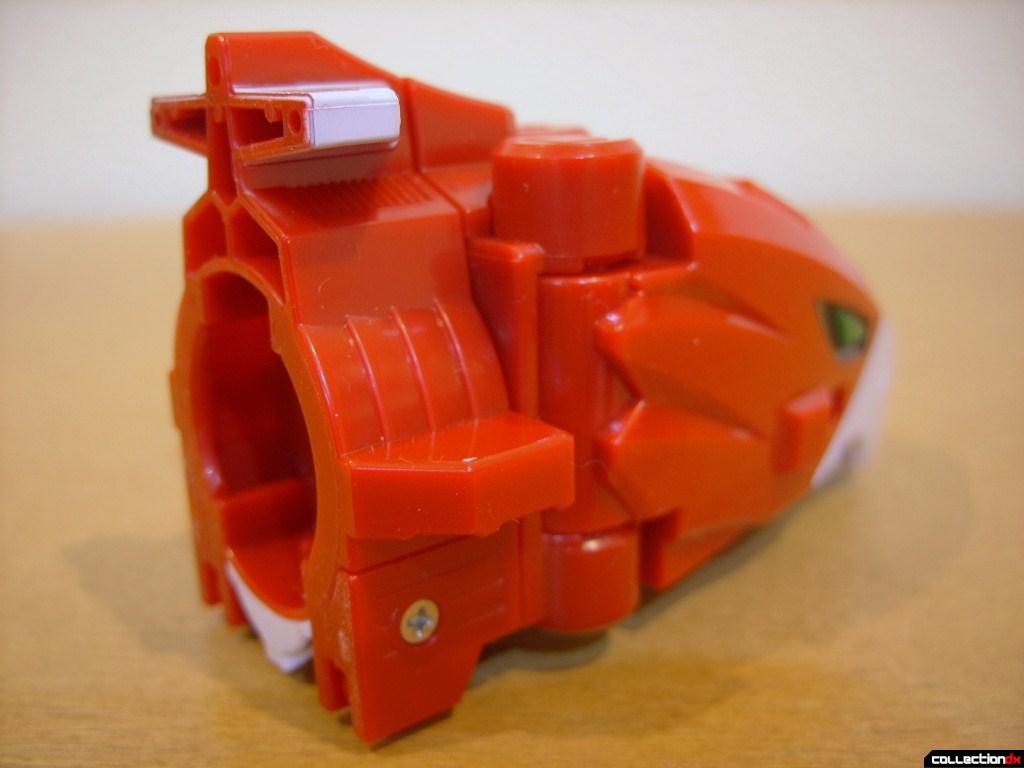 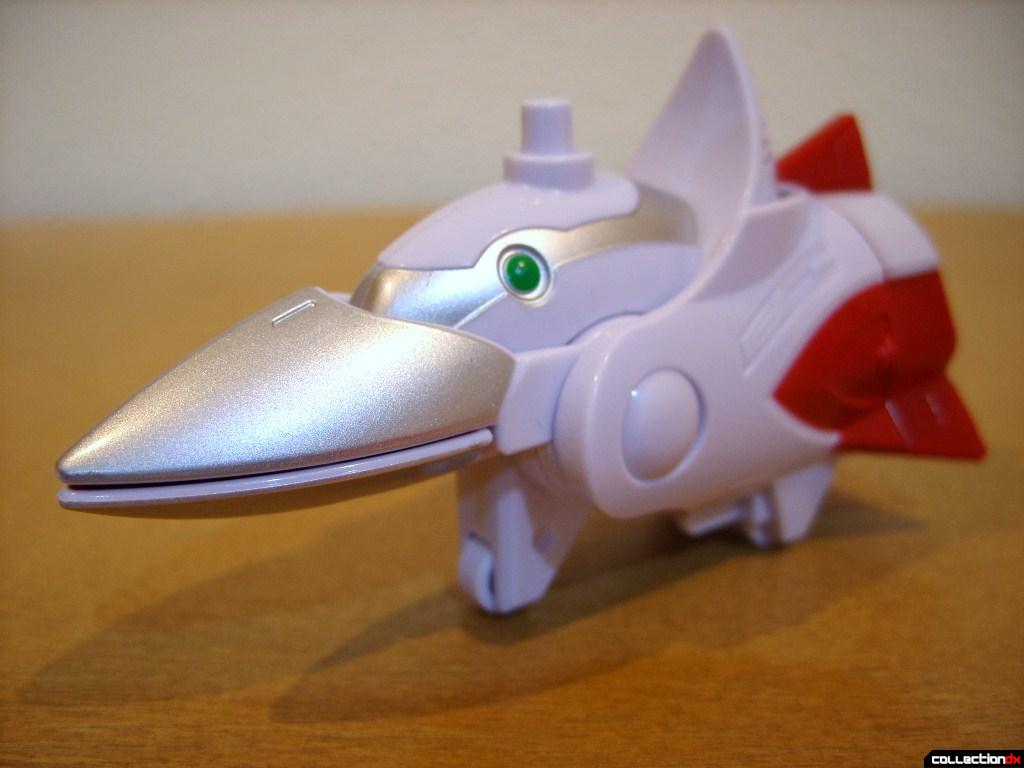 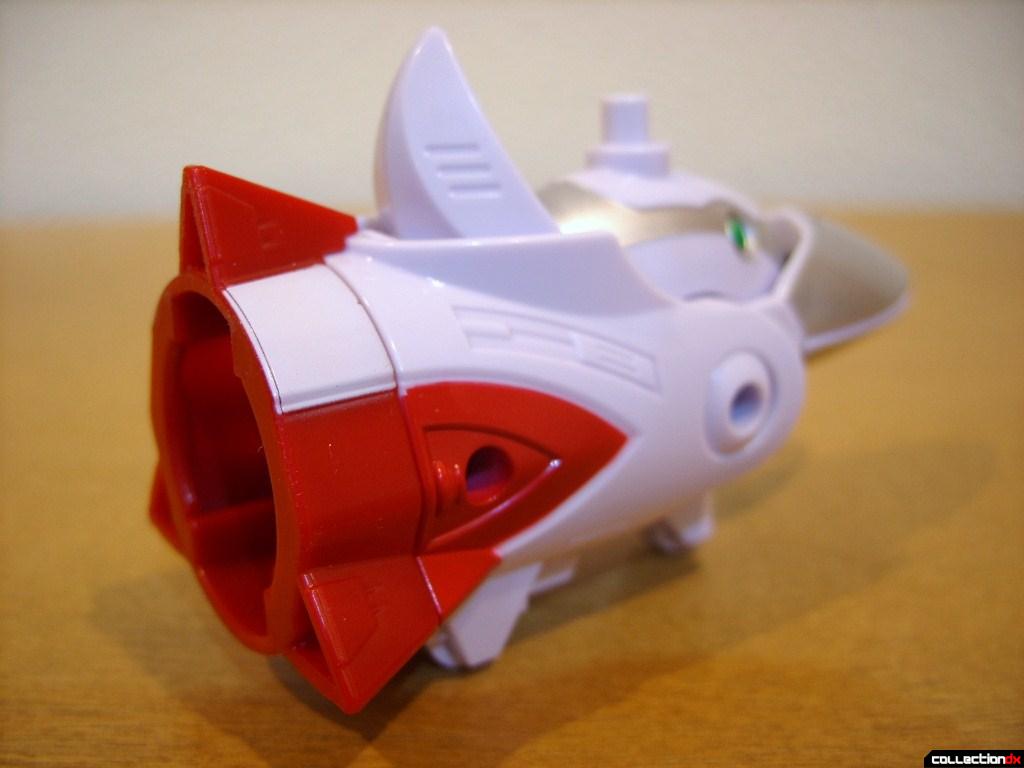 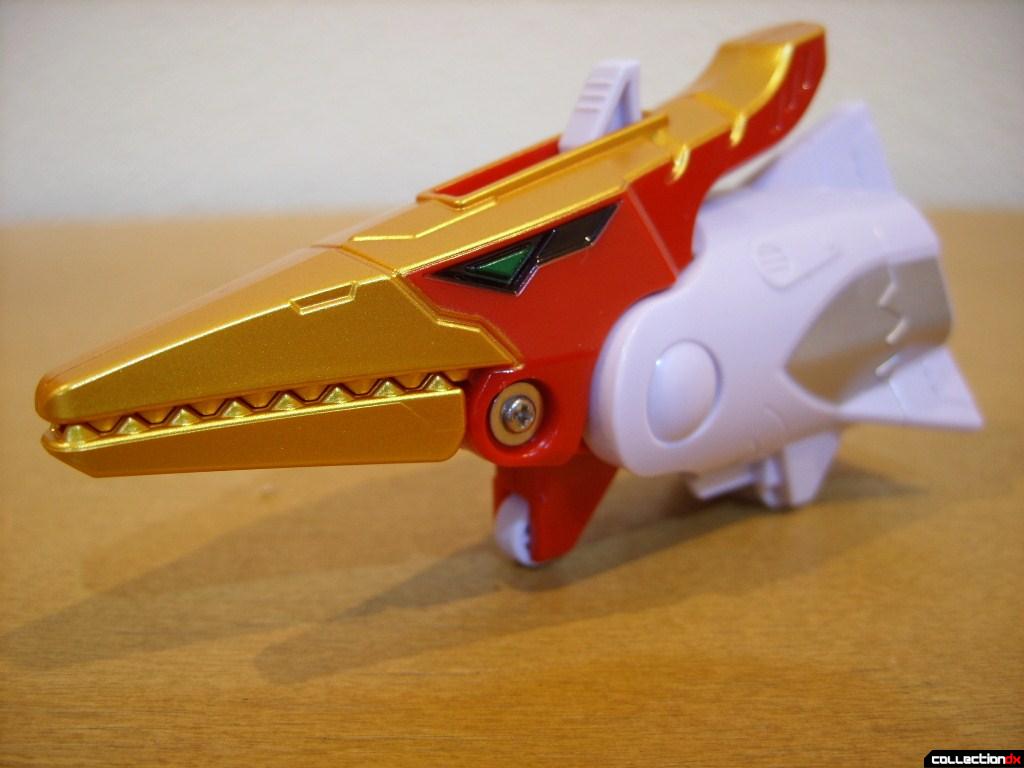 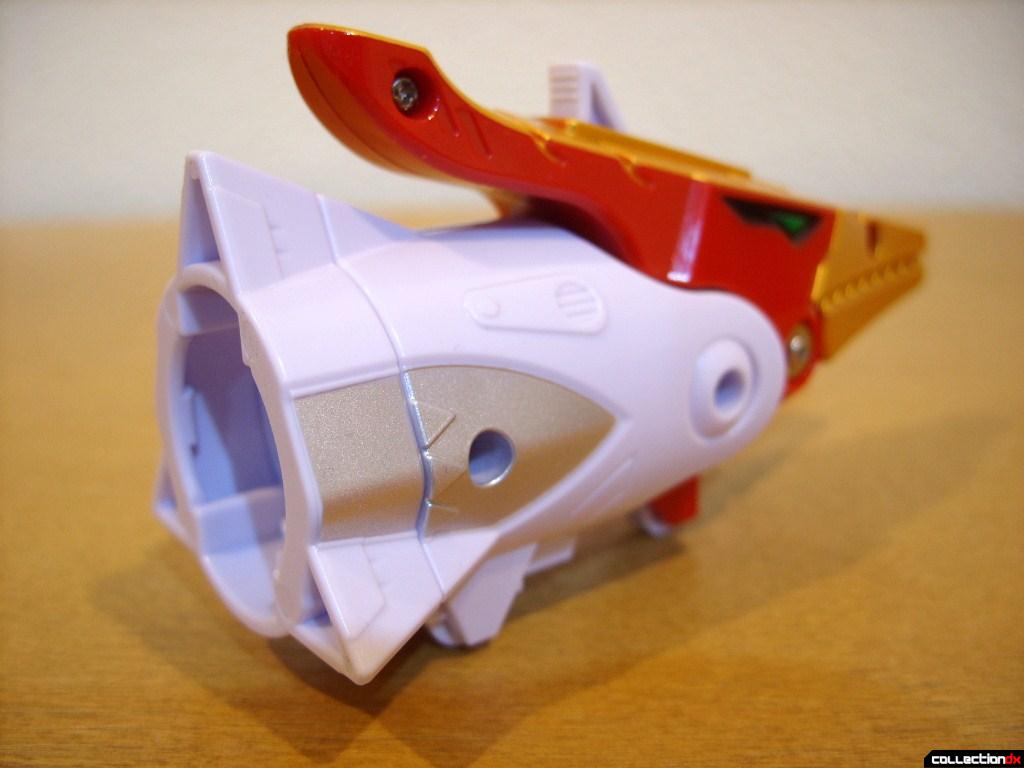 Each of the Skick Brothers has three ABS wheels on the bottom. Crow and Ptera can open their mouths via buttons on the top of their heads, which reveals small blaster barrels inside their mouths (though these are primarily utilized when combined with Gosei Great, see below). While usually of giant proportions far larger than a human, a summoned Header can also attach to the barrel of a Gosei Blaster, which increases its destructive power.

A single Gosei Card is provided, which can be used with the Gosei Power Kaihoki Tensouder. 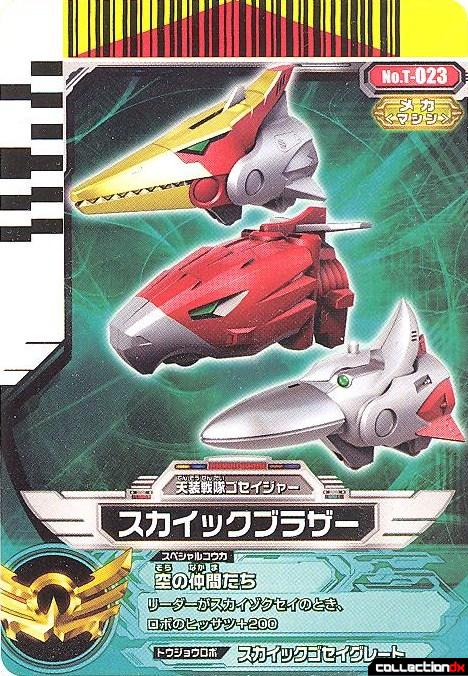 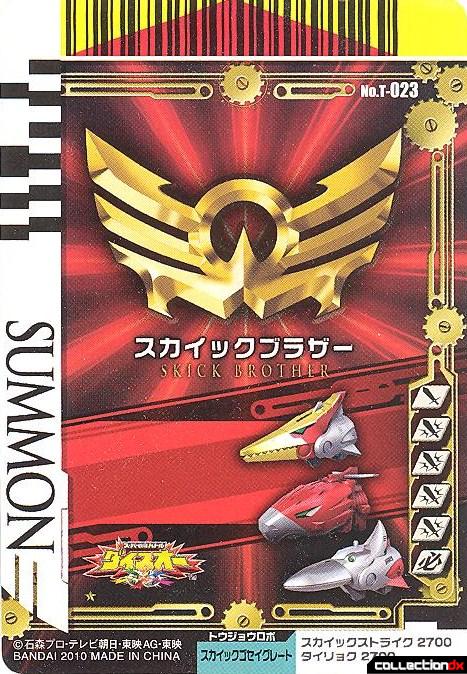 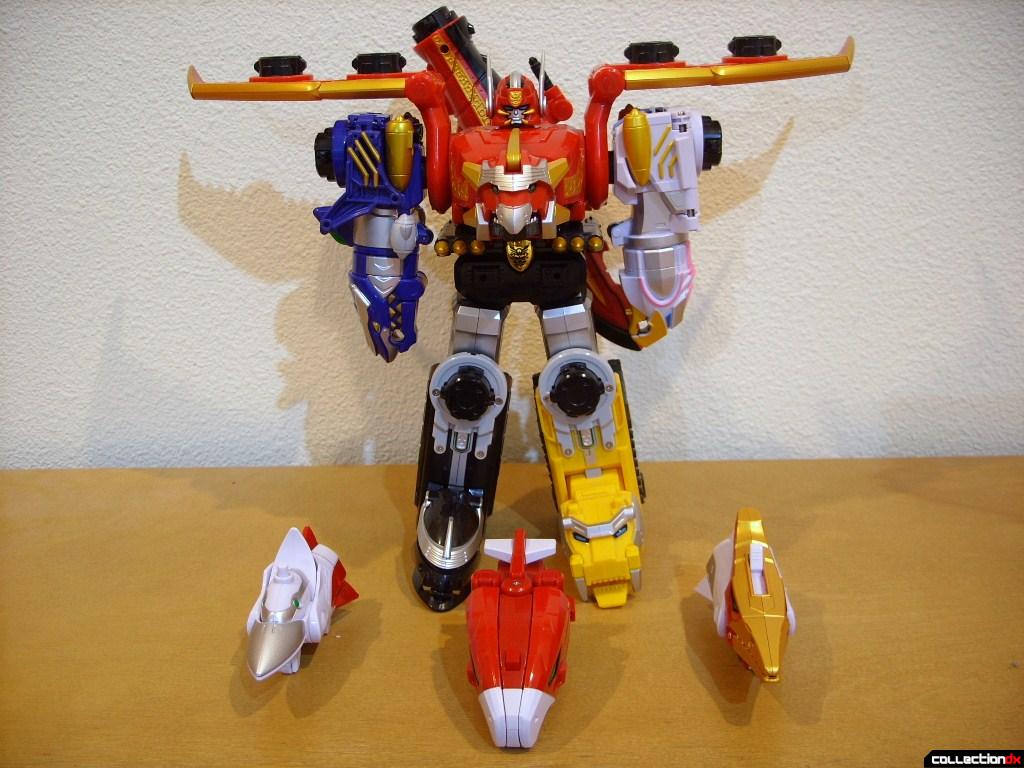 Skick Gosei Great’s unique attack is the Skick Sonic Boom (an energy blast from each Brother’s mouth), and its finisher is the aerial Skick Strike (the energized combo flies into the air and impales itself into the enemy). 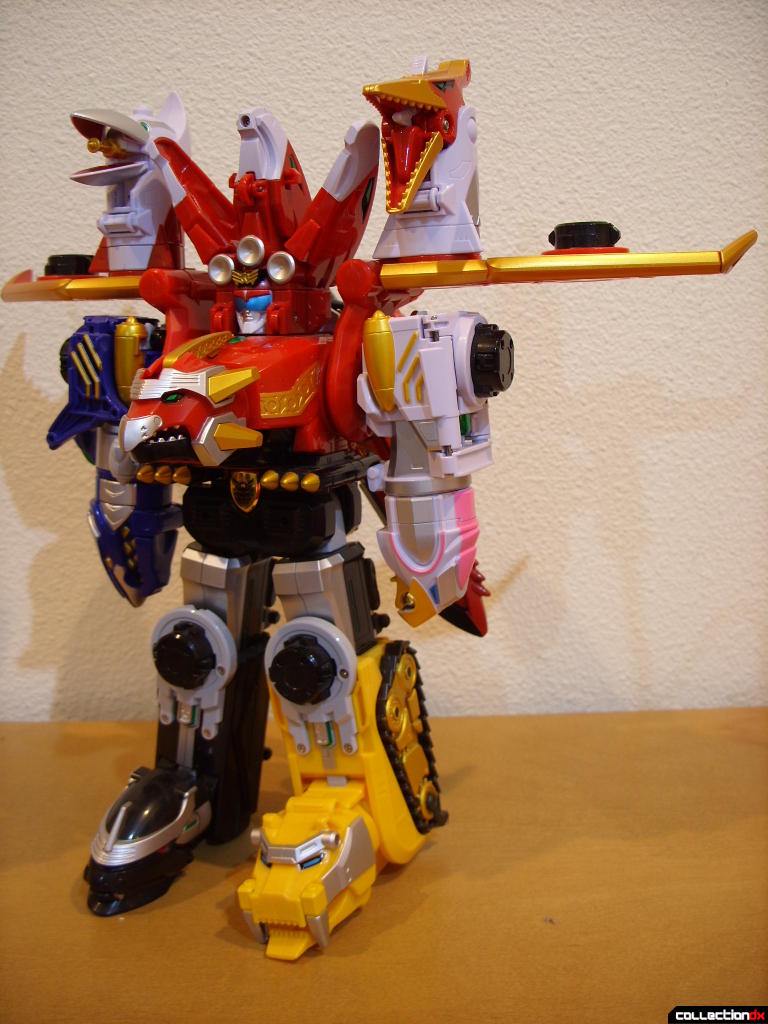 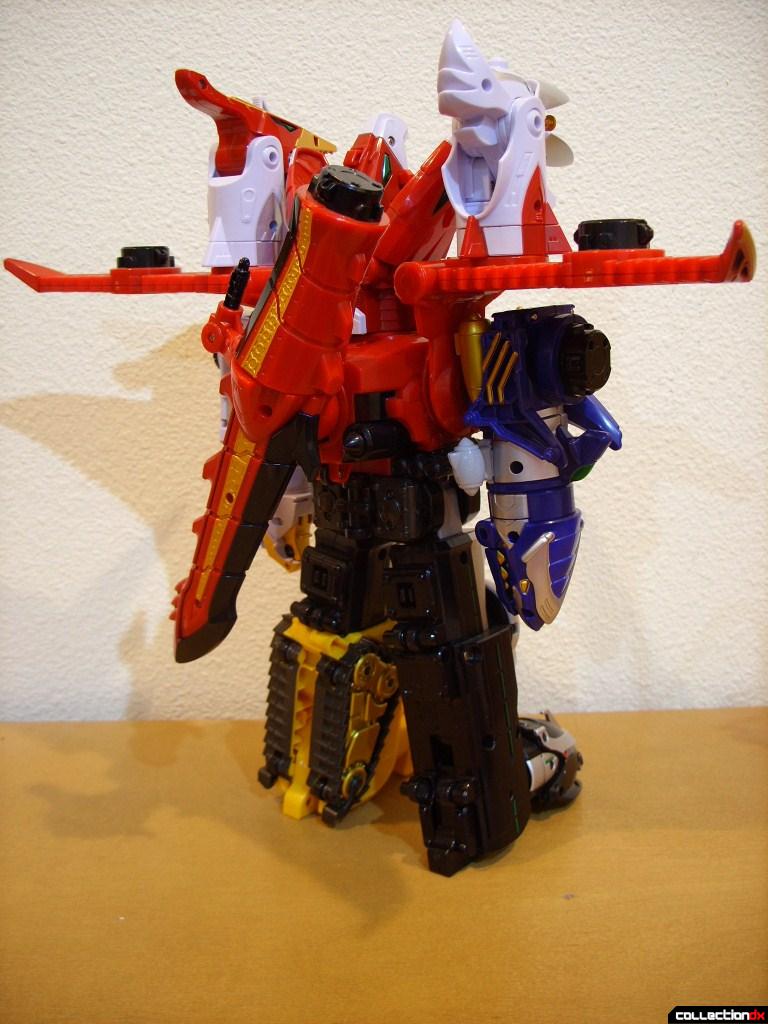 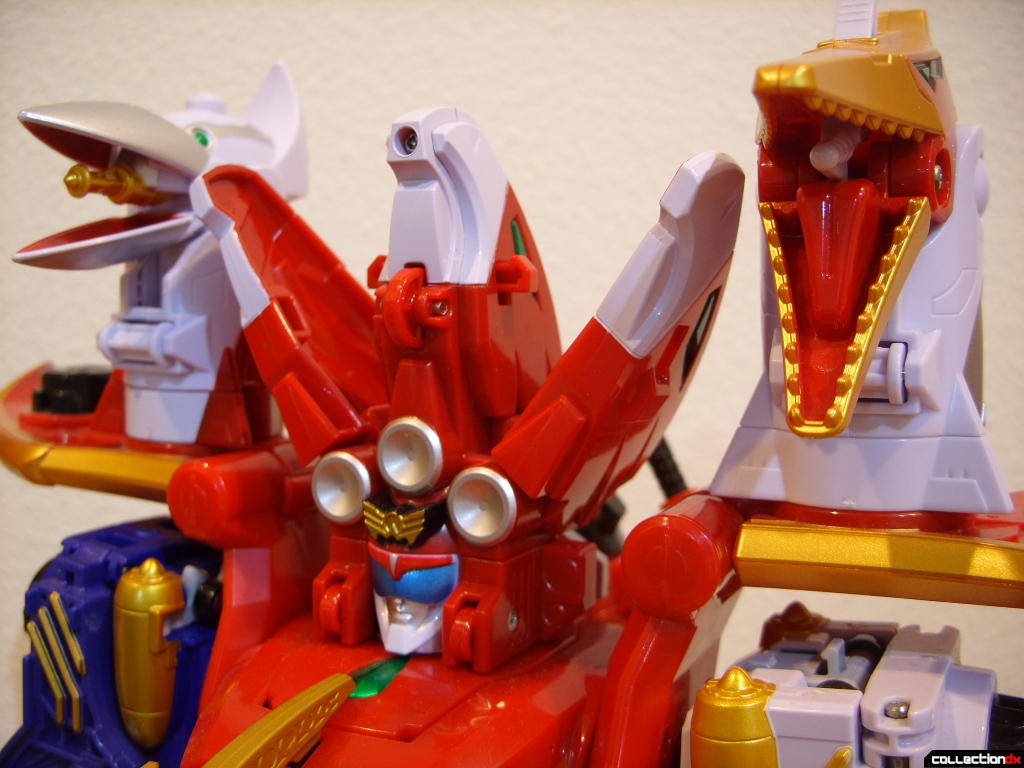 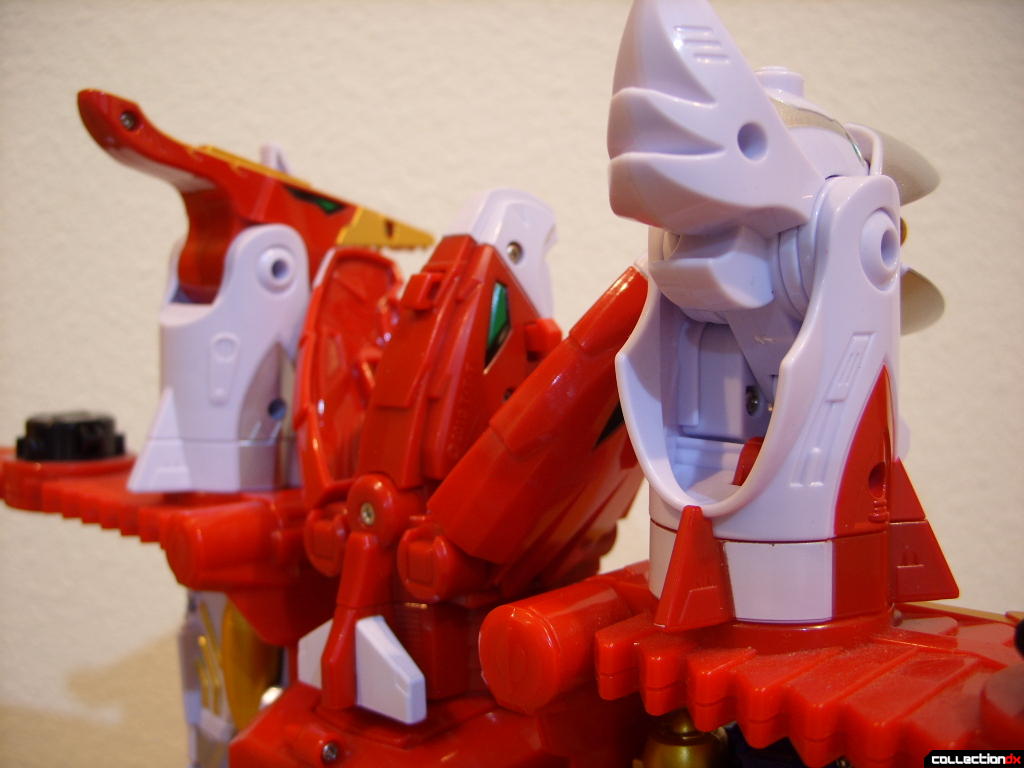 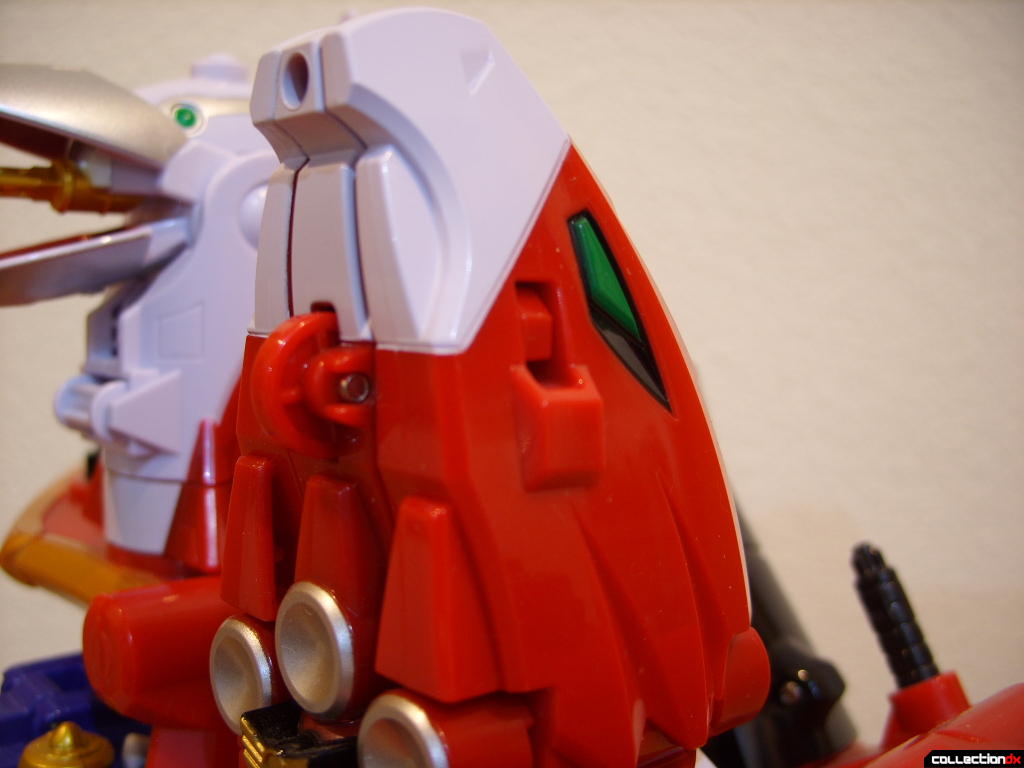 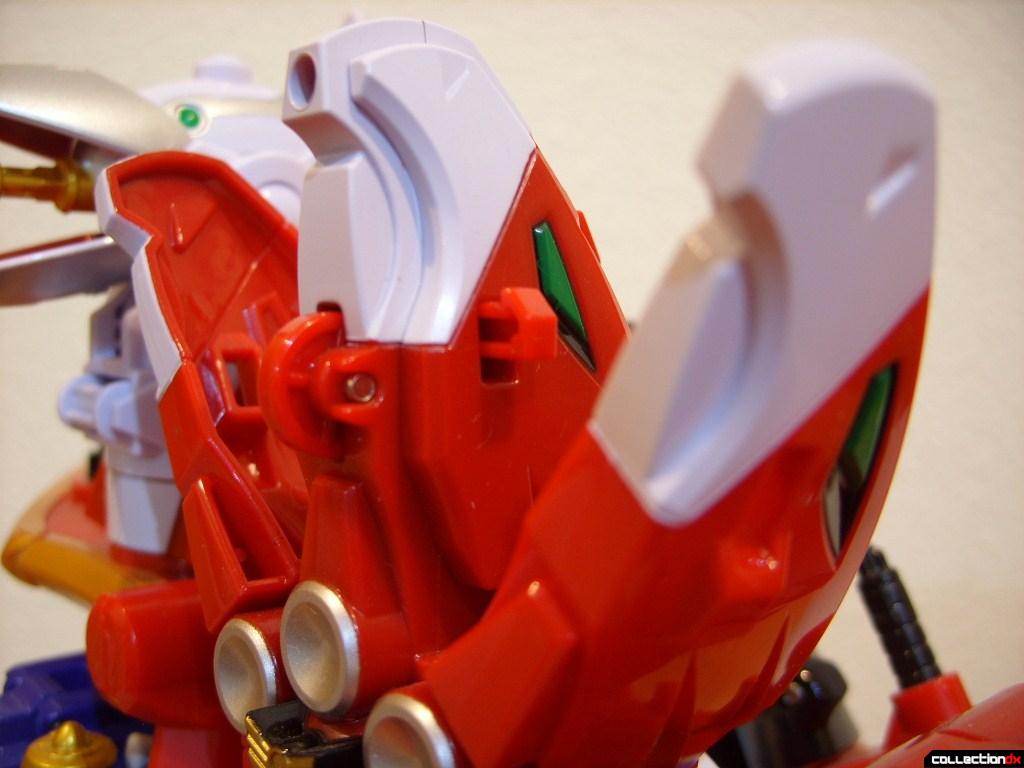 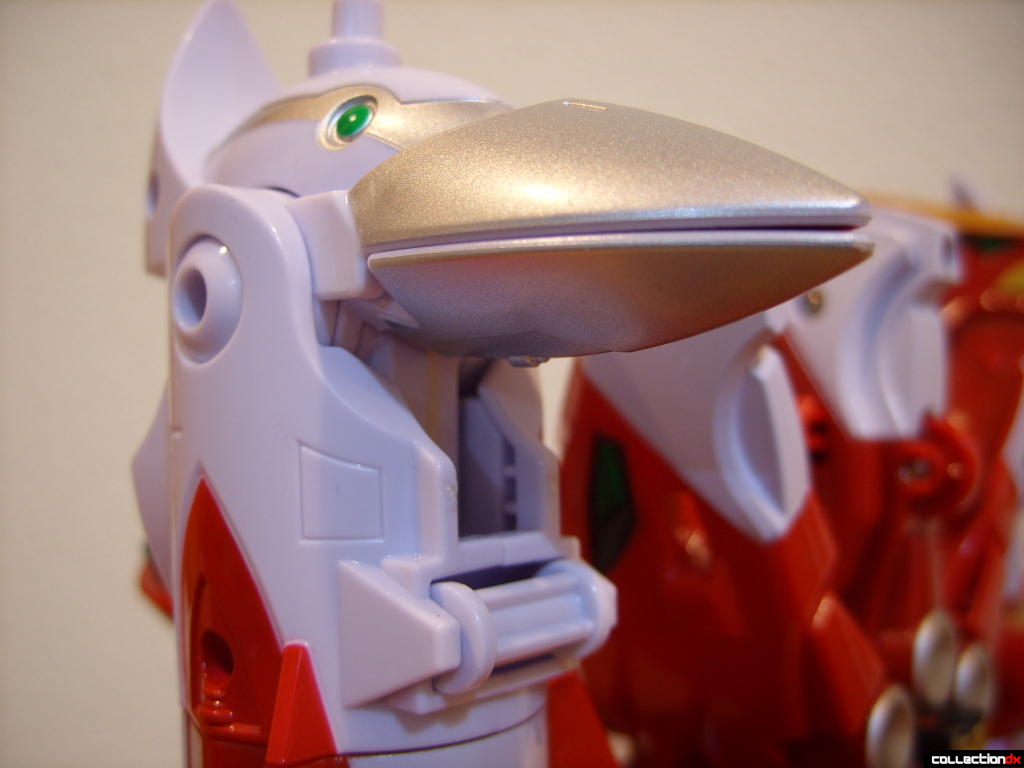 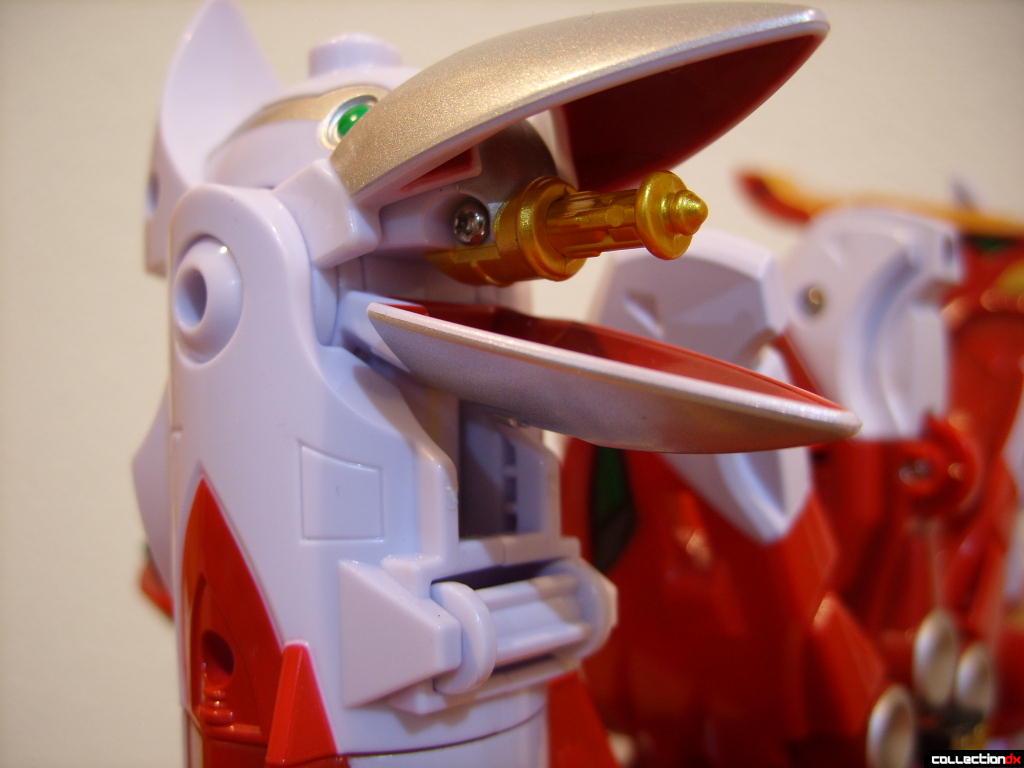 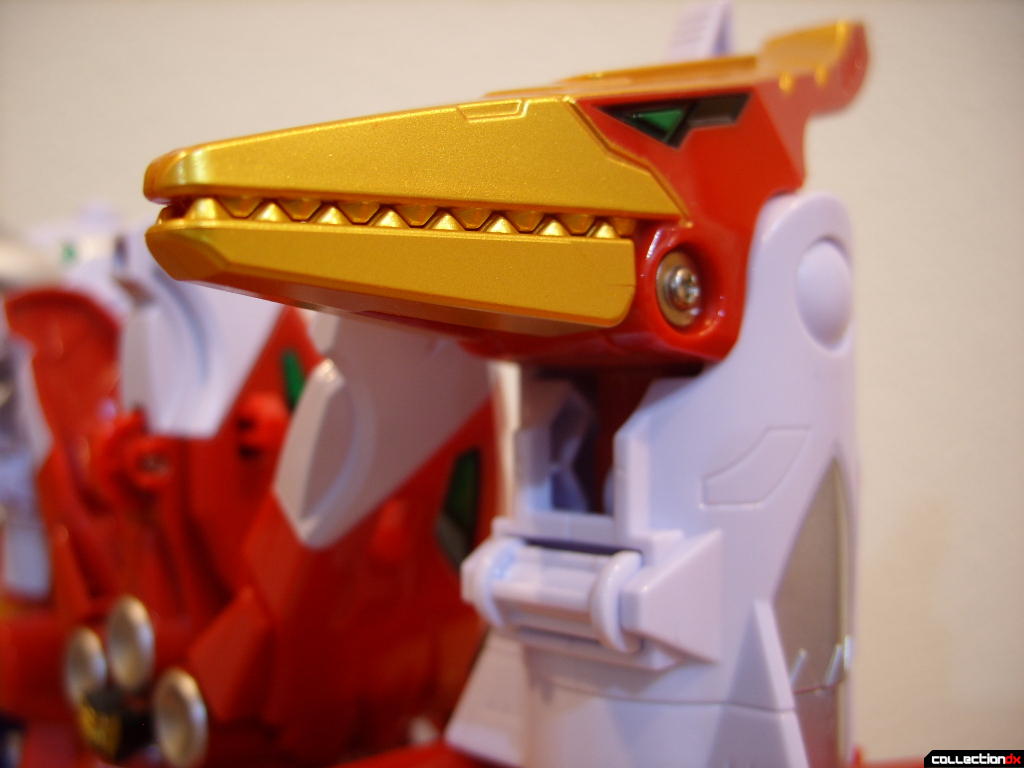 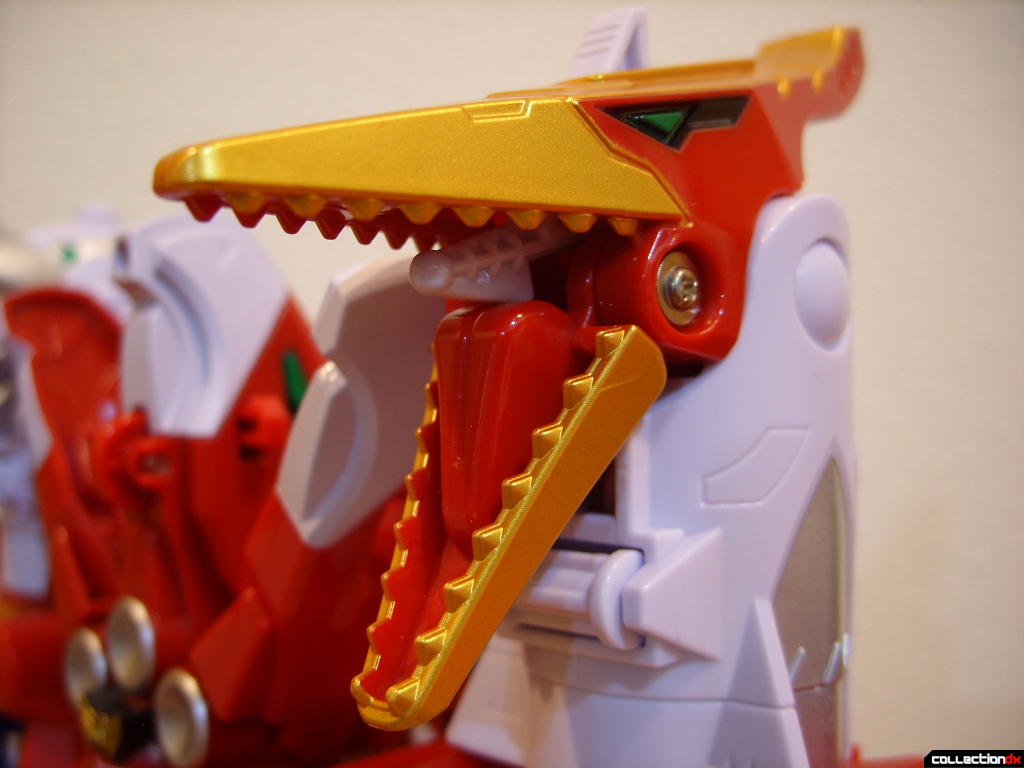 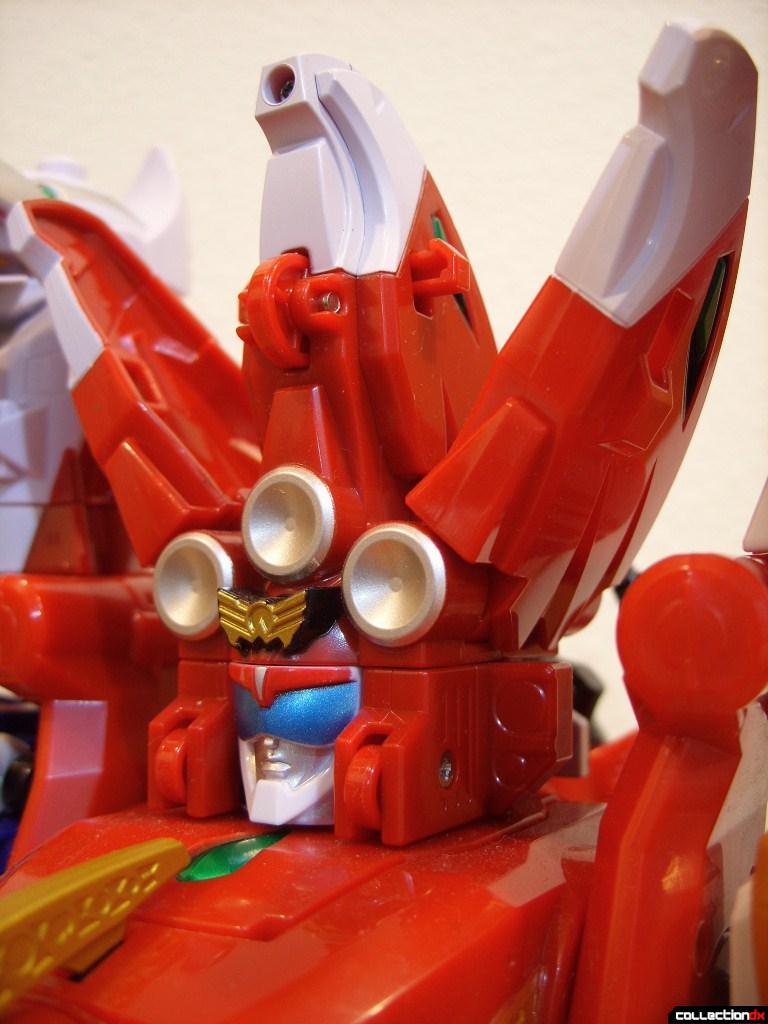 Paint applications. Selection of materials. Structural integrity. Flexibility of joints and connection points. These are all things that you never hear about from me. Why? Because they are always done well for a Super Sentai DX robo toy. These are reliable standards which [almost] never falter. 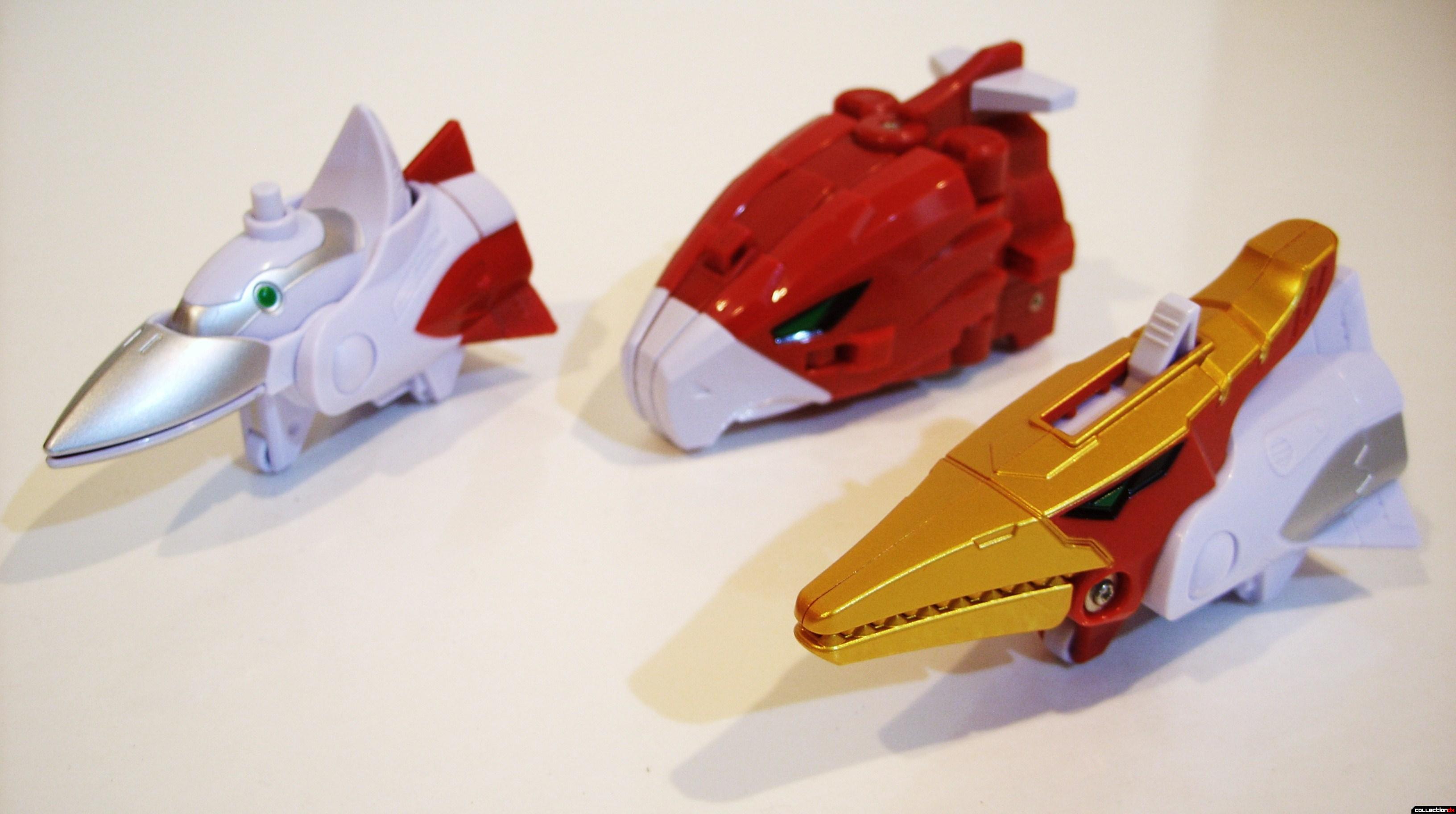 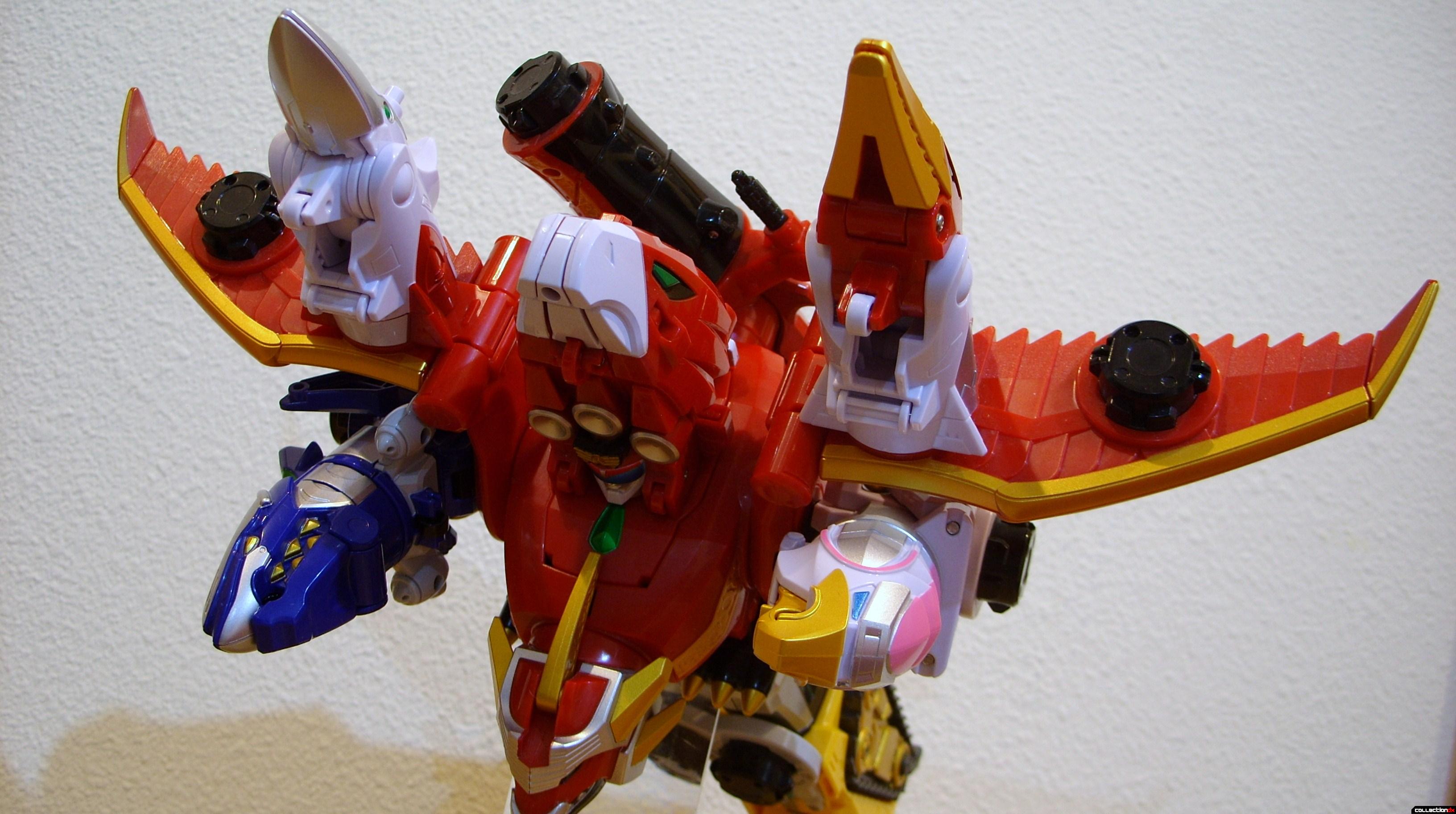 The only reasons I got this set was because I needed a representation of one of the accessory sets to demonstrate on CollectionDX (admittedly, a bad habit I’ve picked up); and it was the only one of the five that I found somewhat tolerable. The distinct difference between these Headers and the ones on the DX Gosei Great is that each one actually does something, even though they have no bodies individually. Otherwise, this is just another opportunity to fill your shelves with anonymous animal-mecha heads. Be careful in rolling these Headers around, though, as they don’t balance very well on their wheels and are rather top-heavy. You can take what you wish from attaching each one to the Gosei Blaster (although, in my opinion, admittedly they look better than any other Headers when this is done), But all that they do for Skick Gosei Great is create a new larger helmet and some smallish over-the-shoulder cannons. (They didn’t even bother trying to hide the combo’s face underneath Taka, which really pissed me off-!) Assuming that you’ve got a DX Gosei Great, and then enjoy the Header-swapping gimmick, then the Tensou Gattai Series 03- Skick Brothers Set may not be too bad an addition.

This toy is just...not right. Garish in the bad way, complicated in an ugly way. All the ideas that I see at work are good, though: lots of accessories, heads with lasers in the mouths...the execution just falls flat. And what is with that sword? I'm no swordsman, but generally speaking, having a handle as big as the blade is pretty cumbersome. I know that brave yuusha had a giant sword that interfaced with another robot in the same way, but that was completely awesome.

Oh, and don't forget about Cloud's giant blades in "FFVII" (which I never played but are famous in figures).

But, yeah, the Gosei Machines fall flat on their over-exposed faces.

I haven't collected any of the toys,but I've watched a couple episodes of the show,and it is awesome!

In the past, if I wasn't thrilled with the toy line, I could still watch the show. But this time the toys are such a put-off that it's influencing my opinion of the show, and I just can't bring myself to watch it.

I see total fail on all aspects of this toy. Bad gimmick, bad design. Yup, it's a total clustercrap.

Wait 'til you see what I have to say about Gosei Ground...

Only things I see that are decent about GoseiGround are the "Headmaster" and the sheer size of the lion... Honestly I wouldn't be surprised if that thing gets a bad review.

Oh. Right. Sorry, this is for the Skick brothers. Not exactly a fan of the headder gimmick overrall, but if I did have to pick one, I would have gone with the Seaick Brothers, mainly because I love the idea of Pirate Robots (C'mon Gokaiger...) such as Captain Shark.

I need to see their Ultimate clustercrap formation so I can laugh at its sheer and utter stupid design the whole day.

So far as I am aware, we aren't getting any more mecha, so Ultimate Gosei Great may be the final combo in the series... an appropriately disappointing end to a disappointing year, if I do say so myself.

I've had the opposite problem with Goseiger. I haven't really enjoyed the show, especially after how much I loved Shinkenger, so the toys have lost a lot of interest for me.

I like the "Taka Header" helmet, reminds me of the Shogun Megazord.